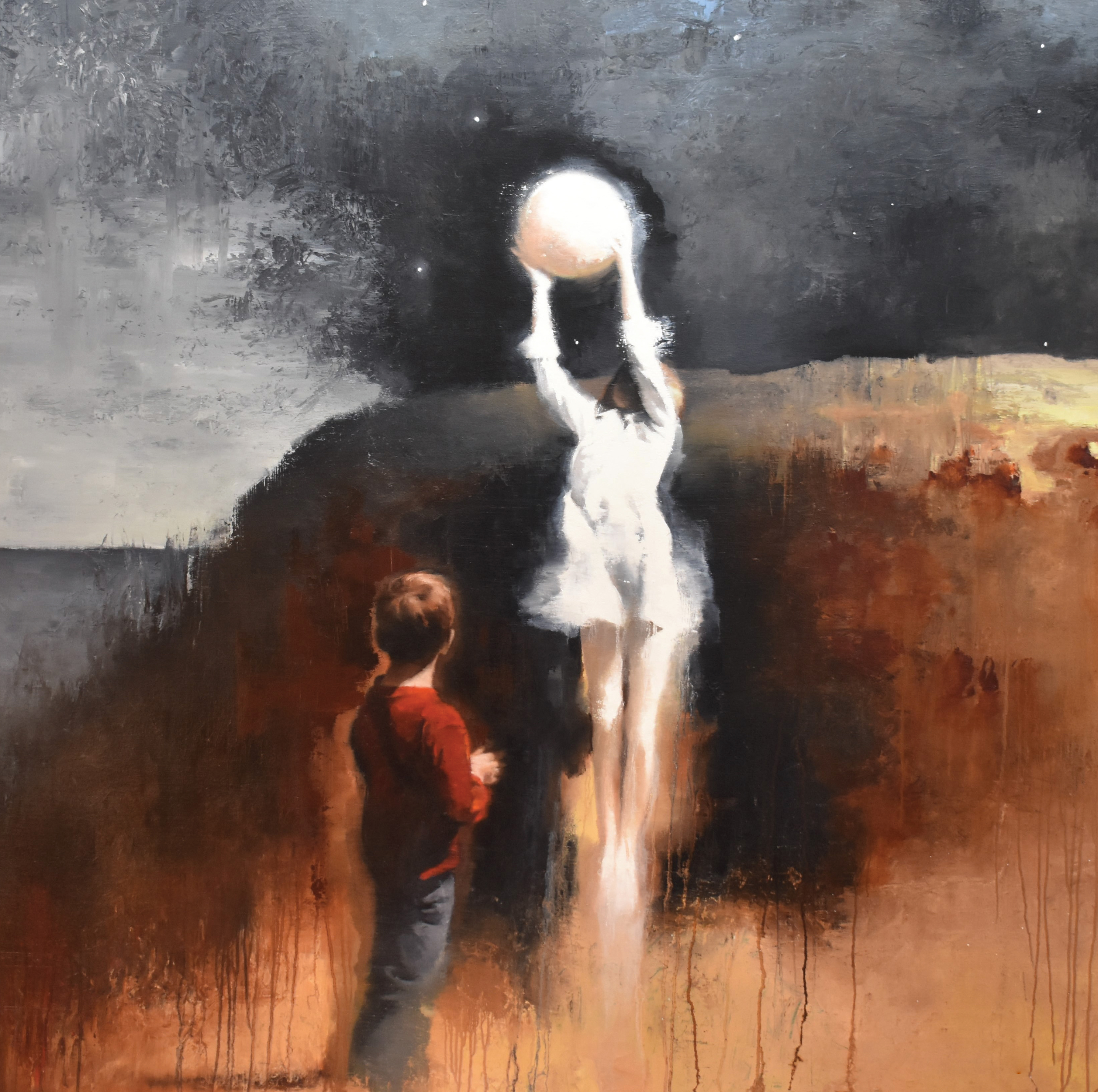 ARTISTS OFTEN DRAW UPON UNCONSCIOUS LONGINGS when creating works of art. Releasing them into the world like messages in bottles tossed into the sea, they carry wishes for viewers to connect with their own universal thoughts and secret prayers. California painter Gary Ruddell renders his work with hard-won craftsmanship, and his subject matter arises from his passion for life, family, and an understanding of the human journey. His paintings are especially notable for their ability to evoke powerful personal connections in all who see them, and to build upon individual histories.

Ruddell has lived his entire life in the San Francisco Bay Area and began painting as a boy. As a young man, his interests included surfing, motorcycles, dune buggies, hot rods, and rock and roll. Today, the surrounding landscape continues to influence his paintings, often capturing the feeling of squinting against the sun’s reflection off the sea while overhead the “white, bright light of the sky” illuminates ethereal figures, casting them as slightly mysterious silhouettes. Ruddell also cites socio-political changes over the years and the diversity of the Bay Area as having shaped his life and art. “In all my travels,” he says, “I feel this is the best place in the world to live.” 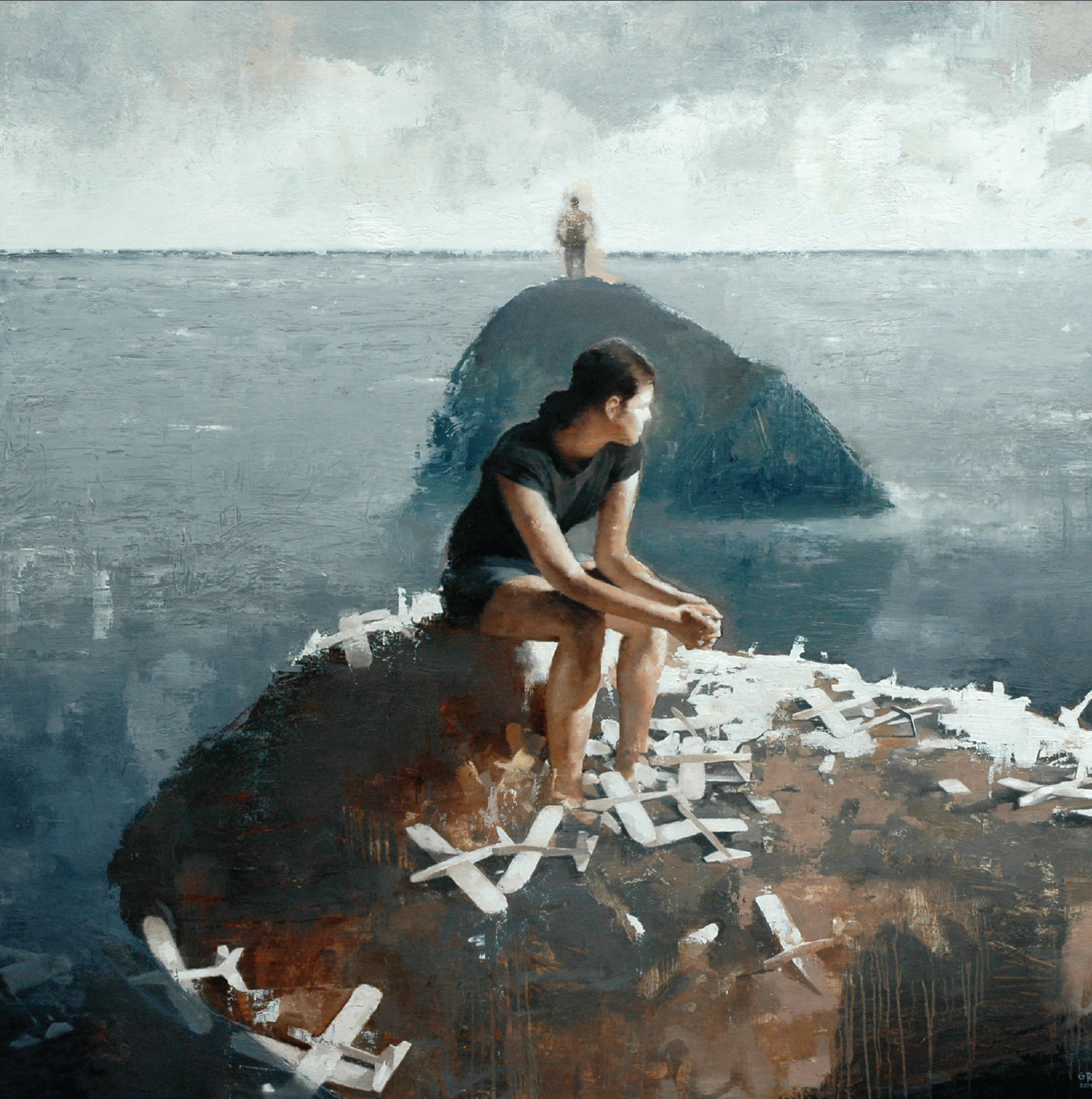 Ruddell began focusing on figurative realism and developing his drawing skills at California College of Arts and Crafts, where he earned a Bachelor of Fine Arts in 1975 with an emphasis on illustration. His exemplary drawing skills brought numerous magazine assignments for Playboy, Rolling Stone, Mother Jones, and various automotive publications. 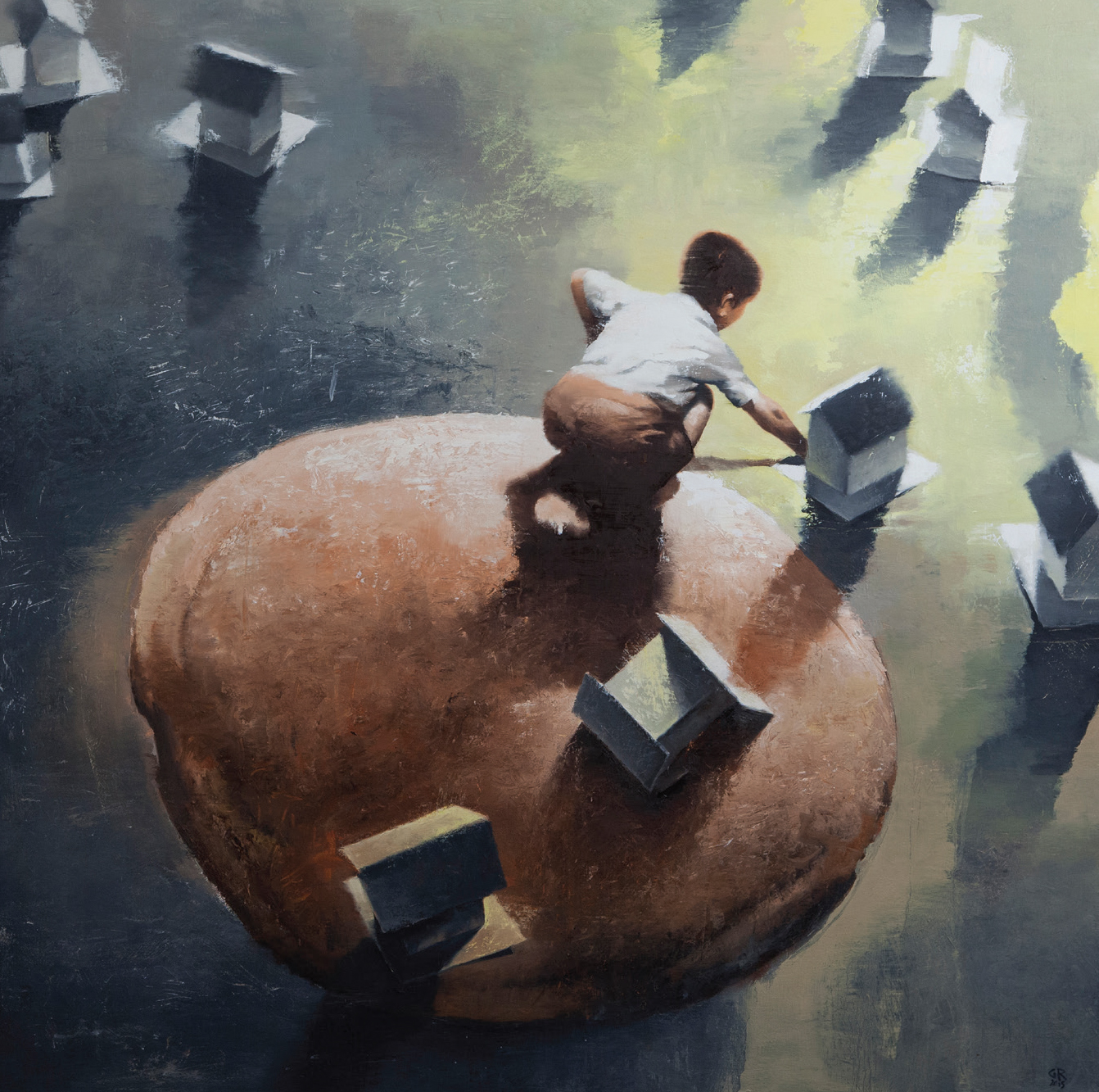 He first attracted attention for his science fiction book covers, displaying a flair for depicting action and combining realistic figures with imaginative settings. Simultaneously, he continued with his fine art and taught for a few years. For decades now, he has exhibited his expressive paintings in solo and group shows at art fairs and in prestigious galleries across the nation and internationally.

Lisa Dolby Chadwick has represented Ruddell for 17 years in her well-respected San Francisco Dolby Chadwick Gallery. Balance and harmony are central themes in his work, Chadwick explains, adding that she especially appreciates how Ruddell “orchestrates between the physical human body and the natural elements, often creating a sense of formal and psychological balance.” 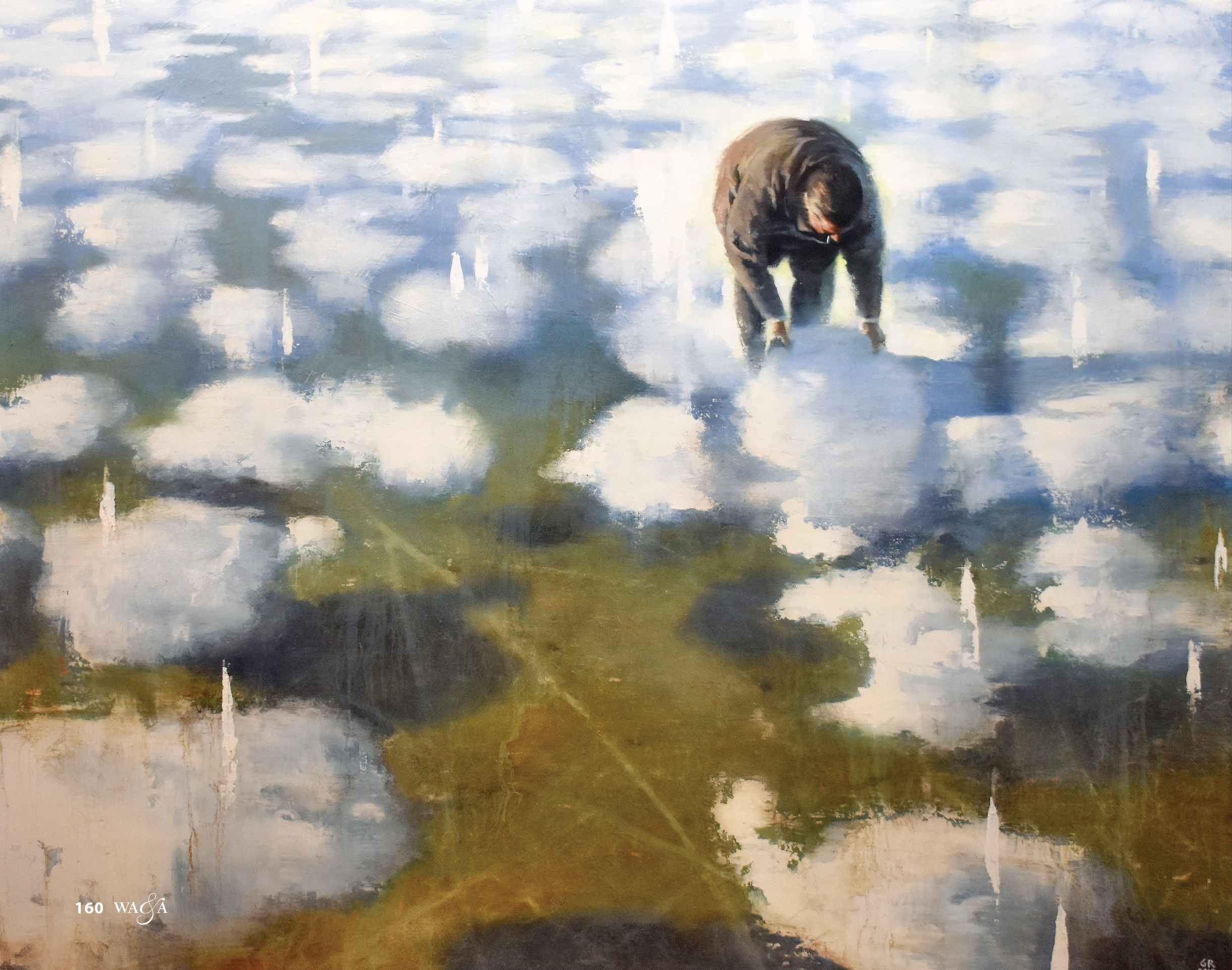 “Faces and figures are often obscured and ages ambiguous — they become very personal paintings without being specific portraits,” Chadwick adds.

Two groups of artists have influenced Ruddell: West Coast artists, such as Nathan Oliveira, Elmer Bischoff, Richard Diebenkorn, and David Park, who drew his attention to how paint appears on a surface and the effects of various application styles; and East Coast artists such as Eric Fischl, Sidney Goodman, Vincent Desiderio, and Andrew Wyeth, who inspired his use of narrative to create visual poetry.

These influences, constant experimentation, and hard work have created Ruddell’s signature style. Paintings such as Reckless Dreamer, Transition, and Yellow Moon exhibit enormous narrative and metaphorical and poetic qualities. Themes of figures on the precipice of an adventure, beginning passage to adult life, or trying to pierce a void to reconnect with distant others are often explored. They await their opportunity to spring forth, to fly into the future. We are granted a window into the lives of others who are unaware of our attention — they face away, fully engaged in their intimate moments. Each connotes possibilities. 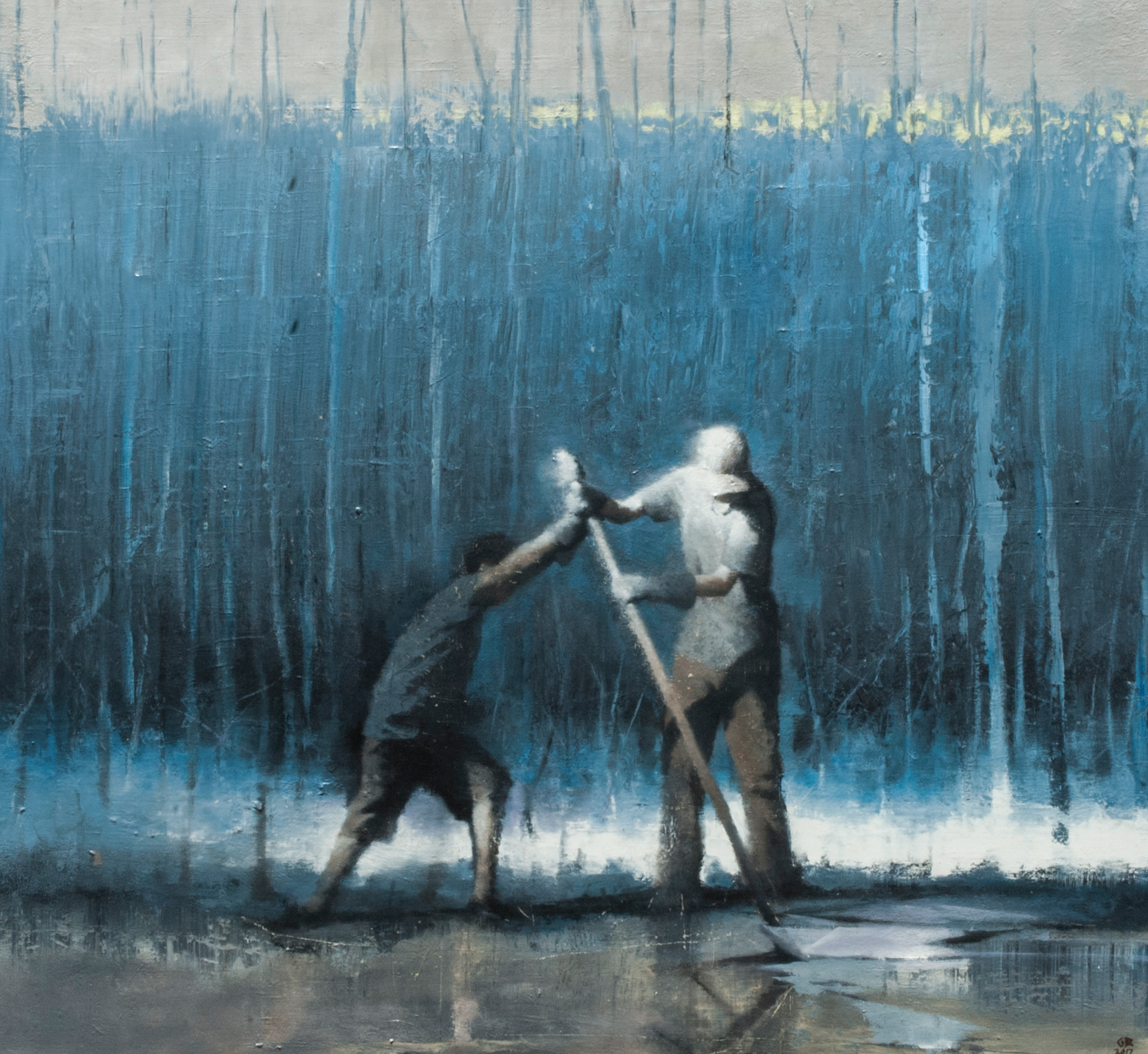 Ruddell keeps to a disciplined schedule. “Every day, I take an hour’s walk before I begin my work. It helps me to clear my head and organize my thoughts. I usually work six days a week, always taking Sundays off to be with my wife,” he says. Family is the bedrock of the artist’s life, and his models are his children.

In keeping with his ever-present alertness to the world around him, Ruddell always has a sketchbook on hand. When he sees something that strikes him — a figure, a concept, the way light falls in a setting — he records it. These are not roughly rendered — many are miniature masterpieces in themselves, fully developed. This is how he keeps track of images he may want to explore in more depth. When he’s ready to begin a new series, he goes through his sketchbooks for ideas.

Ruddell works on several paintings at a time, not using an easel, but mounting each on the walls of his studio. His subtle palette provides harmony. “My process is definitely more intuitive than analytical,” he says, “and sometimes paintings have to go through many versions until they feel right.”

Describing his work as “abstract with realistic elements,” Ruddell emphasizes that each painting constitutes a personal connection to his inner journey. He is “not interested in the replication of reality” but strives to eliminate nonessential detail, using rich, dark hues to heighten the effect of each figure’s luminous glow. “I am interested in the fragmentation, isolation, and the tactile surfaces in which paint conveys that ethereal feeling I try to express,” he says.

On the East Coast, New York City’s prominent Gallery Henoch also represents Ruddell’s work. They choose to “champion representational painters who exhibit a wide array of talents, yet who capture some truth that reflects their contemporary society,” says Andrew Liss, the gallery’s assistant director. “We relish the tactility of Ruddell’s surfaces. At first glance, his paintings are seductively beautiful despite their spare environments. He mixes the emotive qualities of paint to give us stirring dreamlike worlds where men and women pursue their undiscovered selves. Gary is passionate about living in a society that values honesty and sincerity, and he believes in inclusivity, humor, and hard work. His paintings reflect his deeply held beliefs.” 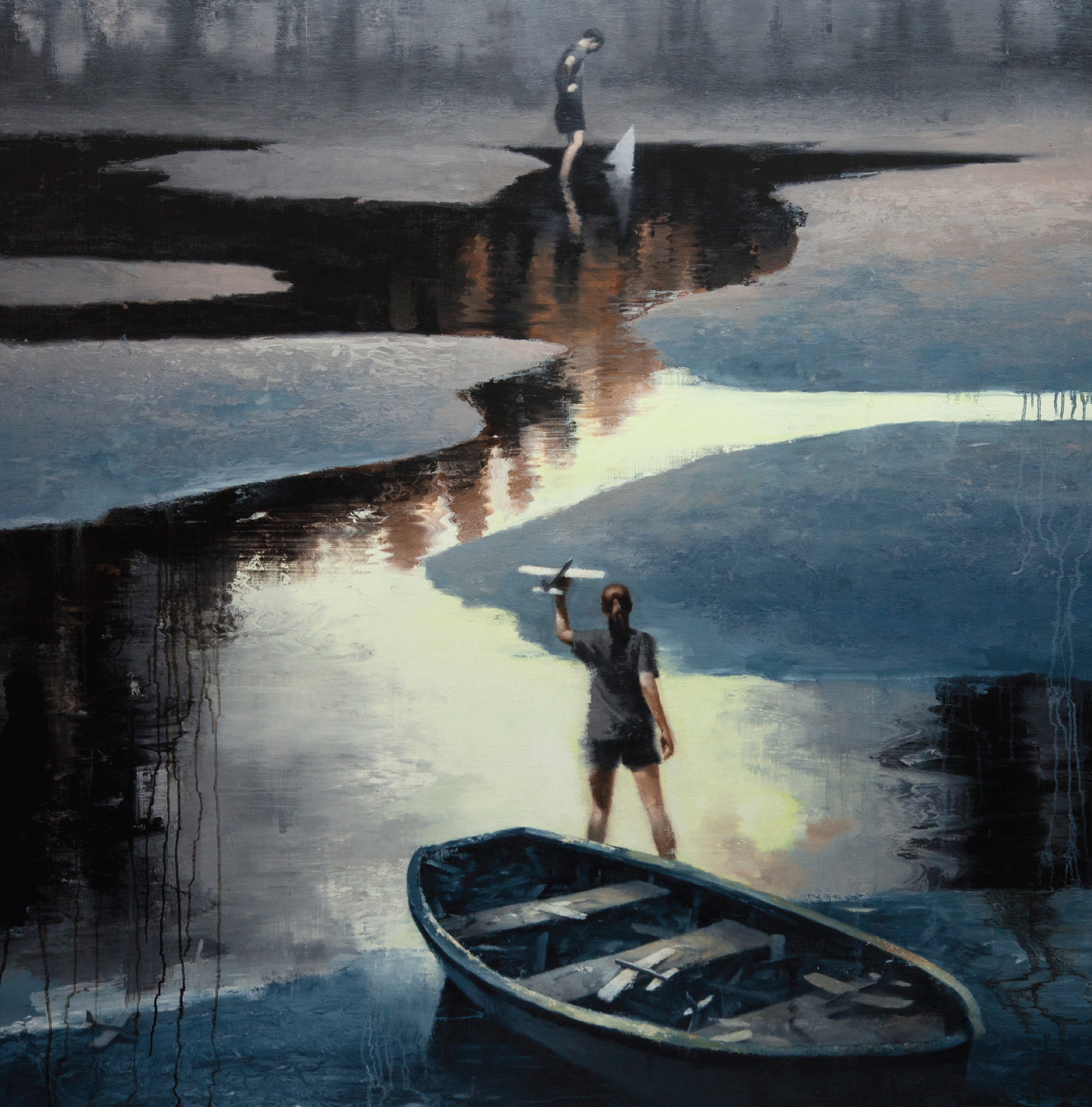 Ruddell’s collectors span the globe from Japan and Australia, to Kuwait and Germany, and he has represented the U.S. in an Art in Embassies show in Tbilisi, Georgia. He is a painter on a quest, tilting not at windmills but at artistic boundaries. Guided by a restless inner compass, he continually explores his emotional landscape and that of his subjects, taking us on journeys into unexplored territory. There is no doubt that those who appreciate fine art will want to come along for the ride.