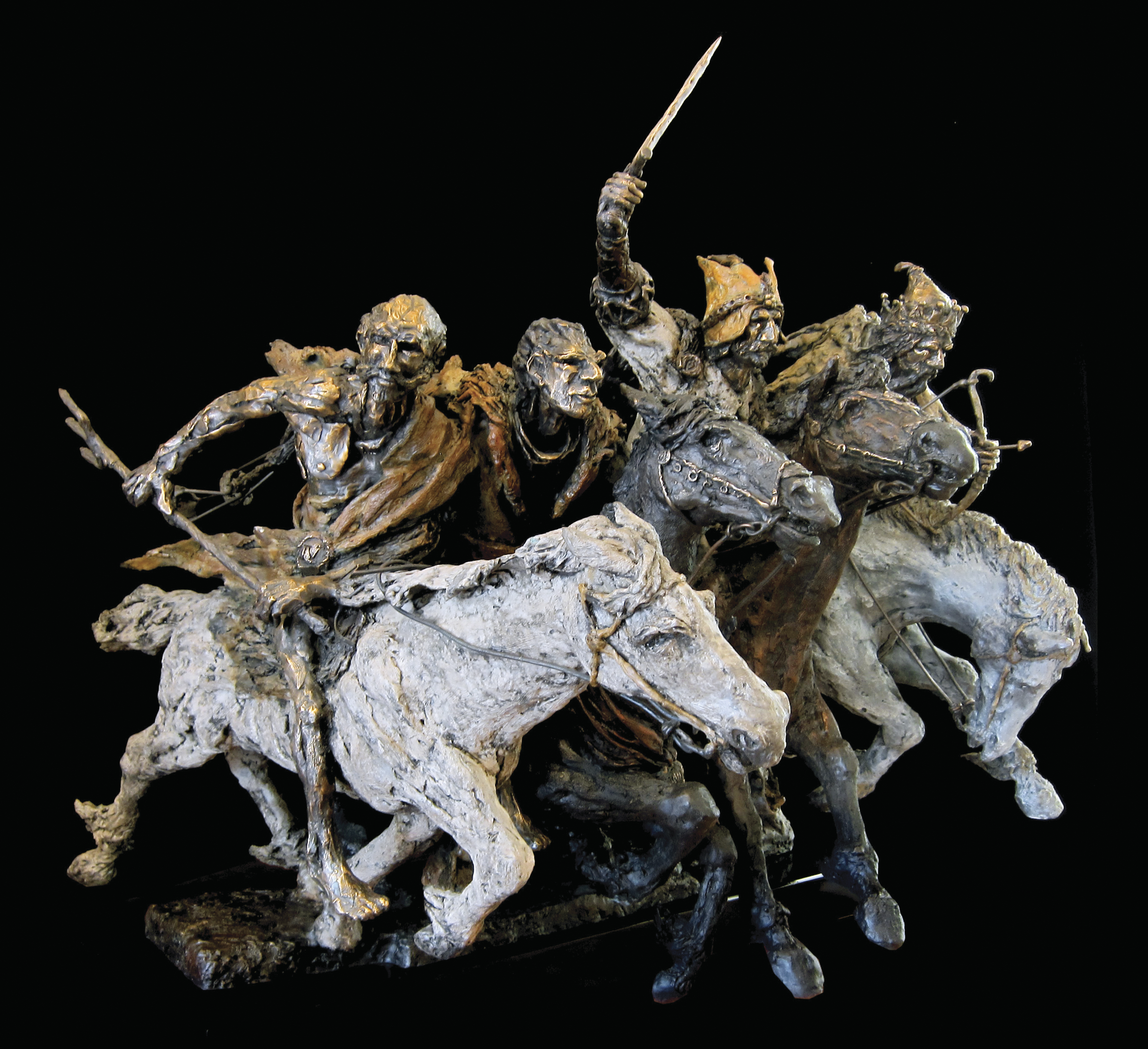 HIS ART HAS BEEN CALLED “EMOTIONAL REALISM,” and for Gib Singleton, those emotions are real.

“I’ve had hardships,” he says in his dining room at his home in Santa Fe, where he has lived for more than 35 years. “I’ve known some heartaches, but it did something. I use those heartaches to illustrate my work.”

Singleton’s abstract sculptures can be found across the globe. Western sculpture at the National Cowboy and Western Heritage Museum. Spiritual works at the Vatican Museums. He designed the cross on Pope John Paul II’s and Pope Benedict XVI’s crosiers. In 2010, 15 life-size Singleton bronzes — of John the Baptist and the 14 Stations of the Cross — were purchased by an anonymous collector and placed on a long-term loan at Lamy Garden next to Santa Fe’s St. Francis Cathedral Basilica. His works share space with Earl Biss paintings at the Singleton-Biss Museum of Fine Art in Santa Fe.

At 77, the artist is confined to a wheelchair, requires an oxygen tank to breathe — “Enough to run an acetylene torch,” he says. “My lungs are at 5 percent.” Yet he’s still driven by art.

“If I had to do it any other way, if I couldn’t live with art, I’d be really disappointed in God, I think. There’s such a reward in art. You don’t make a lot of money in it at times, but some of the letters you get in the mail … ”

He opens a letter from a middle-school teacher in Oklahoma City. “‘I want to thank you for making the world a better place to live,’” he reads. “‘Thanks for being who you are, and thanks for doing what you do.’”

He shakes his head. “How much is that worth? That’s why you do art.”

No matter how painful. Singleton grew up on a cotton farm in Missouri. He has gone through divorce. He has been homeless, sleeping on Connecticut beaches. He has sold his work from sidewalks. He has buried a 25-year-old daughter who died from a heroin overdose.

He gestures to a large photograph of himself and his daughter, then a young girl, behind him. “She was quite a girl,” he says. “I miss her, but I know she’s better off because the world wasn’t ready for that girl yet. She didn’t realize there isn’t a place any of us fit in. I really don’t fit in this world.”

But his art does.

Art — and the G.I. Bill — took Singleton off that cotton farm to Southern Illinois University, where he discovered a passion for bronze. That led him to the Art Institute of Chicago, which in turn led him to Academia di Belle Arti in Florence, Italy, on a Fulbright scholarship. Before he knew it, Singleton was a restoration specialist at the Vatican Museum, where he helped restore Michelangelo’s Pieta.

After three years in Italy, he landed in Westport, Connecticut — without a job. Homeless, the artist slept on the beaches but eventually took a job running the sculpture department at Fairfield University in Ridgefield. And although he had played cowboys and Indians as a kid, Singleton truly fell in love with Western art in Connecticut.

Frederic Remington had moved to Ridgefield in the early 1900s, and the city had established a Remington museum. Singleton kept returning to the museum, admiring Remington’s work.

“I came home one day and decided, ‘I’m going out West and study cowboy art.’”

That brought him to Santa Fe.

Singleton works in a cramped studio — maybe 5 by 8 feet — in the back of his garage, behind a Mercedes SUV and a modified 1964 Morgan Plus 4. “I told the builders I wanted it so that nobody could be in here but me,” he says.

“He creates from his subconscious,” says Paul Zuger, owner of Galerie Zuger, which has carried Singleton’s work for 19 years. “It’s a style he’s worked on, one he actually created, and it’s one of a kind and inspirational.”

His creations are often elongated figures without eyes.

“Your soul can go into my piece and get to the center of the sculpture and come back out again and understand where you’ve been and what you’ve seen,” he says. “I think eyes kind of block the person out of going into something. And besides, I don’t know how to make eyes.”

What isn’t a joke is how his art, both spiritual and Western, moves people.

His Western bronzes? “Man, what can you say?” says Thom Ross, a contemporary Western artist who owns Due West Gallery, across the street from Galerie Zuger. “It pushes beyond the traditional interpretation of Western bronze.”

And those Stations of the Cross? “For 800 years they’ve been done as Realism — or at least what the culture of the time considered real,” says John Goekler, who is editing a book on Singleton’s Biblical works. “But you look at Gib’s Stations and in the abstraction you get the feelings. The pain. The doubt. The anger. The love. And it just grabs you and rips you open.”

“You may get chills, you may cry, you will be moved in some way and wonder why that particular piece is so compelling to you,” says Fenton Moore, director of the Singleton-Biss Museum of Fine Art. “You have experienced ‘emotional Realism,’ and this reaction will stay with you for a long time.”

Singleton has no problem switching from the gunfight at the O.K. Corral to the Last Supper.

“It’s all the same thing,” he says. “A kiss is still a kiss no matter who it comes from. A handshake is still a handshake. There’s no difference between love and hate.”

What drives him, and his art, are emotions.

“I feel it before I even start the sculpture,” he says. “I don’t think I’ve ever done a sculpture where I didn’t realize the emotion of the subject matter before I rendered it.”

For Singleton, whether it’s a cowboy or Christ, there’s nothing more emotional — or spiritual — than a human being.

And while his art may be painful, Singleton is far from depressed.

“I know why I’m sitting in this chair,” he says as he sips a Bloody Mary. “I had too good a time. I loved those cigars and night life, hanging out in bars. But there ain’t a damned thing I’d have done differently. There’s only one mistake I made. The good things in my life, I didn’t do enough of.”

Johnny D. Boggs is a Santa Fe-based writer who has won four Spur Awards and the Western Heritage Wrangler Award for his fiction. His novels include South by Southwest and Hard Winter, and he has also written about art for several magazines. His Web site is www.johnnydboggs.com. 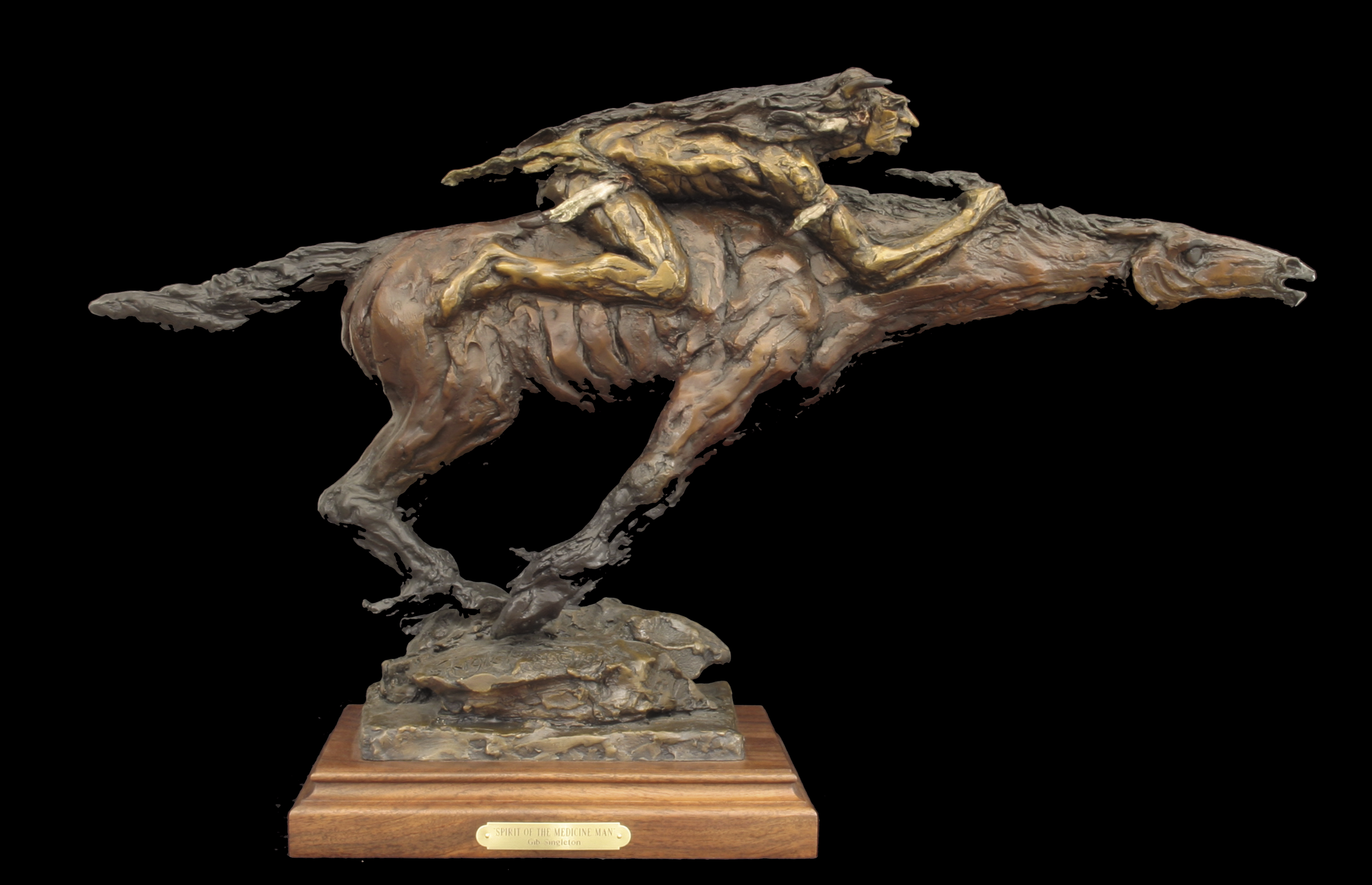 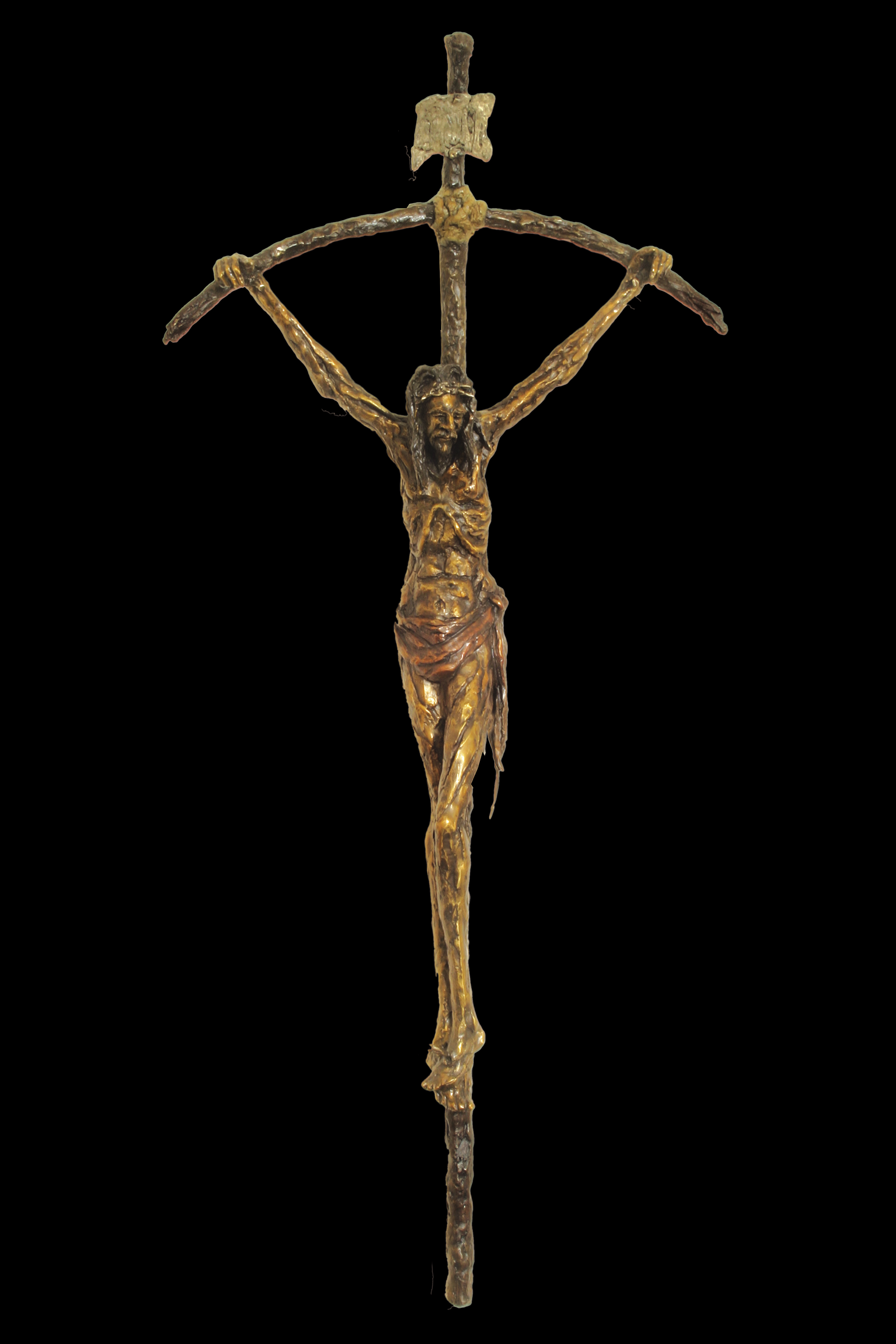 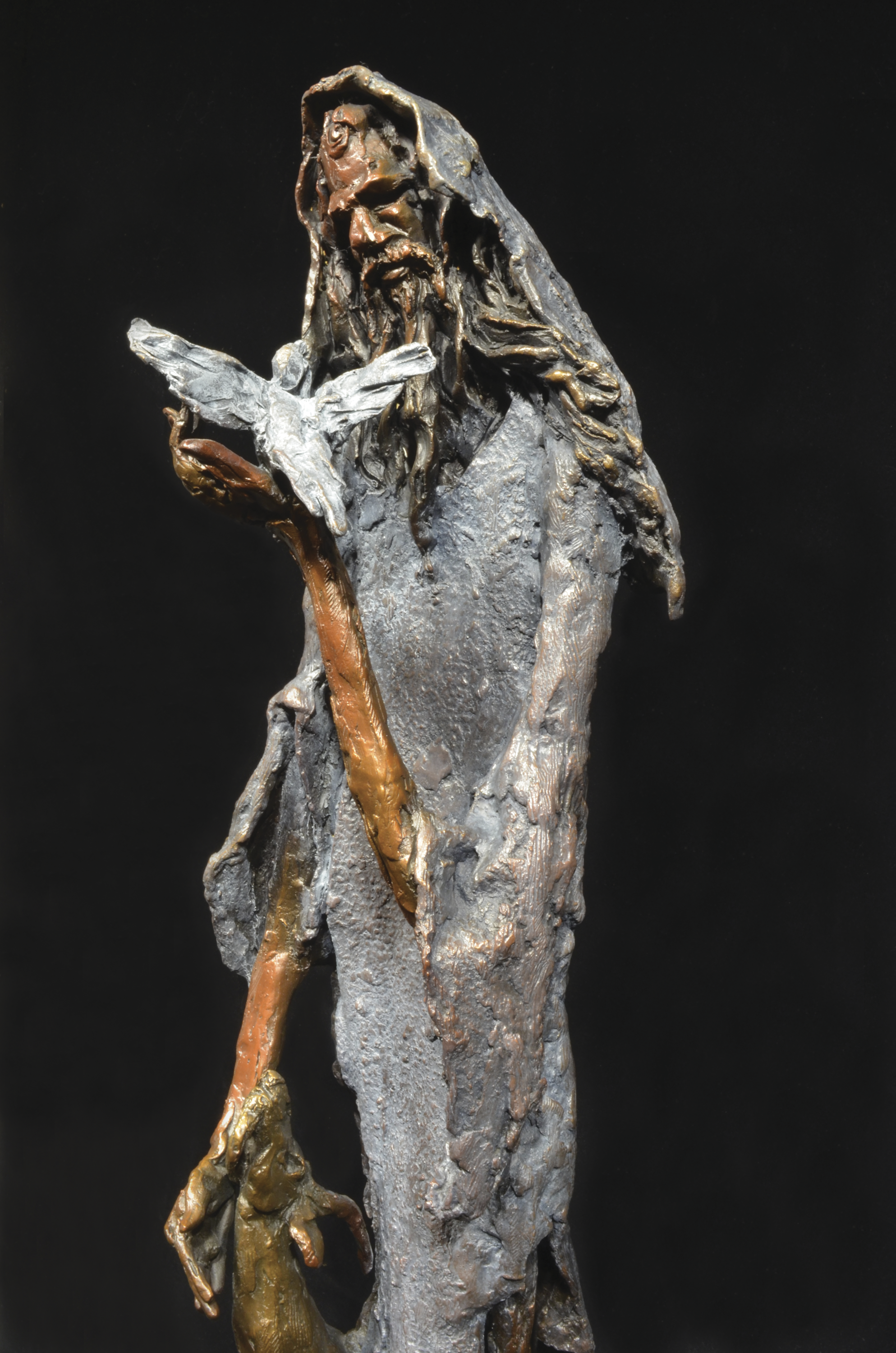 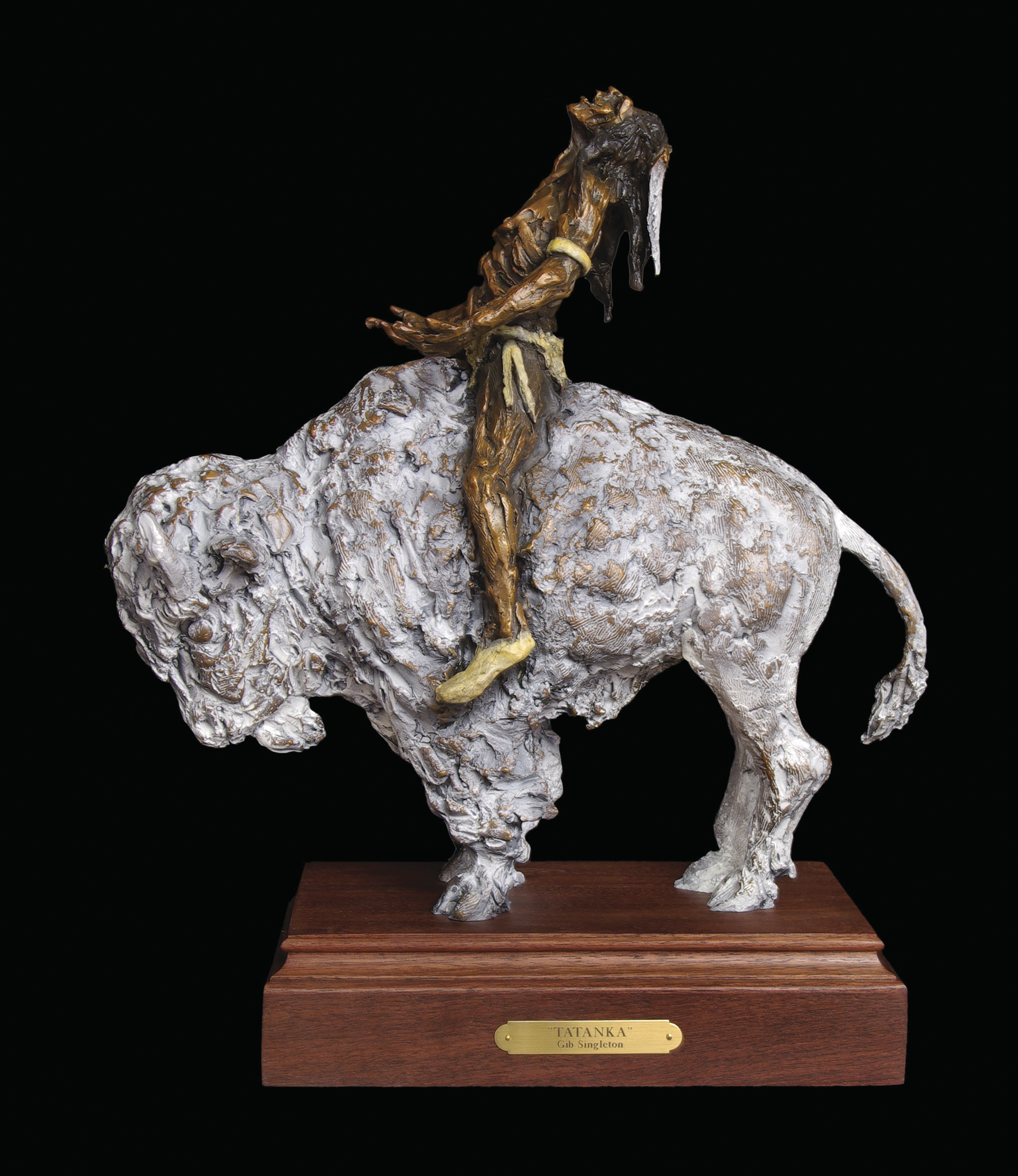 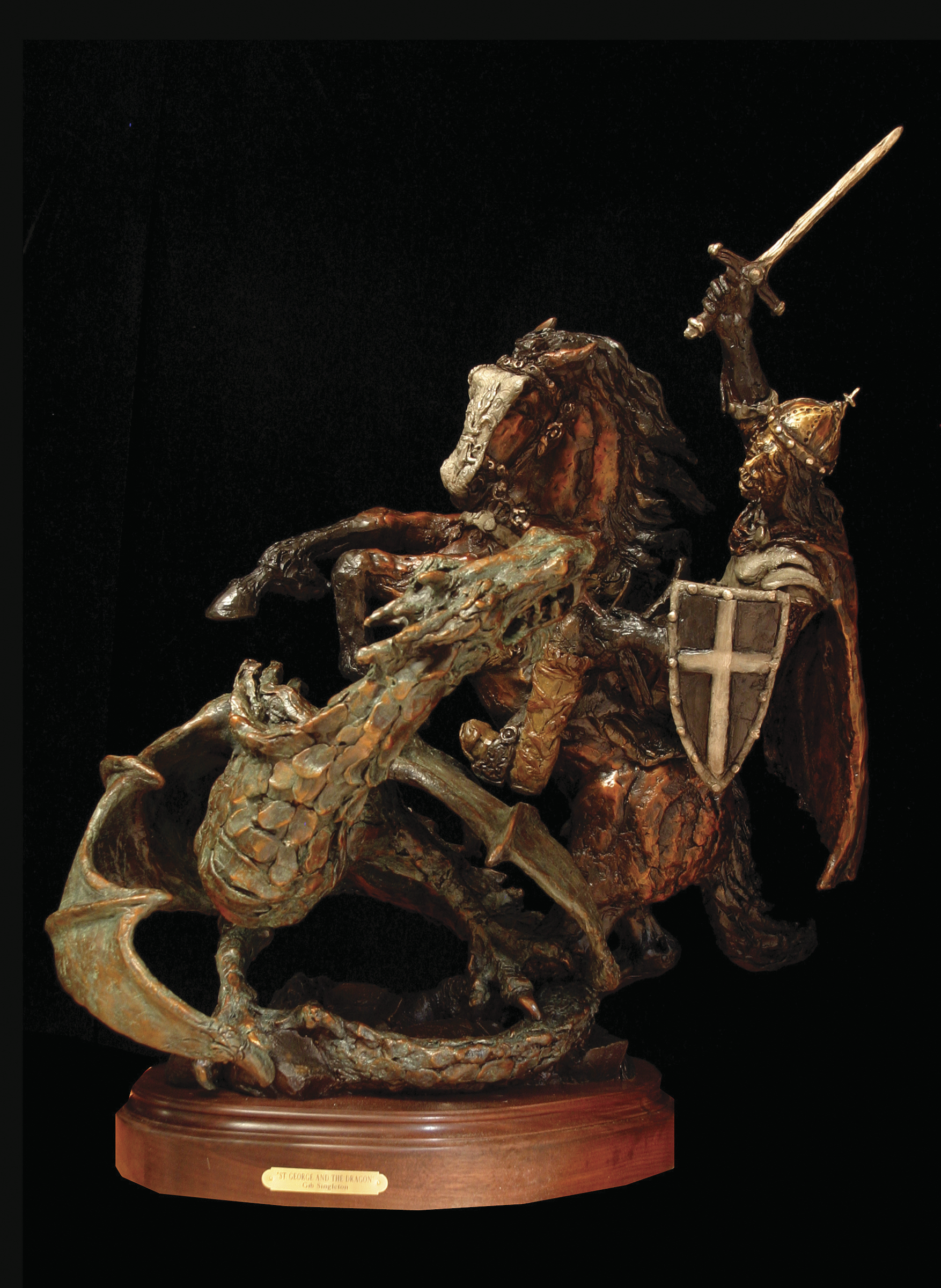