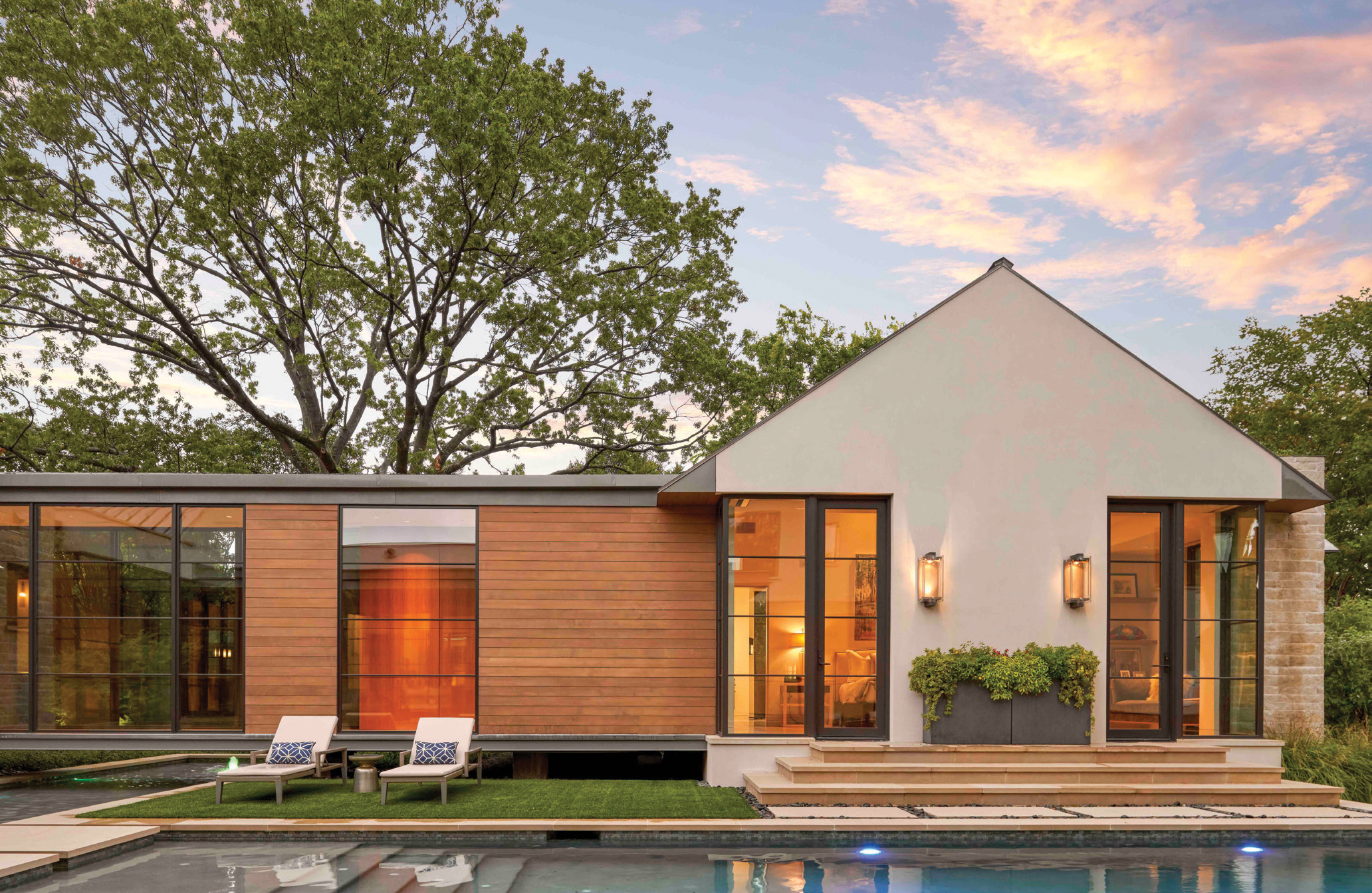 The house makes the most of indoor-outdoor living and was designed around the mature trees on the property. The homeowners’ bedroom enjoys immediate access to the pool and garden.

Last fall, a half-dozen tornados bounced through Dallas, Texas, leaving a swath of destruction in their wake and damaging hundreds of homes. Of those caught in the tornado’s path, 12 were built by BufordHawthorne, which is why Barry Buford and his business partner Gabe Hawthorne have spent much of the past year rebuilding homes, many of which they’d only recently finished. 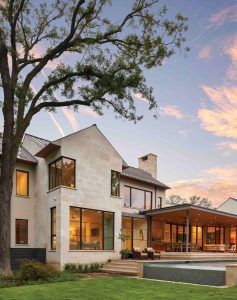 David Stocker, a founder of SHM Architects, designed this home in a quiet Dallas, Texas, neighborhood with crisp, clean lines expressed in Lueders limestone, Douglas fir, stucco, and a standing-seam metal roof. A covered outdoor living room sees heavy use most of the year.

“The hard part is that [the tornadoes touched down in a] really beautiful, heavily treed part of Dallas,” Buford says. The long-established Preston Hollow neighborhood, he explains, was developed from the 1930s to ’70s. Today, it’s characterized by older homes on large lots with mature trees. And stately trees — while prized for their beauty and the privacy, shade, and noise-buffering they provide — can be dangerous in a storm. 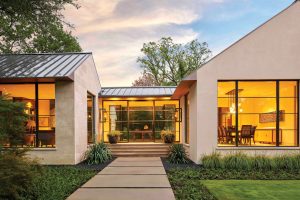 From the street view, the house has multiple rooflines and a transparent entry to minimize its impact on the neighborhood.

It was the live oaks and red oaks mainly that helped define the contours of a home built by BufordHawthorne and designed by David Stocker of the Dallas-based SHM Architects. “One of the largest on the property was a red oak, and red oaks are incredibly finicky,” says Stocker. “You blink at a red oak, and you can kill it. We tried not to disturb the roots or mess with its water flow so we could keep it alive.”
Protecting the trees was absolutely a priority for the clients, who would be replacing an old home with new construction. In terms of design, they expressed an affinity for traditional forms with a contemporary feel. Stocker’s design accomplished both goals. 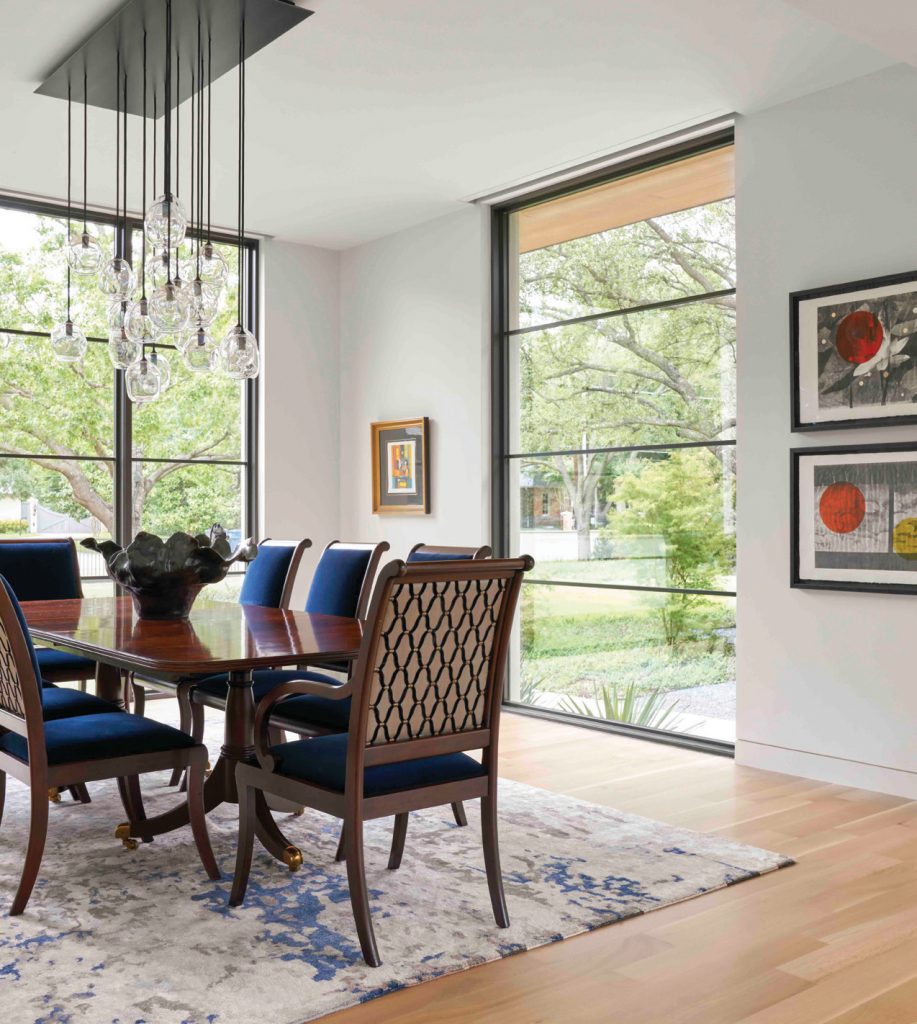 The dining room pairs a hand-blown glass chandelier from John Pomp Studios with a rug by Tony Farah, of the Dallas-based Farah Rugs. 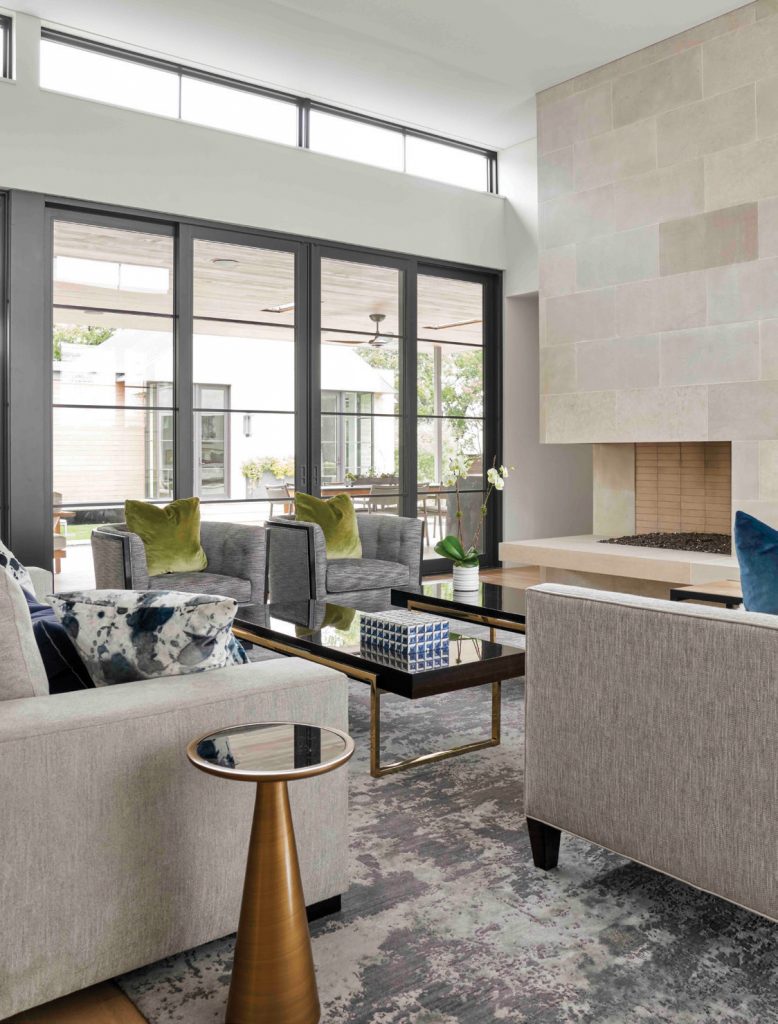 A limestone wall with a built-in fireplace and clerestory windows keep the living room light and airy. The cocktail tables are from Interlude Home, and the swivel chairs are from Kravet.

The home’s crisp, clean lines are expressed in Lueders limestone from Texas, Douglas fir, stucco, and a standing-seam metal roof. Low profile when viewed from the street, the house has a two-story gabled mass toward the back with the second-floor that houses the kids’ bedrooms and playroom. It’s shaped as a U, with the two wings projecting toward the back of the property. The homeowners’ bedroom suite on one side faces the kitchen, living room, and loggia, where upholstered furniture, big fans, recessed lighting, and a grill and fire feature encourage year-round use. Between the two wings, a sleek infinity-edge pool with a spa defines the outdoor plan. The L-shaped pool flows around large stepping pads, then turns 90 degrees and becomes a shallow water feature terminating at a small fountain. “The forms feel familiar,” says Stocker, “but it’s done with a twist.” 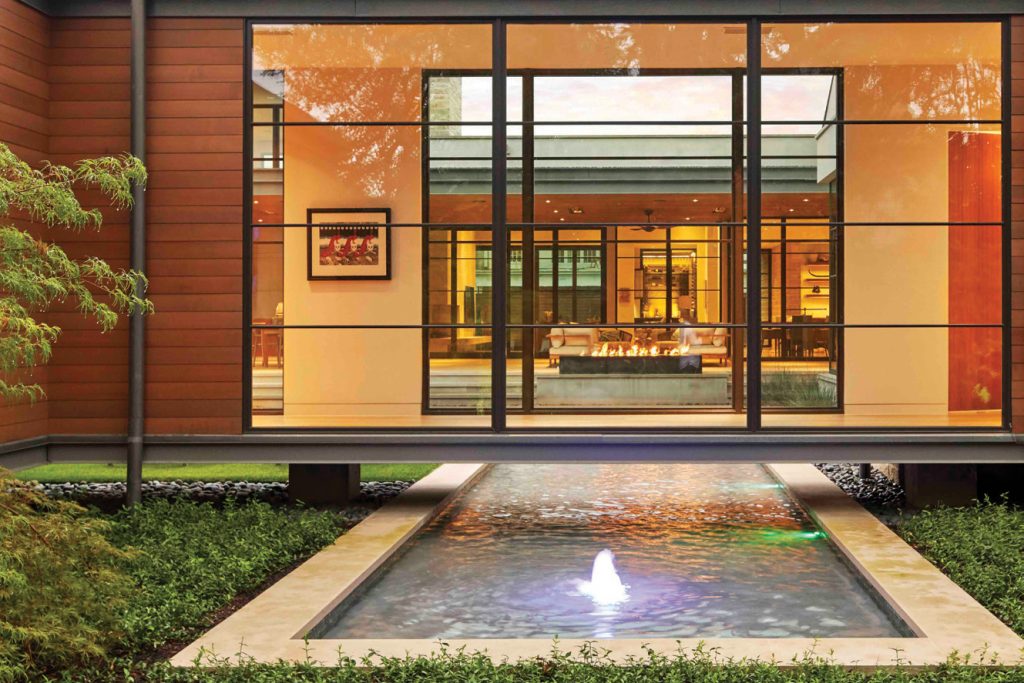 The L-shaped pool has a shallow section that runs under the bridge to the homeowners’ bedroom and culminates in a water feature. 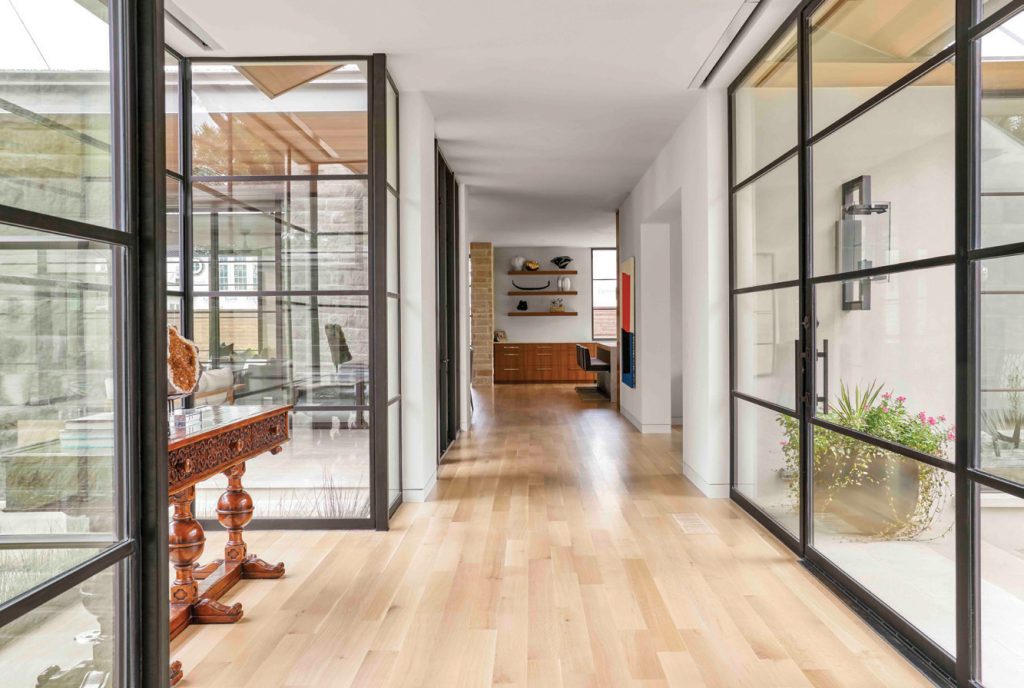 The home is furnished with some antiques and art from the couple’s previous home, including this table that’s highlighted in the glassy entry.

To minimize the home’s impact on the stateliest of the red oaks, the structure was built on an elevated foundation and designed with a glass-walled bridge that spans the water to access the primary bedroom suite. The bridge creates a sense of drama and discovery. It also acts as a pause between spaces. Stocker likens this effect to the spaces between musical notes — a particularly apropos analogy in a home where the owners’ program included a professional-grade music studio, for which an acoustic consultant was brought in.

“In music, the space between the notes is the most important thing,” Stocker says. “They create pauses so that you can reflect. In a home, a series of rests is intended to connect you to the landscape.” 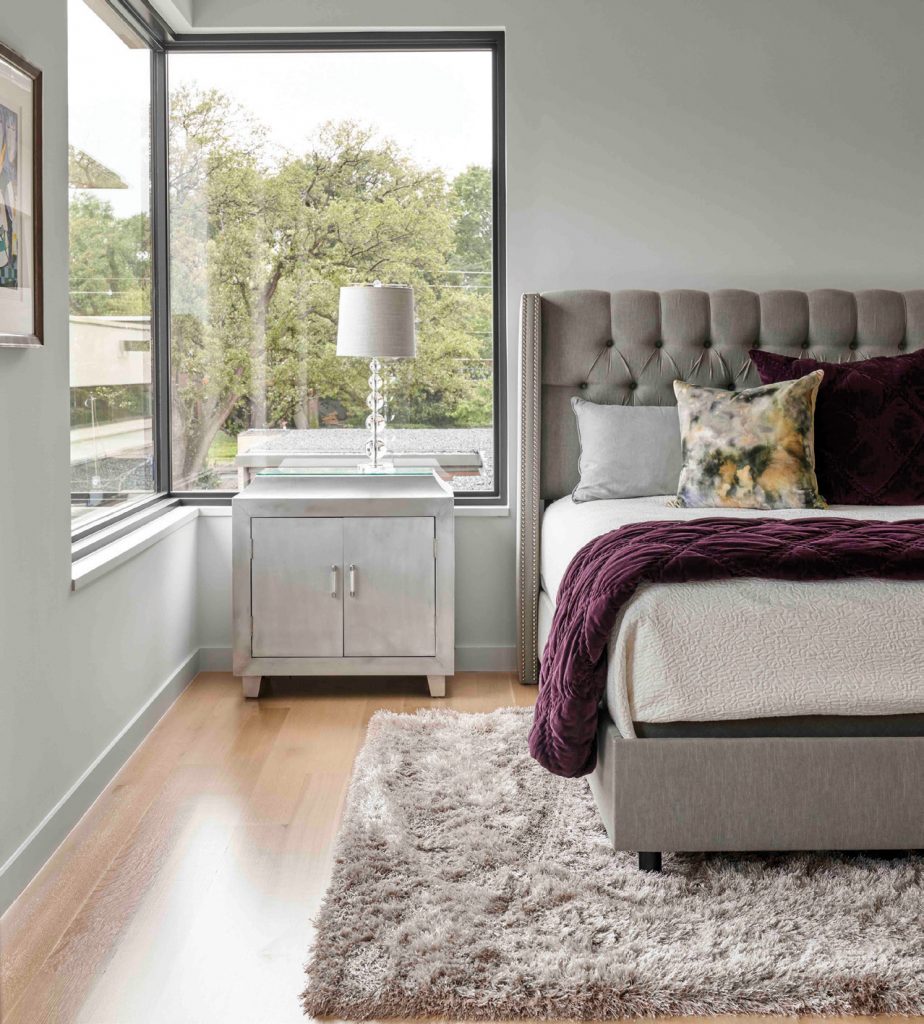 Large corner windows in an upstairs bedroom brighten up the space 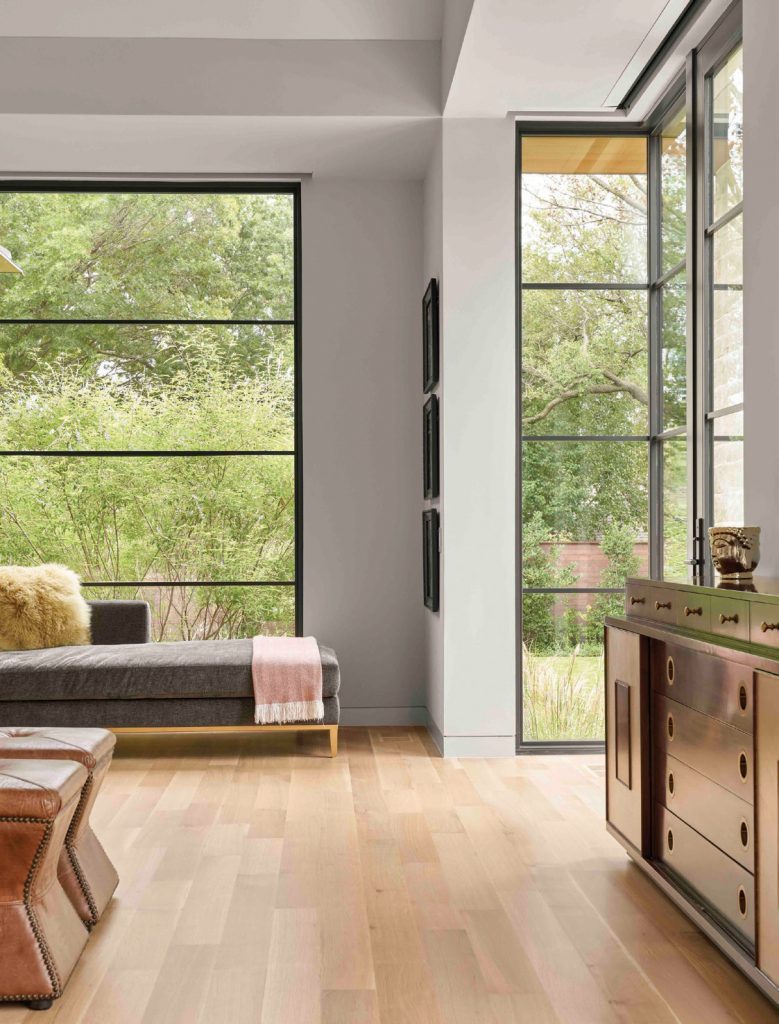 A sense of openness and airiness was established at the entrance, where an oversized glass and steel pivot door, set within a glass volume, affords an unimpeded view down the length of the pool. White oak floors throughout the home unify the aesthetic, while rift-cut walnut warms up the kitchen and office. 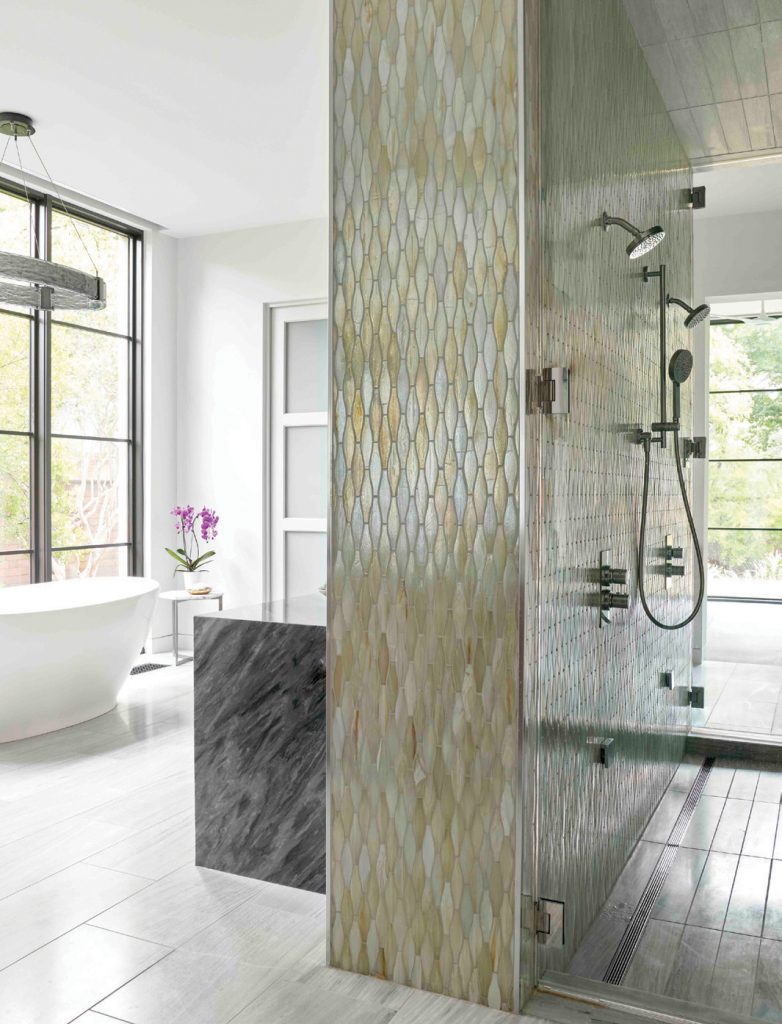 This bathroom is serene and dramatic, with a sculptural tub, walk-through shower, Bardiglio marble counters, brushed-marble floors, and glass tile. 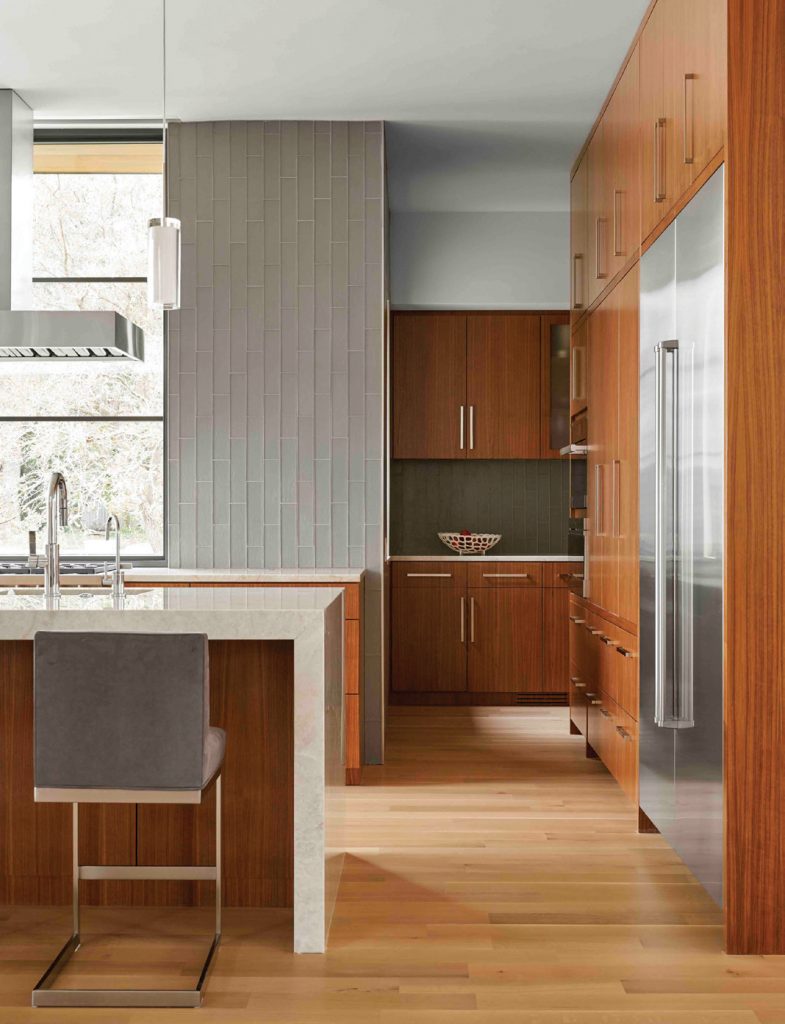 The kitchen is defined by textured glass tiles from Knoxtile, Tech Lighting pendants, and Taj Mahal quartzite, with veining that references the walnut cabinets. Brueton counter stools are upholstered in easy-to-clean Ultrasuede.

Interior designer Delaney Warren, of Delaney Warren Design, was brought in at the start of the project, allowing for seamless collaboration between all parties. “The homeowners wanted clean lines and a modern feel, but also wanted it to be very comfortable and inviting,” Warren says.

The palette evolved over time, she explains, with mostly neutral foundational pieces that were energized by pops of color: dining room chairs upholstered in royal blue, chartreuse pillows in the living room, and Pop Art in some bedrooms. The wife joined Warren on visits to design showrooms to select materials: soft velvet and chenille fabrics, glass tiles for the kitchen and master bath, statement lighting, and a perfect slab of Taj Mahal quartzite for the kitchen countertops. While the owners did incorporate some antiques and art they already owned, they’ve since enjoyed collecting more pieces specifically for the home. 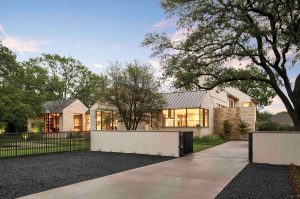 The home was designed with the larger, two-story section toward the back, so as not to appear monolithic.

One of those artworks was damaged by a tornado when a piece of slate from a neighbor’s roof flew through a window and wedged itself into a painting. And that red oak the team so carefully designed around? It also fell victim to the high winds. But even a tornado brings its own silver lining, Buford says. “A house like this is so beautiful, but if you live there every day, you might begin to take it for granted. But then a tornado comes along, and you end up appreciating it even more than you did at first.”