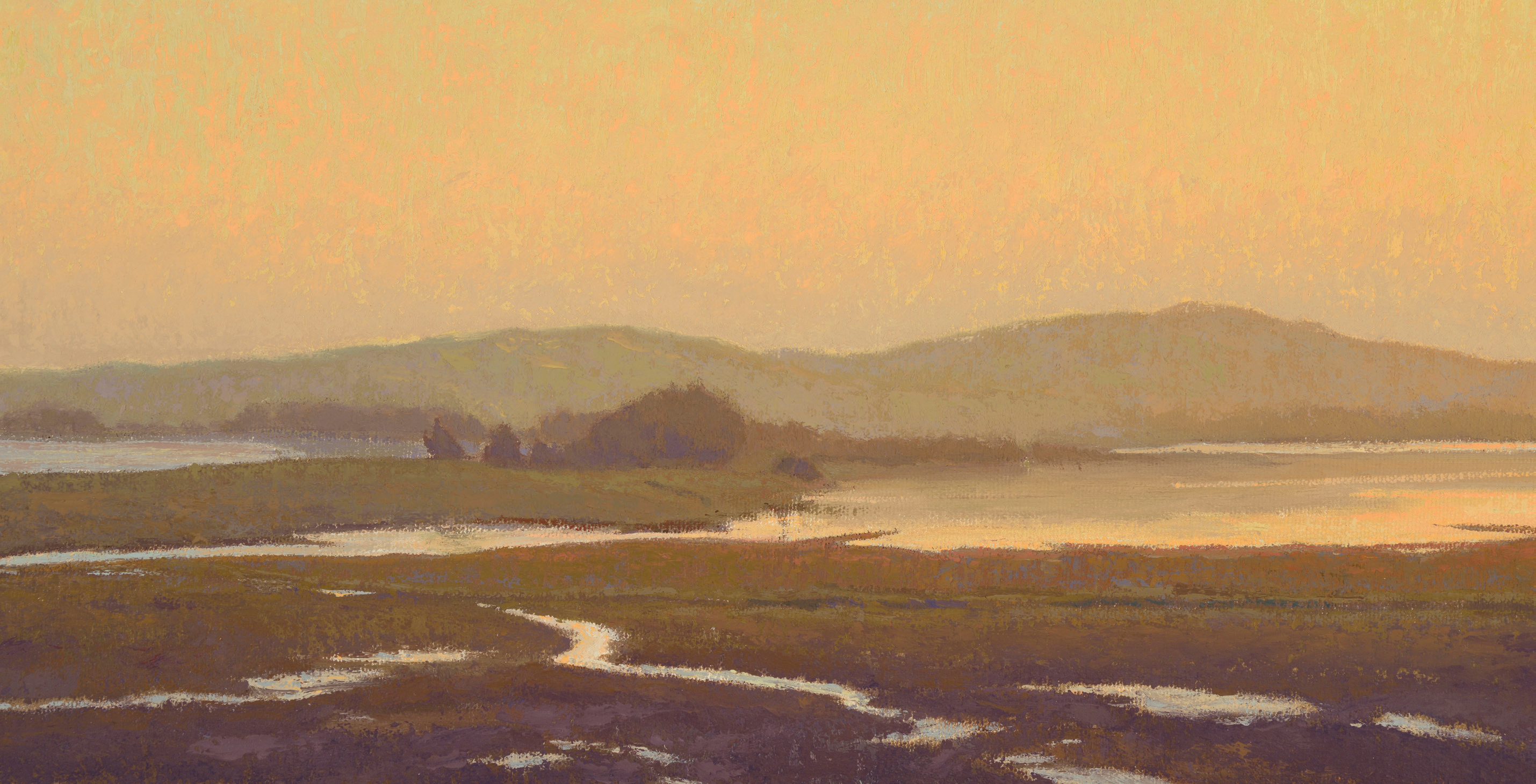 STANDING ON A DOCK ALONG THE WARWICK RIVER IN VIRGINIA ONE MOONLIT SUMMER NIGHT, Jennifer Moses pulled out her portable set of gouache paints. She made color notes and sketches of the scene before her: a full moon amid wispy clouds, the river’s purple-blue water, and an inviting glimpse of house lights between leafy branches ashore. Back in her studio in Ojai, California, she used her plein air notes to produce several successive renderings in oils, each time translating the image into something more expressive of the atmosphere and feeling of that moonlit night. In the final iteration, titled Resplendence, the moon and clouds are only visible as reflections in the river, while deeper tones and contrasting touches of luminescence create an almost magic sense of serenity. “With each study, I edited the grand vista into a more intimate scene. With the focus on reflections in the water, the painting became more mysterious and contemplative,” Moses says.

This is how Moses tends to work, first capturing an impression of a landscape, sea, or sky — lately including nocturnal scenes — and then reprising and refining the image until it reflects, not only her visual perception, but more importantly, her emotional experience at the time. “It’s the essence and the spirit of the painting that becomes the subject,” she says. Resplendence was part of the American Tonalist Society’s May 2019 inaugural exhibition, Shades of Gray, at the Salmagundi Club in New York City, where the painting earned Curator’s and Patron’s Choice awards. 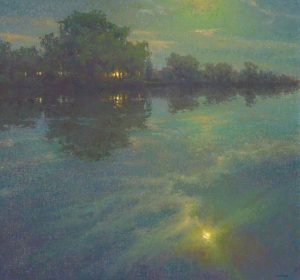 As Moses contemplates her subject, what often emerges is a subtle suggestion of the ephemeral nature of life — something briefly shimmering before it disappears. Her fireworks series, for which she has become well known, reflects that approach. In her 2017 book, Lit from Within, Moses writes: “Capturing these fleeting aerial acts has become a celebration of the human spirit. Each one is unlike the next. Their unique journey provides endless variations within this mystical and celebratory theme.” Her first explorations depicted the full spectacle of exploding color. A more recent painting, Ephemeral, captures the final brilliant flashes as they evaporate into the night sky. “As they become part of the heavens, they reflect the transience of life,” she says. “With this one, once the lights disappear, all that’s left is the smoke in the atmosphere.” 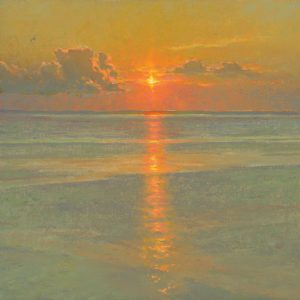 Born in Kansas, Moses moved to southeastern Virginia when she was three. She grew up along rivers that feed the Chesapeake Bay, engendering in her a deep love of the outdoors. When she wasn’t out on docks and water, or snow skiing farther inland, Jennifer and her sister were encouraged to pursue creativity and the arts. Their mother, an elementary school teacher who painted some on her own, signed her daughters up for classes, including drawing, painting, piano, and ballet. In high school, Moses narrowed her focus to the visual arts. She earned a Bachelor of Fine Arts in art education from Virginia Commonwealth University, where much of her emphasis involved studying fine art. Following graduation, her passion for creating art outweighed her desire to teach. She moved to New York City, immersing herself in SoHo’s art scene. She painted large canvases, exploring landscapes and figurative imagery with an abstracted, contemporary feel. While in New York City, she also developed a strong interest in the Arts and Crafts movement, Art Nouveau design, and early California Impressionist painting. 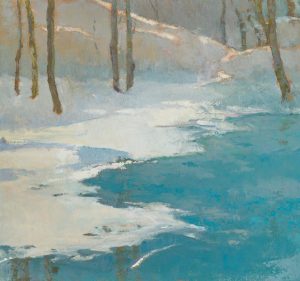 Moses settled in Ojai, California, in 1994 and spent several years renovating The Pratt House, a historical 1909 Greene and Greene bungalow. The experience continued her self-education in architecture and design, and added to her appreciation for the decorative arts. Among other things, it left her with an enduring admiration for qualities in Japanese art that helped inform the early 20th-century Arts and Crafts movement — and which she eventually absorbed into her aesthetic. “Especially Japanese woodblock prints,” she says. “They simplified and refined everything in nature down to the strongest elements.” 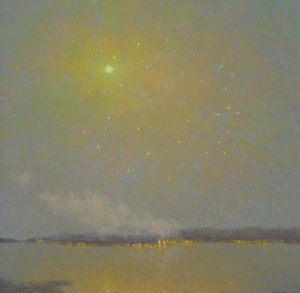 While raising her son, Moses took classes in photography and pottery, and she established a small business creating large-scale concrete garden pottery with Arts and Crafts style inlaid tile. In 2000, ready for a less labor intensive and more personal form of expression, she returned to painting.

Moses acquainted herself with current-day California artists, finding like-minded mentors whose guidance allowed her to explore more contemporary concepts within landscape painting. Key among these were Daniel W. Pinkham and David C. Gallup. “There’s something emotive about Pinkham’s work,” she says. “While it’s in the tradition of California Impressionism, there are contemporary elements that resonated with my affinity for abstract expressionism and color-field painting.” From time spent studying with Gallup, she gained a better understanding of color theory and the design of shapes. 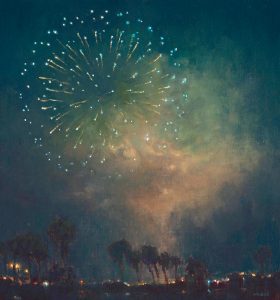 As she honed her craft over time, Moses experienced what she calls happy accidents, which led to new approaches. “Struggle often leads to breakthroughs, whether in life or in painting,” Moses says. One such pivotal moment resulted in a process she often turns to with her larger works: using both brush and palette knife to build textured surfaces through thin layers of paint. Underlying hues peek through, producing a rich sense of color vibration and depth. The first piece she painted this way was a forest snow scene. “It felt like the snow was actually crunchy and three-dimensional,” she says.

A signature member of the California Art Club and the American Tonalist Society, Moses’ work has been included in exhibitions at major museums, including the Autry Museum of the American West, the Pasadena Museum of California Art, and the Carnegie Art Museum, among others. Jessica Nault, owner of Del Monte Fine Art in Carmel-by-the-Sea, California, which represents Moses, notes that the artist’s work is “consistently a topic of conversation in the gallery for being something fresh and new, thanks in part to her unique texturing of paint that is experiential, and her exceptionally clever composition patterns.” Adding to the overall impression are custom-designed frames by Moses’ partner, fine-art framer Chris Kirkegaard. On the couple’s oak-shaded Ojai property, small stucco cottages house her studio and his frame shop. 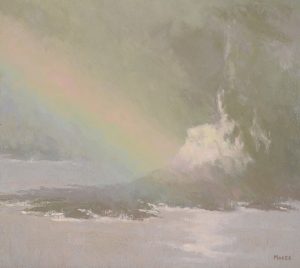 Elaine Adams, the director of American Legacy Fine Arts and executive director and CEO of the California Art Club, points out that “Jennifer has developed her own art language that reflects her personal nature, which is serene and elegant. The tonal qualities of her paintings and subtle shifts in color create a captivating sense of mystery that pulls the viewer into the scene.”

For Moses, engaging the viewer means moving beyond the ongoing refinement of her craft and aspiring to touch more deeply into a quiet space of awareness and observation. In this place, she can feel and express the vital, ethereal aspects of nature and life. “The process is a celebration of beauty and the interrelatedness of all things,” she says. “My greatest desire is to communicate a meaningful, emotional connection through the visual poetry of painting.”