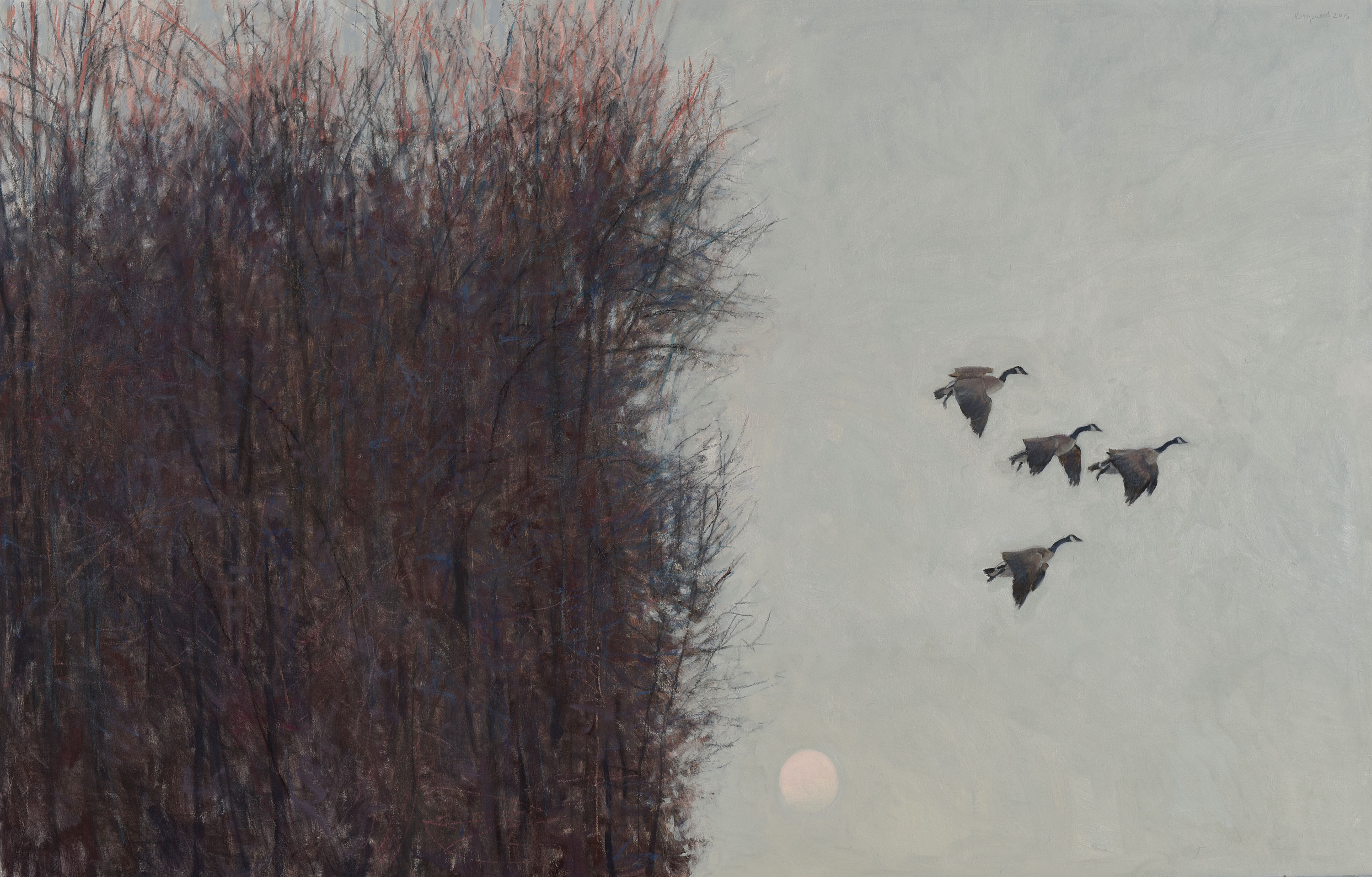 04 Aug Return of the Iconoclast

DON KINGSWOOD HAS SPENT MOST OF HIS EXSISTENCE in search of a deeper spiritual connection to birds, mammals and the diversity of species on earth, but he is loath to embrace the pat label of “wildlife artist.”

He isn’t a chronicler, an illustrator or a depicter. Compared to his contemporaries, Kingswood is considered an enigma, a nonconformist and a defiant iconoclast whose oeuvre doesn’t adhere to the conventional approaches of animal painting. His reputation as an outlier, however, is one that Kingswood couldn’t be happier to own. Through the end of July 2015, new works by Kingswood are being featured in a three-artist show at Gerald Peters Gallery in Santa Fe.

The much-anticipated exhibition, Contemporary Naturalism, which includes pieces by painter Ewoud de Groot and sculptor Peregrine O’Gormley, represents the first U.S. showing in nearly a decade of major Kingswoods, all exploring the intersection of wildlife and habitat.

Maria Hajic, who oversees Peters’ department of naturalism, says the show represents a homecoming of sorts for Kingswood, and it follows a nearly sold-out show at a gallery last year in London, England. Hajic notes that Kingswood’s collectors are not those who typically gravitate toward highly detailed and photo-realistic representations of wildlife. “People who are drawn to Ron’s work tend to have more modern sensibilities and they want paintings that have big visual impact. Typically, they own more contemporary artwork and live in large homes, or at least have large walls that can accommodate Ron’s more monumental visions,” she explains. “What generates a powerful response are the strength of Ron’s designs, his bold brushwork and the vibrant color.”

Beginning in the 1980s, Kingswood was hailed as one of the bright young talents in North American wildlife art. His significant pieces ended up being acquired by, among other institutions, the National Museum of Wildlife Art in Jackson, Wyoming. Kingswood, a native of southwest Ontario and an avid birder, was also enjoying a long run of being juried into the prestigious Birds in Art exhibition held annually at the Leigh Yawkey Woodson Art Museum in Wausau, Wisconsin, and he had amassed a solid following of collectors.

Among those who sang his praises were the late American mammal painter Bob Kuhn and the famous Canadian nature artist Robert Bateman. Then, much to the shock of his colleagues and galleries, Kingswood walked away, not impetuously, but he said he needed to do some soul-searching.

Many thought he was crazy for leaving behind commercial “success” in the prime of his career and having the audacity to give no explanation other than he was tired of contributing to a genre that he said “had become inanely formulaic, unimaginative and derivative.”

“Few artists have the courage to make such a change mid-career,” Hajic says, admitting that she, too, was baffled. “But looking back on it, I believe those years Ron spent questioning himself, wandering in the metaphorical ‘wilderness’ and experimenting with abstraction have made him even stronger as a painter and will continue to set him apart.“

In seclusion, Kingswood embarked upon a bold phase of introspection and experimentation — what he calls “unlearning.” Before he could interpret nature with fresh eyes, he realized he had to deconstruct his old ways of thinking about color, design, composition and purpose that he had been taught in art school.

He continued to spend countless days in the outdoors observing, matching color to mood and even trying to sketch the breeze as it blew across the landscapes he frequented. But at art events where previously he had been a fixture, Kingswood had gone missing in action.

Only after he was pressed by close colleagues, galleries and collectors to explain his absence did he respond by penning a poignant and very public essay for the American online publication, Wildlife Art Journal. Provocatively titled “Is Animal Painting Dead?,” it riled readers’ emotions by challenging wildlife artists to aspire to be more than mere renderers of wildlife subjects, and to show that “wildlife art” could move beyond its widely disparaged cliché of being driven by translation of photography.

“For me, the ambition to achieve something loftier, something purer and genuine, was always masked by the seduction I had for the physical subject I was researching,” he said. “Perhaps another way of putting it is that I discovered I was blinded by the literal subject itself.”

Breaking free of that spell demanded that he embark upon an alternative journey away from where he had come, and where he would be headed had he remained on the same path. “It meant returning to the source — nature herself — with open, objective eyes and unearthing the potency of my own raw emotional experience. After giving up what I thought I knew, I began to communicate things that had previously been veiled, and then, at last, I found what I’ve always been looking for.”

To convey the spatial grandeur and spirit of natural landscapes, Kingswood stretched canvases across studio walls and immersed himself in color fields like an Abstract Expressionist. His paintings shifted from being about “the subjects” to everything else happening around them.

In his newfound liberation, he plunged into trying to better understand banded color, tonal harmony, varied surface textures and more complicated design elements. These efforts created thoroughly unconventional compositions that had animals and birds exiting or entering at the edges.

His new works today incorporate all of those aspects in stunning fashion. In Moon Rising, for instance, Kingswood brings a Cubist’s take to waterfowl migration across the northern latitudes. Emanating warm earth tones, the horizontal work stretches nearly six-and-a-half feet across. It portrays a flock of Canada geese in flight set against the juxtaposition of mass and negative space — a Kingswood hallmark.

In Hidden, nearly 5 feet by 4 feet, he camouflages a group of avians in a dense tangle of grass and thicket, requiring the viewer to break the aesthetic code. In Nightfall, his nocturne portrayal of a tarn at sunset serves as a meditation on time. And in Autumn Song of the West, sandhill cranes serenade us from a muted sanguine sky.

“His compositions aren’t intended to provide a tidy, self-contained narrative. That’s the joy of being an artist — demanding that viewers use their own imaginations on the most basic level,” says Susan Simpson Gallagher who owns a namesake gallery in Cody, Wyoming. “The irony is that Ron is one of the most sophisticated painters I’ve ever come across. There is a level of intelligence in his work that is mind-boggling.”

Hajic was one of the first to bring Kingswood’s work to the attention of Western art collectors 20 years ago and is one of the reasons why a few of his major pieces hang today in the permanent collection of the National Museum of Wildlife Art where she — and Simpson Gallagher — were once chief curators. “Yes, when it comes to challenging the status quo and pushing the envelope of traditional nature painting, Ron definitely walks his talk,” Hajic says.

“Ron Kingswood is not a conventional ‘wildlife artist,’ and there is a lot of eager anticipation surrounding these new works,” says Swedish-American animal sculptor Kent Ullberg, renown for his wildlife monuments. “Ron is like no one else. He isn’t normal. He is extraordinary.”

When pressed to describe his stylistic influences, Kingswood says he relates more to a very talented group of contemporary animal sculptors and carvers. The group includes Ullberg, Steve Kestrel, Tony Angell, Walter Matia, John Sharp and Englishman Simon Gudgeon. “They are making art that speaks to people in this century. It isn’t passé. It’s innovative and exciting,” Kingswood says.

“Of all the living wildlife painters, he has one of the greatest senses of abstract design and contemporary treatment, yet when he does make a representational portrayal of wildlife, it is with total understanding of his subjects,” Ullberg says. “Some contemporary artists, especially city dwellers who have had little genuine contact with nature, just throw animal imagery into their scenes and it doesn’t have impact. He’s not trying to give the viewer a cheap thrill. Ron paints what he lives and that gives it truth.”

When Kingswood ended his self-imposed hiatus in 2014, his first showing was of wildlife scenes at Jonathan Cooper/Park Walk Gallery in London. The brisk sales there represent an auspicious precedent for the Peters show.

“Ron has an individual contemporary vision. I see what he does as the natural progression of the greats that have come before him — those artists that stirred the soul and make you want to know more,” says Jonathan Cooper of the enthusiastic response the painter received in the U.K.

“There is a great honesty and artistic ability in Ron Kingswood’s unique interpretation. Nature has never been more important and we all know how it is under threat,” Cooper says. “His work makes you stop in your tracks to admire the beauty and then it makes you think.”

As for the artist himself, Kingswood draws upon the wisdom of Abstract Expressionist Mark Rothko: “Art is an adventure into the unknown world, which can be explored only by those willing to take risks.” 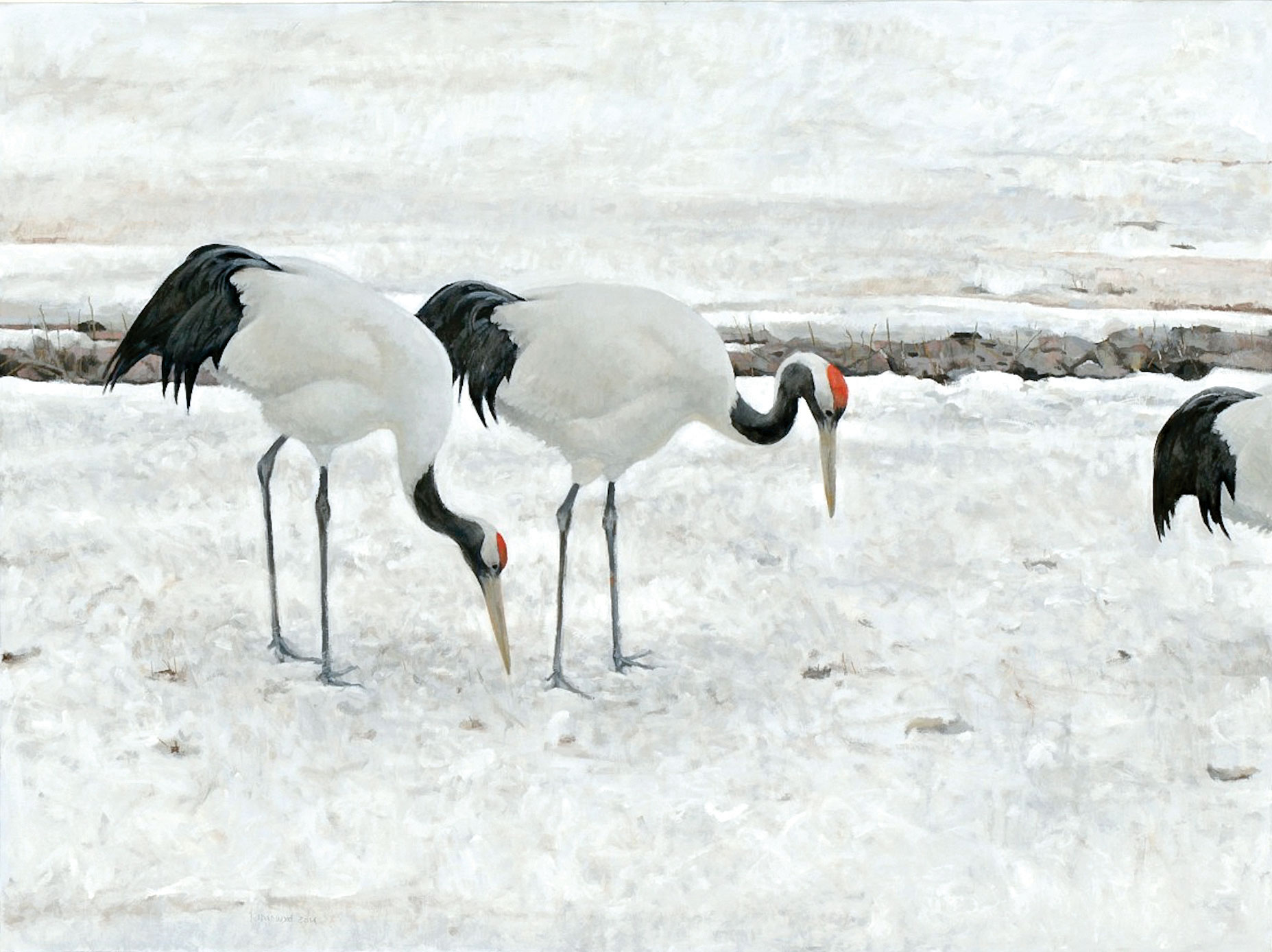 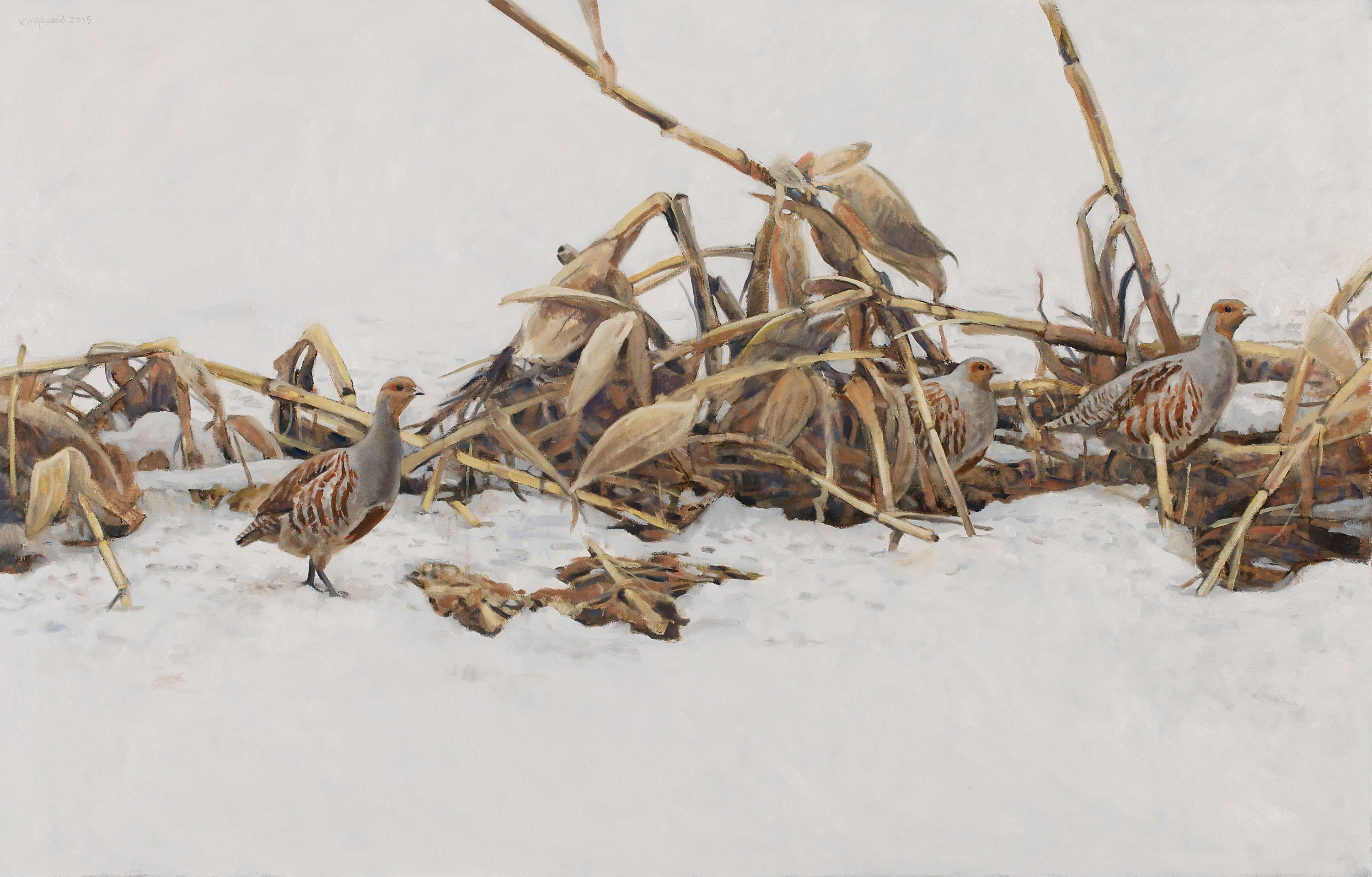 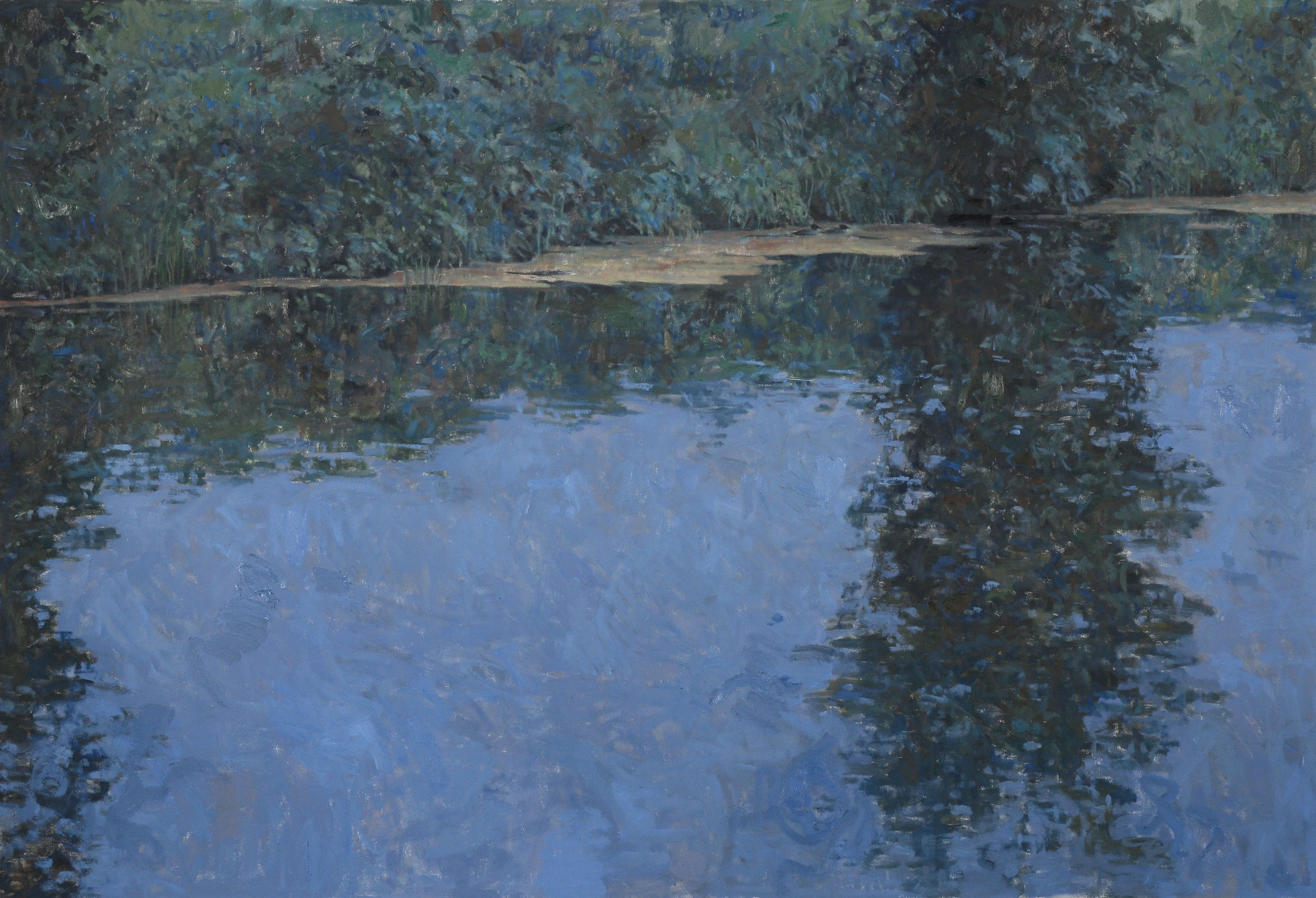