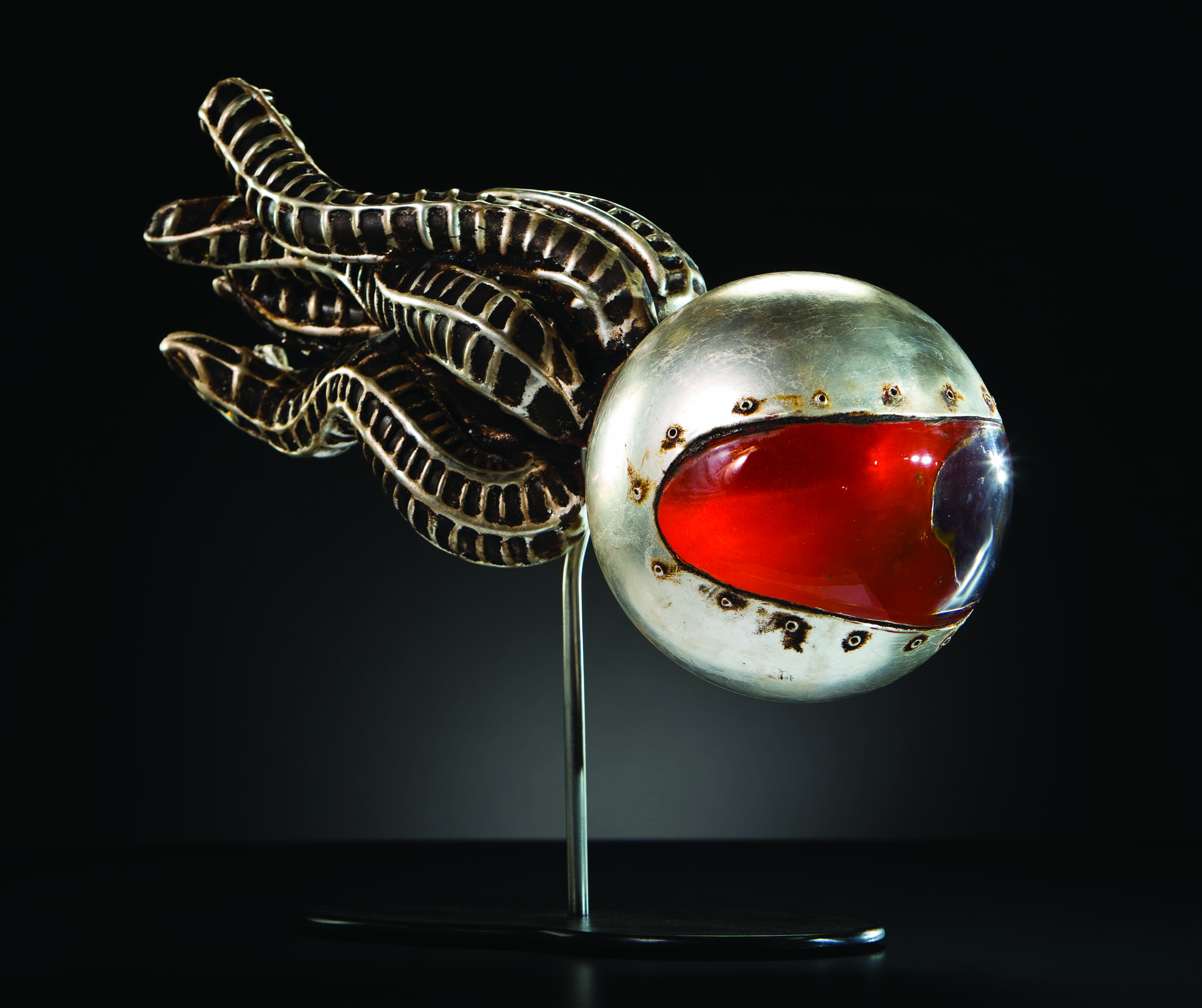 Rik Allen is 6-foot-8, 45 years old and talks in a burnished, resonant baritone, and thus is unlikely to be mistaken for a kid, were it not for the overwhelming evidence to the contrary erupting all around him in his studio. Rockets are everywhere. Bulletlike rockets, squid-like rockets, rockets that look like flying eyeballs and rockets that appear to have been inspired by early Edison light bulbs. For diversions there are model cosmonauts and insectile planetary probes and a full-size Faraday cage designed to cuddle a volunteer in a 5-million-volt electric halo.

Allen admits the obvious: “It’s kind of an extension of my adolescence. There are times I look at it all and think, ‘I can’t believe I’m making this stuff.’ But it all feels very real, very honest in my mind.”

He seems profoundly happy in his work. He’s also fortunate. His artistic fantasies just happen to coincide with a fascination deeply embedded in our culture and psychology: space, the ultimate frontier. Some of his rocket sculptures have found their way into the personal collection of Jeff Bezos, whose Amazon fortune is funding a secretive space exploration enterprise called Blue Origin. Rod Roddenberry, son of “Star Trek” creator Gene Roddenberry, commissioned a glass-and-stainless-steel interpretation of the iconic starship Enterprise.

Allen’s sculptures obviously aren’t literal interpretations of rocket architecture. At a quick glance they seem merely comical, images lifted from 1960s sci-fi movies and then exaggerated, with plumped-out waistlines and oversize cockpit bubbles. But there’s more going on here than wit and whimsy. Most of the spaceships include a kind of brownish grunge around the seams — it’s intentional oxidation of the silver foil wrapped around the glass forms — and the effect is that of well-used, almost derelict space vehicles. They look ancient and futuristic at the same time, and the tension between the two antipodes leads the viewer to contemplate just what these forms might mean. Are they atavistic? Is a rocket-propelled future ingrained in our past? These thought-paths will drive you a little nuts, which Allen doesn’t mind.

“At one of my last openings, a person said, ‘This piece is really psychotic … but I mean it in a really-good-way-psychotic.’ I eventually took that as a compliment.”

Probably that viewer had been peering inside one of the spacecraft, where baffling things happen. Allen loves to construct paraphernalia like tiny ladders to nowhere and chairs — not proper rocket-captains’ chairs, but silly ’60s dinette chairs with shiny red vinyl seat pads — and install them inside. The idea, Allen says, is to provoke people to construct their own narratives.

Occasionally Allen will provide a narrative, which illustrates how his free-associating mind works. A rocket titled Franklin IV features an antique key suspended in the cockpit, surrounded by four wire-mesh hemispheres that look like small kitchen strainers. It’s a riff on Ben Franklin’s experiment with the wet kite string and the key: The strainers and the key are to gather the universe’s ambient electricity, which would then provide the energy to run the rocket.

Despite the dubious science in this scenario, Allen is a smart and well-rounded guy who actually has a grounding in science. He built model rockets as a kid, of course. He loved physics, and might have gone that direction except that the math was over his head. Instead, he majored in anthropology, but stumbled into art through electives in drawing and pottery, “and I realized I was pretty good with my hands.” After graduation he moved back to his native Providence, Rhode Island, and apprenticed for several years with a succession of established glass artists, learning technique and trade from the ground up. In 1994 he came west to work as a teaching assistant and technician at the Pilchuck Glass School near Seattle. Making intense use of the school’s hot shop on weekends, he evolved his distinctive style and niche.

The first rocket materialized around 2000. He was making vessels with removable lids, but he was getting bored with making their lids fit. One rotund, pointy vessel whimsically sprouted tripod legs, and lo, a rocket was born.

While at Pilchuck, Allen met Shelley Muzylowski, a painter and glass artist from Vancouver, B.C. They married in 1998 and bought a 1918 country farmhouse 70 miles north of Seattle. They share the expensive furnace facilities, but work separately. Shelley Muzylowski Allen’s glass sculptures are horses — mythical, iconic, poetic — and aside from one curious steed with a rocket-assist pod strapped to its back, evince no interbreeding with her husband’s proclivities.

So, a pair of artists who’ve built entire careers around horses and rockets? 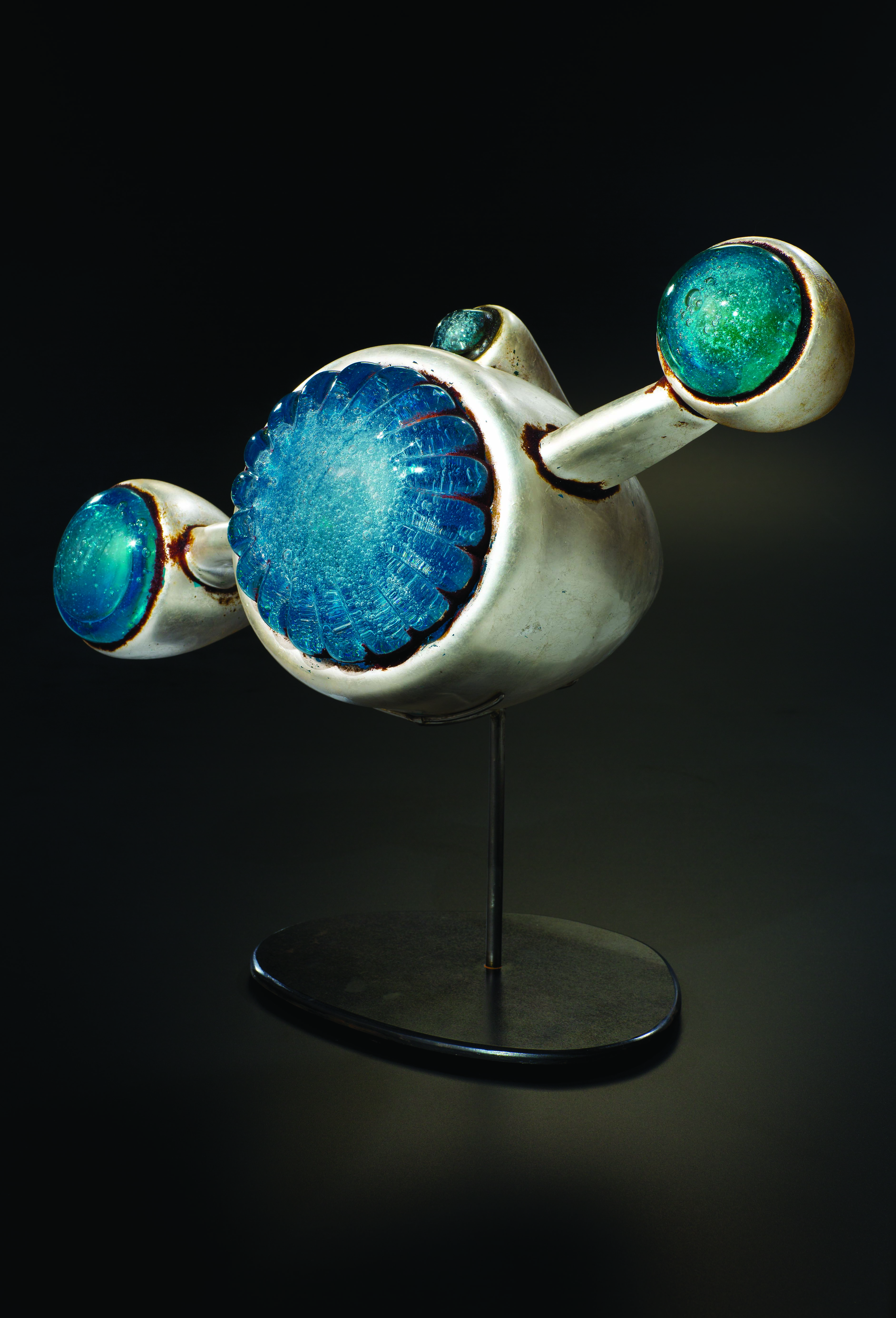 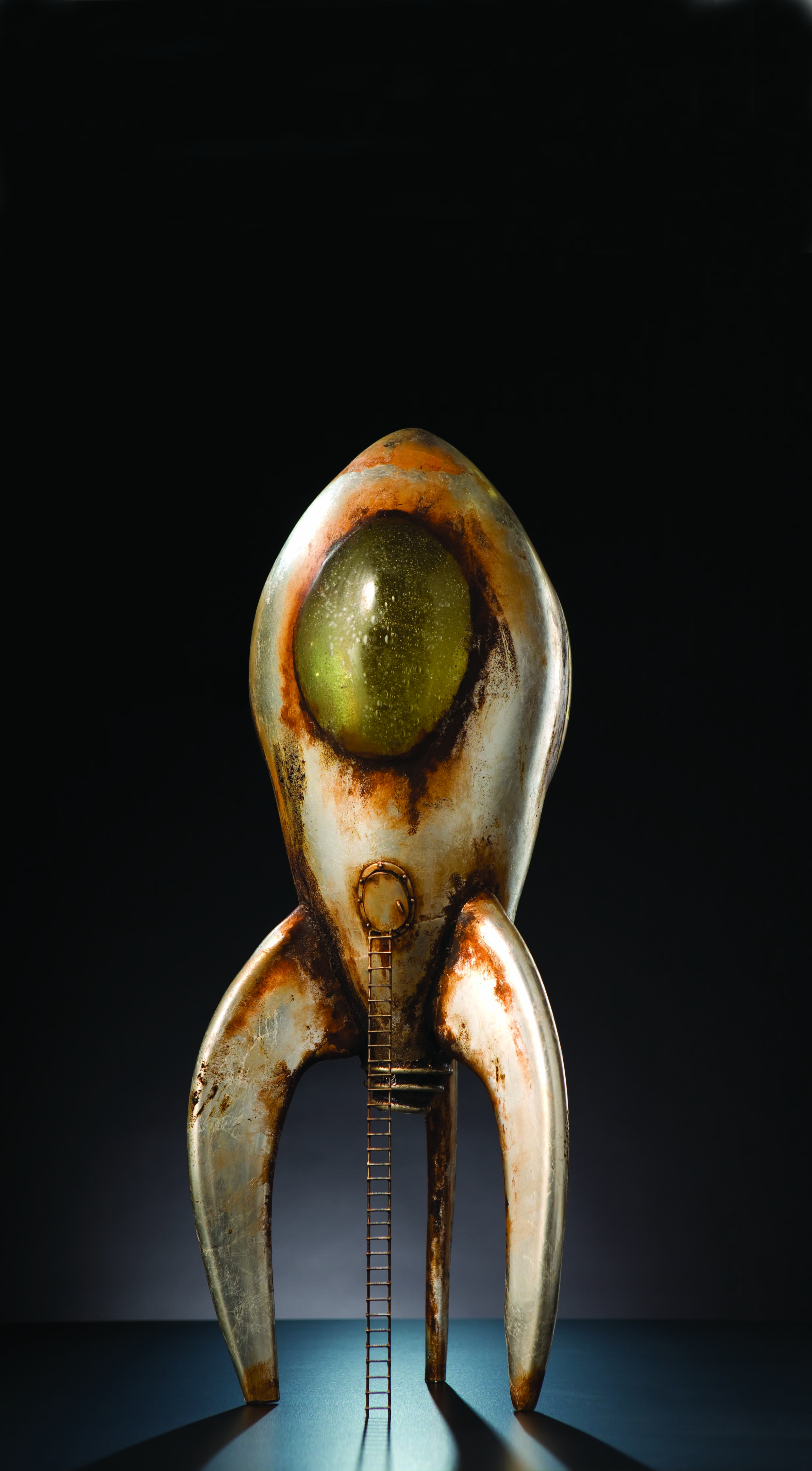 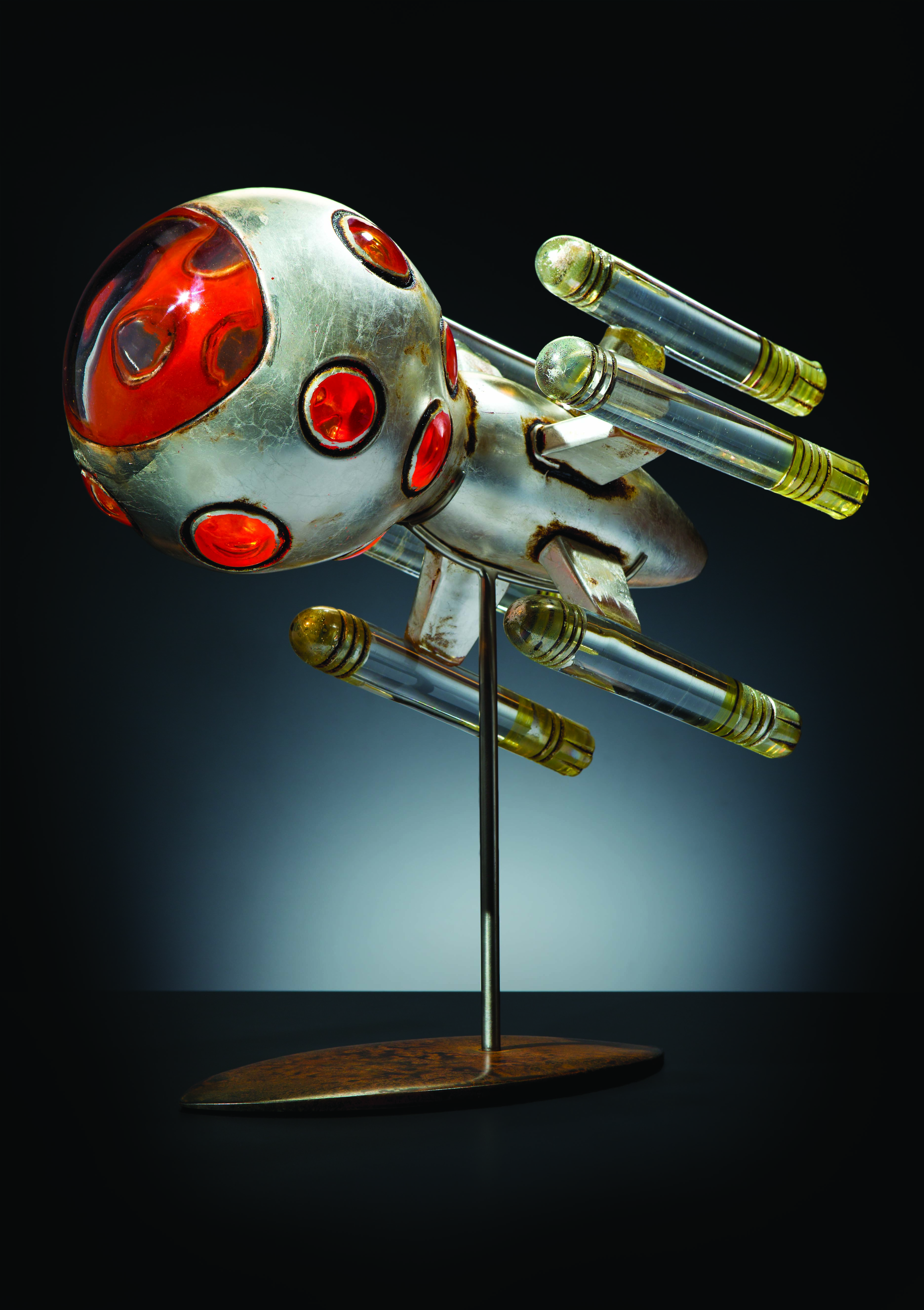 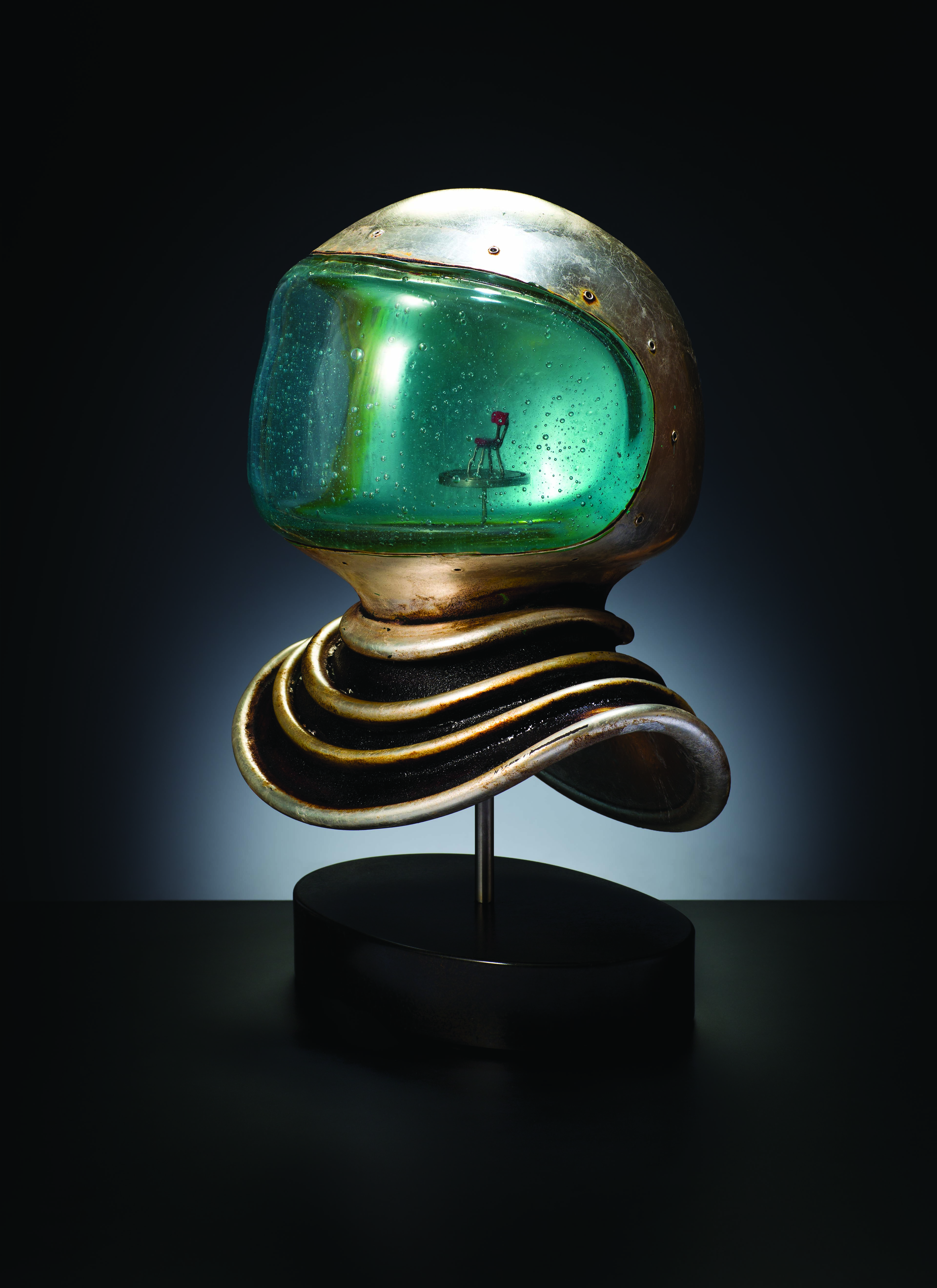