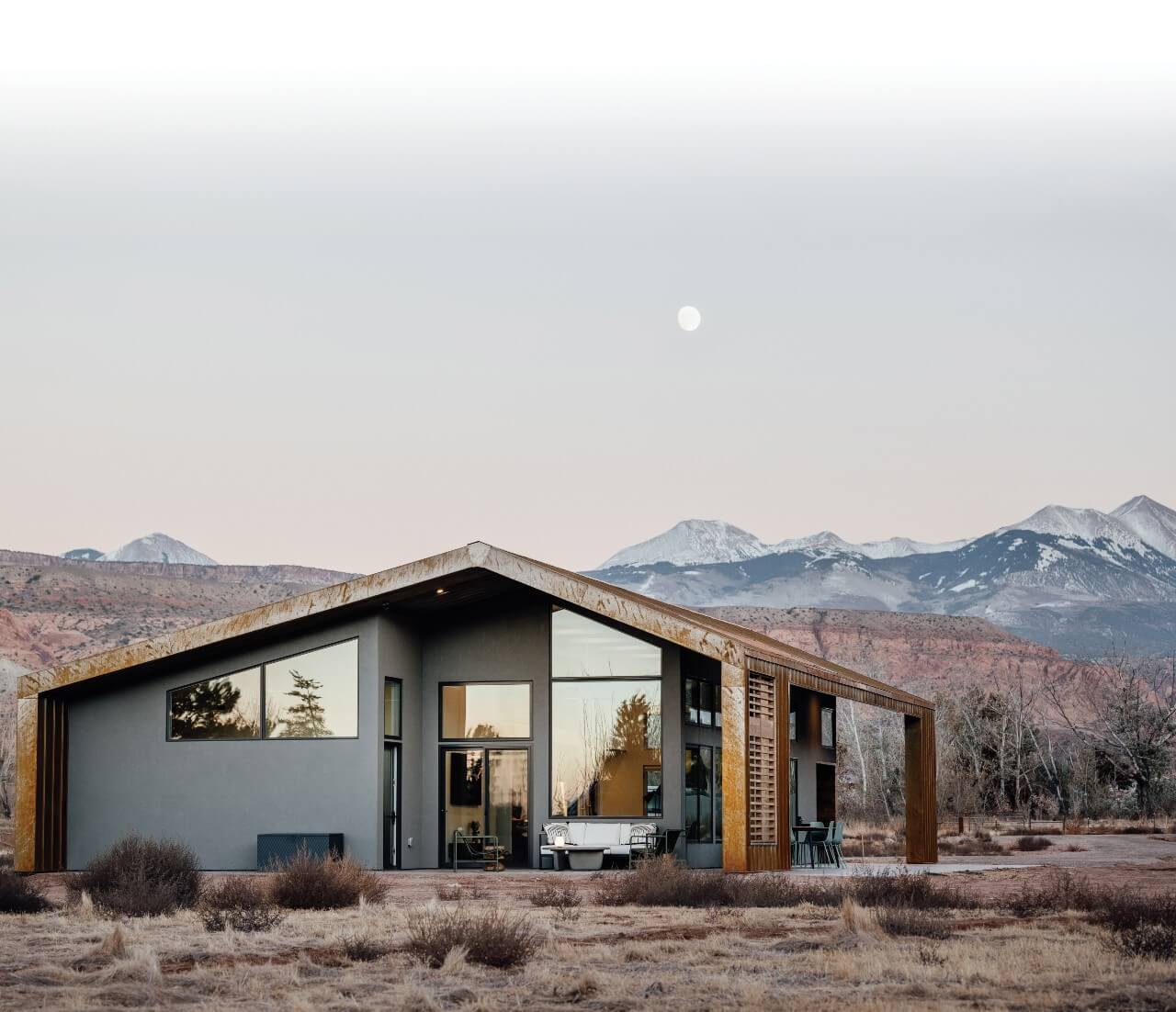 With Arches National Park to the north and Canyonlands National Park to the southwest, Moab, Utah, is known as a destination for outdoor enthusiasts and off-the-grid adventurers. Its severe beauty and geographical grandeur are unlike anywhere else in the West, and the town itself maintains the quaint feel of an outpost, even with its consistent rise in tourism. For a Salt Lake City, Utah, couple, the town was a clear choice as the location for their future dream home.

“I’ve been going to Moab regularly for the last 30 years,” says the husband, who shares a passion for the outdoors with his wife. “About five years ago, when we started thinking about where we wanted to plant our roots, Moab came up, and it was an easy decision.”

With jobs that required extensive travel abroad, the couple reached out to the Salt Lake City real estate and design firm cityhomeCOLLECTIVE to help them assemble a quality team they could trust from afar to tackle the project. With help from Greg Upwall of Studio Upwall Architects, Kara Stoner and Eric Plourde of Eco Logic Design Build, and cityhomeCOLLECTIVE’s interior designers, they embarked on a journey akin to the Moab experience: one that was exciting and unpredictable, with a few bumps along the way.

Completed last year, the home is nestled in Southern Utah’s Spanish Valley, surrounded by views of the La Sal Mountains and the area’s iconic red rocks. The unassuming yet intriguing structure was designed as a reflection — quite literally, as it turned out — of its dramatic desert environment. The dwelling’s metal exterior gives it a rustic feel with a grey-brown palette, allowing it to nearly disappear into Moab’s landscape. The home is wrapped by an asymmetrical, gabled roof with extended overhangs to protect its inhabitants from the harsh desert sun. The roof is made of a natural steel panel that will rust, creating a patina and pattern that references the surrounding red-orange sandstone cliffs, explains Upwall.

Carved into the home’s utilitarian form are glass doors and windows strategically placed for passive solar heat gain and panoramic views, and they also capture magnificent mountain reflections on the home’s facade. A detached 1,600-square-foot garage was integral for the couple’s active Moab lifestyle and nearly matches the home’s 1,900 square feet.

“There are certain projects where the relationship to the site is everything,” says Upwall, who also grew up making regular pilgrimages to Moab from his family’s home in Salt Lake City. “And this certainly fell into that category.”

Now based in Washington D.C., Upwall was thrilled to return to Utah for the project. During his first day on site, he arrived before sunrise to make sketches and take note of its placement in the sky throughout the day, exploring how that would impact the home’s energy efficiency, aesthetic, and comfort. “The idea was that at the midpoint of the year, the sun would rise and set on an axis with the home,” he says. “The long axis of the house is focused to the east on the point where the sun rises over the La Sal Mountains, and to the west where the sun sets over the southern Utah cliffs.”

Equally important was the visual and spatial connectivity between the interior and exterior, which hinged on capturing celebratory views within the home’s tall glass windows. CityhomeCOLLECTIVE’s senior designer Brea Valenzuela ultimately treated these framed vistas as if they were artwork. “We kept the walls really minimal so that your eye is drawn to the windows and to the view outside,” she says.

To bring his ideas to fruition, Upwall collaborated with Plourde and Stoner, the husband-and-wife team behind Moab’s Eco Logic Design Build. The eco-conscious builders specialize in high-performance homes that are suited for the Southwest climate. The company was able to minimize the environmental impact of the home with key features, such as structurally integrated panel construction and insulation, energy recovery ventilation, greywater plumbing systems, radiant floor heating, and other green features.

Eco Logic’s knowledge of the area, from climate considerations to local products, helped steer the initial problem-solving phases of the design. Early concepts were based on the homeowners’ love of Mid-century Modern architecture (also the style of their Salt Lake City home), which, paired with Upwall’s interest in mimicking the landscape’s horizon, led to flat roof lines and a modern aesthetic. But after bids came back extremely high due to limited local resources, the team was forced to regroup. As a solution, Eco Logic suggested the metal-pitched roof, because it was an efficient use of material and its angled surface was better suited for heavy high-desert snowfall. “The objective of good design is to stay true to a concept, while, at the same time, remaining open to different ways to achieve it,” says Upwall.

The resulting structure includes a rugged exterior that’s balanced by a soft and airy interior, minimally designed with furnishings and finishes selected by Valenzuela and the homeowners. “It all came together in such a way that when you walk up to the exterior, it feels rough like the desert, but when you walk inside — it’s an oasis,” says Plourde.

The interior’s vaulted ceilings and open floor plan allow the homeowners to inhabit the space along the same playful pathway as the sun, from morning coffee in the peaceful common area to evening reads in the secluded loft. Most importantly, the flow of the home from interior to exterior feels seamless and easy, which the whole team agreed is the goal when designing in a location like Moab.

“Whether you’re consciously thinking about it or not, you’re connected to the environment just by being in the home,” says Upwall. “Spending a day there means you’re impacted by the movement of light and the change of the season — and that’s very much intentional.”