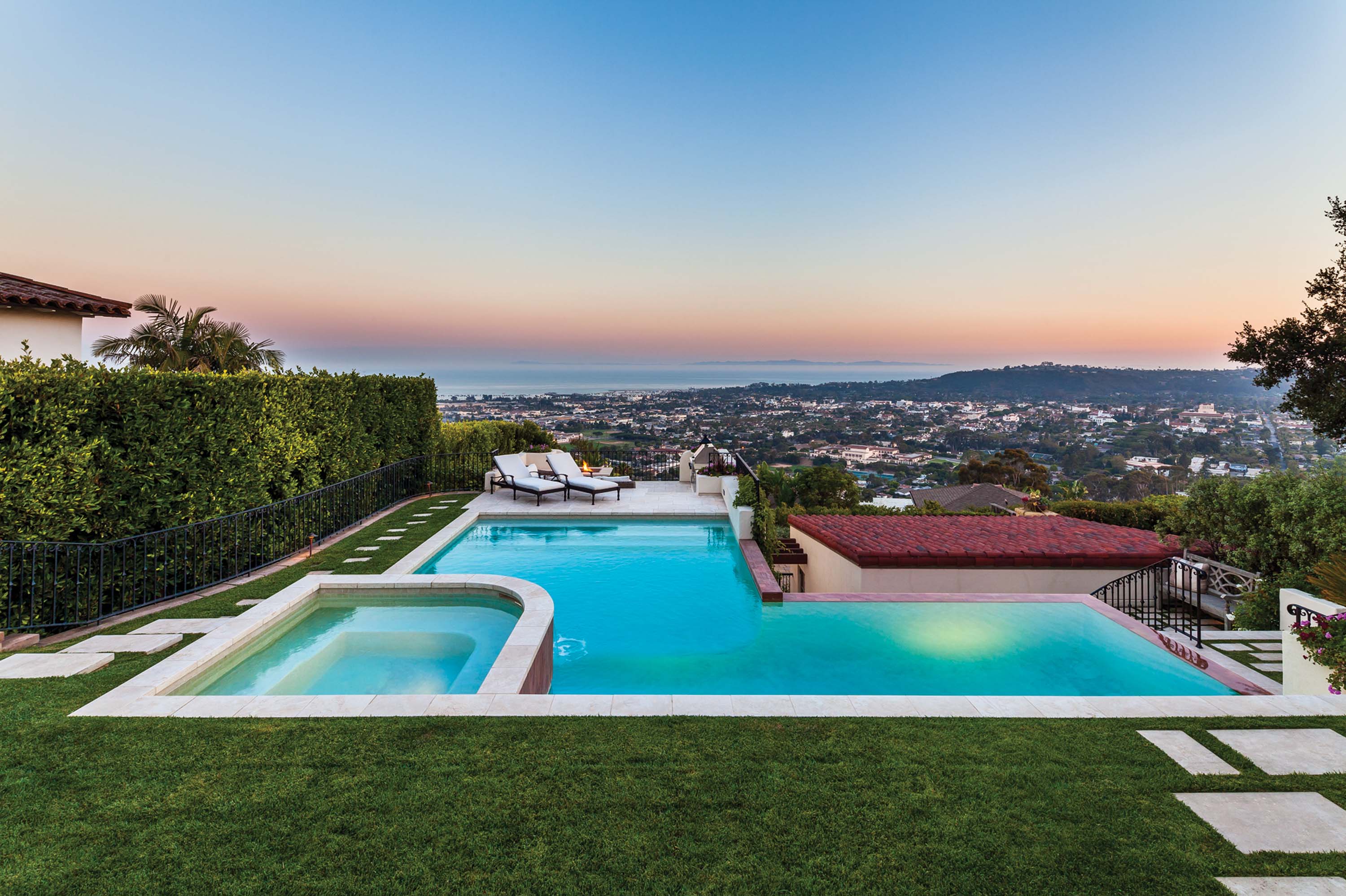 What to do with a 16-foot elevation drop between the front door and driveway? That was the dilemma for the owners and architects of this Spanish revival gem. Architects Blumer and Aurell opted for a gradual step-up process that introduces a new architectural feature at each level, ending with a panoramic view. (Click image to expand.)

On a high ridge overlooking the city of Santa Barbara, with its red-tile roofs and harbor that curves around like an embrace, a Spanish-style gem has come into its own. Limestone terraces and steps that climb gradually up a hillside, coupled with a turquoise pool reflecting the area’s almost constant sunshine, make it difficult to believe this was once a Mid-century forgettable with a willy-nilly front yard.

Josh Blumer and Clay Aurell of AB Design Studio changed all that. Blumer recalled the first time he worked on the house. Sitting beneath the original front yard trellis with partner Aurell and a previous owner, they kicked around ideas. “[The early owners] didn’t place a lot of importance on the site,” Blumer says. “Over the years it was kind of cobbled together,” with a pool way down by the road and an unceremonious front door.

The initial design problem centered on achieving the 16-foot elevation drop in front while still making it a luxury home. For a solution, Blumer reached back to his youth when he spent time on the Greek island of Santorini and along Italy’s Amalfi Coast. He recalled how entire villages were built on hillsides, overlooking bays and seas, without sacrificing an iota of design aesthetics or view.

“What I noticed about those experiences was that it was beautiful, and you didn’t notice the elevation changes. It was kind of this meandering quality where you wind your way up and there is a natural progression of architectural elements and it doesn’t feel like you’re going up a ramp.”

With that as a template, he and Aurell began to sketch, incorporating the owner’s program — which included a garage, exercise room and pool that would be more connected to the house. To do that, the architects would have to bring it up to the same level as the home.

With challenge comes opportunity, and Blumer saw exactly that after he placed a garage and exercise room on the same level as the road. A small opening between the structures allowed enough space for a staircase and the beginnings of that seaside village effect. Starting with a wrought-iron gate and a trellis over-head (from which boughs of bougainvillea will one day spill) this initial set of steps leads to the back wall of the newly configured pool. Wrapped in bronze-colored Saltillo tile over which water falls, the effect is luminous and modern. From there, another set of steps ascends to where the blue of the pool, house and patios are revealed. And then you turn.

“What happens is, you get up here and once you’ve achieved all that you turn around and you’re looking at the whole coastline. And it kind of takes people by surprise.”

In that first phase of work, Blumer and Aurell’s efforts did not extend to the interior. But in 2010, Debbie and Gary Convis came along and fell in love with the possibilities.

“They loved how charming [the house] was. They loved having the perch above the view,” recalls Blumer. They also had ideas of how to make it even more charming, how to take it to its final stage of perfection.

Working with the metal fabricators and contractor Dan Ribbens, Debbie integrated the interiors into a single point of view, providing the Spanish character but without surrendering comfort or a sense of fun. The master bedroom, bathed in natural light, has a distressed wood-and-iron headboard and a small Juliet balcony that faces the ocean. A new guest suite has a custom iron bed frame to tie together the wrought-iron light fixtures, chunky ceiling beams and dark wood doors.

“A property like this, if you listen carefully, it will tell you what it wants to do,” says Blumer. “There’s a process of pulling away everything that’s not it … and then stepping back and letting it kind of reveal itself to you.” 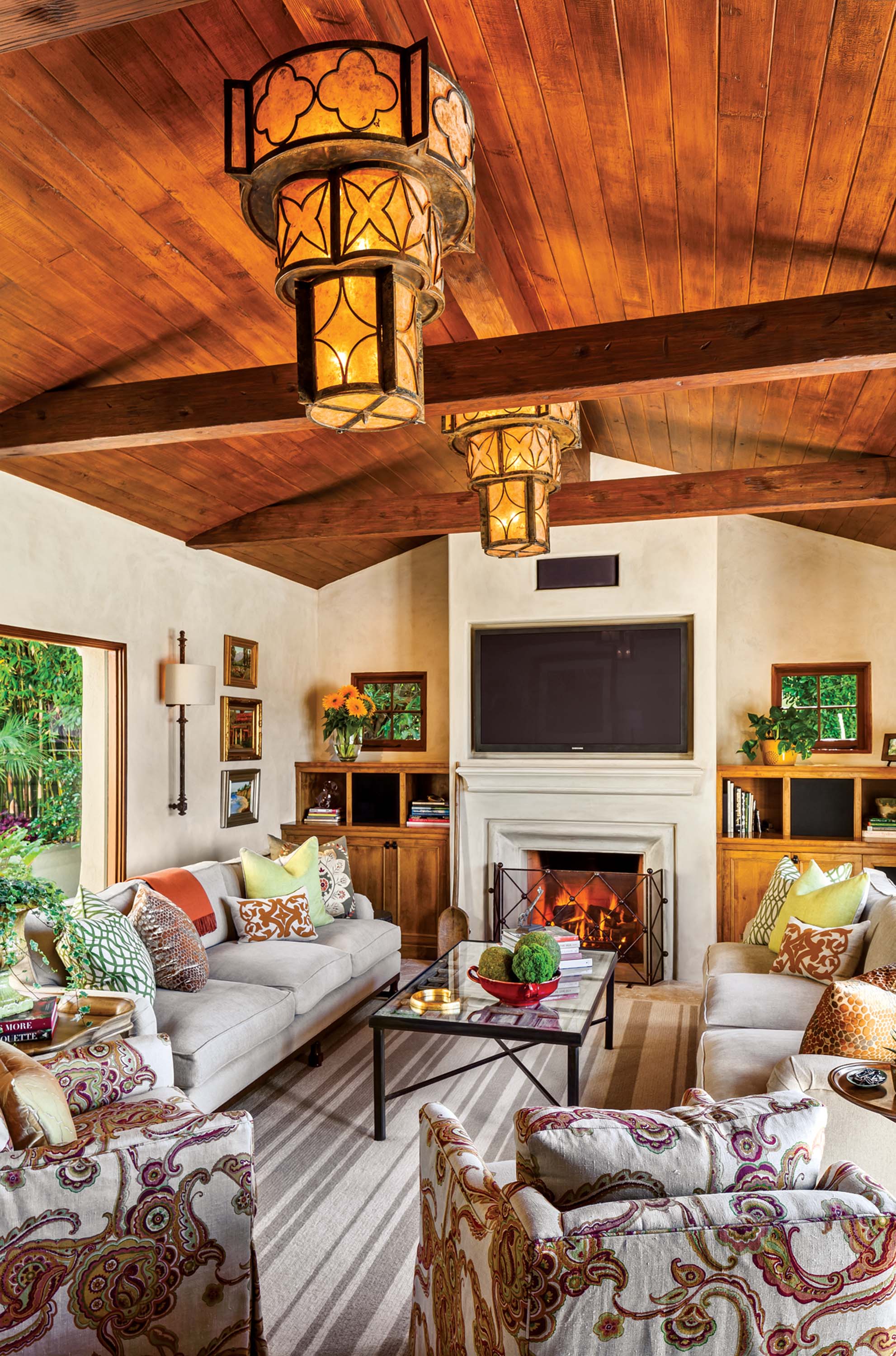 Additional veneer was added to the living room ceiling to give it a heftier, brighter look. But the caramel-colored glass and iron light fixtures lend a playful feel to the room that’s enlivened even further by a variety of colorful fabrics and pillows. 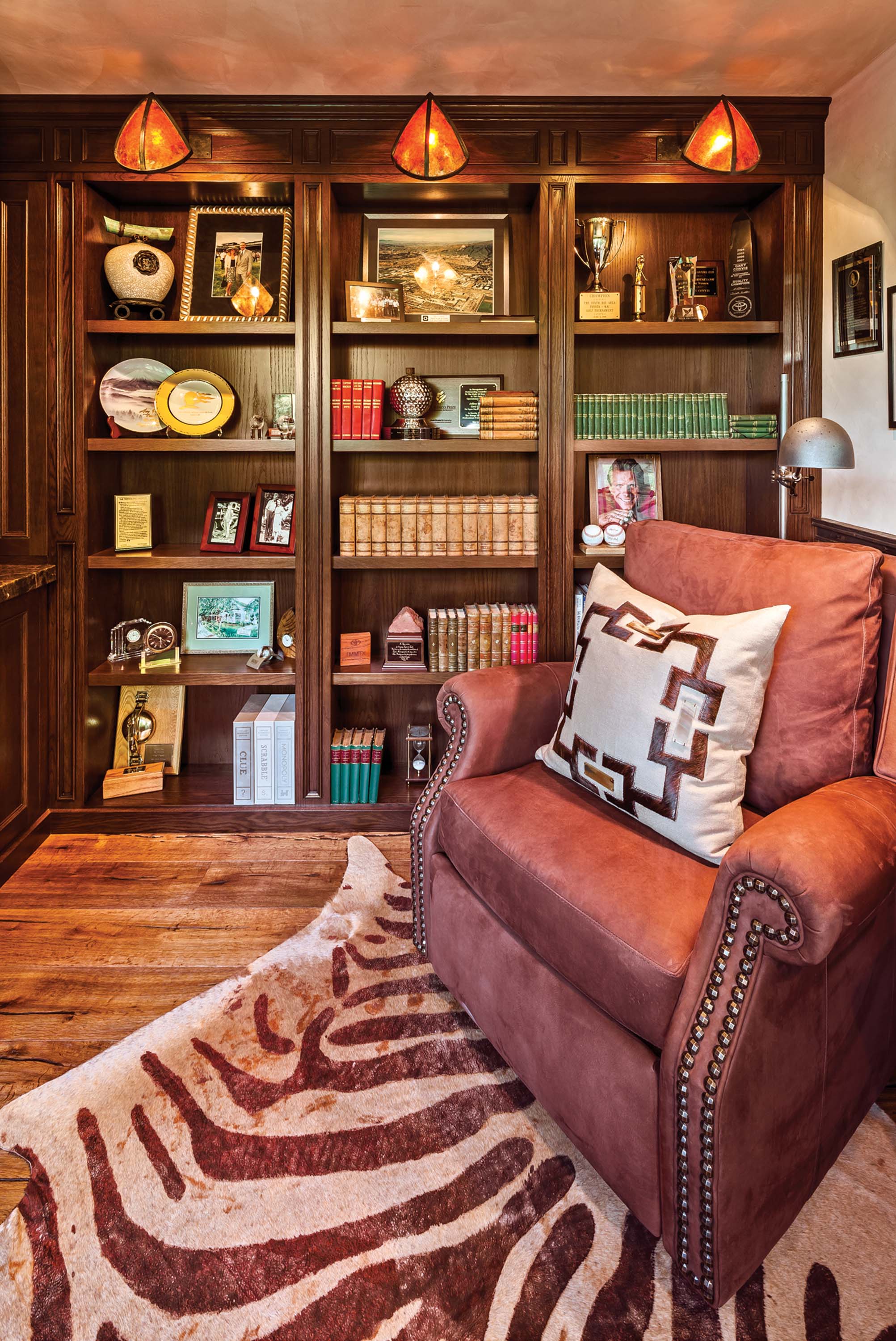 Lights shaped like hats and an animal-skin rug add texture and color to the newly added study. 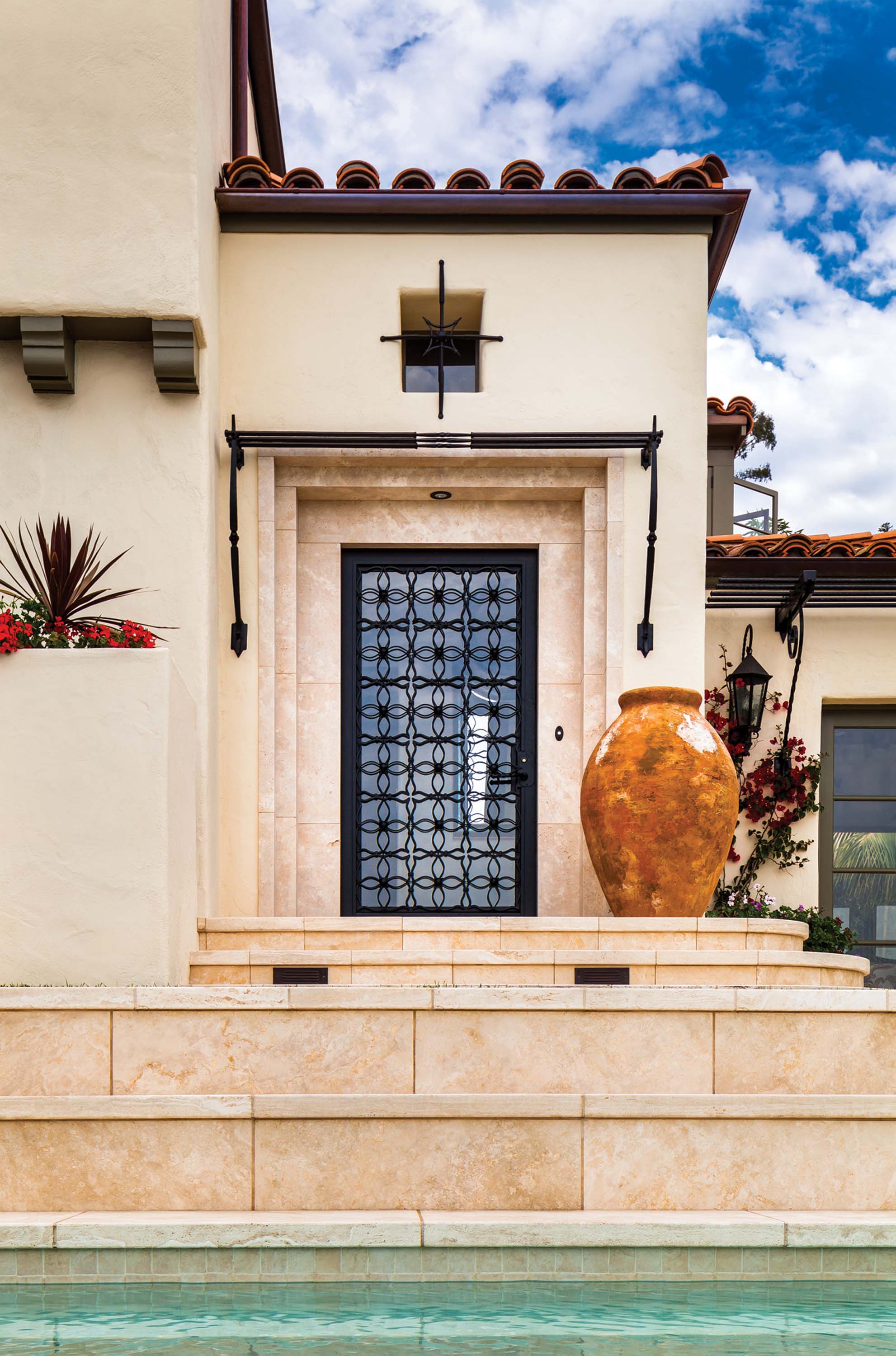 The front entryway went from ordinary to stunning when architects created a small tower. The custom wrought-iron and glass door and awning hint at what is across the threshold. 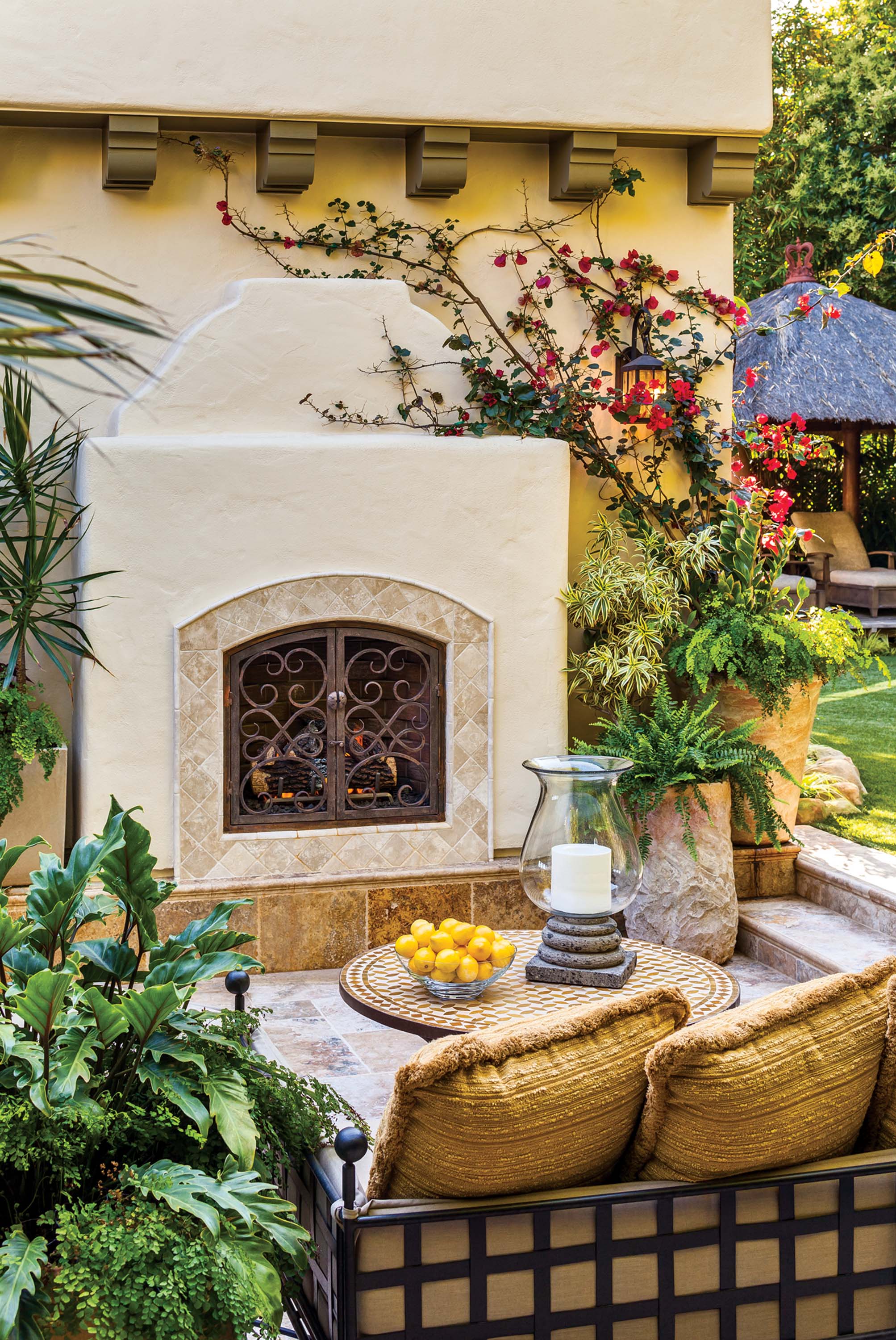 Custom wrought-iron light fixtures and embellishments, chunky wood doors and decorative tiles give this house its Spanish flavor. This outdoor patio is softened by climbing bougainvillea and abundant cushions. 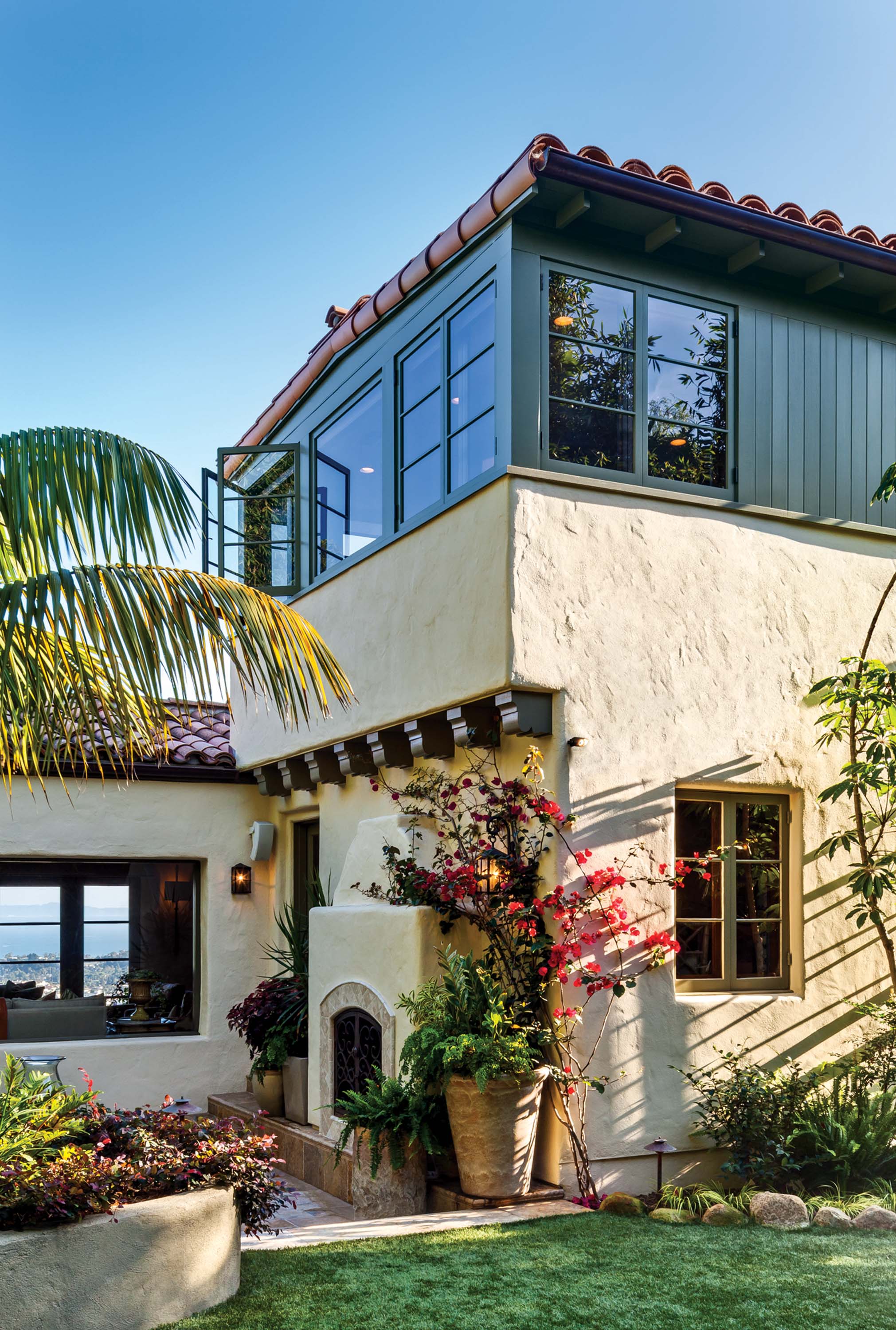 Blumer and Aurell added a second-floor study, with wood siding and corbels to break up the beige stucco. 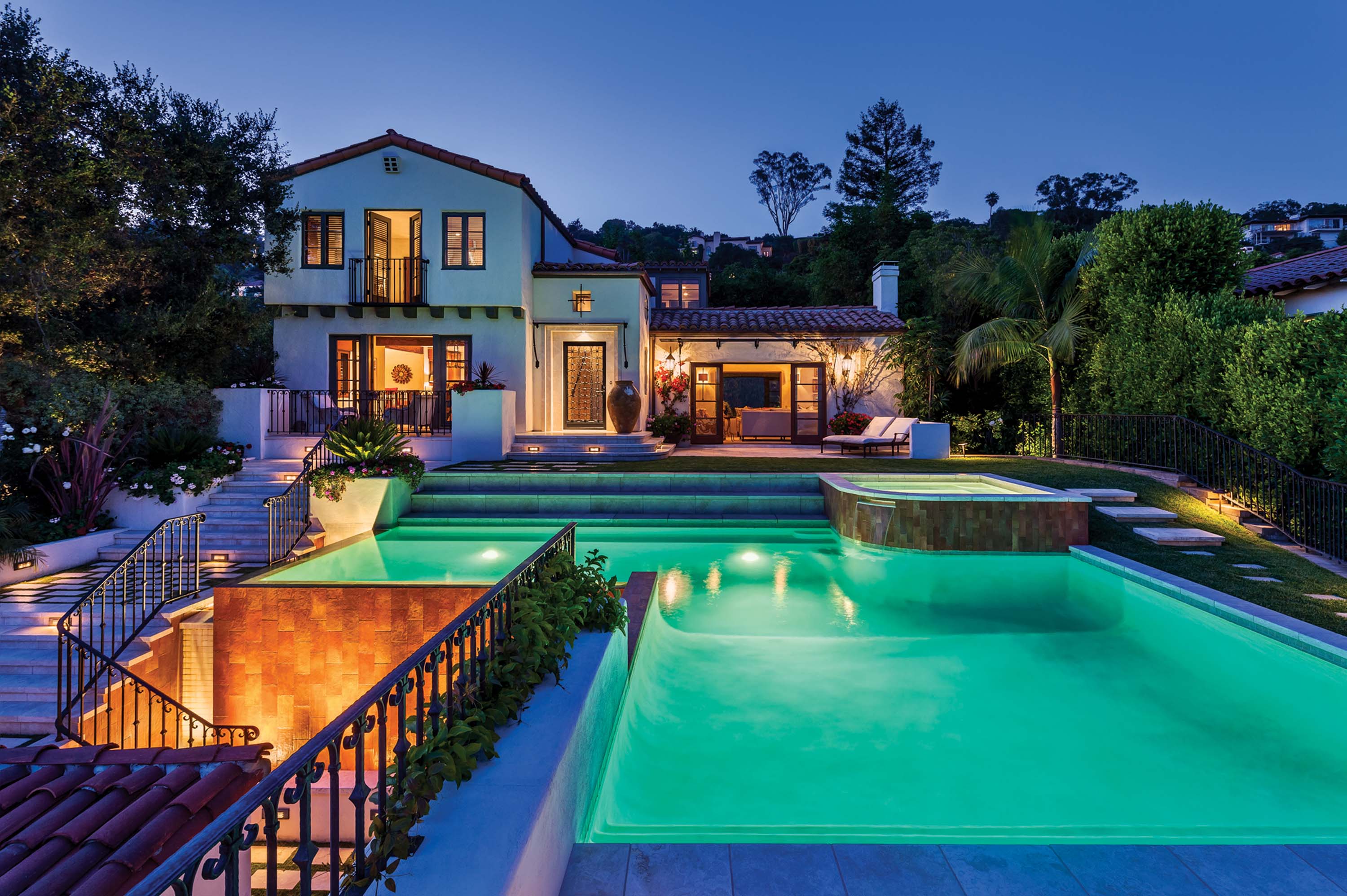 Water from the infinity edge pool flows down the rust-colored tile wall, becoming iridescent at night. 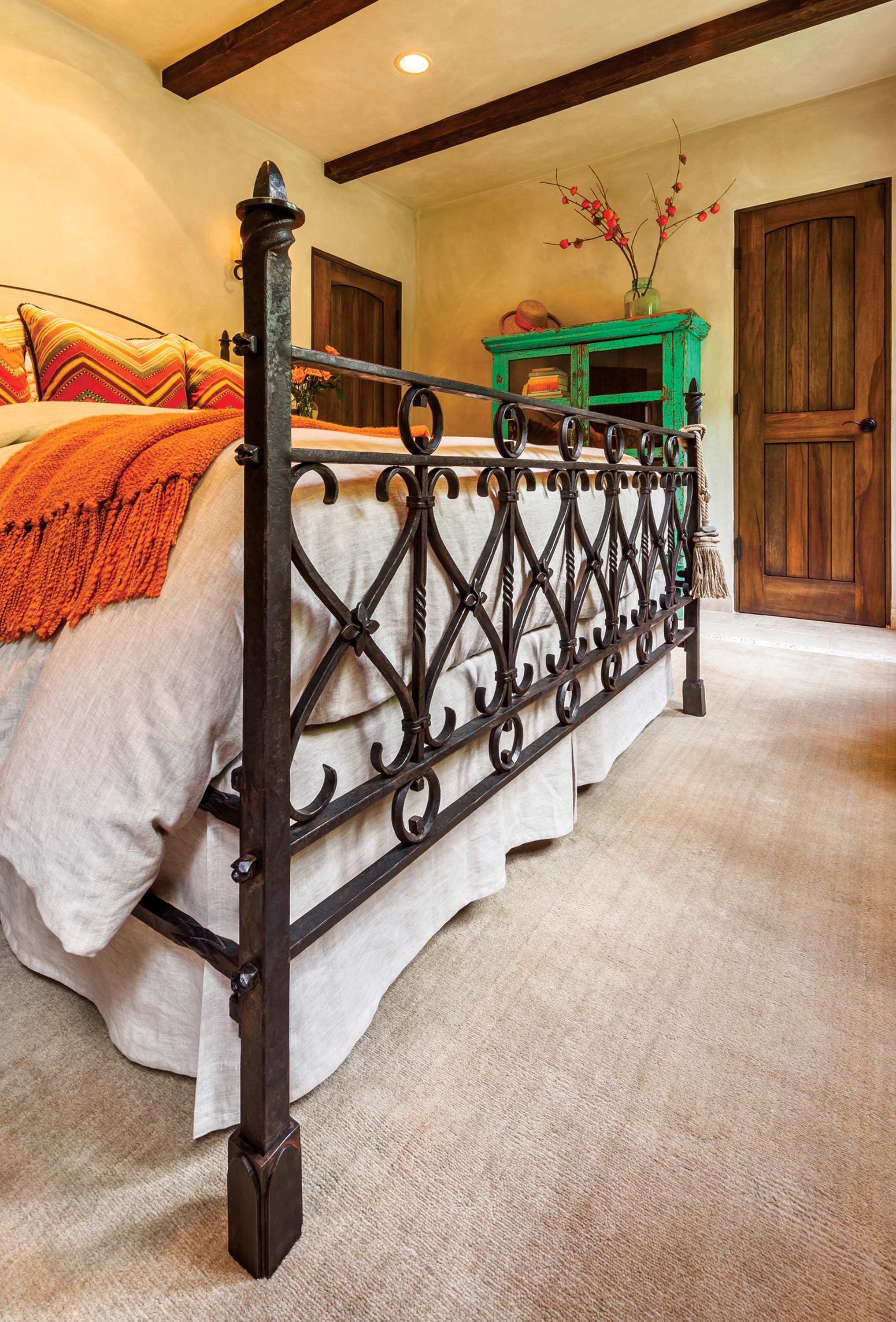 Sunlight through the front door makes fanciful designs on the limestone floor and ceramic tile bench in this tower-like entryway. 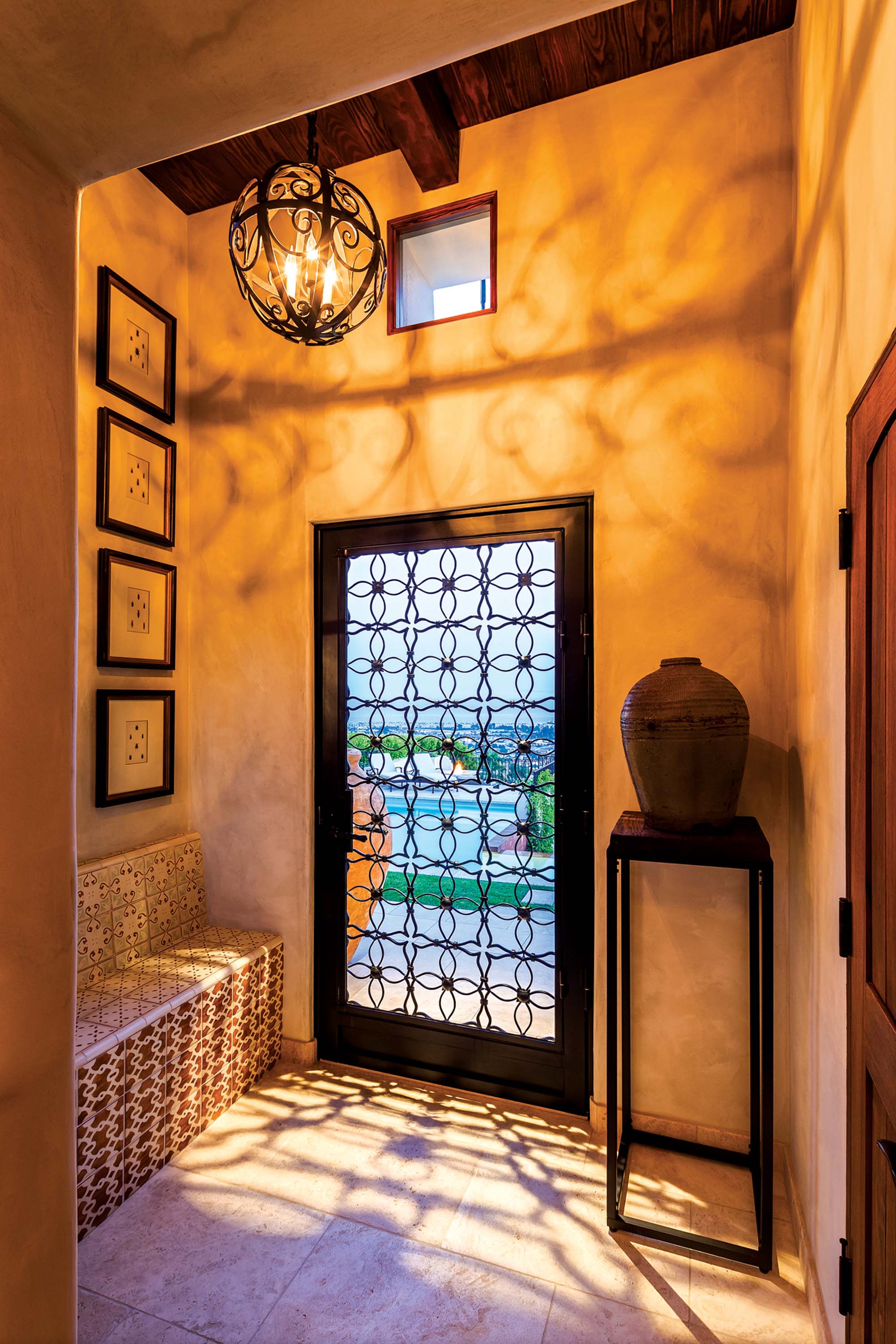 All the bed frames in the house were designed to complement light fixtures and rustic wood.