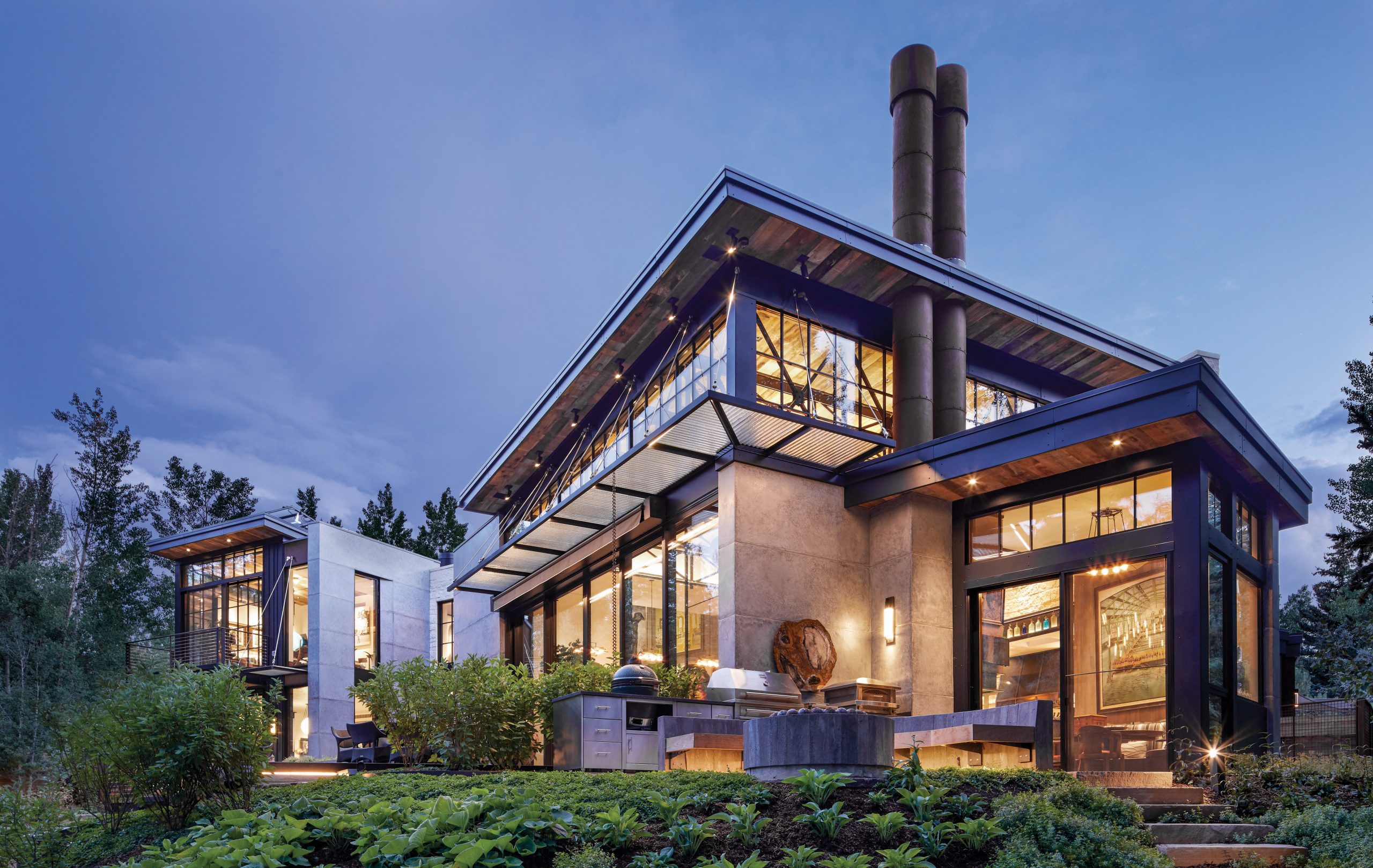 The home’s modern and industrial flair combines the owners’ love of craftsmanship and the building process, as well as a desire to incorporate elements of history, such as old barns, train depots, and cast-iron machinery. The antique glass awning that extends off the main living area came from a military base.

Imagining a home can be tricky. This is especially true for art aficionados with an ever-evolving collection of paintings, sculpture, antiques, and collectibles. In these cases, they frequently find themselves challenged by the idea that collecting demands not only an insatiable curiosity, but on the more practical side, a need for adequate space, lighting, and a display venue that offers multiple points of view for appreciation. It’s a tall order for an architect, particularly when the client’s enthusiasm for art and design is equal to their interest in and knowledge of the practicalities of building a home.

Aspen, Colorado’s Zone 4 Architects was issued such a challenge when principals Bill Pollock and Dylan Johns were approached by recently retired real estate developers Jeff Grinspoon and Jon Foley to design the home of their dreams — “the home we intend to live in forever” — along the banks of the Roaring Fork River, a few miles from Aspen’s downtown. In addition to incorporating a large and diverse art collection, the architects were also tasked with designing a home that would merge the homeowners’ desire to integrate vestiges of their past and present into one cohesive structure. 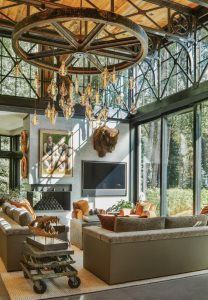 Exposed metal beams and gears in the living room were designed and fabricated to look like industrial garage-style doors. Clear bulbs of all shapes and sizes are suspended from a giant gear mold, reinforced by a steel substructure.

“Jeff and Jon presented us with an architectural challenge that took us all a long time to figure out,” explains Johns. “For example, Jon’s Kansas roots manifest themselves in his love of old barns, train depots, and cast-iron farm machinery, while Jeff brought an insatiable curiosity about craftsmanship and the building process.”

At first, says Foley, they thought they wanted a European farm aesthetic. “We didn’t know exactly what that meant, but we knew it embodied cool stuff that had been around for a while and was super functional,” Foley says. Grinspoon agrees, adding that the steel and glass construction they found so appealing in Chicago’s historic buildings was a big inspiration. “We didn’t want to inject it with too much steampunk [referencing the design style that combines historical elements with technological features], because we knew that would simply be too out of place here in the mountains.” 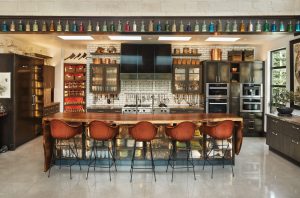 The island bar top is a hand-picked slab of California Claro walnut. Collections of antique meat cleavers, chocolate molds, and Moroccan spice racks adorn the walls and shelves of the kitchen and pantry. Behind the cooking range is a backsplash of handmade subway tile.

At 10,000 square feet, the five-bedroom contemporary home is an architectural tour de force and a work of art, inside and out. A board-formed, two-story concrete wall, itself an homage to creativity and structural integrity, serves as the central organizing principle around which the home’s public and private spaces are arranged. Curved ever so slightly to embrace the communal indoor and outdoor gathering areas, the wall is a significant visual showcase upon which an array of paintings, antiques, and collections are displayed. 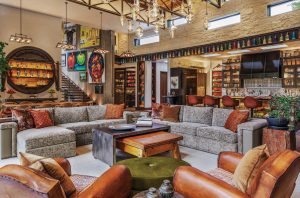 The owners have 740 pieces of inventoried art, and all of it, they say, informed the design of the home. In the living room, an eclectic mix of antiques, fine art, and personal collections meld seamlessly with rough-hewn Texas limestone and poured-concrete walls. An inset steel I-beam, supporting the length of the open kitchen, serves as a display shelf for a colorful selection of antique glass seltzer bottles.

Between the main floor and the upper level, cantilevered wood stairs encased in hand-sewn leather treads hover off the wall, floating upward toward a catwalk from which the homeowners and their guests can survey the scene below. No ordinary landing, this one is constructed of Starphire Glass, sometimes called “low-iron glass” because it contains only 10 percent iron. The result is an ultra-clear view — from above and below — that is not for the faint of heart. Overhead, exposed steel beams and trusses establish an industrial-style framework in the vast two-story space, while panes of glass capture the shimmering array of light and shadow. 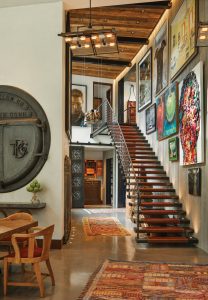 Floating metal stairs emerge from the concrete wall. The center of each tread is wrapped in leather and hand-stitched.

“We like to incorporate a lot of things that we find in our travels,” explains Foley, gesturing to a glass awning that extends perpendicularly from the house over the living room deck. “This is just like the one at Chelsea Market in New York. It’s 100 years old, and we found it at a military base.” Coincidentally, it was at the same military base where the two men got the idea to use weldable #11 rebar for the central handrail fixture both inside and outside the house.

While the public spaces were sized to accommodate large groups, Grinspoon and Foley’s attention to detail and personal interests have transformed the home into a comfortable and highly creative environment where almost everything — from the art on the walls, to the custom light fixtures, to the stand-up desks in their individual offices — has a unique story related to its creation, aquisition, and display. 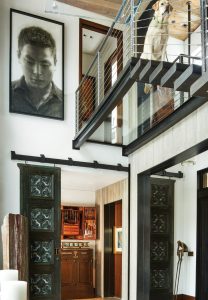 A pair of antique doors, sourced from a Midwestern bank, were mounted on a steel slider to provide privacy in the homeowners’ bedroom. A landing on the second floor, constructed of Starphire Glass, provides an ultra-clear view from above and below.

And, like Victorian-era adventurers and explorers, their interest in art collecting and design is fueled by an innate curiosity and love of adventure. “We hand-picked all the stone in this house,” explains Grinspoon. “We went to a quarry in Texas to pick out the white limestone on the walls in the kitchen. We actually picked out the vein we liked, and the company quarried it for us.” In addition, the men traveled to Italy to find unique stone slabs that are incorporated into vanities throughout the home. “A lot of this is just an excuse to go see how these things are made,” Foley adds.

Interior designer Tom Segal worked with Grinspoon and Foley on the first home they built together in Chicago. “You’ll find street art next to [high-value] antiques, curated and procured from the best dealers in the world in their house, but it’s likely you won’t know which is which because it all seems high quality and artistic,” Segal says. 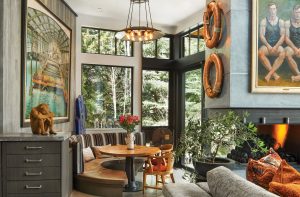 While Segal’s Chicago-based firm, Kaufman Segal Design, was brought in to select finishes and furnishings, their real job, he says, was to find a way to display the art, regardless of provenance or price, in an even manner. “By displaying it, Jeff and Jon are calling attention to it,” he says. “They want you to look at each piece in a new way, and in doing so, you’ll be inspired to wonder where it came from. There are multiple layers to the story of each piece’s creation, selection, movement, and presentation. That’s what makes Jeff and Jon so passionate about their art. Everything has a story, and it’s there for the telling.” 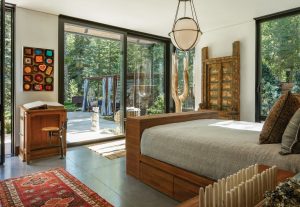 The homeowners’ bedroom features corner windows with direct access to the patio and spa beyond. With the push of a button, a flat-screen television rises out of an encasement hidden at the foot of the bed.

Together, Foley and Grinspoon can account for at least 740 pieces of inventoried art under their roof, ranging from taxidermied animal heads to a 1,000-pound petrified root ball, to an array of collections that include antique chocolate candy molds, a formidable display of Midwestern meat cleavers, and a set of century-old polished Czechoslovakian steel machine button stamps. A 2,000-pound boiler door that Foley found online was repurposed to cover a small bar that is set into the living room wall. “Everything in our collection we have found ourselves,” says Grinspoon. 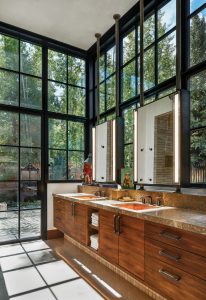 The bathroom suite features floor-to-ceiling windows that look to a private garden.

The story of Foley and Grinspoon’s home is as much about the architecture and design as it is about the power of memory and experience serving as a conduit for visual storytelling and informing living space. “We’re not just accumulating art for the sake of collecting,” says Foley. “The best and most important part about our collection is that Jeff remembers all the stories that come with each piece.”