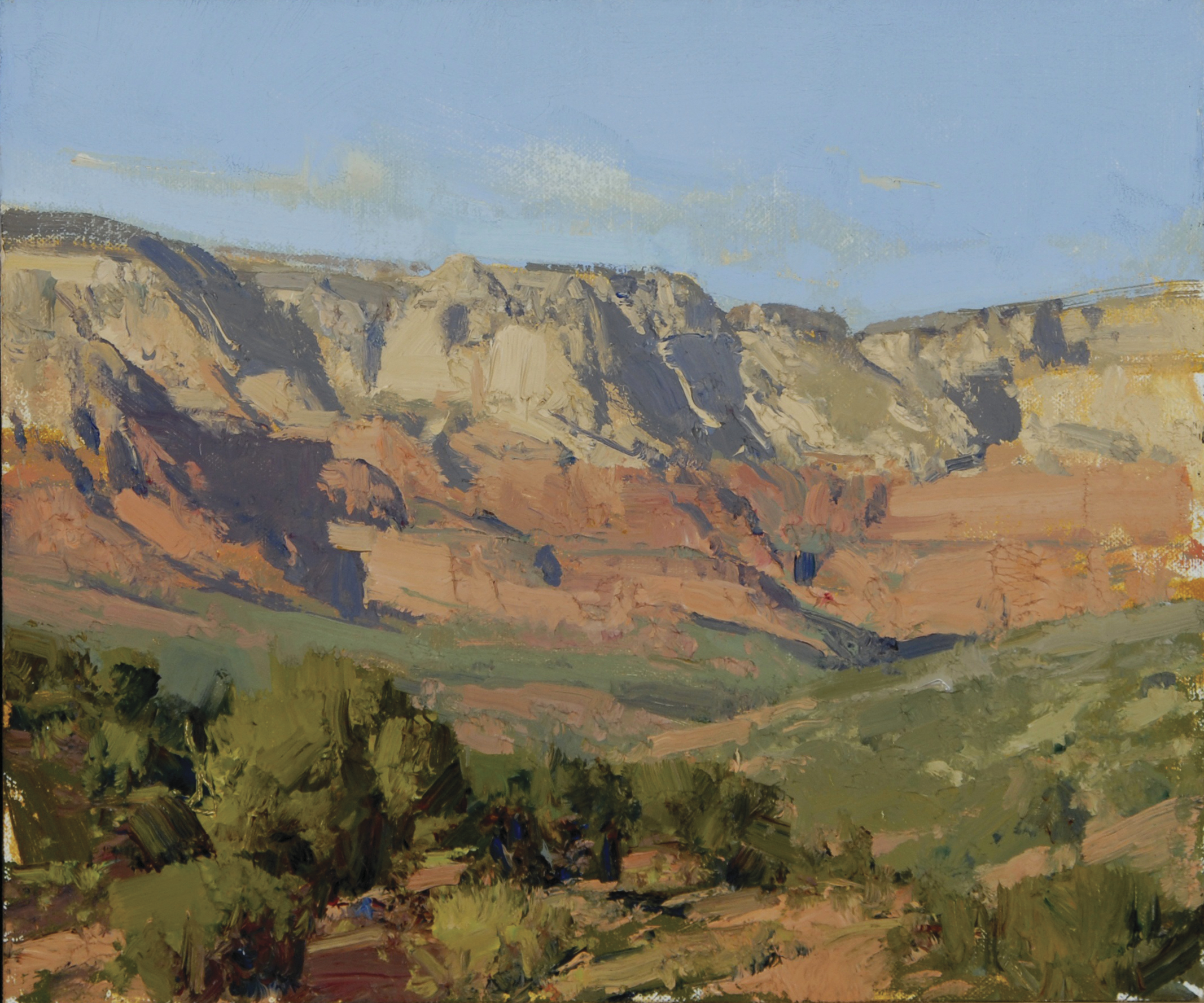 MY NECK CRANES UPWARD AT THE NIGHTTIME SKY; I’m staring at an overwhelming amalgam of stars better known as the Milky Way. As my eyes turn away, and my focus returns, I realize I’m back in the moment. Which isn’t necessarily such a bad thing — I’m Bill Anton’s guest at his extraordinary Prescott, Arizona, home at the base of Granite Mountain.

As a city slicker who writes about contemporary art, I am way out of my element. But as soon as I walk into Anton’s view-filled studio, I realize that his concerns as an artist are universal and supercede the way his work is typically categorized. His space contains a number of paintings in various states of completion. But there is one large vertical picture that stands out. Between Two Worlds depicts a seated cowboy, his majestic palomino nearby, caught up in a moment of reflection, as city lights flicker in the distance and a few scattered stars illuminate the slate-gray evening sky.

Night scenes are among the most challenging imagery an artist can paint; Frederic Remington was among the few who could pull it off. There is a very real risk of transforming a painting into a cliché by over-dramatization. Anton managed to avoid falling into that quicksand. He explained his approach to me, “Painters tend to get too colorful. You don’t want to exaggerate the color too much — what makes the picture effective is showing color restraint.”

In some ways, this painting that so captivates me is a metaphor for Bill Anton’s career. As someone who left Chicago in 1977 and took up permanent residence in Prescott, Arizona, Anton turned his back on urban life to experience modern-day ranching, much like the figure in his painting. Part of Anton’s authenticity as an artist is that he lives the life he paints. Along with Peggy, his wife of 29 years, and their two children, AnnieLaurie, 12, and Will, 11, Anton’s lifestyle revolves around the rhythms of the seasons, much like the cowboys of yore.

Anton’s work is a personal crusade to get the viewer to slow down and enjoy the “home on the range” sublime beauty of the Southwest. His appreciation of nature and his powers of observation run deep. I found out how deep, when I acquired a painting of his. After living with a small landscape study, I wanted more and wound up commissioning a painting. All I had asked was that Bill incorporate the red rocks we looked out upon, when he and his wife joined me last year for dinner at Asylum, located in the old copper mining town of Jerome, Arizona. Upon receiving and hanging Morning at Sycamore Canyon, I marveled at how the work changed along with the day’s shifting light; it felt alive.

Without knowing the work’s title, I gazed at the two riders on horseback, against the backdrop of a red mesa, reconnoitering the land during what appeared to be the oncoming sunset. I called Bill and said, “I like the way the picture captures the fleeting twilight.” He replied, “No, the scene actually takes place at dawn.” Surprised, I asked, “How can you tell the difference?” Anton’s answer told me all I needed to know about his connection to the land. “Colors are brighter and richer early in the day because the morning dew enhances them. Also, if you look at the horses, you’ll notice they’re still fresh.”

Morning at Sycamore Canyon slipped seamlessly into a dialog with the works of contemporary art that circle my walls. Anton has brilliantly managed to stay true to his work’s Western heritage while crossing over into a contemporary artist’s sensibility. Realists as diverse as Robert Bechtle, David Hockney and Wayne Thiebaud all share Anton’s desire to reveal what is often overlooked and taken for granted. Going back a generation, his paintings’ narrative qualities call to mind the modern master, Edward Hopper. But as Anton will tell you, it’s really all about creating a feeling. His imagery becomes a state of mind rather than an actual place.

Among Anton’s influences, he cites the work of James Reynolds, Michael Lynch and Ned Jacob — artists who generate an atmosphere that affects a viewer’s mood. Whatever you psychologically bring to their pictures is thrown right back at you. Anton’s paintings have that same mirror effect — but seem to go a bit further. They reflect your emotional state; but in the next instant, they can change it.

During my visit to Anton’s studio, he gave me a demonstration on how he constructs a painting. On a small canvasboard, that measured perhaps 10 by 12 inches, he began to sketch out a mesa-strewn Arizona countryside. It came so naturally to him that I felt as if I were watching a finely tuned athlete who relied on muscle memory, having put in many hard years of training to arrive at that point of self-confidence. Anton can’t guarantee a masterpiece each time. But when he touches his brush to canvas, there is a strong possibility that one will emerge. His batting average is high — the Ty Cobb of Western artists.

In the circle of Western art, Anton has received numerous awards throughout his career. Most recently, showcasing the night scenes that he so deftly renders, his work was recognized with two prestigious awards at the Autry Center’s Masters of the American West exhibit: The Spirit Of The West Award — for the most outstanding work in cowboy subject matter — honored his painting, Under a Cowboy Moon; and the Gene Autry Memorial Award honored the show’s best presentation of three or more works.

Back in his studio, Anton continued to block out elements of the rugged landscape. Then he filled in the details, controlling the temperature of the color, while bringing the red-rock formation into high relief. Hovering clouds in the distance revealed the approaching storm. Green piñon pines in the foreground provided a vantage point that would allow the viewer to “keep dry.” A few more flicks of the brush and the painting seemed to snap into place. My first thoughts were to find a spot for it in my collection.

Then, without warning, Anton wiped it away with one quick swipe of the rag. He had intended for it to be instructive — not something destined for the marketplace. My art dealer instincts kicked in and I shook my head at the lost opportunity. But no matter. There will be more paintings. Bill Anton’s work is going to be around for a long time to be savored by future generations, in much the same way he draws sustenance from the Frank Tenney Johnson that graces his living room wall. 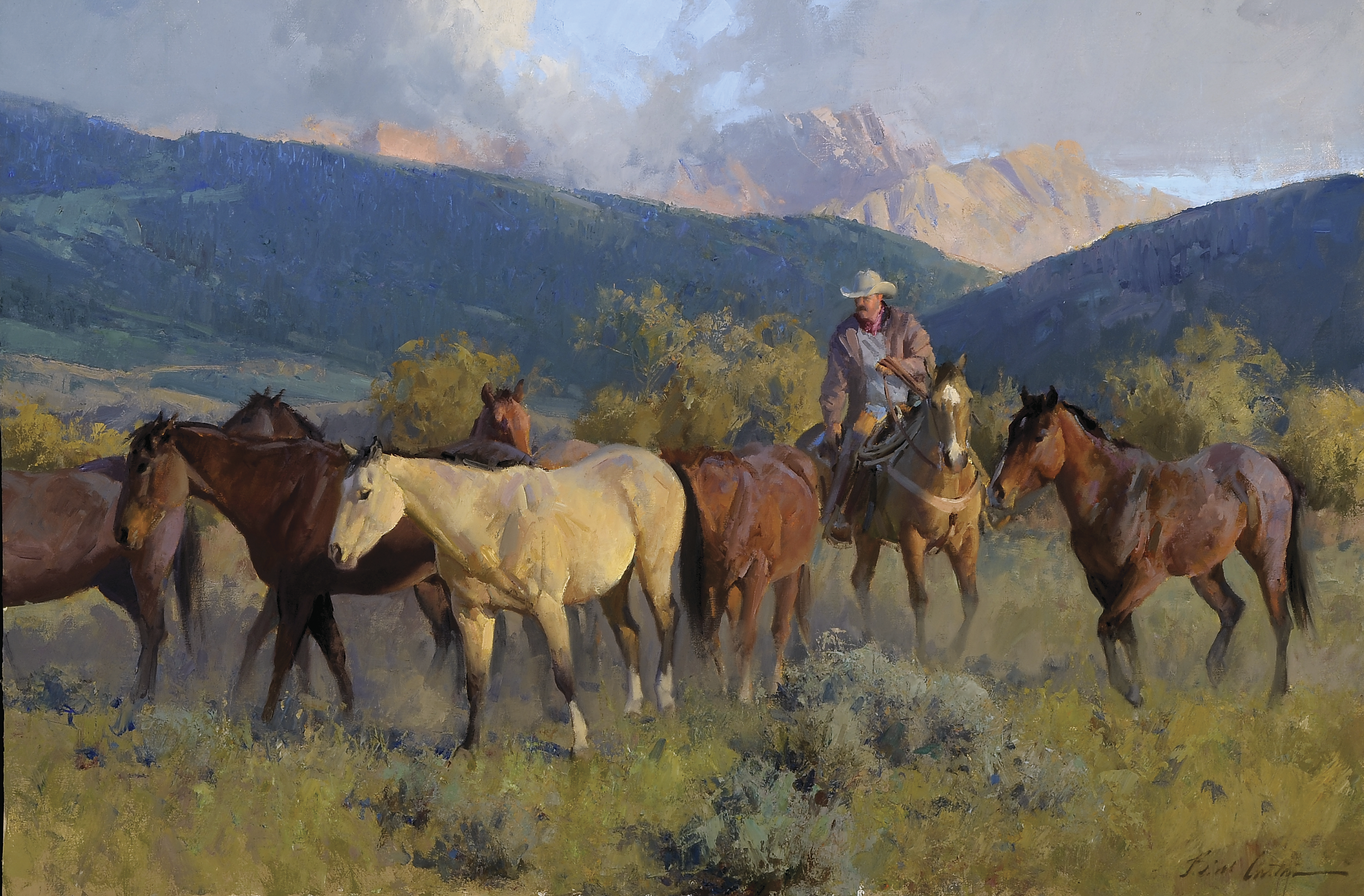 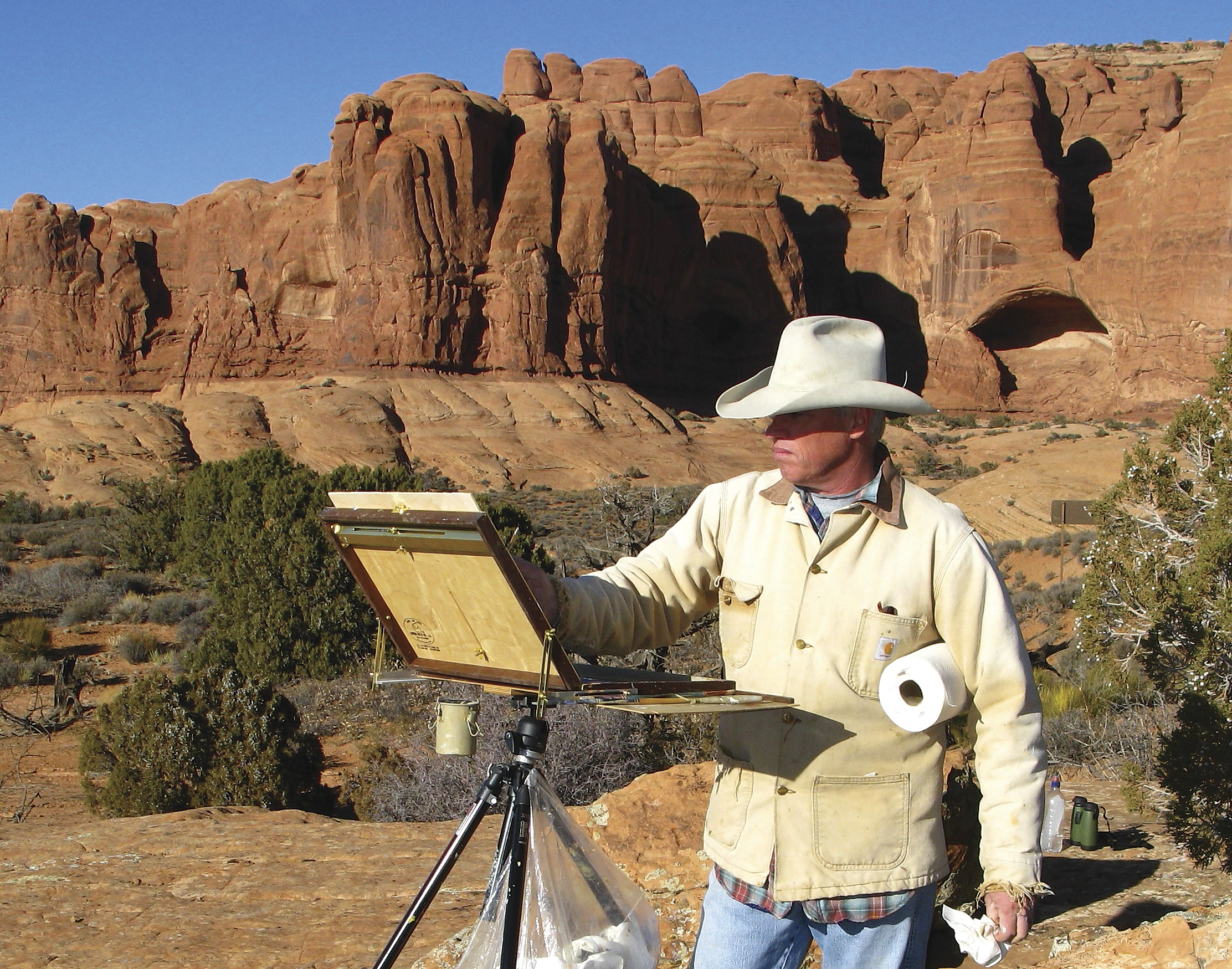 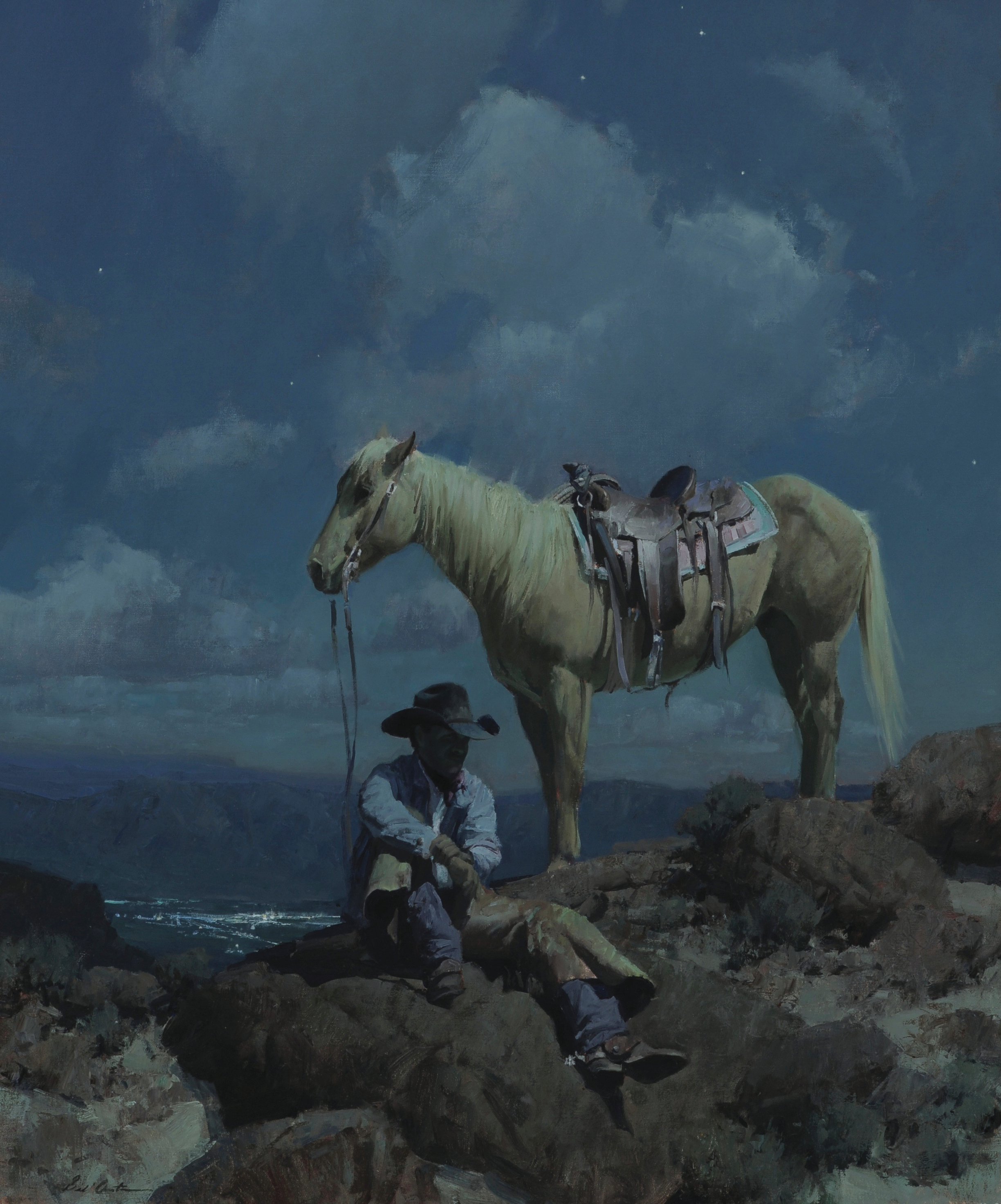 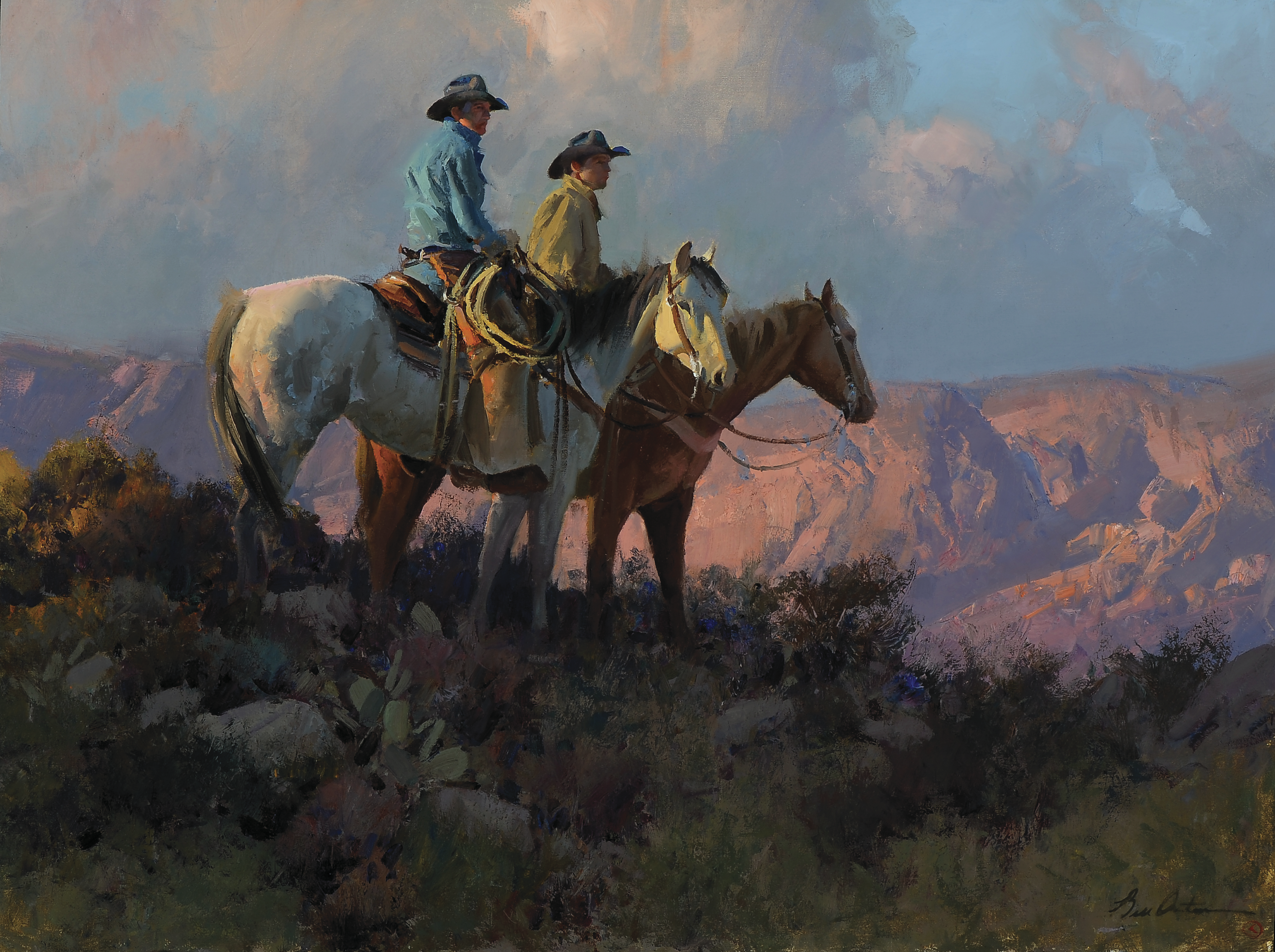