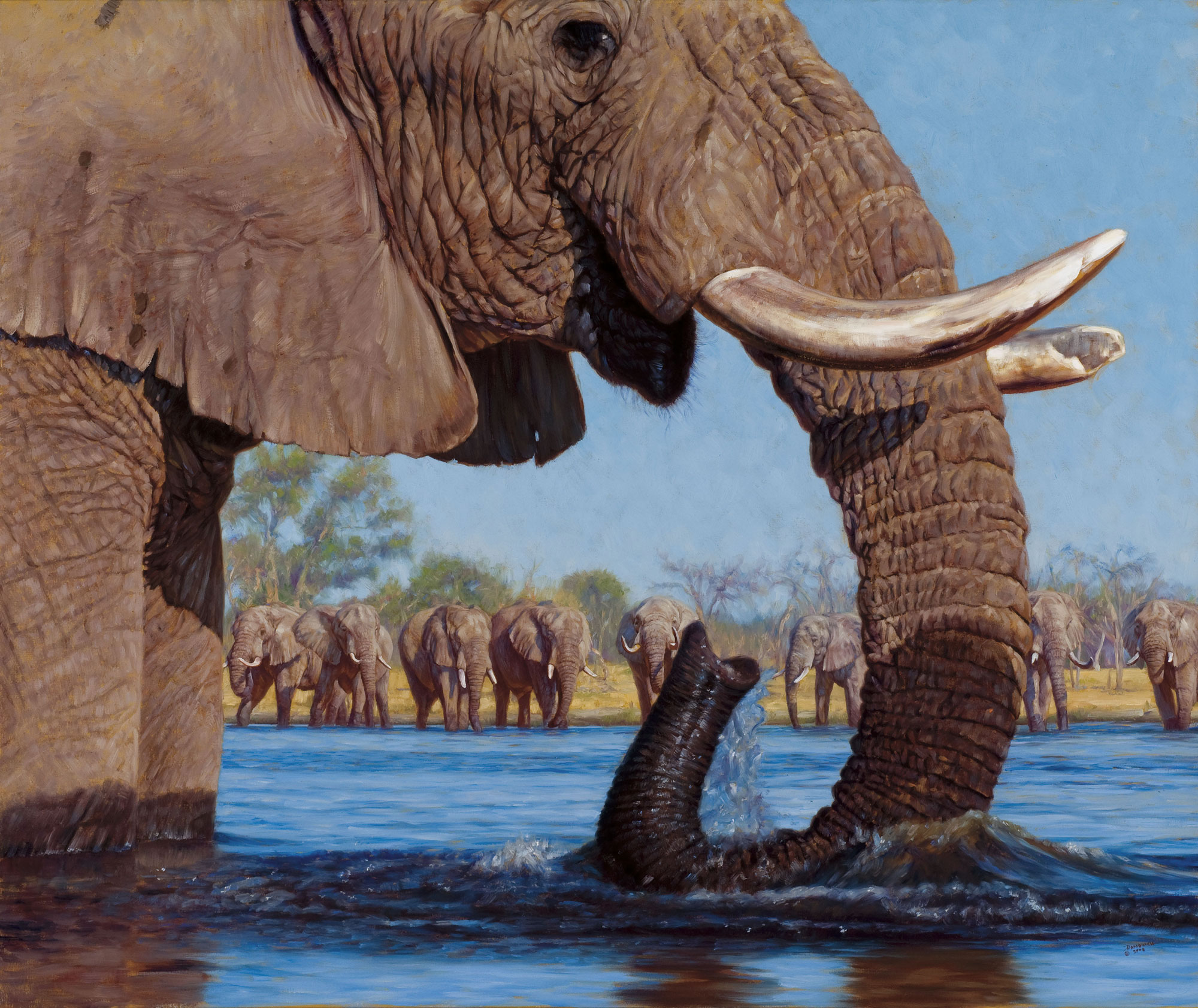 EVERY AFTERNOON FOR 10 DAYS, John Banovich went to the banks of Botswana’s Khwai River, where families of elephants gathered to eat and drink and bathe. With 25 trips to Africa under his belt, he’d seen a lot of elephants but he wanted to see more, to learn more. Like the time he spotted a baby that had lost its trunk, perhaps to a lion attack, and he saw its mother break off branches to feed the infant.

“I’d never seen animals care for a handicapped individual before,” Banovich said. Then, on the eleventh day, he decided to join a group of 12 bulls in the river, slipping into the chest-deep water, among the hippos and crocodiles, trying not to think about mysterious bugs and parasites.

The hippos rose, gave him the eyeball and moved on. The crocodiles stayed hidden, which wasn’t exactly a comfort, since visibility in the water was just a few feet. But the elephants paid no heed and went about their business, which included ignoring Banovich.

“As long as I stayed low in the water, I looked like a white hippo,” he recalled. And that was just fine with him, because getting close was the whole idea. The giant bulls allowed him to approach within eight feet, something you could never do on dry land, not without provoking a charge, a flight or some type of reaction.

“In the water, they were completely relaxed,” he said, because they have no water-dwelling predators. And because he was so close — there, among them — they gave him something: a close-up glimpse of how elephants see the world.

“My perspective of elephants has changed forever,” said Banovich. He knows them better now. He has a new insight into “the character of the species, to maybe see through its point of view.”

And his perspective is important. He took his fresh outlook home and set to work, using paint and canvas to tell stories of one of the world’s most magnificent creatures. He’s creating a series of elephant paintings, done in his characteristic realism but applying the new lessons he learned by swimming with giants.

Jumping in a river with wild African elephants would pop open anybody’s mind, though most people would pass on the opportunity. For Banovich, it was part of his research, which calls on him to get to know his subjects in ways most people only dream about.

“If you understand the intricacies of the habitat, you can capture it in a painting and hopefully inspire someone to learn more,” he said.

It’s how Banovich works: using his art to open doors and minds, and to raise money for conservation of some of the world’s most charismatic and often controversial species, from Siberian tigers to North American grizzly bears to African elephants and lions.

It’s not the kind of role you’d expect for a former bodybuilder who grew up in scrappy, hard-knuckled Butte, Montana, a place that takes a perverse sort of pride in being America’s biggest superfund site. But he’s making it happen. Through donations of his artwork, he’s raised $1.5 million for conservation groups and he introduces needy projects to wealthy donors, something he can do because his role as an internationally acclaimed artist grants him mobility and access.

“Photographs and art carry a powerful message,” said Dr. Maurice Hornocker, founder of the Hornocker Wildlife Institute. “And I regard him as one of the top wildlife artists, not just contemporary, but of all time. I think he’ll go down in history that way. Even if you aren’t particularly interested in wildlife, you have to admire his work. So it brings interest. Art promotes wildlife conservation.”

Hornocker, who has worked on wildlife conservation issues since the 1950s, met Banovich in the 1990s when the artist contacted the biologist about a Siberian Tiger project in the Russian Far East.

Both men believe in the North American model of wildlife conservation, which uses hunting license money and taxes on equipment to hire game wardens, conserve habitat and pay biologists to figure out what game animals need. In the meantime, countless other species benefit, from dung beetles to songbirds.

Siberian tigers are one of the rarest animals in the world, with just a few hundred still alive, and Banovich and Hornocker have helped bring hunters from abroad to Siberia, where they pay big money to hunt wild boar, elk and a number of other species, but not tigers. The money they spend helps locals see value in the animals the tigers eat, which helps them see the value in protecting habitat and oppose poaching, which helps the tigers.

Banovich has also donated original art for Hornocker’s group to sell — some of his pieces fetch tens of thousands of dollars — and he has motivated groups and individuals to lobby the Russian government to preserve tiger habitat.

“It’s just endless what the guy has done,” Hornocker said.

Not everybody can make the mental leap connecting hunting and wildlife conservation. Banovich understands this, but believes that “tourist hunting” is the one method proven to create monetary value for wildlife, particularly the controversial and sometimes dangerous varieties.

The model works particularly well outside of protected areas, like national parks or refuges. He points to the thriving wildlife of North America and Tanzania as an example.

“If you can legally shoot it, it’s probably doing fine,” he said. “In this world of 7 billion people, wildlife must pay in order to stay. (The concept) is controversial in many places, but I’m trying to bring the truth. I’m always looking for ways to make wildlife conservation the most valuable way to manage a landscape.”

Transplanting these concepts to places like Africa and Siberia is a big and complicated idea. But Banovich likes to think big. Big animals and complicated ecosystems. Big paintings with incredible detail. Some seem photo-realistic at first glance, but take a longer look and you see there’s an extra depth. It’s not a photograph. It’s not just a likeness. It’s something more.

His largest piece so far is a life-sized rendition of a charging bull elephant, entitled Once Upon A Time. The canvas measures 10 feet by 10 feet. Framed, it measures 13 feet by 13 feet and it took three days just to hang it in the home of Richard Childress, a collector of Banovich’s work and the owner of a championship NASCAR racing team, as well as a couple Montana ranches.

Childress, an active hunter and conservationist, said he’s been charged by elephants in the past. “The painting just reminds me so much of the real thing,” he said. It’s the details that count: the wrinkles on the tusk and brow, the clouds of dust rising from the massive feet, the birds scampering to avoid the charge. “That’s like the real thing that you would see in Africa,” he continued.

Banovich, 45 and a full-time artist since the early 1990s, works with oil paints on Belgian linen, employing an old masters’ technique of brushing in a drawing with a sienna wash to instill a warm glow, then overpainting it with oil.

The massive elephant painting was a challenge, both emotionally and physically. “I believe an artist has only a limited number of large canvases in him,” he said. Just the hours of standing with one arm raised can be brutal, even for a former competitive bodybuilder.

While he might limit his life-sized portrayals of elephants, he’s not slowing down on his work schedule. He spends about three months a year traveling to places as far flung as Africa, Pakistan, the Canadian Arctic and Siberia, where he often joins up with biologists conducting hands-on field research. During the rest of the year, he’s laboring hard in his Paradise Valley, Montana, studio, nestled between the Absaroka and Gallatin mountain ranges and overlooking the Yellowstone River. There, he creates the work shown today in museums, galleries and private collections around the world. In whatever time is left over, he’s producing a book of his images entitled Beast, scheduled to be published in October.

He also oversees the Banovich Wildscapes Foundation and the PRIDE initiative, organizations which donated more than $200,000 to conservation causes in 2008.

During his travels, he soaks up the knowledge that makes his paintings sing: the way Cape buffalo gather to protect themselves, the translucent skin of a baobab tree, the color of a lion’s eye, the way to behave in a river full of crocodiles and bull elephants.

And he also learns more about the dangers facing so many species around the world. So he tries to help. He says he doesn’t have a choice. 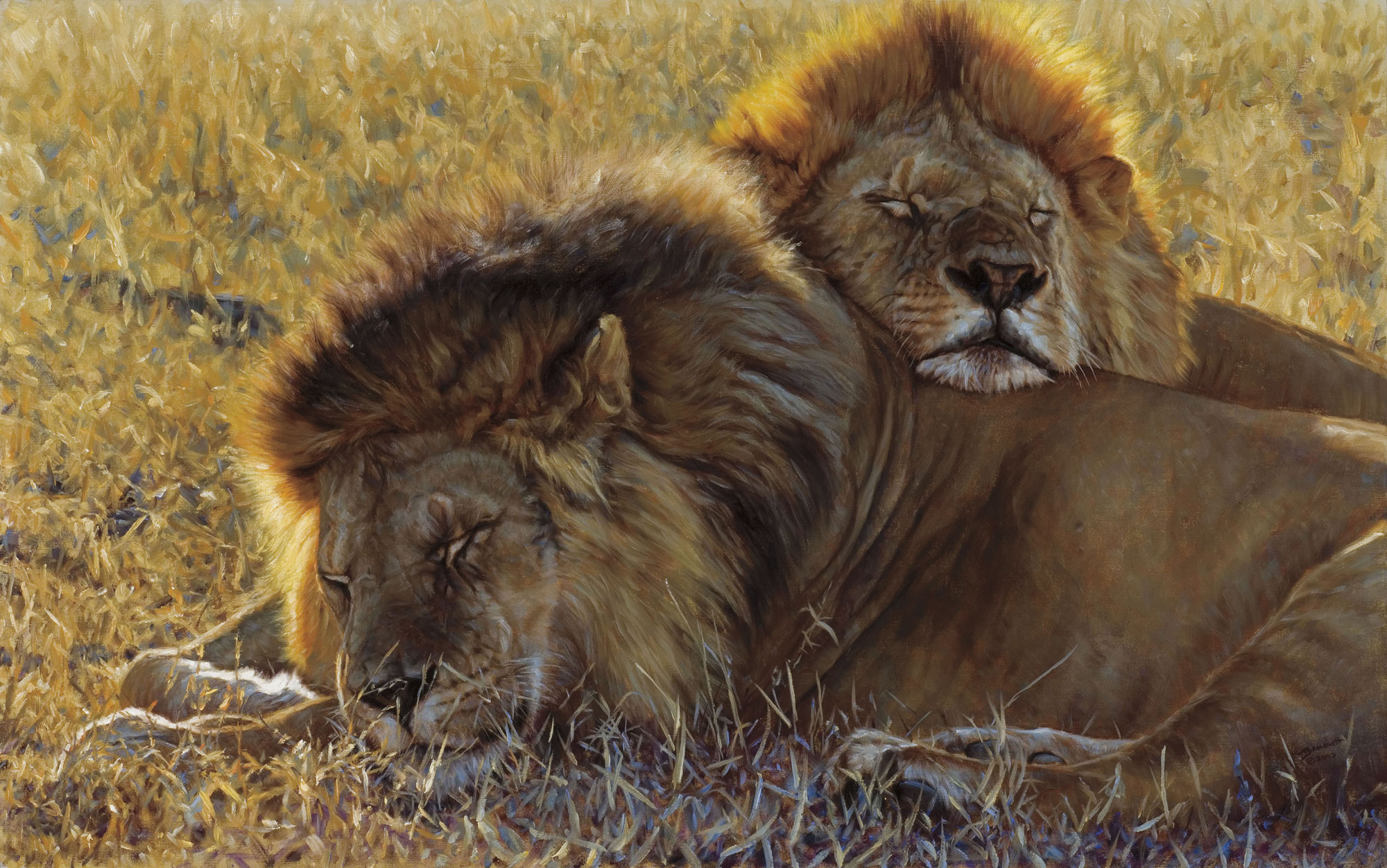 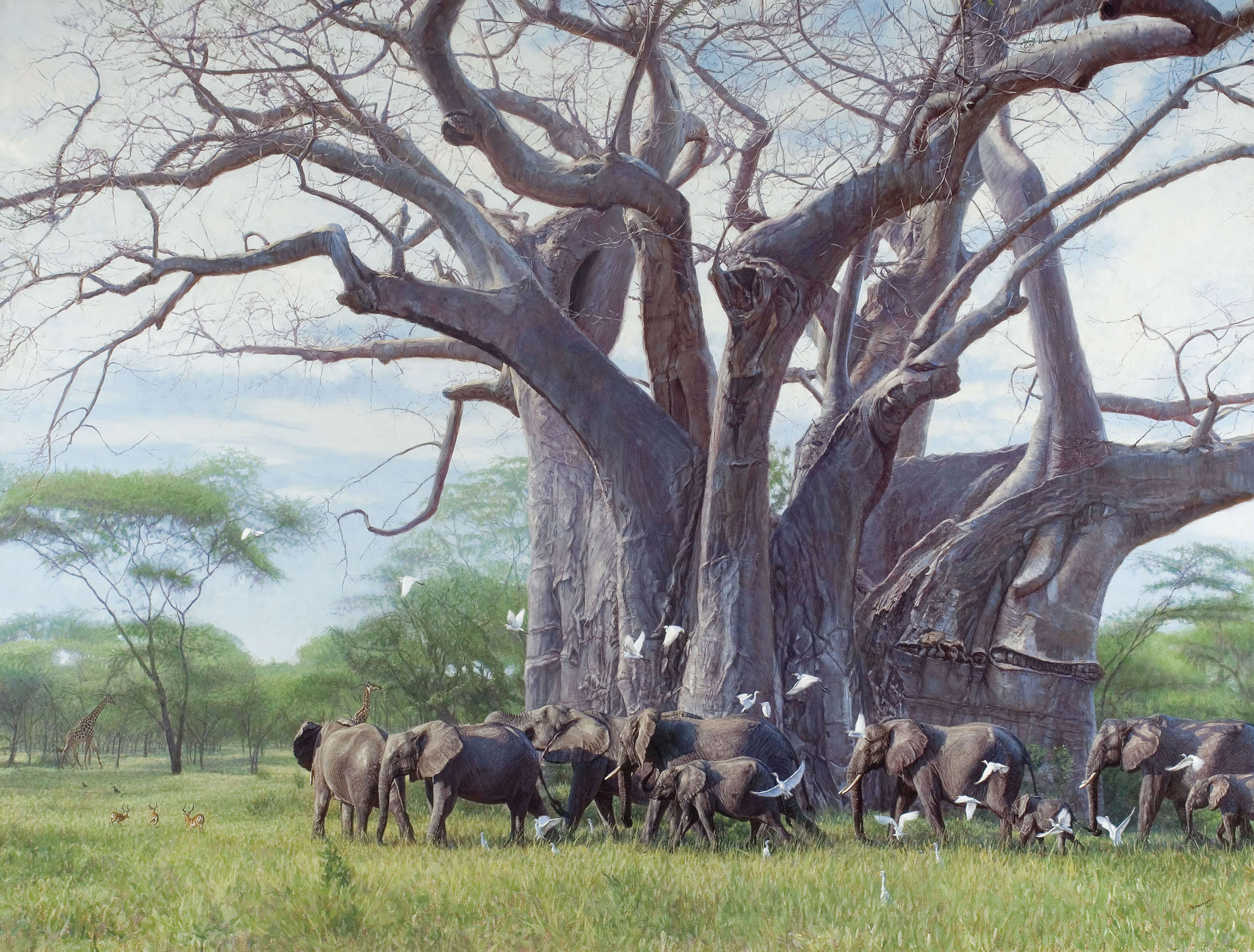