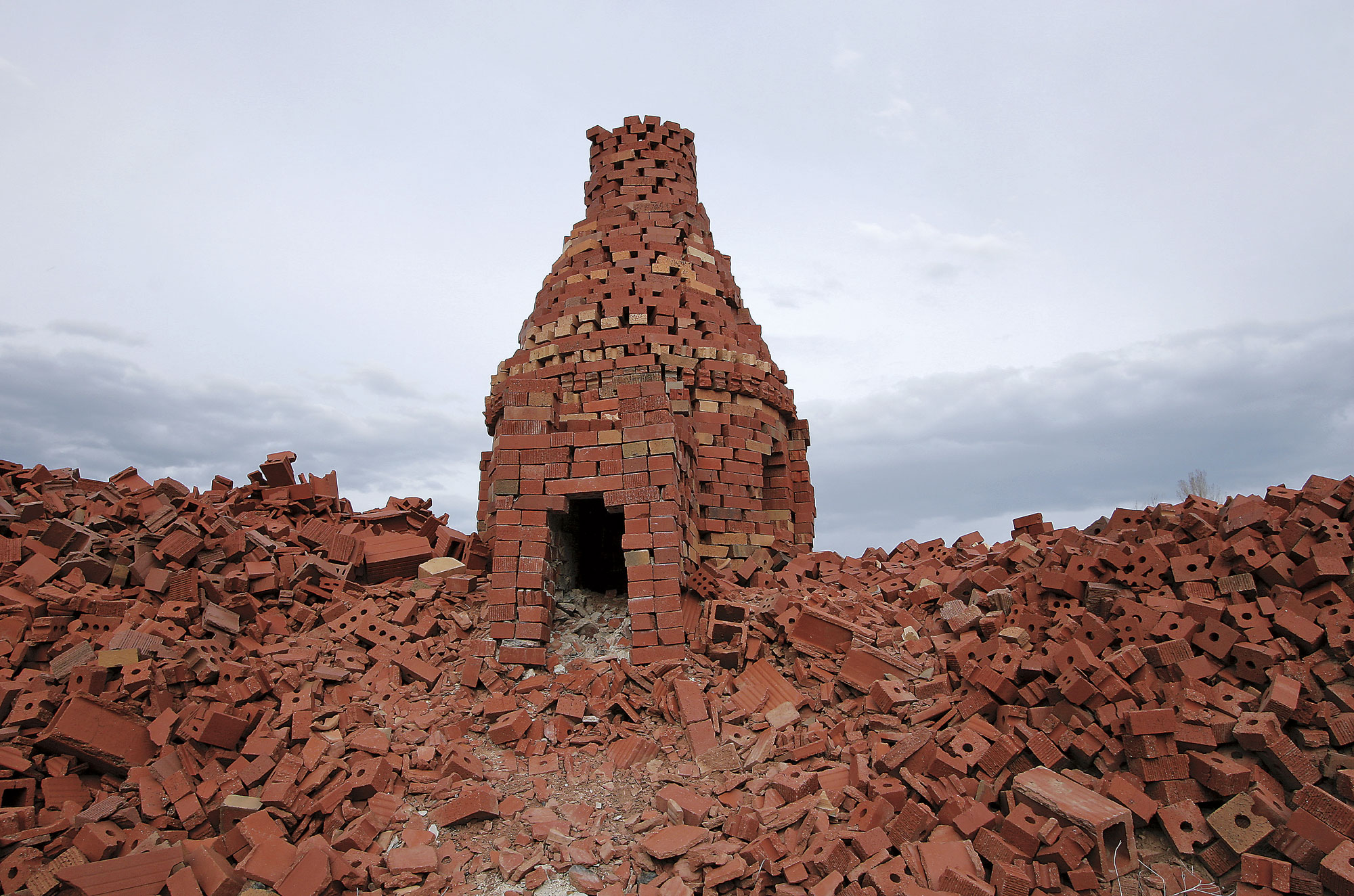 A site-specific sculpture is made of bricks from the former historic brickyard.

BUILT ON THE BONES OF A 100-YEAR-OLD BRICK FACTORY, the Archie Bray Foundation is an international magnet — innovatively fecund, proliferate and as humble as a monastery.

The parking area of the Bray is muddy. The buildings, while neat, seem almost randomly located. But then off to the left, shards of color, like springtime sprouts, peek from the dull earth. In the distance arcs a tiled threshold to eternity, in the other direction sits a round and roofless shrine. Clearly, this place is like nowhere else.

Richard Notkin, widely recognized ceramic artist and recently elected Fellow of the American Craft Council, meets us at the Foundation office. In 1981, Notkin did his residency at the Bray, when ceramicist Kurt Weiser was the director.

“In my mind it was Oz,” Notkin says, his voice smooth as glaze. “Back then it was just weeds everywhere and the buildings were really dilapidated. I thought Kurt was joking, that this was the Bray. It looked like a ghost town. But over the next few days I fell in love with the place.”

It’s easy to see how that happens. The Bray, located just outside of Helena, Montana, is both deep-seated in historical significance and the wellspring of important, up-and-coming artists. It has the uncanny ability to attract the highest caliber of artists. The first residency program in the United States devoted solely to ceramics, the Bray keeps up a stellar reputation by offering creative autonomy and artistic camaraderie.

We are joined by Steve Young Lee, the Bray’s current director and, as in accordance with tradition, also a ceramic artist of note. In the Sales Gallery, we’re surrounded by vessels and plates from the permanent collection, where the voices of world-renowned ceramicists such as Rudy Autio, Peter Voulkos and Bernard Leach seem to whisper at us from the corners.

“There’s something about this place … it’s different from any other,” Lee says. “The time and freedom, the place itself and the prestige all coalesce in an unusual way. The foundation is so supportive and the studio spaces are free. You just can’t get that anywhere else — especially for someone just out of school — it’s ideal.”

Ceramic art is tied to millennia of tradition, honoring both the vessel and the primal forces of fire as a creator. At the Bray those foundations are investigated, questioned, venerated and stretched.

“It’s just a very fertile place to work,” Notkin says. “I’ve seen ceramic art programs all over the world and there’s nothing like it.”

Lee and Notkin start naming programs and they realize most of the ceramic residencies and programs in other countries were started by former Bray residents.

This year five out of six “new emerging artists” at the National Council of Education for the Ceramic Arts Conference were past residents of the Bray — a staggering fact that often pulls collectors here.

“I’ve heard people refer to this place as their ‘hunting ground’ for art,” Lee says, opening a door and stepping into the Bray Gallery.

Before we leave to wander over the sprawling 26 acres with more than a dozen buildings, 15 kilns and several sudden outcroppings of site-specific sculptures, we visit the men’s room — not because of the call of nature, but because there’s a Peter Voulkos plate hanging right over the john. In a lot of ways it’s symbolic of the Bray itself: nonchalant greatness; an implied hands-on closeness to the past; and a feeling that nothing and everything is sacred.

“For me, being at the Bray allowed me to try a lot of new things. I tried stuff I wouldn’t have in my own studio and I picked up some techniques from people like Kurt [Weiser],” Notkin says as we make our way to the newly finished David and Ann Shaner Resident Artist Studio Complex, which won the 2007 Brick Industry Association Best of Class for its Brick in Architecture Award. The studio houses a dozen semi-open and private studio spaces for the residents.

“We spent six to eight years dreaming of this building,” Notkin says, walking down the long, wide corridor. He was on the facilities committee at the time. “The big controversy was whether the studios should be open or private. The older people knew private studios were more productive but the younger people wanted a more communal setting.”

“And I discovered that we could have both private and open.”

We continue to peer behind doors and through glass windows until we get to Lee’s area. He explains his large yet delicate porcelain vessels with complicated lids.

“I wanted to use the traditional shape and style of the ‘spirit jar,’ which were urns, the metaphysical place for a person after death,” Lee says, his long fingers play with the small figures around the top.

Notkin bends to examine them more closely and nods with deep interest.

Once outside, the expansiveness of the Bray feels endless. Behind the buildings, deposits of sacrificial offerings, broken, not-quite-perfect pieces that somewhere in the artists’ eye did not accomplish its intent, lay outside in the elements, like alms on the altar. As we pass by one of many of these “burial” mounds Notkin casually points out an Akio Takamori piece that warped in the kiln. He and Lee begin to name some of the other ceramic pieces half buried in the heap.

About 100 years ago the Bray was a brickyard. The beehive kilns, large rounded pyramids, add an echo of structure, another layer of substantive history. We visit the interior of a beehive kiln and it feels like a sanctuary, the single hole in the dome allows a solitary ray of light. Serene. Inspired. Holy.

Stepping across a field, just across a small incline, sits an amazing sculpture by former resident Fred Spaulding, made from found Bray bricks with silk-screened images from old advertisements and dyed an unnatural blue, bound and banded like cargo going nowhere. Garden plots are filled, not with vegetation, but with art, along the edges of buildings, in places where normally flowers might be planted — cups and urns, teapots and plates, painted and glazed, chipped and bent — art flows. It is as if the walls couldn’t hold it all and so it has bubbled up from below.

We’re back to the entrance where we’re greeted by a deep, rustic red structure in the distance. Robert Harrison’s Potters Shrine, is an incredible roofless construction resembling a castle turret, the arches filled with pieces donated by residents over the years, including a bust of Archie Bray by Rudy Autio.

“If something went wrong, it went in here,” Notkin says, pointing to a few of his own bas-relief tiles hung on the inside wall, he remembers the tiny flaws and runs his hand over the pieces.

And that’s part of the mystique of the Bray. Every past resident has left his or her mark in some way, daring the next resident to take it, transform it and pass it forward. 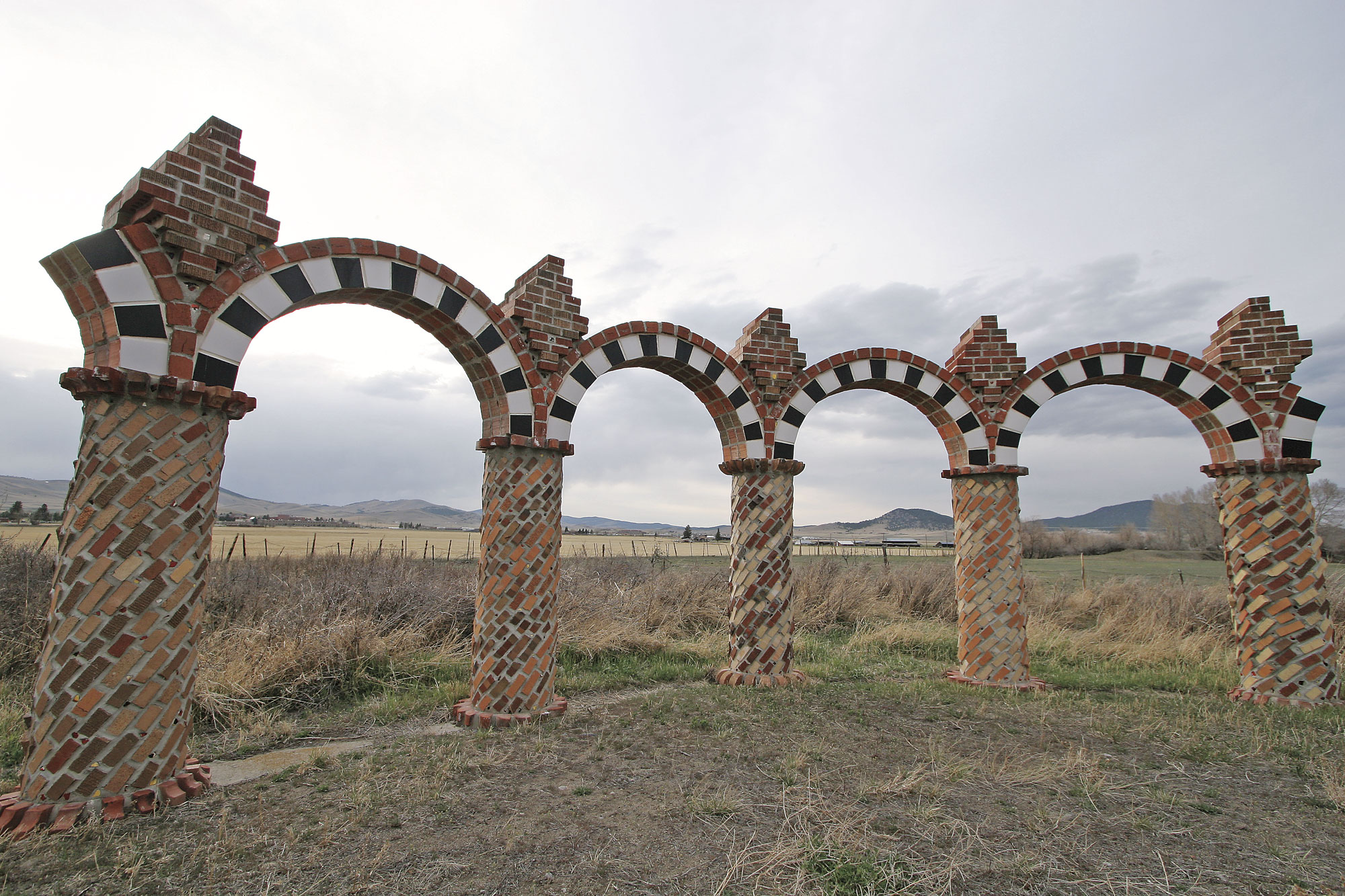 The Archie Bray Foundation, home to some of the best ceramic artists in the world, sits in a wild field, sprouting from the land like native grasses. The grounds contain hundreds of ceramic artifacts and site-specific sculptures created by former resident artists. 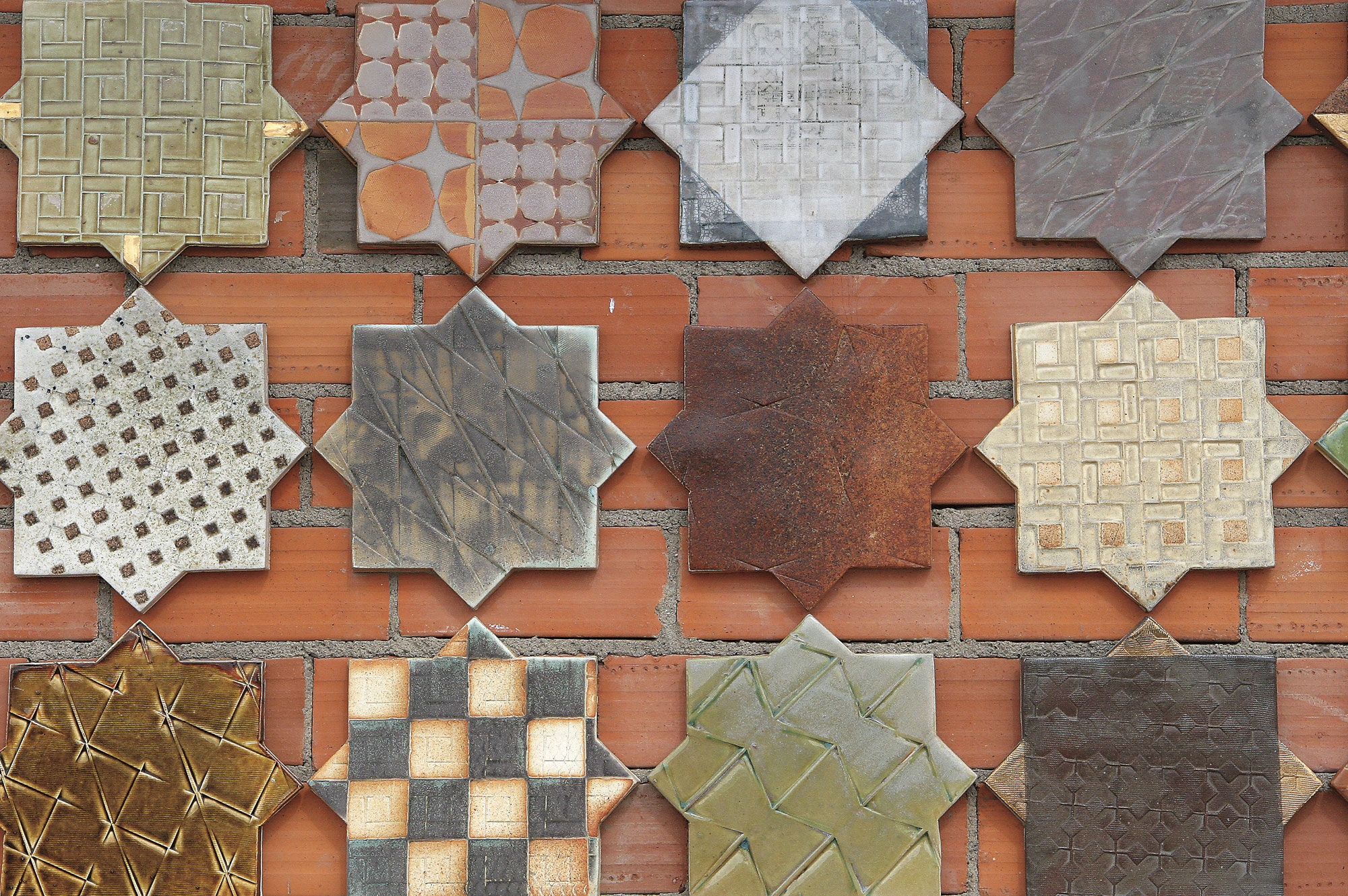 An array of experimental tiles decorates the artist studio complex. 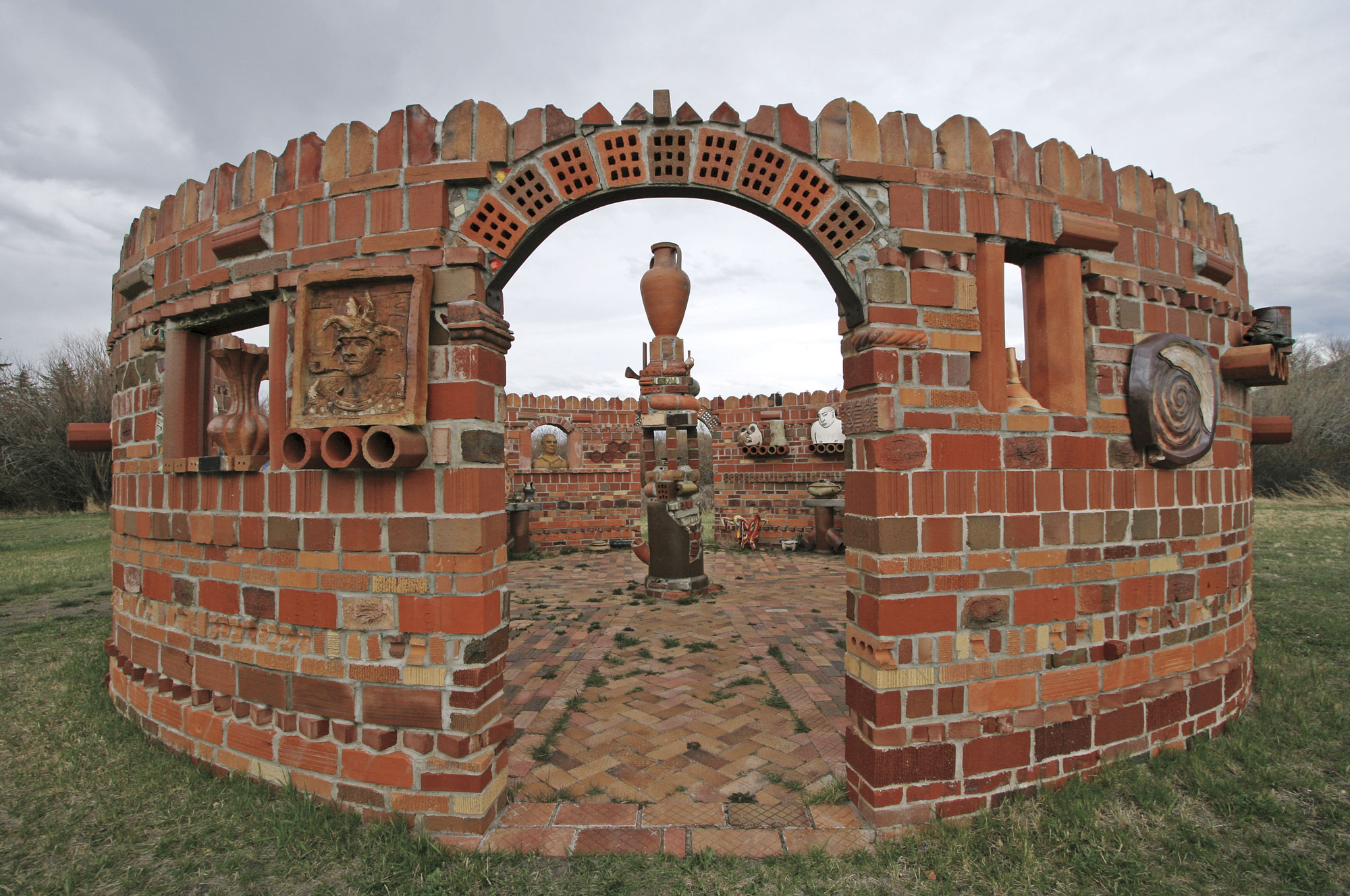 Robert Harrison’s Potters Shrine is seen in this fisheye view. 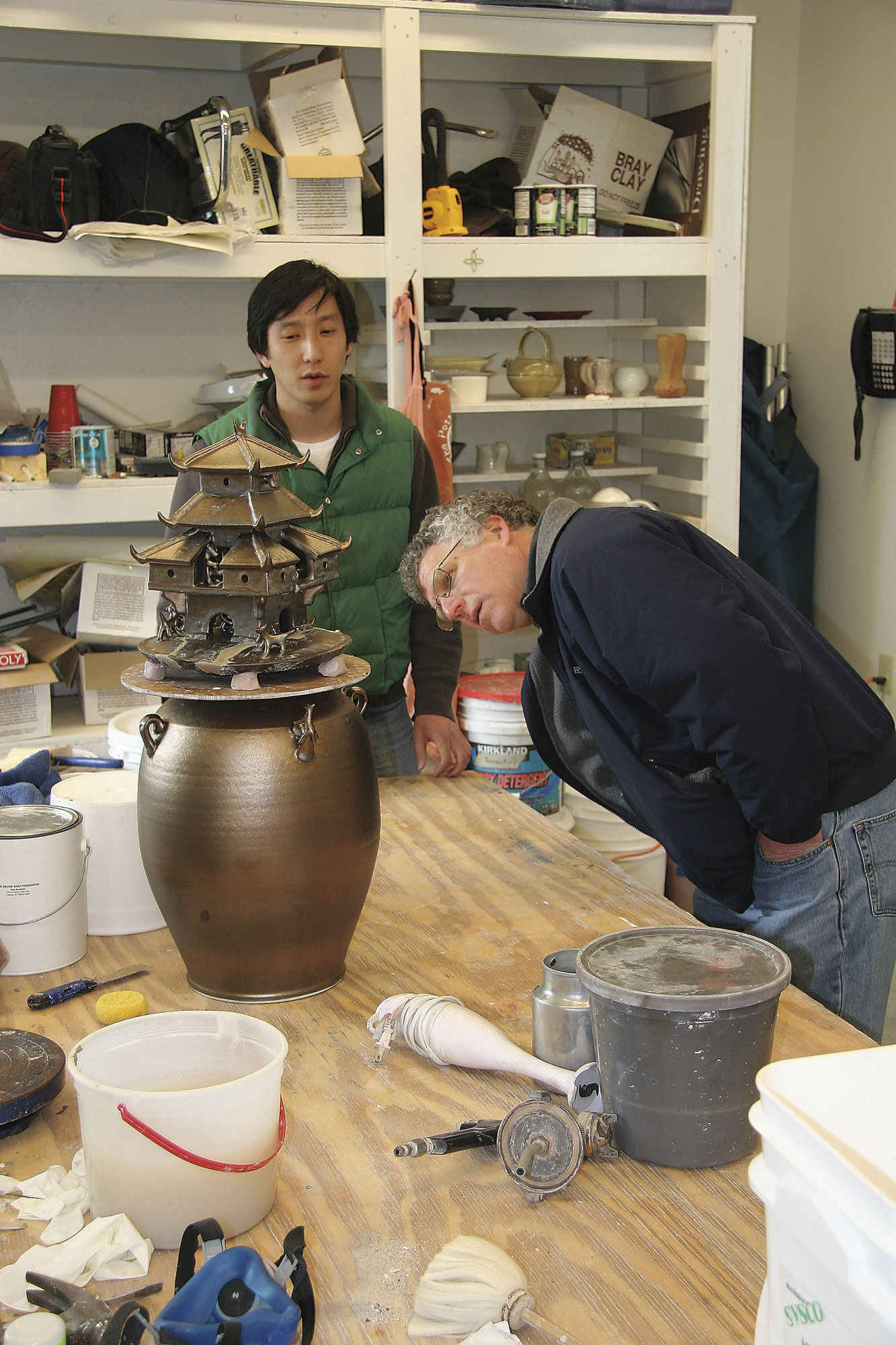 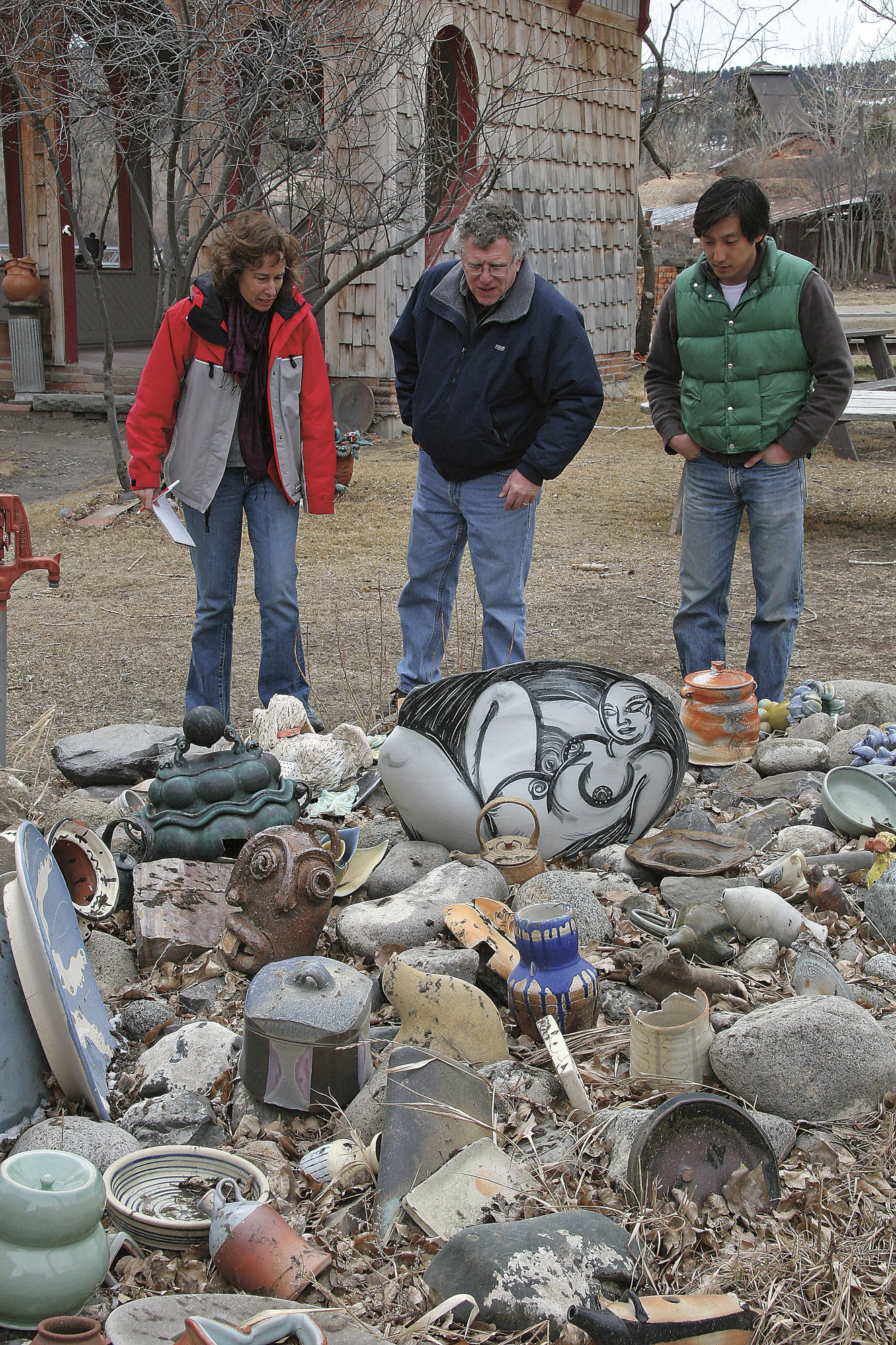 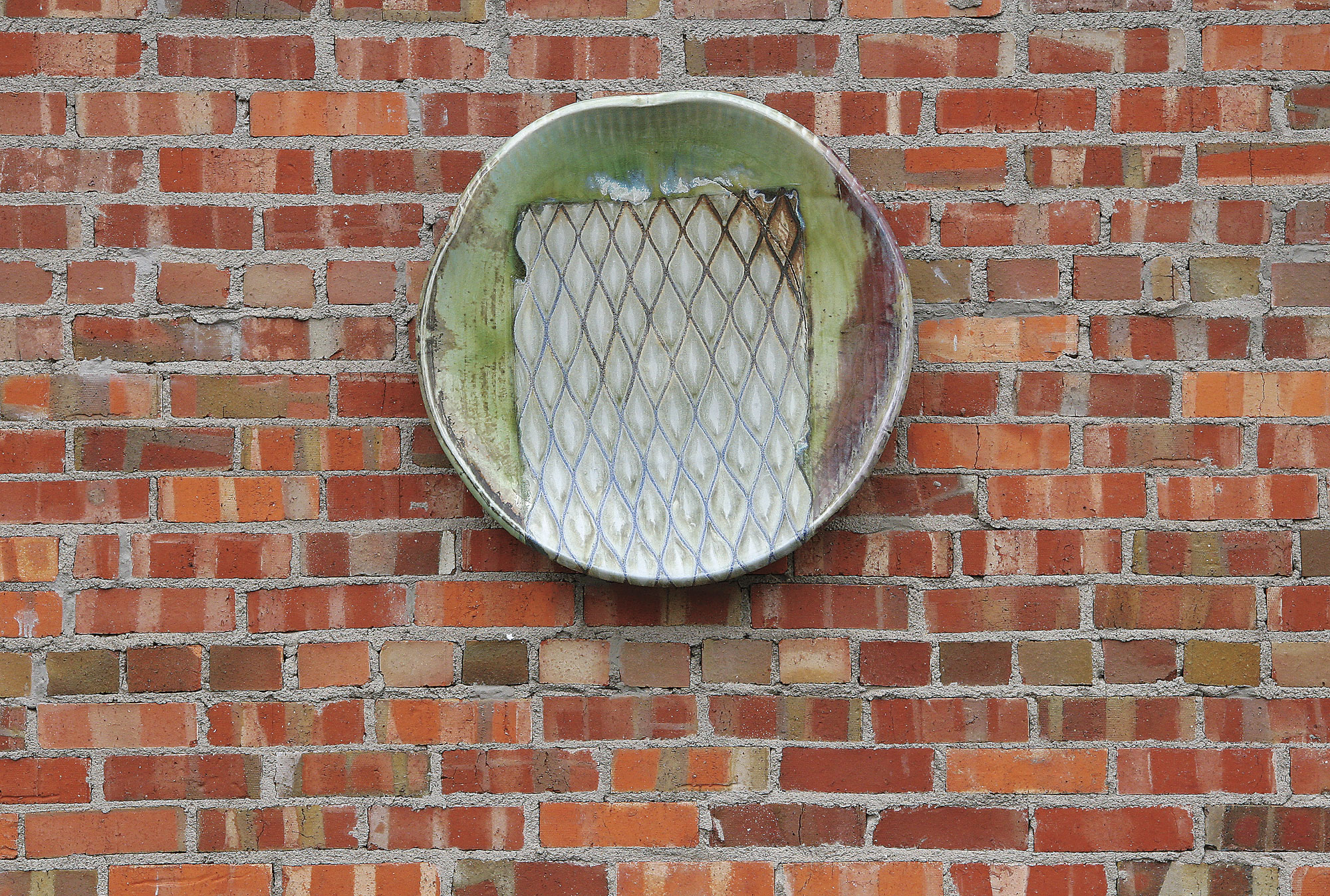 A plate donated by a former Bray resident hangs on a brick wall outside one of the galleries. 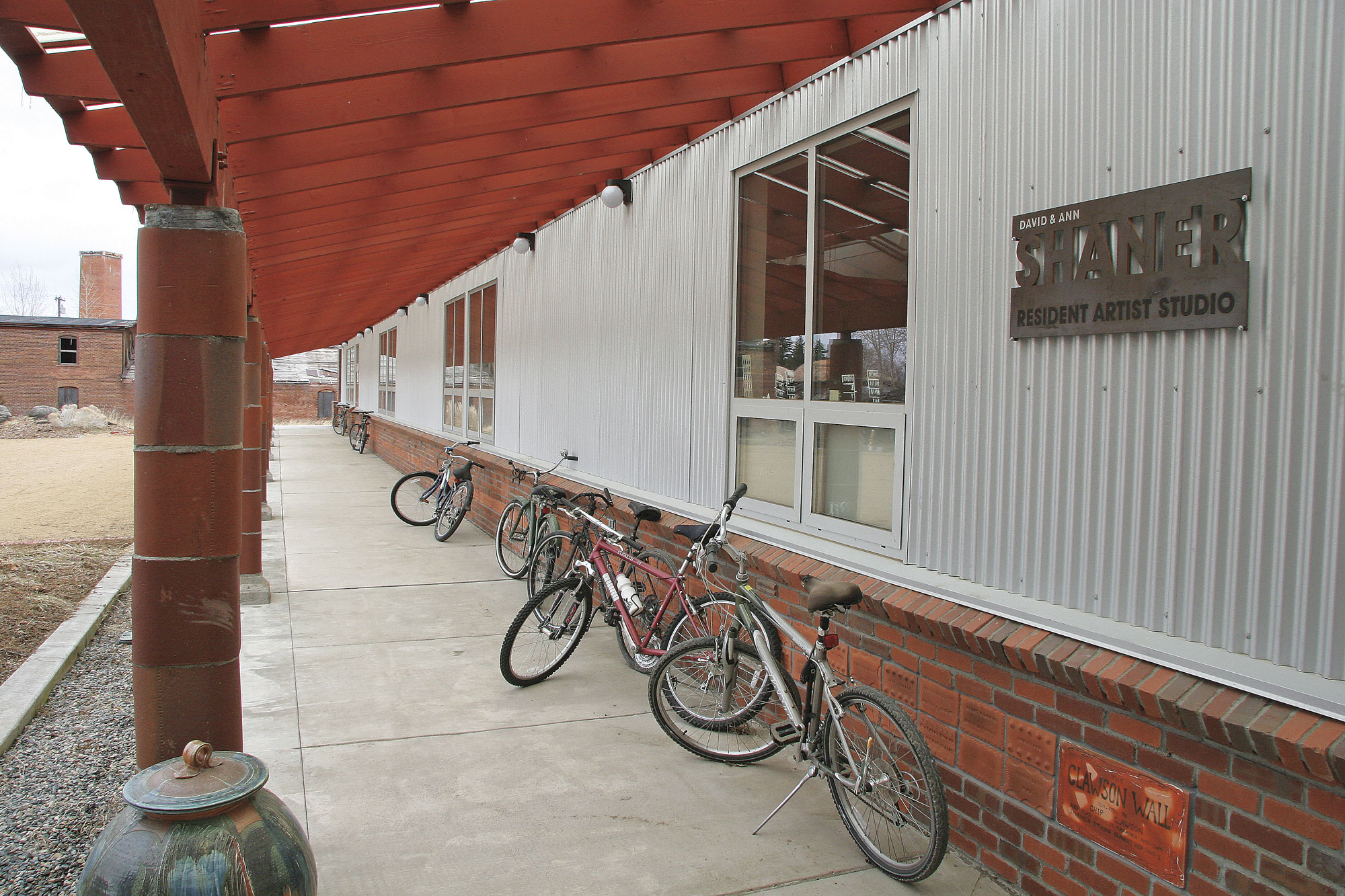 Bicycles wait outside the newest building on the sprawling grounds of the Bray, the David and Ann Shaner Resident Artist Studio Complex. 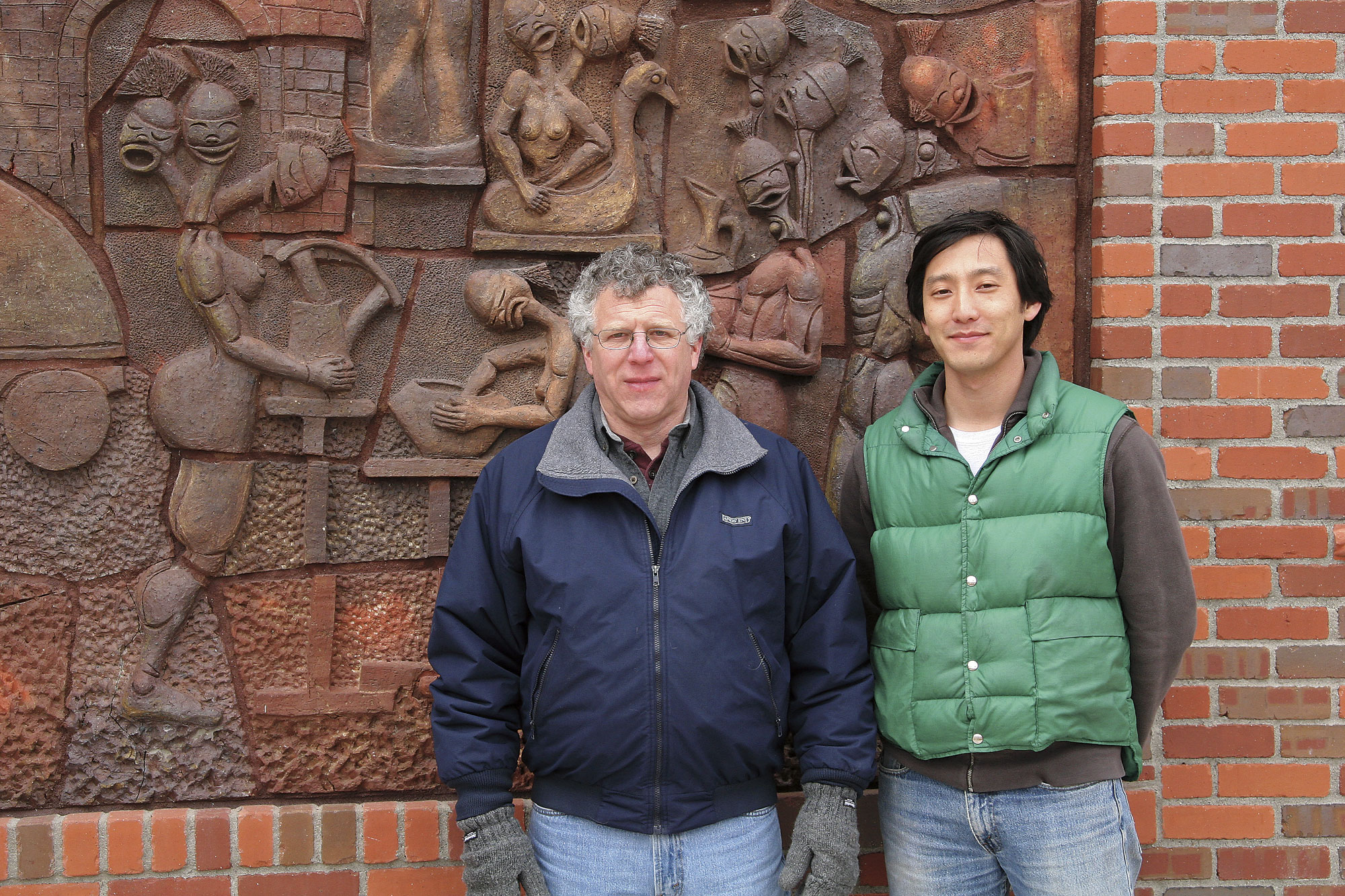 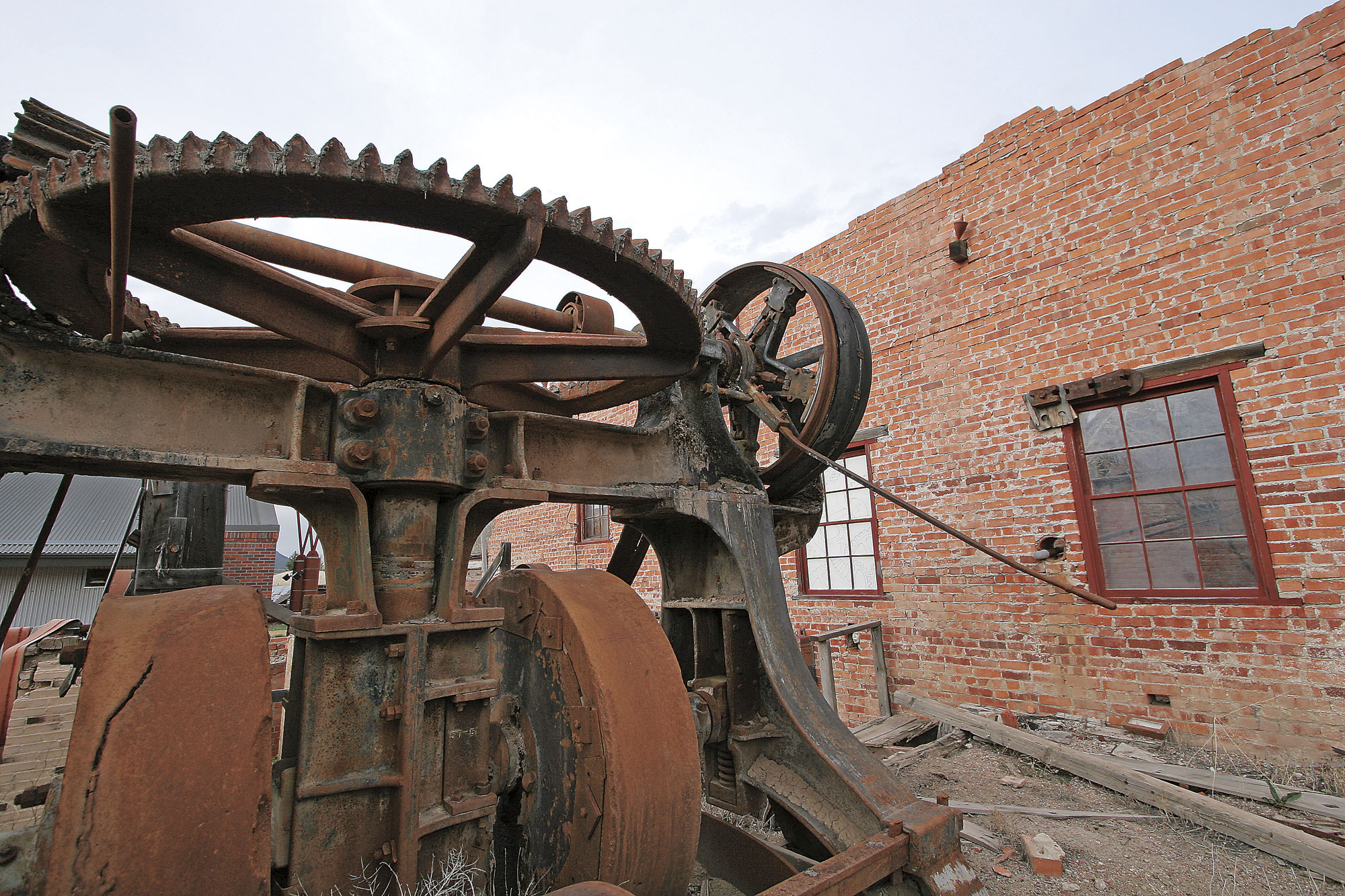 Rusting gears stand dormant, left over from the old brickyard. 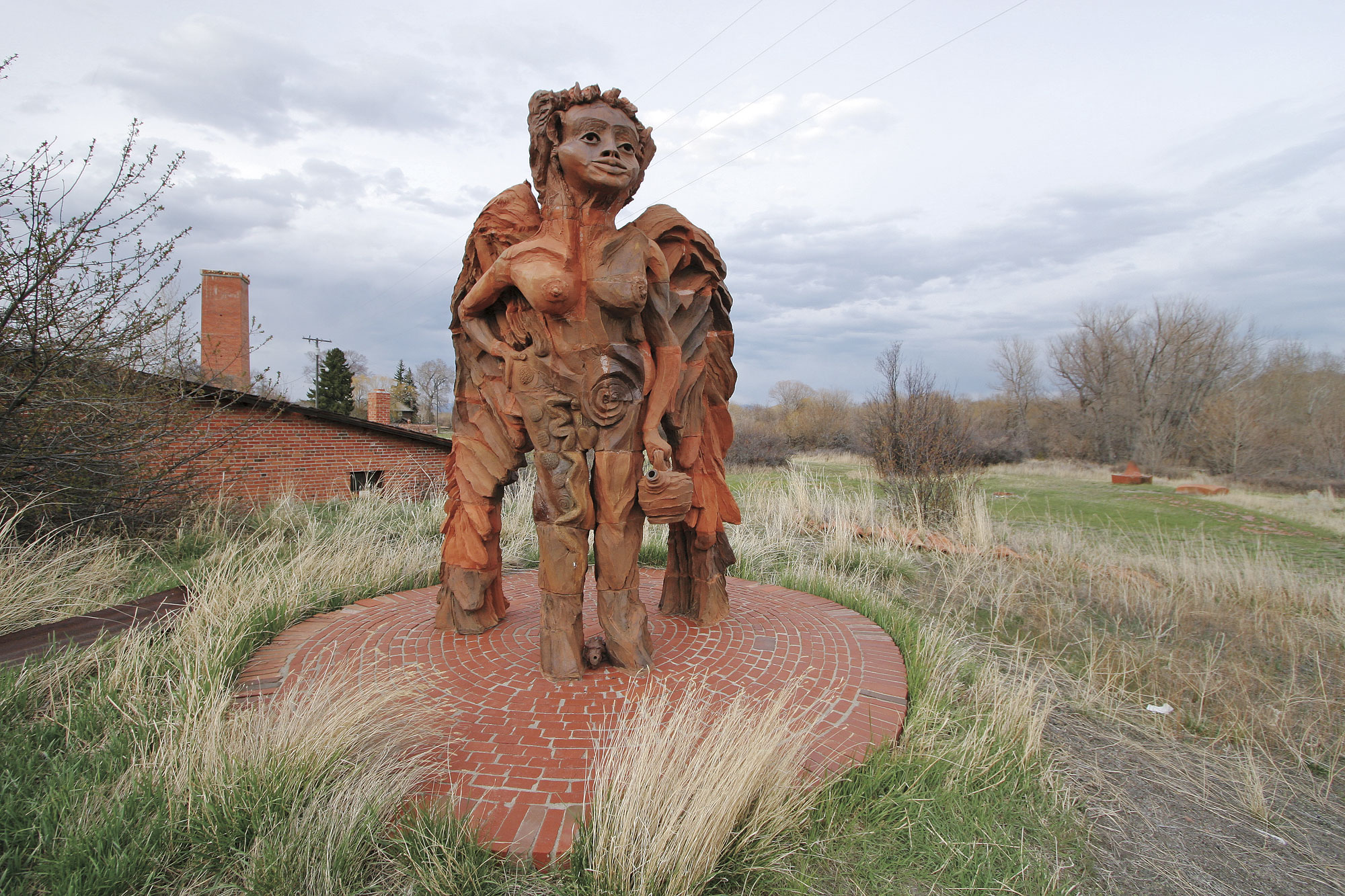 This is one of more than 200 pieces made for the grounds of the Bray. 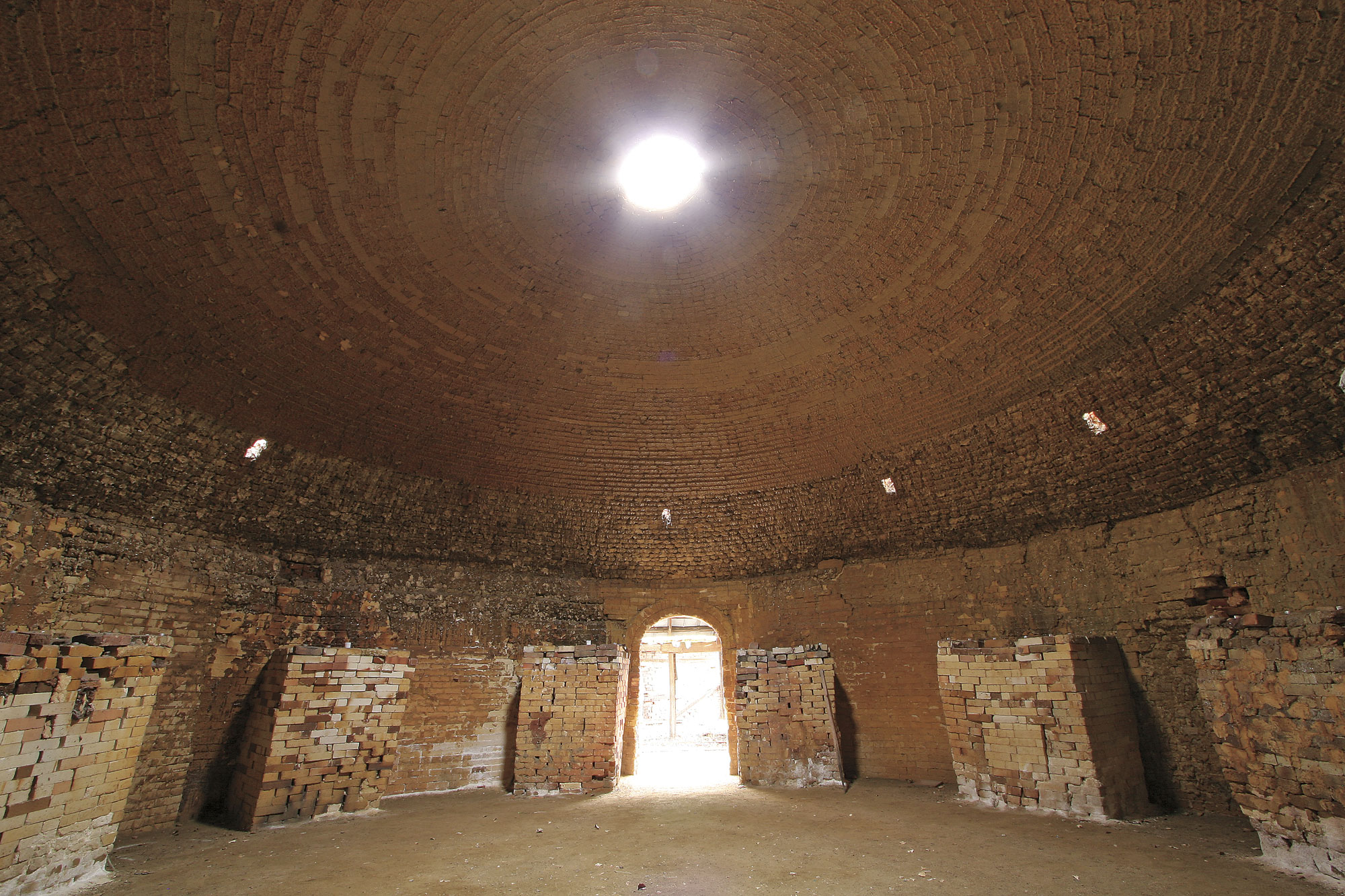 Shown is the view inside a 100-year-old beehive kiln. Most of these historic kilns are in disrepair, but some have begrudingly withstood time, enabling a glimpse into the past. 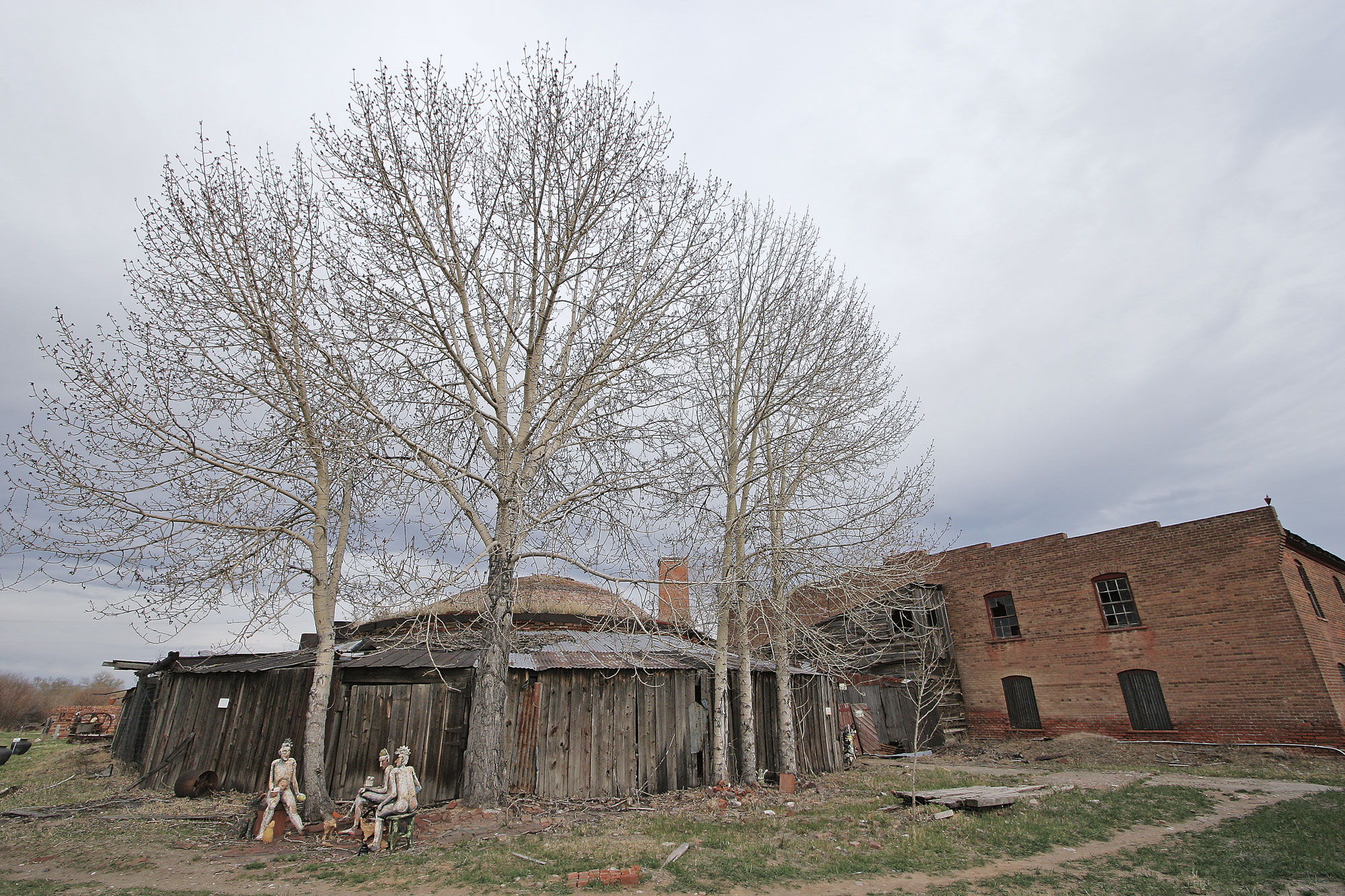 The old beehive kiln roof shows through in the background with site-specific figures stationed outside. 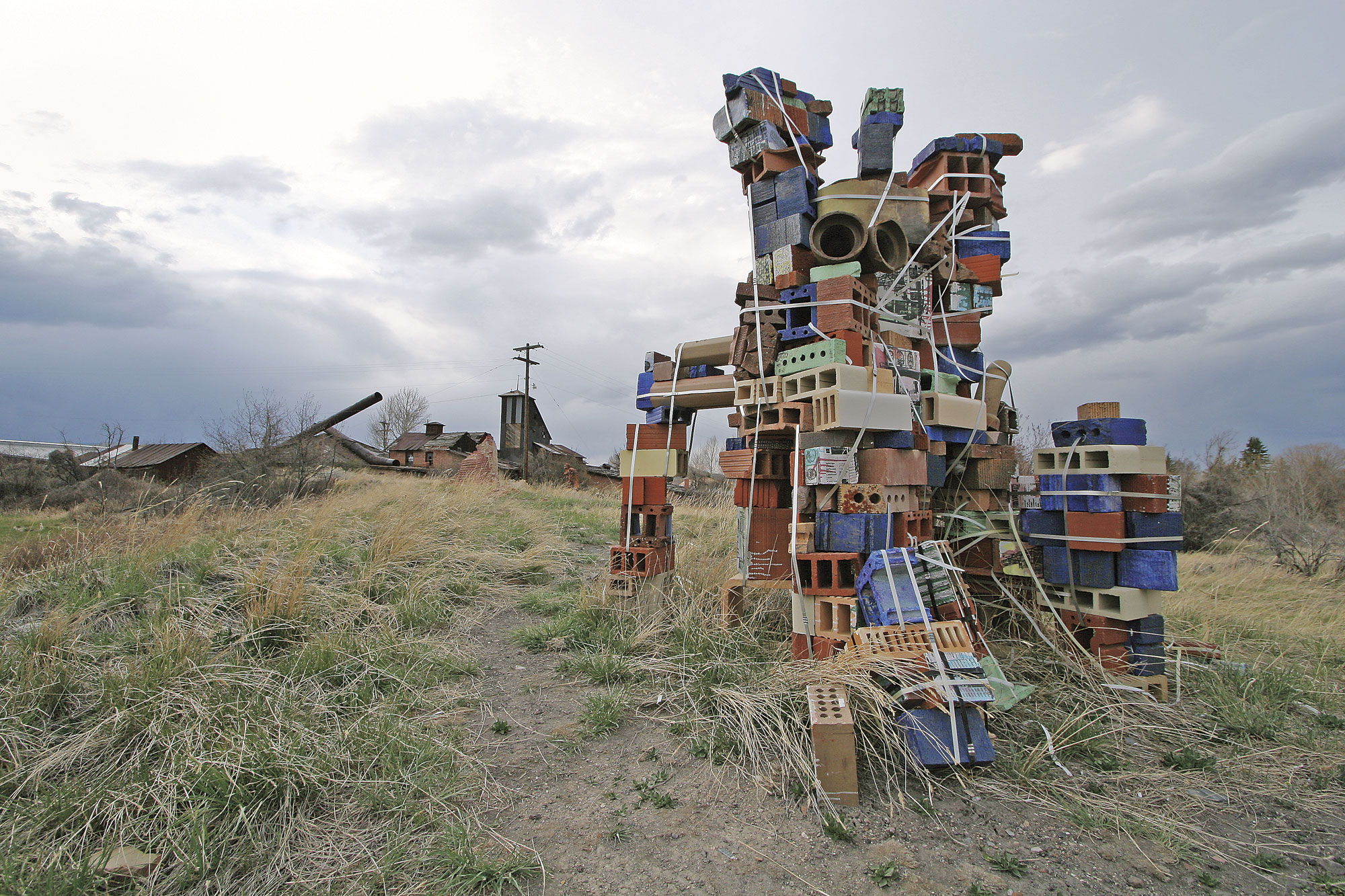 Bound and banded bricks from the original brickyard were dyed and silk-screened by artist resident Fred Spaulding.