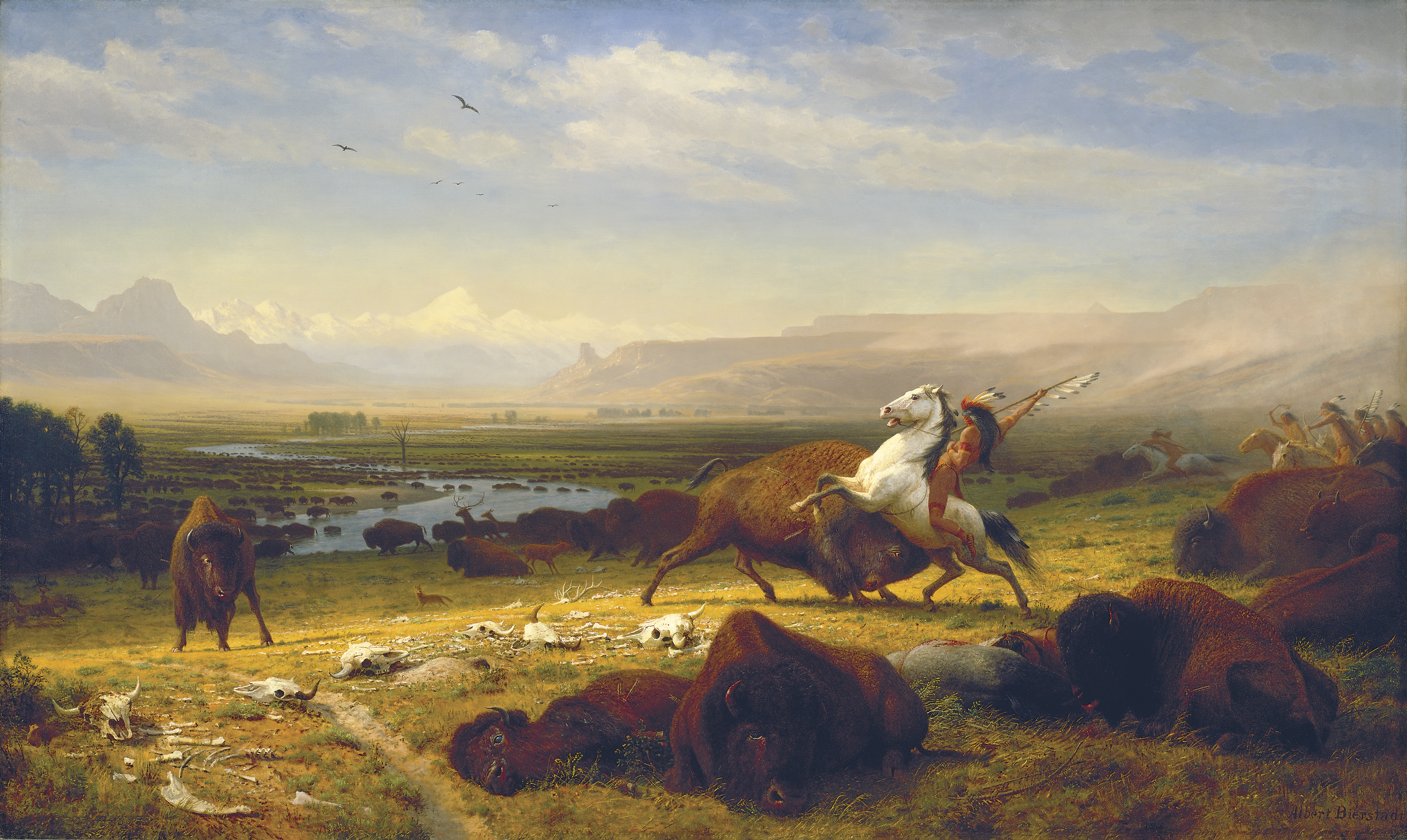 30 May The Art of Progress

Whenever I tire of Washington’s political machinations, I walk eight blocks from Capitol Hill to the Smithsonian’s American Art Museum — a Greek Revival temple high above the Mall — where hang two portraits of the Grand Canyon of the Yellowstone, each so vast as to transport one instantly to Wyoming. They are by Thomas Moran, an artist whose talent, more than any other’s, was responsible for Congress declaring Yellowstone our first National Park in 1872. The more impressive canvas (84-by-144 inches) was shown that year and sold to Congress for $10,000, then a gargantuan sum. A second larger view, painted from 1893 to 1901, flanks it, as does Moran’s The Chasm of the Colorado, painted from 1873 to 1874. These are the only paintings in the small Moran gallery, and to stand encircled by them is to be flooded by the water and space they depict.

I am a Washingtonian, a journalist who has covered this city, but I am also a wanderer who since 1959 has summered and often wintered in Montana, not far from Yellowstone Park. On a recent Sunday, pining for the West, I entered American Art and rode to its second-floor galleries. To my left was George Catlin’s Indian Gallery; ahead were Alfred Wertheimer’s photographs of the young Elvis, but to my right was an explosion of light I knew to be the vibrancy of Moran’s unique canvases. Confronting their colors — rust red, yellow, rose pink, mauve — was like emerging from a darkened theater to the high desert at noon. A docent stood beside the space’s circular stool, covered by a worn bison skin, or robe. I squinted against the paintings’ brightness and watched as two children spotted the robe, then headed for it.

The docent was patient as they rubbed and tugged its matted hair. She explained that the bison had been essential to Plains Indians’ survival, and that they had wasted not a part of it. She took from her cart a small, hide parcel she called a “bison box.”

“This was the Indians’ shopping mall,” she said. From it she withdrew horns, sinew, teeth, soap made from bison fat and even the bison’s bladder, used as a canteen. The children cringed, but the docent explained that the bison had provided everything the Indians needed.

On another day, in a journalistic funk, I’d left the White House and its daily press briefing, and walked two blocks to the Corcoran Gallery. There, in a far alcove of its American Art wing, hangs Albert Bierstadt’s epic The Last of the Buffalo, a 74-by-119-inch painting completed in 1888 that dwarfs even Frederick Church’s 42-by-90-inch Niagara and the canvases surrounding it. Like Moran’s 1872 Yellowstone, Bierstadt’s is a painting that, in its time, was considered political. Where Yellowstone was seen as a broadside for Westward Expansionism, and a postcard both preserving wilderness and luring settlers to adjoining regions, Last Buffalo was viewed as a plea for conservation and a lament for the frontier’s salad days. In its foreground is depicted a Native hunter as picador engaged in a Wild West showdown with a furious bison. Before them are skulls and carcasses spread against the plains fronting the Wind River peaks. For me it’s the landscape, a Turneresque depiction of ocher grassland and snowtipped mountains, that holds the power.

Minutes before, I’d been listening to commentary on trade imbalances, but now I was immersed in the “picture show” unreality of a carnival-like tour de force that for me was exquisitely real. Like Moran’s Grand Canyon, it was meant to provoke sentimentality, yearning. Though both artists had toured the West, Moran painted Grand Canyon from sketches in Newark, New Jersey, and Bierstadt, his Last Buffalo in New York City. I stood here in Washington and felt their longing. Or as Bill Clinton might have said, their “pain.”

Early in his administration, when the president was still jogging, I spent an afternoon at the National Gallery, then drove my little sports car at a clip, past the rear gate of the White House. Black SUVs appeared, a runner darted out and I hit the brakes, skidding. Before me was Clinton, his hands raised protectively, his great frame draped in sweats and his face ashen. I waved. He waved back. Quickly, I was enveloped by Secret Service, and as they sent the president along I couldn’t help picturing the Corcoran’s Last Buffalo, and wondering if he weren’t hurrying to see it.

As a boy it was my luck to have a grandmother and great aunt who made certain I visited the icons of our nation’s capital. These included the Washington Monument, the Lincoln Memorial, the National Archives’ Declaration of Independence, the Library of Congress, the Capitol with Congress in session and the Smithsonian. I don’t recall whether I saw Moran’s Grand Canyon, but in art books I studied Thomas Cole’s 1836 The Course of Empire and Emanuel Gottlieb Leutze’s 1862 Westward the Course of Empire Takes Its Way: the first cautionary, the second championing empire’s limitless possibilities. That the latter would be hung in American Art — once The Patent Office dotted with myriad inventions that sought to ease America’s struggle to fulfill its Manifest Destiny — was not lost on me. I might have seen John Gast’s American Progress, an 1872 painting that critic Alan C. Braddock considers “an allegory of technological conquest.” In it, a goddess figure soars across the plains, in one hand a book of knowledge, in the other telegraph wires. “Progress was God,” the governor of Colorado would write in 1873.

My great aunt worked at Patent, as had Walt Whitman, during the Civil War. He nursed wounded soldiers, bivouacked in its halls and wrote, “It was a strange, solemn sight, the glass [invention] cases, the beds, the forms lying there … then the amputation, the blue face, the groan, the glassy eye of the dying.” Whitman was employed briefly at The Bureau of Indian Affairs, housed at the museum, but was dismissed when Leaves of Grass was deemed by his superior “an indecent book.”

Art was not held sacrosanct by government, though it might exploit it. This paradox was conspicuous on the museum’s first floor. Removed from Moran’s, Bierstadt’s and Church’s ecstatic celebrations of landscape, stood a folk assemblage titled The Throne of the Third Heaven of the Nations’ Millennial General Assembly. It had been made by a Government Services Administration janitor of African heritage, named James Hampton, who dubbed himself “Director, Special Projects for the State of Eternity.”

His was the premier piece of Washington art and it was junk; I don’t mean that pejoratively. Constructed of found objects such as light bulbs, jelly glasses, old tables and armchairs wrapped in silver and gold foil and collected in alleys not far from the Capitol, it was inspired by the Book of Revelations, predictive of apocalypse, critical of bureaucracy … and magnificent. Often I contemplated its mysteries. “Fear Not,” was written above its throne. In the garage where Hampton had constructed it hung a quote from Proverbs: “Where there is no vision, the people perish.” Hampton was a visionary who claimed to have seen the Virgin Mary hovering above the Capitol, pointing him toward his goal. Which was to build God’s throne from the detritus of empire. To me, back in the Moran gallery, Hampton’s Virgin seemed a phantom not far in substance from Gast’s muse in his Vision of Progress, shepherding the pioneers west.

My progress from a fourth-generation Washingtonian to a spiritual Westerner had been encouraged not just by the escapism of Roy Rogers comics, Hopalong Cassidy TV and summers in Montana, but by the psychedelically mind-altering paintings at hand. Even today their colors staggered. Destiny (call it progress) in my dotage may be to follow the path they’ve suggested. On this gray afternoon in the capital, Moran’s canvases, drawing me in, pointed the way.