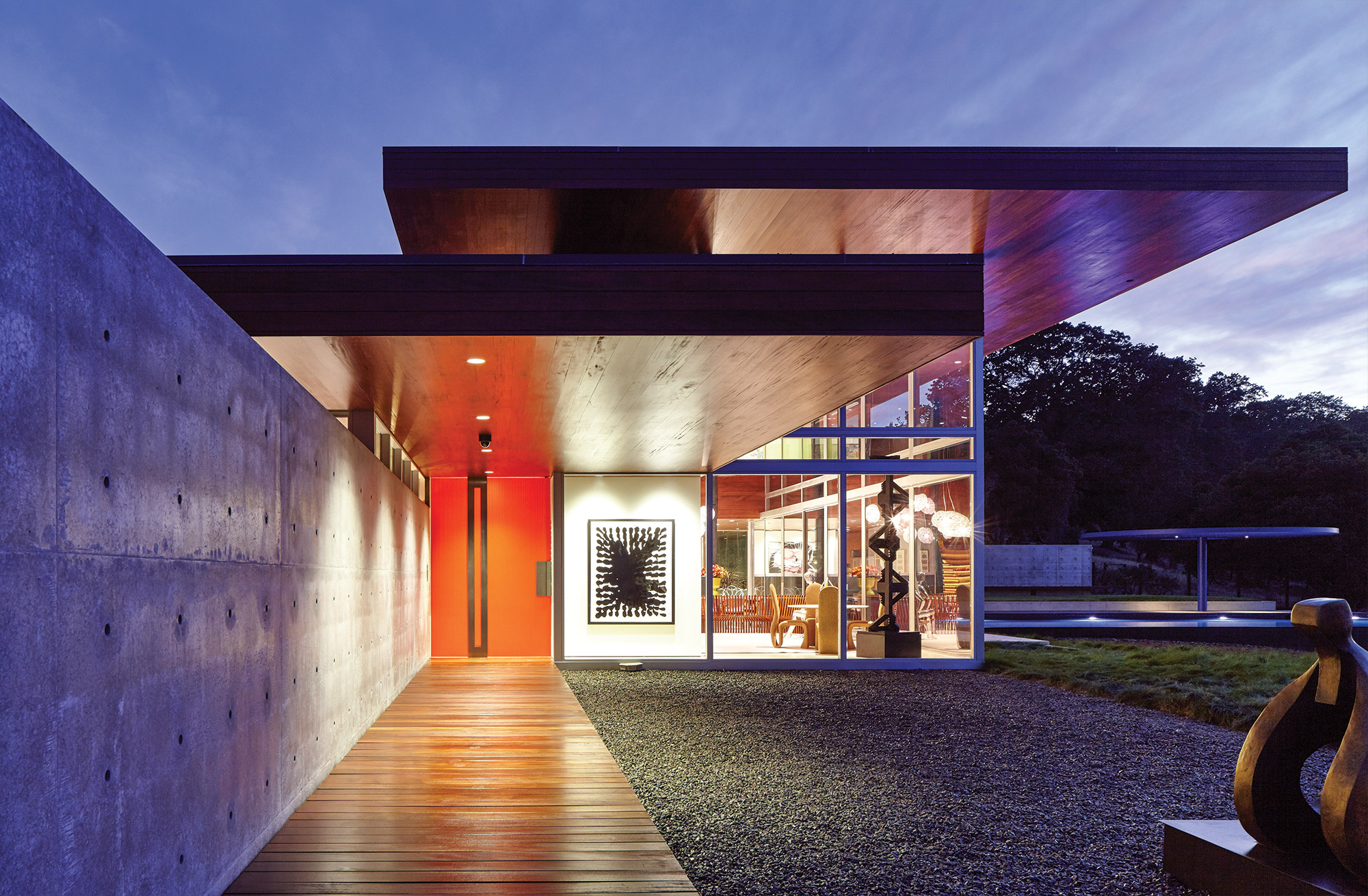 A seasoned architect willing to push boundaries and an art-loving homeowner with a strong, eclectic sense of design teamed up to make this hillside home a showstopper.

17 May The Art of the House

WHEN ARCHITECT ROBERT SWATT sat down with Nicole Vidalakis to discuss the home she had in mind for a hilltop property south of San Francisco, he was in for a few surprises. “I don’t want a house. I want an art installation that I happen to live in,” Vidalakis said. It didn’t need to be comfortable, she added; it was more important that she liked the way it looked. She was inspired by California modern architecture and imagined a structure that could have been designed 50 years ago or 50 years in the future. On top of that, Swatt remembers, “She talked about ‘accessorizing’ the house, as if with jewelry — details that glisten.”

Swatt was among some 30 architects Vidalakis interviewed as she searched for the perfect firm to design her Portola Valley home. A Stanford-educated Ph.D. psychologist, she has a keen eye for detail, the soul of a homebody and the thoughtful perspective of an artist. The home would be her full-time residence, so she needed an architect who would collaborate with her to produce a work of art in which she and her young daughter would love to wake up in every day. She found that person in Swatt. “Bob really is an artist,” Vidalakis says, sitting in the dramatic glass-walled home, its three levels hugging the property’s gentle slop.

As an architect in the San Francisco area for more than 40 years, Swatt specializes in California modern architecture. “I grew up in L.A., so it’s in my DNA,” he says. His work focuses on residential properties, while his partner at Swatt | Miers, George Miers, handles commercial and institutional projects.

Once Vidalakis knew she could trust her vision to Swatt, she gave him virtually free reign. “I want you to do what your other clients wouldn’t let you do,” she boldly directed him. “Any ideas you have that would be perceived by others as outlandish, I want to see those.”

Building the resulting design involved taking some risks. The 30-foot-tall concrete tower flanking one side of the home, for example, was erected in a single concrete pour, using specially engineered forms — basically an unheard-of feat in the building world. But it worked. “Lencioni Construction did a great job,” Swatt says. Adding to the complexity of the design, Swatt covered the exterior of the tower’s wraparound windows with mahogany and stainless steel planks to filter the California sunlight.

The architect also diverged from his usual approach by incorporating both aluminum- and wood-frame windows in one home. The expansive, southern wall was constructed from custom mahogany-frame windows. “The wall of windows takes the shape of the stairway, so I decided to [use] wood and create a sculptural element,” he says. The long staircase also produces a chimney effect, helping keep the home cool despite its glass walls. Operable windows and doors at the bottom let in cool air, which is drawn naturally up the stairway by convection. The warm air exits through windows and doors at the top. “It gets pretty hot here, and frankly I was a little nervous about how the chimney effect would work,” Swatt says. “I’m very happy it did.”

While the architecture was up to Swatt, Vidalakis was intimately involved in decisions about materials and finishes. She also served as the interior designer for the 7,000-square-foot home. She told Swatt she wanted only “real” materials, a requirement elegantly met with concrete, wood and glass. Along with the home’s openness and strong planes, this selective use of materials helped produce the particular feeling Vidalakis was seeking: masculine, clean-edged, a little “like a bank from the 1960s,” yet not cold or hard. “I’m super feminine,” she says.

This feminine quality was reflected in Vidalakis’ request for touches of adornment in an otherwise relatively minimalist home. Among the elements expressing this concept is a row of floor-to-ceiling stainless-steel rods that separates the living room from the entrance hall and produces a sense of visual rhythm. The front entrance itself, a 9-by-6-foot pivoting door made of translucent orange glass, also became a “jewel” bedecking the home. And beside the linear pool is a bright blue, disc-shaped metal sunshade, 25 feet across and punctuated by an 8-foot circular hole, another focal point of color against primarily neutral hues. The pool itself was situated to be an eye-catching feature upon driving up to the home. Its three infinity-edge sides rise 7 feet above grade, adding an extended wedge of black stone to the lines of the home.

Having collected art since she was 20, Vidalakis found the perfect spot for a number of pieces she has owned for years. Among them is a series of large, colorful face paintings whose placement echoes the structure’s vertical elements as they rise up one living room wall. Also in the living room, visible from inside and out, is a tall, black, geometric metal sculpture that Vidalakis purchased from an estate sale on eBay. She found three pink 1980s Richard Schultz outdoor chairs on eBay as well, one of which she keeps inside. It sits across from a curved, 1970s Astral Bench, this one custom-made for her in mahogany by designer Thomas Moser. “All my furniture is see-through,” Vidalakis says. “I like the feeling of airiness, like trees or bushes, evoking the outside in.”

Vidalakis’ eye for detail encompasses everything from her landscaping choices — a hillside of tufted pink muhly grass to contrast with the pool’s dark color and shape — to having kitchen appliance handles custom made so they match. In this sense, she and Swatt were an excellent match. “Bob really took great care with every detail,” she says. “He and I share that appreciation for consistency and that everything matters.”

For his part, Swatt was equally pleased with both the process and the resulting home. “We loved working with Nicole. She’s so artistic and had a lot of passion about this.” 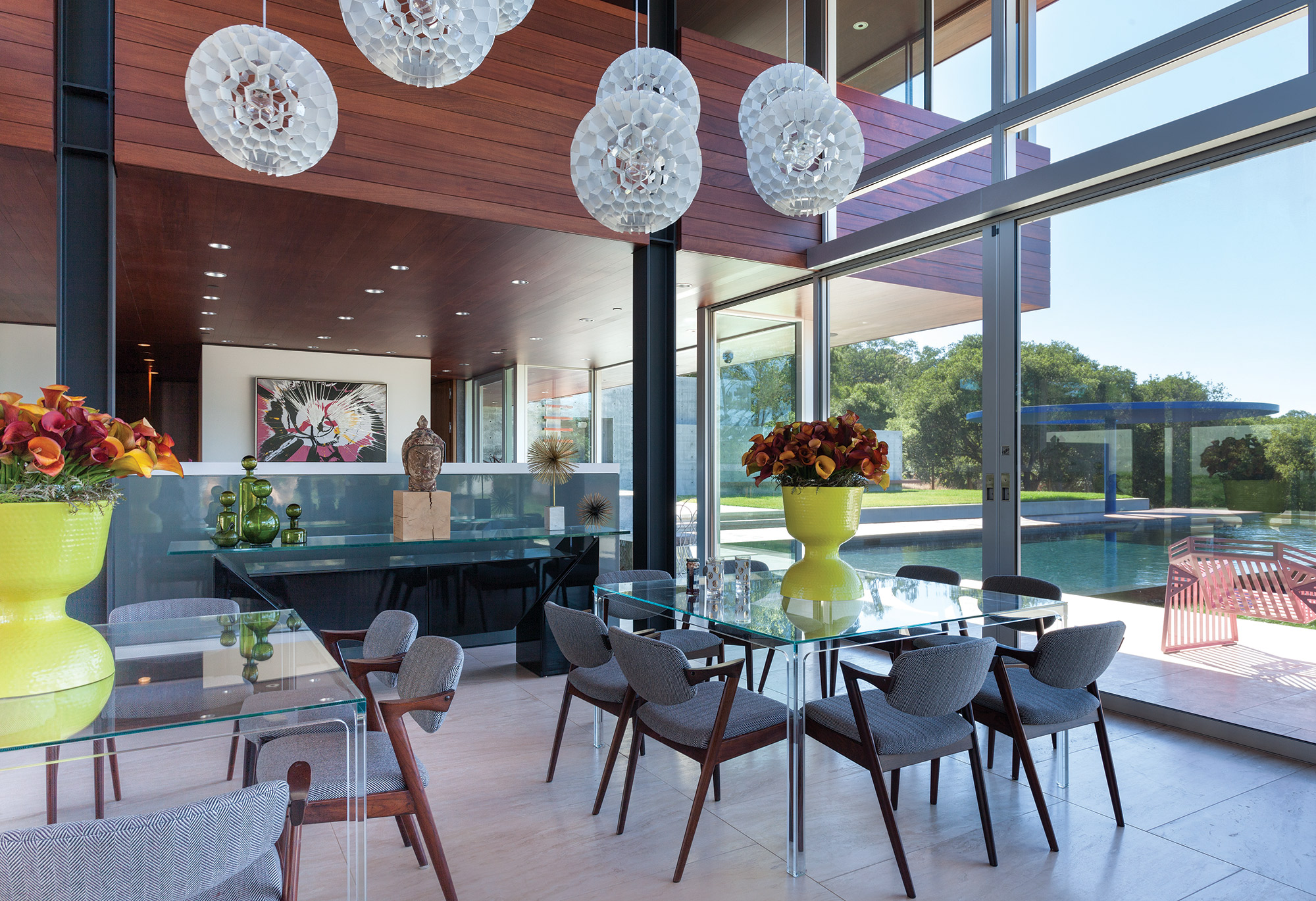 Nicole Vidalakis envisioned a home where she could host large events for friends and family or quietly enjoy a beautiful, art-filled space with her young daughter. 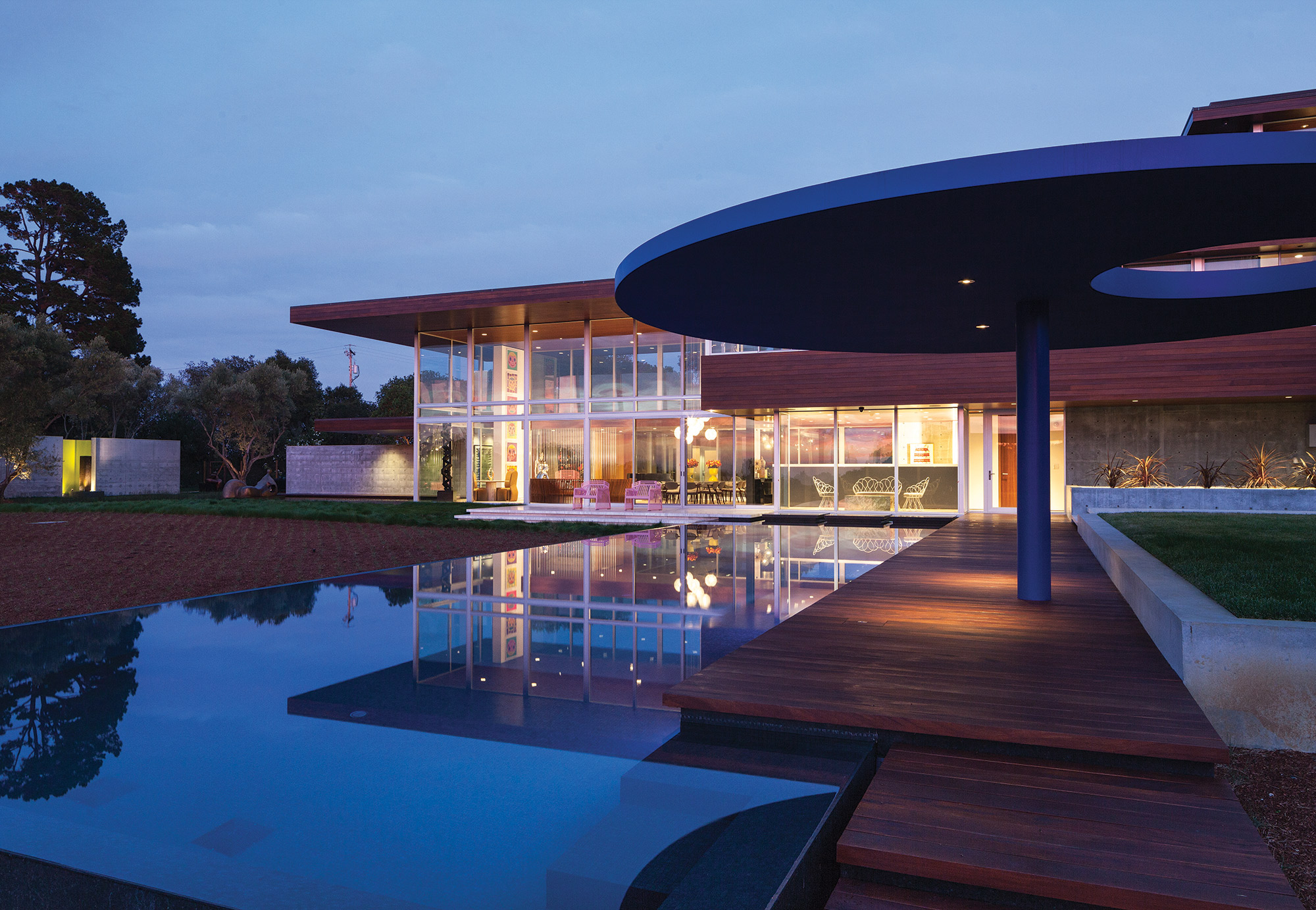 Vidalakis eschewed convention by placing the long, linear pool at the front of the house where she can see it from the kitchen. 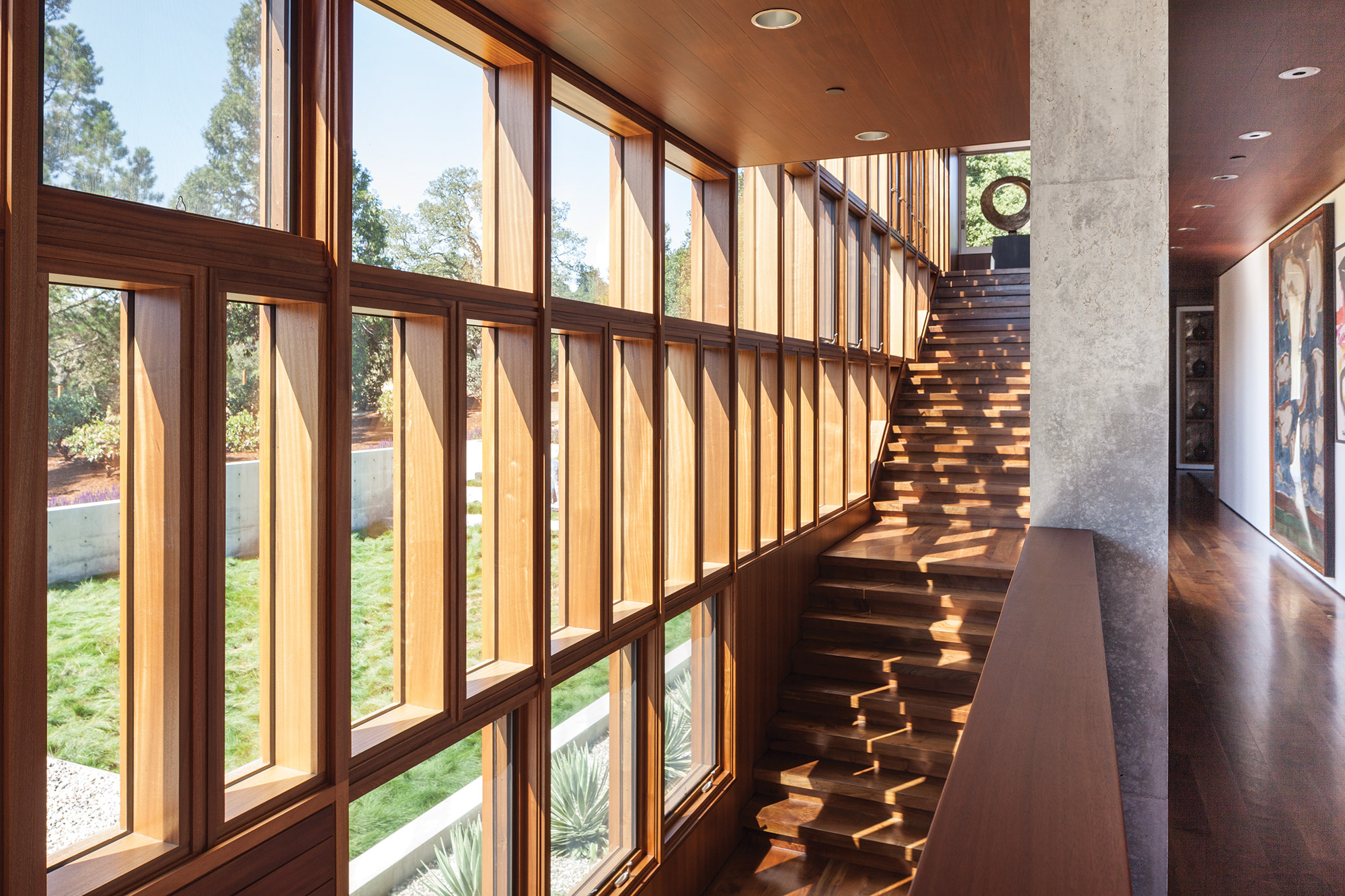 Although the home is almost 75 percent glass, the long stairway functions as a chimney, drawing warm air up and out, and keeping the interior cool without air conditioning. 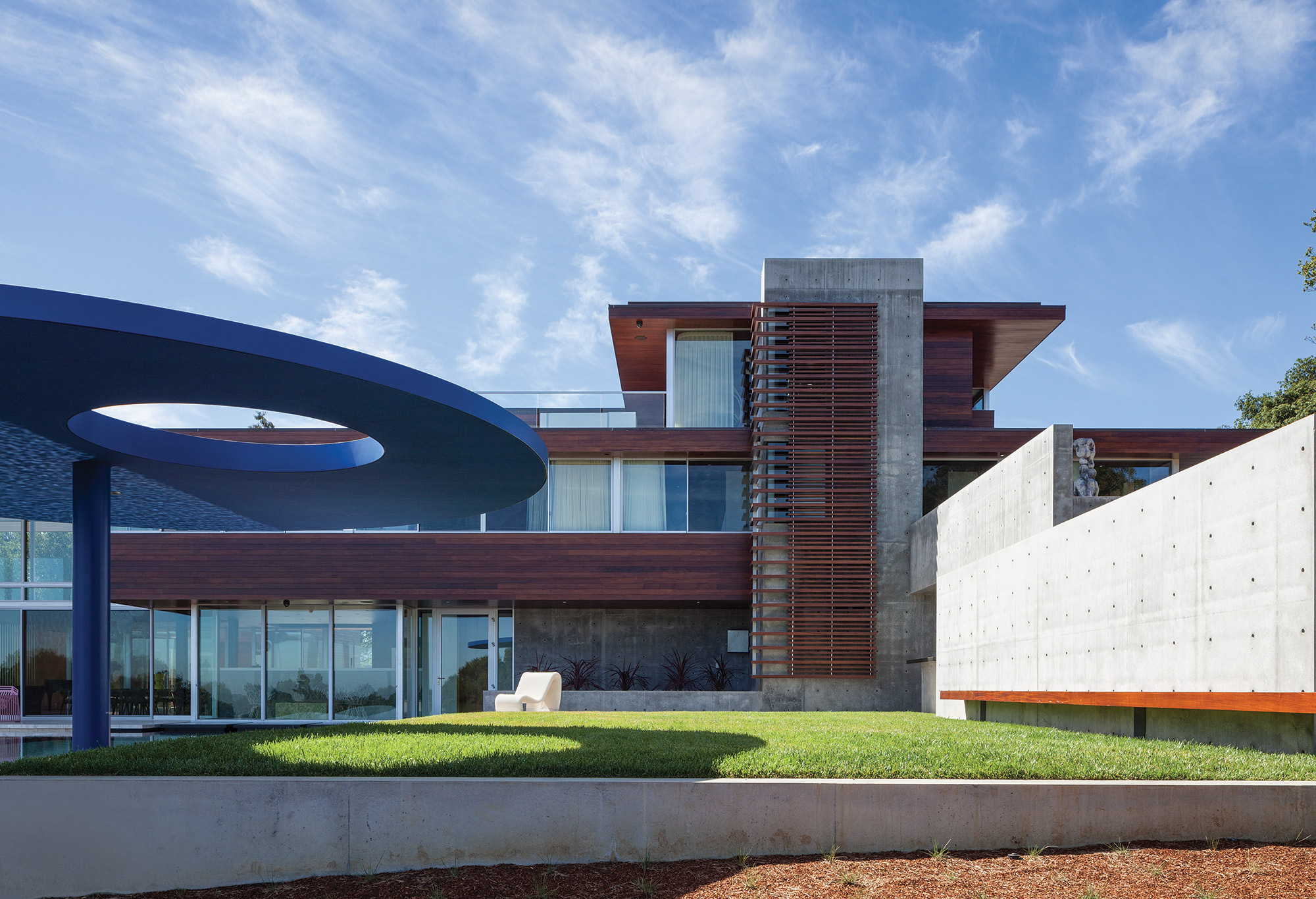 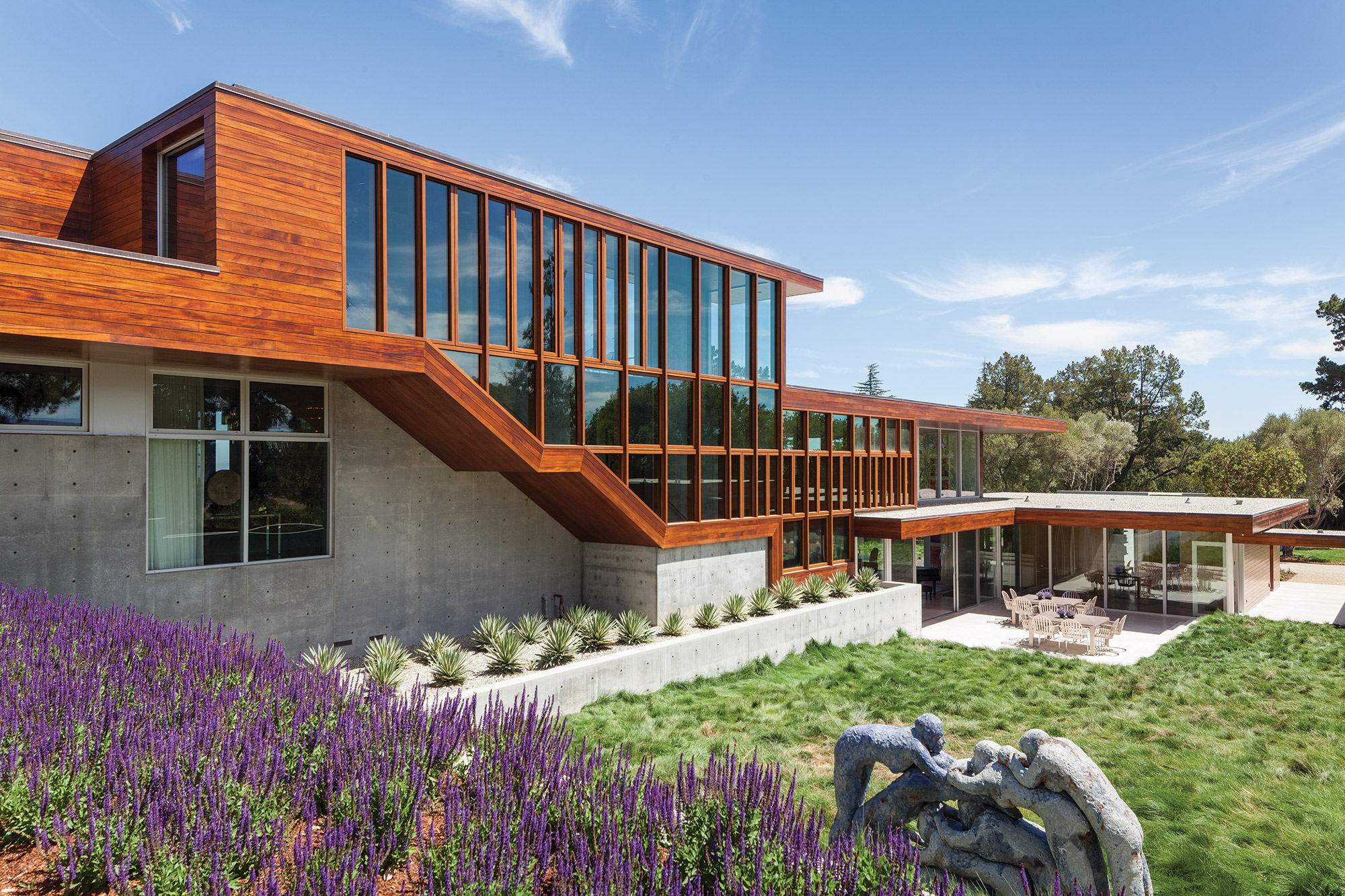 Swatt designed the home to conform to the gently sloped terrain. 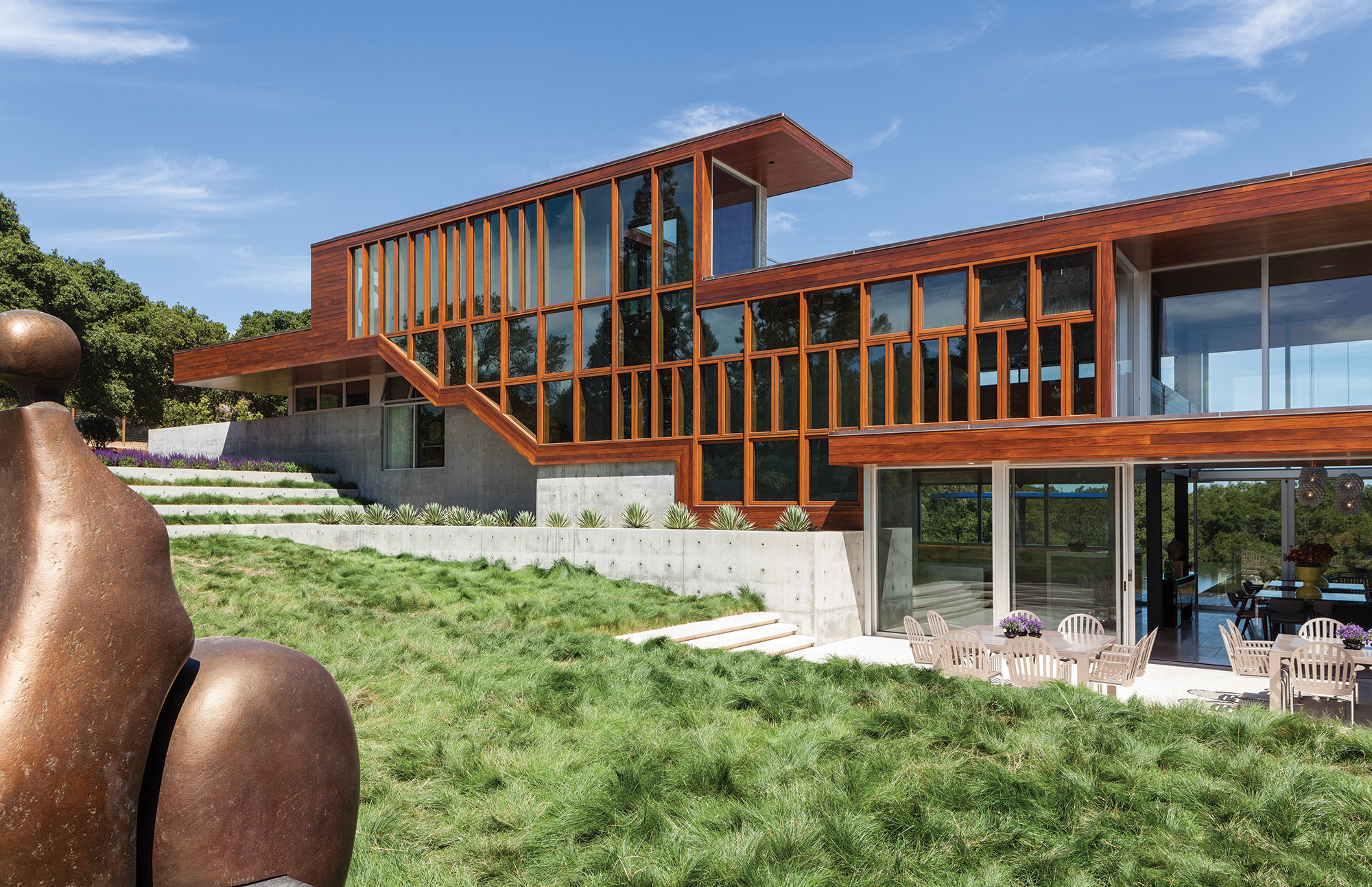 Based on architect Robert Swatt’s longtime focus on California Modernism, Vidalakis gave Swatt virtually free rein while stipulating the use of real materials, including concrete, glass and wood. 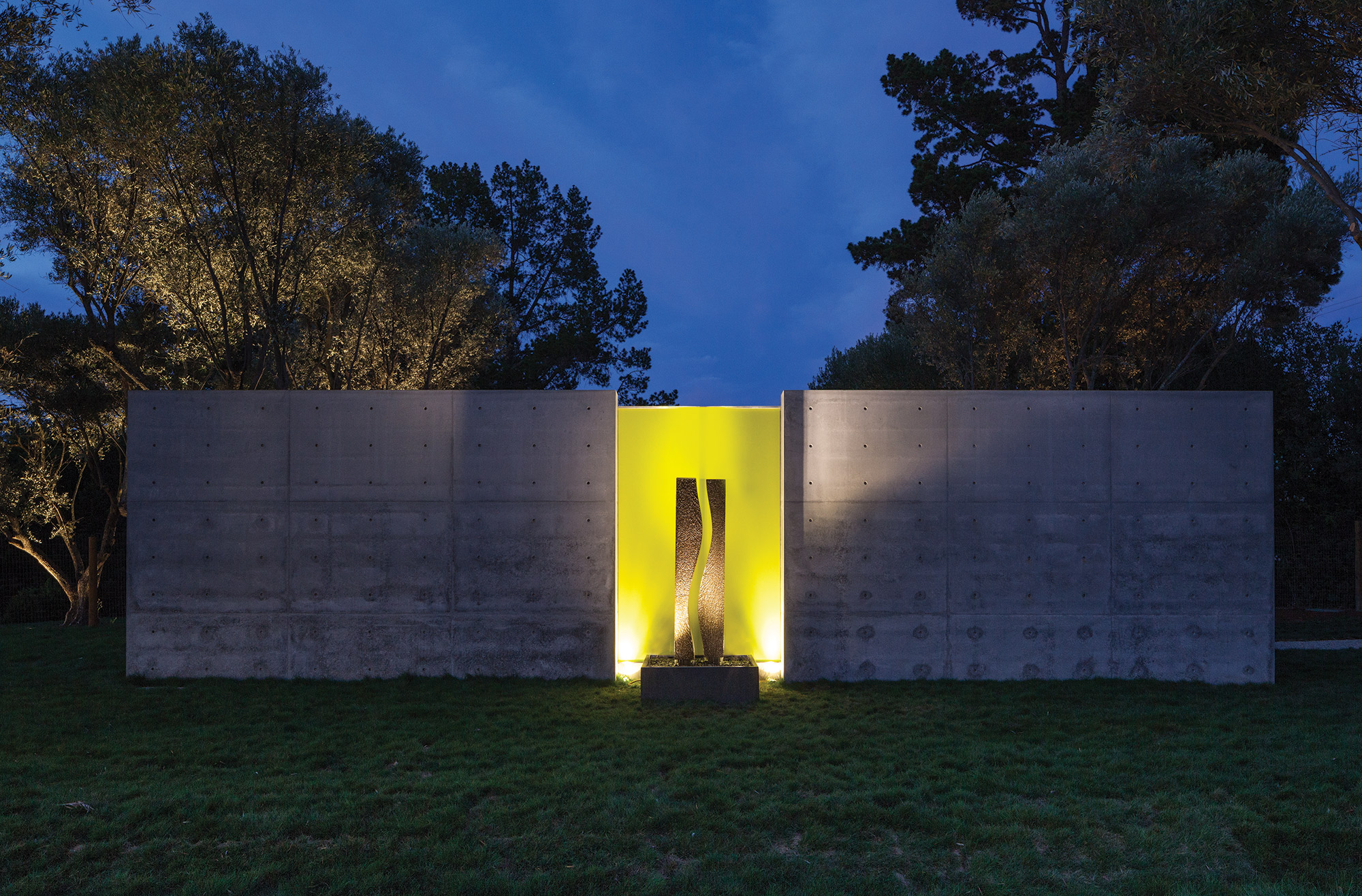 The juxtaposition of simple materials with abstract sculpture reflects the homeowner’s contemporary taste. 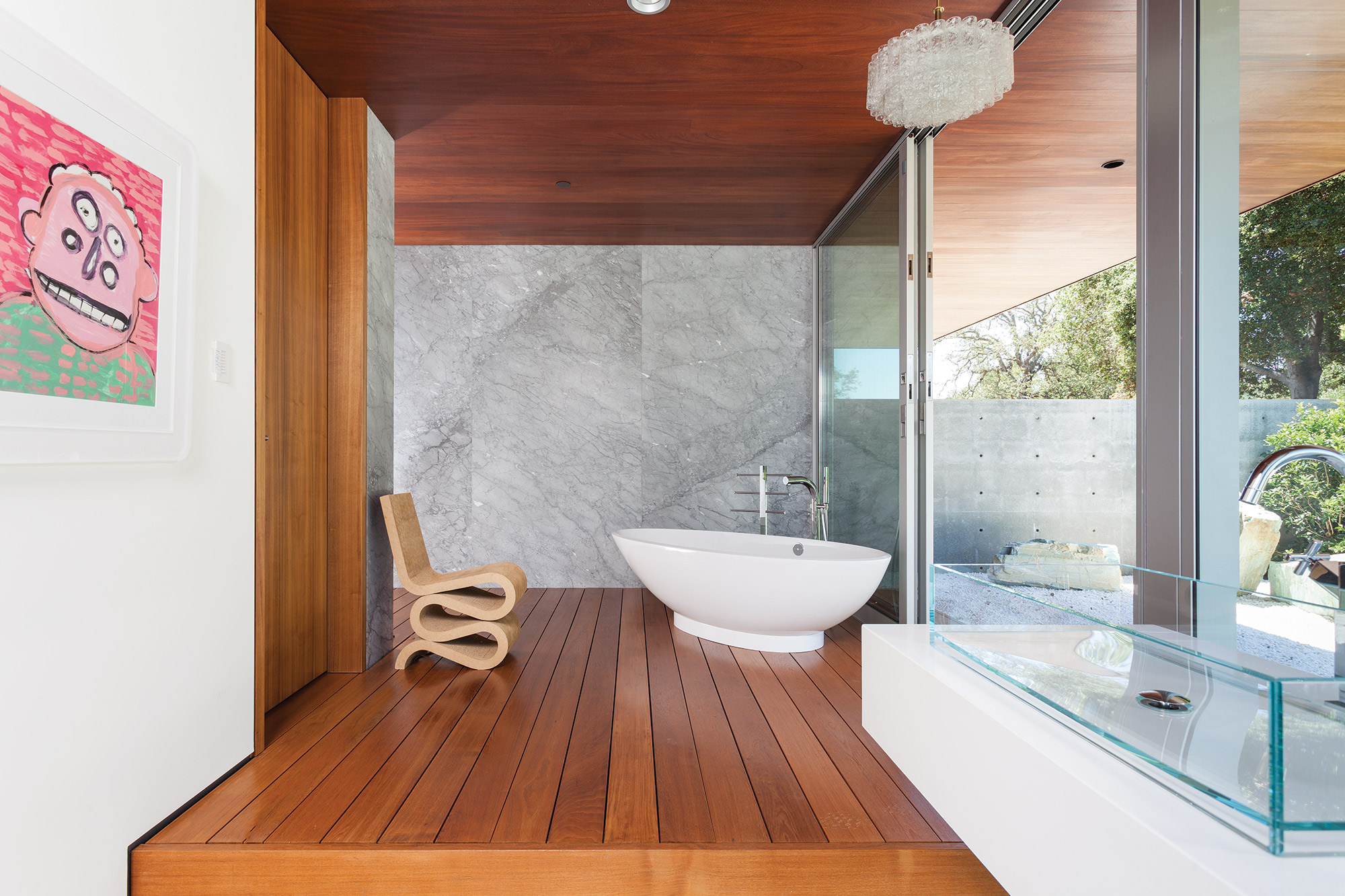 A minimalist aesthetic defines the master bath, while a glass wall draws the eye to expansive views of San Francisco in the distance. 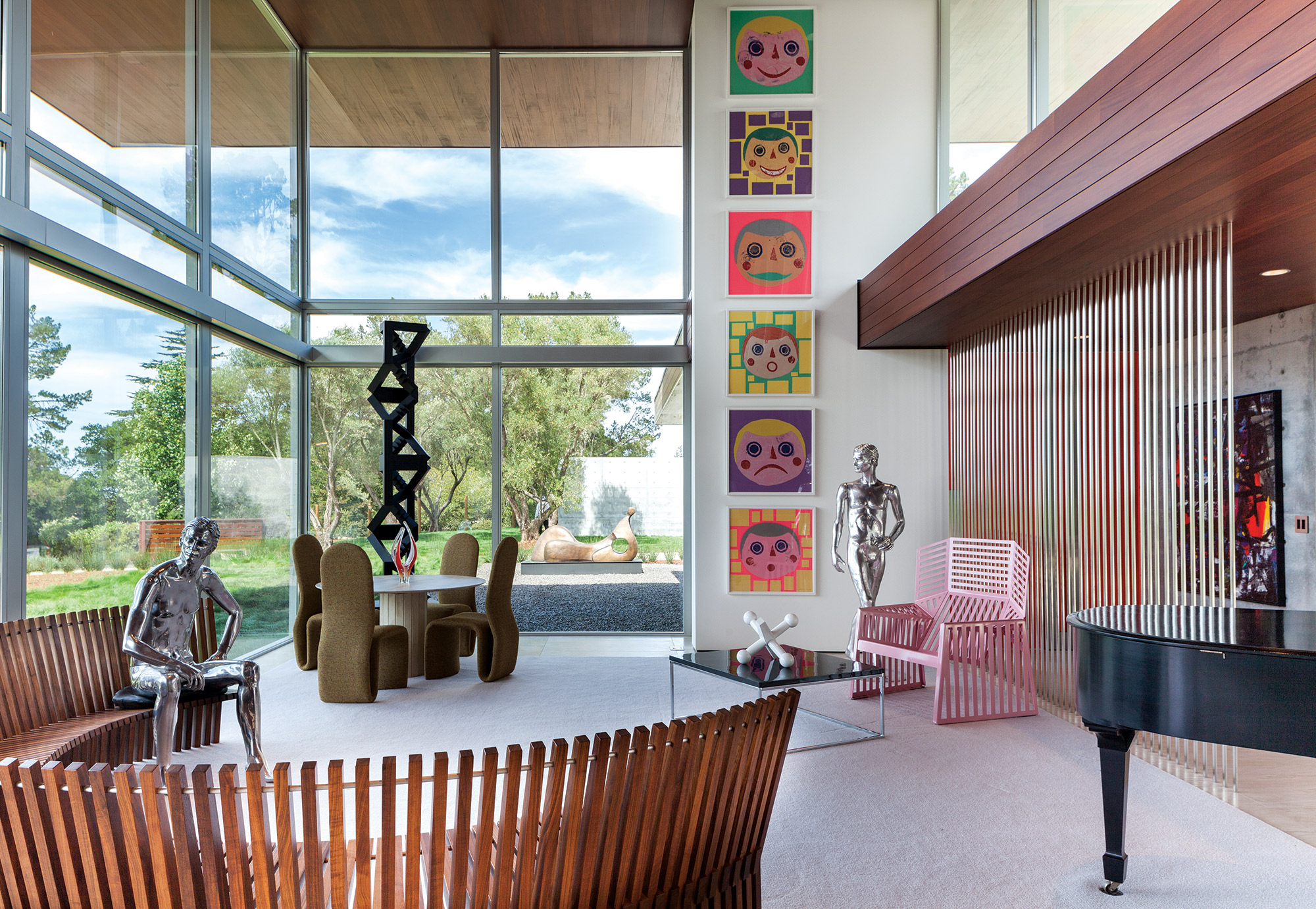 Vidalakis achieved her desire for a home that feels like an art museum. Aluminum Arthur Court mannequins from the now-defunct I. Magnin + Company luxury department store in San Francisco add the feeling of viewers admiring the art. 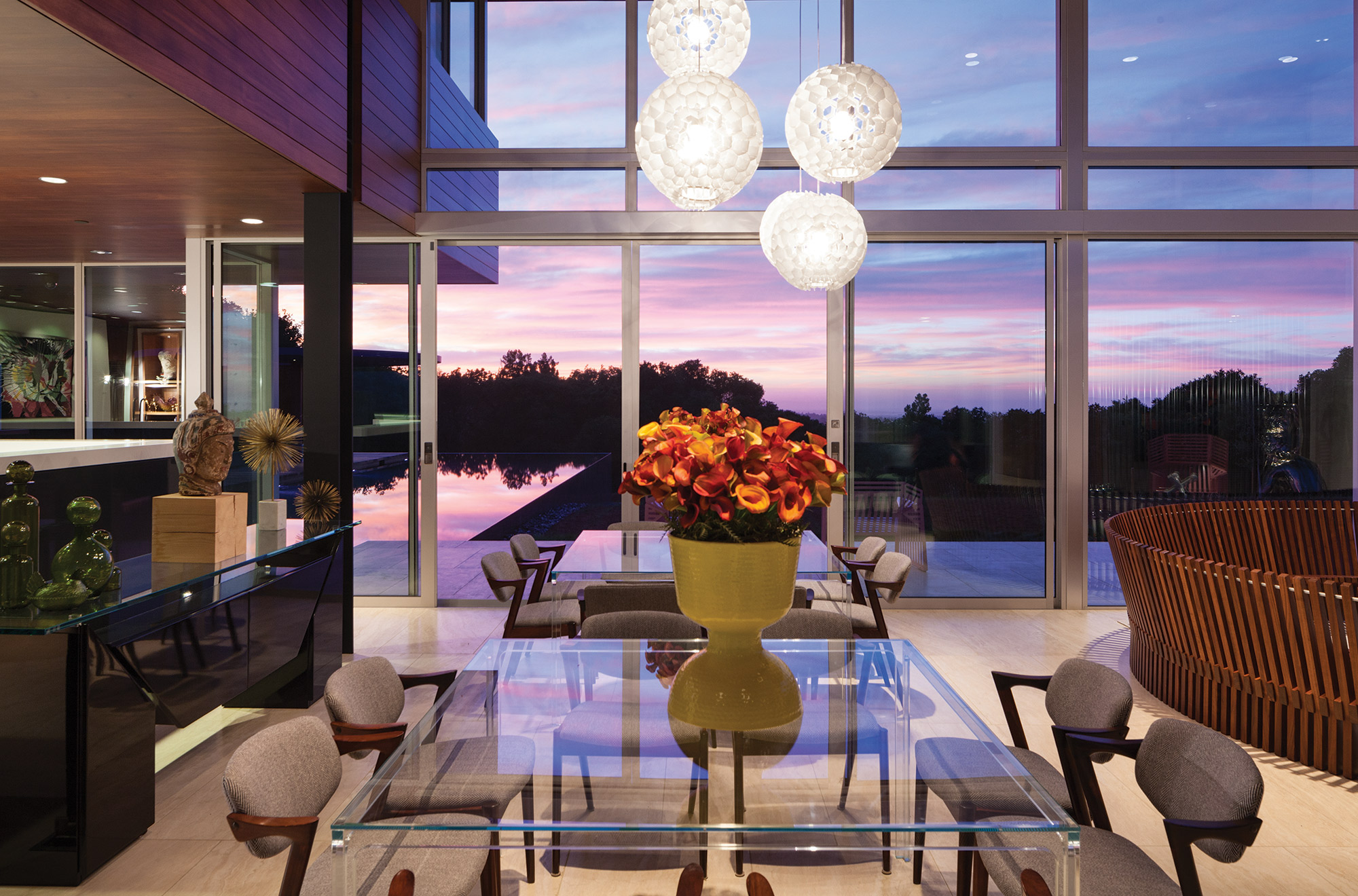 Vidalakis says her young daughter loves to give friends tours of “Philomena Farms,” the house she thinks is beautiful and which is named after her.