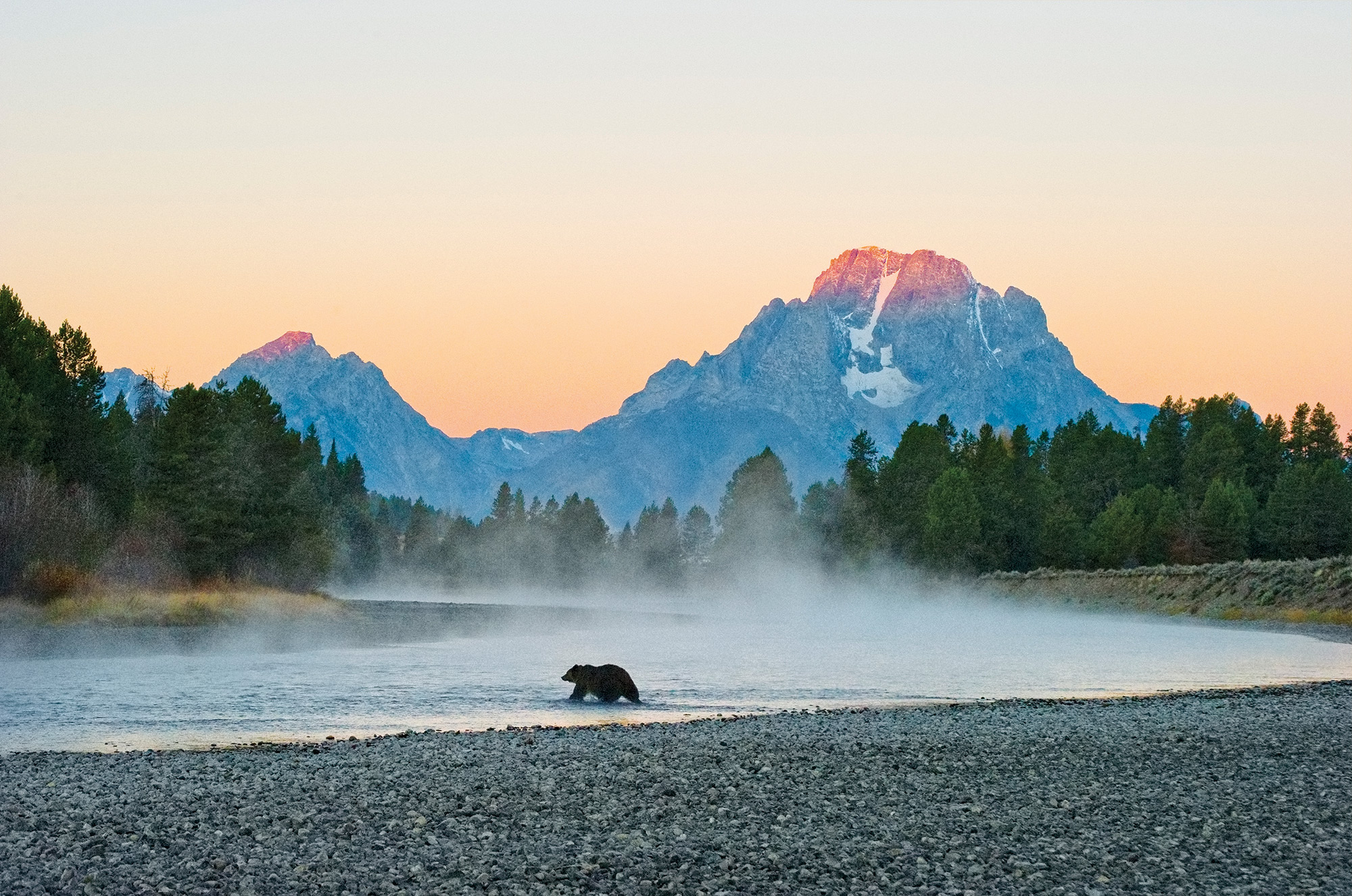 UNBELIEVABLE THOUGH IT MAY BE, collectible wildlife photography in some circles is dismissed as a lesser fine art form. But consider the impact and proliferation of imagery by American nature photographer Thomas D. Mangelsen.

Mangelsen’s epic landscapes adorn corporate boardrooms in urban skyscrapers. His animal pictures, sometimes billowing with atmosphere, fill wall spaces in the great rooms of multimillion-dollar trophy homes. Equally meaningful to him is that thousands of other admirers of his work, including folk of modest means, proudly own his prints, coveting them with no less esteem than an original painting or bronze sculpture.

At Mangelsen’s rustic cabin home south of Moose, Wyoming, the Teton Range rises almost surreally just to the west. A cow moose and calf splash in a pond where only moments before a pair of trumpeter swans lifted off. In a meadow bursting with wildflowers, a buckboard wagon holds the same unpretentious demeanor as Mangelsen. Once upon a time, that relic had been used as a prop in the Western film classic, Shane.

More than 40 years ago, Mangelsen was given a bit of advice also bestowed on one of his idols a few generations earlier. Ansel Adams, who composed The Tetons and the Snake River in 1942, had once been told there was no solid market for realistic nature photography apart from a documentation role.

Adams, of course, as with Eliot Porter and many others, proved the premise wrong. Along with a gifted group of modern contemporaries ranging from the late Galen Rowell, Art Wolfe, David Muench, Frans Lanting, Jack Dykinga, Philip Hyde, Jim Brandenburg, Robert Glenn Ketchum and James Balog to younger shooters, Mangelsen has been in the thick of it, helping to blaze a 21st-century subgenre called “conservation photography” that aims to inspire viewers to help protect what remains of wild Earth.

His latest project is a book titled Grizzlies of Pilgrim Creek: An Intimate Portrait of 399, the Most Famous Bear of Greater Yellowstone. A decade in the making, it was published in autumn 2015. Alongside text by this writer, the volume features 150 Mangelsen photographs of grizzly bear mother 399 and the bruin’s extended family — images gleaned from several hundred thousand frames.

Jane Goodall, Tom Brokaw, Ted Turner and Yvon Chouinard have praised it as a masterwork and capstone to his convention-defying career. For Mangelsen himself, it is a forceful declarative statement that wild places matter. And the best litmus test for gauging the health of wildness is assessing the well-being of creatures that need it in order to survive.

“In the Lower 48 states, literally in the backyard of this country, the persistence of grizzlies is something that we should celebrate — but their future is hardly secured,” Mangelsen says. “I hope Grizzlies of Pilgrim Creek will entertain and educate people about bear conservation, but I hope these pictures will help fire their own passion for making a difference.”

Born and raised in Grand Island, Nebraska, Mangelsen aspired to be a field biologist or game warden based upon his childhood explorations of the prairie. It’s what imprinted a yearning for expansive seeing.

In two separate years during the 1960s, he was crowned world goose-calling champion. Only after he convinced ecologist Paul Johnsgard at the University of Nebraska to take him on as a graduate student did Mangelsen demonstrate a gift for photography. Johnsgard handed Mangelsen a camera and told him that as part of a research project, he needed to document birds in flight.

Later, Mangelsen got his first inkling of possible public interest in wildlife photography prints when a man saw him carrying a waterfowl picture and offered to buy it. Eventually, he found his way to Jackson Hole and it has served as launchpad to photographing wildlife around the world. Along the way, he also produced an award-winning nature film about cranes.

Michael “Nick” Nichols, currently lead photographer for a National Geographic project exploring the Greater Yellowstone ecosystem, admires Mangelsen’s knack for identifying the spirit of creatures in the split seconds they are sometimes revealed, and doing it when physical conditions of landscape perfectly align.

“Here was a guy interested in wildlife biology who picked up a camera, fell in love with it, became an artist and found a way to do exactly what he wanted his whole life,” Nichols says. “For Tom, it is seeking simplicity, confronting variables that can’t be controlled. He courts his opportunities in a gentle, unobtrusive manner and yet his pictures have power and strength.”

Indeed, Mangelsen stalks moments, braving all kinds of conditions. One of his most memorable photographs, Catch of the Day, took years of contemplation. And though the image has been emulated dozens of times over by other shooters and seen by millions of people, when Mangelsen captured it — a spawning salmon flying through air in Katmai National Park right into the waiting mouth of a brown bear — his original accomplishment became a sensation and an artistic signature.

A few years later, while in the Arctic Circle trailing polar bears near Hudson Bay, Mangelsen braved a blizzard and bitter cold temperatures before a pair of snow-white bruins became the subjects in Polar Dance. The photo was highlighted by the International League of Conservation Photographers as one of the 40 most important nature images of all time. American Photo magazine has Mangelsen on its list of the 100 most important people in photography across all subjects. Mangelsen also has, in the past, been named Wildlife Photographer of the Year, bestowed by the Natural History Museum in London and BBC Wildlife magazine.

Legendary British primatologist Goodall remembers the outing when her close friendship with Mangelsen began. He invited her to look for wildlife in Yellowstone, coyly promising to show her a place vastly different than its Jellystone cartoon lampoon. “With Tom, on that memorable day, I met my first wild wolf and first grizzly bear — a male who crossed ahead of us so close I could almost have touched him,” Goodall says. “And then my first black bears, a mother with two cubs. Wild bison with remains of their winter coat hanging in untidy tatters. Herds of elk. A family of otters. And Tom had a deep understanding of them all. He predicted where they would go, why they did what they were doing. And he knew just where to go to get the perfect shot.”

Since then, Mangelsen has also taken Goodall to another of his favorite haunts — Denali National Park in Alaska. She notes, however, that her favorite respite — a break from her near nonstop travel schedule promoting conservation, especially to young people of high school and college age — is going every year to Mangelsen’s family retreat, a converted former one-room schoolhouse, The Cabin, set along the Platte River in Nebraska, to watch sandhill cranes. Hundreds of thousands of them.

Mangelsen has never lost the spirit of his childhood roots in Nebraska where humility was taught to be the highest virtue by his father, Harold, an entrepreneur who operated a family five-and-dime.

Although Mangelsen is considered a rock star of wildlife photography, he enjoys mentoring Millennials. At a recent Photography at the Summit workshop run by the great sports photography shooter Rich Clarkson, Mangelsen and Bob Allard — long the top photographer at National Geographic magazine — were in the field talking with students of all ages.

“One of them asked Bob, ‘What’s the secret to making money as a photographer?’ Another was wondering, ‘How do you brand yourself on social media?’ Bob looked at them incredulous,” Mangelsen says.

“Bob told them the purpose of the workshop and the focus of their energies should be on becoming the best photographer each of them can be, which is a combination of skill with a camera, insight and intuition, personal philosophy and the willingness to embrace adversity,” Mangelsen explains. “That’s exactly how I feel, too. Photography doesn’t make me feel cocky. The older I get the more humble it makes me — and that’s the thing about being out in nature is recognizing the significance of everything else around you.”

On the campus of the University of Nebraska, there is a position called the Buffett, Mangelsen, Sartore Chair of Photojournalism. It was created by Buffett, a conservationist, farmer and son of Warren Buffett, Mangelsen and Joel Sartore, a longtime photographer for National Geographic. Sartore says Mangelsen’s work was the first he studied intensely. “He could take pictures not thought possible. He was able to get the perfect scene. To me, it was just magic. He’s really the American master of wildlife photography.”

With eight locations across the United States, Mangelsen’s Images of Nature Galleries are a case study in how savvy marketing has popularized nature photography. Photographers also point to Mangelsen as evidence that photography resonates strongly with young people not attracted to traditional paintings and desirous of more contemporary visuals to decorate their homes.

William Kerr, one of the cofounders of the National Museum of Wildlife Art, and known for amassing a spectacular collection of paintings and sculpture, says Mangelsen’s photographs hold exalted status, right up there with fine art masters. When the museum in 2010 staged a major retrospective of Mangelsen’s portfolio, it was among the most popular ever. “Few living photographers are worthy of sharing company with that kind of time-tested talent in the museum collection,” Kerr says. “Tom is an artist who happens to use a camera instead of a palette or chisel. He’s like painter Bob Kuhn, who saw the things none of the rest of us did, and he invites us in, saying ‘Nature’s beauty is vaster than you realize. Come on a journey with me.’”

From grizzly 399’s den on the flanks of Pilgrim Creek to the middle of the dell of Jackson Hole, Mangelsen’s tribute to an extended bear family reads visually like a revelation. He worries about the effects of climate change and the impacts that rising human population are bringing to ever-shrinking wild country. He doesn’t want his corpus to be a eulogy but a source for rallying to nature’s defense and holding it in the human heart.

“When we’re out there, we have a brief moment of access that opens up, and within the big picture of geologic time, a mere nanosecond to register an impact. We want our pictures to matter and we see things nobody else does,” Nichols says of his friend.

“Tom, more and more, is playing the role of activist, and I’m right there with him. If you show the world how sentient these creatures are, I’m convinced you can move the dial of human understanding, and that’s the only way any of these challenges are going to be confronted.”

EDITOR’S NOTE: Autographed copies of Mangelsen’s new book Grizzlies of Pilgrim Creek: An Intimate Portrait of 399, the Most Famous Bear of Greater Yellowstone are available at www.mangelsen.com/grizzly. 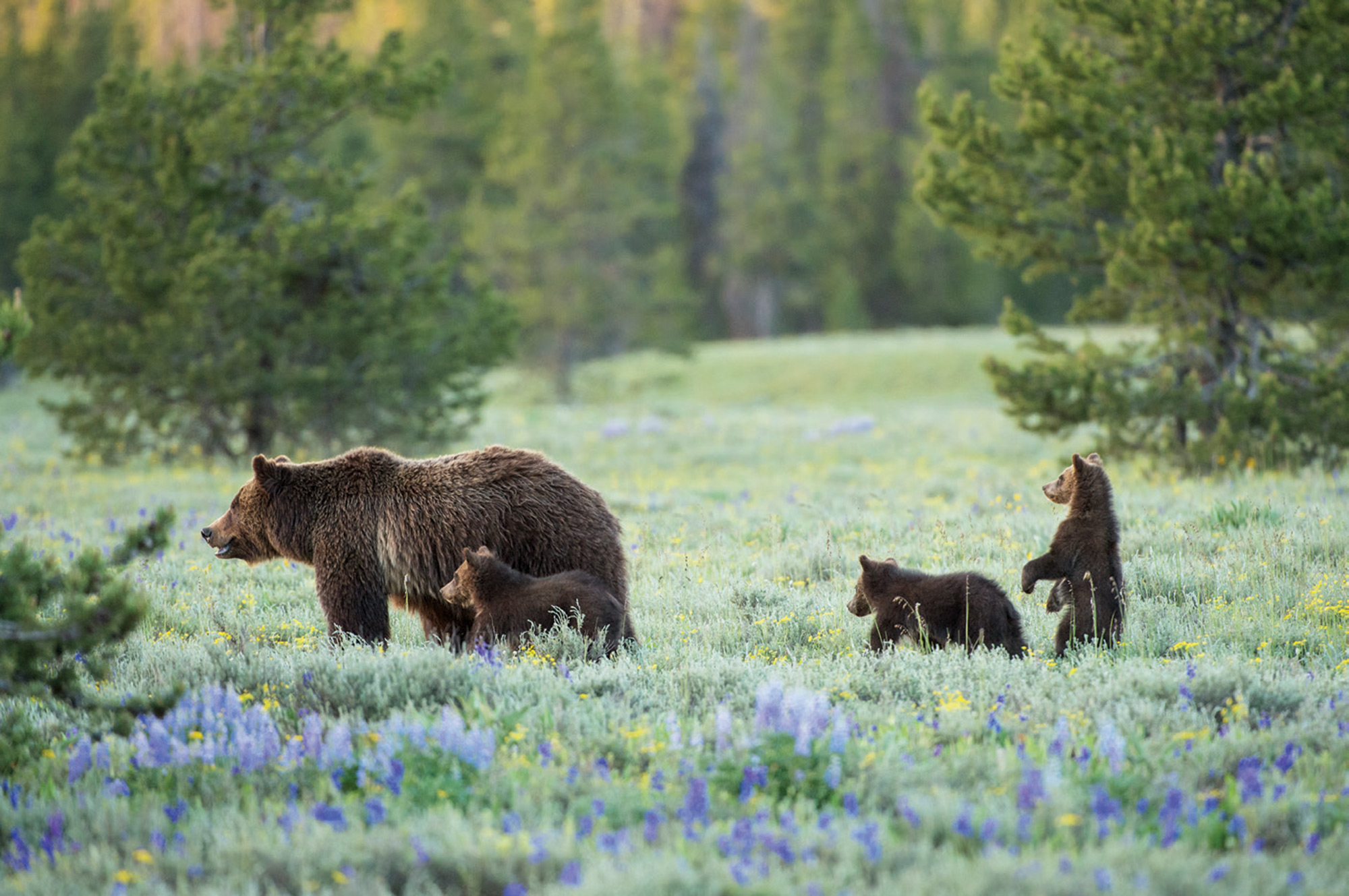 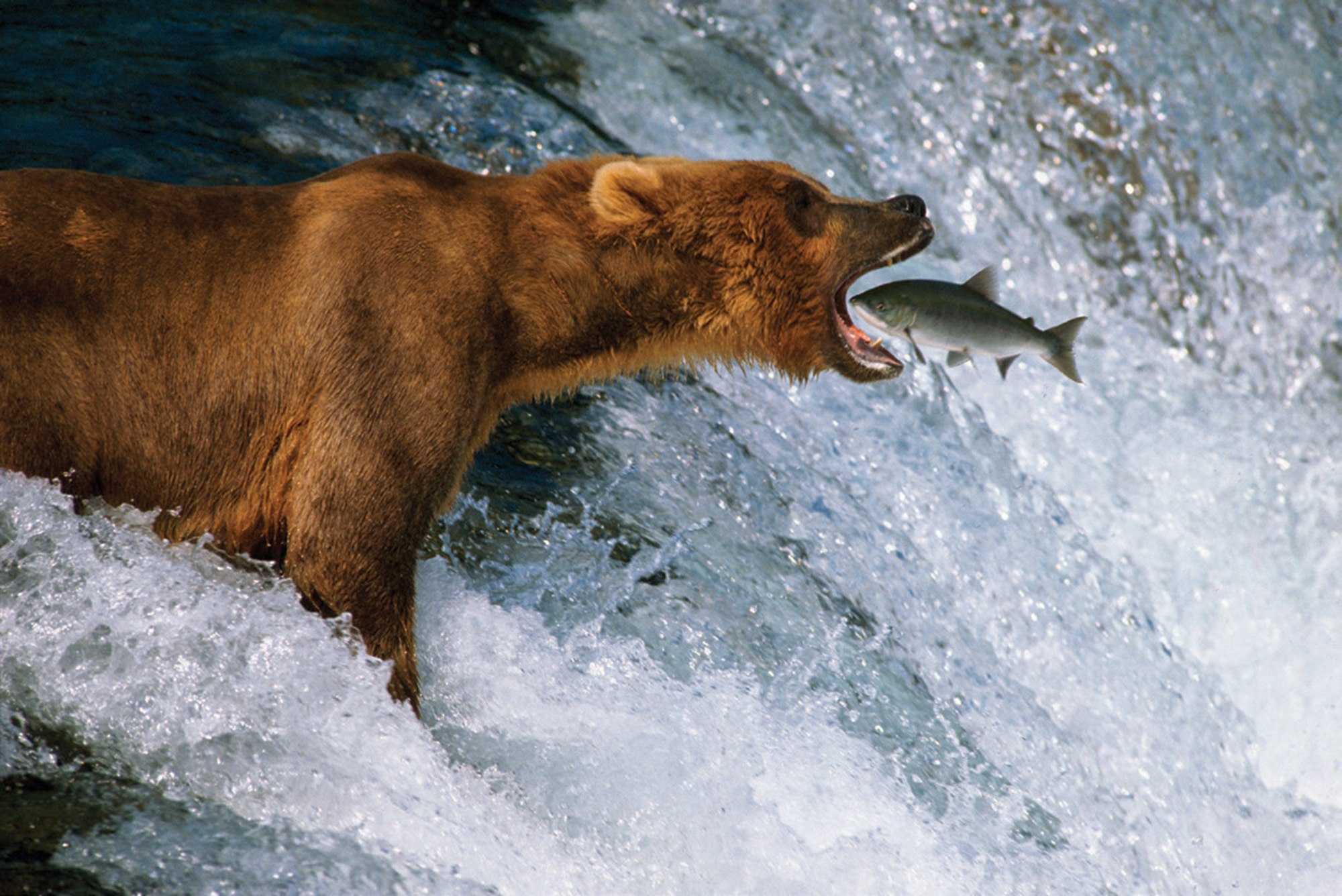 “Catch of the Day” 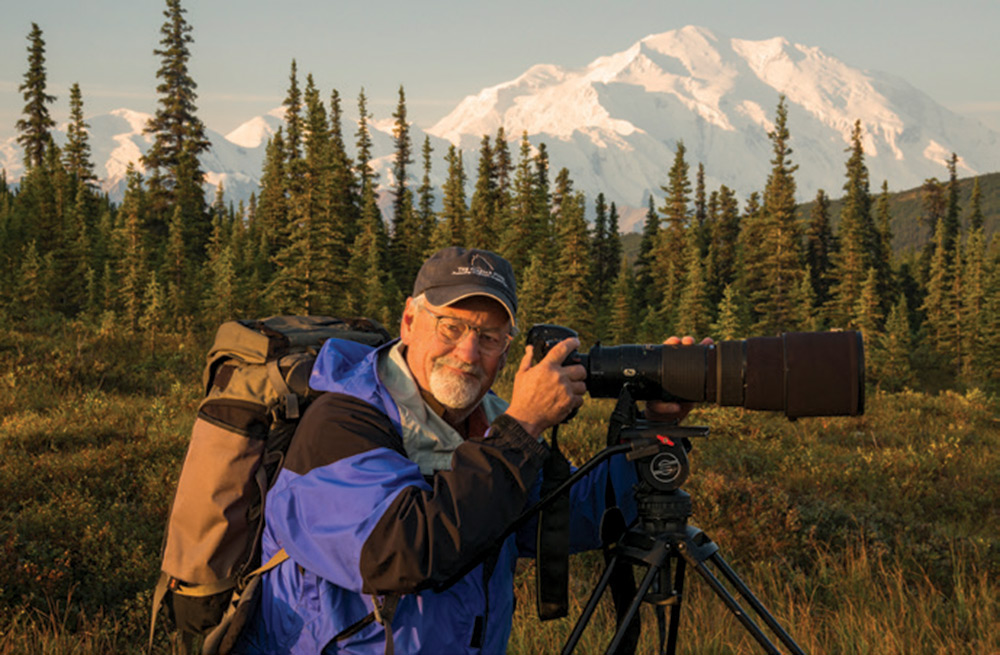 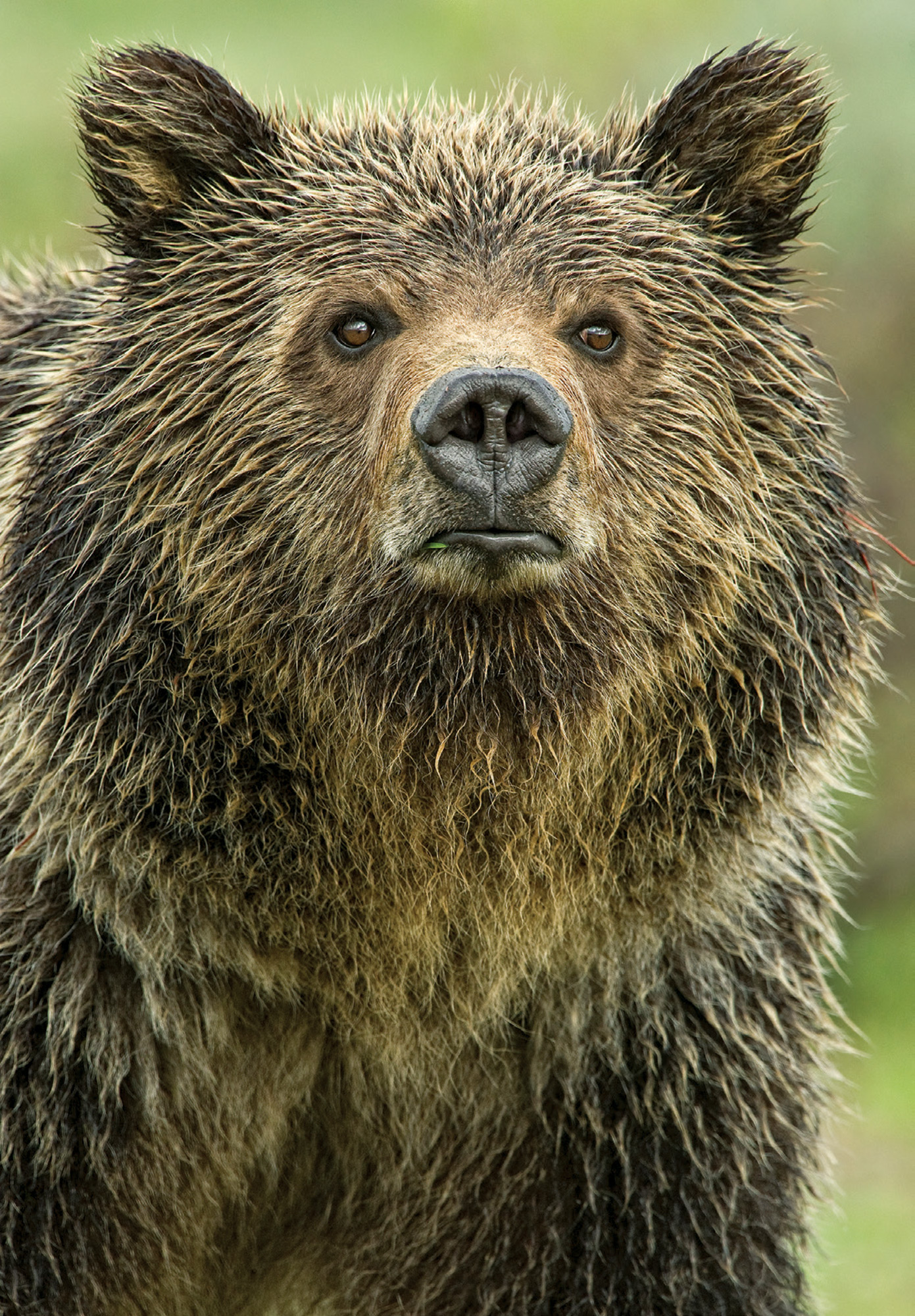 “Eyes of the Grizzly” 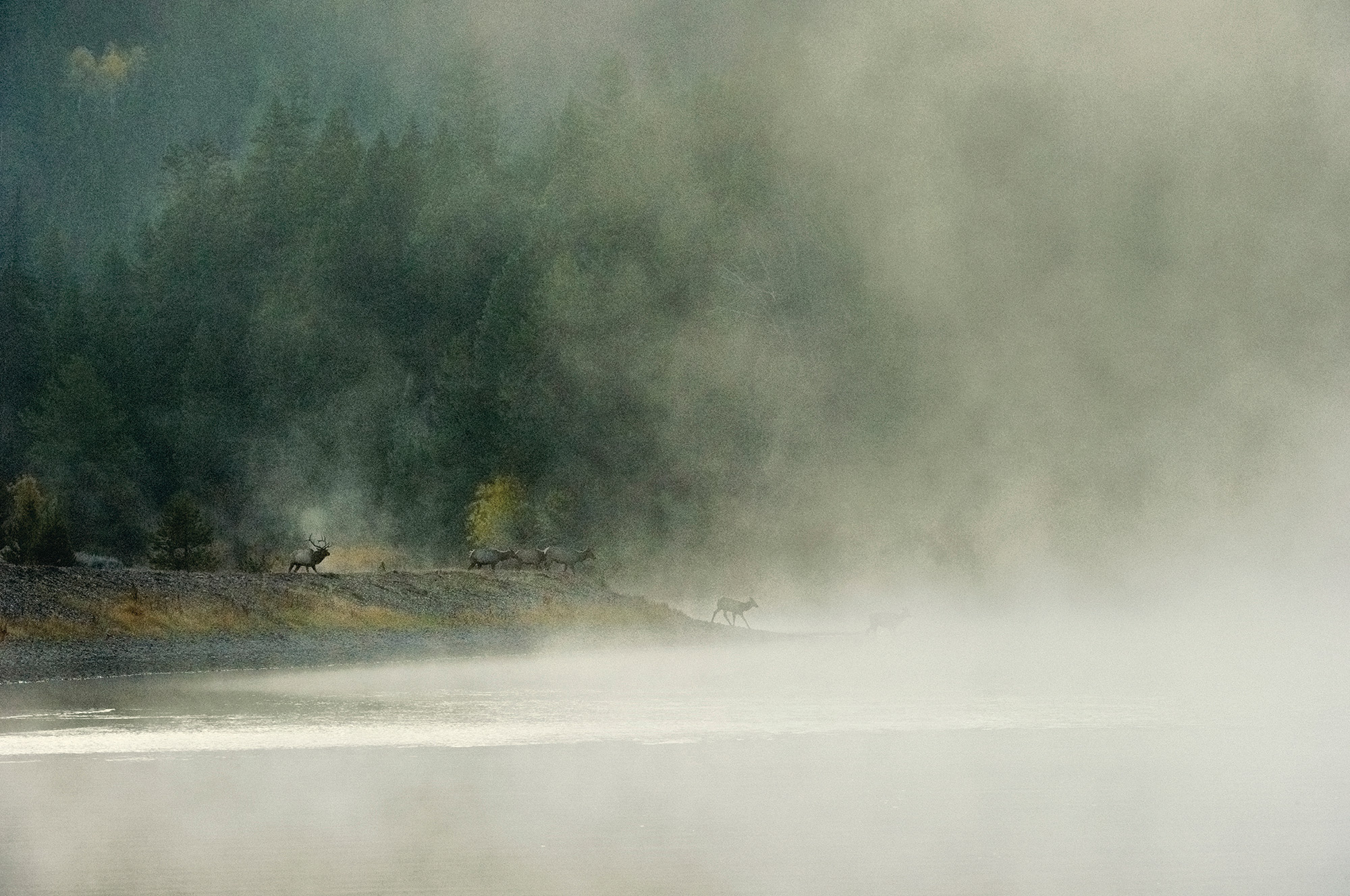 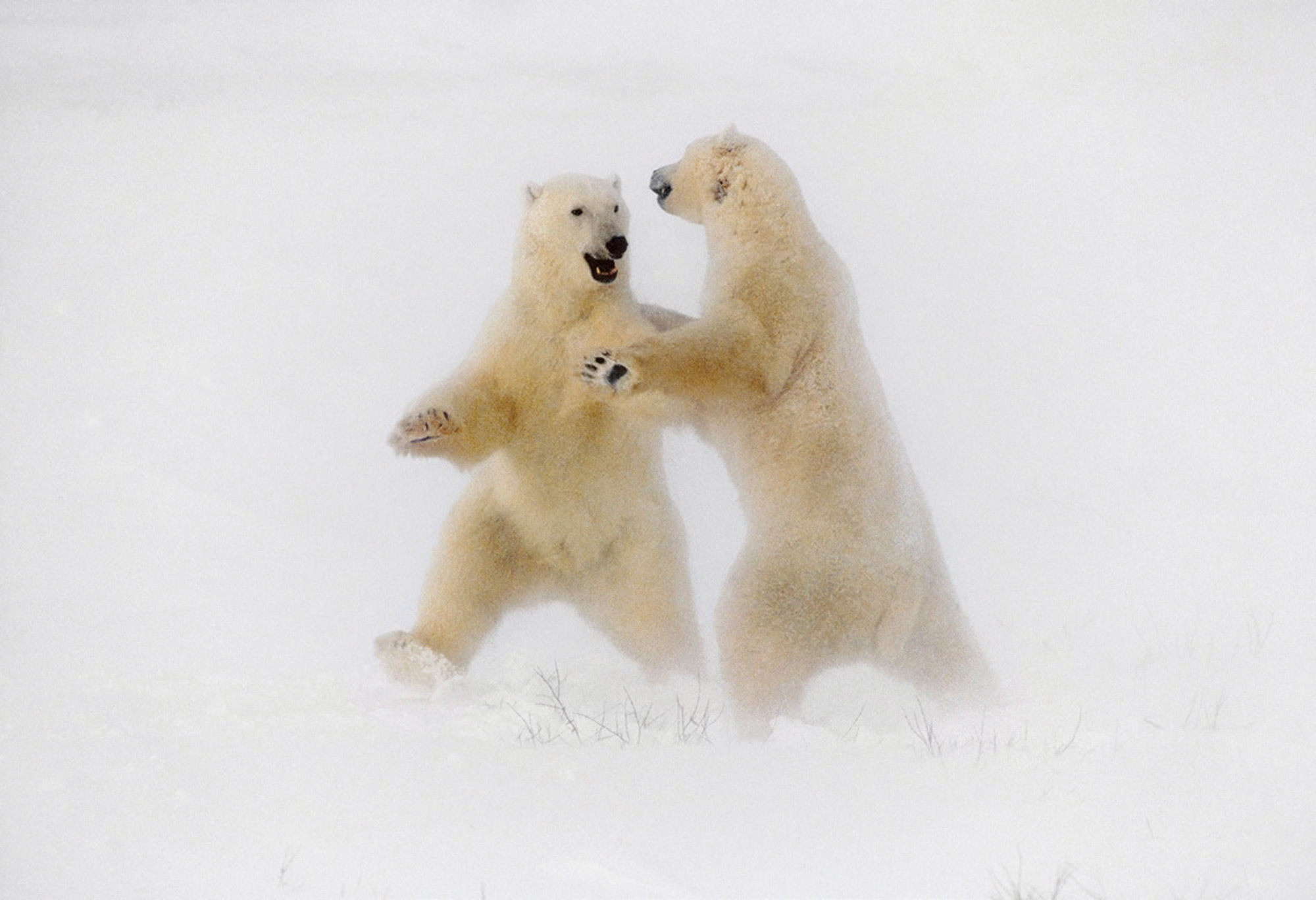 “Cranes of the Grey Wind”