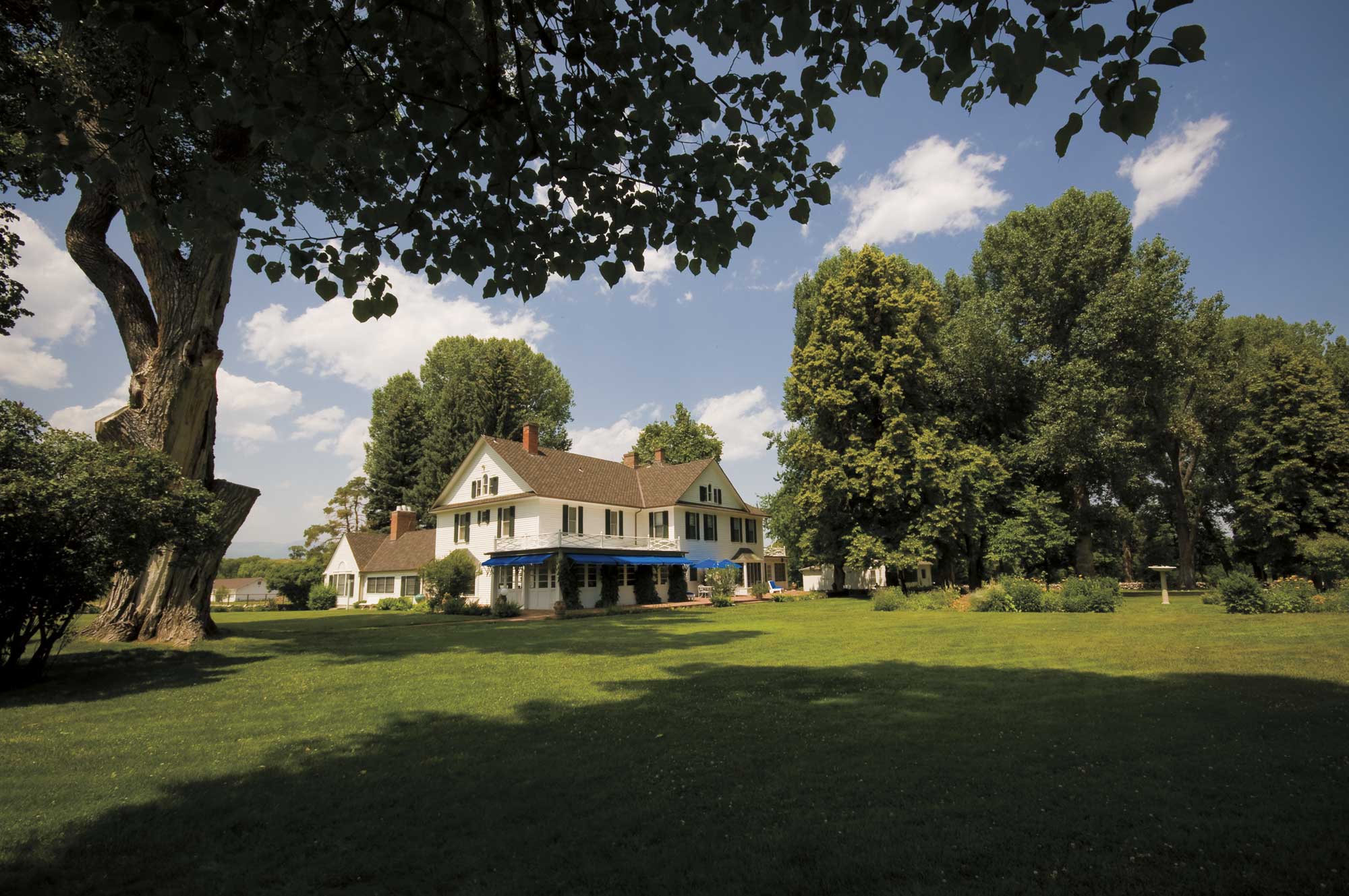 The Ranch serves as a living museum and houses many exhibits in the outbuildings and farm structures.

30 May The Bradford Brinton Memorial & Museum

IN A SLEEPY CORNER OF THE WEST, THE QUARTER CIRCLE A stretches gracefully along the foothills of the Bighorn Mountains. A working ranch typically is not the kind of place to find a legacy of valuable fine art, but this rural property keeps a significant collection in a near-original setting.

The Bradford Brinton Memorial & Museum is an exquisite gem hidden behind a discreet, traditional three-post ranch entrance just outside of Big Horn, Wyoming. A winding dirt road leads to the ranch compound; museum and gallery sit creekside in a grove of towering pine and cottonwood trees. Crisp, white historic buildings dot the delicately manicured grounds, making the landmark an oasis in the midst of vast arid pastures and rangeland.

The unusual museum exists today thanks to a lifetime of collecting and a pact between two siblings to preserve a gentleman’s ranch, according to Ken Schuster, the museum’s director and chief curator. Bradford Brinton came West from Illinois in the early 20th century to vacation in the mountains, and it was in 1923, on one of his annual trips, that he purchased the Quarter Circle A and began his lifelong passion for Western art and artifacts. Brinton’s sister, Helen, frequented the ranch as well. They shared a similar vision for the future of the property and a commitment that it would be a source of education and enjoyment for the public after their deaths.

Bradford Brinton’s exceptional love of the West and of Native American culture led him to acquire pieces at a time when collecting Indian art was not yet in vogue; his extensive assemblage includes rugs, baskets, clothing and beadwork. “Instead of buying postcards, he bought artifacts in a day when what he was purchasing was not thought of as great art. He had a good eye and was very astute,” Schuster explains. “He purchased a bit of everything, but bought predominantly from the Lakota tribe.”

While Bradford is known primarily as the purchaser, his sister, Helen, is thought of as the preserver. She was the steward, keeping the collection together after her brother’s death in 1936. Helen inherited the ranch and everything in it. The many things that Bradford had moved from the West to his New York apartment, she bought from the estate to return to the ranch. Honoring the agreement she had made with her brother, Helen’s will specified and defined how the ranch would become a public institution. “Helen had specific ideas of how the art should be displayed,” explains Winifred Galloway, curatorial assistant at the museum.

The stately main ranch house, dating to 1892, was renovated and enlarged in 1927 with the help of New York architect Prentice Sanger. It now keeps the Brintons’ personal memorabilia, art and furniture arranged much as it was in 1960 when Helen died and the premises became public. Inside the pristine ranch home, the collection goes beyond traditional paintings and sculpture. Dioramas, rare books and manuscripts, Native American artifacts, saddles and spurs, sporting rifles and game journals abound along with Tiffany lamps and flatware, Wedgwood china and European antiques. The house is full of names that defined Western history: Remington, Russell, Borein, Gollings and F.T. Johnson.

Brinton, who had an affinity for first-edition books and rare manuscripts, kept an office and library in the house which is maintained to this day as it was when he was alive. The library, described by Galloway as “classic Brinton,” displays a stunning commissioned E.W. Gollings oil painting, Wrangling Horses on the Quarter Circle A, of the view from Brinton’s desk in 1924.

There are several commissioned works at the ranch including a Hans Kleiber oil of Brinton’s formal flower gardens. When Ken Schuster joined the Museum in 1990, the gardens that Kleiber painted were gone, so using the painting as reference, he had them rebuilt and planted. During the renovations, Edward Borein, who frequented the neighboring Gallatin Ranch, painted an elaborate frieze in the living room.

All of the quirks that come with having an art collection displayed as part of someone’s home are readily present throughout the grounds. Brinton had hand-painted watercolor wallpaper shipped from New York, and on the lower right corner of the wall someone wrote “PAT” prominently in ink. Since Brinton had a daughter named Pat, it could have been a childish antic, but Schuster thinks otherwise. “Brinton and Borein were always pulling each other’s legs. Brinton gave Borein a dog whom he named “Pat,” and in the letters between the two, there was always banter about the dog. I think it was Borein who made the mark as a joke.”

There is much more to discover about the Brintons and the Quarter Circle A beyond the walls of the main house. There are various outbuildings and a quaint lodge Brinton dubbed “The Whoopie Cabin” where he and his friends would hang out, play cards and have a good time. The Reception Gallery, built in 1965, exhibits many of the artifacts that were in the house, or in storage. Many of these artifacts were deteriorating by the usual ranch suspects, mice, moths and sunshine, until they were restored and moved to safer grounds in the Reception Gallery. The building also houses a gallery of contemporary artists, a gift shop and modern bathrooms (so that visitors wouldn’t have to use the facilities in the ice house). Two times a year the exhibit changes in the main gallery space, and the shows change monthly in the smaller attached gallery.

Bob Barlow, a plein air artist who has exhibited in the gallery at the museum from the early years, says, “It’s a beautiful museum, a small collection, but an incredible place. He [Brinton] had a fabulous eye. It’s such an exquisite collection and you just don’t see that sort of thing, but that’s the beauty of Big Horn. It’s had a history of collectors living in the area and it still does. It’s always been that way.”

Indeed, the Quarter Circle A offers a fascinating glimpse into the life of a dedicated personal collector and a taste of authentic Western personality.

EDITOR’S NOTE: The museum is open daily from Memorial Day weekend through Labor Day, Monday through Saturday, 10 a.m. to 4 p.m., and Sundays from noon to 4 p.m. The 2009 summer exhibition, Special Treasures of the Brinton, commences May 23 and runs through September 7. For more information about upcoming exhibitions, visit www.bradfordbrintonmemorial.com or call 307.672.3173.

Brinton’s residence at the Quarter Circle A Ranch now serves as a museum. 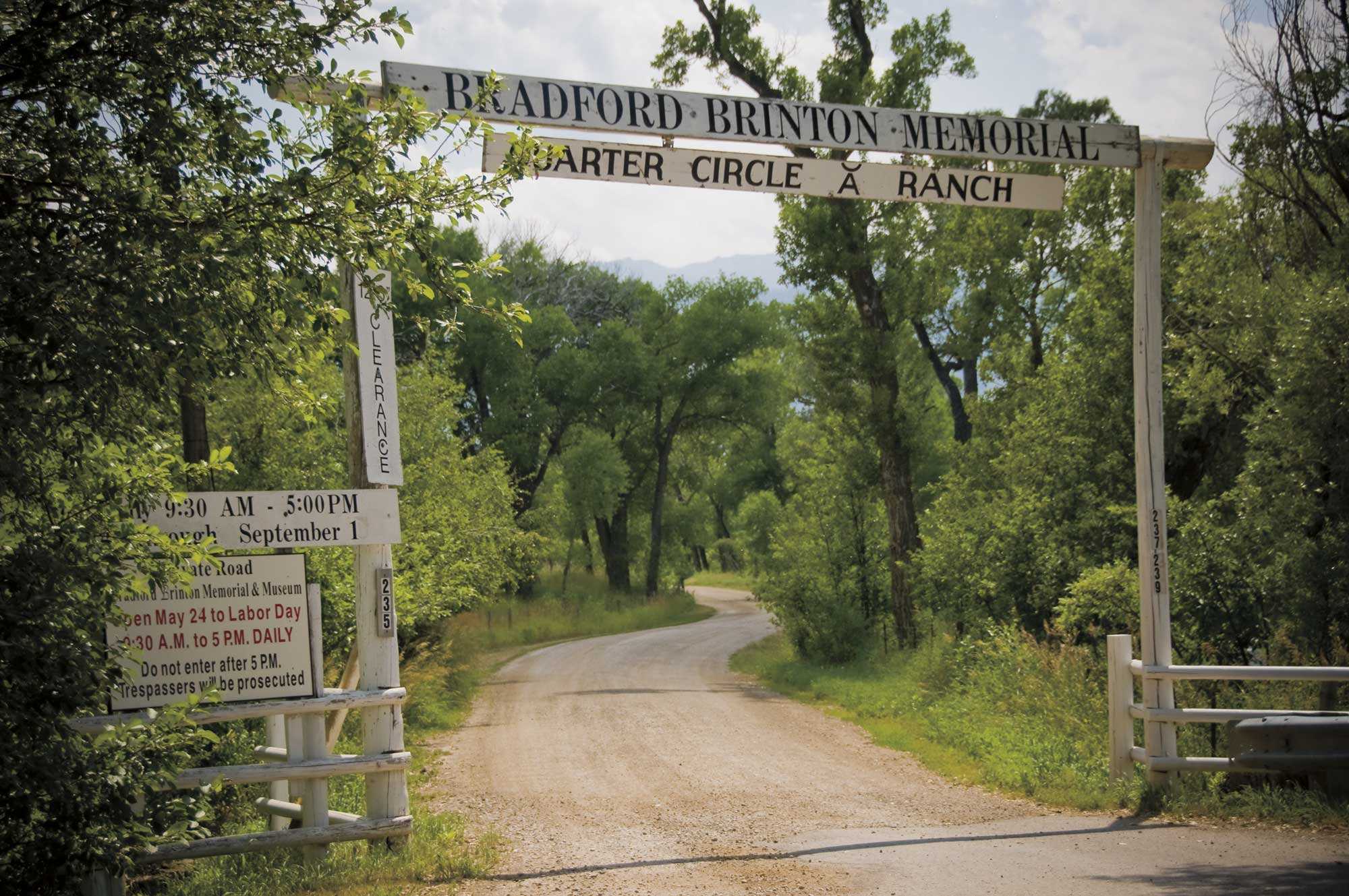 The entrance to the Quarter Circle A winds gracefully to the Memorial & Museum. 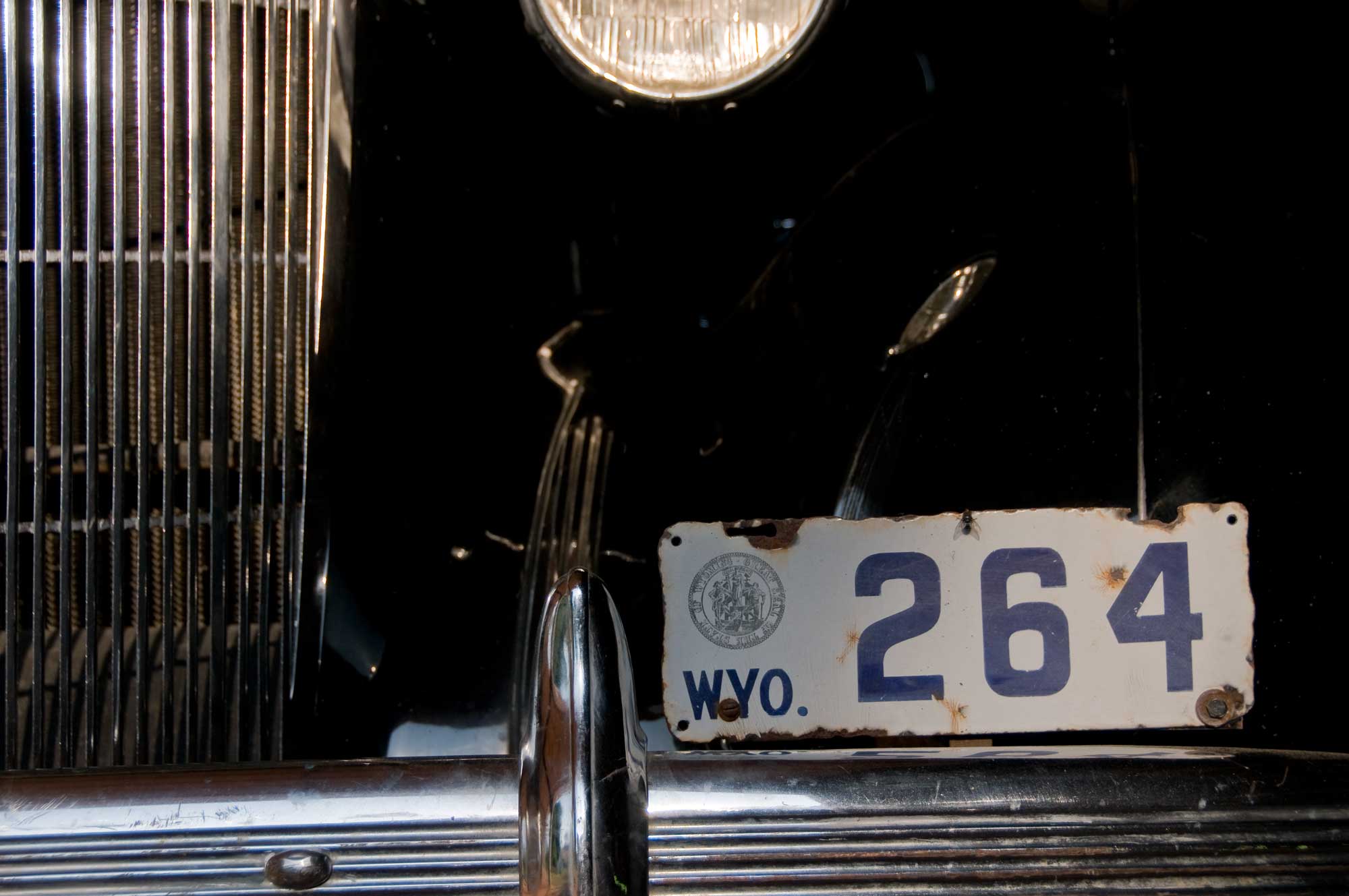 Brinton’s original car and truck collection are displayed as part of the living museum. 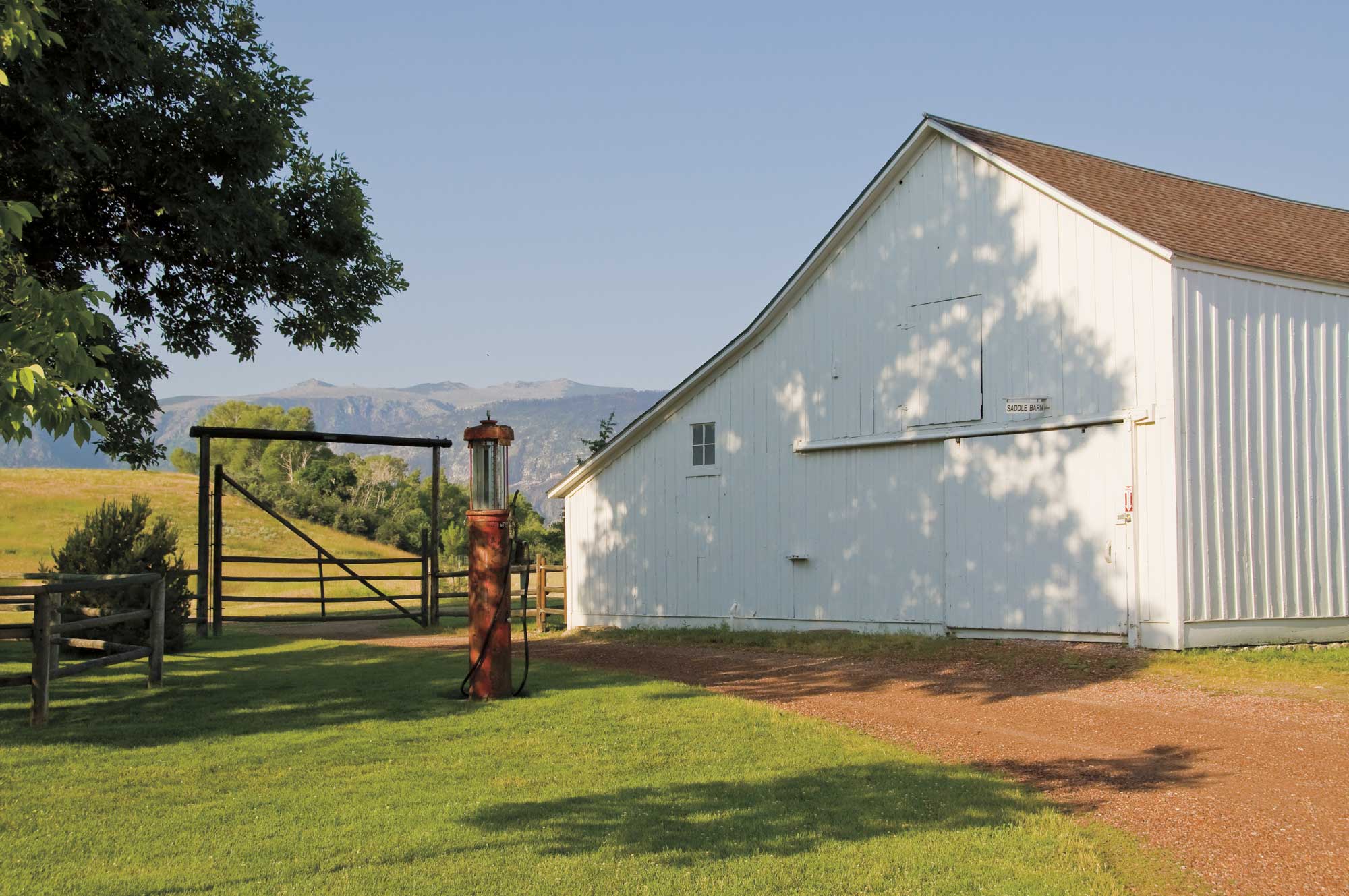 The Quarter Circle A ranch barn and Bighorn Mountains. 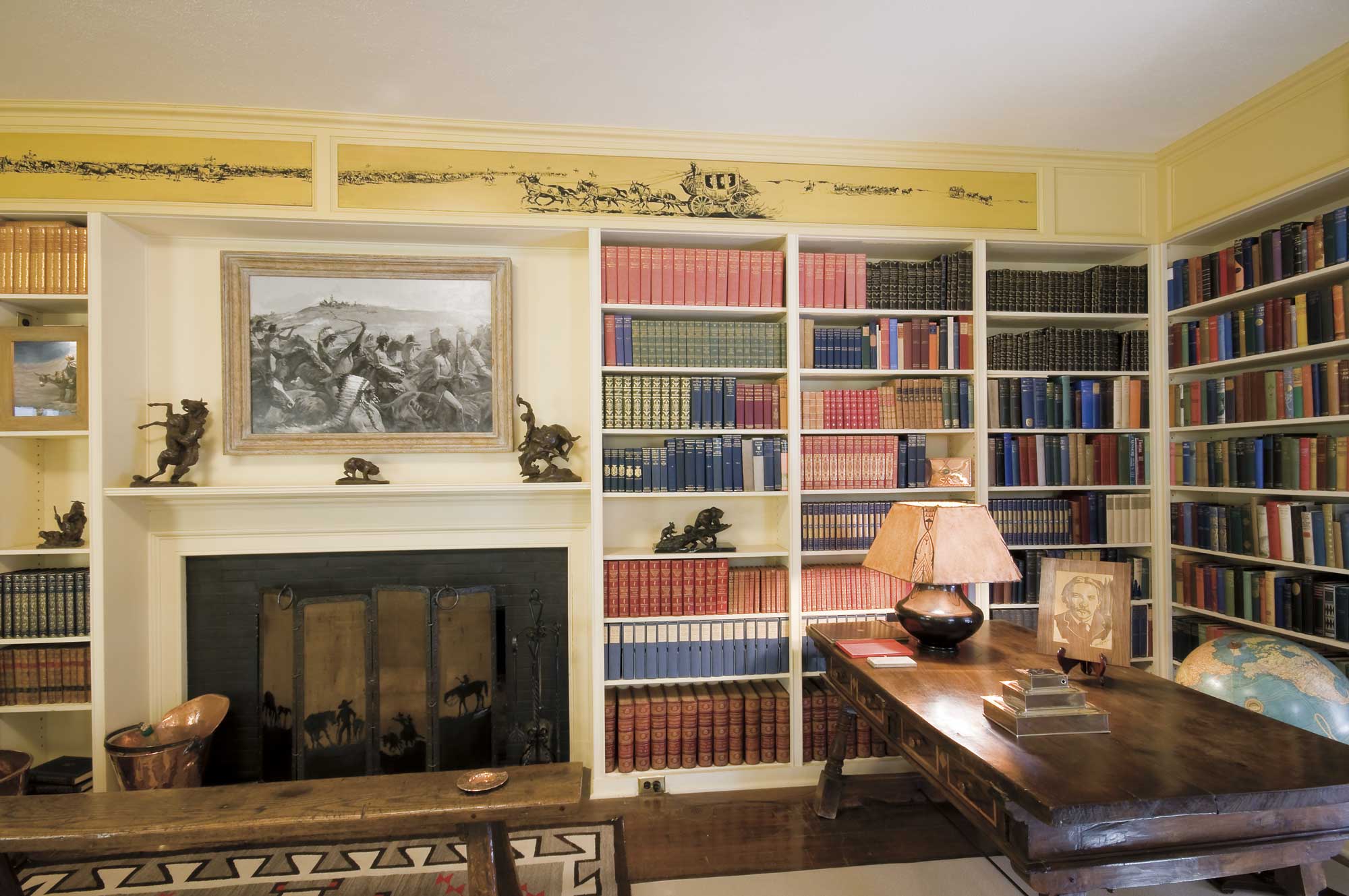 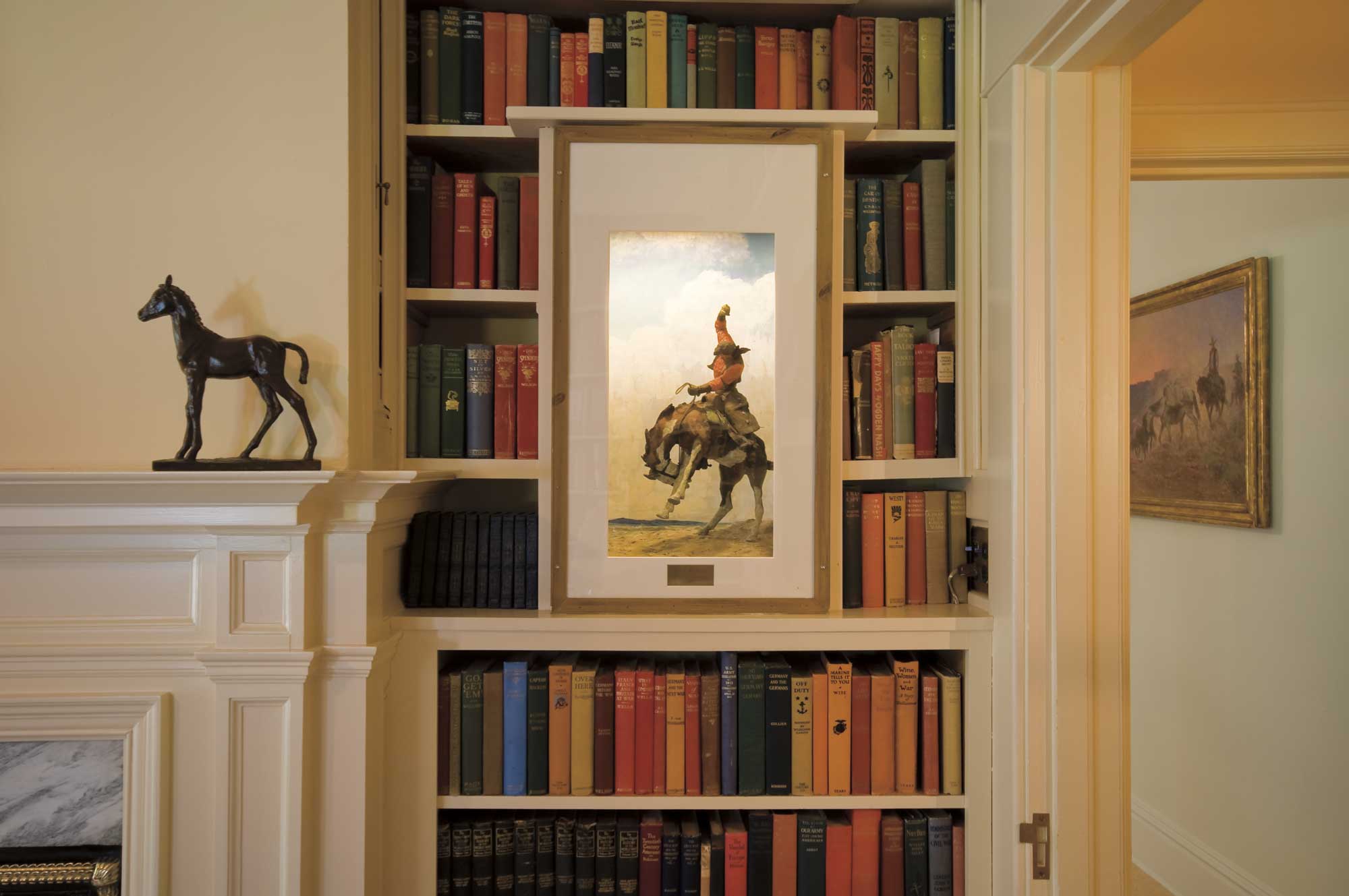 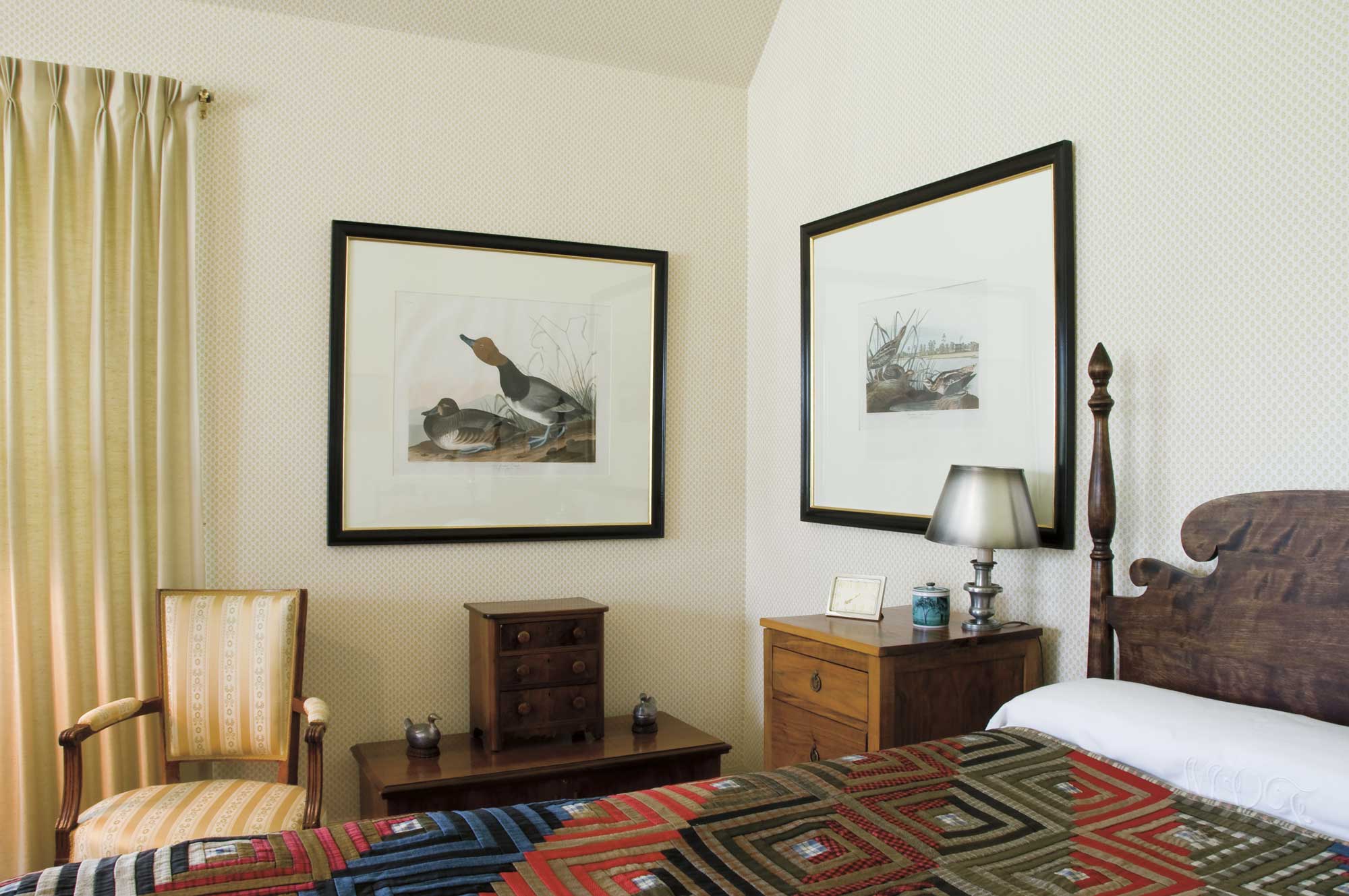 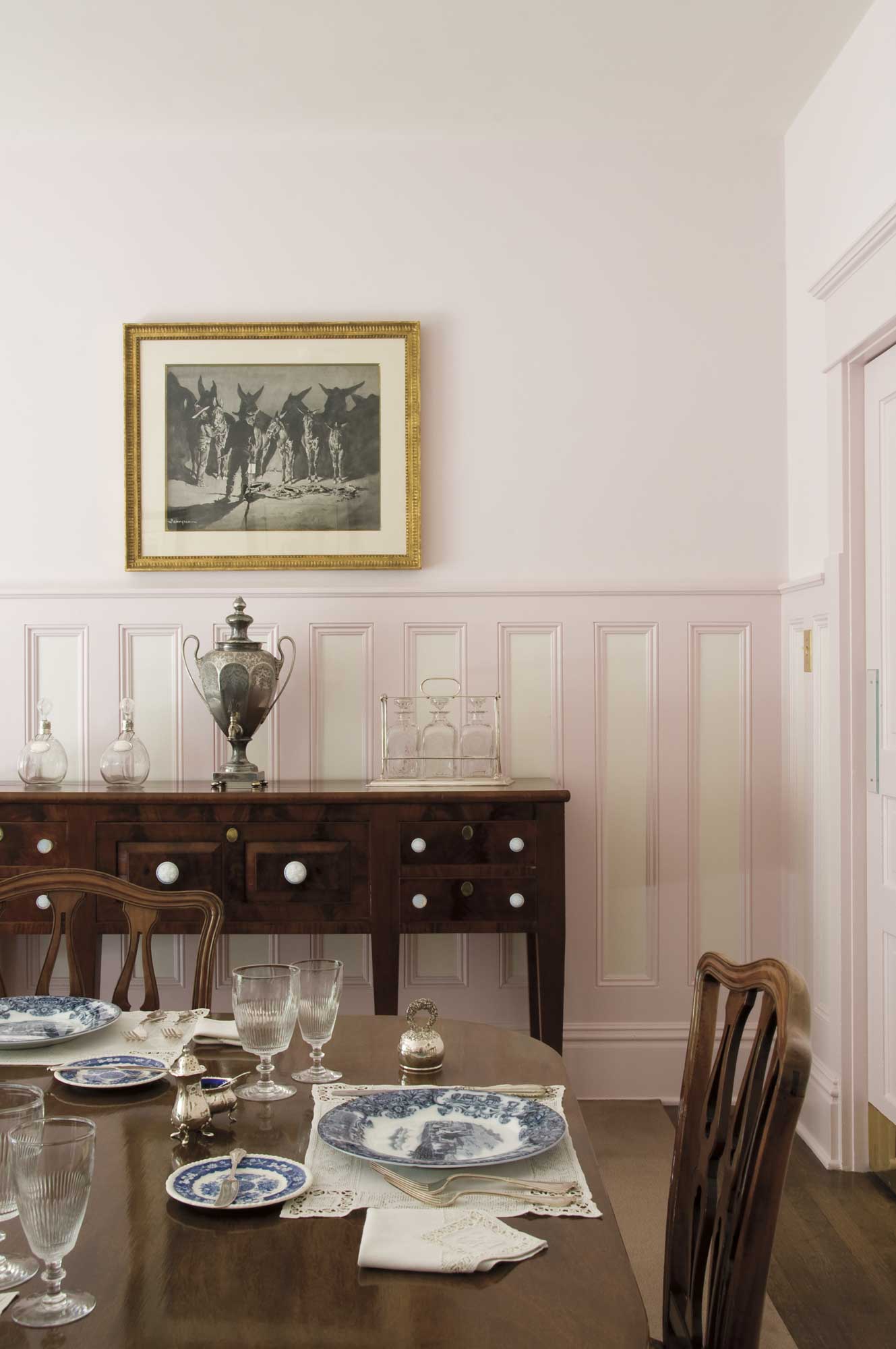 The dining room is filled with Wedgewood china, Tiffany flatware and Remington paintings. 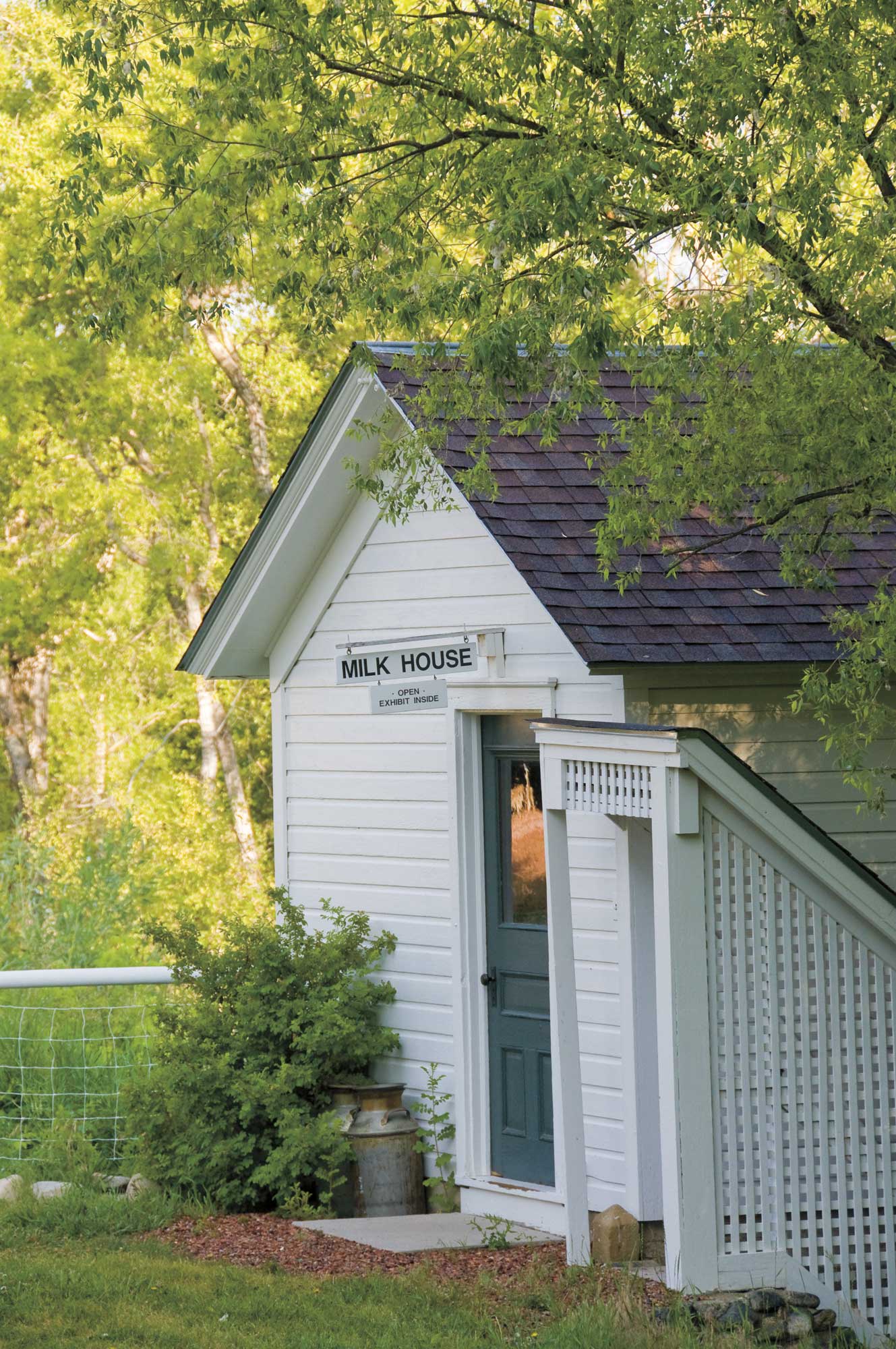 The milk house and other outbuildings feature a glimpse into the ranch’s way of life in the early 20th century. 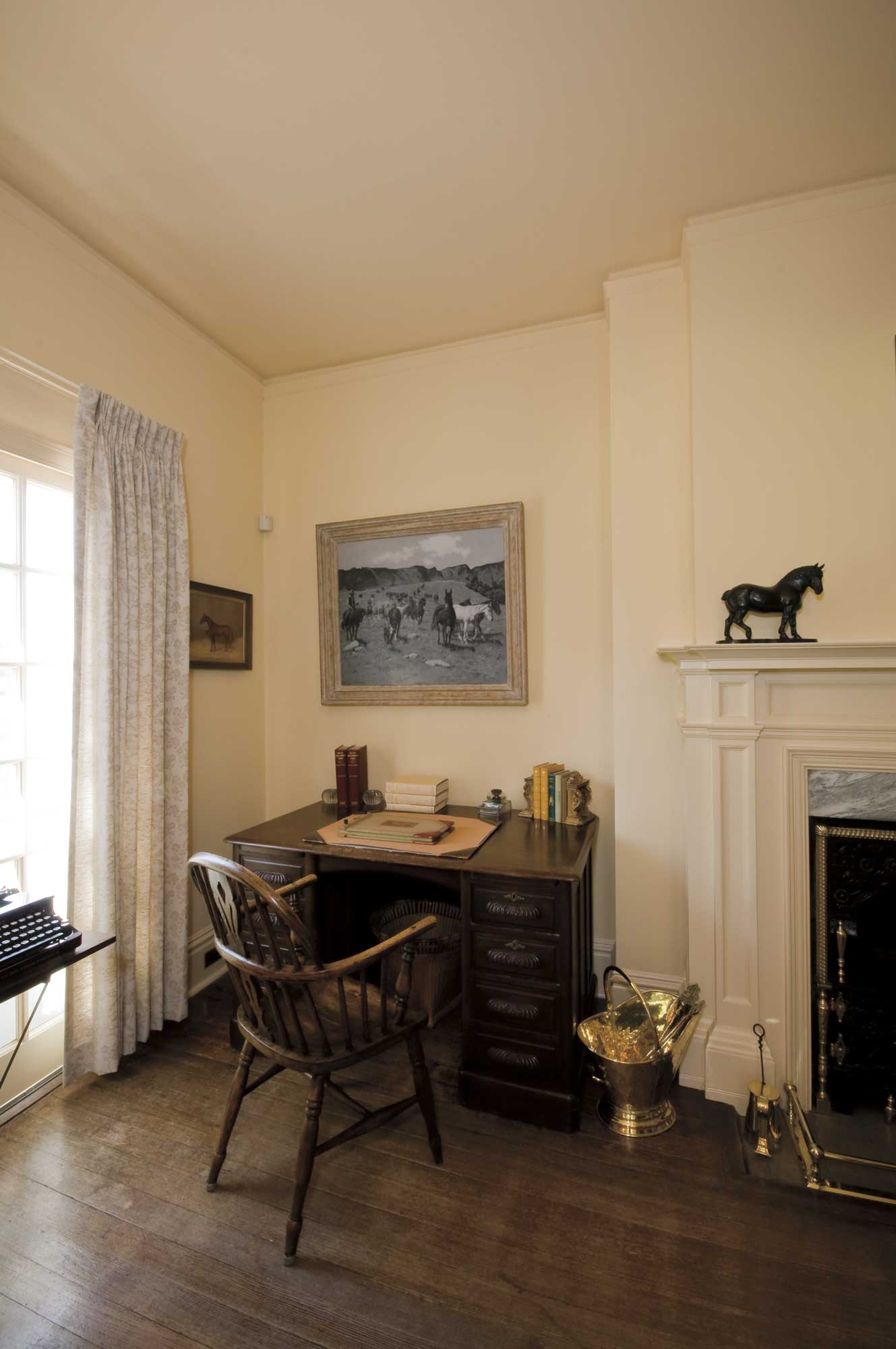 Brinton’s office is maintained to this day as it was when he was alive. 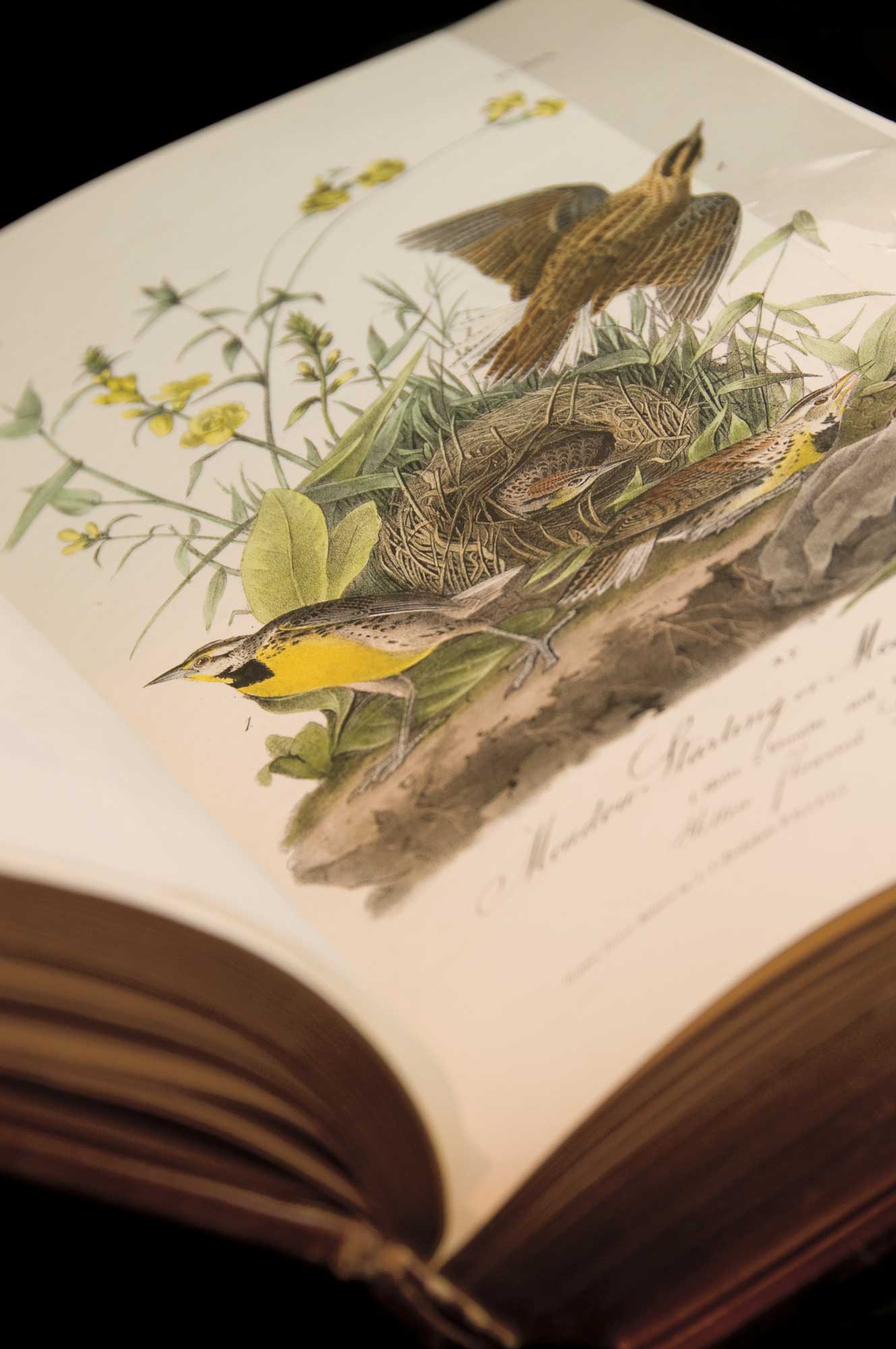 The museum collection includes many rare books and manuscripts. 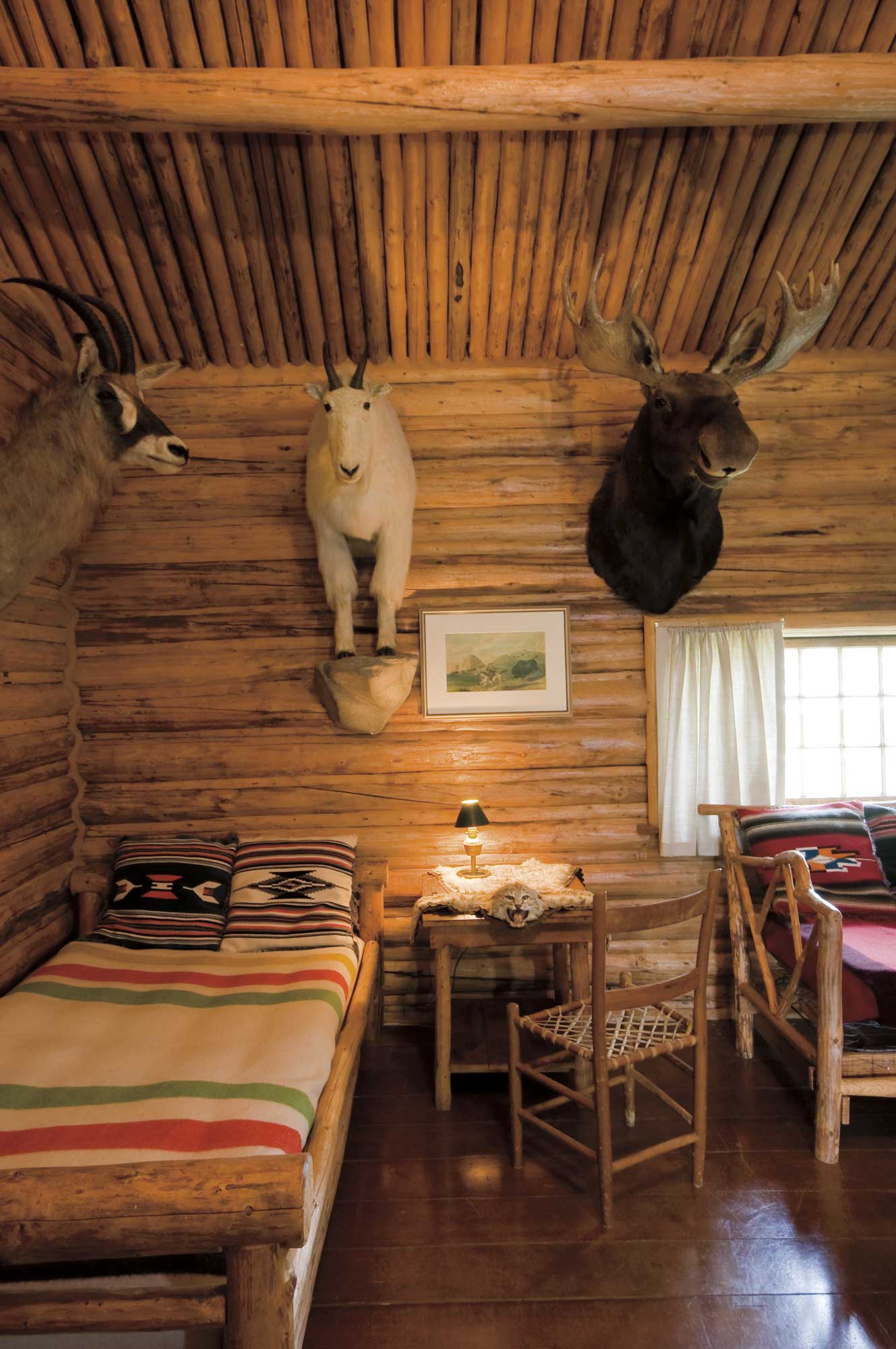 Brinton’s “Whoopie Cabin” was used regularly for gaming and gatherings.