04 Aug The Contemporary West in Harmony

THE BLESSINGS' ART STUDIO IS RARELY QUIET. As two visual artists who began their creative pursuits as musicians, there is usually music playing — sometimes opera, other times jazz or bluegrass. Most genres, in fact, mix with conversation over the invading smell of linseed oil.

“The parallels between these two artistic forms are just everywhere and I see new ones all the time,” says Michael Blessing, explaining that he can mix up a color harmony and create the same mood on canvas as he can in song. The light and dark compositional elements become the sharps and flats. Quick bursts of color strike the canvas, eliciting emotion like staccato notes. And backgrounds become subdued, playing supporting roles while subjects sing.

“When you are really good at [music], you are no longer translating the language of notes and keys, it’s just patterns,” Meagan Abra Blessing says. “It changes from a musical performance to a visual language and the patterns are recognizable.”

Their home studio is tucked into a hillside along a road that parallels the ridge of the Bridger Mountains in Bozeman, Montana. As self-taught oil painters, the Blessings draw inspiration from their surroundings, choosing to paint subjects that resonate with their experiences of rural Montana and the West.

Michael’s work references classic Americana. Using bold color and sharp lines, his subjects often appear against rhythmic, abstract backgrounds. Compelled by shape, color and strong composition, he paints mostly figurative work and images of Western nostalgia, such as his series of neon signs, which garnered significant recognition during the 2014 and 2015 Western Art Week at the C.M. Russell Museum. Waterin’ Hole, an oil painting of a neon cowboy astride a bucking bronc above a Mint Bar sign, provoked a bidding war during the First Strike auction. The work realized $16,000, far above its estimate of $2,200 to $3,200 and was the highest bid that evening. This year, Raising the Bar sold for $17,500, the highest bid during the Art In Action quick-finish event, and Postcard from Miles City sold for $8,000 during First Strike, an experience that Michael gratefully describes as shocking, exhilarating and as if lightning had struck twice.

His recent work carries the neon sign imagery one step further, combining a style that’s sold well for the last two years with his first love of painting the figure. Spaghetti Western and musical legends are electrified with neon outlines in an almost Pop art portrayal. The figures stand in iconic postures, a muted background emphasizes the flash of neon.

While bright tones replicate strong notes and subtle hues play supporting roles in Michael’s work, the color and composition are broken down into individual elements and mimic performance for Meagan. “I love opera and I was in some operas in school. I’m a ham. I’m extroverted. I’m an unusual visual artist. I started out in performing arts, and I still like to do that [with my work],” she says.

Meagan also participated in the 2014 and 2015 First Strike auction, and in the 2015 Art In Action, selling each of the three works she exhibited at The Russell for their estimated value of between $2,500 to $5,000.

Meagan is drawn to high contrast and movement when choosing her subjects. Her bright, expressionistic works often depict classic Western imagery, such as landscapes and horses. With a vivid palette, she works to capture the individual personalities of her subjects. “Because [I paint] a lot of traditional Western subjects, I make an effort not to do them in a traditional manner,” she says. “With my work I have no sound and I have no movement, so how can I bring the feeling of sound and movement and happening into what I am painting? That is the stuff I am drawn to.”

Duane Braaten, special projects art coordinator at The Russell, says Western Art Week offers an eagerly anticipated catalogue of works. “Through their active participation in our fundraising sales events, Meagan and Michael have quickly established themselves as recognizable talents with our audience,” Braaten says, an exceptional feat, given that 2014 was the first year both artists participated in Western Art Week.

The creative duo started painting in 2002, before they met one another. Meagan was challenged by a friend to recreate a still life she had admired, and within two years she was accepting commissions. Michael, meanwhile, had set aside two months to produce an album with singer-songwriter Jenn Adams and when a last-minute cancellation left free time, he felt compelled to sit down and draw, a turning point that demanded his attention.

“I just couldn’t ignore it; and I was captivated, literally, eight to 10 hours would go by and I wouldn’t be eating. I was just totally ensconced in the activity of doing it,” he says.

Michael was raised in the sparse town of Roundup, Montana, among a conglomerate of machinery and neighbors who survived on rural traditions. As a boy, he remembers traveling with his family and seeing the ubiquitous neon signs that hung above every Western storefront, vying for consumer attention in small towns reliant on tourism. Initially, he began painting neon for the color, finding the glowing orange, yellows and pinks mesmerizing, especially during early morning or evening when the atmospheric light competed for attention. He often recreates this golden hour, presenting the neon in a dusk or dawn setting, and he finds the disappearance and modern-day effort to preserve neon an interesting and perhaps underdocumented aspect of Western history.

Prior to pursing art full time, Michael was a professional musician for 30 years, working on Grammy-nominated albums and managing two recording studios in Bozeman. It was a passion that began early on with the clarinet and evolved into percussion, guitar and trombone in high school, and eventually led to pursuing a master’s degree in music arts.

Born in Germany and raised in Seattle, Washington, Meagan spent her formative years living and working in various Western states, from Alaska to Colorado. She pursued bachelor’s degrees in equestrian studies and vocal performance and spent nearly 20 years teaching, training and periodically performing. She moved to Montana in 2001, solidifying her love of wide open spaces. “There is something associated with this region that just makes me relax a little bit, and that is a really good space to be in when you are trying to make something beautiful,” she says.

At age 12, she had the option of training as an Olympic figure skater. When her parents decided this was a little too early to leave home, she took up Western equitation. “I love horses and I understand them really well. There’s just something comforting about going to the barn — the way they smell and how they interact with you. I was a horse-crazy girl and I just never outgrew it,” she says. She also played the trumpet, French horn and piano in high school and participated in a variety of musical groups.

The couple met in 2005 when Meagan’s oldest son took drum lessons from Michael in Bozeman. They began dating in 2009 and now live with their blended family of six children in Bridger Canyon.

“There are challenges everywhere, but we bounce everything off of one another pretty much, just so we know we have given the best answer to a question of how to make the best image on canvas,” Michael says.

The couple will continue to approach art from a place of thoughtful, focused practice, painting images of the contemporary West side by side, seeking counsel on how to improve a composition or to know when a work is finished.

“We are blessed that way,” Meagan says. “We are best friends.” 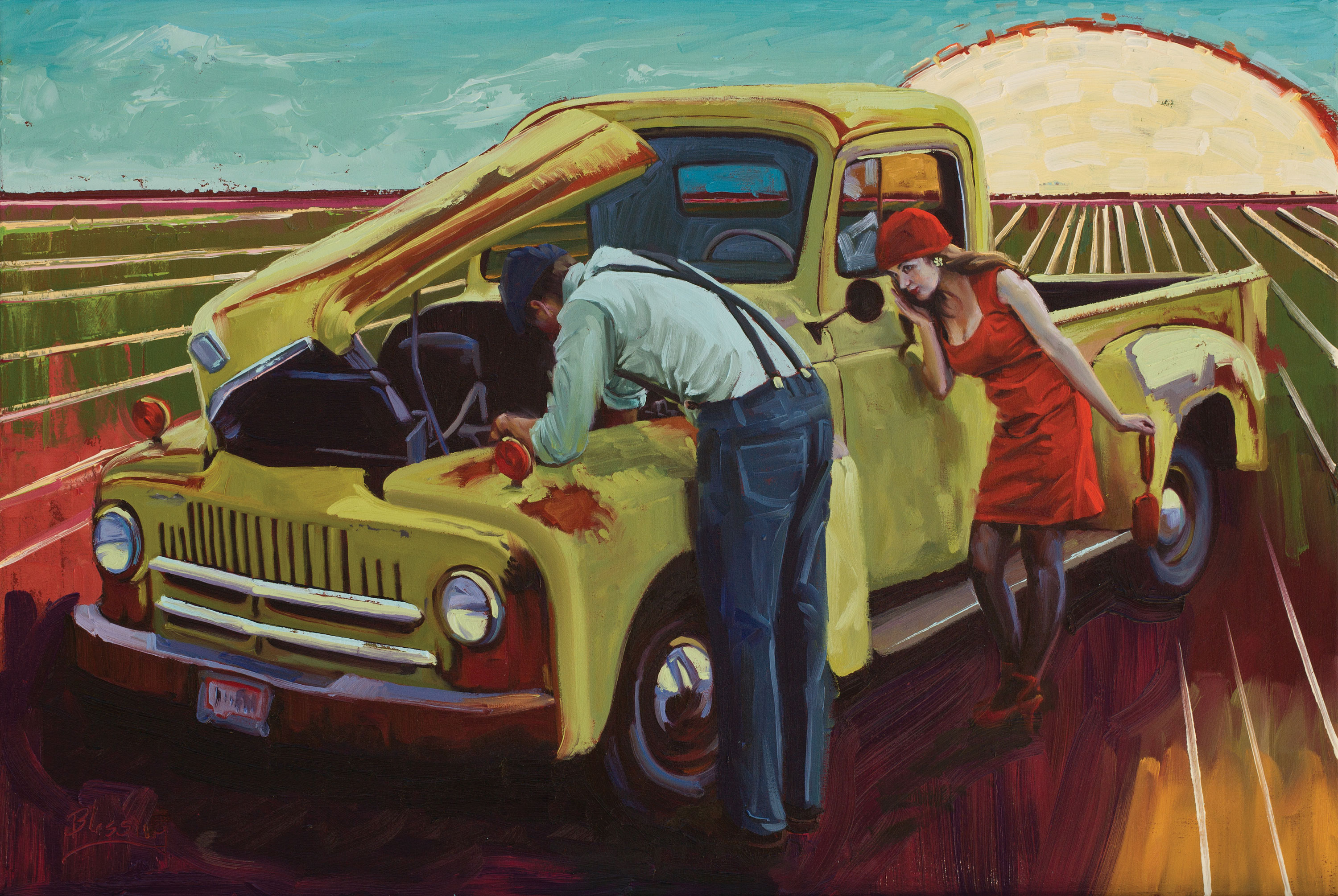 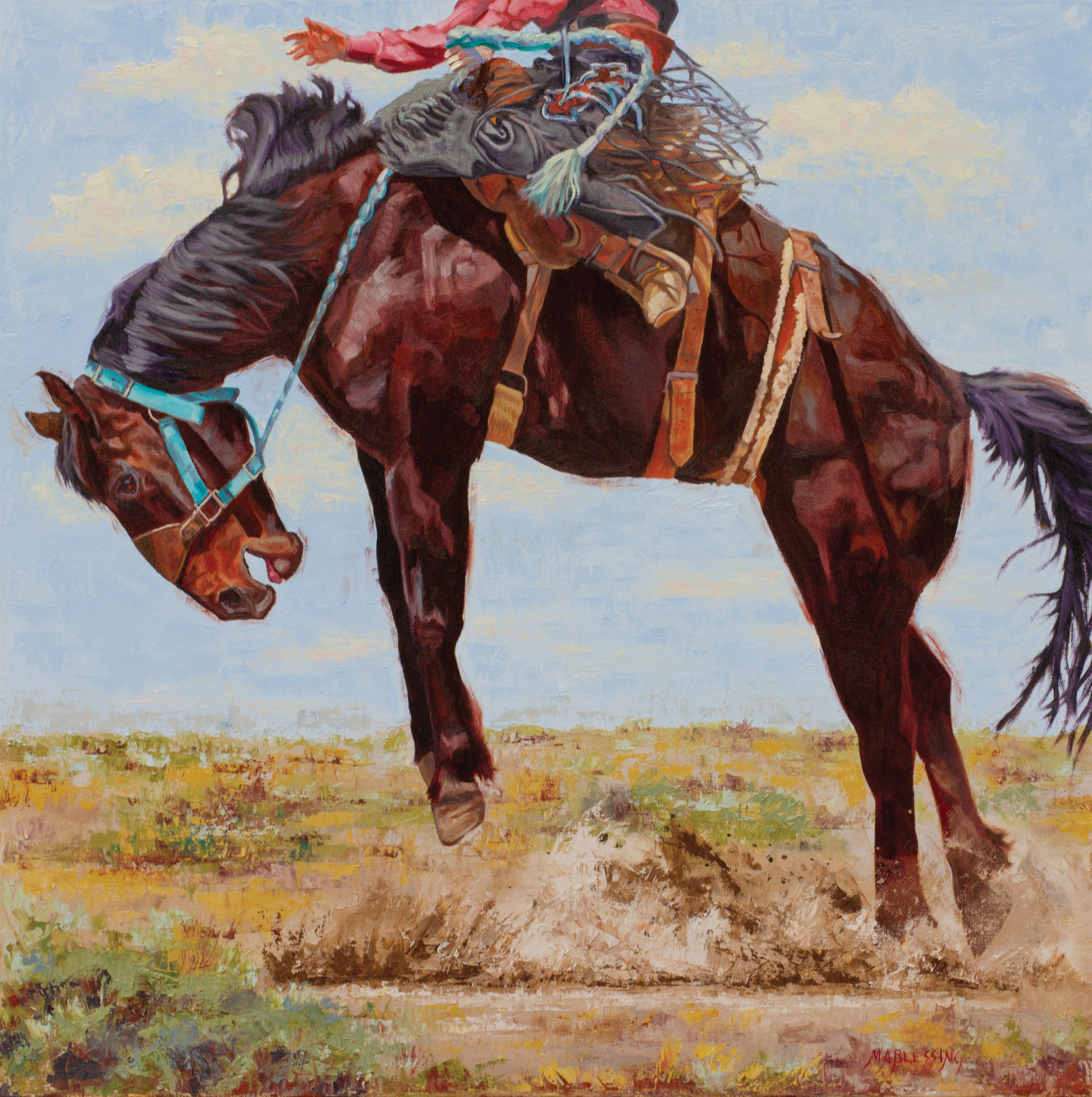 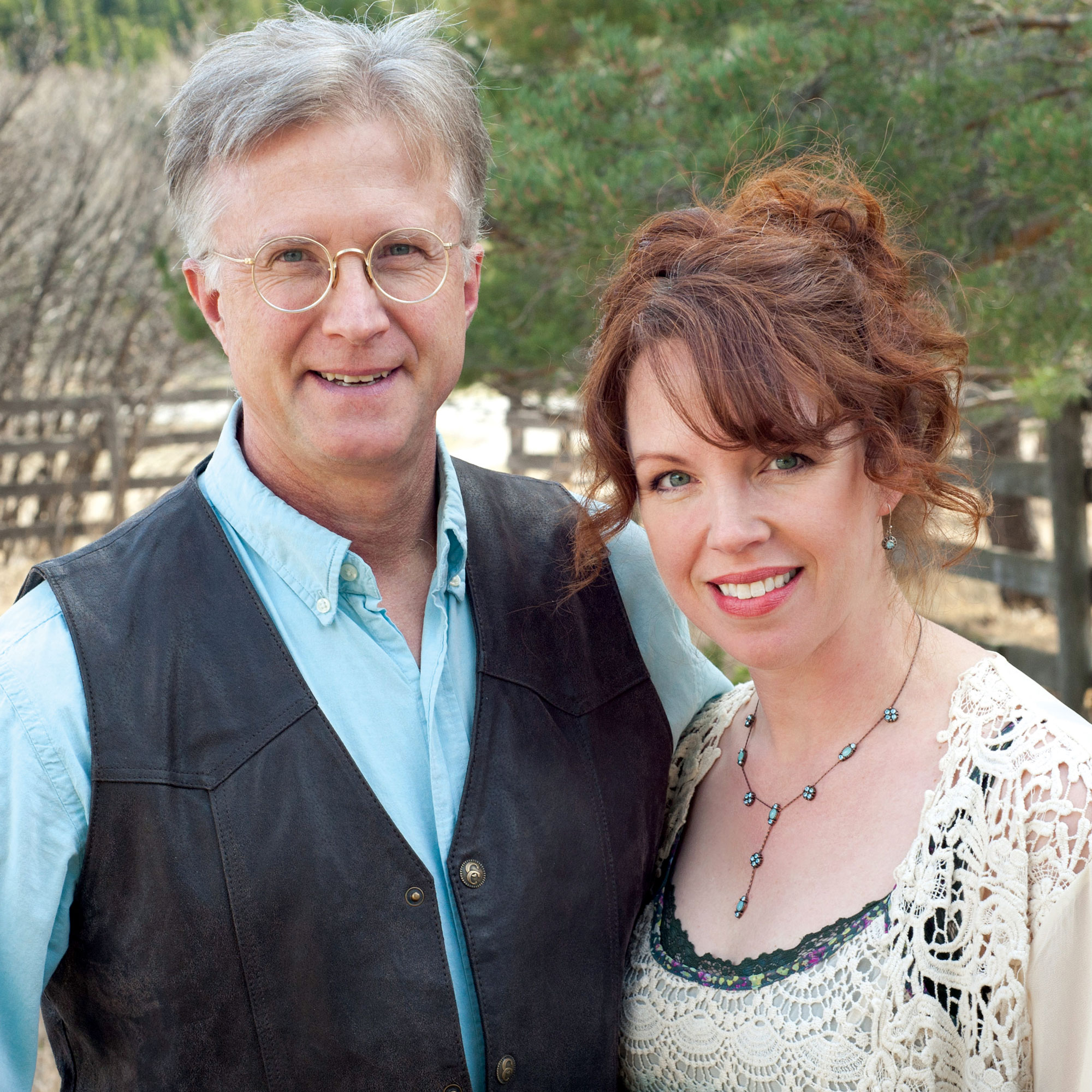 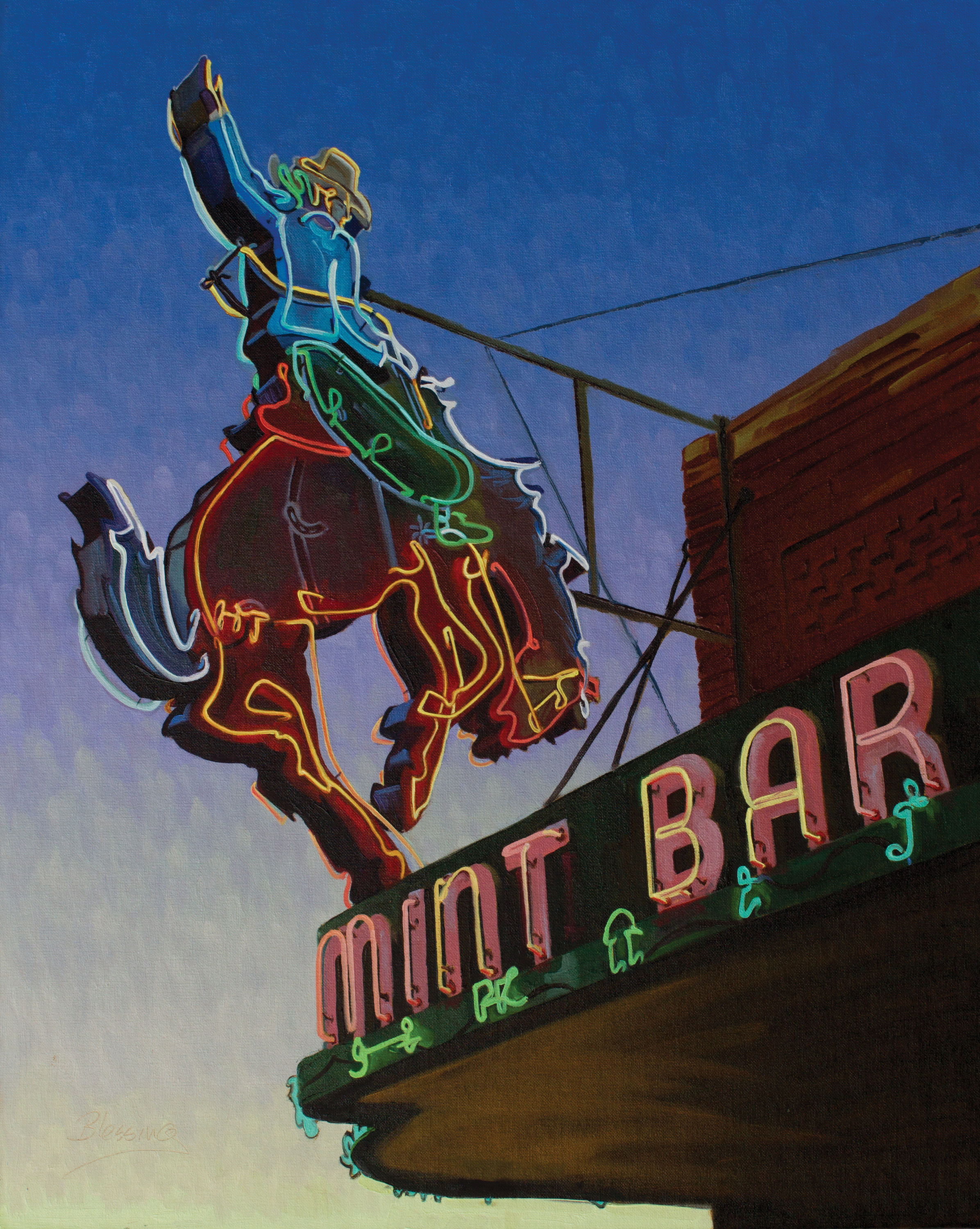 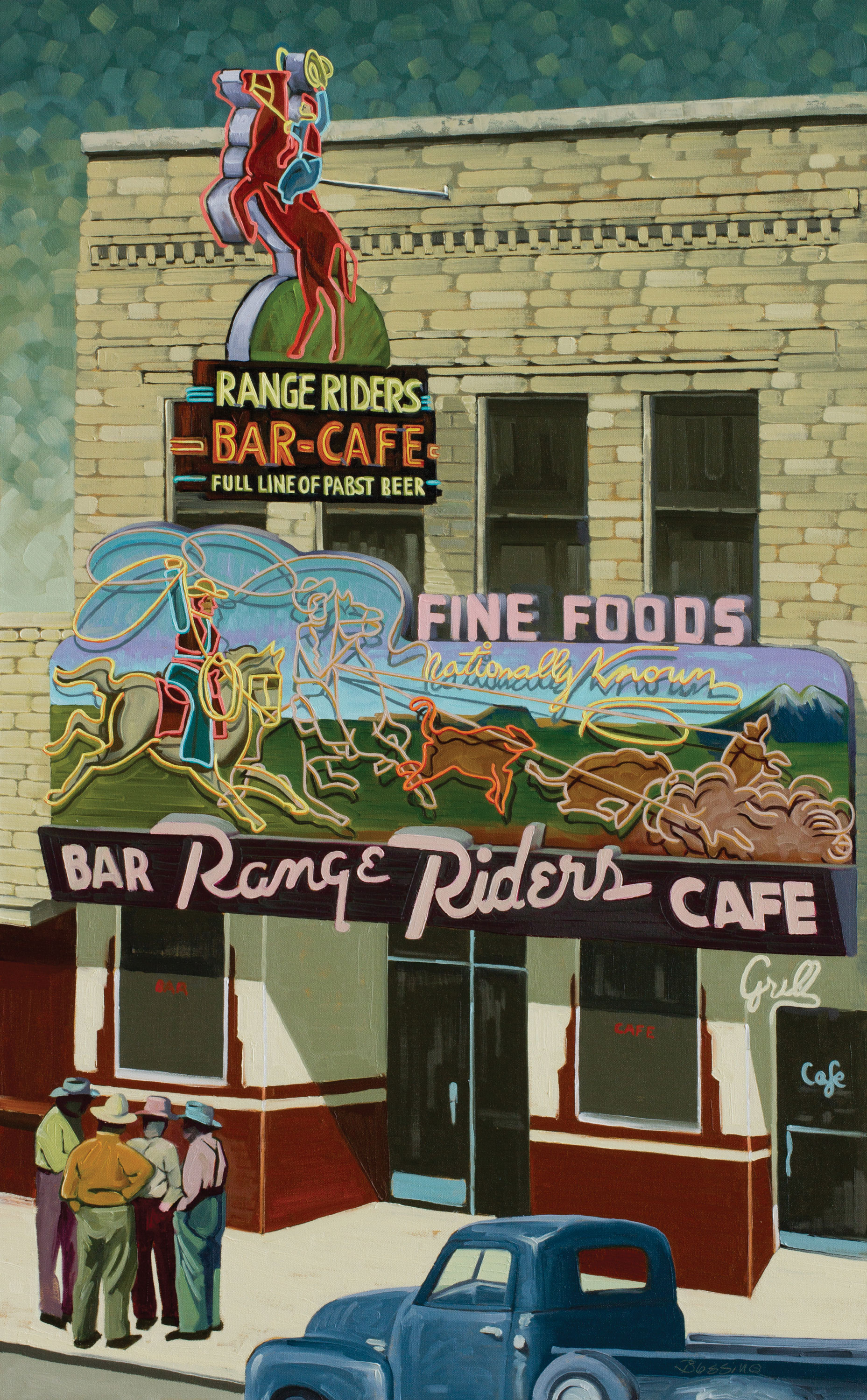