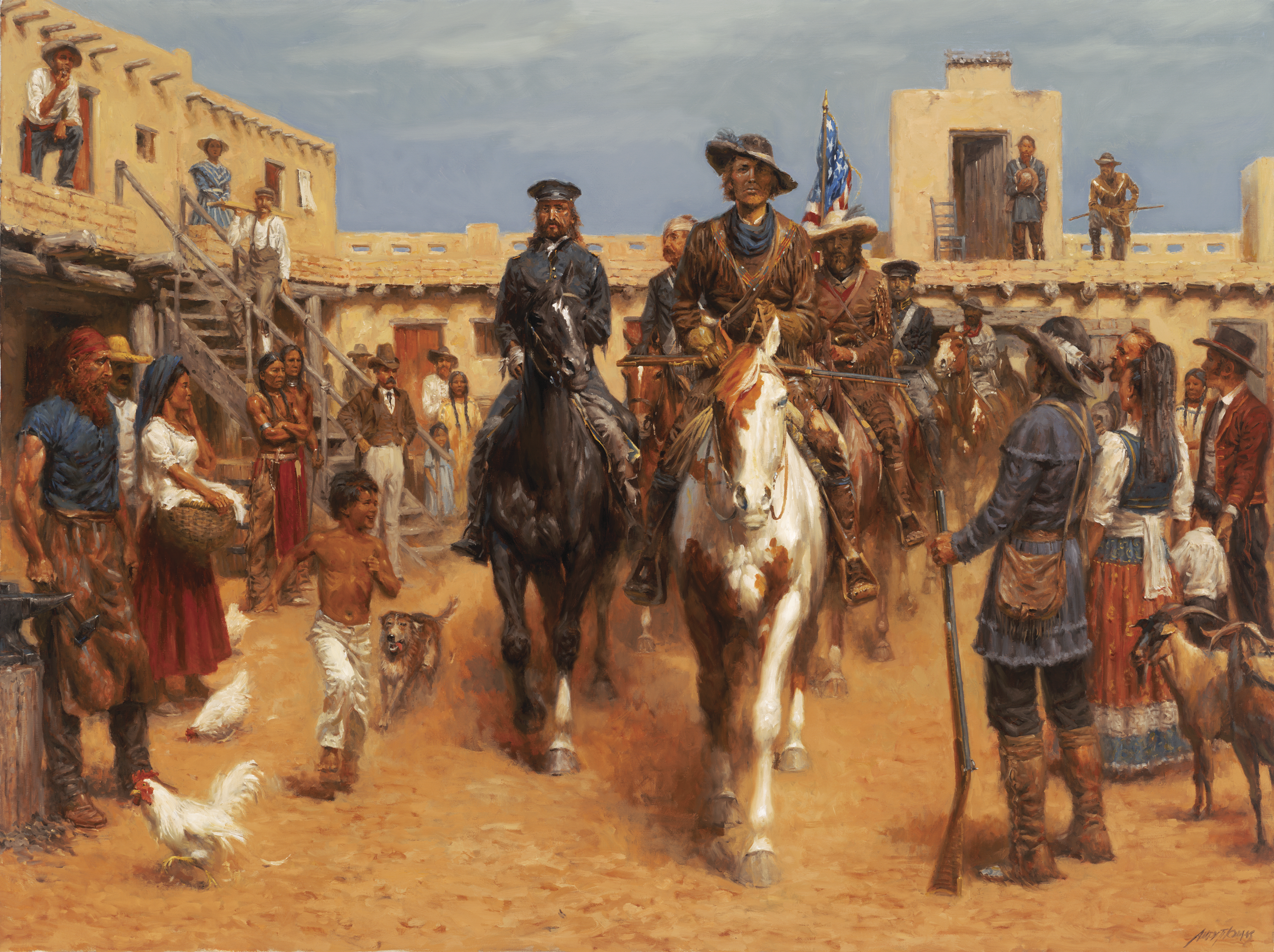 19 Oct The Evolution of a Modern-Day Master

EMPHASIZING HIS PASSION FOR DEPICTING VIBRANT NARRATIVES WITH A TOUCH OF HISTORY, Andy Thomas chose as the title of his newest coffee-table book, The West in Action.

Ironically, however, the volume’s cover image, Hightail to Freedom, more accurately sums up a career forged by Thomas’ fiercely independent spirit. When it comes to personal choices, the 54-year-old self-taught artist most decidedly has a strong preference for taking “the road less traveled.”

At 34, Thomas was promoted to staff vice president of this Fortune 500 company, an enviable accomplishment for one so young. However, climbing the corporate ladder meant less time at the drawing board, so nights and weekends Thomas funneled his creative energy into producing works depicting the history of his family and that of the Carthage area.

The artist credits his wife, Dina, whom he married in 1988, for providing the encouragement to turn this hobby into a full-time career. Following a path that some might have deemed foolish, in 1991 Thomas turned his back on corporate America to take a risk on establishing a career as a fine artist. Painting out of a home studio with Dina as his business manager, the duo devoted themselves to marketing both Thomas’ original paintings and his print work under the auspices of a company the couple christened Maze Creek Studio.

Thomas has always preferred to be guided by his personal interests as opposed to painting for the popular art market, so images of sailing ships, local holiday celebrations and even his daughter’s dance classes often filled his canvases. A commission came from his hometown to paint a mural depicting the Battle of Carthage. Later he was asked by the National Park Service to produce a series of large oils that would be reproduced on interpretative panels at Pea Ridge National Military Park in Arkansas, and Stones River and Fort Donelson National Battlefields in Tennessee. These commissions helped Thomas establish a reputation for being one of the only artists working in the Civil War genre to paint battles fought west of the Mississippi.

From there, inspired by what he refers to as a “little boy thing,” Thomas moved on to portraying Western historic events in a style reminiscent of stories found in the dime store novels that were so popular at the end of the 19th century. And unleashing his vivid imagination even further, Thomas also enjoyed dreaming up compositions such as Grand Ol’ Gang and True Blues, which juxtaposed characters from different periods in history with diverse political persuasions to tell his stories. Dina shares, “Early in Andy’s career when he was painting everything under the sun, we tried never to box ourselves into a corner, considering variety to be an asset.”

While his diverse genres appealed to a wide range of collectors, Thomas’ lack of consistent subject matter eventually became a stumbling block when it came to advancing his career. Mark Smith, co-owner of the Greenhouse Gallery of Fine Art, explains: “Andy can approach any subject matter and paint it accurately and convincingly regardless of genre. However, after the first few years of representing his work, we realized we were not reaching the collectors we knew we could bring in because his range of subject matter was simply too broad. Once Andy focused his skill and talent on compositions with a serious Western theme, sales of his work really spiraled.”

The icing on the cake came when his 36- by 48-inch oil, Charlie Russell and his Characters, sold for a record-breaking $180,000 at the 2008 C.M. Russell Auction in Great Falls, Montana. Additional large works have also sold in the six-figure range.

Sarah Burt, chief curator for the C.M. Russell Museum, has her own opinions on why Thomas’ work has such a mass appeal. “Andy connects to the tradition of storytelling that made Charlie Russell so popular. Russell was the preeminent storyteller and Thomas has the ability to do a similar kind of thing in his paintings. One thing he does that is so effective is create an ‘unresolved moment.’ When an artist does that, it pulls you into the painting and you participate in what’s taking place. Andy’s choice to illustrate moments from the middle of a story, rather than the beginning or conclusion, entices viewers to wonder how the story will end.”

“Andy is also incredibly skillful in orchestrating complex compositions which are visually exciting. And he does it in a way that is very believable to the viewer. Additionally, he uses recognizable historic figures — for example, Kit Carson, in his 2012 auction piece, Kit Carson and the Fremont Expedition at Bent’s Fort. History aficionados love this because they like seeing what they know about history put into visual form.” She notes that Thomas also has the unique ability to create historical composites such as American Storytellers, which depicts a group of famous people including Will Rogers, Mark Twain, Charlie Russell and Ronald Reagan sitting around a campfire telling stories. “It’s almost like he has given the viewer a personal invitation to sit with these great people.”

Comprised of works in three mediums, the artist’s first solo exhibition, Andy Thomas: Pen, Pencil and Brush, which opens on November 16 at the Greenhouse Gallery of Fine Art, is an event that will certainly live up to its billing as an “exhibition as unique as the artist himself.” Mark Smith emphasizes, “We are really excited about what Andy has put together. The range of mediums, subject matter and price points makes it possible for even beginning collectors to find something they can’t resist taking home.”

Passionate about working in pen and ink and pencil, Andy and Dina decided that this exhibition would be the perfect time to share Thomas’ small works with a wider audience. Smith agrees, noting, “Drawings are the most direct connection to the artist because they truly highlight their ability. Fine draftsmanship is fundamental to the process of creating great art, and Andy is an exceptional draftsman and storyteller. One of the things that people enjoy so much about Andy’s work is the story in each painting and the resulting dialogue between artist and viewer. Be it a horse, the rider or an action-filled moment, Andy really captures the essence of his subject and brings the Old West to life.”

True to his character, Thomas is not yet ready to be pinned down to the exact nature of works he is creating for this exhibition. He shares that most will have a Western flavor, but qualifies that statement by noting that the mediums of pen and ink and watercolor do not really lend themselves to the action oils for which he is most widely known.

He does, however, intimate that one or two large works might be among those on exhibition. Tantalizing about the subject matter, he shares that recently he has been drawing inspiration from reading journals written by 19th-century working cowboys. One favorite is Log of a Cowboy. Thomas enthuses, “It’s more like a novel based on personal experiences tied into a cattle drive which went from Mexico to Montana. I bet there are at least 10 paintings in there that are taken directly from the author’s accounts. Since three-quarters of my family were here before America became a country, I might just have an American history work in there as well.”

Whatever the content, viewers who set aside personal genre favorites and open themselves to Thomas’ entire range of talents will truly experience the artistic mastery of a Western storyteller at his finest.

Editor’s Note: The West in Action will debut at a book signing during Thomas’ exhibition and at the Greenhouse Gallery of Fine Art in San Antonio, Texas, November 16 and 17. 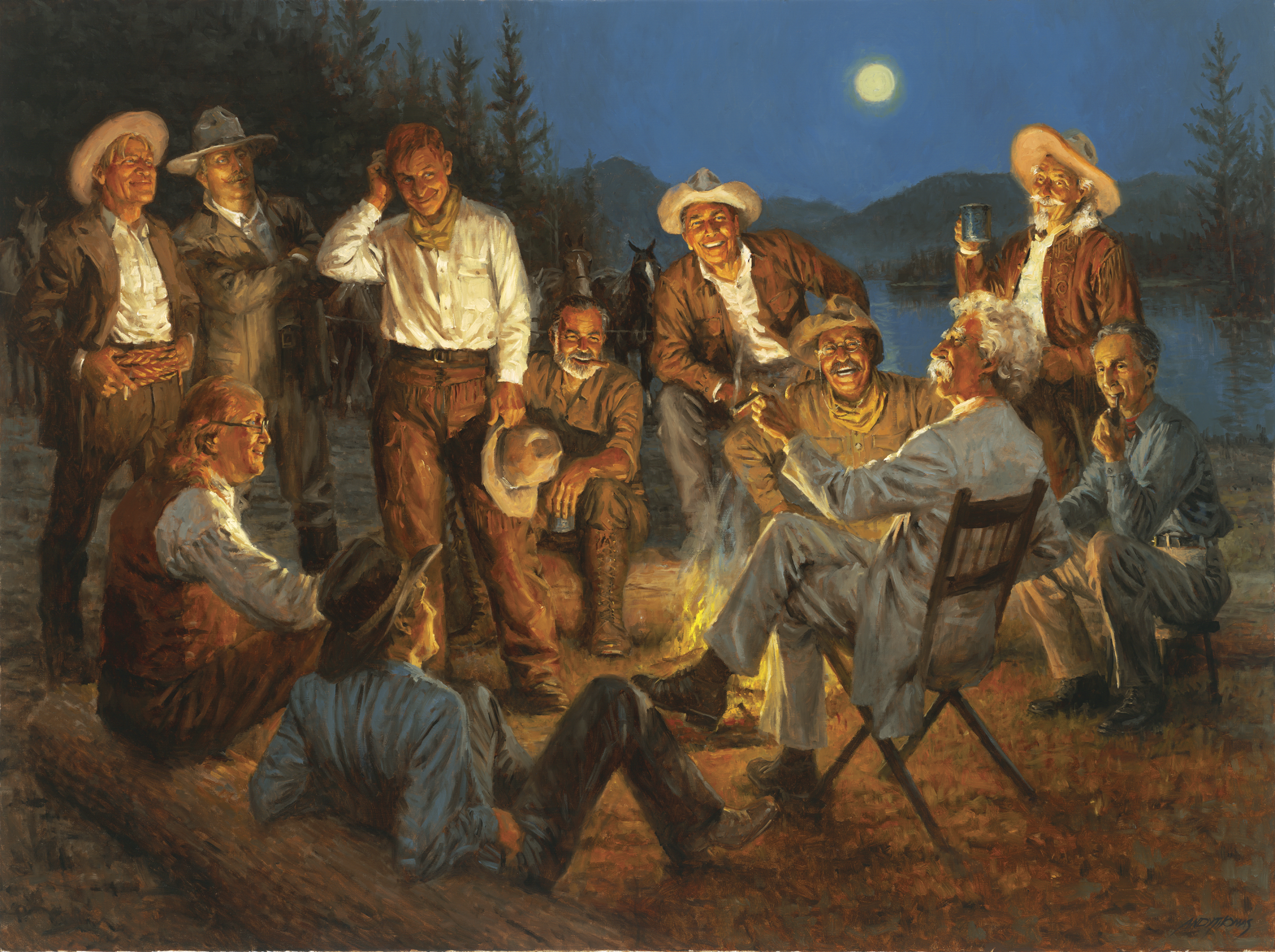 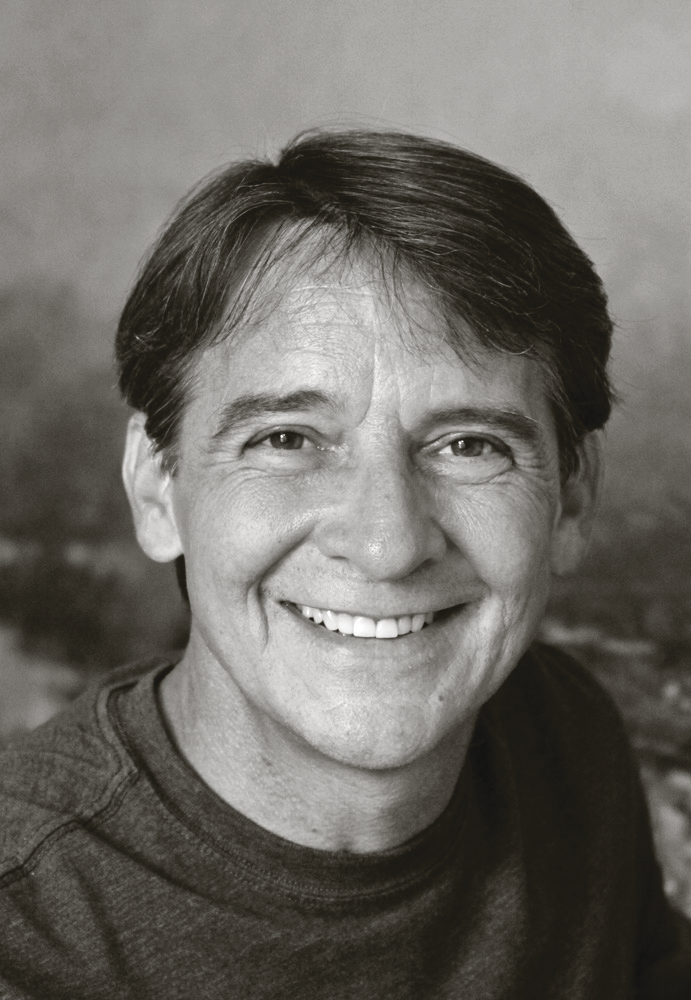 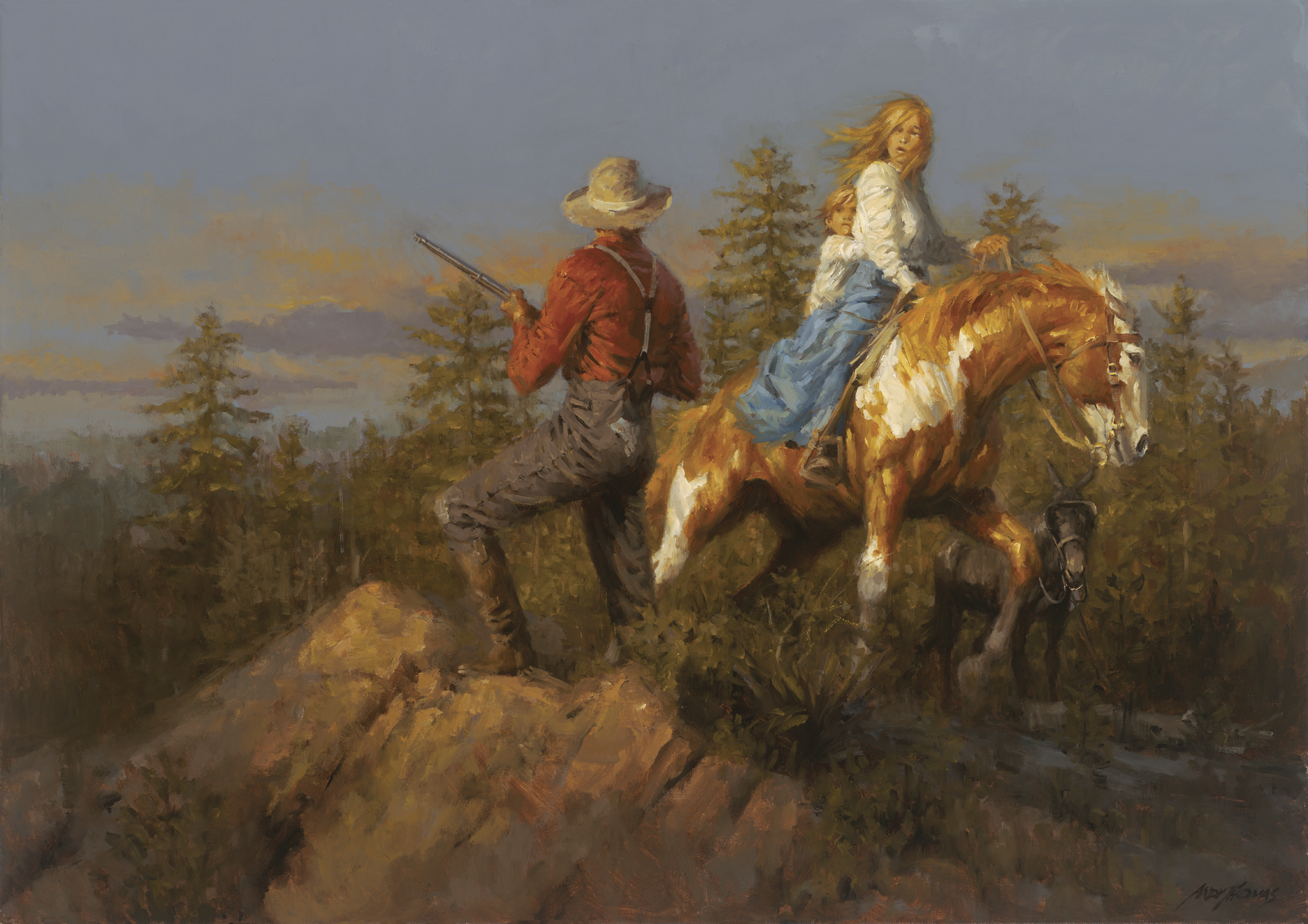 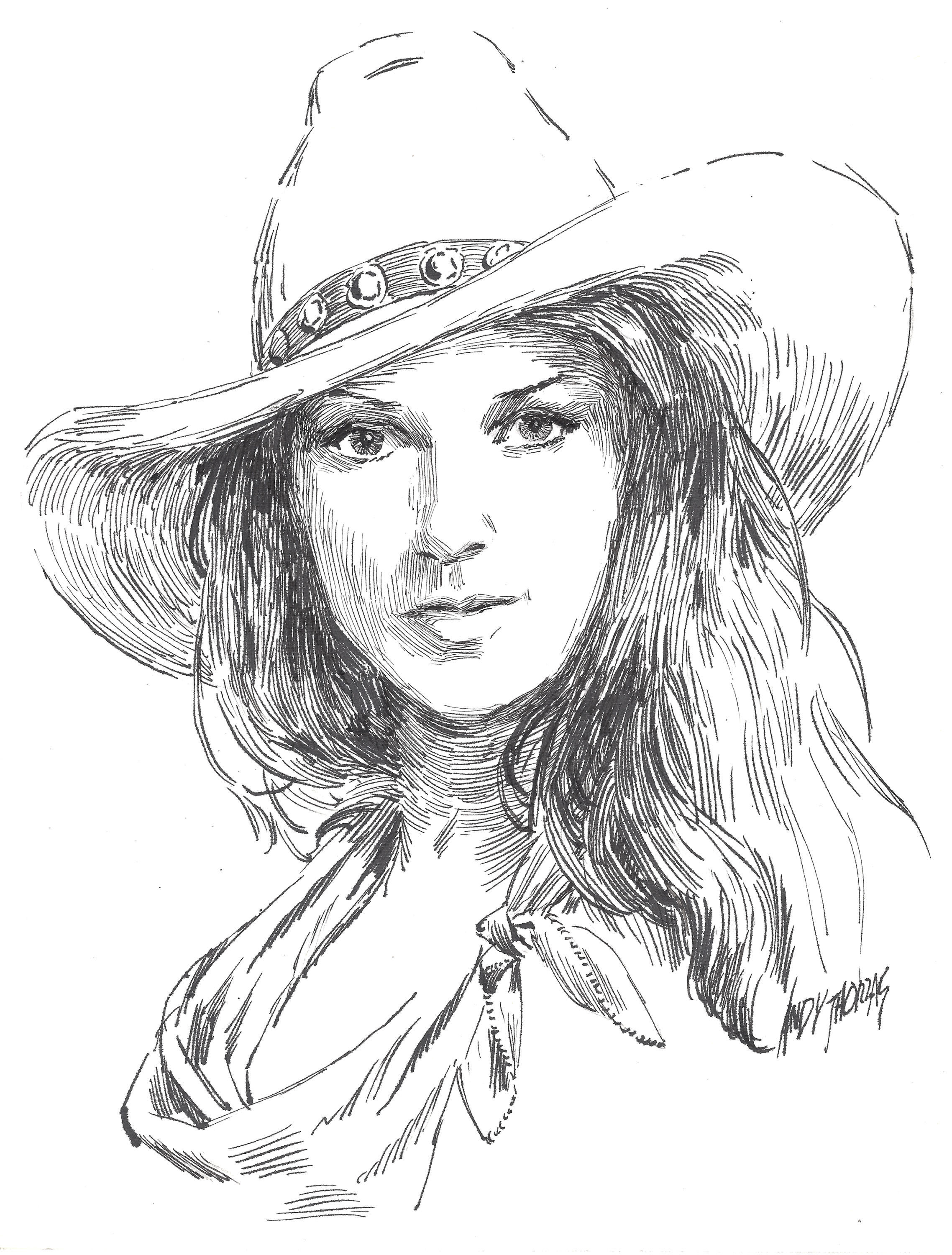 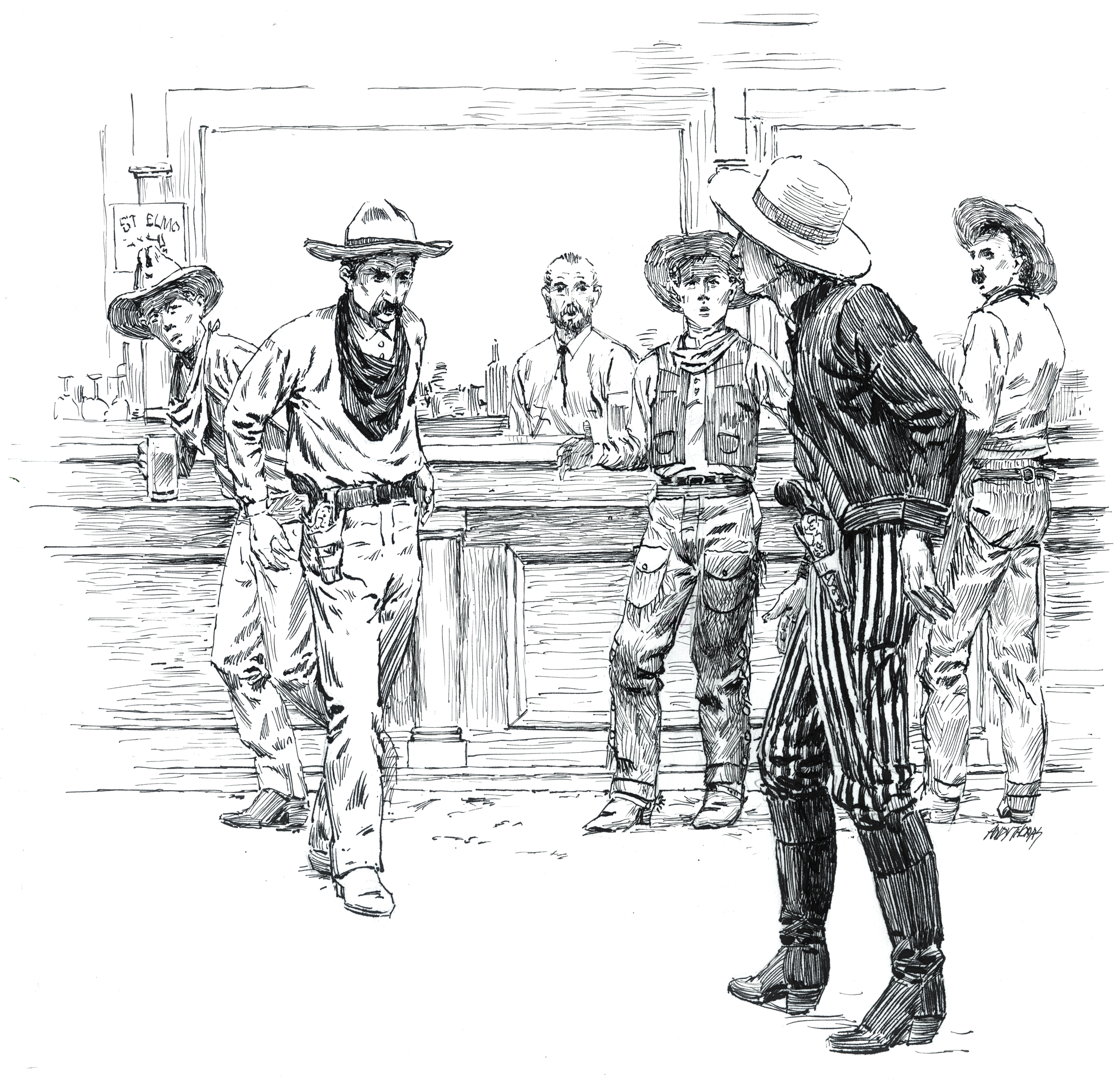 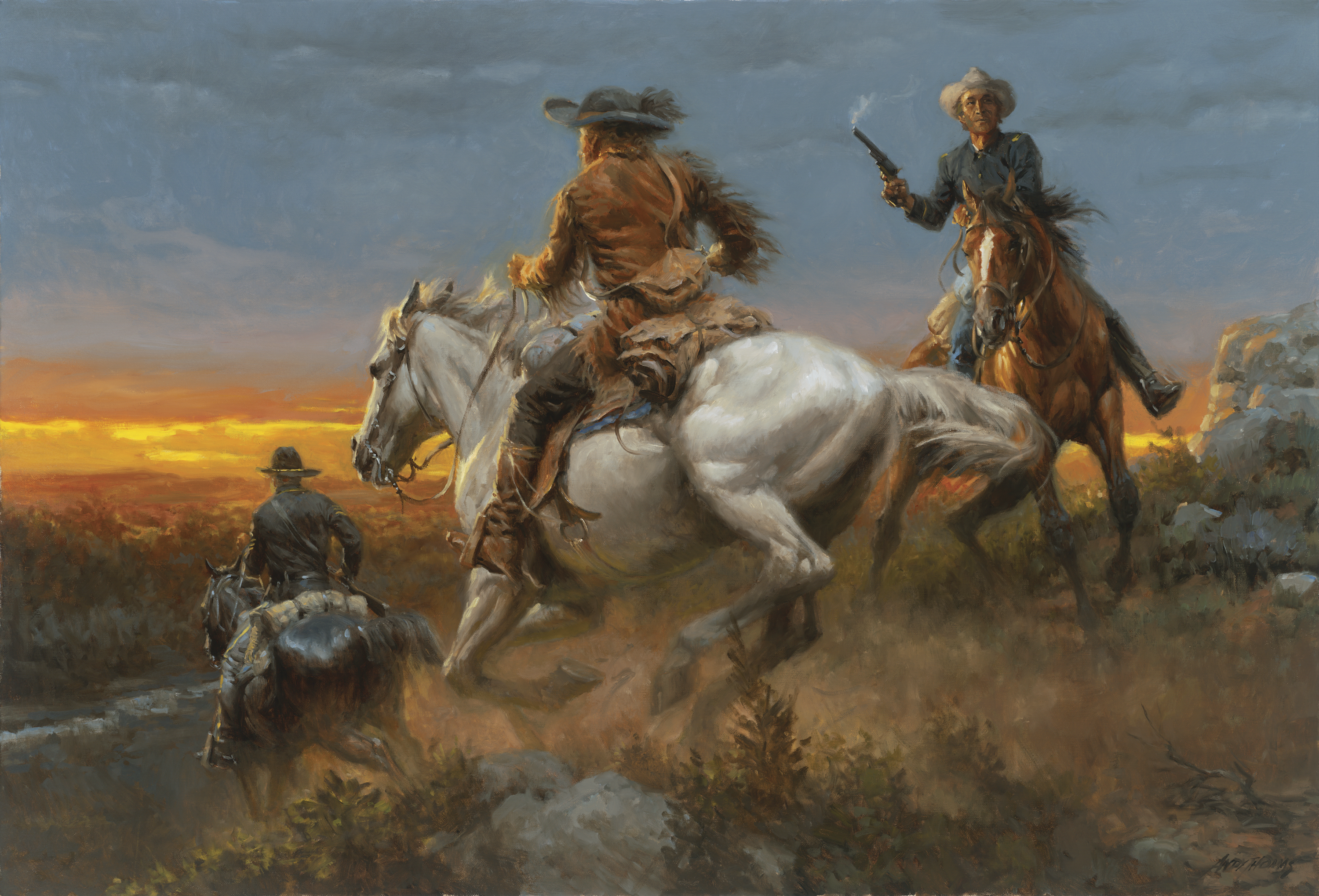