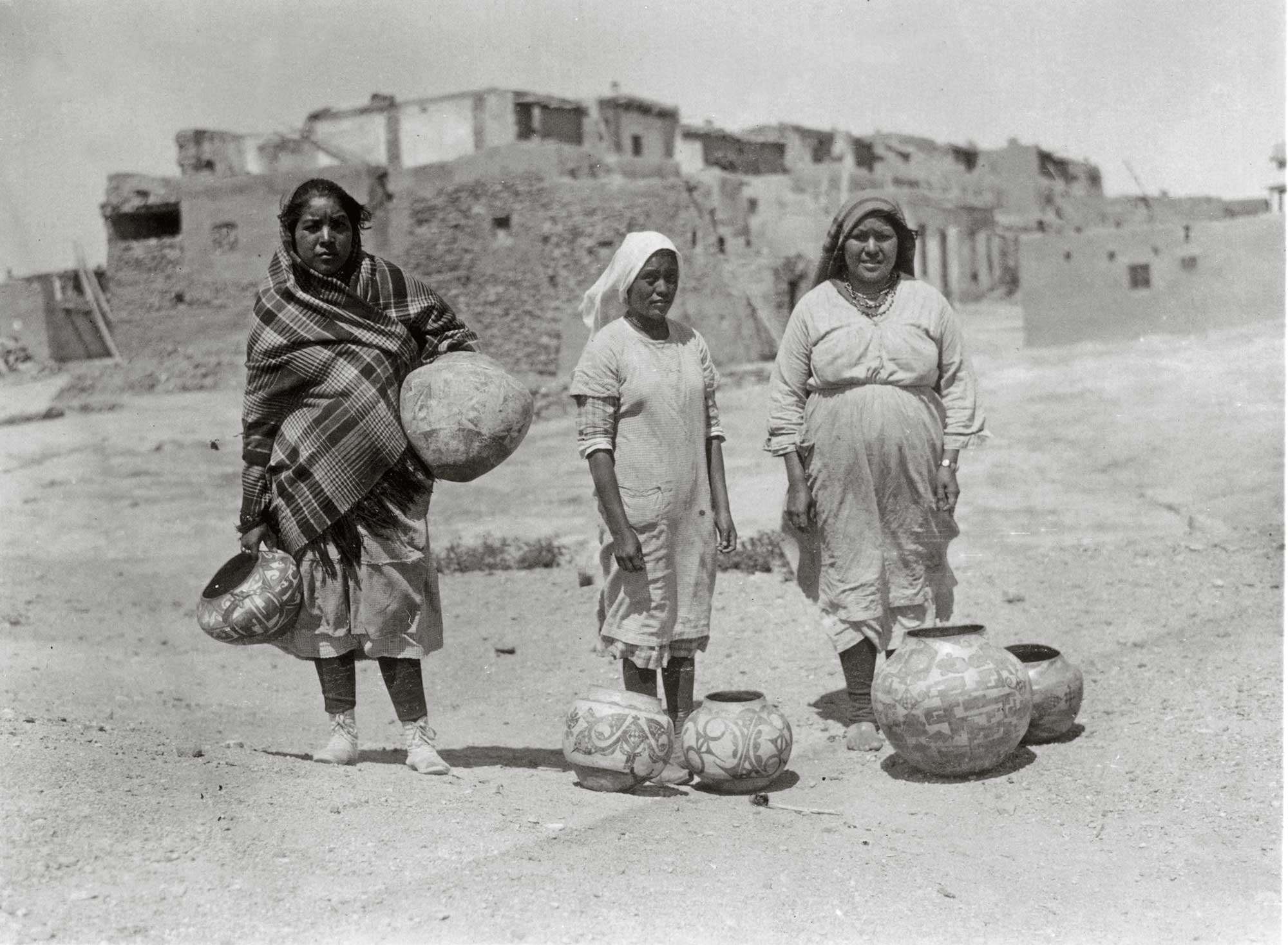 AS YOU GET CLOSER, IT SEEMS ALMOST TO FLOAT in the distance like a giant mirage … a light-brown mesa baking in the heat, and jutting out 370 feet high and a quarter-mile wide from the high desert west of Albuquerque.

Atop this mesa on the Acoma Reservation, the way it is, is the way it was. The people still live as their ancestors did a thousand years ago, in the place they call “Sky City.” The houses are attached brown pueblo, made of sandstone and clay and dried mud, with peeling wooden doors of red and green and turquoise. Chili peppers hang out in the sun to dry. The roads are dirt. There is no running water; it has to be hauled up from below. There is no electricity. There are no phones. When you want to go “upstairs” in your home, you have to go outside and climb up a hand-carved Kiva ladder to do it. And, when a stranger wanders around, wrinkled faces framed in native dress peer out tentatively from behind torn lace curtains.

The Four Matriarchs were Acoma women — Marie Z. Chino, Lucy Lewis, Jessie Garcia and Juana Leno — born around the turn of the 20th century. These women, with their bare hands and the most primitive of tools, revived the ancient style of Acoma pottery. And, in so doing, they gave rise to a style now preserved and nurtured by their descendants — and prized for its design, color and workmanship.

It’s a style that is, in fact, becoming increasingly popular with museums, galleries and collectors. “I first became attracted to Acoma pottery in the early ’90s,” says David Rasch, a Santa Fe collector who now has more than 400 Acoma pots. “The thin white ceramic style — unique from any other pueblo — and the incredibly precise painting, really stirred my soul.”

Rasch has loaned a good part of his collection to the Haak’u Museum at Acoma, for its current Four Matriarchs exhibit. (The exhibit was originally scheduled to end in March, but has proven so popular that it’s still on display as of this writing.) Among Rasch’s most beloved pieces is an ancient drinking mug. He also has a number of pieces from the Matriarchs, with values ranging from approximately $3,000 for a 10-inch-wide bowl to $13,000-$14,000 for a bowl that’s 13 inches wide. Among his favorites are a polychrome canteen from Marie Chino and a bowl from Lucy Lewis.

The Four Matriarchs are now in the history books. But they would be truly amazed to know this. They never intended to make a kind of statement or to create an artistic revolution.

“My grandmother did it only because she thought the ancient style was worth preserving and worth teaching to the younger generation,” says Joanna Garcia, granddaughter of Marie Chino. “At first, she just re-created the old style for pleasure; she was surprised when people actually started showing interest in buying it.”

Garcia was raised by her grandmother, and spent many hours observing Chino’s dedication to her craft. She says that Marie was always experimenting with new colors and patterns on smaller pots first. If they looked good on the smaller pots, she then moved on to larger ones.

Chino’s specialty was seed pots, which the Acoma used to haul grain, corn, water and seeds up to the top of the mesa. Today, her distinctive seed pots, with their orange designs and owls, are sought after by collectors. Garcia continues the tradition her grandmother taught her, creating distinctive pots of her own (selling for $20-$800), and firing them the old-fashioned way — in an outdoor oven made of dried mud, rather than in the modern kilns used by many potters.

“Acoma pottery has a genuine artistic flair,” says Mike Kokin, owner of a prestigious Santa Fe gallery called Sherwoods Spirit of America. “It’s very much in demand because of the quality, the traditional way in which it’s made and the beautiful, soft colors.”

According to Kokin, this pottery began grabbing the attention of the outside world right after World War II. Tourists, driving through New Mexico on storied Route 66, began stopping their cars when they noticed Native Americans sitting on the side of the road, selling their pots. Acoma pottery began gaining real commercial value in the 1950s, when the Four Matriarchs started signing and dating their work. Today, some designs sell for as high as $25,000 on the fine art market.

Many of the pots depict everyday motifs common in ancient Acoma life: bears, parrots, owls, berries, fish, rainbows and, quite often, clouds, which are life-sustaining in rain-starved New Mexico. The pottery is usually easily identifiable, because of the distinctive monochrome and polychrome geometric designs, very thin walls, and fluted tops.

The modern potters who still work in the traditional way have to go through a meticulous — and very laborious — method. But the results, they say, are worth it.

“We do it the way our ancestors did,” says Emma Mitchell, daughter of Matriarch Lucy Lewis. “This is one way to honor them. We start by going out to very remote areas of Acoma, and digging for clay, and also shards from ancient pottery.”

The clay must be cleaned and filtered for impurities, and soaked in water until it becomes very soft. Then the clay and shards are ground together. The next step, often, is to use coils of wire to fashion the shape. It takes many hours to do this, and more hours to smooth and sand the vessel. The next steps are the carving and painting, which must be exceptionally fine and precise. Then — after the potter may have already put in 60 to 80 hours on the piece — it is fired over a large outside fire, generally in one of the ubiquitous mud ovens on the mesa.

“And,” Mitchell points out, “everything we use is natural. We get the clay and the shards from the earth. We get our colors from vegetables, and also from grinding different colored rocks. We use polished stone, mineral paints; even our paintbrushes are from the earth — we use yucca plants.” (Mitchell’s pottery sells for $25-$1,500.)

For the Acoma, the often lonely trips to scavenge for the raw materials used in their craft are as much spiritual as artistic.

“When we look for clay,” Joanna Garcia says, “we pray to our ancestors at those spots. We feel at one with our past. And it brings happy thoughts to us.”

Mike Kokin, of Sherwoods Spirit of America, says this devotion to the traditional way of making pottery is why he only buys (and sells) older works rather than contemporary. Although his most valuable pieces are generally from 1910 to the 1940s, he does have one piece from circa 1890 that sells for $24,500. Another, a five-color (polychrome) bowl with birds circa 1925, sells for $19,000. Many others from the early 1900s — if in good condition — sell for about $12,000. Kokin notes that, although he sells Acoma pottery for its artistic rather than its investment value, it tends to appreciate rapidly if it’s in good condition.

Debbie Brown is the granddaughter of Jessie Garcia, another of the Matriarchs. She recalls sitting with her grandmother on the side of Route 66, and tourists stopping to buy the older woman’s work. And she believes it’s not coincidental that those are the years when tourists began actually stopping at the reservation — and not just the side of the road — often, to buy pottery.

“My grandmother taught my mother,” she says, “and my mother started teaching me when I was 12 or 13. We believe it’s very important to teach each new generation the skills involved in making pottery. It’s not just about the pottery. It’s about our roots, and our history.”

Today, Debbie Brown is a well-known potter in her own right, selling her work for $10 to $8,000. She notes that it’s increasingly more difficult to teach the younger generation the skills of traditional pottery, because, like youth all over, they often succumb to the lures of camera-phones and computers. But the oldest of her four daughters, a teenager, is now starting to learn pottery.

“For us,” Brown says, “it’s a very spiritual thing. Before I start, I always put some cornmeal out, and pray to my ancestors, asking for help in the creative process. Your mind needs to be clear, and very much at peace. And when I see something coming out the way I envisioned it, there’s a great sense of joy.”

Acoma pottery, when viewed in Sherwoods Spirit of America gallery or in the Haak’u Museum on the reservation, seems almost to vibrate with the echoes of a proud past, and with the historic rhythms of a people defeated centuries ago by the Conquistadores — but never vanquished. It’s a living memorial to an ancient past that lay dormant until the last century. The intricacy of the carving, and the beauty of the painting, is truly striking.

A hundred years ago, four young women decided to make traditional Acoma pottery — for the sheer joy of it. Little did they know they’d come to be called The Four Matriarchs. And little did they know, too, that some of their tribe’s ancient works — the style of which they re-introduced — would hold such cultural and financial merit for future Acoma generations. 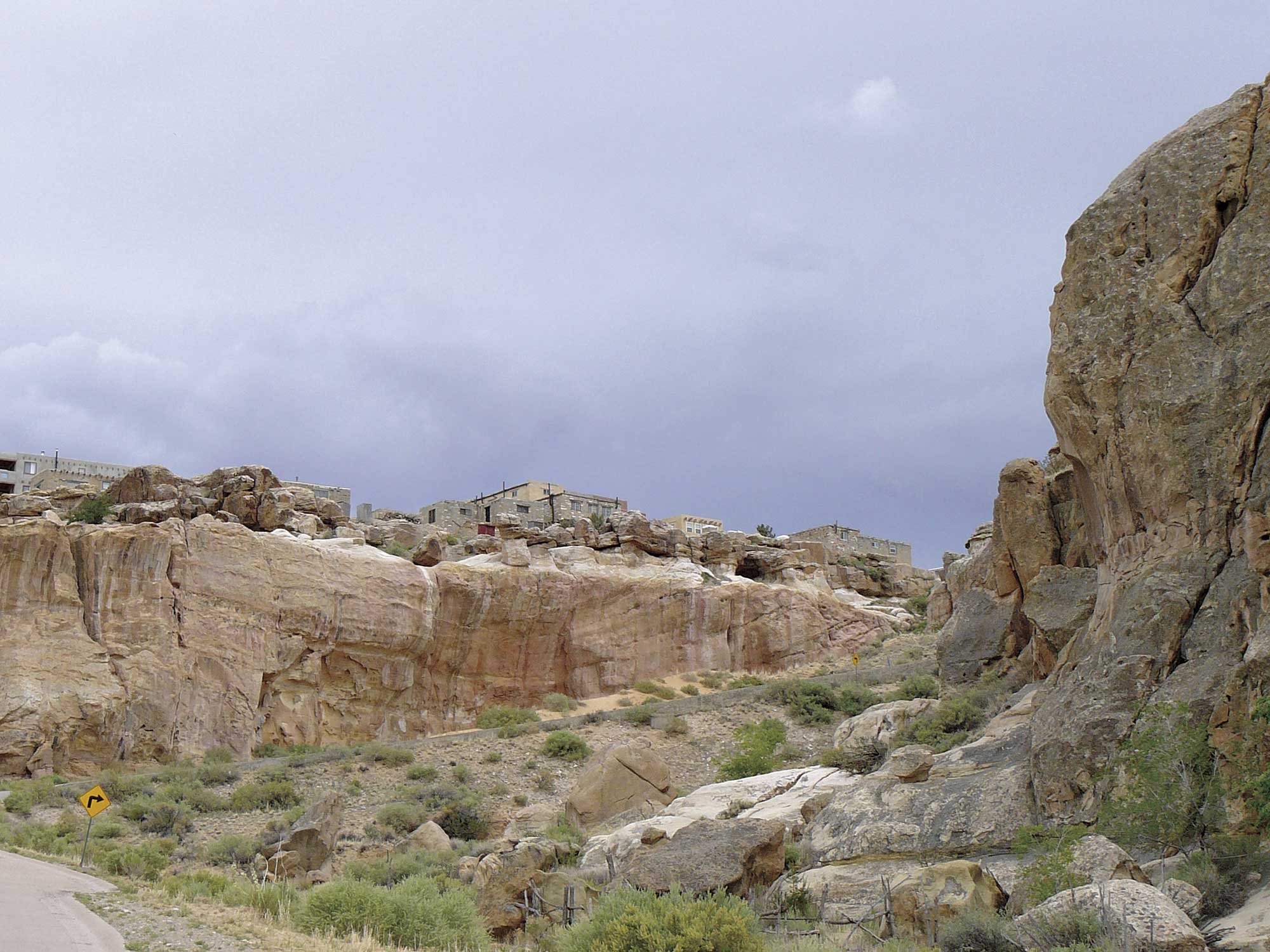 The original Acoma settlement of “Sky City” is the oldest continuously-inhabited city in America. Photo: K-Graphics 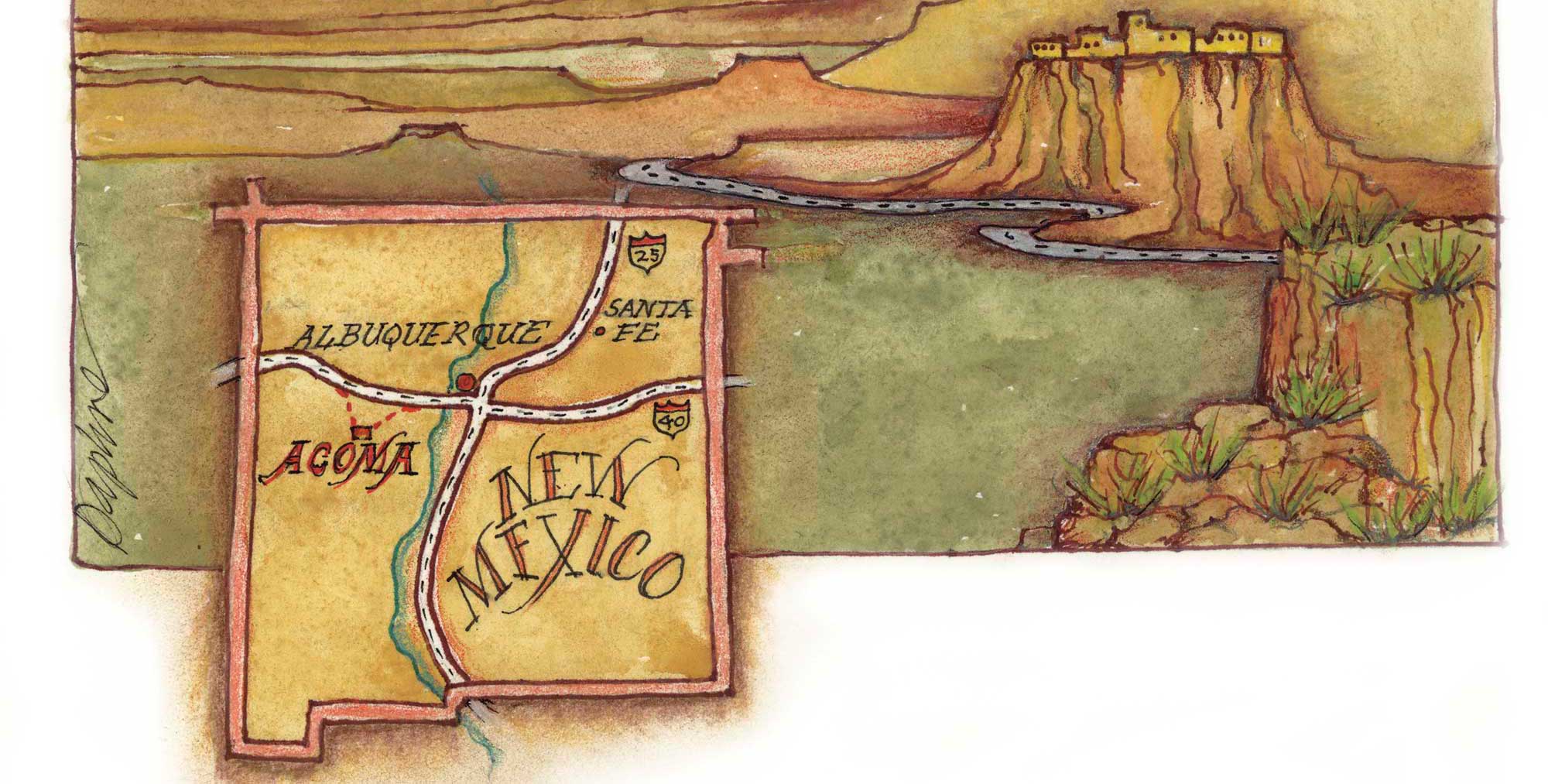 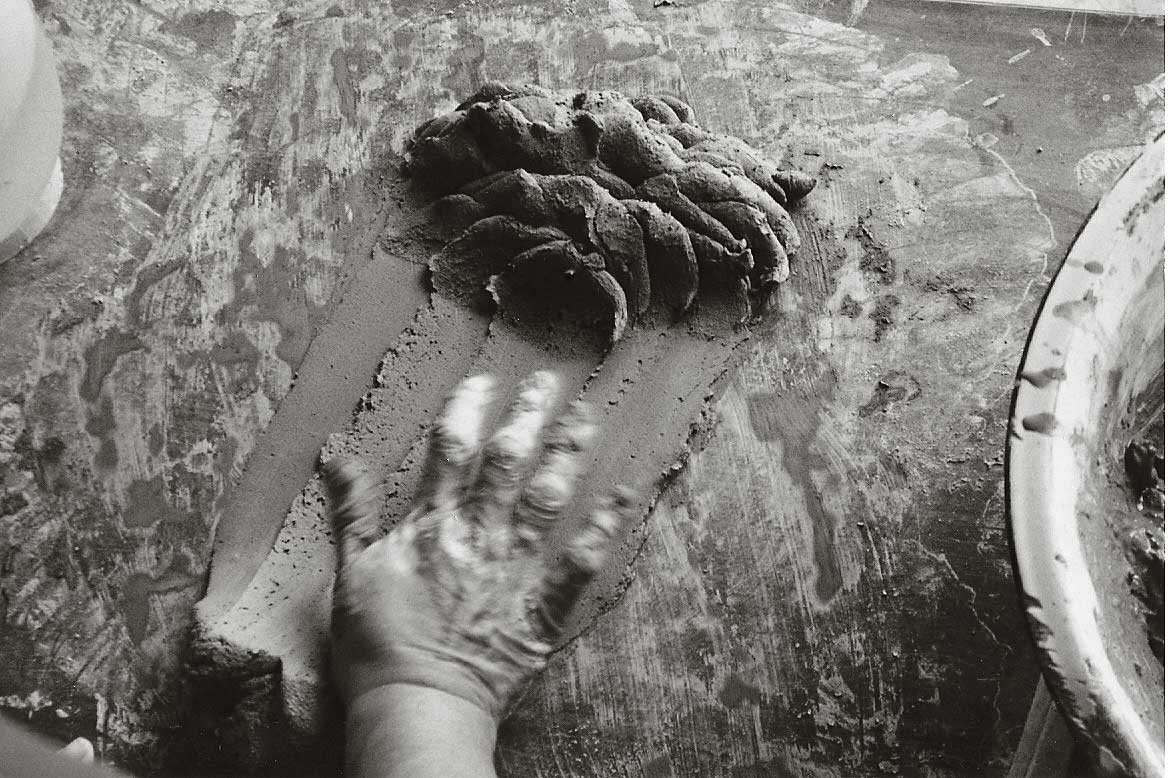 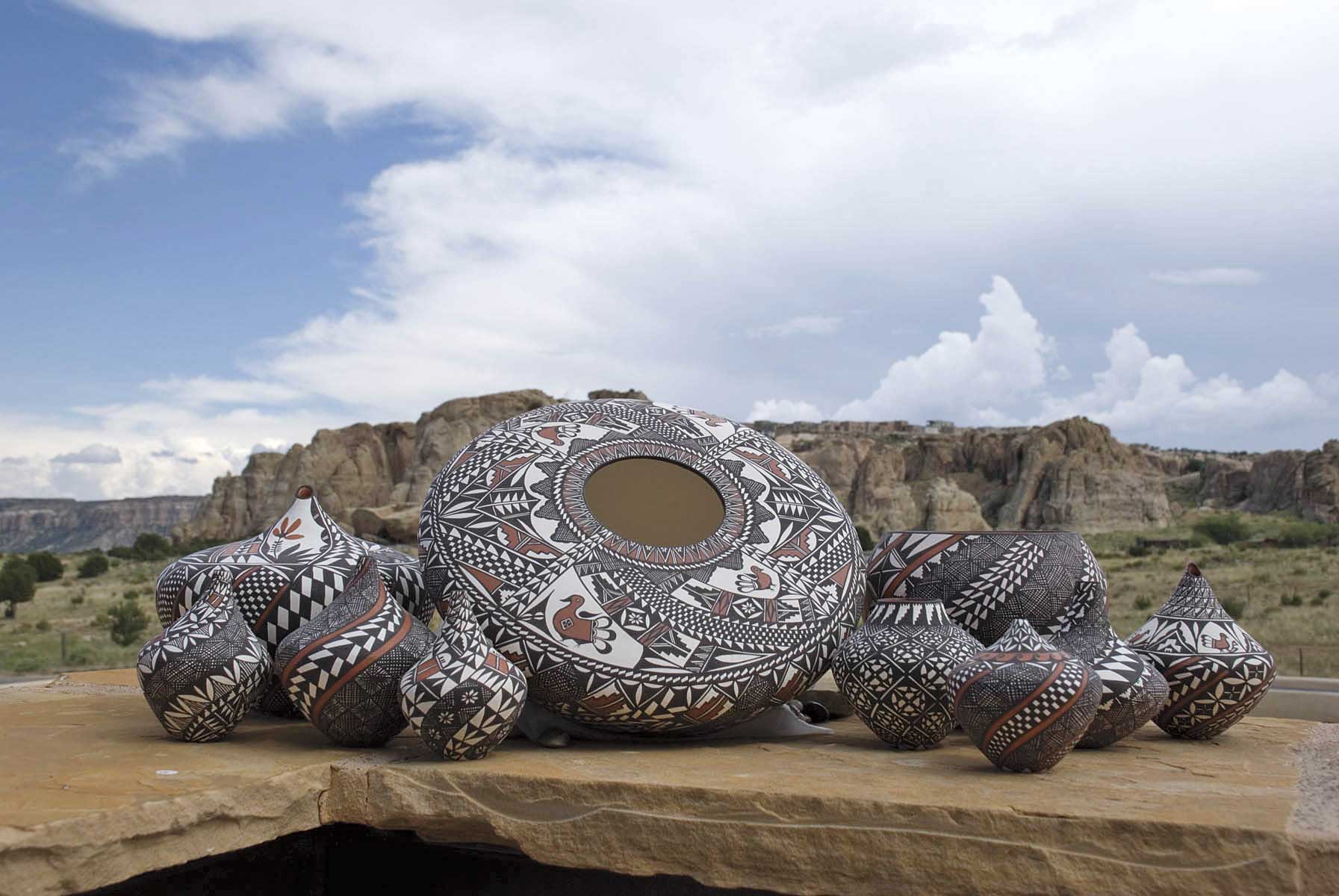 Ancient examples of traditional Acoma pottery. It can take up to 80 hours to make a piece. Photo courtesy Sky City/DC-International 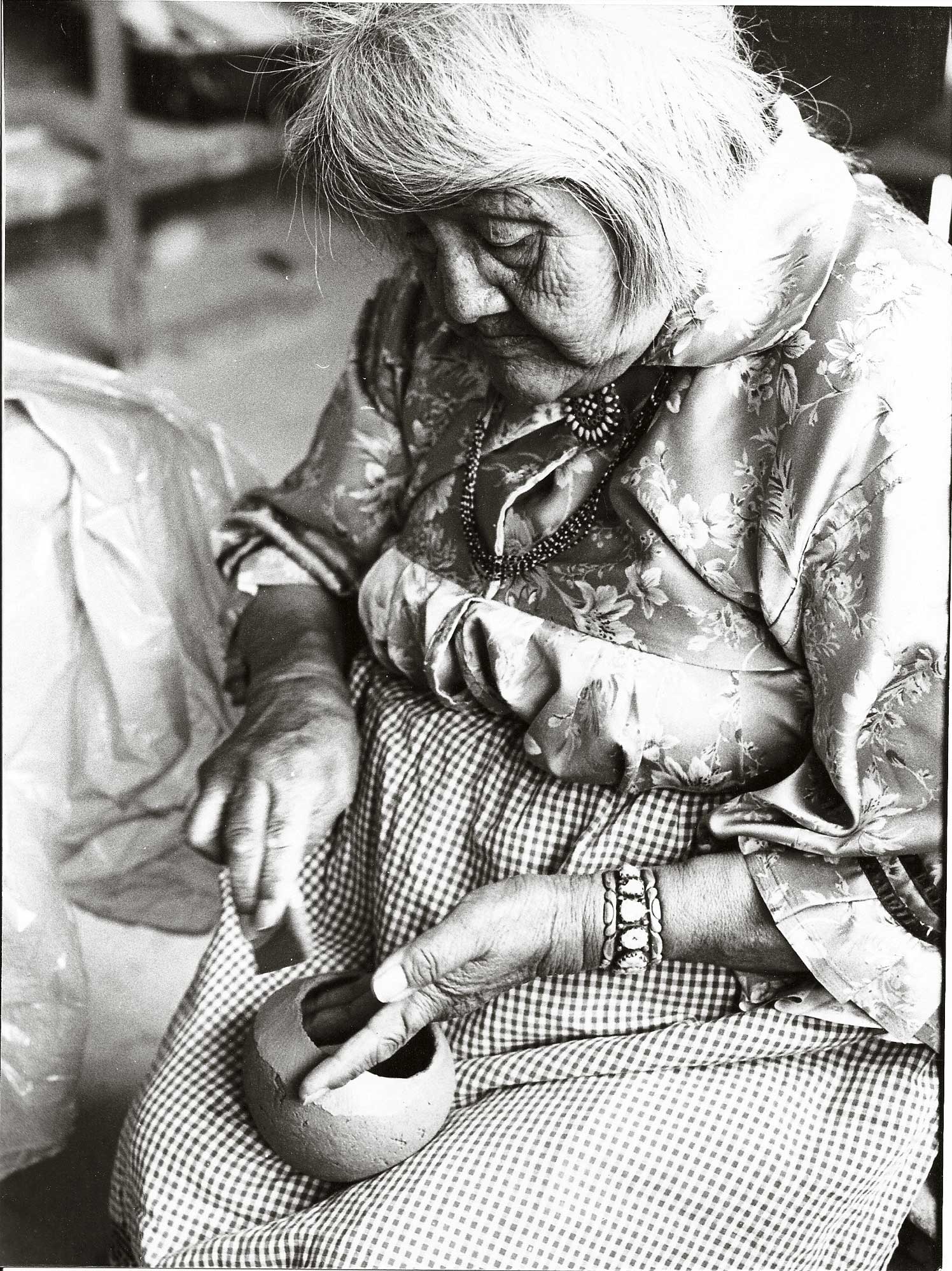 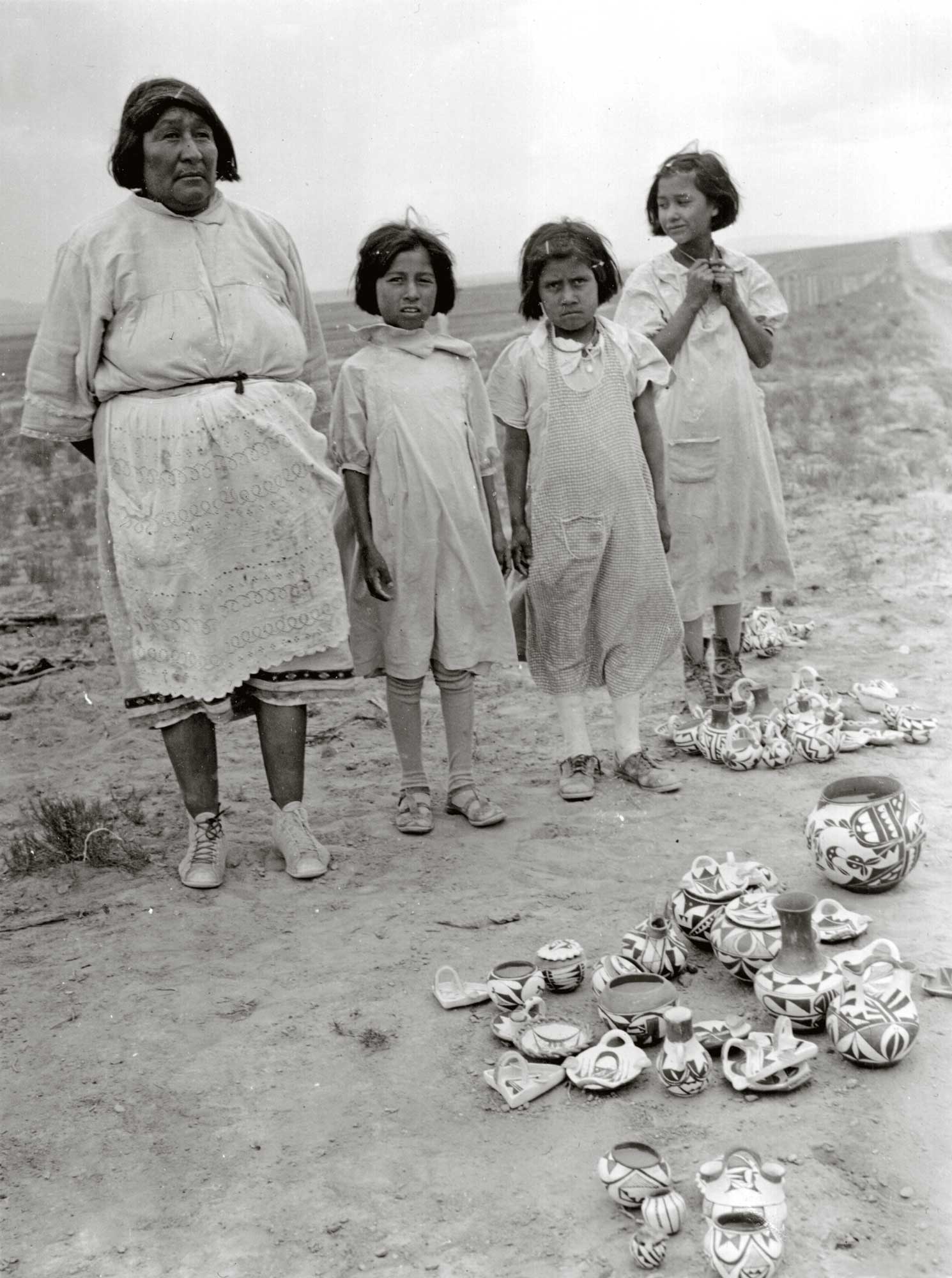 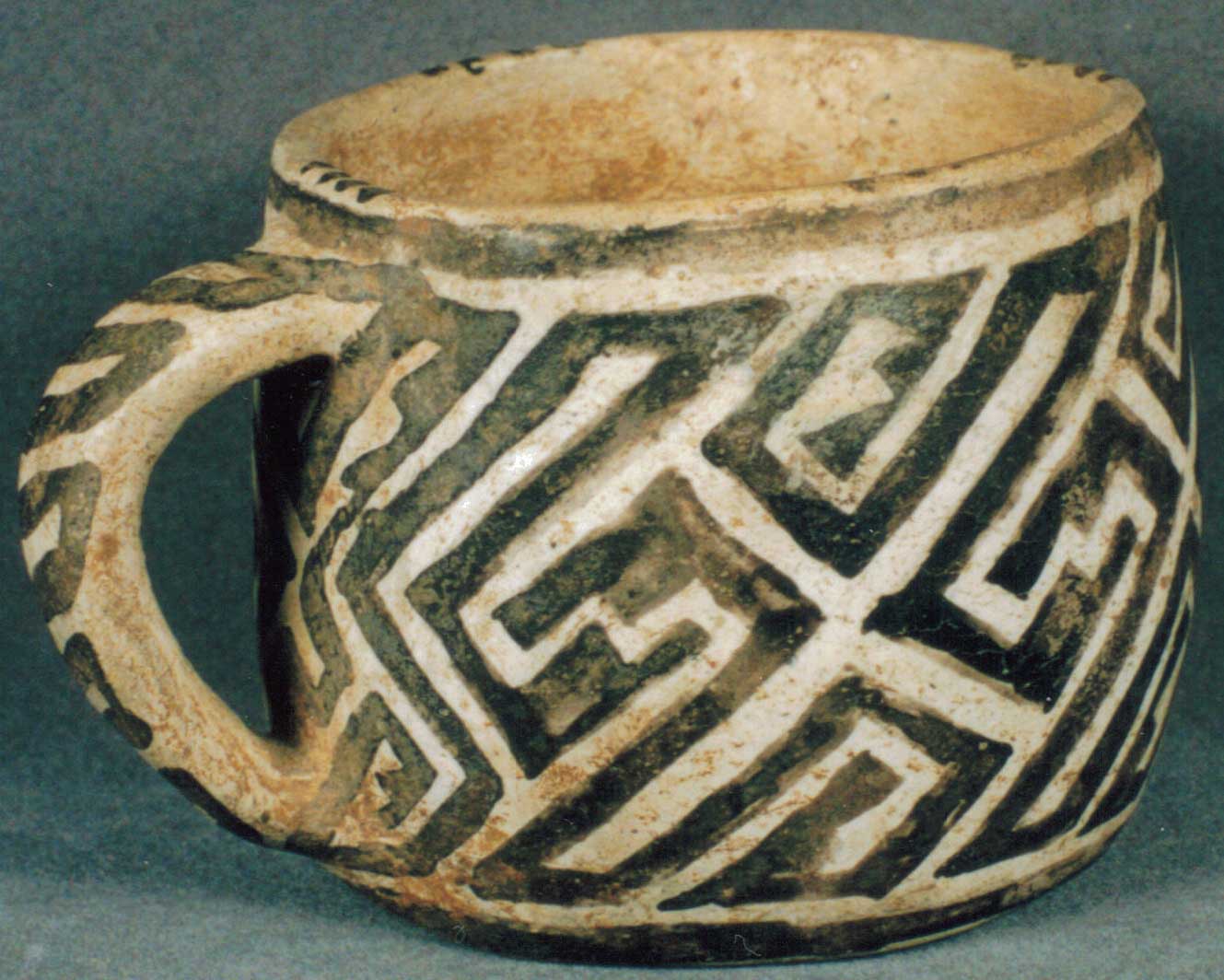 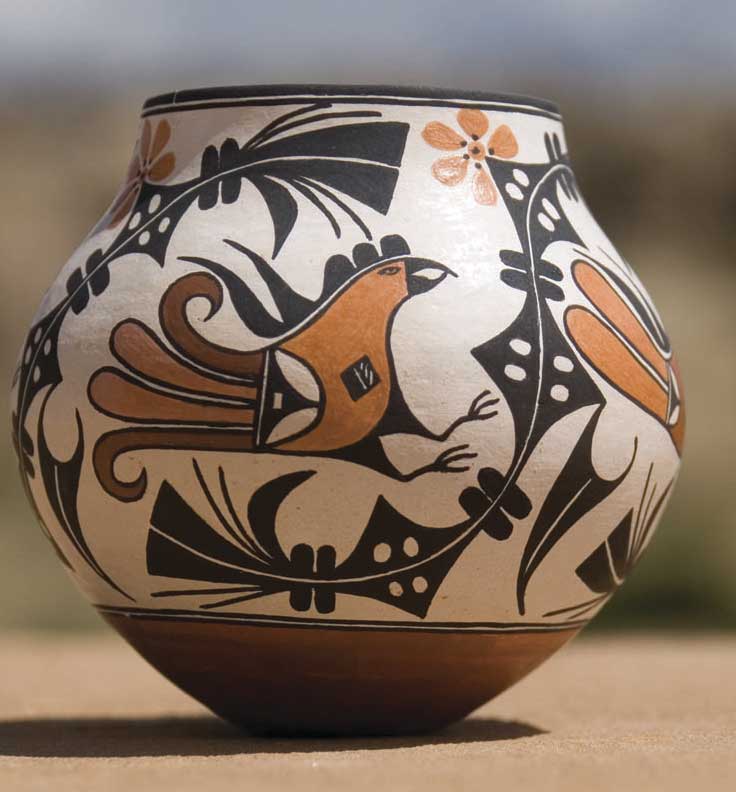 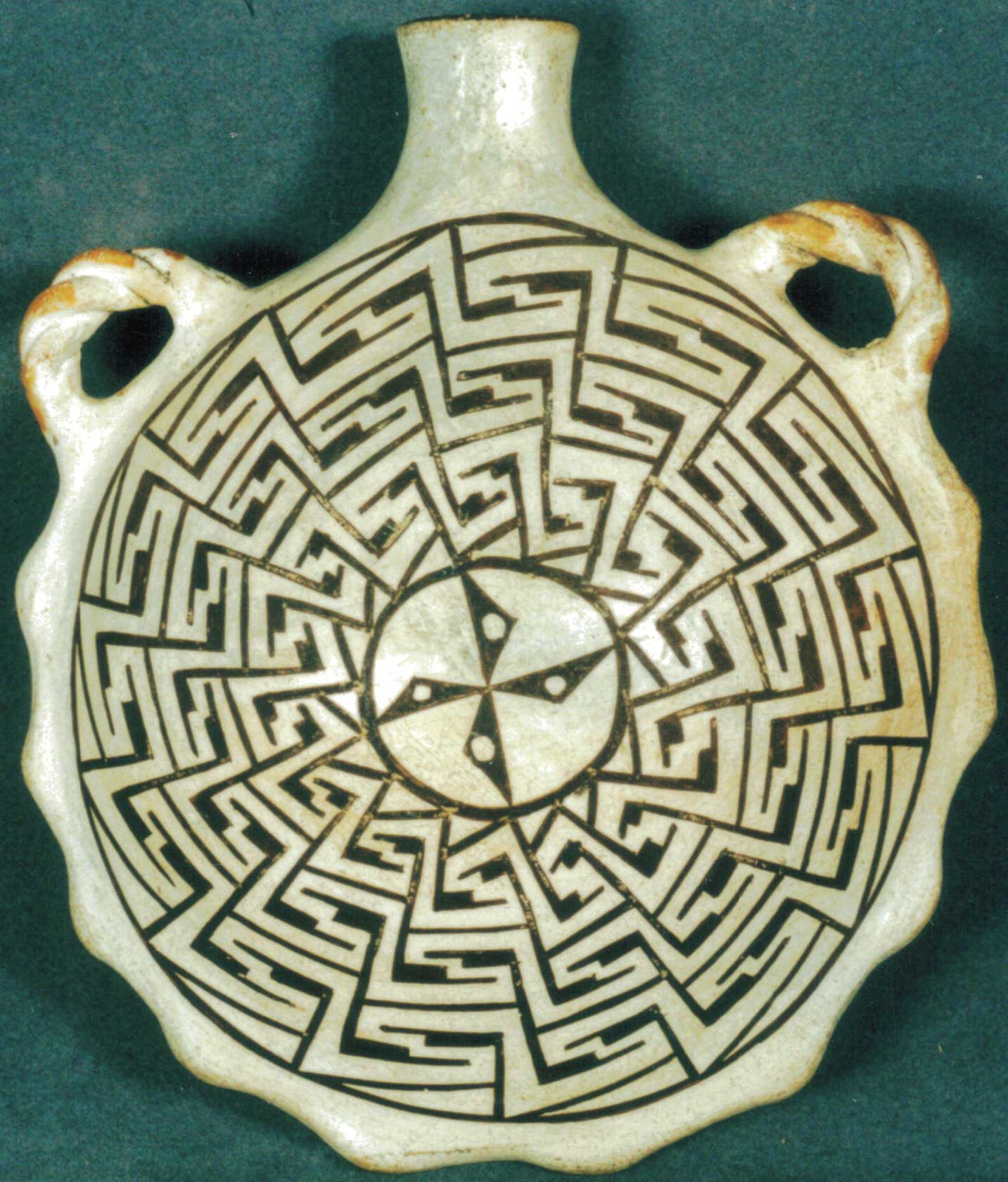 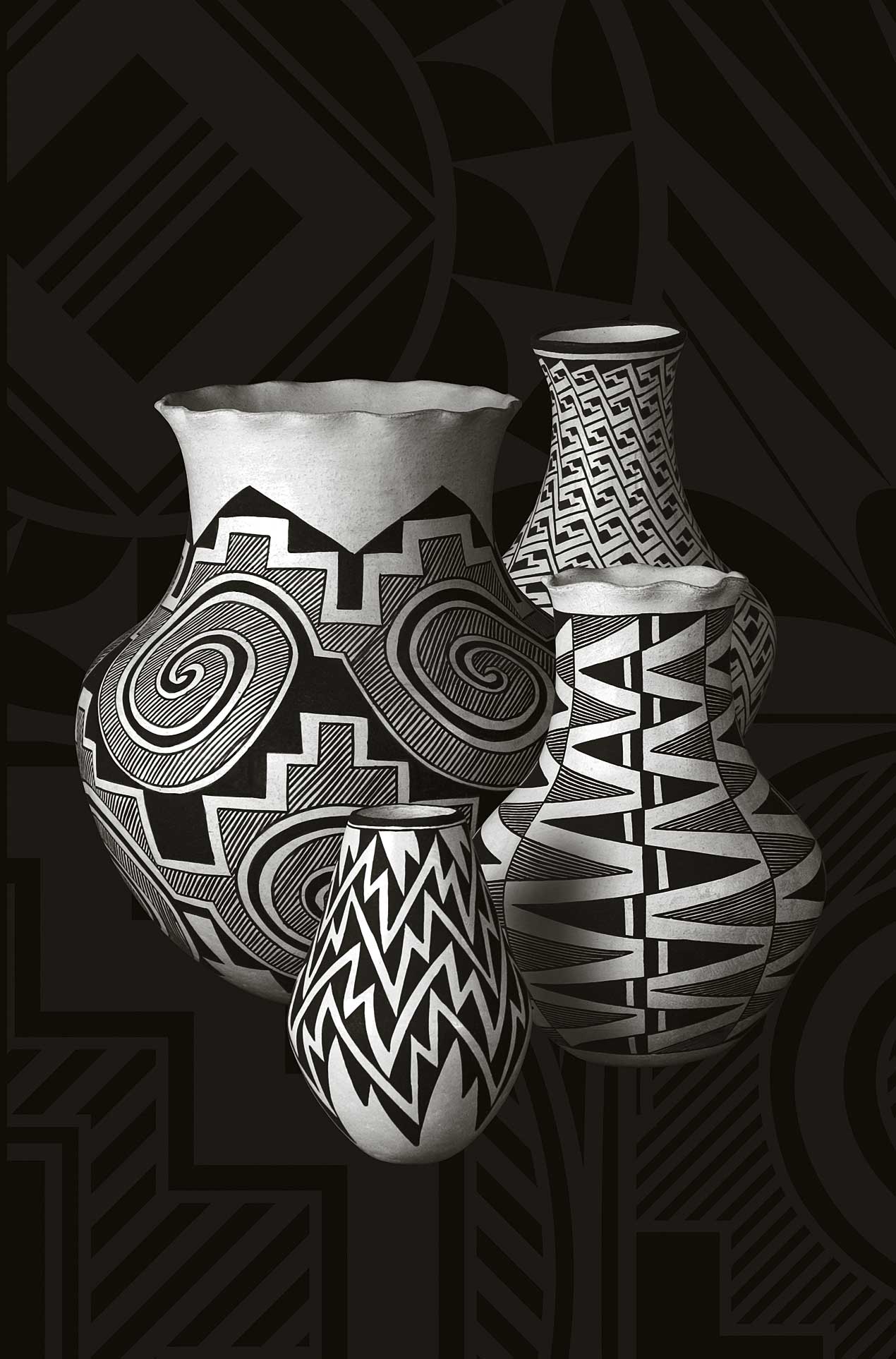 Acoma pottery is distinctive for its complexity and craftsmanship. Photo courtesy Sky City/DC-International.