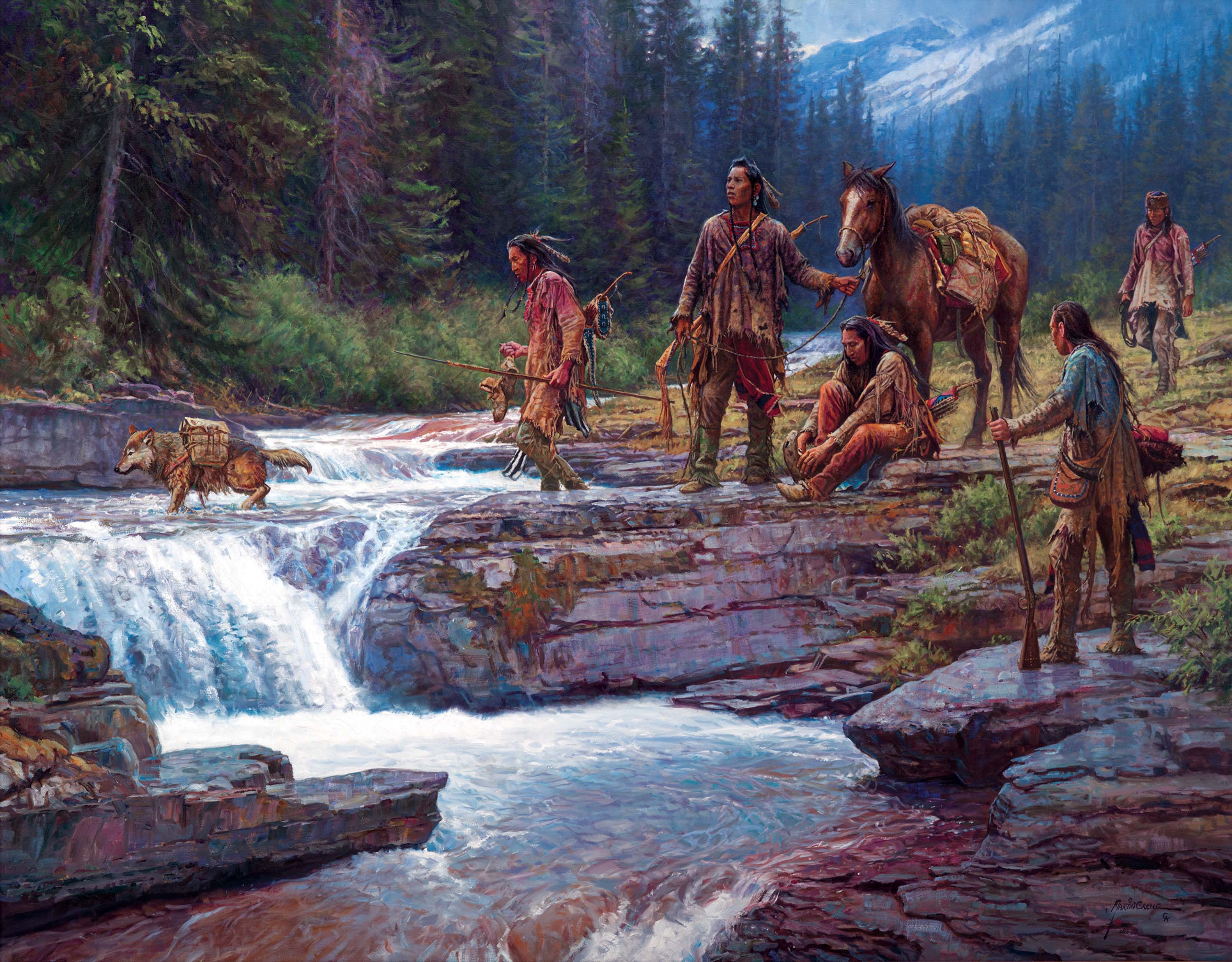 IF THE PRESENT MIRRORS THE PAST, 2014 promises to be another banner year in the life of Texas-based painter Martin Grelle (GREE-lee), who will celebrate his 60th birthday on September 17. Grelle’s down-to-earth nature and youthful countenance belie the fact that not only has he been a Prix de West Artist and a member of the Cowboy Artists of America (CAA) for nearly two decades, but he has also attained the rarified status of painters whose large works regularly command prices in the six-figure range.

Cowpunchers working their herds on the oak-and cedar-covered hillsides surrounding the family farm just outside his tiny hometown of Clifton, Texas, first inspired the fledgling artist to dream of capturing their robust spirit in paintings that might one day hang in prestigious galleries and Western museums across the United States.

Although he had been drawing and painting from the time he was a youngster and his works had begun to receive awards at local fairs, doors did not open for Grelle until 1971 when James Boren and his wife, Mary Ellen, relocated to the Clifton area. Boren had recently retired as director of the Cowboy Hall of Fame in Oklahoma City where, as one of the earliest members of the Cowboy Artists of America, he had helped facilitate the first CAA exhibition in 1966.

“At first Martin was a bit in awe of my husband’s reputation,” reflects Mary Ellen Boren. “But after meeting Jim around town on several occasions, he finally worked up the courage to ask him to look at his work. Martin was still in high school so he had no idea what a promising future lay ahead of him. However, Jim recognized the teen’s potential and decided to become his mentor answering questions and critiquing his technique. When Jim completed his new studio a few years later, he offered Martin the use of his old one, which was in the original farm-house on our place. It quickly became clear just how committed Martin was to honing his talent when we looked out to see the light burning brightly at 2 or 3 in the morning.”

Eschewing formal art training, Grelle remained in Clifton in order to help his ailing father run the family business, a distributorship for Mobil Oil Company. Boren continued to mentor the young artist’s endeavors, and another CAA artist, Melvin Warren, also lent a hand. Their encouragement was rewarded when the Texas Art Gallery in Dallas began to exhibit Grelle’s paintings, and in 1977 Grelle was invited to participate in the first exhibition of the American Indian and Cowboy Artists in San Dimas, California.

Collectors and prestigious art organizations also began to be impressed by this remarkable new talent, and in 1995 Grelle was not only invited to show his work at the Cowboy Hall of Fame in its first Prix de West Invitational, but in October of the same year, he also attained the coveted goal of membership in the CAA, which he had dreamed of and worked toward for more than 20 years.

Art aficionados now compete for the privilege of owning a Martin Grelle painting. The artist’s annual one-man exhibition at Scottsdale’s Overland Gallery is traditionally sold out, and at venues such as the Scottsdale Art Auction and the Prix de West, his paintings have set new personal highs for the artist, the most recent of which neared the half-million-dollar mark. His paintings are also being offered for resale at several New York galleries and even at Sotheby’s auctions.

Because Grelle originals are in such high demand, Larry Smith, owner and CEO of Somerset Fine Art, relates that many who admire the artist’s work have found a satisfactory alternative in the form of giclées — limited-edition reproductions printed on fine-art canvas or watercolor paper. Smith explains, “The giclée printing process is of such high quality and most works are printed on canvas so the final product closely resembles the original painting. In fact, our Grand Edition giclée of Martin’s newest release, Passage at Falling Waters, which measures 40 by 50 inches, varies only slightly in size from the original masterwork. When tastefully framed, these prints definitely represent a very desirable piece of art.”

Insightful observations as to this unprecedented popularity of Grelle’s work come from Trudy Hays, director of Overland Gallery of Fine Art, Grelle’s exclusive gallery. “Martin is an incredible figure painter as well as being a phenomenal landscapist; he is equally competent at rendering both cowboy and Native American subjects. I believe it is this amazing diversity of abilities which really distinguishes his work,” she says.

“Martin is also an exciting storyteller who manages to develop a strong individual narrative behind each composition. He does a great deal of research before beginning a piece to make certain it is as historically accurate as he can make it. Like a good writer, Martin then fleshes out his story with intricate details, making certain the dress and landscapes are appropriate to the period, and even going beyond that, revealing to the viewer what the subjects are doing and why. His incomparable use of light and texture brings the narrative to life, giving his work a very painterly quality,” offers Hays.

Early in his career, Grelle painted the subject matter he knew best: the working cowboy. However, as he traveled further afield, stories of the Native American began to challenge his imagination. Much of his recent work is set from the latter years of the fur trade era through the 1850s. Ideas also come from visits to southeastern Montana where he takes advantage of photo shoots with Native American models, primarily members the Apsaalooke (Crow) tribe. He emphasizes, “I don’t like scenes that look too posed, so some of the best ideas have come from candid photos taken in between photo shoots.”

During the past four decades, Grelle has garnered an impressive list of honors including People’s Choice Awards, a Ray Swanson Memorial Award and a Silver Award at the annual CAA exhibitions, as well as being a winner of the Buyers’ Choice Awards at both the CAA and the Prix de West. He is also one of only seven artists to be a double recipient of the coveted Prix de West Purchase Award, which places the artist’s painting in the permanent collection of the National Cowboy & Western Heritage Museum.

While these awards have placed him in the category of being one of the nation’s most sought-after Western artists, Grelle regards being the father of two sons, now pursuing their own dreams, as his most rewarding accomplishment.

Neither has success diminished Grelle’s innate sense of loyalty and gratitude toward friends and those who have “brung him” over the scope of his career. Bubbling over with pride, Mrs. Boren shares, “Everybody in Clifton just loves Martin.” This reality was evidenced by the fact that more than two dozen Clifton area residents traveled to Tulsa, Oklahoma, in May 2013 to attend the opening of a joint retrospective exhibition Grelle shared with fellow CAA member, Herb Mignery.

Because he strongly believes his talent is a gift entrusted to him by God which must be shared and not taken for granted, Grelle strives to pass on what he has received from others. To accomplish this, he has not only given numerous demonstrations and donated work to a large number of charitable organizations, but for the past 22 years, he and fellow CA Bruce Greene have taught an annual workshop, mentoring aspiring artists. Grelle is also currently president of the Joe Beeler Foundation, an educational nonprofit that offers scholarships to students who are interested in working in the Western genre.

As the newly installed president of CAA, Grelle is working with a number of others to implement plans for the organization’s 50th anniversary in October 2015. A few events under consideration for the landmark celebration include a retrospective exhibition to accompany the 50th-annual show and sale, as well as the publication of a new CAA book, written by Byron Price, which will document the group’s history over the past half century.

Grelle enthuses, “I’m very excited about this challenge. In perspective, we are truly a legendary group. Just look at the list of artists who have put the CA brand by their name over the past 50 years. No other group of artists has remained together for that long, and to my knowledge, we are the only group of living artists which has ever had a museum (the former CA Museum in Kerrville, Texas) built to honor their work. The founding members of the CA started an organization that has been a driving force in saving representational art in this country. Western aficionados, even up through the 1990s, realized this was a huge accomplishment, but many from the current generation are not aware of who we are and why we are still here. My mission is to get that message out.”

There is little doubt that Grelle’s message will ring out loud and clear as he continues to immortalize the history, beauty and timelessness of the American West in paintings that are well on their way to becoming masterworks of the 21st century. 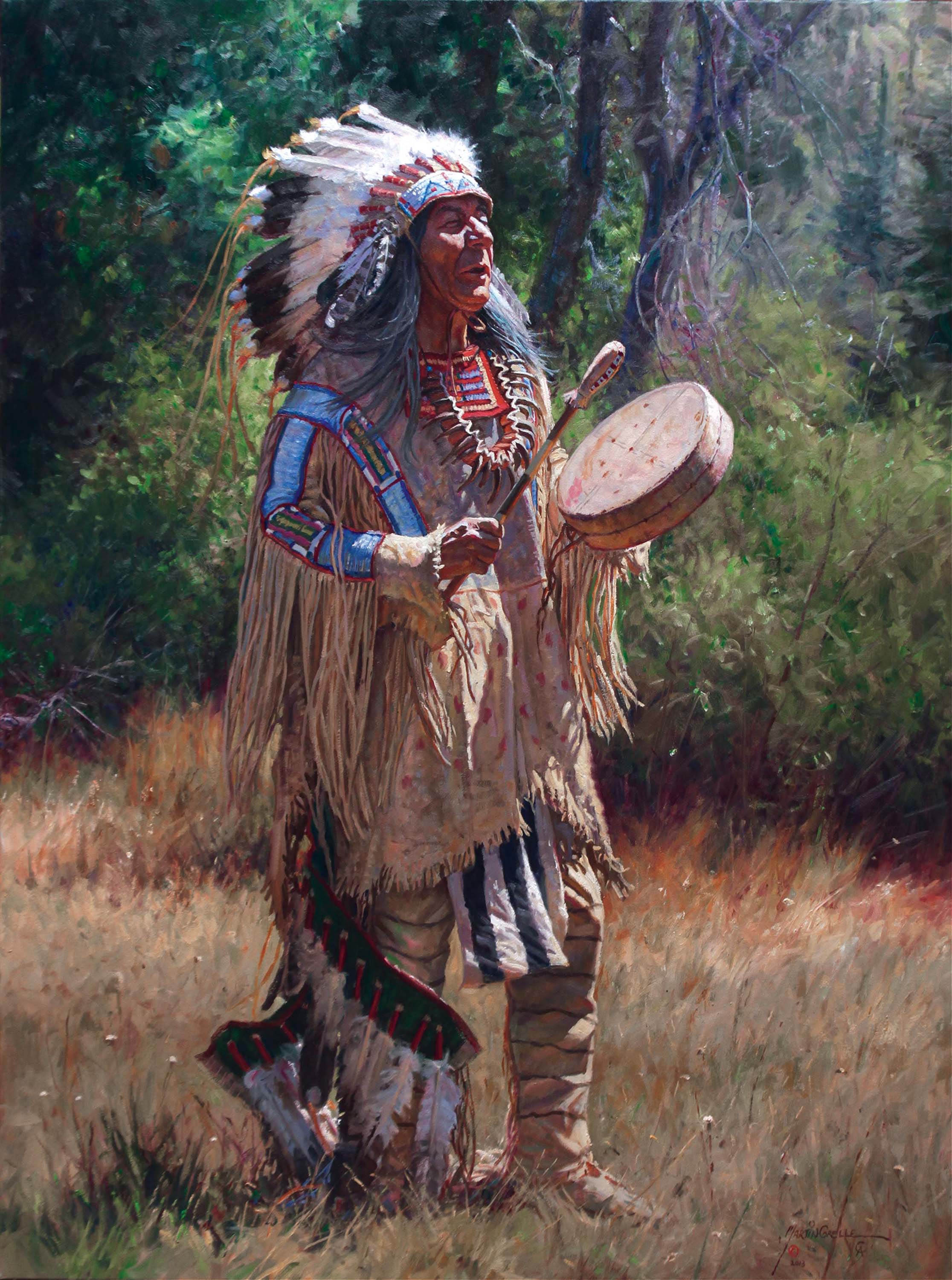 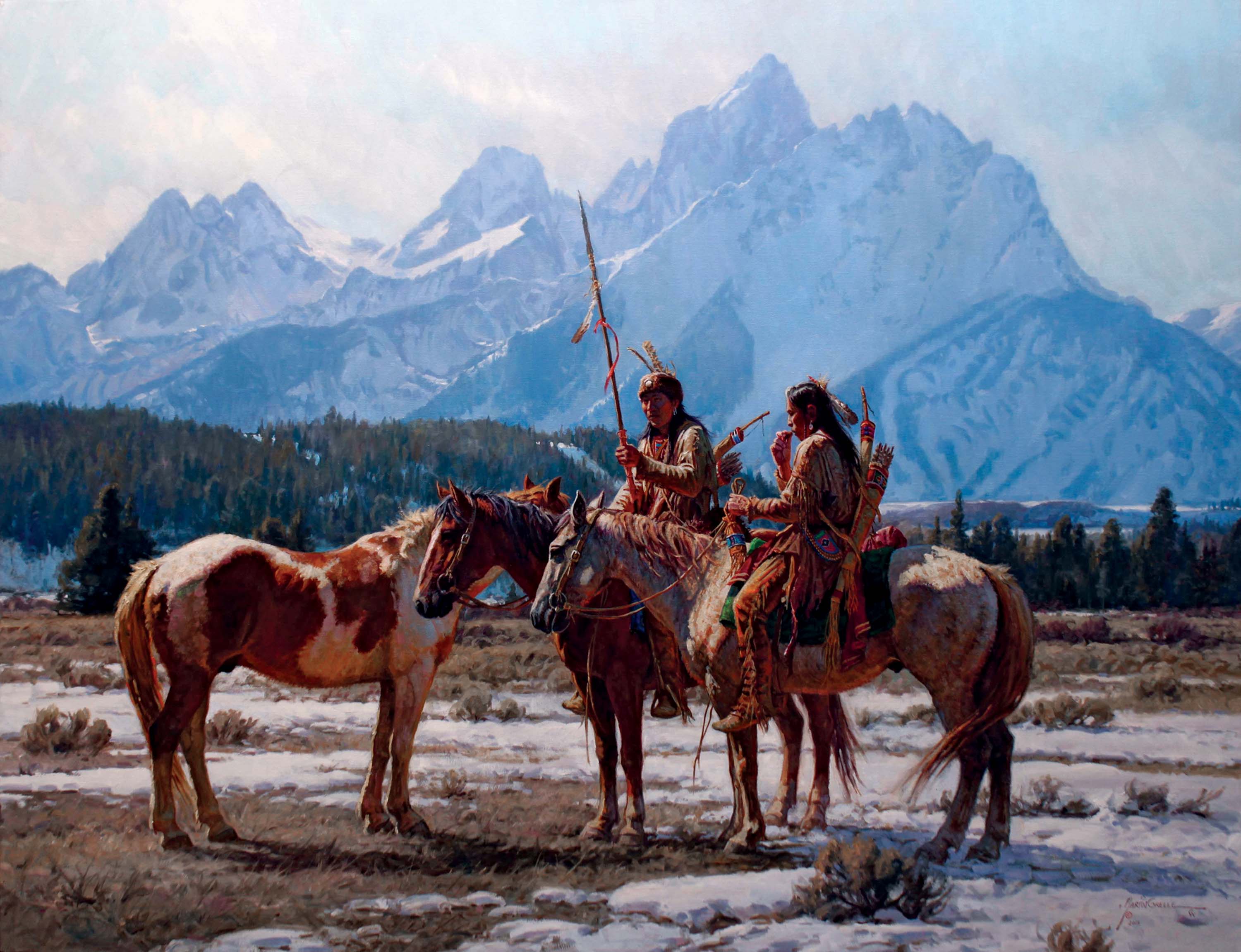 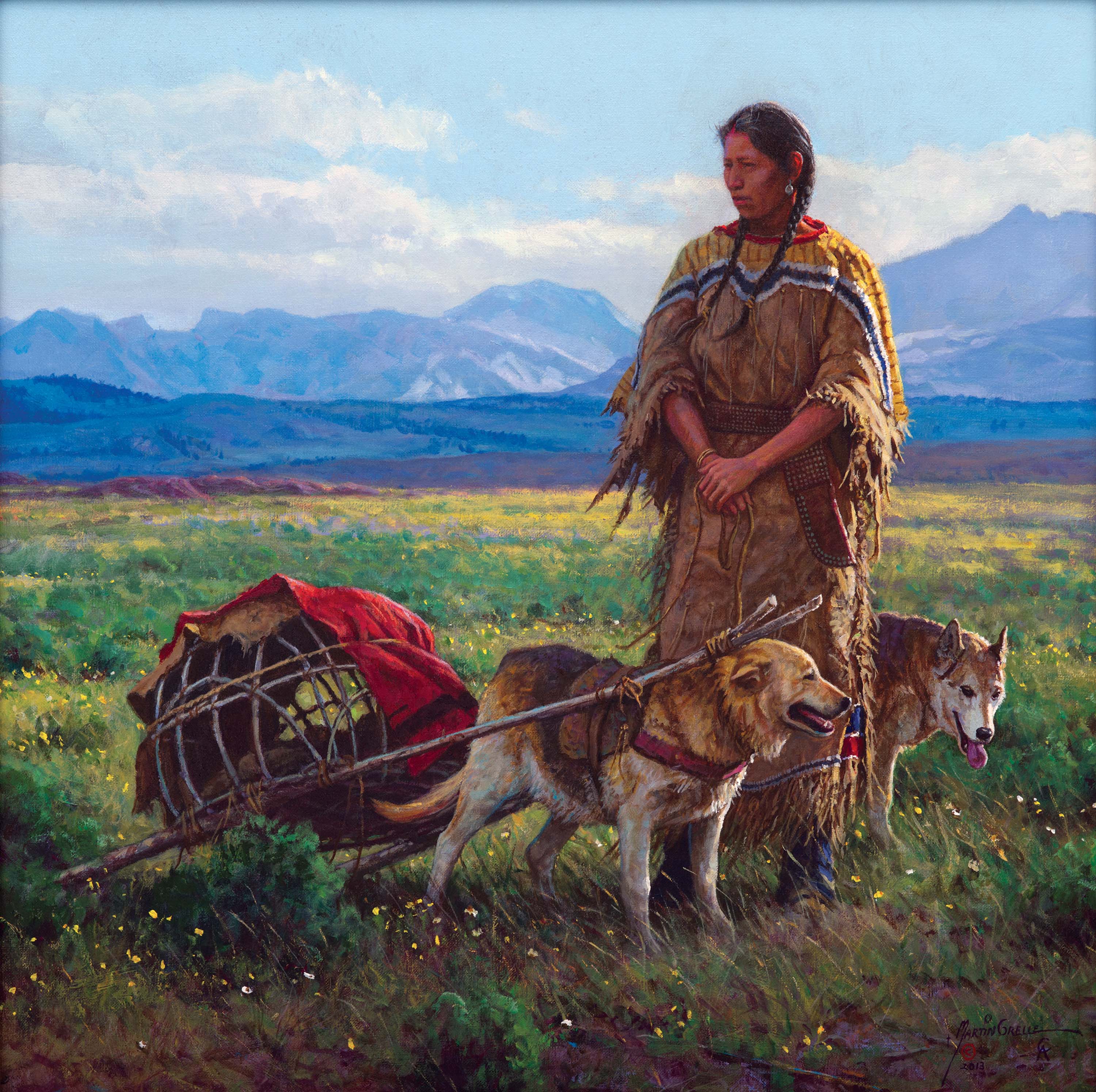