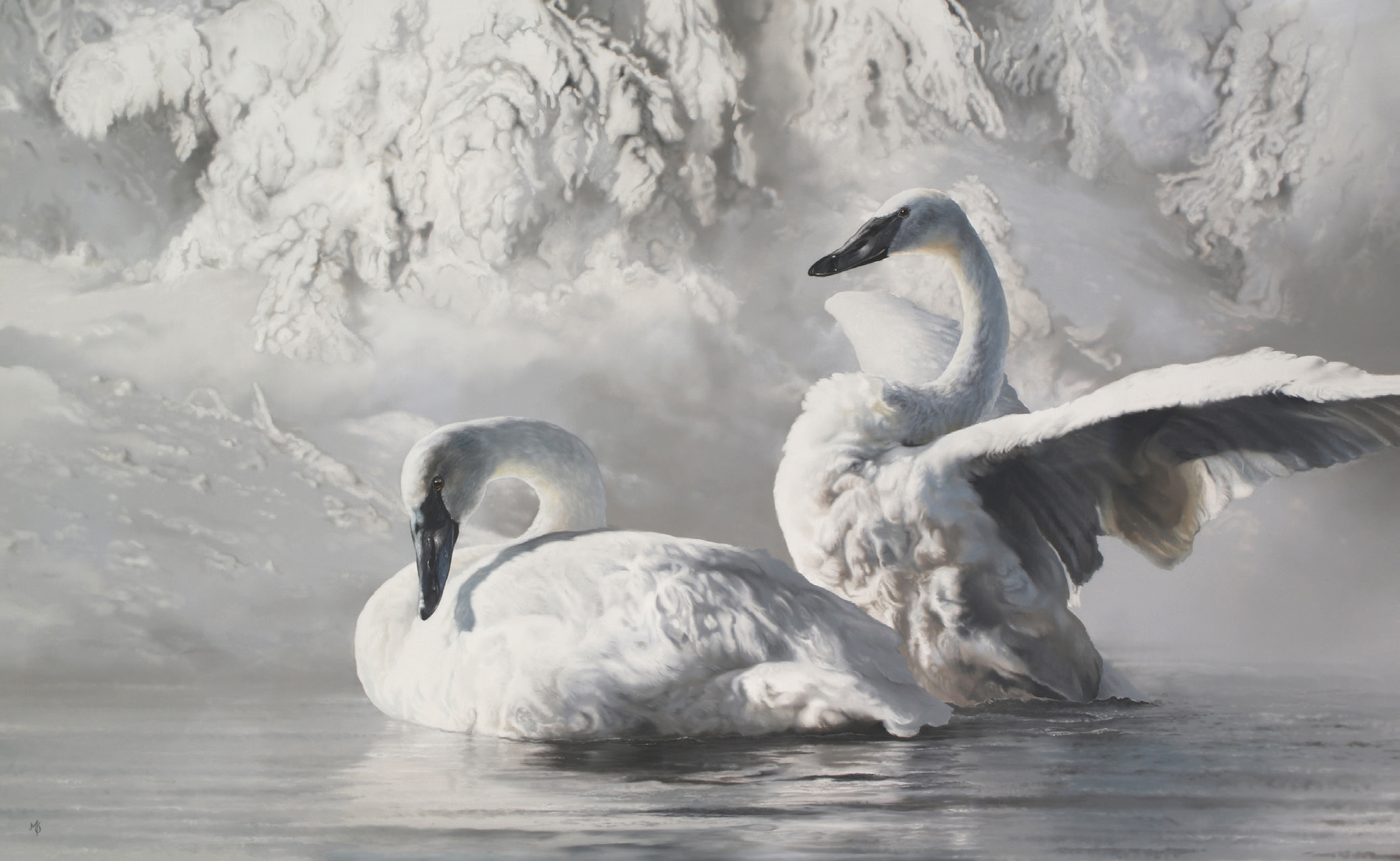 07 Jan The Tension Beneath the Surface

Mark Kelso is an artist’s artist: he’s one of those rare and talented people who’s good at everything he does, which some might find annoying if he wasn’t also one of the most charming and engaging personalities you’ll ever meet. Hailed as one of the best photorealist painters alive today, he’s equally adept at other styles, and in fact, he’s accomplished in other artforms entirely, including dance. He’s also an expert in martial arts, and he’s won more than 40 national and international titles in baton twirling.

Kelso was born in 1967 into a family of artists in Indianapolis, Indiana. “My mother was a professional dance teacher,” he says, “and my grandmother, who was an artist herself, always kept me supplied with materials when I was a kid, so I always had the opportunity. In that sense, I guess I have always been an artist.” 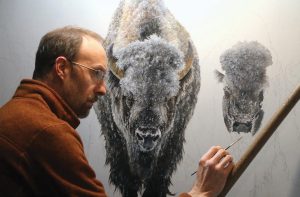 He earned a bachelor’s degree from the Herron School of Art and Design in Indianapolis, which his grandmother also attended. By the time he graduated, Kelso had developed an enduring aesthetic that integrated philosophical and environmentally oriented subject matter, which led to his Western wildlife work.

“Nature has always been a key part of my interaction with the world, so painting wildlife and natural scenes makes sense to me,” Kelso says.

In 2015, a visit to Yellowstone National Park crystallized for Kelso a semi-spiritual experience that began with visits to Glacier and Yosemite parks and the Olympic Peninsula in Washington. “Starting around 2000, I made light visits to the Olympic rainforest, Yosemite, and Joshua Tree, but I really began to immerse myself in the West with that visit to Yellowstone,” he says.
That experience came at the urging of two fellow artists, Ray Brown and Dustin Van Wechel. “We were all in Cody for the Buffalo Bill Show,” Kelso says. “These guys couldn’t believe I had never been to Yellowstone, so we piled into a car and drove over.” 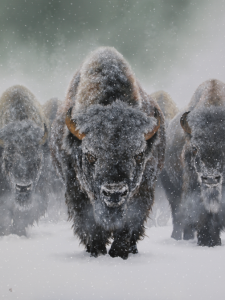 For the last five years, Kelso has focused primarily on painting Western scenes, but he also gives new meaning to the epithet “Renaissance man” because his diverse interests and mastery of entire genres surpass expectations. For example, in addition to hyperreal renditions of exotic jungle creatures, palpable depictions of raging seascapes, and photorealist paintings of bison rimed with autumn frost, Kelso has also achieved notoriety for his Lego still lifes — yes, Legos.

“I’m a bit of a Legoholic — I have an entire room devoted to them,” Kelso says with a laugh. “Yes, if you Google my name and ‘Legos,’ you can find a whole series of paintings I did.”

In Kelso’s mind, it all connects. “Honestly, it doesn’t make much difference to me — florals, figurative, fantasy — the creative core is the same, the same aesthetic.” 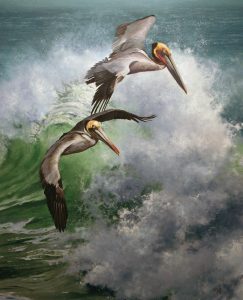 “I think one of the most interesting things about Mark is the breadth of genres and styles he is accomplished at and interested in,” Van Wechel says. “He can do things from a very abstract bent to the other extreme of hyperrealism. But over the last five or six years, he’s settled into a nice place where he can take some of the traits of the more abstract stuff and merge that into his realist work, which really translates well into his Western art.”

ason Stone, gallery director at Reinert Gallery in Charleston, South Carolina, describes Kelso as one of the country’s premier wildlife and seascape artists. The gallery began representing Kelso after he was selected to participate in the 2015 Southeastern Wildlife Exposition in Charleston, South Carolina. “We were very enthusiastic about connecting with him. We knew he would have great appeal simply because of his inimitable style and technique,” Stone says. “We see six or seven paintings a year. We understand he can spend three or four months on a single work of art. And clients can see that level of care in his paintings.”

Stone points to another notable moment in Kelso’s career when he participated in an exhibition at the National Museum of Natural Science in Taipei, Taiwan, in 2000, with a painting called The Eternal. The image captures the movement and mood of the sea breaking against cliffs so vividly that the viewer can practically feel the salt spray in the air. Kelso spent nine months on The Eternal, including several weeks painting on location. “It was a phenomenal experience,” Kelso says. “I was honored to represent the United States at this show designed to promote environmental awareness. It involved a lot of state dignitaries, including the vice president. And it was my first sell-out show.”

For Kelso, this diverse and egalitarian array of interests and talents all coalesce around a common, almost Jungian, theme. “What I gravitate to is the choreography at the heart of it all, a creative impulse that reflects my interest in archetypal themes and subjects,” he says.

Stone notes that this aesthetic extends to the artist himself: “Like his art, his wit and humor are unparalleled. He’s just the most interesting person.” 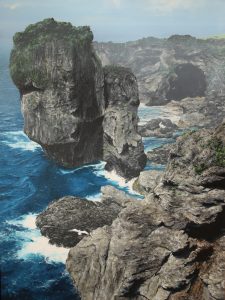 Kelso’s diverse interests are further underscored when he talks about the influences and artists he admires. “Hands down, my favorite artist is Frank Frazetta,” he says. “Not just the technique, but the subject matter: heroic figures, both male and female, archetypal depictions at the perimeter of reality. Of course, I love Caravaggio and DaVinci and Vermeer also, but Frazetta taps right into the mysterious.”

Though it may not be instantly obvious, after hearing Kelso explain his enthusiasm for the “godfather” of fantasy art (Frazetta is chiefly famous for painting the covers of the Conan the Barbarian publications in the ‘70s and illustrating comic books), one begins to see the subtle hints of influence. Take a painting like Snow Angels, for example. Despite the preponderance of white in the image, there’s a slight undercurrent of darkness, an understated yin-yang that encapsulates right and wrong, male and female, and a host of other presumed binaries that operate just below the surface of things — including stately swans in a sublime natural setting. Though much of Kelso’s work depicts primal animals in natural settings with no hint of humans around, his paintings nevertheless tap into the heart of the humanities and the universal urge to anthropomorphize nature. 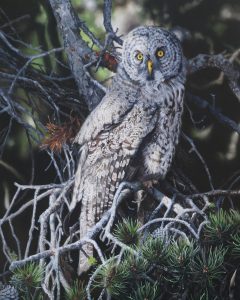 While some refer to Kelso’s work as “photorealism” or “hyperrealism,” Kelso prefers “realism.” “I paint realistically, of course, but I try to tweak it a bit so that it isn’t just like copying a photo. I want to bring out the depth that exists in reality more than in the photo,” he says.

Over the last two decades, Kelso’s resume has swelled with awards and honors. His artwork has hung in more than 100 museums around the world. In 2002, he was the featured artist for a special exhibition at the National Geographic Society in Washington, D.C. More recently, he won the 2021 Spirit of the Buffalo Bill Art Show & Sale Award at the Buffalo Bill Center in Cody, Wyoming. And he won three top awards at the Eiteljorg Museum’s 2021 Quest for the West show, including the purchase award, people’s choice award, and artist’s choice award. 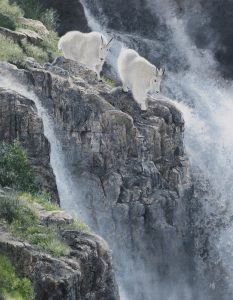 Perhaps the key to Kelso’s mastery of Western wildlife painting is his instinct for discerning the dance that operates at the core of the natural world, the tension that hums beneath the placid surface of the wild landscape.