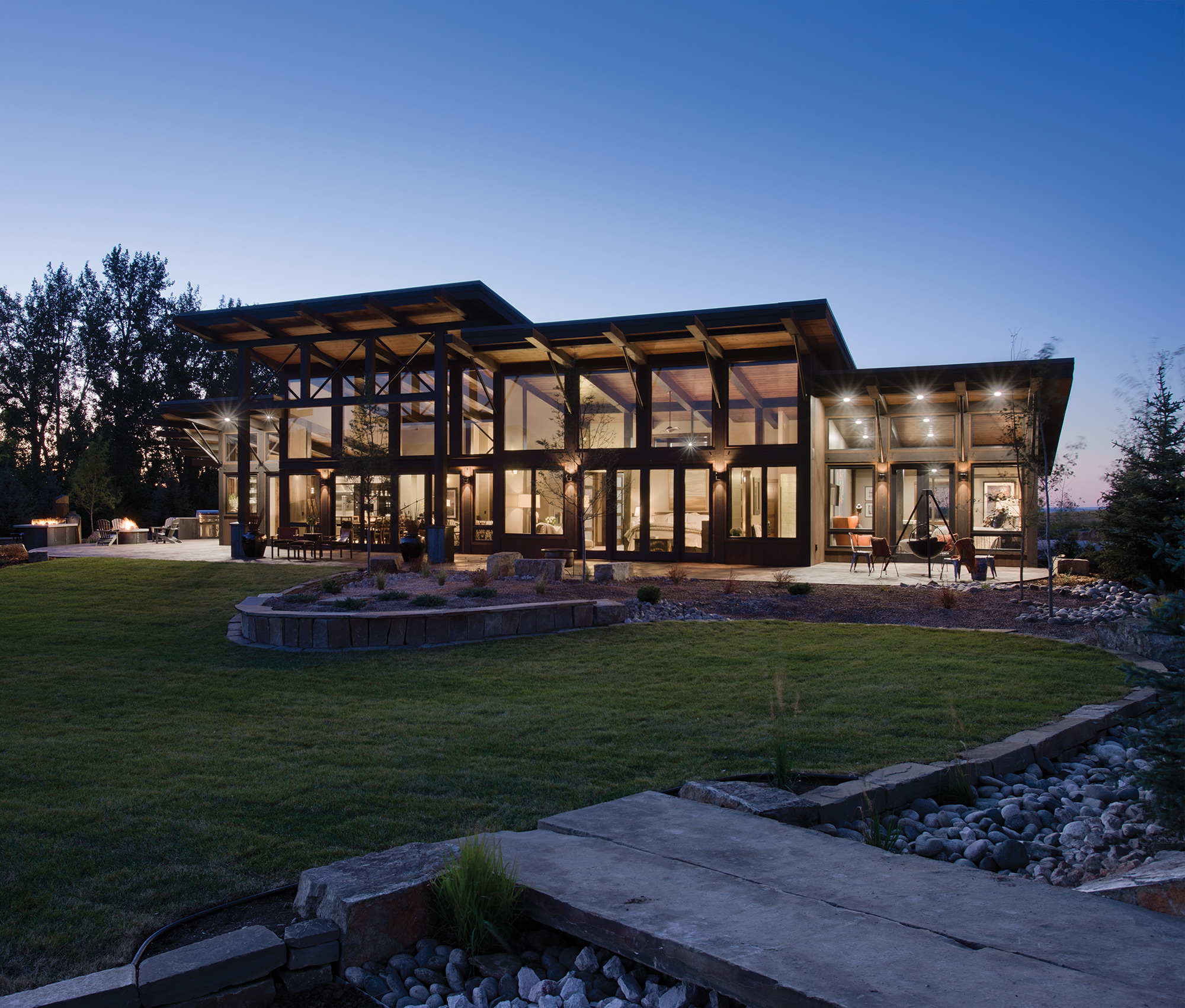 A rock retaining wall surrounds the upper lawn and creates a distinct yard; every room in this Montana home connects to the outdoors. Right: A welcoming entry makes an inviting first impression. Many of the design elements used on the exterior appear in the interior.

TUCKED AWAY AT THE END of a pasture on her family’s ranch, Roxie Simpson’s home in Roscoe, Montana, is a welcoming blend of timber, steel, glass and stone. Overlooking the Rosebud River, lined with 100-year-old cottonwood trees, the home was designed with the landscape in mind.

“The home sits low on the property where it does not compete with its surroundings,” says Tim Brock, architectural designer at M.T.N. Design. “It is specifically positioned to take advantage of the great views of Silver Run, Sylvan and Granite peaks, in the Beartooth Mountains.”

The concept for the striking 3,000-square-foot home was happenstance. Simpson was seeking a design that would harmonize with the property’s raw and rugged surroundings yet still be modern and elegant, when she stumbled across an ad for PrecisionCraft’s Mountain Modern series. At that moment, she realized she had found the perfect inspiration for her getaway home.

“I’ve always loved timber framing, but I’m also very modern,” Simpson says. “I loved the way the concept blended the two. I was also drawn to the large, open floorplan and the wall of floor-to-ceiling windows that allow the outdoors in.”

M.T.N Design creates architectural concepts for PrecisionCraft, which specializes in manufacturing log and timber homes. Clients can either choose a floorplan to customize or create an original design.
Using the Cascade design concept as a foundation, the team went to work designing a mountain modern weekend retreat for Simpson and her daughter. The result? Two well-appointed master suites, a large, open great room, and an interior-exterior living plan ideal for entertaining.

“Timber framing has been used for centuries to help create open interior spaces, most notably in churches and barns,” says Stephanie Johnson, PrecisionCraft’s marketing manager. “Using the beauty of timber framing in modern design not only allows for the types of open interiors that so many people are drawn to, it also adds a natural sense of warmth and texture.”

Johnson’s favorite aspect of the home is the indoor-outdoor integration. “I think Tim did an excellent job of creating a layout that easily flows into the outdoor patio spaces, whether it was from one of the bedrooms, the great room [with its] sliding wall or the kitchen,” Johnson says.
Inside, the house continues to reveal its warm character and artistic personality. Unobstructed panoramic views make it feel as if the house has become part of its surroundings.

“Roxie didn’t want to block the views in the kitchen,” Brock says. “So there are no upper cabinets for storage.” To get the best of both worlds, the team added open shelving made of thick slabs of glass to the west-facing windows.

“The whole house is oriented in the right direction — its focus is the red barn and the mountains,” says Jeremiah Young, creative director of Kibler & Kirch, the interior design studio charged with planning the home’s interiors. “It’s like one big, gigantic painting.”

Two large fireplaces — one in the main living area, the second in Simpson’s bedroom — are built from steel and concrete by Back Alley Metals and James McGregor Designs of Red Lodge, Montana.
“What’s cool about the fireplaces is that they are fabricated of really cold metal and concrete, but they are not intimidating or imposing at all,” Young says. “They’re subtle and quiet in their own ways.”

Art plays a significant role throughout the space. In fact, Simpson’s daughter’s bedroom was designed completely around an Aaron Friedman painting she bought while living in New York City.

“While not its formal name, I like to call it ‘Where Street Art Meets the West,,” jokes Simpson.

Beneath the dining room table sits a colorful handwoven rug made by women from the Bani Hamida tribe in Jordan. Beside it, a painting by Simpson’s father, George Gee, sits on an easel given to him by artist LeRoy Greene. In the living room, a Ben Pease painting of Native Americans wearing colorful tennis shoes hangs above a pair of gold chairs.

“Like Roxie, the house is vibrant and cheerful. It has a big personality, but it is also a place to rest,” Young says. “Sure, it’s colorful, but so is the surrounding landscape. Outside is an explosion of color that’s been integrated into the house.”

The interior design of a home is an intimate thing, Young explains, adding that his firm worked hand in hand with Simpson. “She loves the details because she was involved in creating those details. Quite often — especially in Roxie’s case — it results in more than your typical client-design relationship, it becomes a friendship. Roxie is definitely part of the Kibler & Kirch family.” 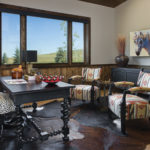 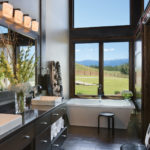 A freestanding hydrotherapy tub allows the homeowner to relax, unwind and stargaze without going outside. 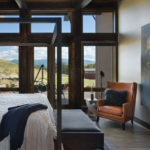 Access to the outdoors adds to the livability of the home’s design. 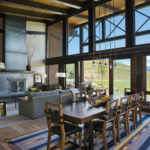 The open great room is ideal for entertaining and looks out over the Montana landscape. 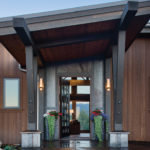 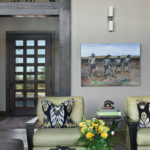 Montana artist Ben Pease painted the work that hangs above the paired chairs. 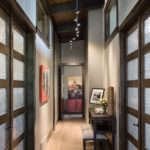 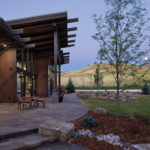 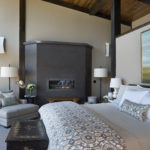 A steel and concrete fireplace is an architectural element that’s both minimal and comforting. 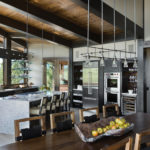 The kitchen is designed to maximize views without compromising function.