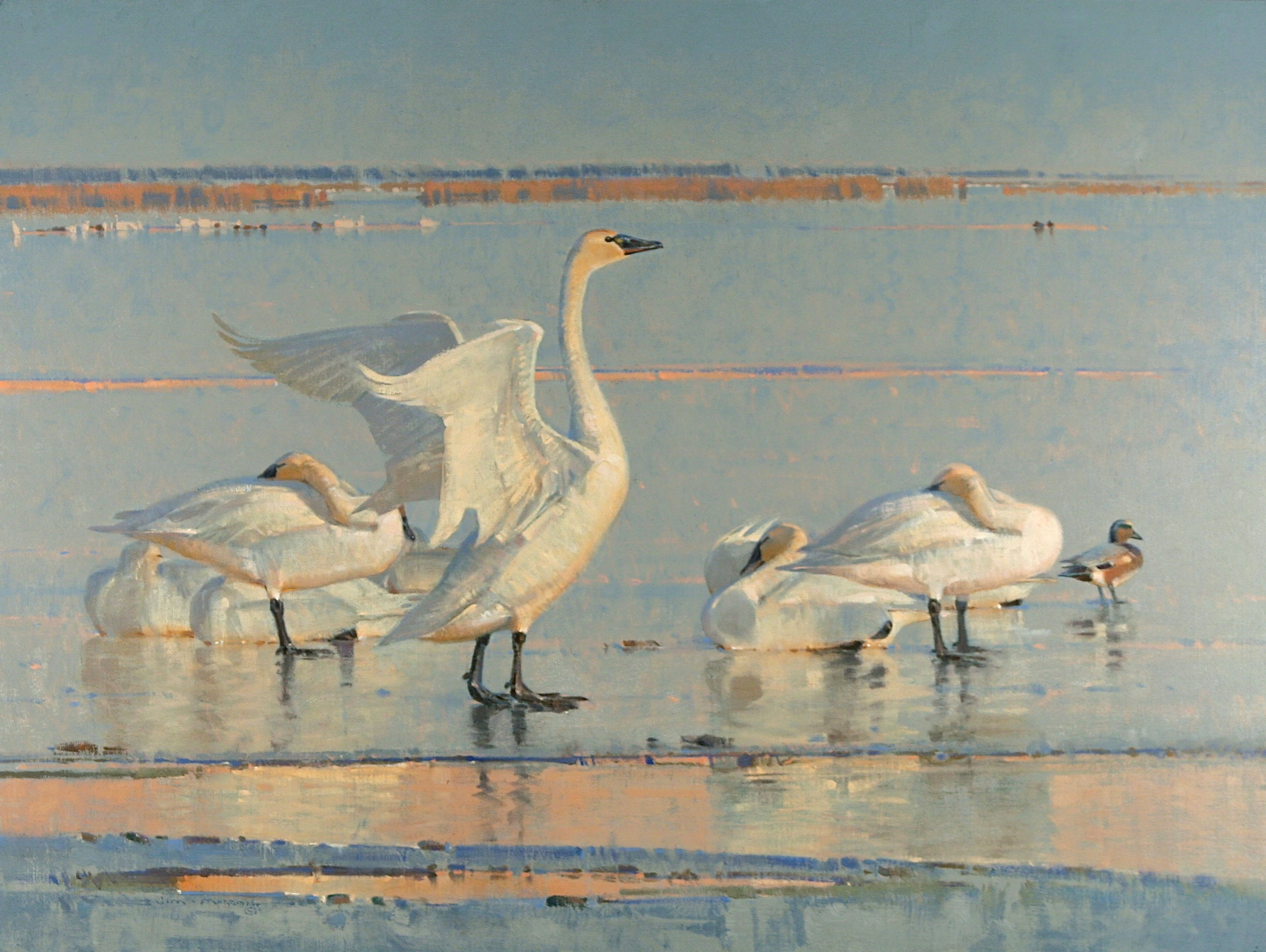 JIM MORGAN IS A FAULTLESS MASTER OF COY. His reserve isn’t a put-on the way it is for some; it’s intrinsic to his inconspicuous being.

Morgan inhabits a headspace that is constantly adrift in the unspoken language of landscape. And when, at last, after several attempts to draw him out prove unsuccessful, he finally acquiesces to his interrogator with a response to an impossible question: “What does the native West mean to you?”

Morgan clears his throat, bashfully uncertain if what he’s about to say will hold any merit, and then shares this little stream of consciousness: “I rise for the smell and color of wet sagebrush following a rain or after the snow melts. I still get excited finding a chip of obsidian out in the middle of nowhere that was touched by someone, who knows how long ago — it makes me wonder what they were thinking when they held it in their hands,” he says.

“I like saying goodbye to departing sandhill cranes in the fall as they lift off and pass overhead toward their southern wintering grounds. I love the long light of a winter day, and observing sage-grouse on their leks in spring, strutting their pride and impressing hens that will be mothering the next generation of endangered birds.”

“Now that you ask,” he adds, wryly, “I could probably come up with a 1,000-word list of my favorite things about the West and recite them for you, but they’d have no particular order.”

For an instant, we’ve just been offered a heartfelt glimpse into Morgan’s sense-driven mindfulness, encountering the intersection where mere words only begin to hint at the heightened aesthetic awareness flowing through his paintings.

This fall, Morgan’s profile is elevated. His work is appearing at the prestigious Birds in Art show hosted by the Leigh Yawkey Woodson Art Museum where he’s counted among an uncommon club of “Master Artists.” He has another piece at the National Museum of Wildlife Art’s Wild 100 event in Jackson Hole and, most notably, he is among a handful of artists (along with the late Bob Kuhn and Ken Carlson, Ken Bunn, Tucker Smith, Walter Matia and Tim Shinabarger) featured at the Woolaroc Museum’s much-anticipated retrospective, Best of the Best Contemporary Wildlife Art.

“What I experience in viewing Jim’s paintings is someone who has a deep connection with the earth,” says George Carlson, two-time winner of the Prix de West. In Morgan, he adds, he embraces a philosophical kindred. “Jim’s firsthand knowledge of nature informs his works, and yet he transforms his reality into quiet calm and subtle shapes and patterns that engage the eye in their abstractedness.”

Morgan’s been called “an artist’s artist” and at nearly all of the major Western art shows he’s received artist choice honors, including the Robert Lougheed Memorial Award at Prix de West.

The power of Morgan’s blend of realism and impressionistic interpretation resides in his understatement, a total devotion to toning down and harmonizing his palette rather than gratuitously amping up. Color is diffuse so that the viewer can feel, as he does, the space of atmosphere.

“He achieves these wonderful ethereal effects and how he does it is a marvelous subconscious thing,” Carlson says. “Painting while in that zone is tricky. It involves almost a kind of Zen because you can’t think about what you’re doing. You are purely responding and then channeling. If you get too conscious, then what you are communicating becomes contrived. It’s a delicate dividing line that he doesn’t cross.”

Morgan isn’t interested in reproducing the landscapes he encounters as much as being an antennae to what they are pulsing. “There is an unexplainable energy that emanates from nature and it becomes visible in great art,” he says. “It’s what strikes me in the work of other artists.”

Over the years, I asked the late Bob Kuhn to name a few of the younger painters who had his attention. “If you want to see some exciting work, I’d say go look at what Jim Morgan is doing. It’s original and it’s gutsy,” he said.

Morgan, who spent some days in the field watching wildlife with Kuhn, subscribes to a Kuhn mantra that has never left him: “If you know it’s right but it looks wrong, it’s wrong. But if you know it’s wrong and it looks right, then it’s right.” The point is that only through experimentation and being willing to bend hard and fast rules, distorting them and sometimes breaking them, can the illusion of two dimensions be transcended.

Born in Payson, Utah, in 1947, Morgan belonged to a close-knit family growing up. His father, Harold, was a miner by day and a jack-of-all-trades when off the clock. “He was the kind of person that if he wanted something he would make it or build it himself,” Morgan says. “He made the most wonderful Canada goose decoys; he made fishing lures; he built boats; put cars together and made us a camper.”

Harold Morgan Sr. died when Jim was just 15 and in his absence Morgan was ushered gently into adulthood by a brother, Hal, 18 years his senior, who assumed the role of surrogate dad.

After attending Utah State University, taking art classes but preferring to explore the mountains, Morgan got a job at a piano factory owned by Wurlitzer and painted every moment he could steal away. Finally, in 1985, he made a leap of faith after several portrayals of wildlife sold. With wife Ruth’s total support, he’s never looked back. “Jim’s art is who he is,” Ruth says. “You can tell a lot about him based on his painting.”

The Morgans live in Mendon, not far from where the headwaters of the Little Bear River tumble out of the Wellsville Mountain Range, a sub spur of the Northern Rockies located between the Wasatch and High Uintas.

Morgan still hunts upland game and waterfowl — which serves as a special outing of bonding with his chocolate Labrador, Lily. But his true harvests are ideas that arrive on daily treks. When he’s in full absorption mode, Ruth says, her husband is amassing the visual architecture for dozens of new paintings. “If I felt as if I were able to translate with paint just 20 percent of the possibilities I see in my head, I’d be satisfied,” Morgan says. “But the results evade me.”

Walter Matia, Morgan’s good friend, fellow naturalist and an acclaimed sporting art sculptor also appearing in the Woolaroc show, says that “all great representational art starts with keen observation and evolves through ruthless editing.” Without the ability to identify the essence of a scene or subject, amid a flood of visual noise, coherence in trying to make a statement can get lost.

“There is too much information in the natural world to move an idea to art without possessing those skills,” Matia says. “Jim simply has the best trained eyes in the business. Through decades of studied wandering with gun, camera and binoculars, he has mastered the subtle changes in light and structure in the landscape. His canvases are beautifully balanced passages into the intimate moments of animal behavior and the habitats they live in.”

They are not animals in a painting, but animals of a painting, he notes, reluctant to describe Morgan as a stylist. “Style can be a fickle goal in an artist’s career; style without substance is the mark of a lazy mind. But the careful development and exploration of a way of expression, which leads to a recognizable style, takes the artist and the viewer along a cumulative journey of joyous discovery. A Jim Morgan painting is distinctly a Morgan.”

Consider the piece Sunning. Based on a cursory reading, it would appear to be a painting about a cottontail in winter. It is instead an engaging study of light and value that with each viewing becomes more engrossing.

“In this small town where we live, there are still a lot of barnyards. Just 50 yards west of us there were, at one time, seven barns in row. The old farmsteads have these intriguing grids of old, dilapidated outbuildings and fence-lines on their way toward receding into the ground. What they throw out are fascinating patterns of shadow.”

Sunning summons us into a maze of fractured, bending sunlight that uses the rabbit as a focal point of entrance into an elaborate warren of subtle abstraction. Morgan excels at distilling nature into smaller, intimate vignettes of seeing.

High on Morgan’s list of early influences is Danish-American Impressionist Emil Carlsen [1853–1932]. “He was in no hurry to finish a painting,” Morgan says. “What do I love about his landscapes? You can stand back and say, ‘Oh my God, it’s wonderful’ and it is. But for me, the proof of a piece being designed to perfection is walking up so close that your nose rubs against it and you get lost in the paint.”

As with George Carlson and Emil Carlsen, Morgan isn’t in a rush. He savors working over his surfaces to achieve a gritty texture. At any one time, Morgan has seven or eight paintings going.

Because of their sublime originality, Morgan seems to paint the unbelievable. The day after he described the inspiration for an owl painting in the wings of development — of a bird camouflaged in a cliff face near his home — he said that wasn’t half of it. Wedged into the sheer face of a mountain were also aeries holding a golden eagle, peregrine falcon and red-tailed hawk.

It sounded outlandish. And then he emailed me a photo confirming not only the dramatic setting for his owls in oil, but visual documentation of the larger panorama holding the avian panoply. In Morgan’s company, as in his corpus of works going back four decades, there are wonders to behold, each confirming his uncommon percipience.

“Jim’s paintings of wildlife evoke a flash of recognition. They connect with what we sense instinctively rather than a focus on illustrating minute details,” says landscape painter Len Chmiel. “His ability to place his critters in a precisely correct environment supported by his impeccable draftsmanship and compositions are the result of a lifetime of dedication to his art.”

Susan Simpson Gallagher, a longtime gallery representative of Morgan’s work, asserts that the supreme hallmark of his approach is sensitivity. “That is the word I think of when viewing his paintings.

It is also the word that describes the artist. There’s a quietness he conveys that moves me. He is amazingly observant, contagiously enthusiastic and insatiably curious,” she says.

Morgan holds wildness at a distance out of respect, demanding that we ponder it reverently, says Gallagher. “In one of Jim’s paintings in the gallery, a coyote returns my gaze and is not threatened — neither am I. Still, I don’t sense that I am invited into the animal’s world. I am privileged to be ‘only’ a voyeur.”

Morgan is intrigued by the archetypal connections humans have with different species, originating in our common aboriginal pasts, regardless of continent. It’s why he has quietly and in his own blissful seclusion attracted an international following.

“Jim’s always coming up with interesting ideas, which is extremely difficult,” Carlson says. “As an artist, I appreciate his ability to say something exceptional with landscape and wildlife in it, but without tritely stating the obvious.”

Not long ago, Simpson Gallagher says someone called her looking to purchase a Morgan painting. “When I asked if she had a specific subject in mind, she said with a sigh, “Swans, of course. Nobody handles swans like Jim Morgan. He captures their elegance, their strength and grace so beautifully.’ What she said is true, but I feel that way about most everything Jim Morgan paints.” 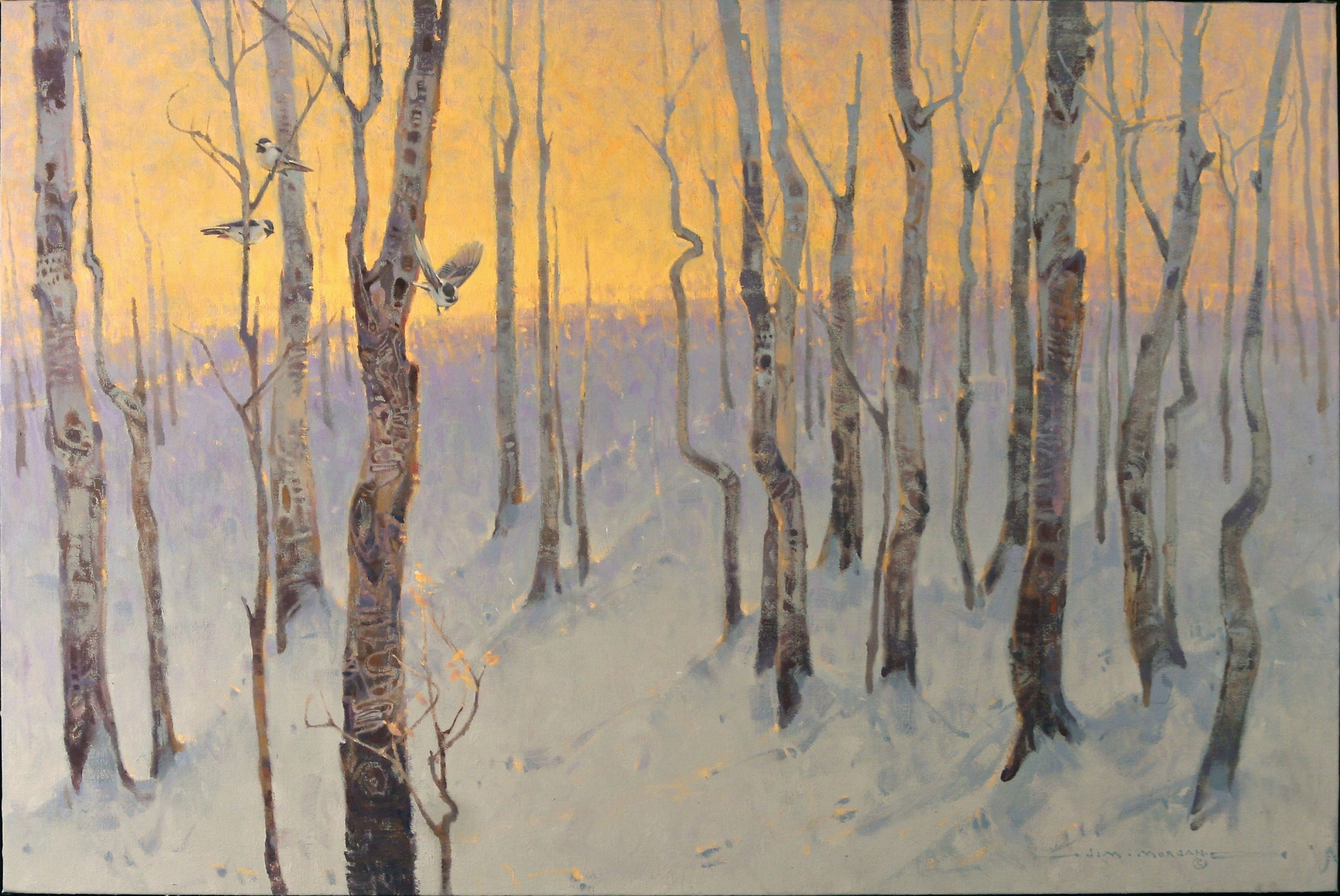 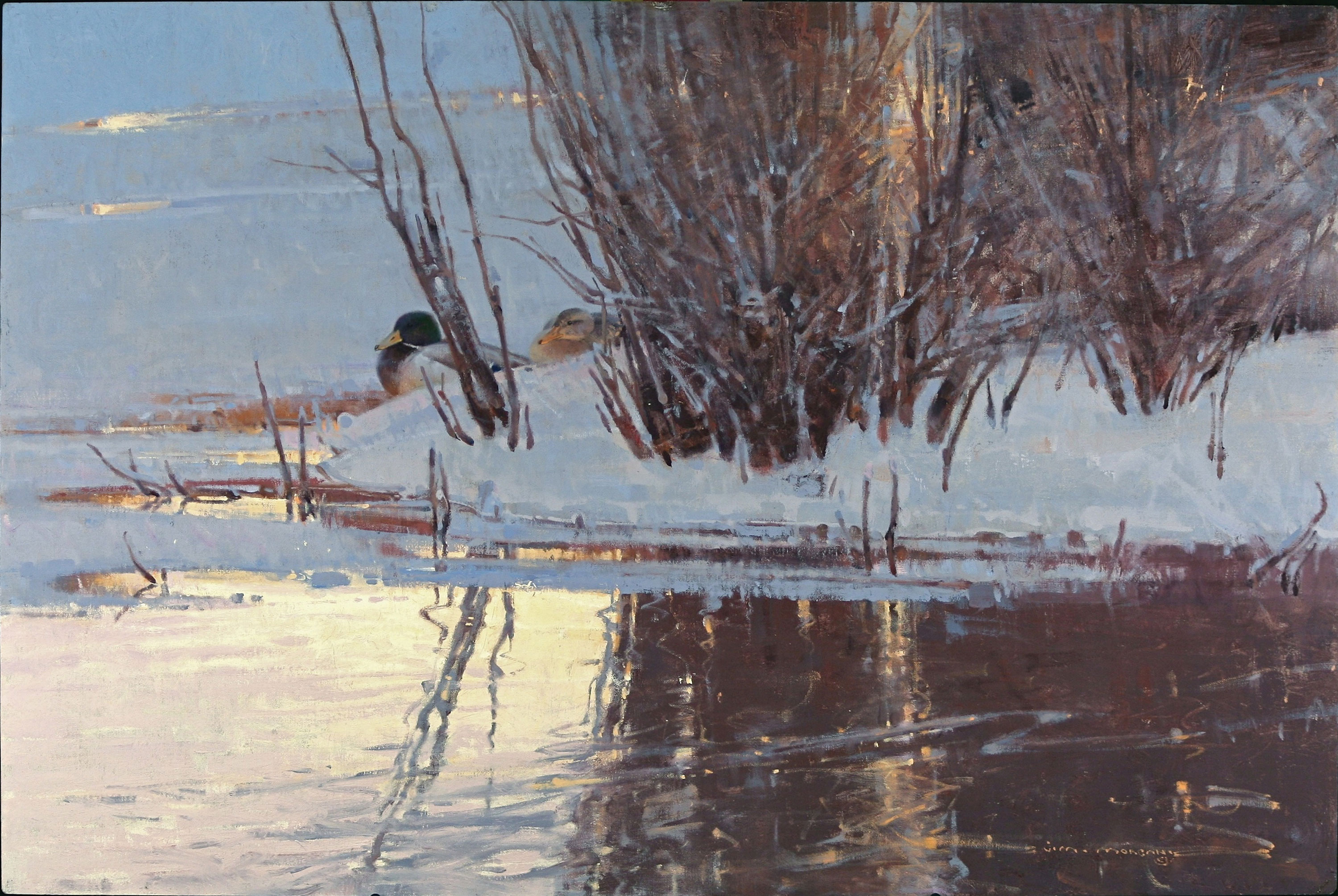 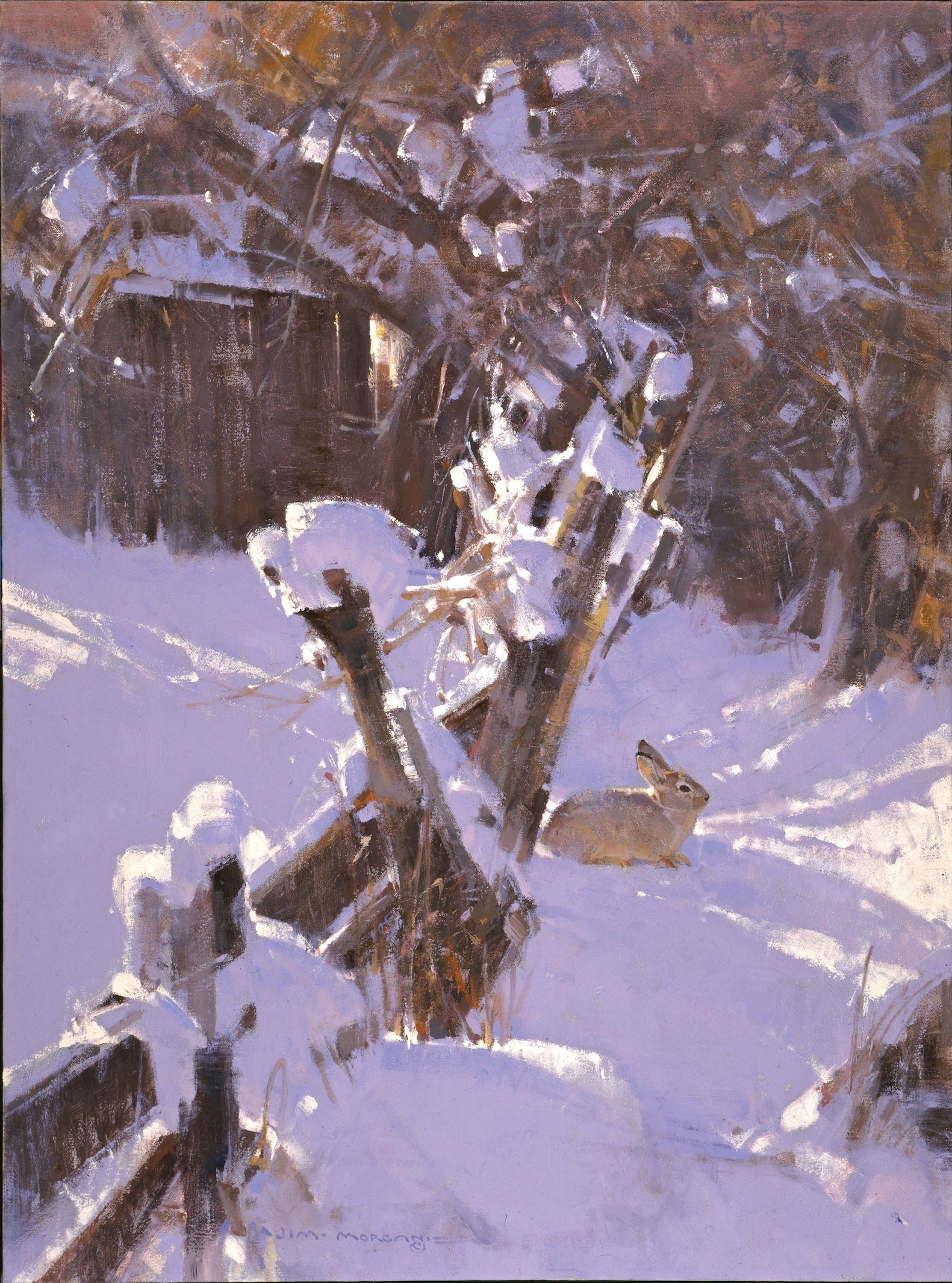 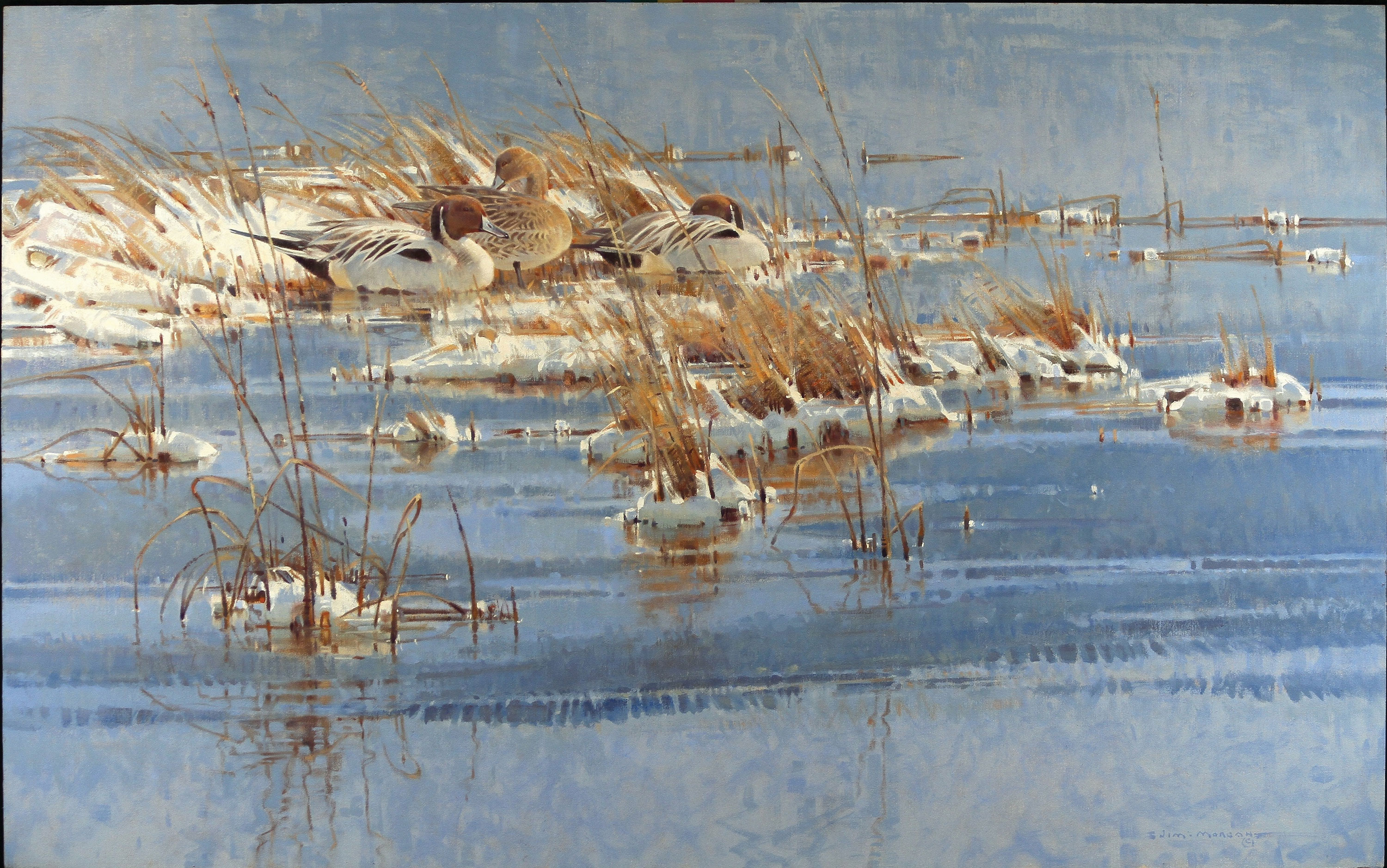