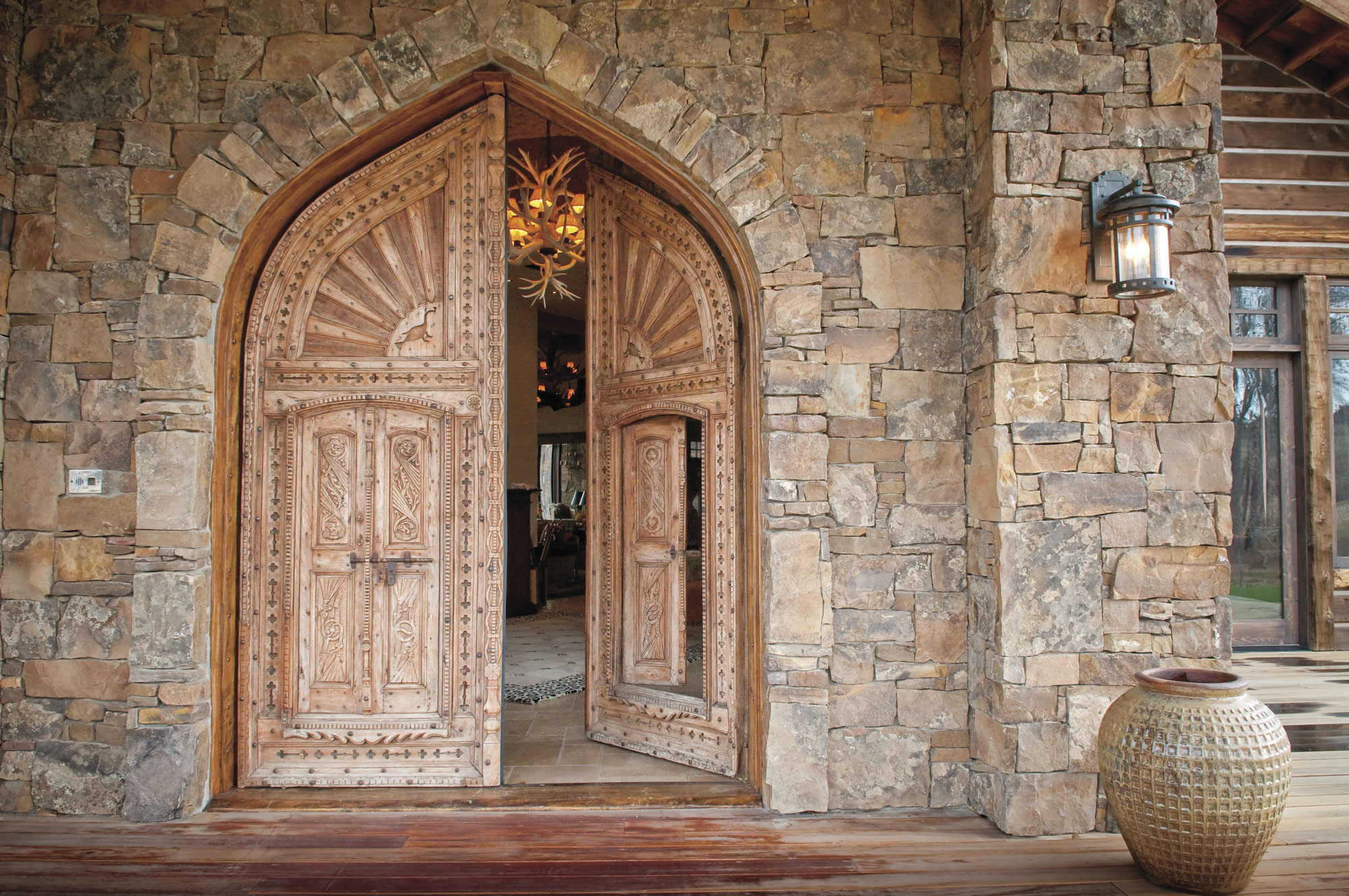 The front door was imported from India.

29 Dec Where the Wild Things Are

IN MONTANA THE ARCHITECTURAL LANGUAGE OF THE WEST IS THE HOMESTEAD. It’s tempting to recreate the nostalgia and romance of the cabin. Descriptives such as rustic, rugged and natural come to mind and sometimes overpower the sensibility of modern living.

Many an architect has imitated the area’s humble history; many a landowner has initiated a new home on the range that was crafted to look old. There’s beauty in that, certainly; but architect Frank Cikan adds his own touch to the traditional approach to living in Montana. He begins by looking at the land, the same way the practical homesteader may have done a century ago, evaluating light and site, water, wind and views. Yet, there’s also an intangible element to it. For Cikan, good design begins with mystery.

That approach appealed to Sherwin Scott’s spirit of adventure. An avid sportsman, member of the International Safari Club and lifelong adventurer, he came to the state to fish and hunt. Intrigued by the remoteness of the Ruby River Valley, he found a ranch with acreage along the banks of that river and fell in love with its subtle beauty. He wanted something unusual for his retreat in Montana.

The two collaborated on every detail of the home with great input from Sondra Van Wyck, Scott’s partner. Scott shared his love for wild things — places, beasts, people. Cikan listened, and created an elegantly eclectic lodge with a style template all its own.

“This house is specific to the owner and reflects his personality,” says Cikan. “Sherwin is all about discovery and challenge and so is the house; like Sherwin, you never get to know it completely.”

The Ruby Valley is a place of quiet beauty. Swaths of hayfield buffer the Tobacco Root Mountains, the Ruby Mountains and the Madison Range in the distance. Remote and solitary, its landscape is a caress of changing light across blonde-grassed hills and the secretive bend of a shallow river. Architecturally that presented a challenge to Cikan. An ostentatious house would be out of place, cautioned his client. So the home is not visible from the road, but rather nestled into the line of cottonwoods along the river.

There isn’t an extravagant gate or chaparral marking the entrance to Scott’s ranch. Instead, an innocuous dirt road wends its way through a field, flat and gentle, ambling like the river through a stand of trees. It’s a fairly long drive, an approach that Cikan choreographed to cultivate a sense of discovery along the way, only allowing people to view the house after they’ve experienced the landscape.

There are classic Western elements in Cikan’s design. The stone and timber and logs are all here, but the application is a unique combination that allows a nod to rustic vernacular without trying to replicate it. Inspired by the region’s ranching history, Cikan kept the exterior design subdued, offering divergent rooflines to give the effect of one structure that was added onto over the years. From a distance, classic gables cap an overhanging porch; cupolas top a long structure that resembles a barn; flagstone paths lead to stone steps. A closer look, however, reveals the nuance of something more exotic than a simple ranch house.

Sondra’s exquisite taste and sensitivity for the interior design, coupled with extraordinary knack for finding items from their travels, created interiors with specific themes. She made the house come alive and have a distinct character, complimenting and enhancing the architect’s vision.

The front door says it all. Arching 12 feet over the threshold, the hand-carved mahogany was imported from India. Sherwin and Sondra stumbled upon it in their travels. Seasoned art collectors, they visualized sculptures, paintings, artful mounts and architectural elements that would later inspire the intricate design of their Montana home. They began to accumulate other doors — all ornately carved, some 9 feet tall, others diminutive, some with transoms, each a work of art on its own. Ultimately, Scott jokes, the house was built around the doors.

Stepping through that front door into the domed entryway has a transportive effect — a whimsy akin to Alice through the looking glass or the wardrobe to Narnia. The first impression of the home is one of intrigue.

“There’s a sense of movement in the design created by that curvilinear hall in the entry,” explains Cikan. “It tells you there is something unique behind the doors.”

From the entry, the house divides into two paths: one to a wide hall that doubles as a gallery and leads to the bedrooms; the second to the main living area and kitchen. Cikan points out that the design engages visitors, asking them to acknowledge the space by making a choice to go one way or the other.

Lightly colored travertine steps move down to the living room, which unfolds with a view of the Ruby River through a massive window. The landscape just outside fills the interior space. The natural arc of cottonwoods frames the sweet twist of the river and the changing light of day.

“The first time I walked this property and saw that view, I knew this was where the house would be,” says Scott.

When he hired Cikan, Scott brought him to the site along the river. They spent time together here, watching the arc of daylight, imagining the way a home might sit on the land. Appropriately, the meander of the river became the inspiration for the design concept.

In the same way the river undulates along the land, so does the house, with multi-level rooms and the easy way one space flows into another. There is an interconnected feeling within the 10,000-square-foot house, cultivated by an aesthetic transparency in that an arch between the living room and kitchen opens up the spaces and then moves to an enclosed sunroom. The dining room steps up from the kitchen and living room, all public spaces that balance the privacy on the opposite end of the home. Nearly every room has access to the outdoors and celebrates the connection to the land.

Drawing on his European roots, Czech-born Cikan focused on creating comfortable living areas within a grand-scale home. He cites Old World lodges and castles that juxtapose intimacy with opulence by layering natural building materials, personal artifacts and a function to each room. This is the key to Cikan’s unique approach to design: The intangible element of his upbringing in Europe combined with education and architectural practice in Montana emerges as a nuance that is both contemporary and ageless.

“What I can say about working with Frank is that it was a complete collaboration,” proclaims Scott. “Taking every opportunity to make cohesive decisions to make the house flow better, it evolved … it was never complete until we declared it so.”

Over the prominent stone fireplace in the living room a wildlife painting by Brent Todd encompasses the mystique of the Rocky Mountains. Works by Martin Grelle, furniture maker Andy Sanchez and many more punctuate the owners’ passion for art. In the dining room a Black Forest chandelier marries the tradition of sportsmen, past and present, seamlessly into the decor. Scott and Sondra’s personal connection to art is apparent in every corner of the house. The work that Scott relates to most is a painting by Stephen Lyman depicting a campfire in a remote mountain setting.

“If there is one piece of art in this house that is reflective of my life, it’s this painting,” Scott offers. “My best memories have been around the serenity of the fire in some remote wilderness.”

Following that sentiment has led Sherwin around the globe in pursuit of adventure. From the Caucasus Mountains of Azerbaijan to the Central African Republic to Mexico’s Tiburon Island, South Africa, Switzerland, Africa and Alberta, Canada, he has hunted some of the world’s largest game and rarest animals. Respectfully, he has had the rewards of successful hunts mounted and displayed in a tremendous diorama. With murals painted by Chicago artist C. Paul Barker, remarkable mounts from Michael Boyce of Animal Artistry and Montana taxidermist John Lewton, Scott created a wildlife diorama of near-museum quality. One of the goals was to put each species within its own environment rather than jumbled together unnaturally.

From an architectural standpoint, Cikan designed a room with the volume of space that might traditionally be found in a classic barn. The result is a room with a 30-foot ceiling that is 50 feet long and 40 feet wide. A classic saloon-style bar flanks the astoundingly vast wildlife exhibit. Scott distinctly refers to the space as a game room, intent on honoring the animals, immortalizing them rather than the hunter.

As with each area of the house, the game room is comfortable despite its size. Maintaining the sense of mystery in the design, by allowing each room to exist independently, by not revealing each space immediately, keeps viewers wondering what’s around the bend, so to speak. Accommodating the eclecticism of Sherwin and Sondra through art and personalized interior-design style brought the home beyond the simple definition of a ranch house. 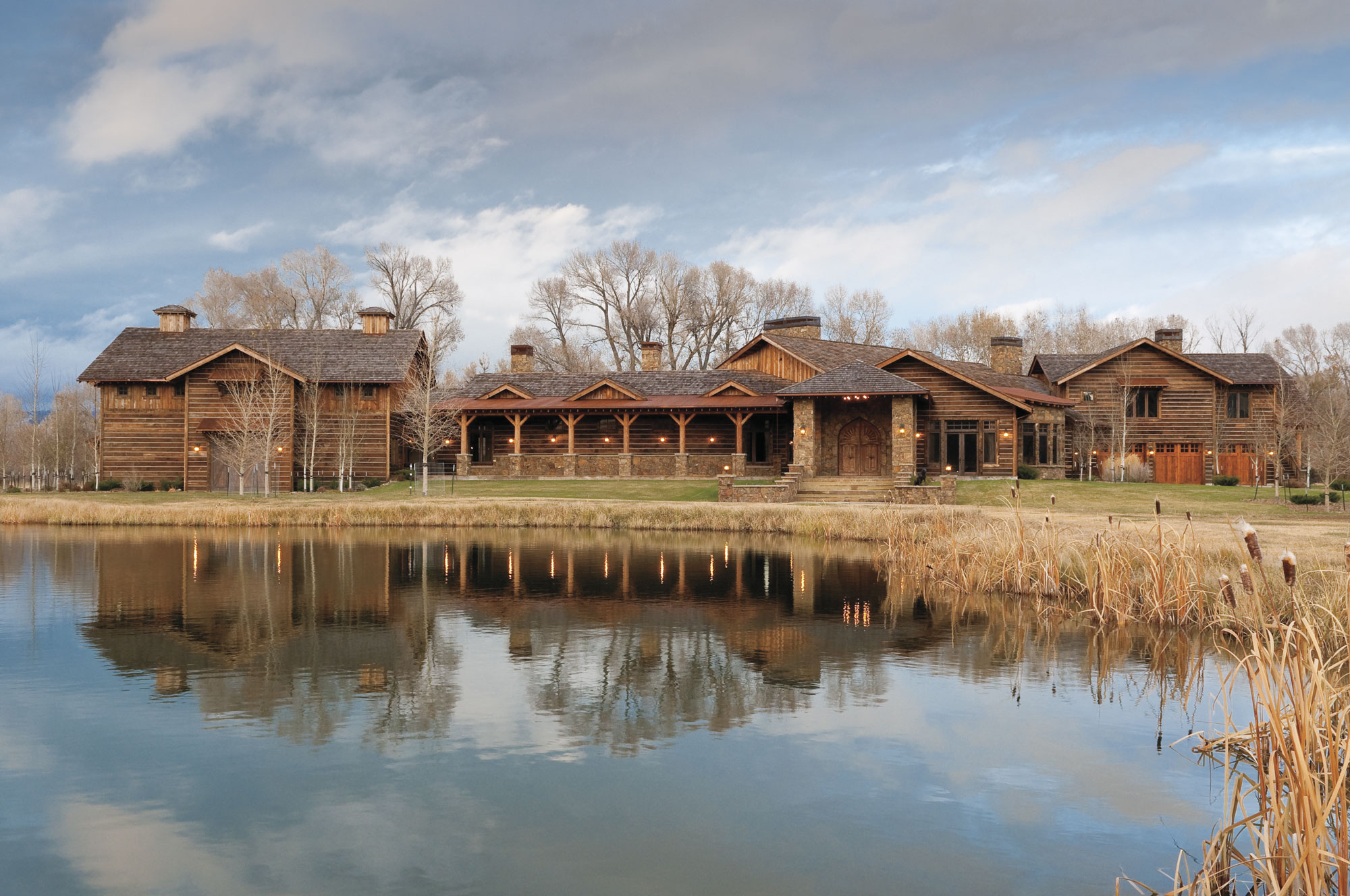 A design inspired by the landscape created a unique Western home. 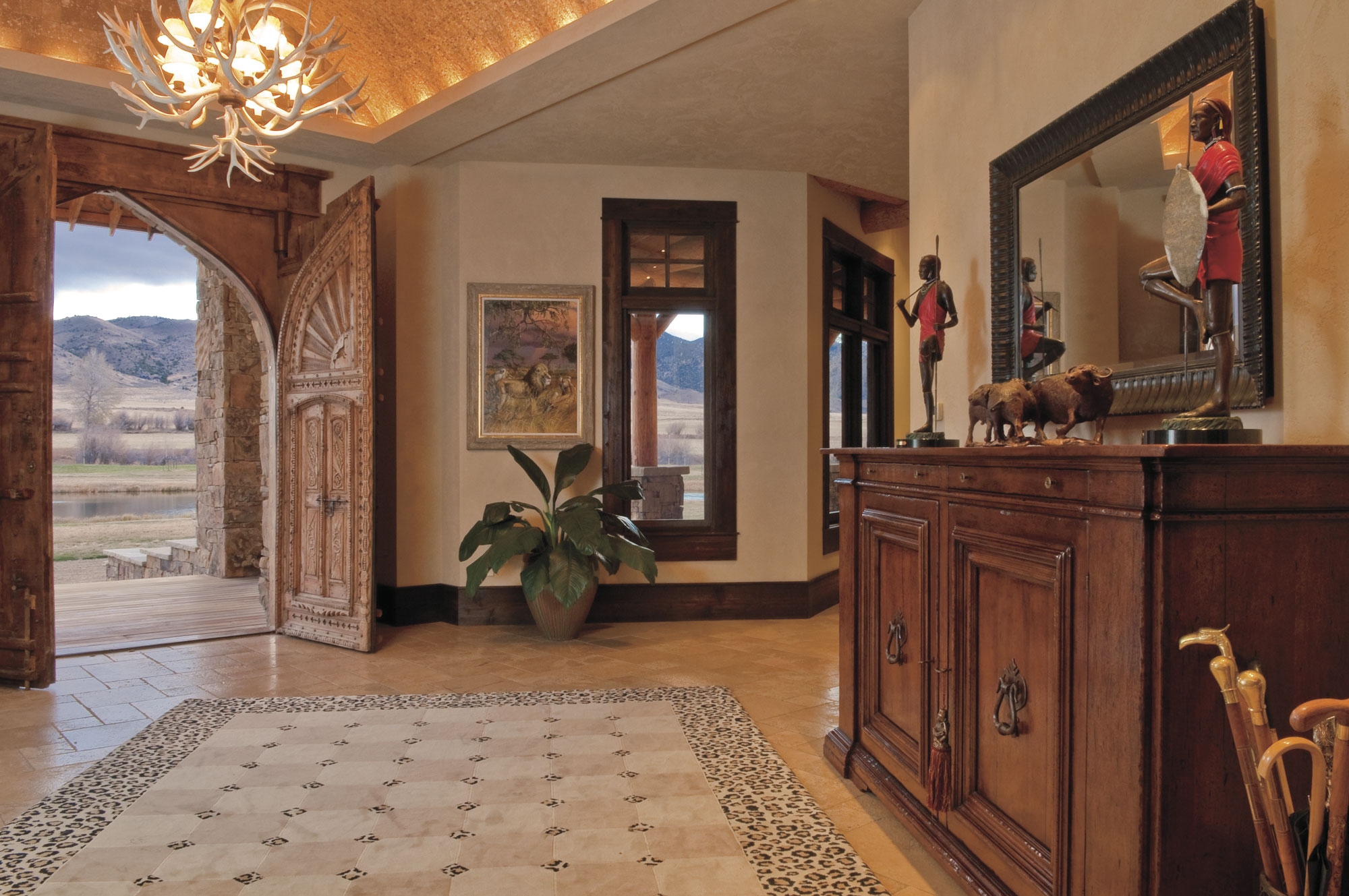 Through the front entry twin Massai warrior sculptures stand sentinel over visitors. A bleached elkhorn chandelier overhead is illuminated by the golden uplighting of a tile-ceilinged atrium. Wildlife oils from Lindsay Scott and a Cape buffalo wood carving from an African artist flank the entryway and allude to an impressive love for art. 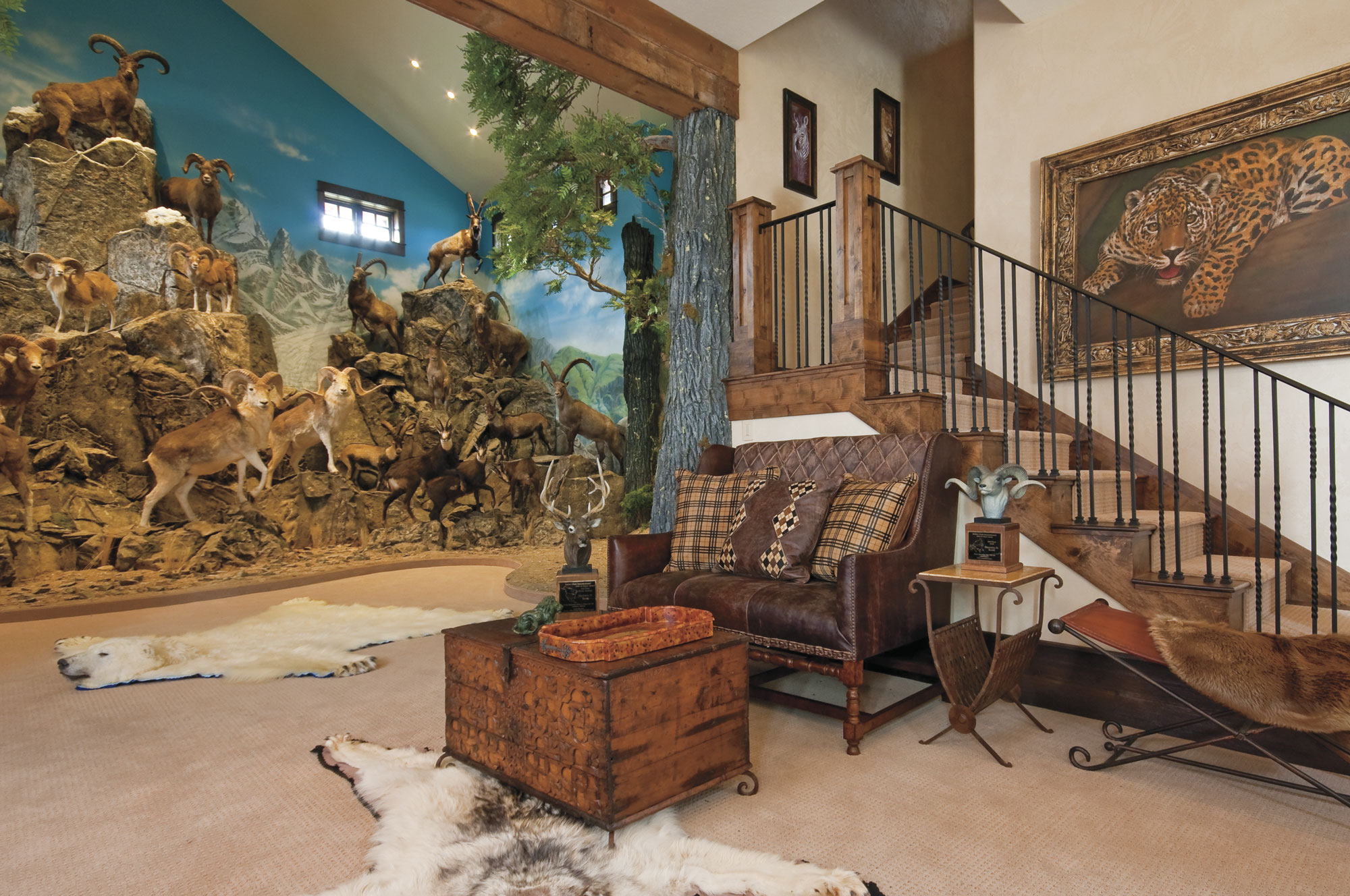 For the game room the owner commissioned Chicago artist C. Paul Barker to paint a mural for the backdrop of a diorama which displays an impressively diverse collection of wildlife mounts from successful hunts around the globe. 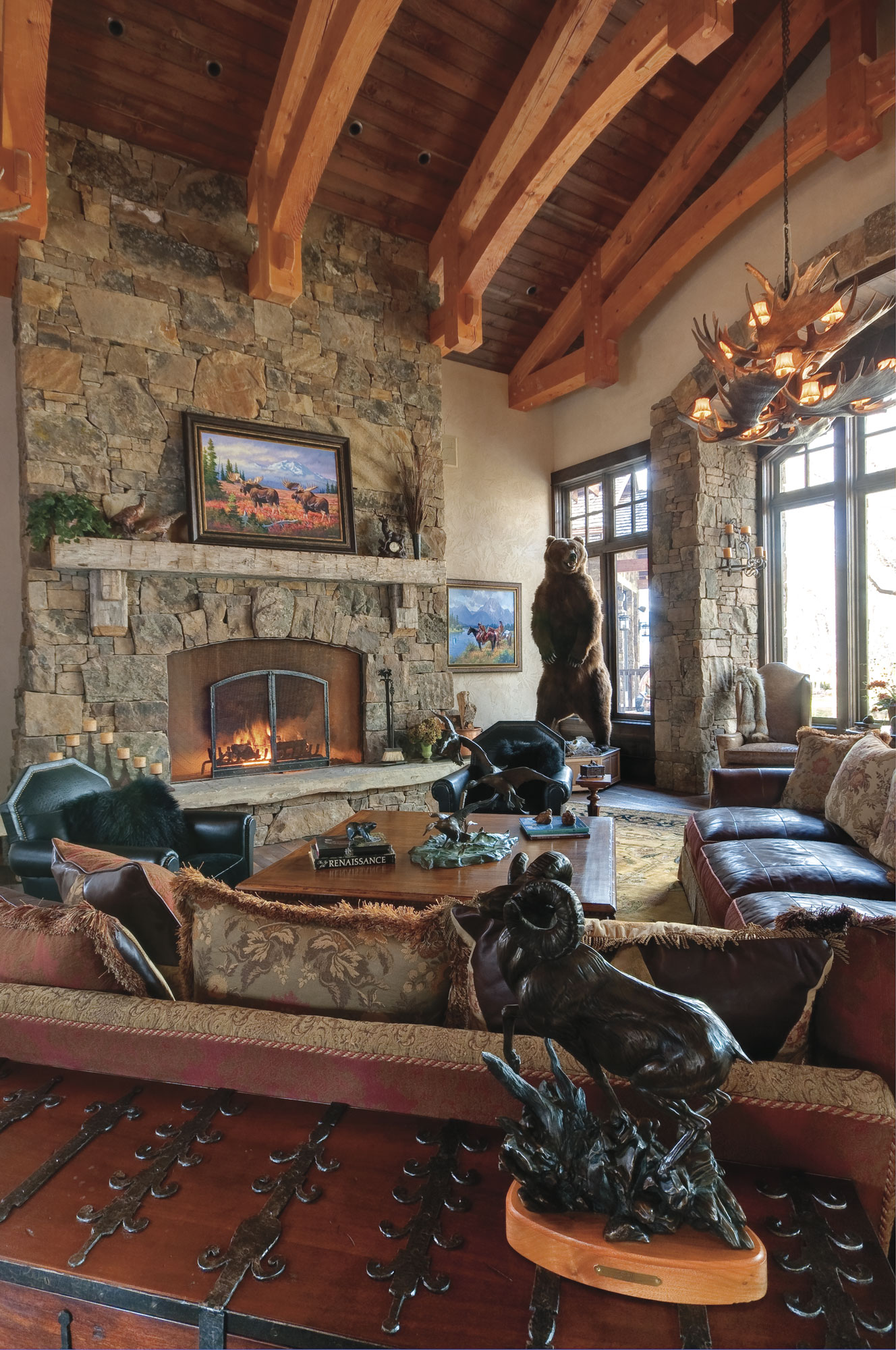 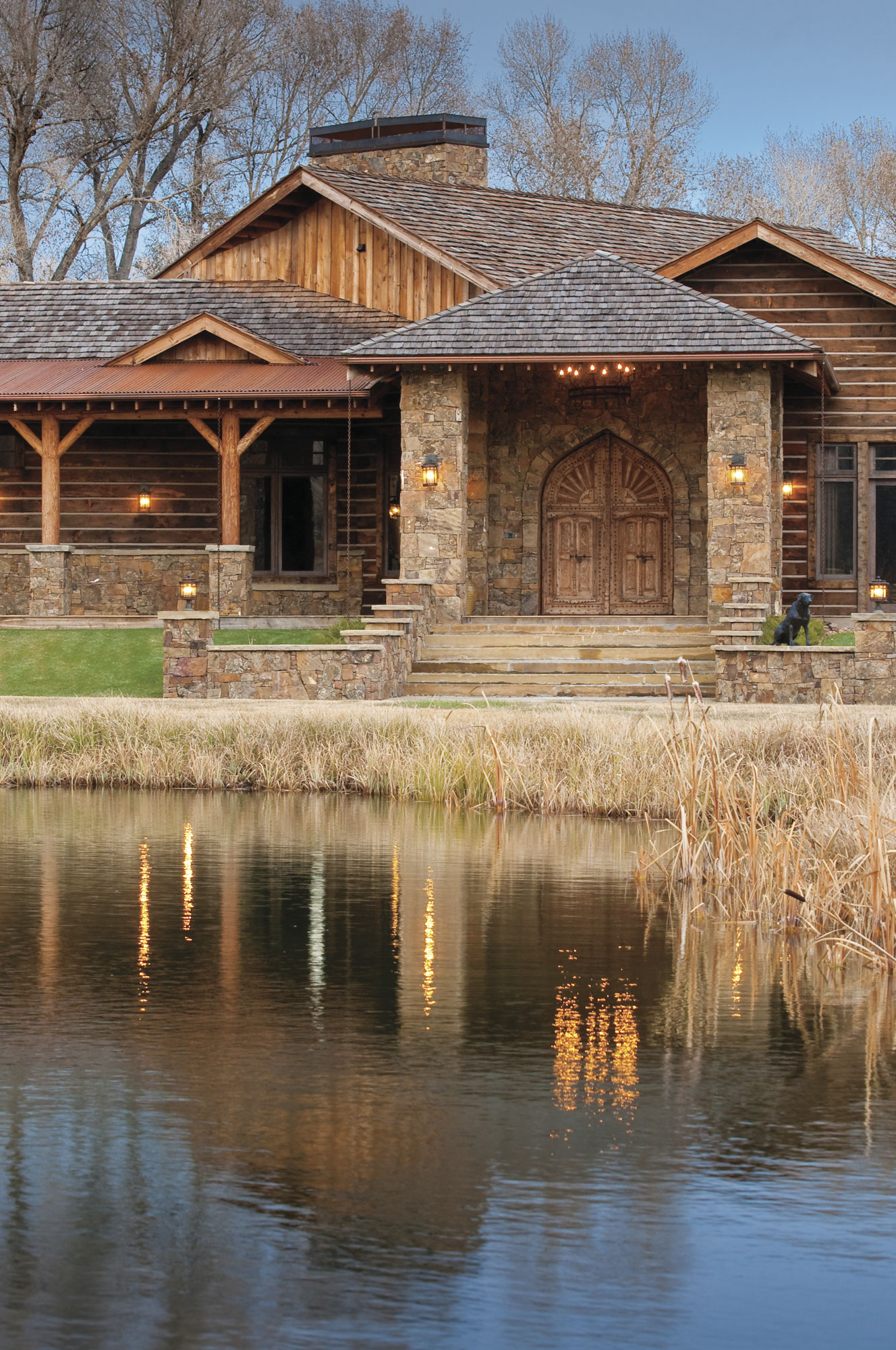 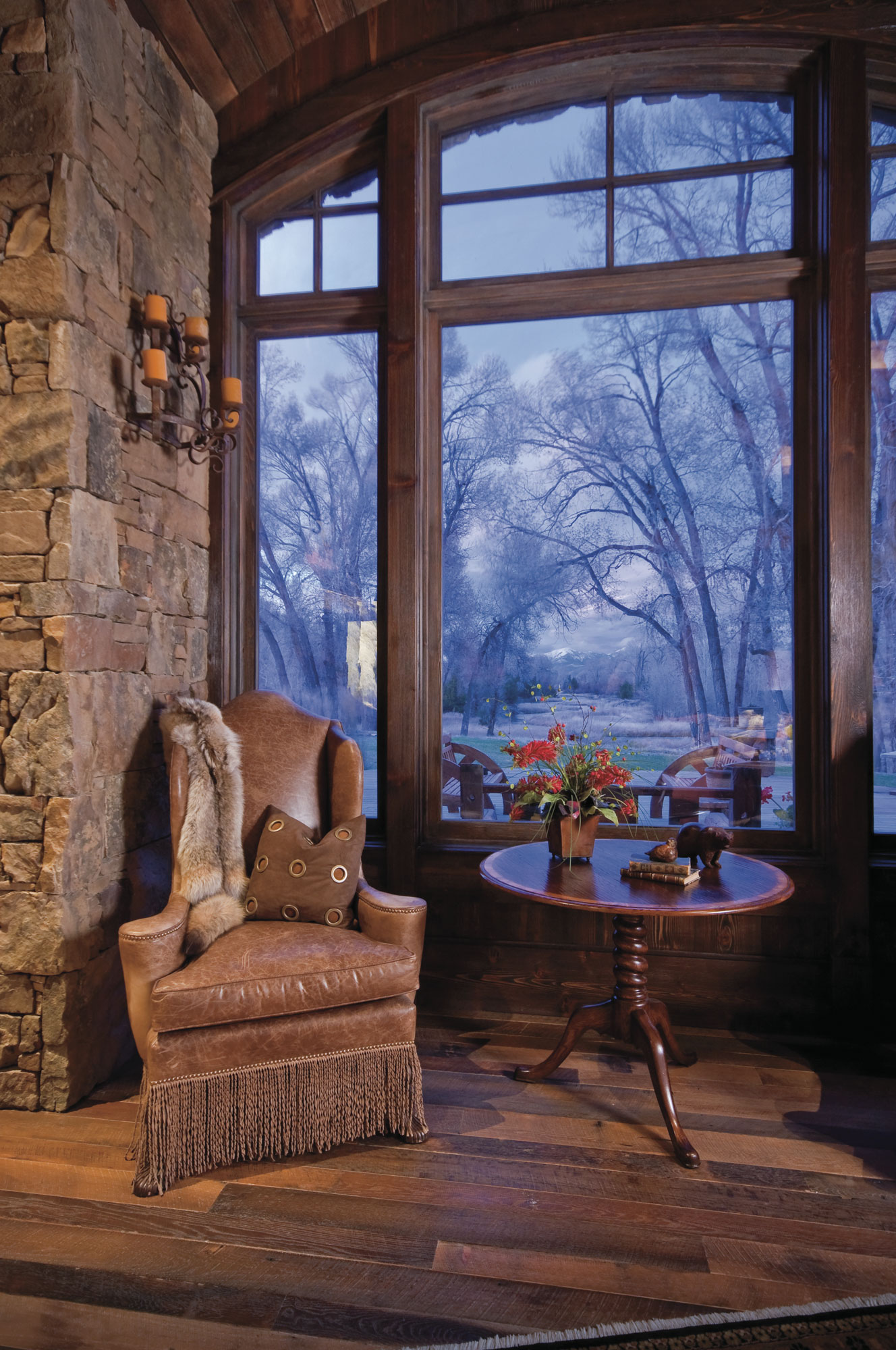 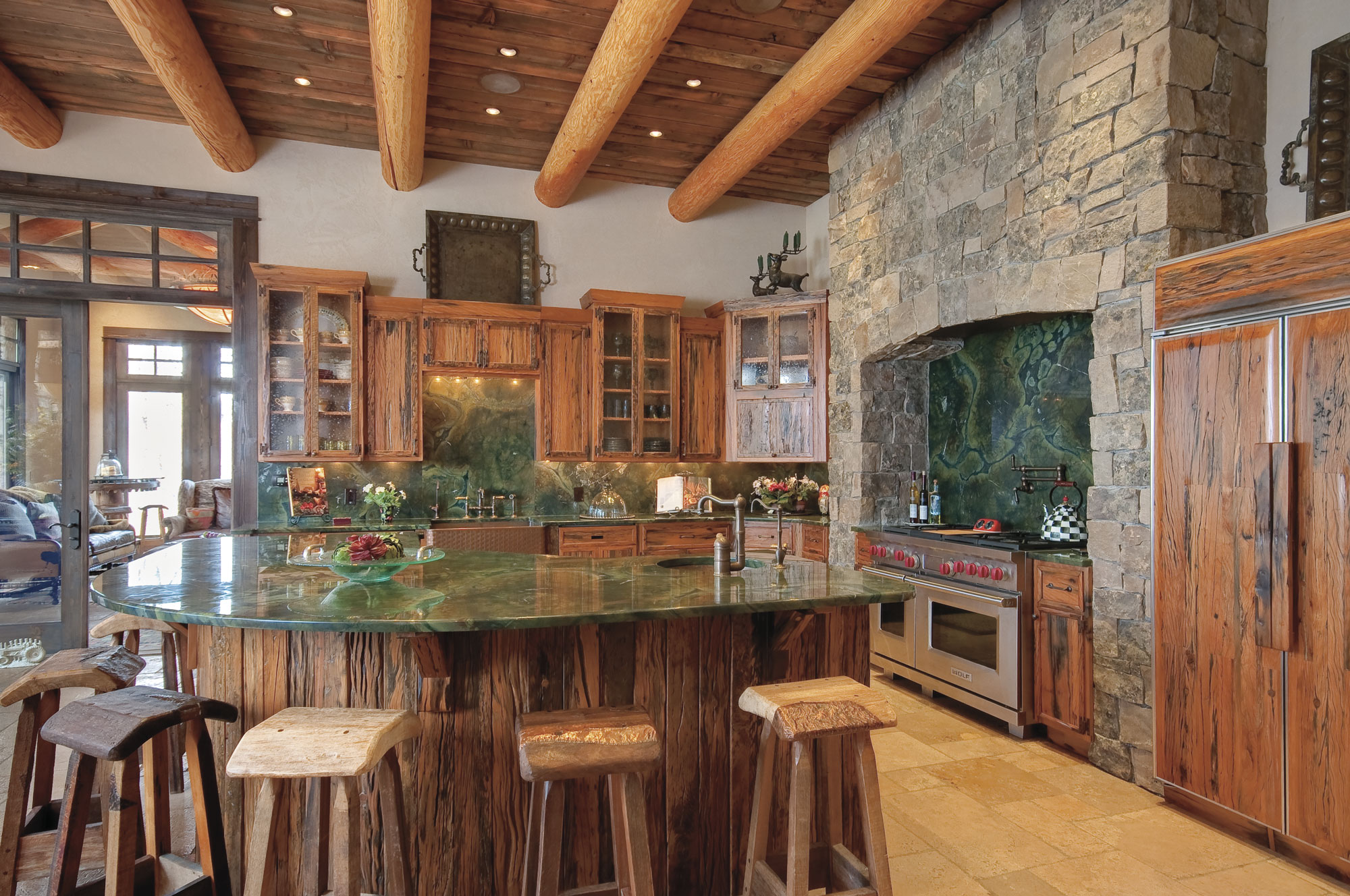 Custom cabinetry in the kitchen is made of imported South African wood and South American granite on the countertops. 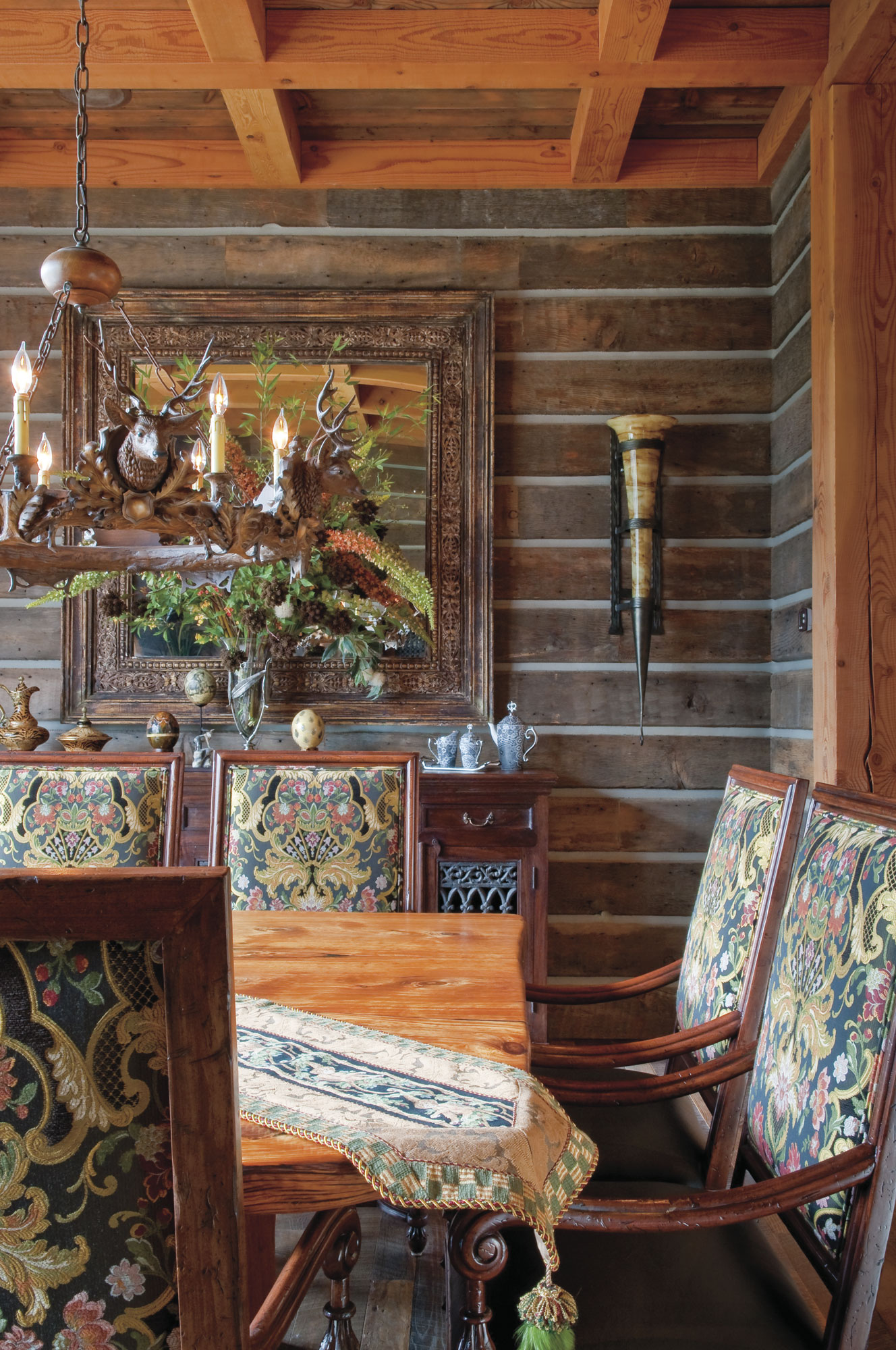