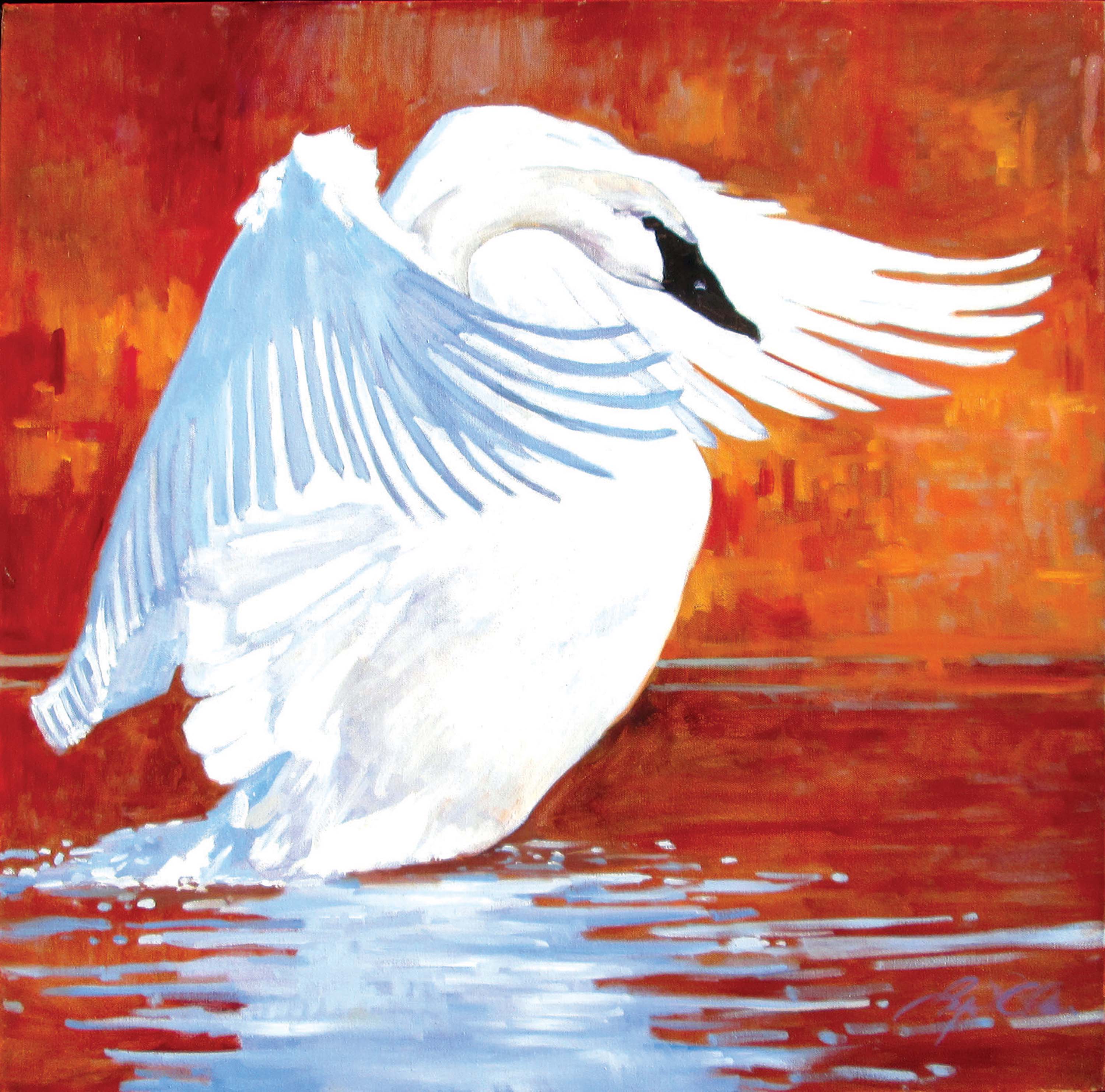 IN A GENRE OF ART ONCE DOMINATED BY MEN, an extraordinary group of women are driving fresh, expressionistic styles painted from the heart and untethered by traditionalism. Some might call what is happening in the West a movement in wildlife art. At the very least it reflects a western migration of talented female artists. Brave enough to uproot from far-away homes and willing to take both personal and stylistic risks, these women of contemporary wildlife art are willing to sacrifice everything to immerse themselves in their art and the wilderness that inspires it.

By living and working in places defined by open space and wildness, these artists find inspiration by spending more time in the field with their subjects to better understand, and ultimately communicate, their experience of wildlife and nature through their chosen mediums. Whether laid down on canvas, paper or wood using any combination of watercolors, acrylics, oils, charcoal or pencil, the boldness of the styles they are establishing is definitely making waves in the world of wildlife art. The mediums are as diverse as the subjects and composition, with some artists experimenting with several mediums, moving freely from one to another, in order to follow their hearts and intuition to better capture their vision of what it is to be wild.

“It’s like freestyle dancing — when the music changes, you change the dance,” says Mary Roberson, one of the pioneers of contemporary wildlife art.

Based near Ketchum, Idaho, Roberson began painting when she was a small child, but her journey into contemporary wildlife art began in the early 1990s. “I got strange looks from traditional artists when I started showing — it wasn’t readily accepted.” Calling her work “contemporary naturalism,” Roberson says you have to look beyond the surface of the painting to fully understand her intent.

For the more established brand of illustrative realism used to depict wildlife in more traditional paintings, Roberson’s work is a marked departure from the status quo. “There’s nothing artistic about copying nature,” Roberson argues. She believes that one reason women are appearing at the forefront of this movement in contemporary wildlife art is because woman are bigger risk takers. “Women have nothing to lose because they aren’t looked at as seriously as wildlife artists.”

Another established contemporary wildlife painter, Lyn St. Clair, agrees. Contemporary art is about taking risks,” she explains. “I’m not afraid to take risks with my work. When I follow my heart, it works.” St. Clair adds that she thrives on change and migrated west to the Greater Yellowstone region in 2002 to be closer to the animals and wild places that inspire her. Her first wildlife-inspired works in the ’80s were done with pen and ink in a traditional style before she evolved to the more contemporary expressionistic style that inspires her today.

Although St. Clair was already an established artist with a substantial collector base, she continued developing her new style. “The point is to do something better and more interesting — I like work that scares me. The people that excel are always pushing, and that includes artists.” St. Clair’s contemporary work has garnered international attention and has won dozens of awards, including three years as Best in Show for the Ward Museum Show in Ocean City, Maryland, and an Award of Excellence at the NatureWorks Show in Tulsa. She has also been accepted into several prestigious juried shows both nationally and internationally, such as the Wild in de Natuur in the Netherlands, the Bennington Center for the Arts’ Art of the Animal Kingdom, the Tucson Museum of Art’s Women Artists and the West, and the Leigh Yawkey Woodson Art Museum’s Birds in Art.

Kathryn Turner, an award-winning painter and owner of Trio Fine Art Gallery in Jackson Hole, agrees that women are risk takers. “I don’t feel I have anything to lose. We’re just out here whacking away — it’s the status quo versus evolution,” she says. Turner’s work blurs the line between traditional and contemporary by honoring her subject’s form and movement while playing with the background to make space more ambiguous. Turner grew up in Jackson Hole and is keenly aware of the source of her inspiration. “I am influenced by the West’s big skies, long horizons and wildlife.” When she moved to the city for school, Turner experienced a “palpable loss” that brought her back to Jackson Hole as soon as she graduated. For Turner, “wildlife by nature is engaging, no matter what style, there’s a bigger reaction to work with animals in it.” Turner believes that through art, people can develop a greater passion for wildlife and nature. “In some ways we are representing the wildlife when they can’t represent themselves,” she explains.

Rip Caswell, founder of the Pearl Art Auction and owner of Caswell Gallery observes that women are making an impact in art sales and are definitely at the forefront of contemporary Western art. “About 80 percent of the art in my gallery right now is work by female artists, from landscapes to wildlife,” Caswell observes. “It makes sense that women would lead the trend out of the traditional realism that has dominated

Western wildlife art for so long.” Another Jackson Hole-based painter who made the decision to pull up stakes and relocate for her art is Amy Poor. Though she grew up in eastern Oregon, Poor made the decision to move to Jackson to be closer to the community’s vibrant art scene and the wildlife that drives her work. Her current use of oils to create a nontraditional style is influenced by her years as a dedicated watercolor artist.

“Amy Poor’s paintings instill feelings of spontaneity and warmth. Poor’s transparent layers act as tiny windows allowing the audience to see her progress from start to finish. She plays and experiments with nonlocal color, all the while staying true anatomically to her subject matter, which distinctively and aesthetically sets her apart from other artists,” says Dave Navratil, business manager at Mountain Trails Gallery in Jackson Hole. Poor’s work has garnered national attention and found strong support with traditional wildlife art collectors around the country.

As she began her artistic career in the ’90s, Poor noticed a resistance to her unorthodox style, but more recently has been invited to prestigious shows that are leaning toward the more contemporary, including the San Dimas Festival of Arts and the Mountain Oyster Club’s annual art show. Referring to her colleagues, Poor reflects, “These women are trying to establish completely unique styles and take it to another place.”

Artist Carrie Wild is proving that point as well with her bright, bold colors, broad brush strokes and conformationally true wildlife that is resonating with collectors nationwide. Like Turner and Poor, Wild sees her work as a way to create awareness — even passion — for wildlife among her viewers and collectors. Her contemporary style helps Wild reach a new audience, including urban collectors that might have less of an organic connection with the animals in her works.

When Wild arrived in Jackson Hole four years ago to study and photograph wildlife as a foundation for her work, she found immediate success as a professional artist. “People from all walks of life are connecting with my art, bringing an understanding of wildlife difficult for most people to discover in their day-to-day lives.” Wild earned immediate gallery representation and is now represented by Mountain Trails Gallery in Jackson Hole and Caswell Gallery in Troutdale, Oregon. She was also the featured artist for the National Museum of Wildlife Art’s most recent Carl Rungius Society holiday party. “I met Carrie during her first summer in Jackson Hole and immediately recognized her talent. Carrie has proven to be both artistically and professionally successful in a short period of time,” says Caswell, who has represented hundreds of artists over the last 20 years.

“I focus on the presence of my subjects as I observed them in nature and then surround them with color that complements the experience,” says Wild. One of her current works, Last Light, is a great example of Wild’s use of rich color and texture on canvas with mixed media to create a unique way to communicate her subjects. Emboldened by the recent popularity of contemporary wildlife art and driven by a desire to create powerful design, Wild has been challenging herself to experiment with mixing a variety of mediums, including gold leaf and hand-fired resins, to achieve her vision. 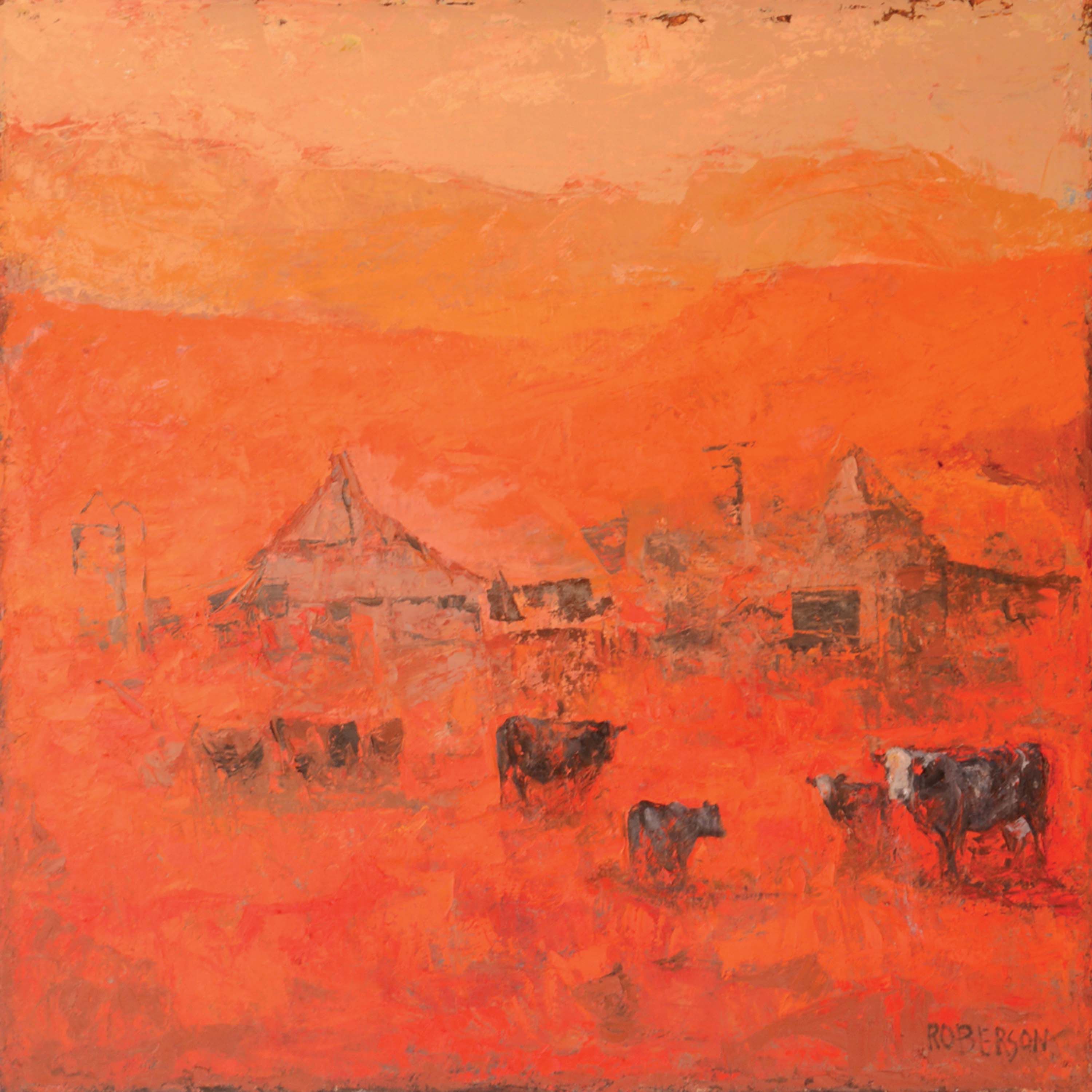 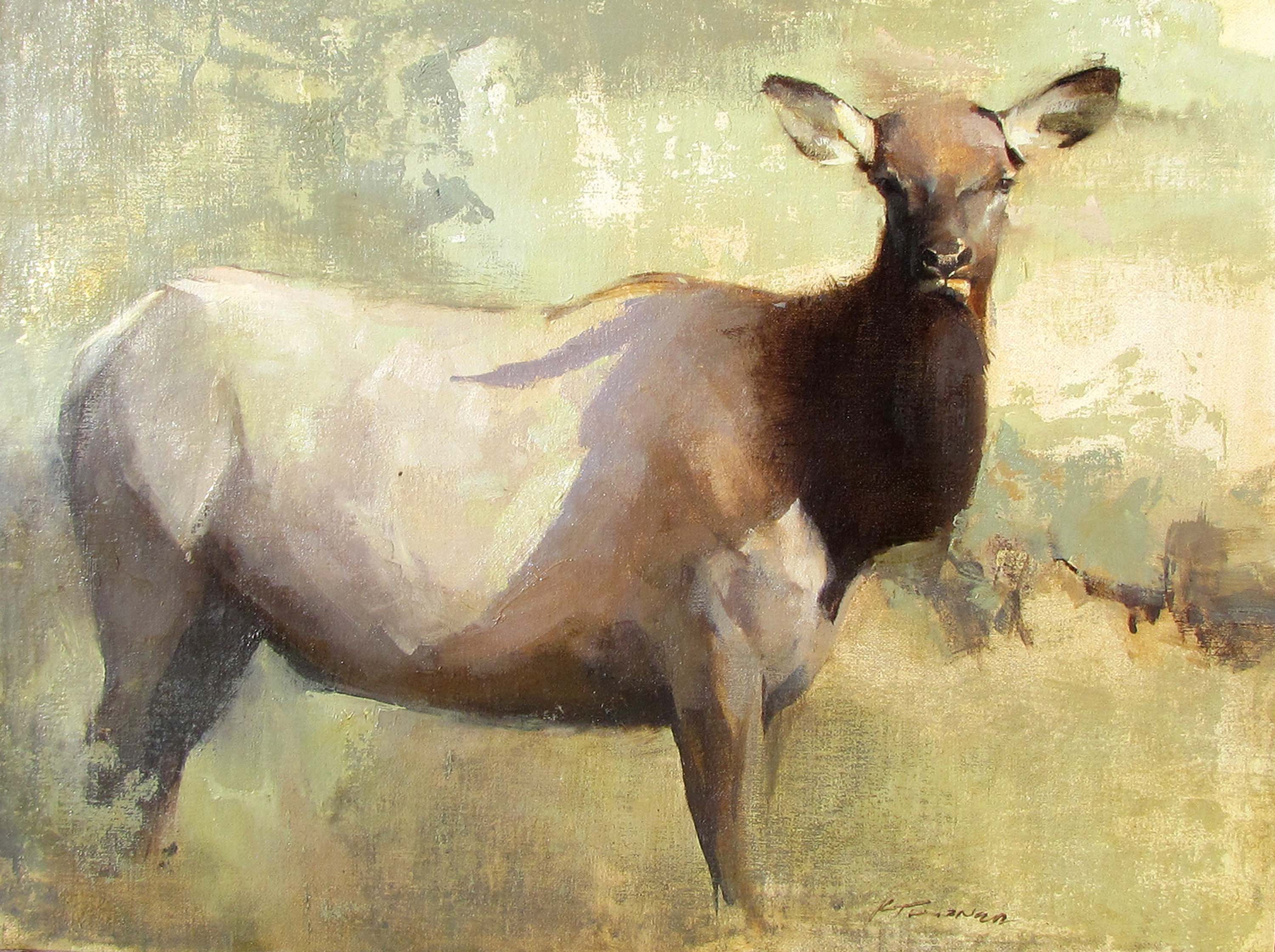 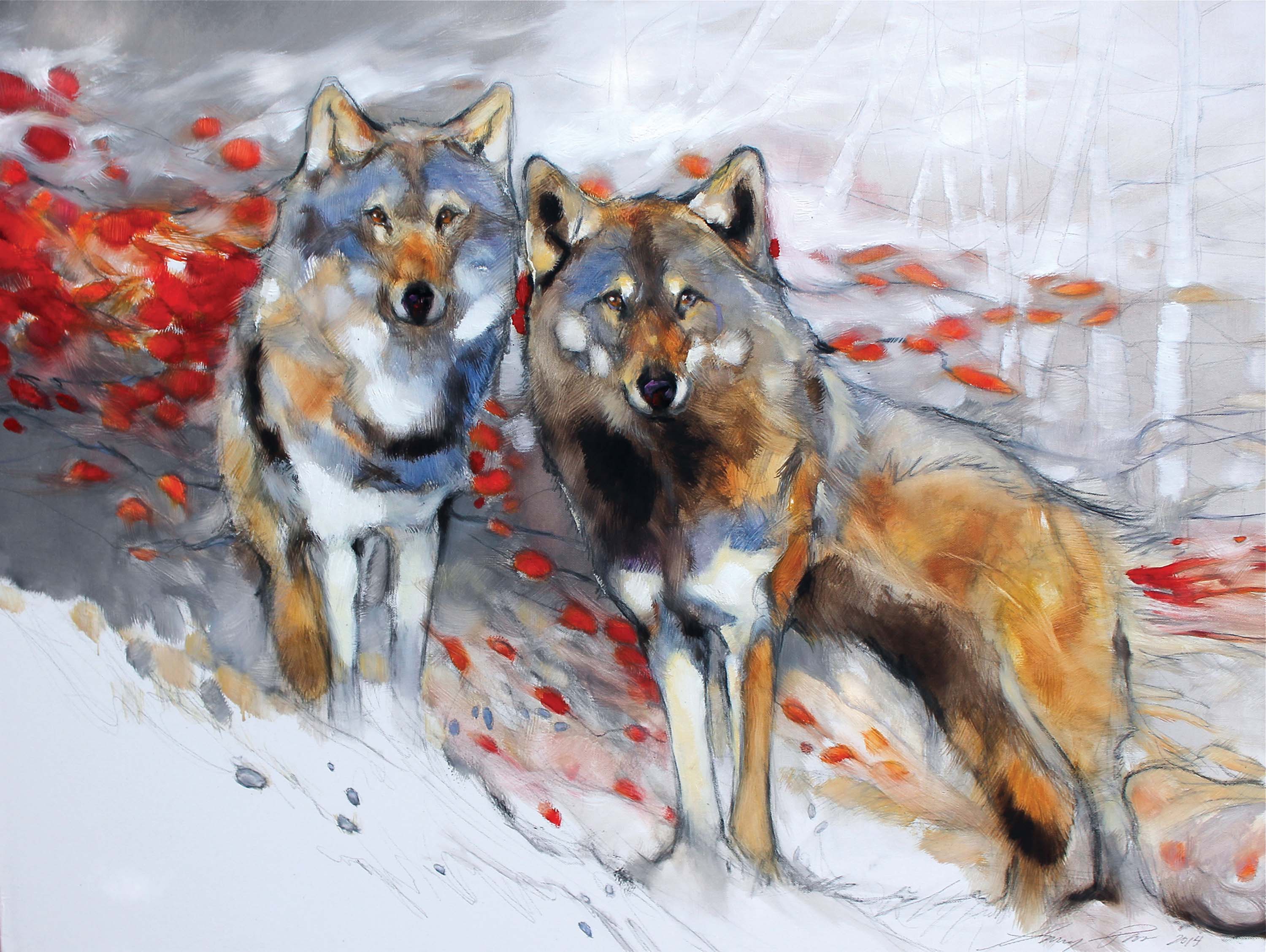 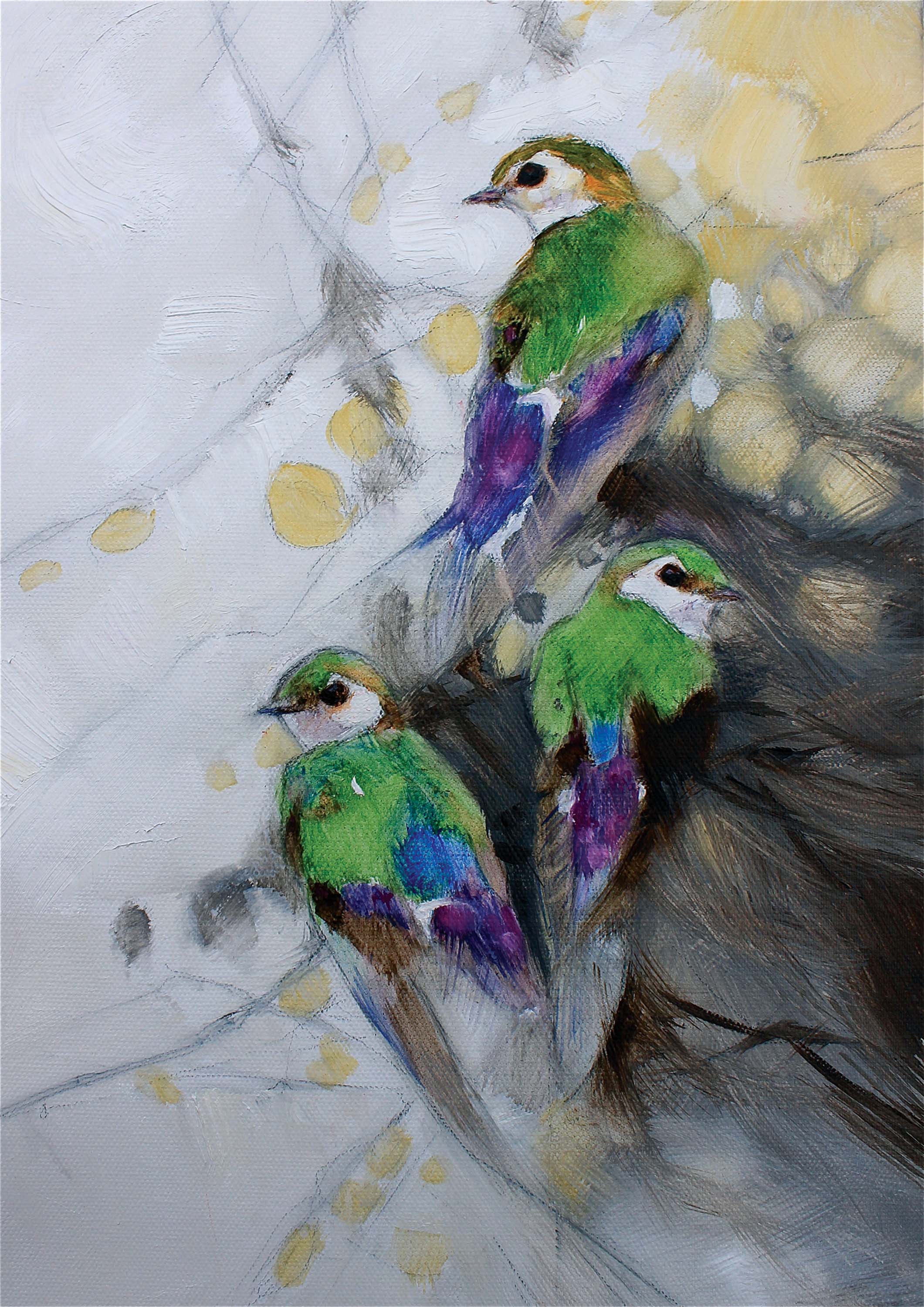 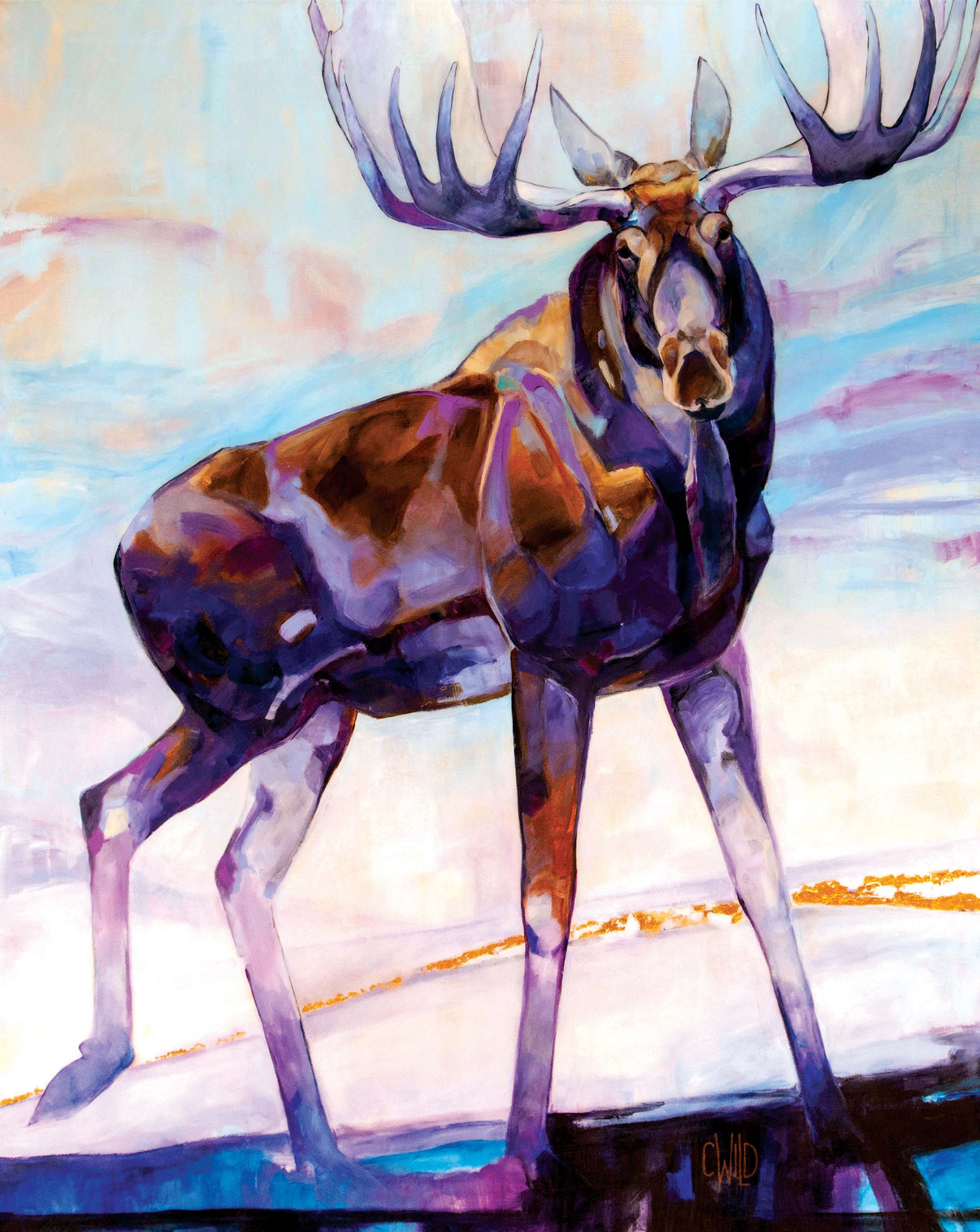 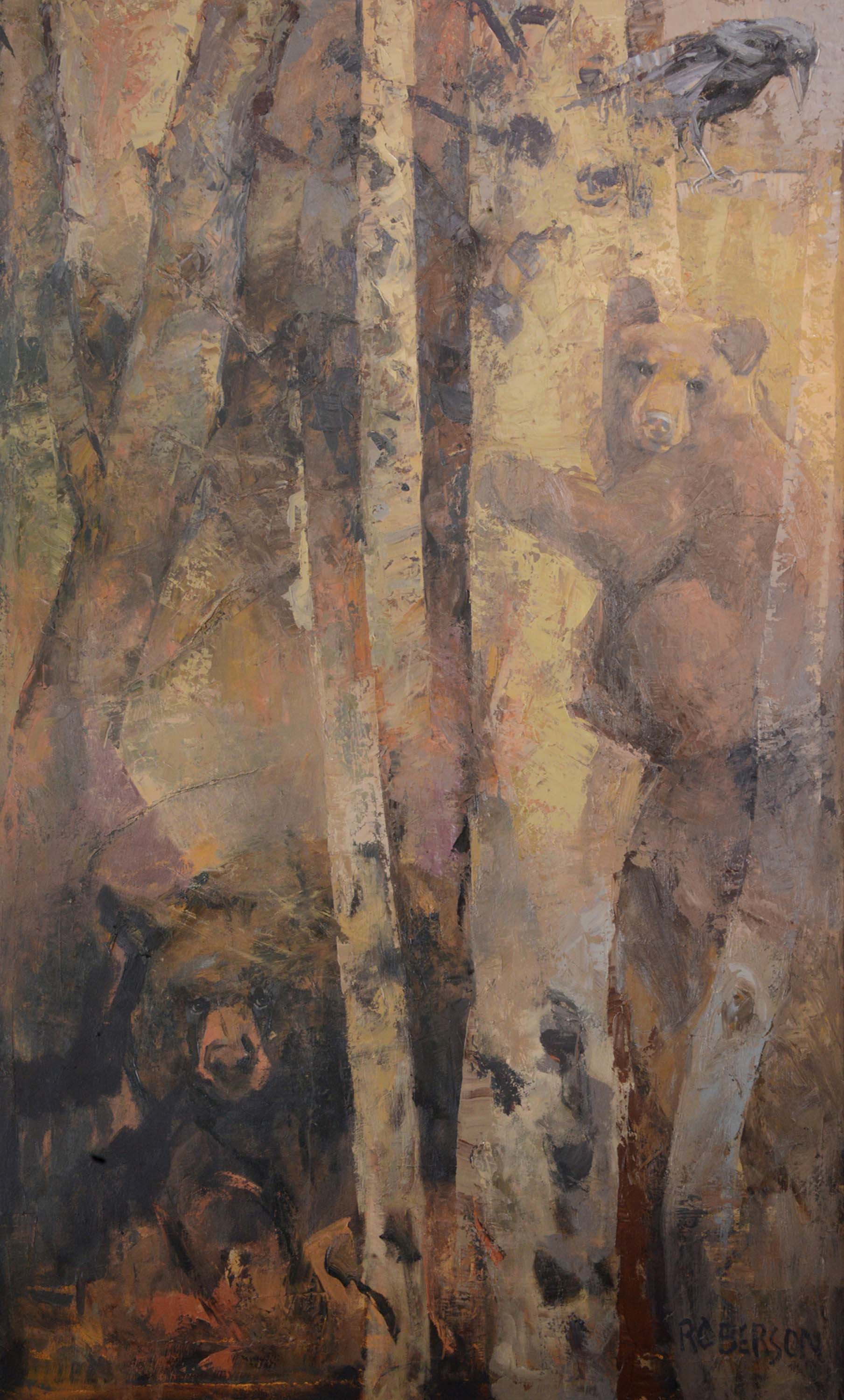 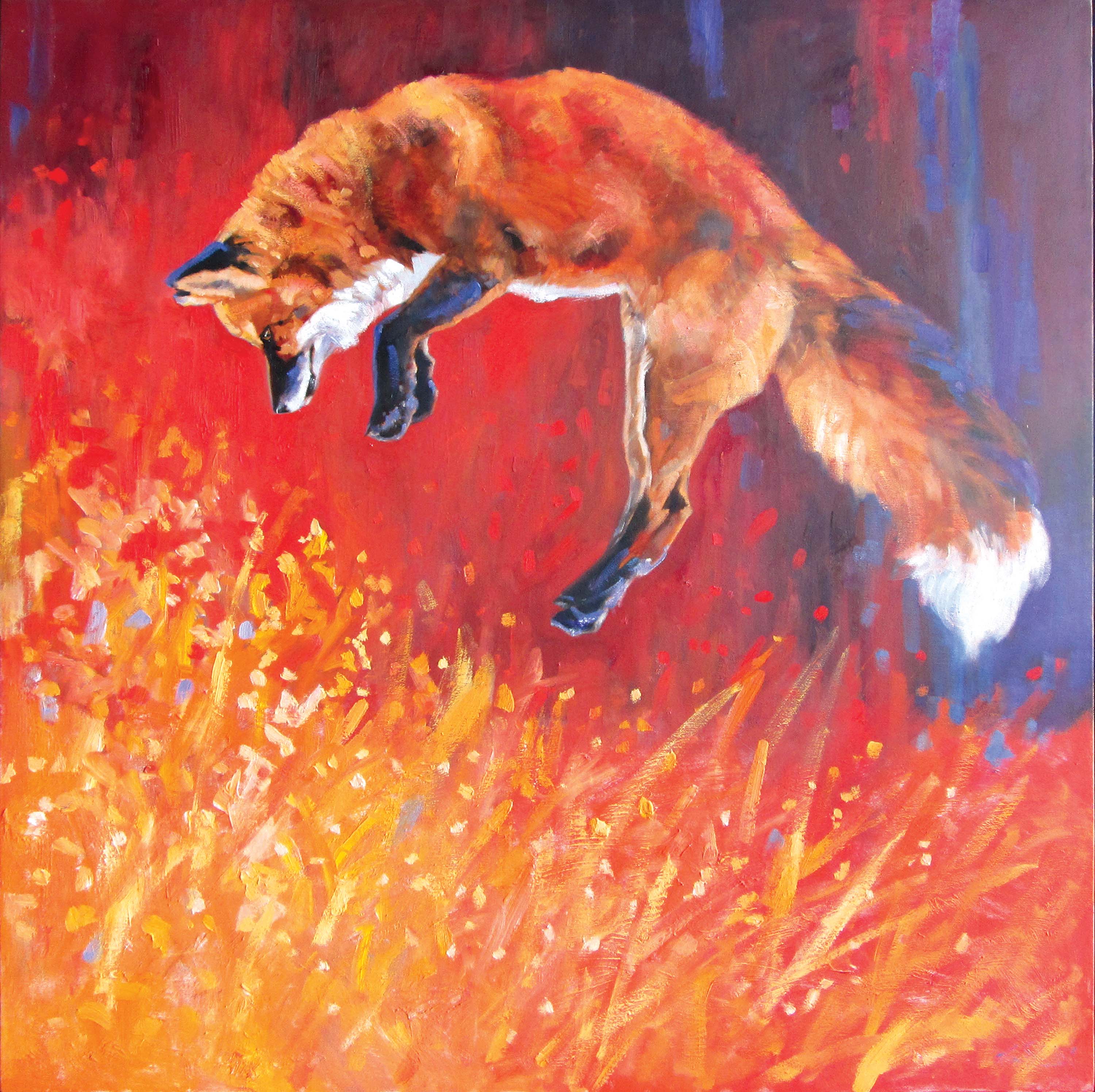 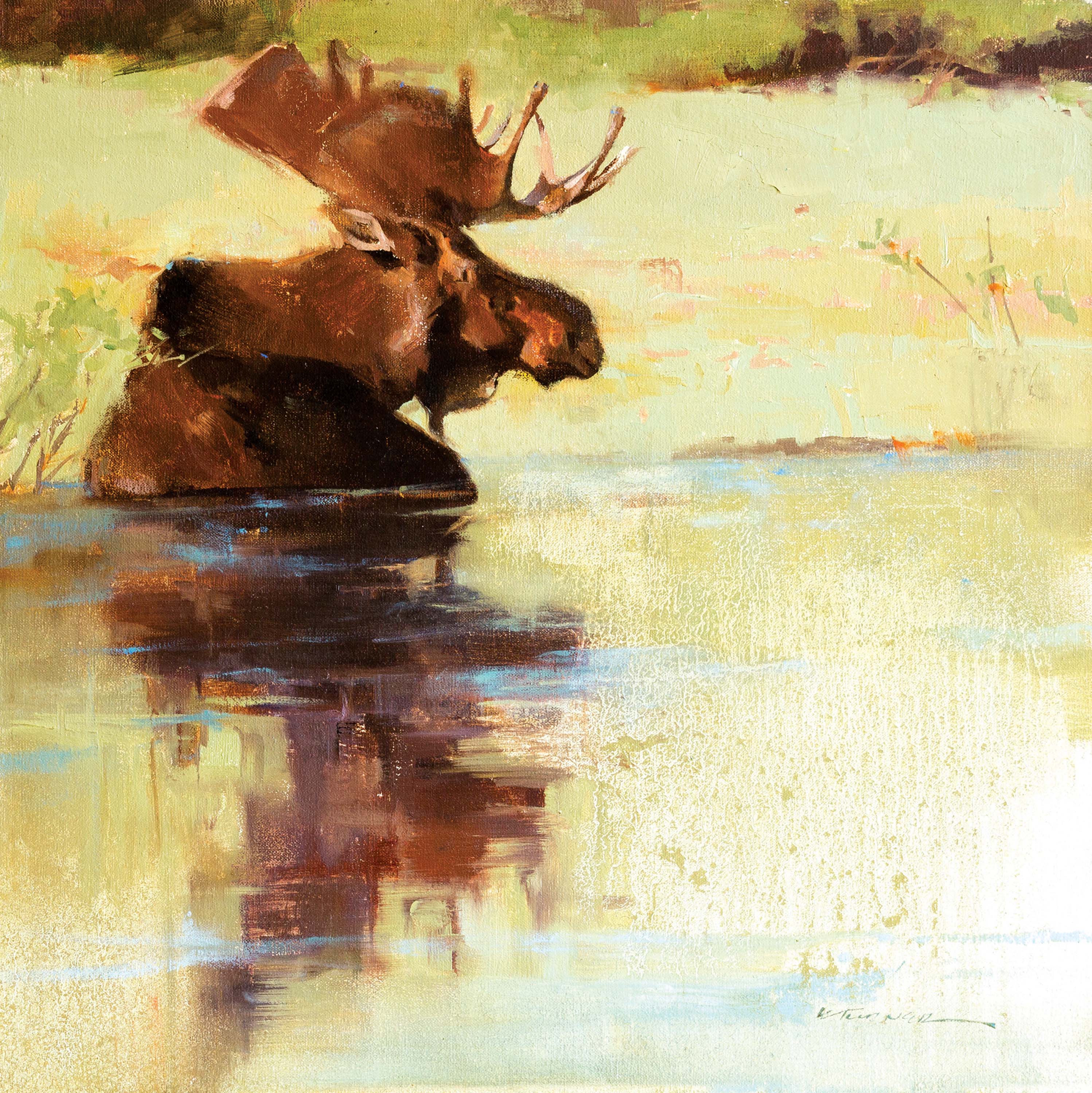 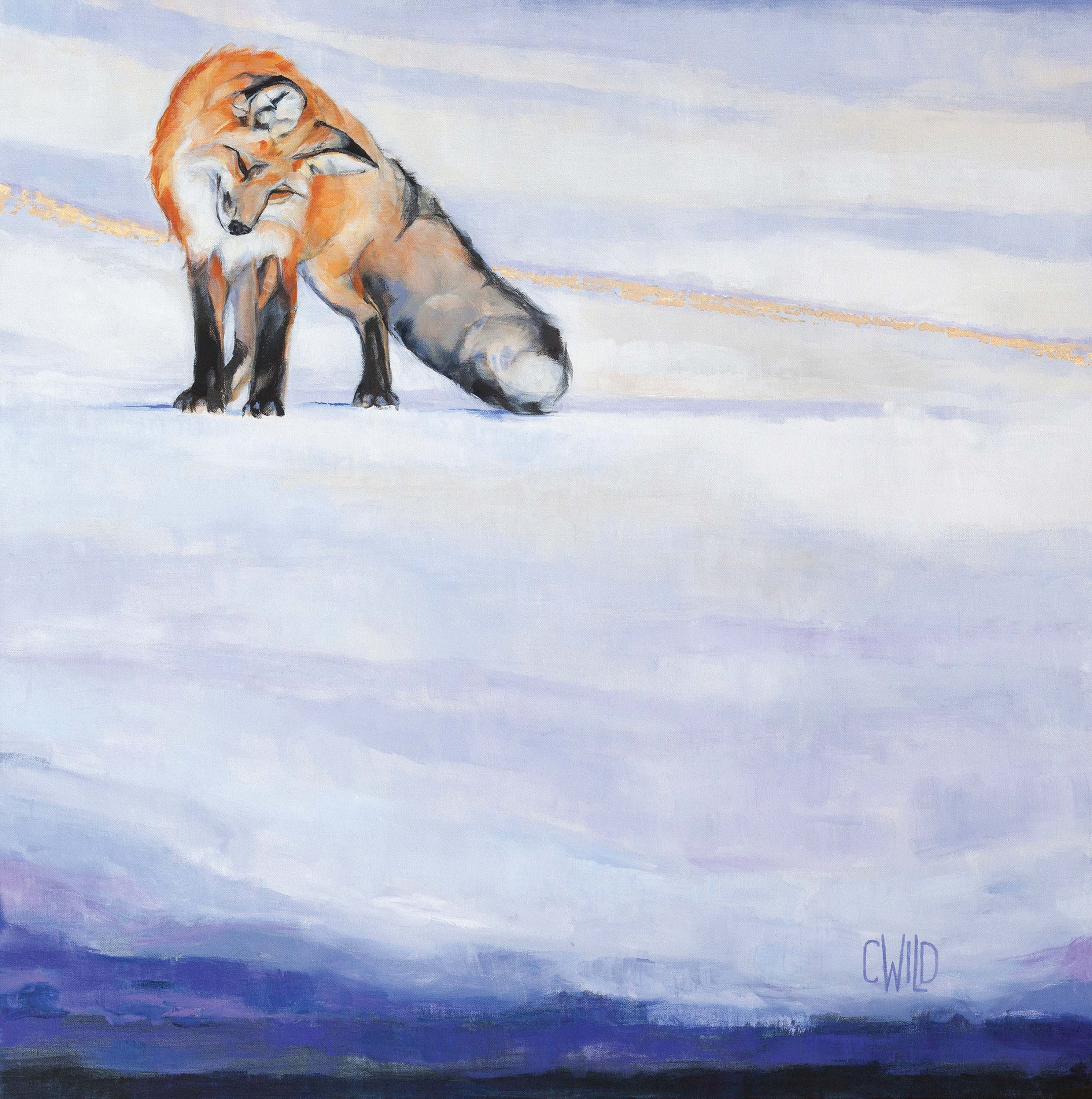 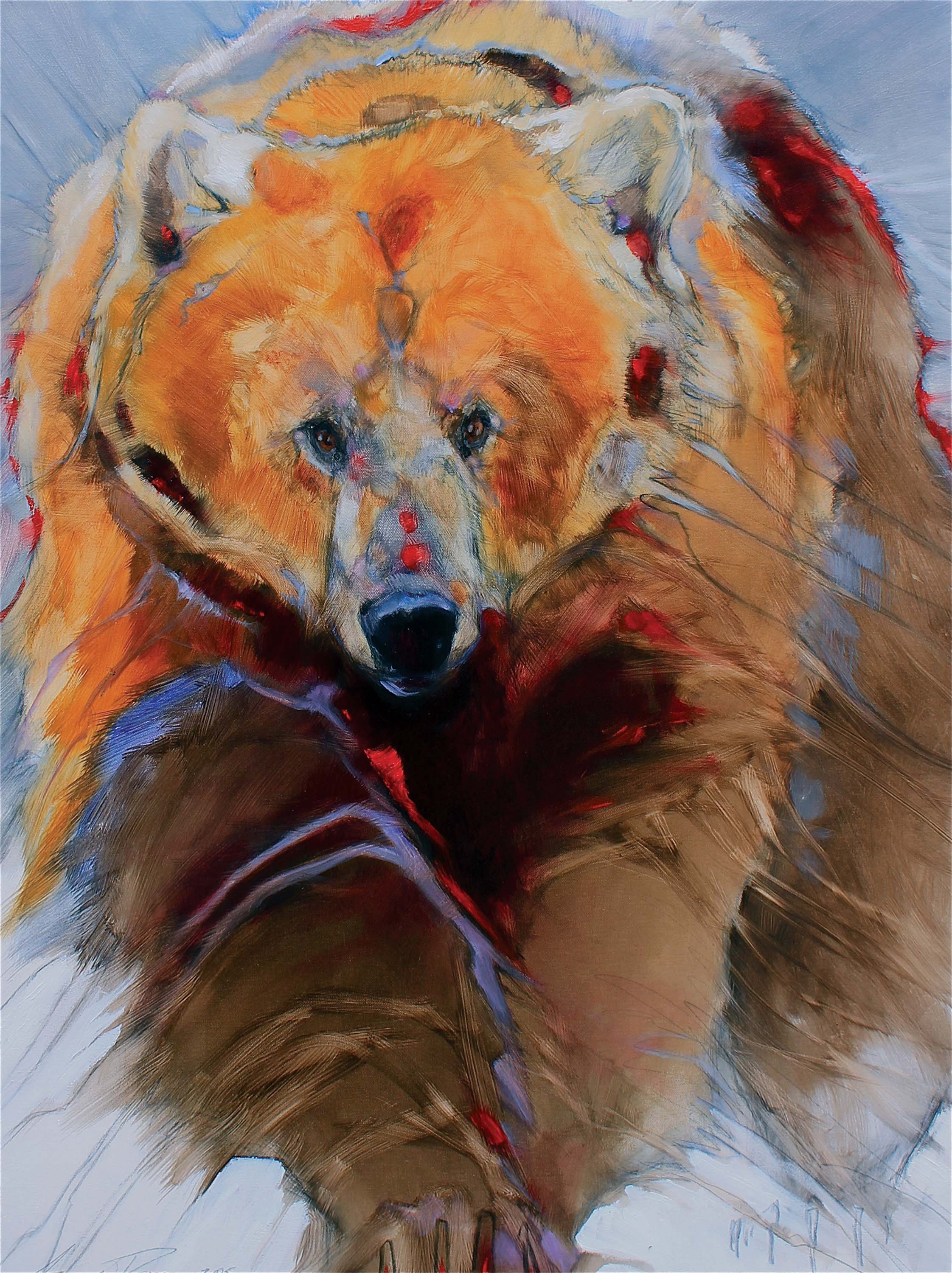 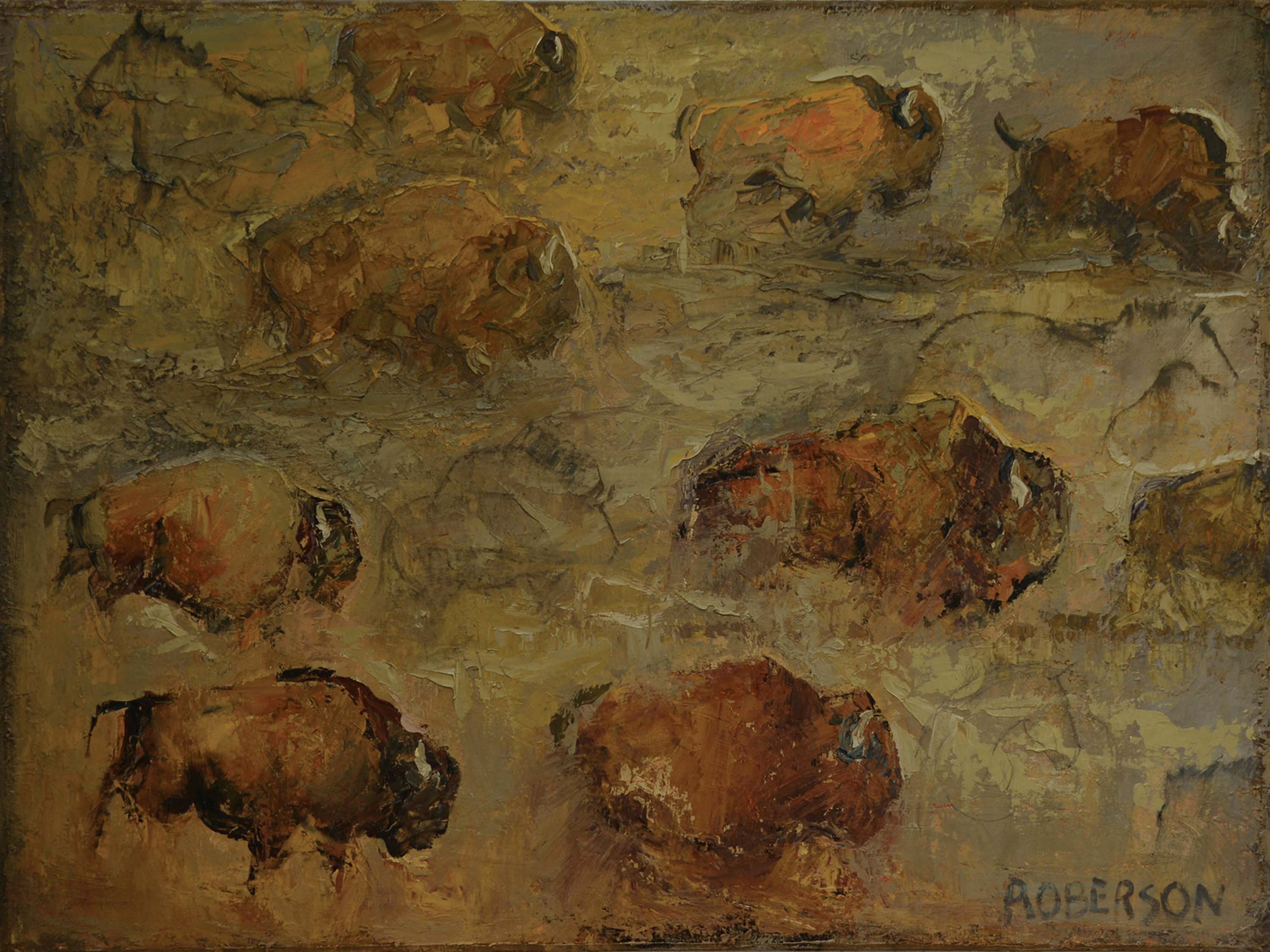 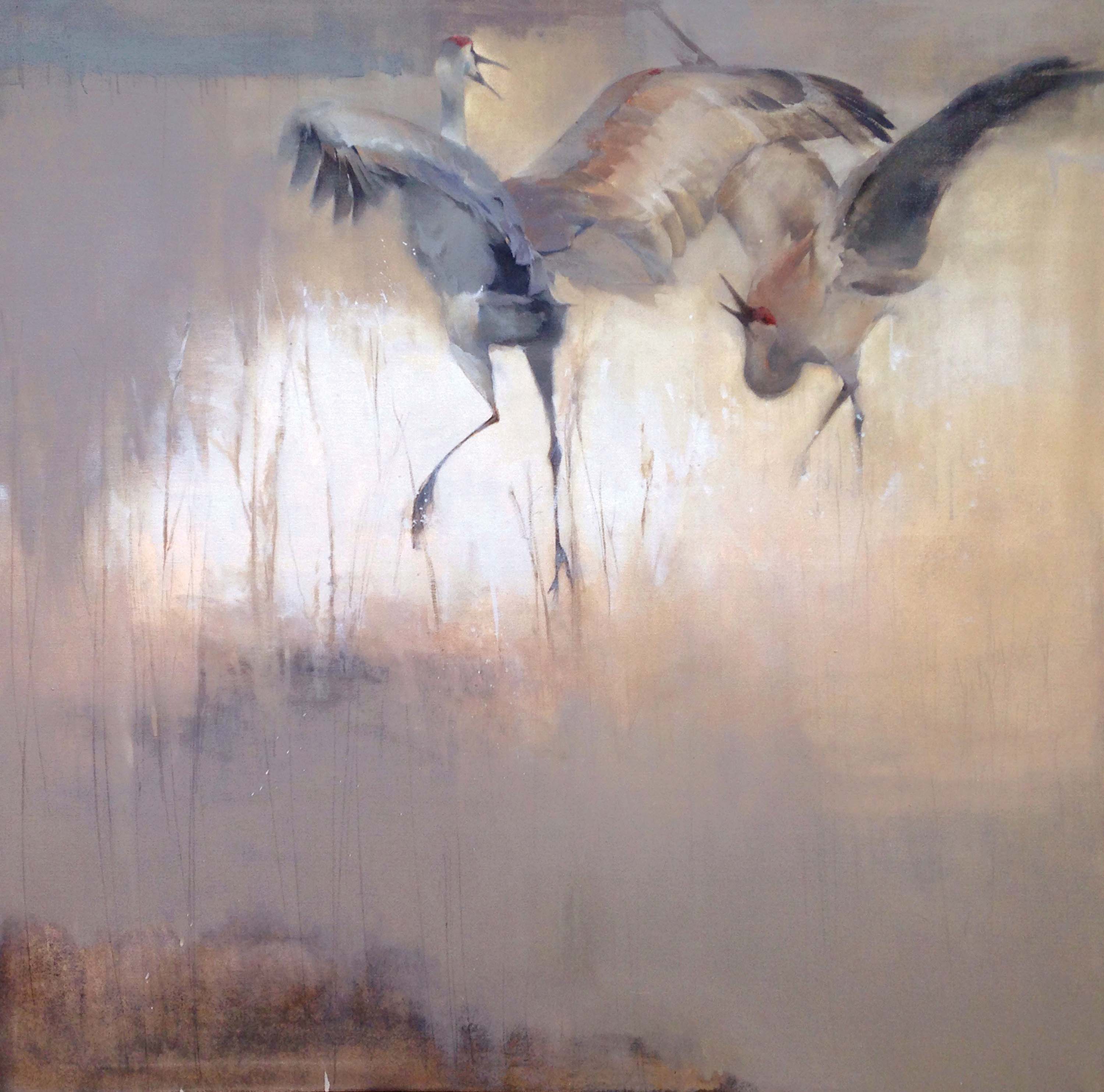