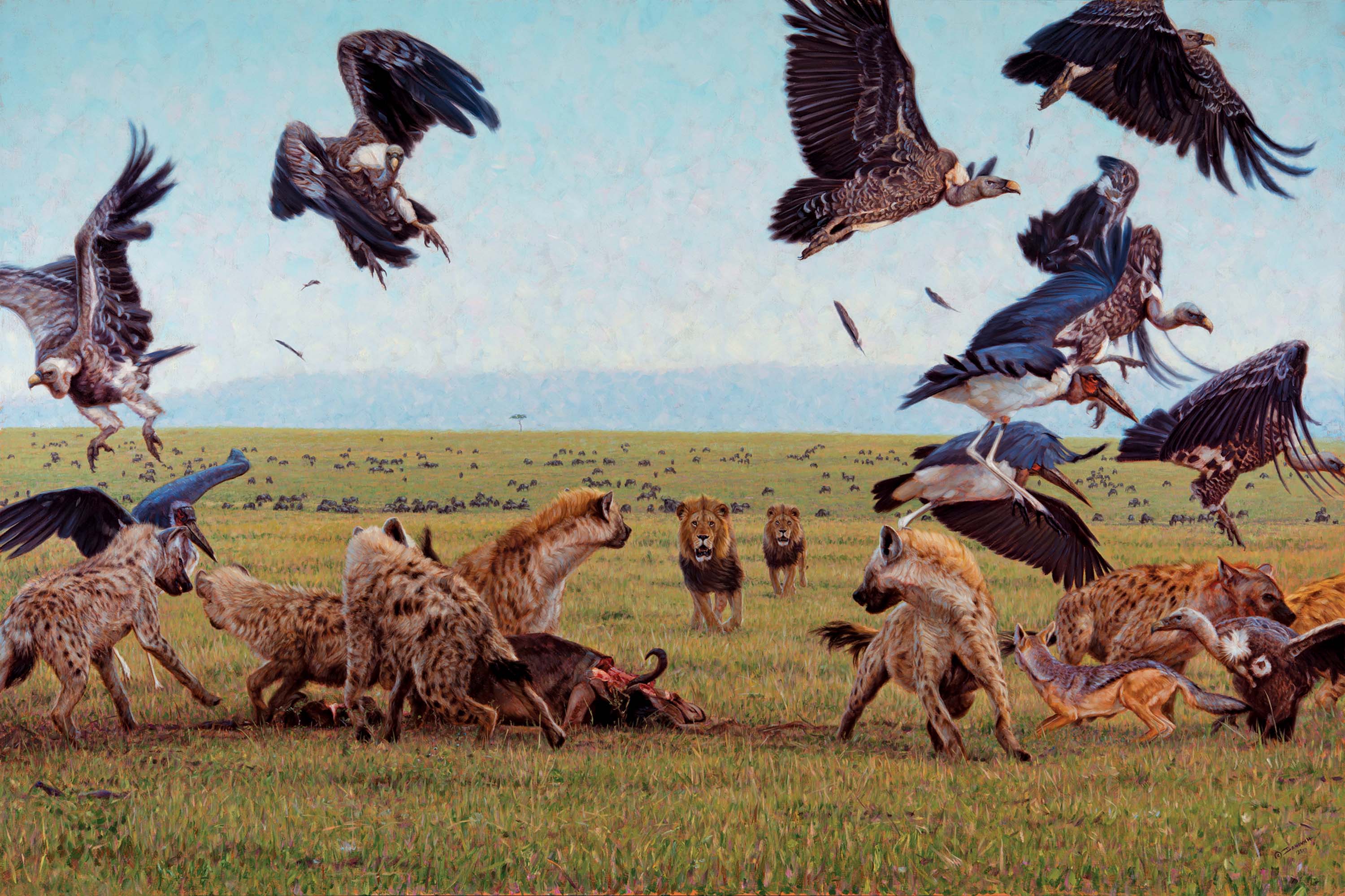 AS A GENUINE CULTURAL PHENOMENON, there are no words adequate to describe the atmosphere of Safari Club International’s annual hook-and-bullet shindig. For outdoorspeople who venture afield in camouflage, blaze orange and khaki, who dream as Theodore Roosevelt and Ernest Hemingway did of embarking upon grand hunting adventures, and who savor the feel of elegantly crafted guns and fly rods, the tribal energy of SCI is akin to a religious revival.

Every winter, hardcore sportsmen and sportswomen by the tens of thousands converge in the Mojave Desert to share stories, book excursions with legendary outfitters and guides, and generally get fired up about saving iconic species and, of course, rally around the Second Amendment.

Although it’s billed as “the Ultimate Hunters’ Marketplace,” SCI’s bazaar is about far more than that, says the organization’s CEO Phil DeLone. “We not only think of SCI as a convention, but also a global homecoming for hunters who are passionate about their sport and the distinctive lifestyle that comes with it.”

The fact that SCI 2015 is being held February 4 to 7 in Las Vegas at the Mandalay Bay Hotel & Casino only adds to its exotic élan. Mixing in the crowd, you could likely rub shoulders with NRA figurehead Wayne LaPierre, rock star Ted Nugent, a Saudi sheik who flies falcons, a champion NASCAR driver, decorated U.S. military generals, professional athletes, high-powered corporate CEOs or TV celebrities from Fox News.

Down one showroom aisle, an explorer can talk record-book animals at a booth operated by the Boone and Crockett Club, meet with a tweed jacketed representative of London-based James Purdey & Sons firearms, chat with the best hunting dog breeders in the land, or buy a bottle of beautifully aged Scottish whisky. Scattered around as décor, one is guaranteed to encounter some truly astounding feats of taxidermy: full-body action mounts of African elephants, grizzly bears, big cats, crocodiles, predators battling prey — and sometimes other predators — and every kind of horned and antlered creature under the sun.

For fine art lovers who prefer animals rendered in bronze and oil, SCI is a diamond in the rough, a venue where discriminating collectors have an opportunity to find some real treasures. In fact, there are a few high rollers who head to SCI just to enjoy the company of their favorite contemporary painters and sculptors.

“There’s no other show in the world where one can find such an assemblage of big safari-type animals represented in fine art — not at any auction or museum show,” says artist John Banovich, known for his gigantic wildlife paintings that often cover entire walls.

“SCI attracts a high caliber of very successful yet down-to-earth people who, in their own businesses, are at the top of their game,” Banovich adds. “Artists come here to have their work seen. For someone like me who enjoys going into the African bush and portraying the continent’s emblematic animals, I couldn’t find a more enthusiastic audience.”

Banovich credits the SCI show with igniting international interest in his career 21 years ago. The dashing, ponytailed painter has his own sprawling booth — one of more than two dozen different galleries representing hundreds of artists from every continent except Antarctica.

This year, Banovich returns to SCI with another epic: a 75-by 50-inch stunner, titled Game of Lions, that functions as a massive window into the savannah of East Africa. As tens of thousands of wildebeest thunder across the plain, two huge male lions dart toward the viewer amid a tangle of hyenas, vultures and Marabou storks.

In 2015, famed sculptor and cowboy-sportsman T.D. Kelsey, whose masterworks can be found in a half-dozen museums across the West and in prominent private collections, makes his return to SCI after a five-year absence. Some of Kelsey’s new bronzes are being exhibited at the Call of Africa Gallery booth.

Call of Africa, which operates in both Jupiter and Naples, Florida, is unveiling the first part of a multiyear exhibition called The Great Zambezi. The show features paintings by African artists David Langmead and Jaco van Schalkwyk, and sculpture by Mopho Gonde, all celebrating the wildlife-rich Zambezi River corridor. Gonde, a Ndebele, has been called the Michelangelo of indigenous carvers in southern Africa for his classical depictions of megafauna. All three will be present in Las Vegas.

Gallery founder Ross Parker also plans to have live painting demonstrations by John Seerey-Lester, who has gained critical acclaim for his historic hunting camp scenes portraying Theodore Roosevelt. T.D. Kelsey will be on hand to talk about his hair-raising hunting escapades flying across Sub-Saharan Africa in a bush plane.

Another highlight is a sneak preview of painter Brian Jarvi’s ambitious, multiyear magnum opus, An African Menagerie. When completed, the visually interlocking project — which stretches 27 feet across — will feature seven monumental paintings with panoramic portrayals of more than 140 African species. Jarvi is also offering more than 100 exquisite studies and pre-studies for sale. A special museum tour is being planned for An African Menagerie, and Jarvi says the intent is to heighten public awareness about the plight of African mammals and birds.

“Americans understand keenly the role that fine art has played in our history, in making society realize the urgency of critical moments when the survival of species and wilderness hangs in the balance,” Jarvi says. “Were it not for Thomas Moran, we might not have Yellowstone today.
Had other romantic painters like Bierstadt, Remington and Russell not documented the dire outlook facing bison and elk on the frontier, Theodore Roosevelt wouldn’t have been able to marshal our hunting forefathers into action — and have it register in Congress. The wildlife crisis happening right now in Africa is a metaphor for something bigger.”

In terms of bringing together a concentration of potent resources — financial, human and political — SCI is a place where the power of art fuels visionary conservation, Jarvi says. “SCI operates globally on the front lines of wildlife conservation, not only here at home in the United States, but in many far-flung places that most people don’t often think about. The sporting art sold helps raise awareness and generates funds for bettering the prospects of wildlife on the ground,” DeLone explains, adding that millions of dollars have been raised over the years through the proceeds of art sales to benefit conservation and to battle poaching, which is taking a grim toll on elephants, rhinos and lions.

“No matter where they’re from, there is a common identity our members feel in their hearts, a sense of mutual belonging and stewardship,” he explains. “Great art is yet another element that unites us. You can vote for the things you value with your wallet, take home something that inspires others and change the world.” 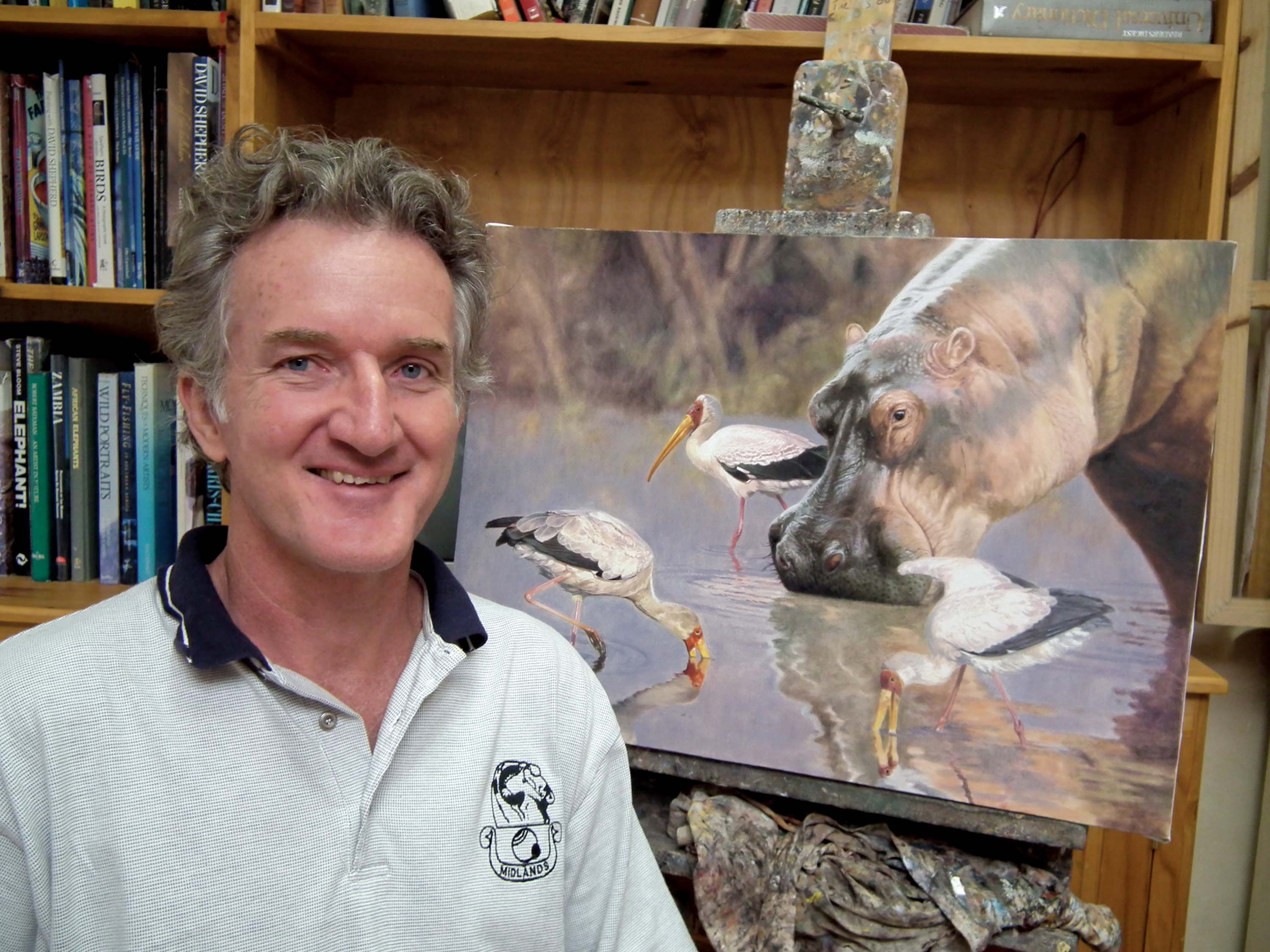 A native of Zimbabwe, David Langmead finds inspiration in the land and skyscapes of his homeland. 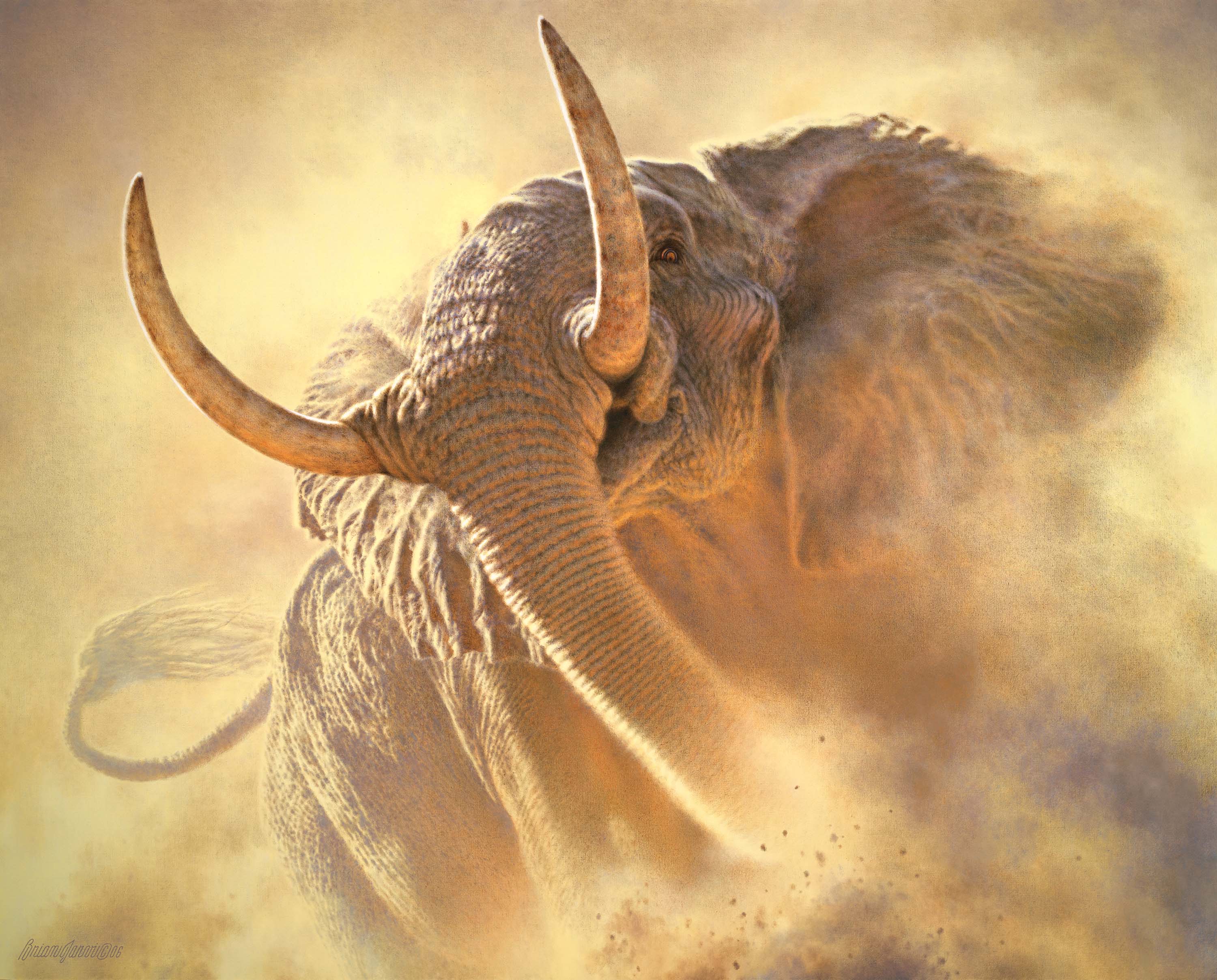 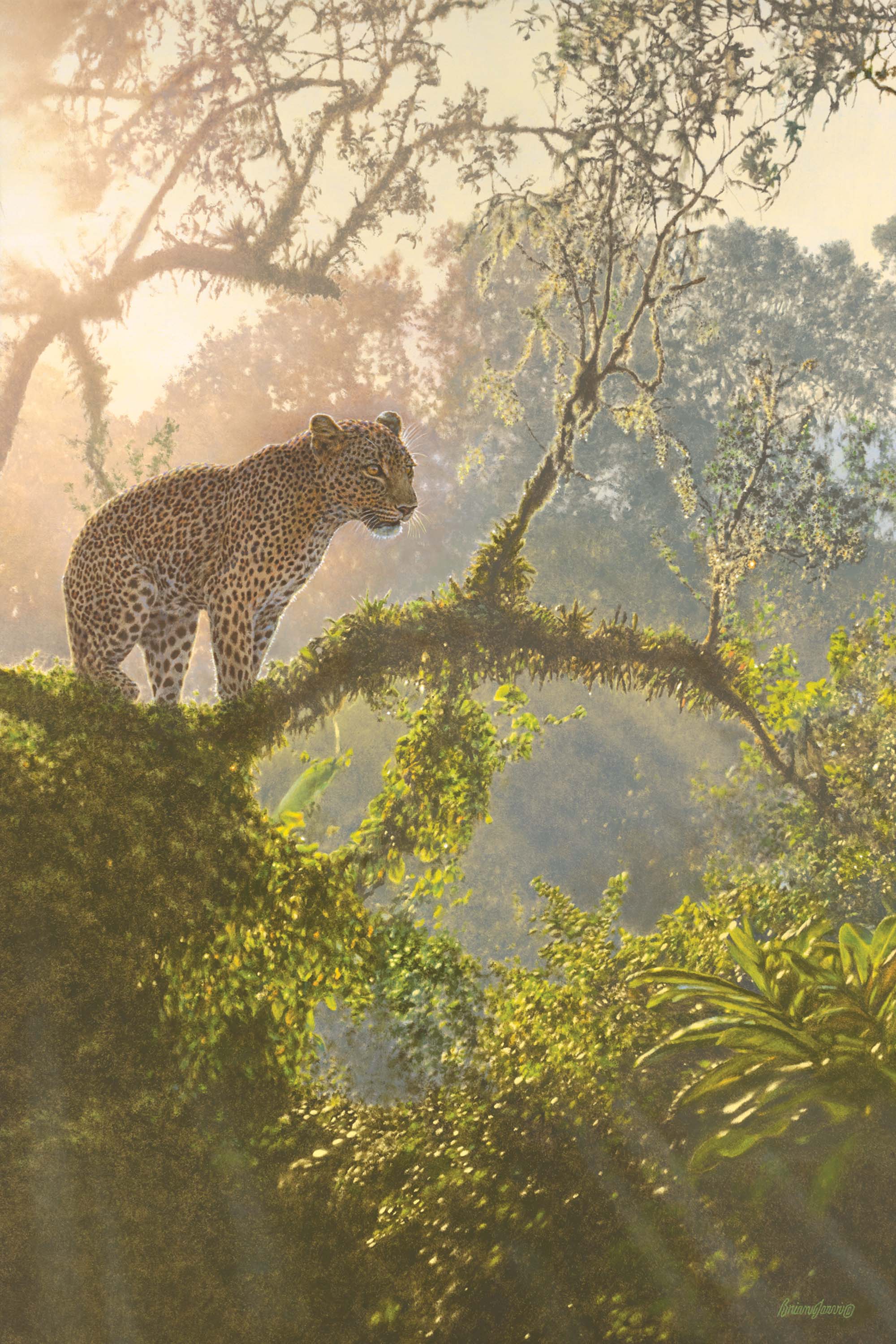 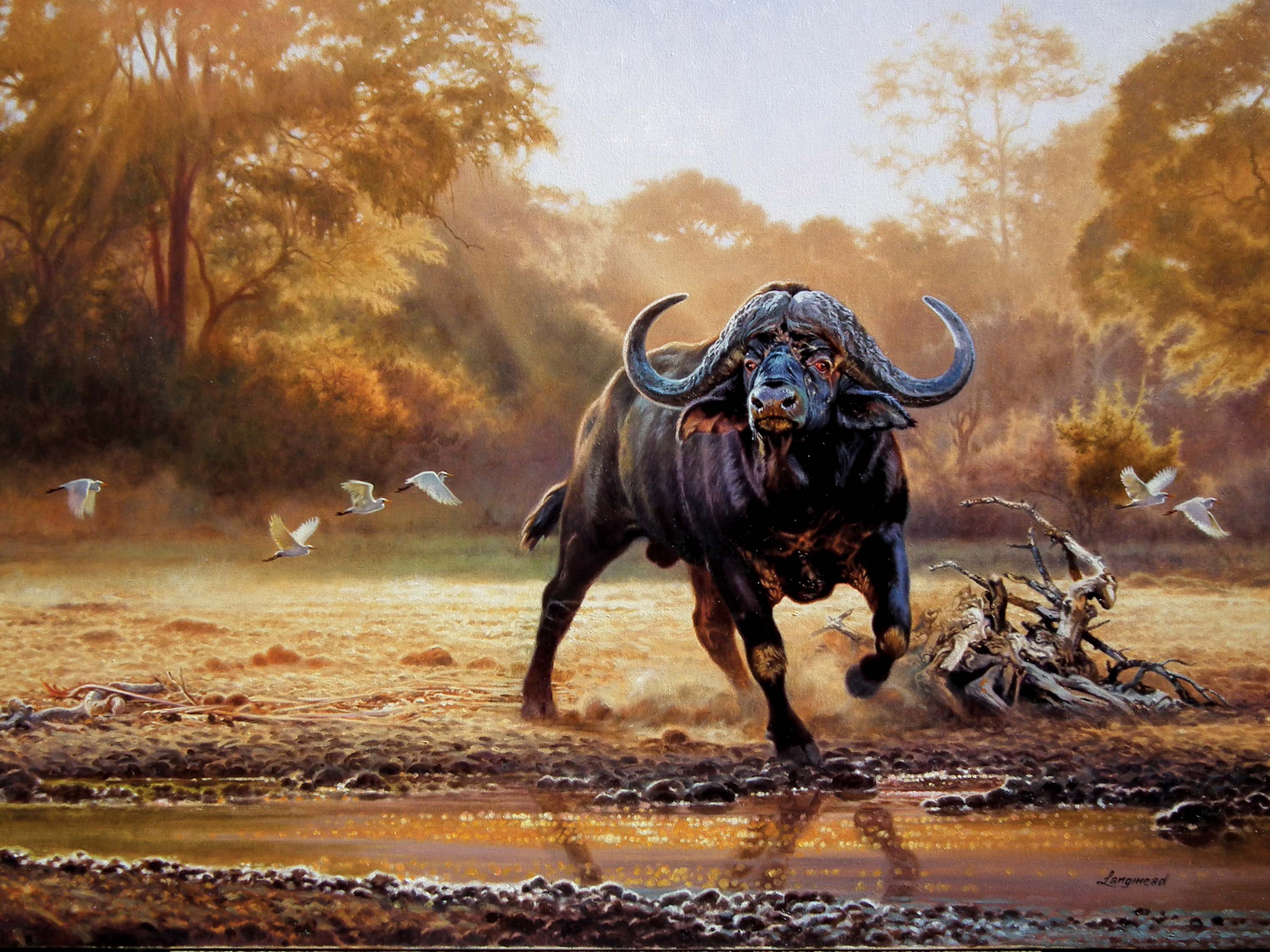 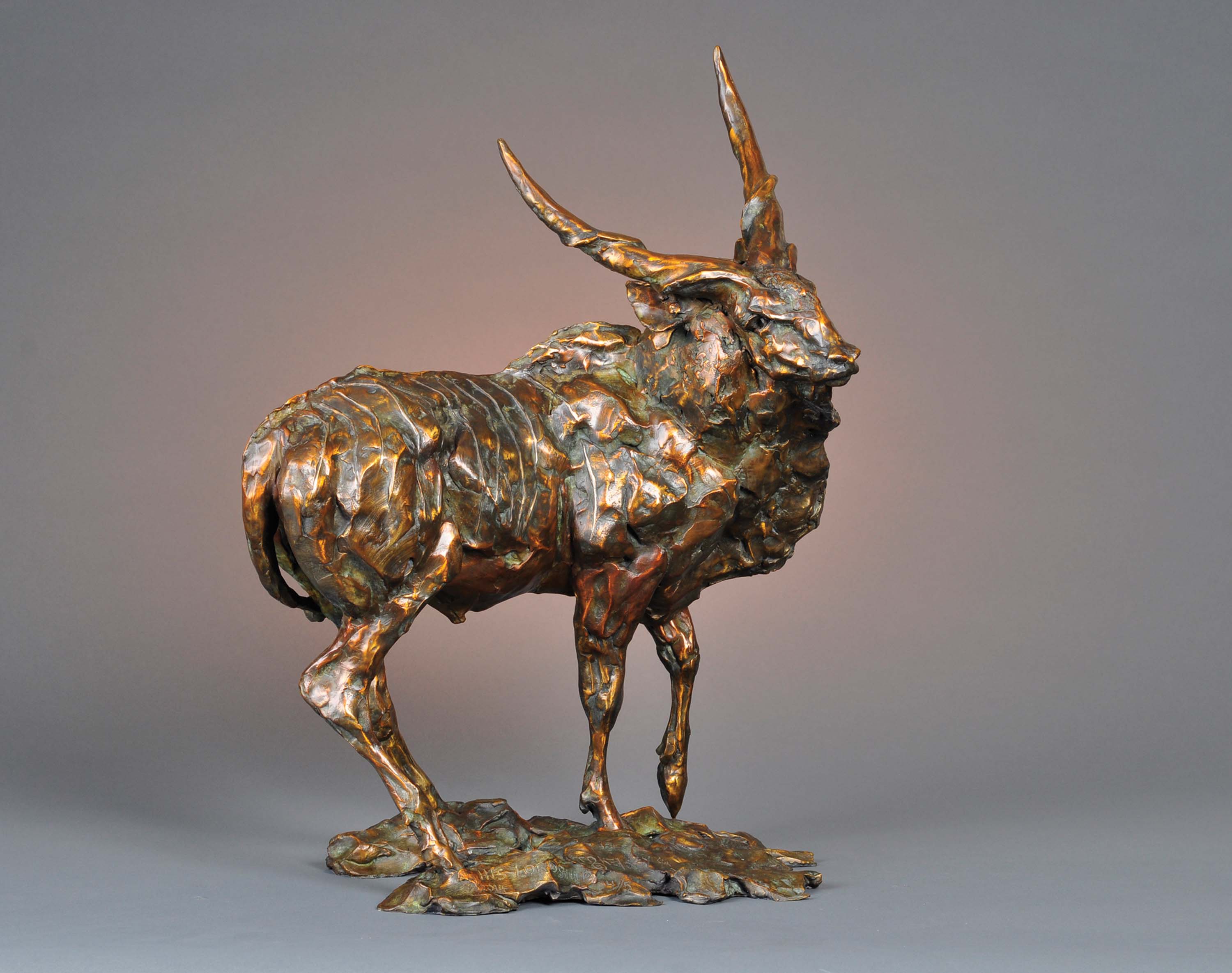 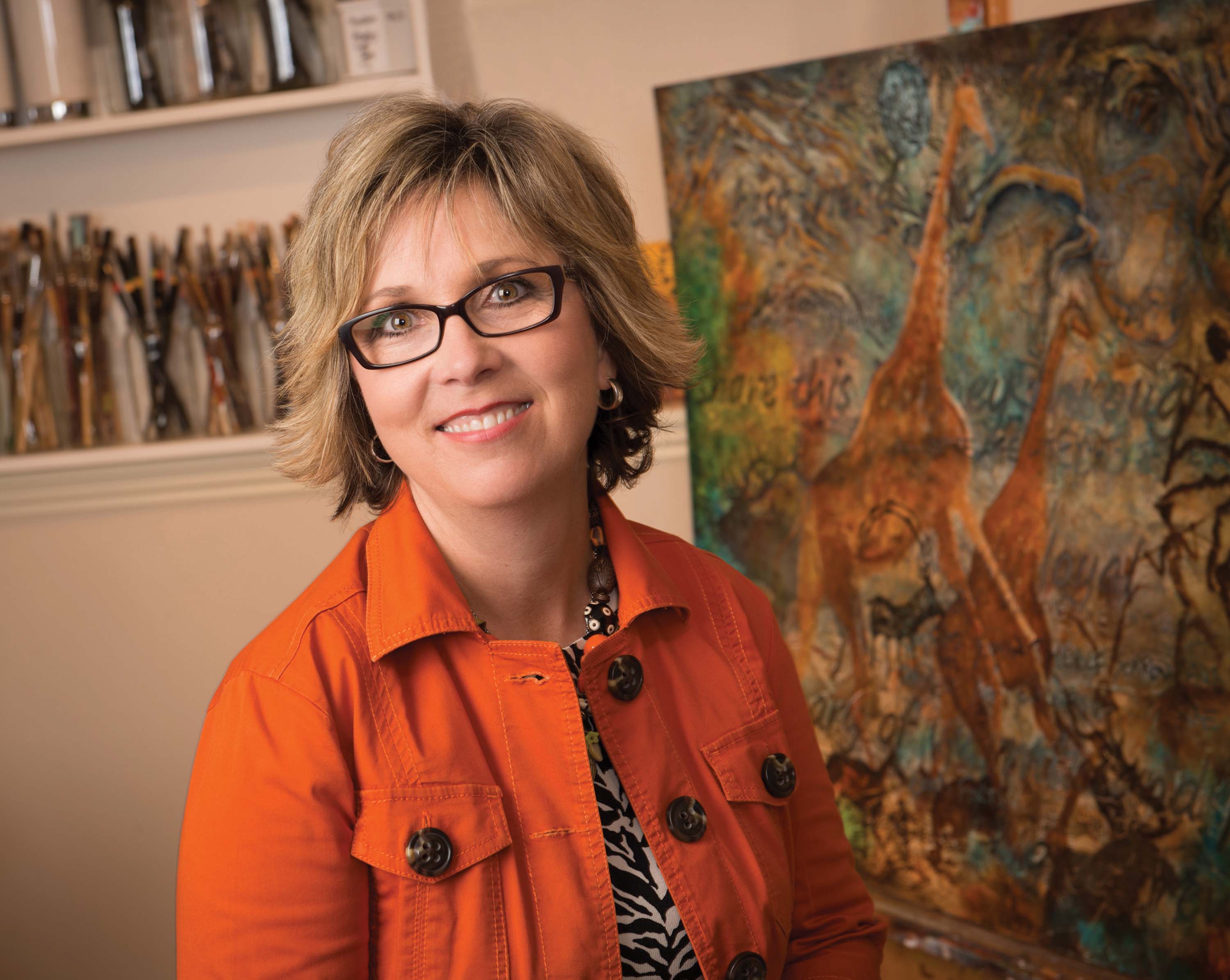 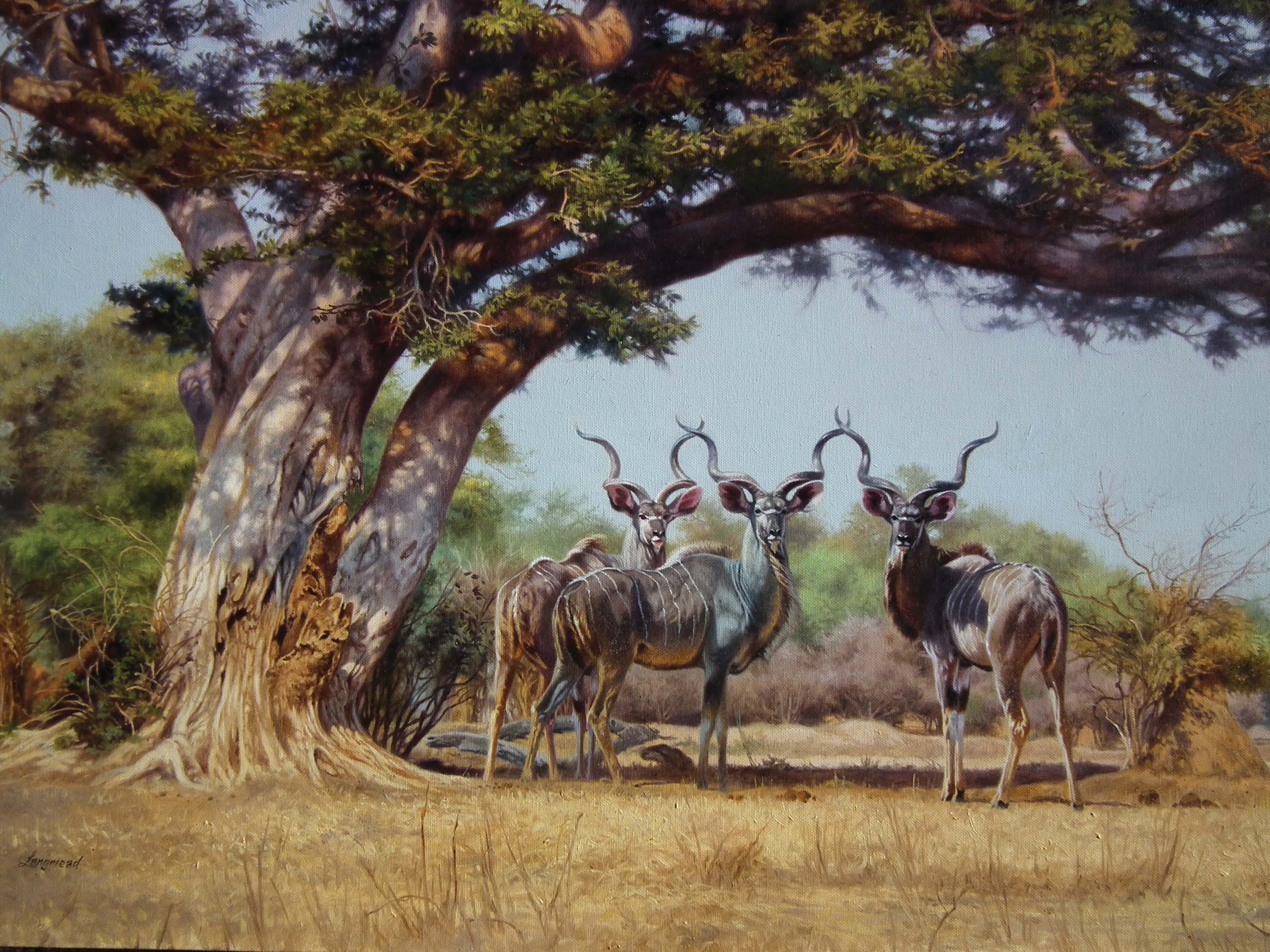 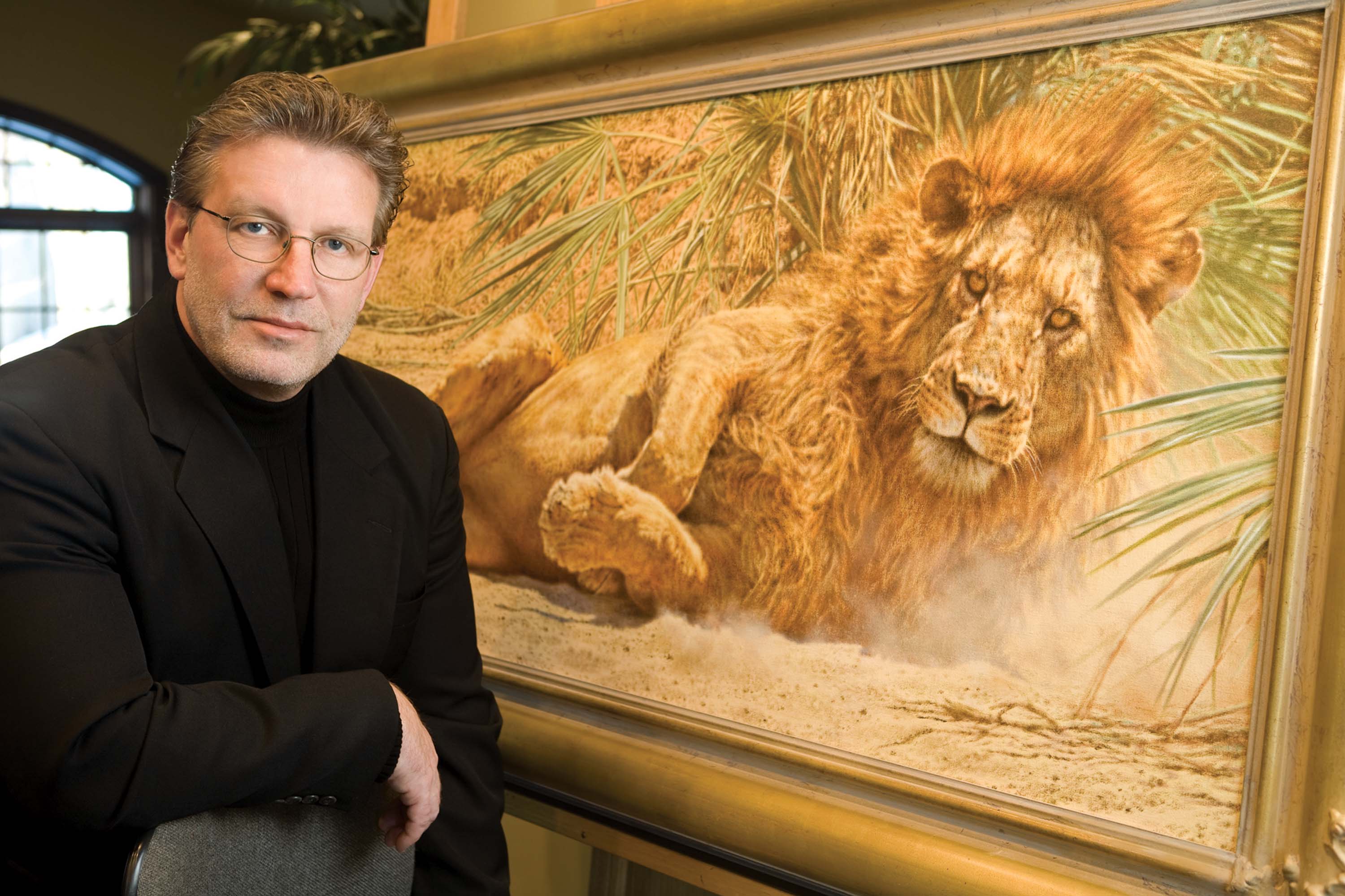 Brian Jarvi relies on personal experience for the subjects of his up-close-and-personal compositions.