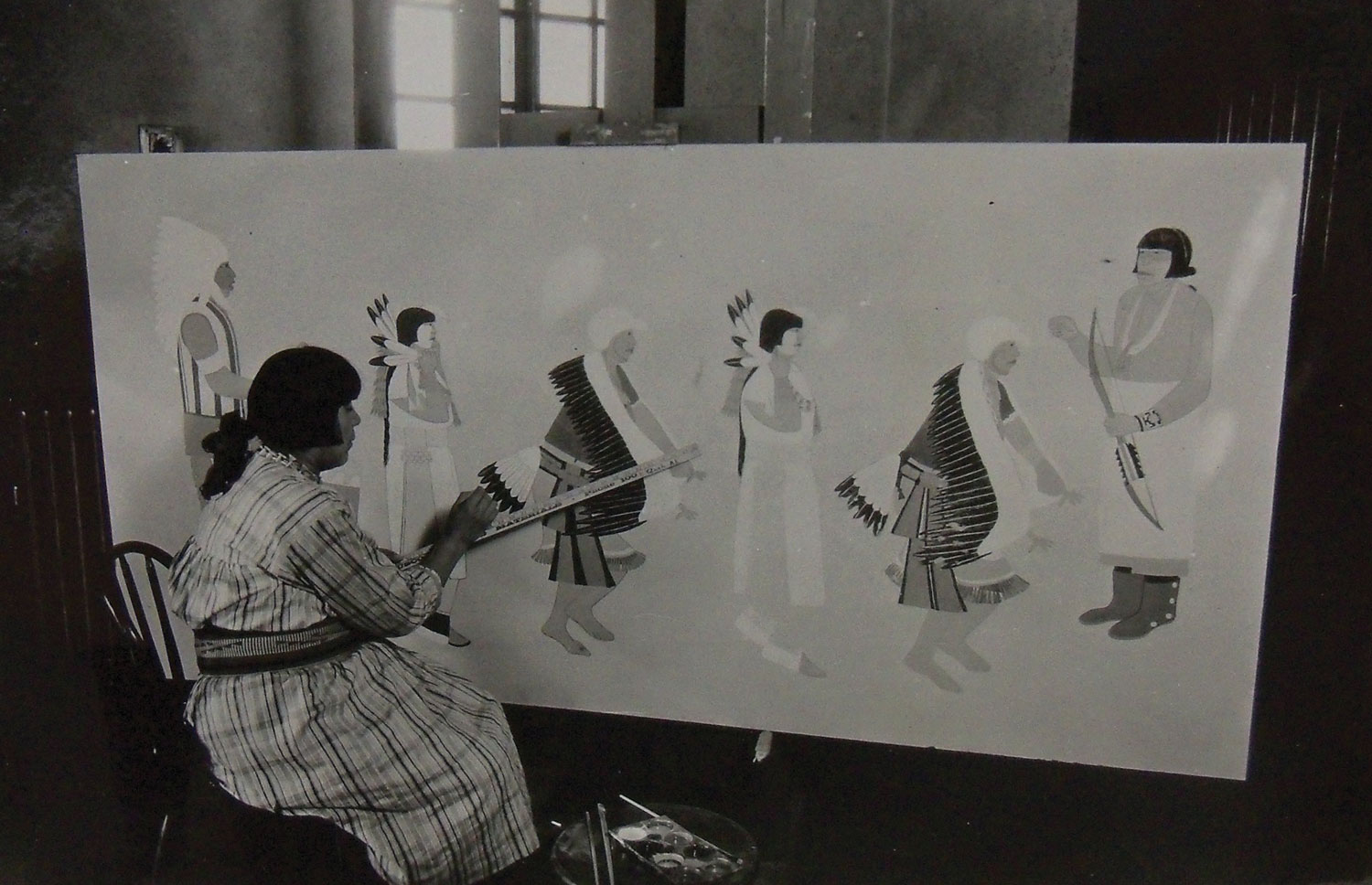 In 1921, the federal government banned the Pueblo tribes sacred “pagan” dances. About the same time, a San Ildefonso woman started painting pictures — though only men of her tribe were supposed to paint. That artist, Quah Ah, captured the defiant, inner strength of her community. She painted the dances.

“I would say she is a monument to her people,” says contemporary Hopi artist Riley Sunrise (Quoyavema), quoted in a 1994 article in the American Indian Quarterly. He heard Quah Ah explain to children watching her paint, “Don’t draw anything that isn’t true to the Indians, because this will tell what beautiful things we have.”

Quah Ah, whose name means white coral beads, and who is often referred to by her Spanish-assigned name, Tonita Peña, became a bridge between her San Ildefonso Pueblo and the outside world. Her timeless watercolor and ink pictures touched new art lovers who came to New Mexico by railroad, and her artwork changed opinions and helped to defend Pueblo culture, even as Quah Ah was accused of selling it out. 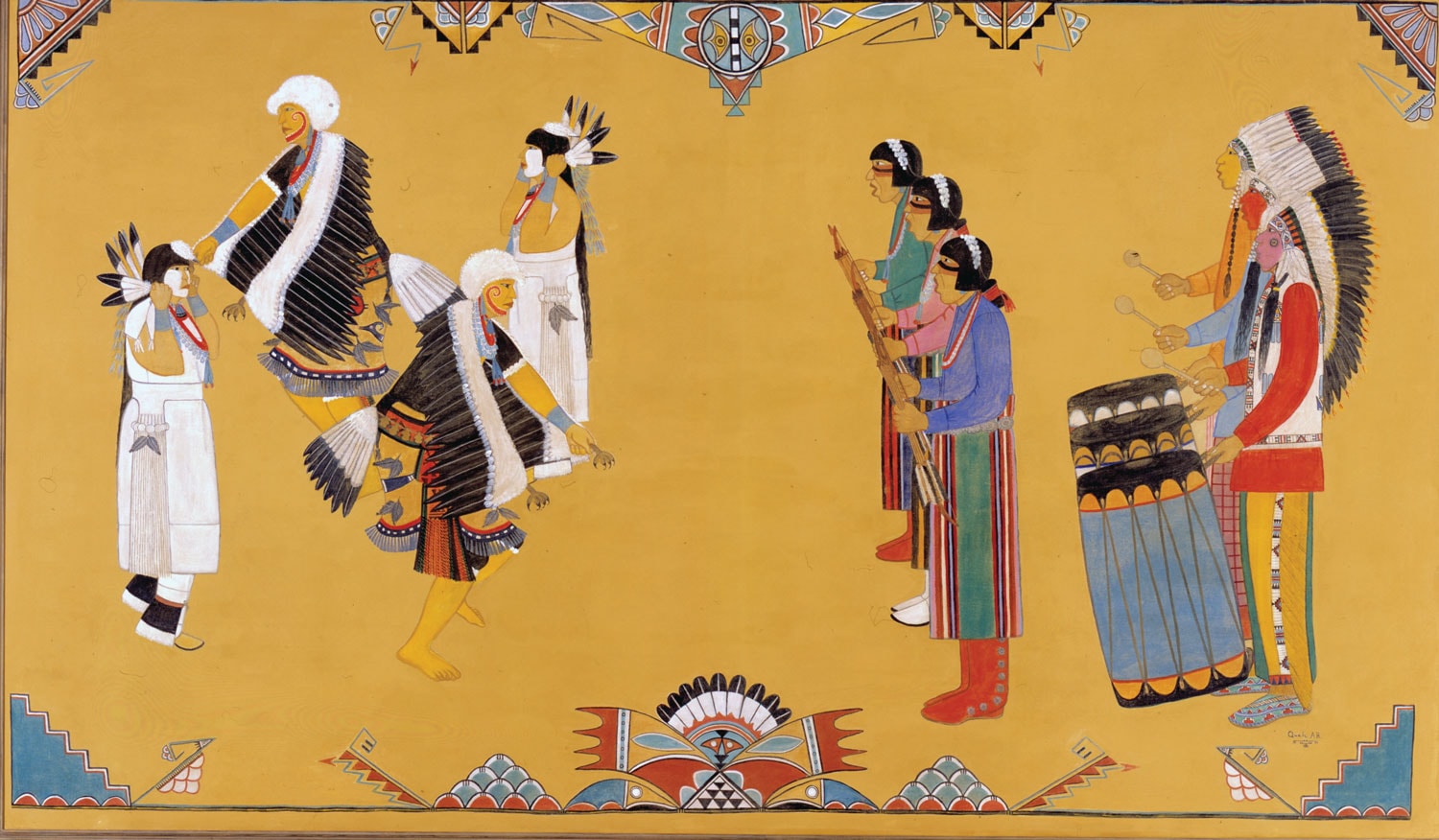 The artist portrayed the sacred cycle of life by focusing on figures performing rituals without a background. She painted her love for the corn dance, and she painted men and women as equals, performing tasks they believed would create harmony with the spirits. This sense of harmony also came through in her brushstrokes.

“Corn dance is a special time in June and again in August to thank the Great Spirit for our crops and for nourishing our bodies; acknowledging the creator for what she has done for us,” says Tim A. Martinez, San Ildefonso elder and tribal council member.

Quah Ah’s paints, made from local pigments and yucca root, crackled with the New Mexico sun. Her compositions aligned the dancers in ceremony and movement. On stark, blank paper or canvas, the richly colored imagery felt elevated from everyday life. 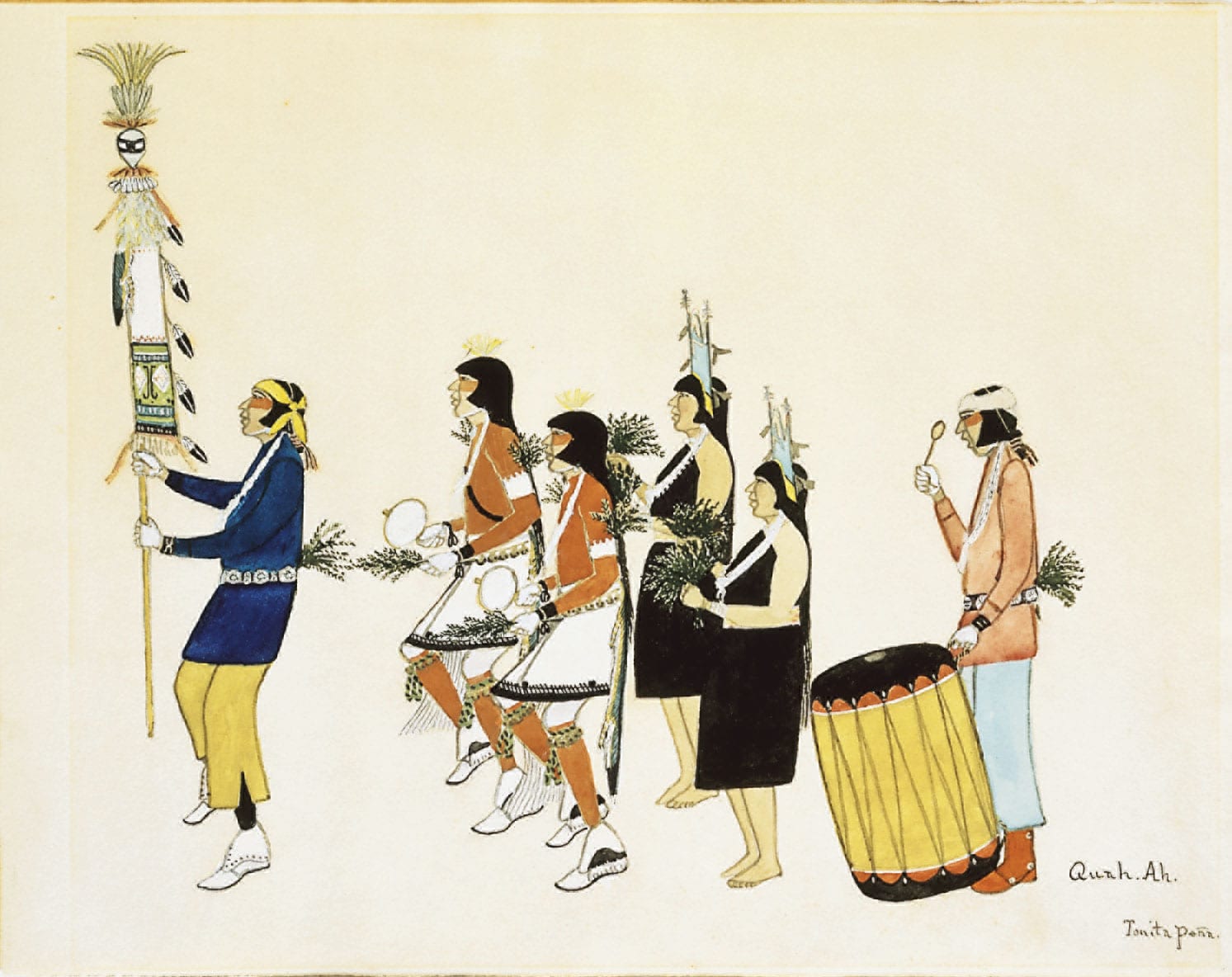 With a profound talent for flat perspective, she conveyed motion along with something that felt divine. Art historian Marilee Jantzer-White believes this flatness reflected a central world view of the San Ildefonso Pueblo, a reciprocity in relationships, with no need to dominate. “The paintings’ … two-dimensional flatness project a sense of timelessness and otherworldliness,” says Jantzer-White. The dances were a sacred duty, and Quah Ah’s reverence for them came though.

Drawing at an early age, Quah Ah was introduced to watercolors by the teachers at the San Ildefonso Day School, and adapted an ink-and-watercolor technique, despite accusations of being influenced by white patronage. By mandate, the school could not teach traditional Native American arts. Quah Ah simply made art with the materials provided.

At age 12, her mother died, and Quah Ah was sent to live with   relatives in Cochiti Pueblo where she would marry and learn new ways. She started over in many ways, except in her art, but painting defied their tradition. Only through her husband’s negotiations with the tribal council was she granted the ongoing right to paint. She paid others to perform her traditional female duties, like a modern working mother. When her husband died, she had to support her children until she married again. 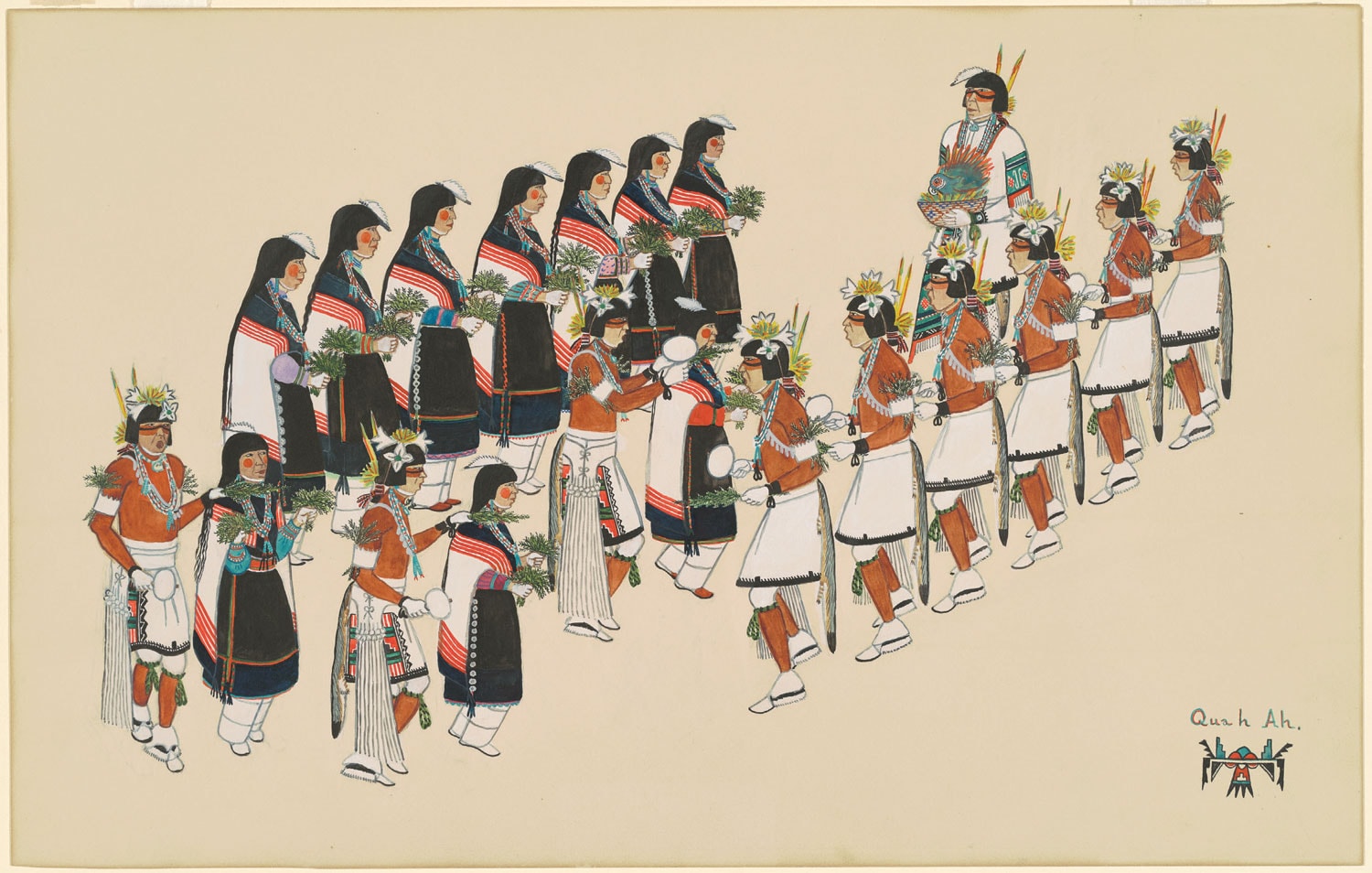 By 1921, Quah Ah met Edgar Lee Hewett, the director of the Museum of New Mexico in Santa Fe. Impressed by her work, he bought paintings, supplied materials, and provided introductions to other patrons. Along with support from the assistant director of the museum, Lansing Bloom, Hewett’s patronage gave her a stable income even as Quah Ah re-married and was widowed again and again. Within her Pueblo, this caused friction. She wrote to Hewett: “I think it is better for me to do the painting at Santa Fe because here the people come to see me every day when I am painting, and I don’t like the people to see me when I am painting … The farmer wants to know how much I get paid for my pictures. … He says I get paid too little. I told him I am not going to tell him how much I get paid.”

The arrival of the railroads brought both a challenge to American Indian culture and a cavalcade of tourists, who all wanted to buy a piece of Pueblo heritage. To the people of her Cochiti and San Ildefonso pueblos, selling one of her dance paintings felt like taking a piece of their soul.

Yet, Quah Ah’s influence grew. She taught painting at The Studio, part of the Santa Fe Indian School, and empowered future masters like Tse Tsan (Pablita Velarde) to overcome the challenges of being a Pueblo woman and artist.

“Tonita was really a help to me in my early years at the Indian School. She was staying at the girls’ dorm,” says Tse Tsan in Kathryn A. Flynn’s book Public Art and Architecture in New Mexico, 1933-1943. “That’s how we got acquainted. She talked Tewa, and she used to tease and laugh and joke in Indian, and that was fun. Then she would be sitting in her room in the evening, just painting for herself, and I’d watch her and talk to her.”

Looking at one of Quah Ah’s paintings brings you there — to the Pueblo. It fosters a spiritual connection, a bridge. In the 1920s, her paintings, like white coral beads, were traded and shown all over the East Coast. Her work helped change perceptions of Native Americans. The federal government’s dance ban was lifted in 1934. 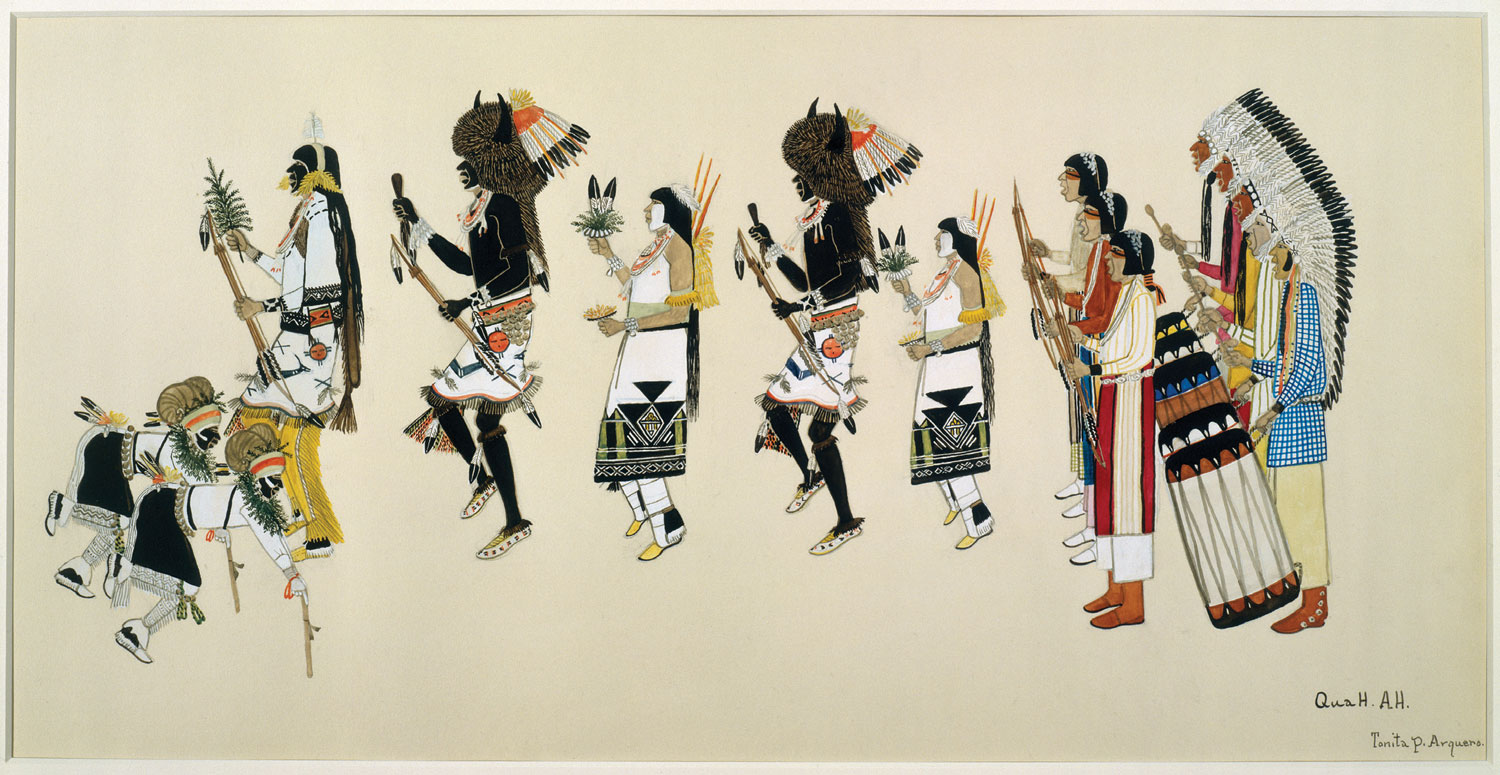 Today, Quah Ah is considered a contemporary master, and three current exhibitions display a variety of her work.

At the National Gallery of Art, Uncovering America, a teaching resource, uses her painting Hopi Corn Dance to help students examine the effects of immigration on culture. And ongoing through July 17, 2019, American Indian Artists: 20th Century Masters at the National Cowboy and Western Heritage Museum in Oklahoma City, Oklahoma, places her on a pedestal with Harrison Begay, the Kiowa Six, and Rance Hood.

“She pushed the boundaries as the first woman [in her Pueblo] to paint human forms,” says curator Eric Singleton, adding that he questioned the need to break off Native American painters from the mainstream. “If it were up to me, the title of the exhibit would be, ‘20th Century American Masters,’” he says.

As part of the permanent Constructing Identity exhibit at New York’s Montclair Art Museum, Quah Ah’s work is next to that of artists as diverse as Charles Willson Peale, Naomi Savage, and Dennis Oppenheim. “She is such an important Pueblo painter, skillful artist, and influential in the theme of dance,” says Gail Stavitsky, Montclair’s chief curator. Stavitsky hung an untitled Pueblo dance scene next to Jack Whitten’s Bessemer Boogie (1993). The Quah Ah work portrays a female dancer, kneeling on the ground, as the center of the Pueblo world and future.

Martinez, a San Ildefonso elder and tribal council member, shares how he felt when he looked upon a Quah Ah painting at the Smithsonian: “My perspective as a tribal member is that it’s an honor for someone within our community that taught herself to be a painter. Wow, I can’t believe what beautiful work this lady has done. For our people.”