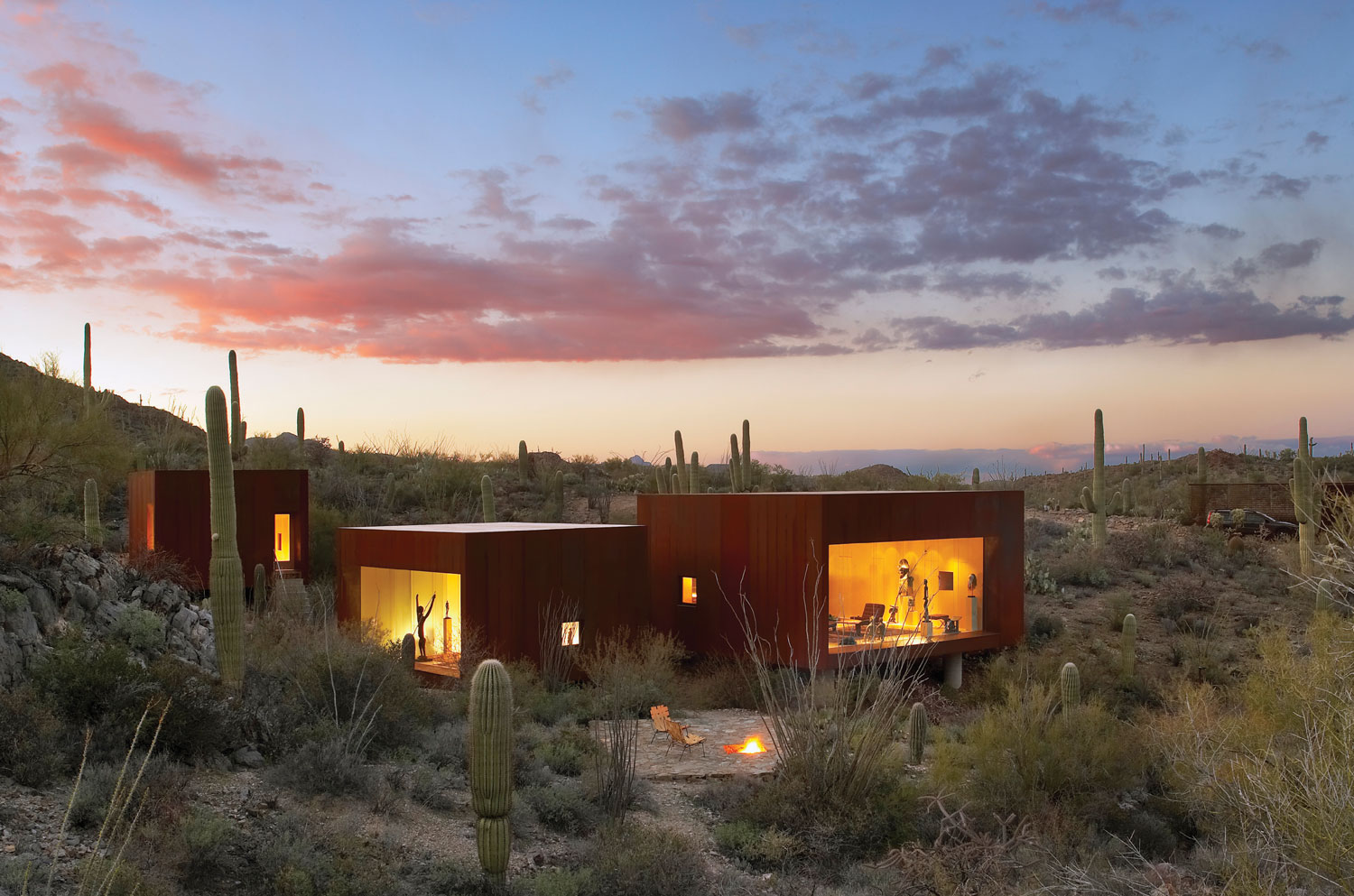 The Desert Nomad House, with views of Tucson, Arizona, in the distance, is immersed in its surroundings and set in a hollow rather than on a promontory. Designed in 2006, it was seen as a renaissance in desert building. Photo by Jeff Goldberg/Esto

“As I get older and the firm gets more experienced,” Rick Joy says, “we’re really drawn to that feeling of creating silence and making architecture where there’s nothing you can take away or add.”

It might seem odd to describe orthogonal, pared-down, minimalist design as intensely emotional, but in the case of Studio Rick Joy, it’s completely apt. The interplay of light and shadow throughout the clean lines of projects creates a stirring, mysterious, and meditative experience. 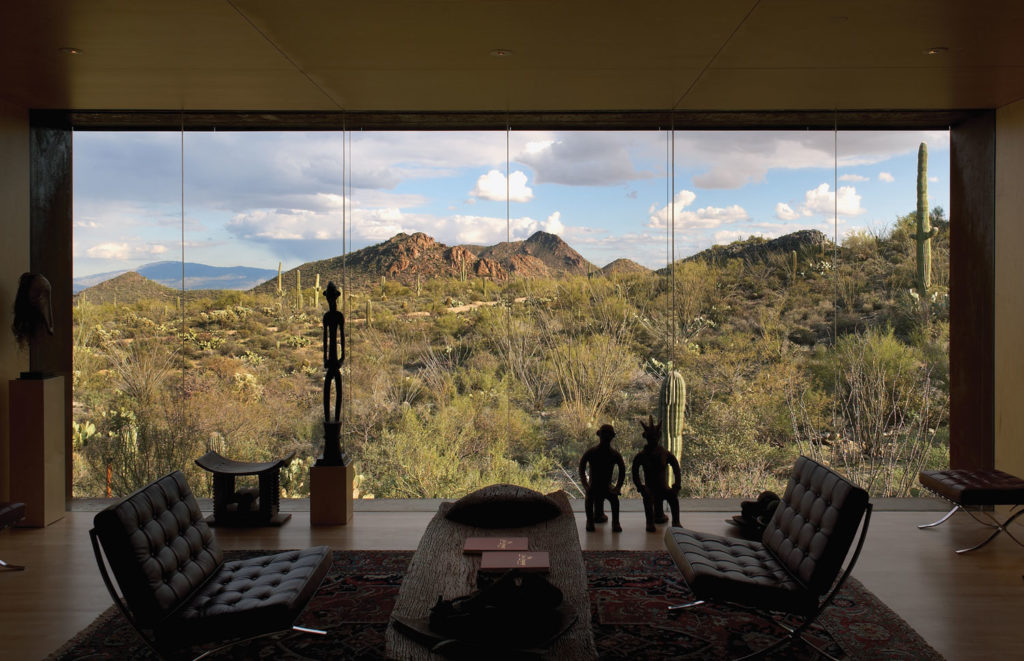 A former professional musician — a drummer who played everything from “Earth, Wind, and Fire” to symphony percussion — Joy continually uses the word “atmosphere.” He says that as a drummer, he created an atmosphere for each song, making it feel a certain way, and that he’s brought that sensibility to architecture. “I think there’s an atmosphere that comes out in our work,” he says, “that you can experience. I think it’s identifying with the spirit of the place.” 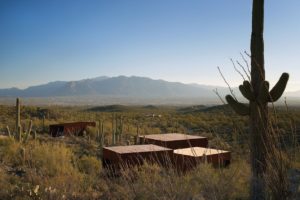 Using the living room cube as a staging area, construction was ultra-sensitive to the natural landscape of saguaros and native brush. Photo by Jeff Goldberg/Esto 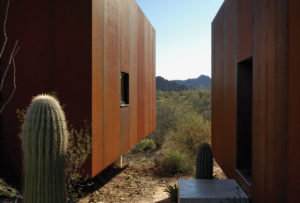 The structures are raised to allow wildlife passage. Each has its own floor-to-ceiling view, with smaller windows creating a constant play of light. Photo by Jeff Goldberg/Esto

For Joy, atmosphere is a concept that includes both the physical and the emotional. The physical is “wind and water and sunlight and contours,” he says. The senses immediately enter into play: the sound of gravel crunching, water falling, birds; the aroma of the surrounding natural growth; the texture of the materials; the views, and, always, the light. The emotional is the sum total.

And then, there’s just the sense of elation in the sheer beauty of his designs.

Joy rarely picks the seemingly obvious money-view spot atop a site. He’s all for sweeping views, but more inclined to choose a hollow or basin, creating a stage for the client’s life in which the site itself is the overwhelming first impression. 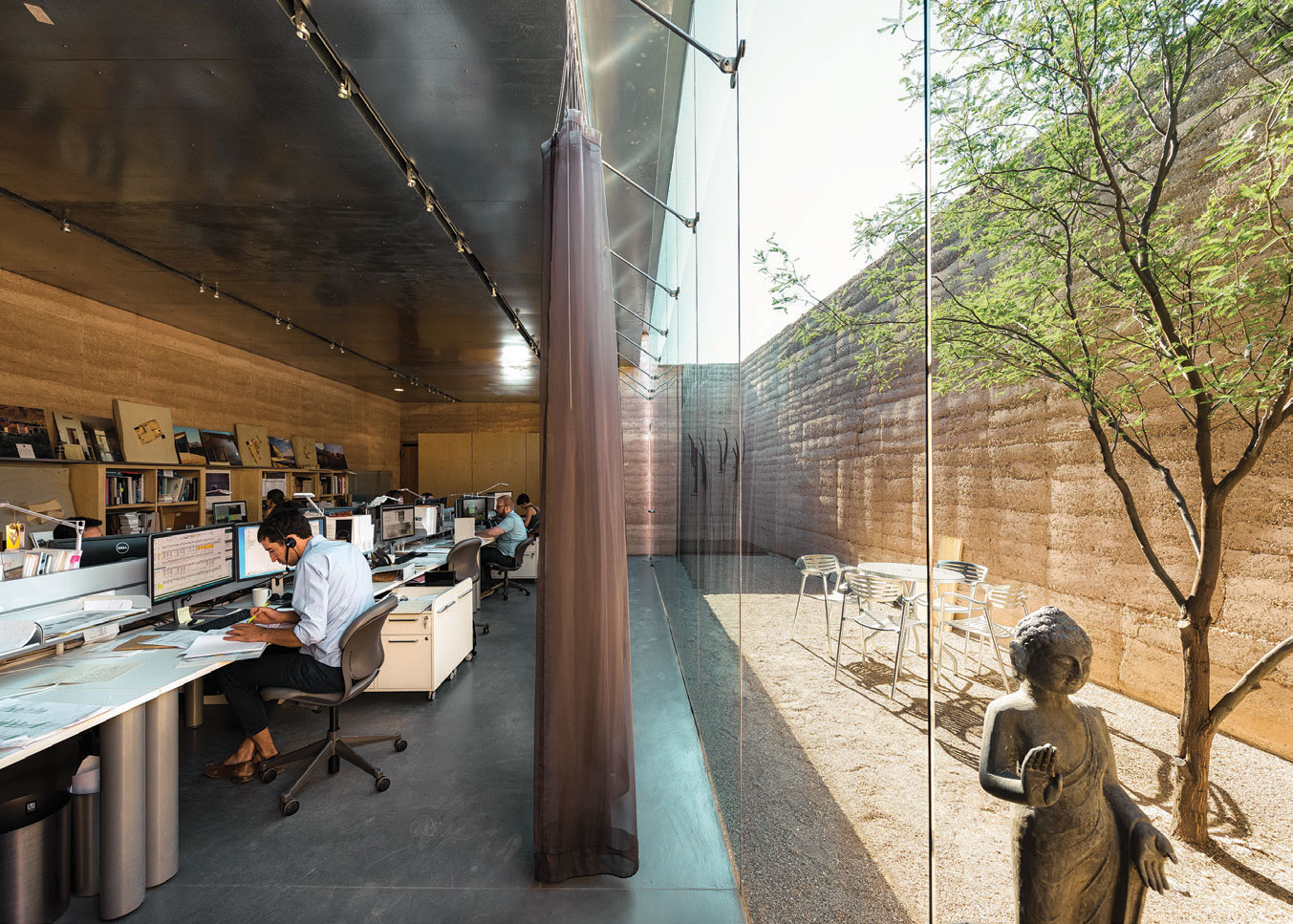 In Tucson, Arizona, Studio Rick Joy’s main workplace, one of seven buildings, is constructed of rammed earth with a glass wall that opens into a courtyard where a mesquite tree grows. Photo by Joe Fletcher

He first hit the map with his modern houses in the Arizona desert and the rammed-earth studio and living quarters he built for his firm in Tucson, Arizona’s historic Old Town. He received a lot of attention for his use of rammed earth, steel, wood, rocks, and concrete, and for the sensitivity of his designs to the natural beauty and fragility of their sites. His most famous house from that period, Desert Nomad, is three discrete steel-clad cubes amid saguaros as high as 30 feet. It leads the occupant outdoors to move from purpose to purpose: In one cube is the living area with kitchen and dining, in another the bedroom, in the third, the study. The cubes are slightly elevated to allow wildlife to pass undisturbed, and the foundations were hand dug to avoid disturbing the saguaros and brush. Each cube has a different view.

Joy not only designed but also built these early houses. He began as a one-man operation, then took on staff, one by one, as the firm became more successful. 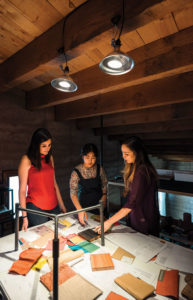 The second floor of one of the studio buildings has a peaked and beamed ceiling. Photo by Joe Fletcher

“We have 30-some people now, with 16 countries represented, and people of all ages,” he says. “We’ve changed the name of the firm to Studio Rick Joy in order to be more inclusive. I’m kind of like the conductor. It’s a cooperative firm in that we all work together with the same goals and core values, and there’s not much of a hierarchy except for the experience levels.”

It’s been a dozen or more years since Joy has produced a desert house, and in 25 years, the firm has built only four rammed-earth projects — but, he relates with a shudder, he was once told by a university dean in charge of commissioning a prestigious museum, “We strongly considered you, but we just couldn’t see a rammed-earth museum.”

Joy’s only reaction was, “Noooooo.” 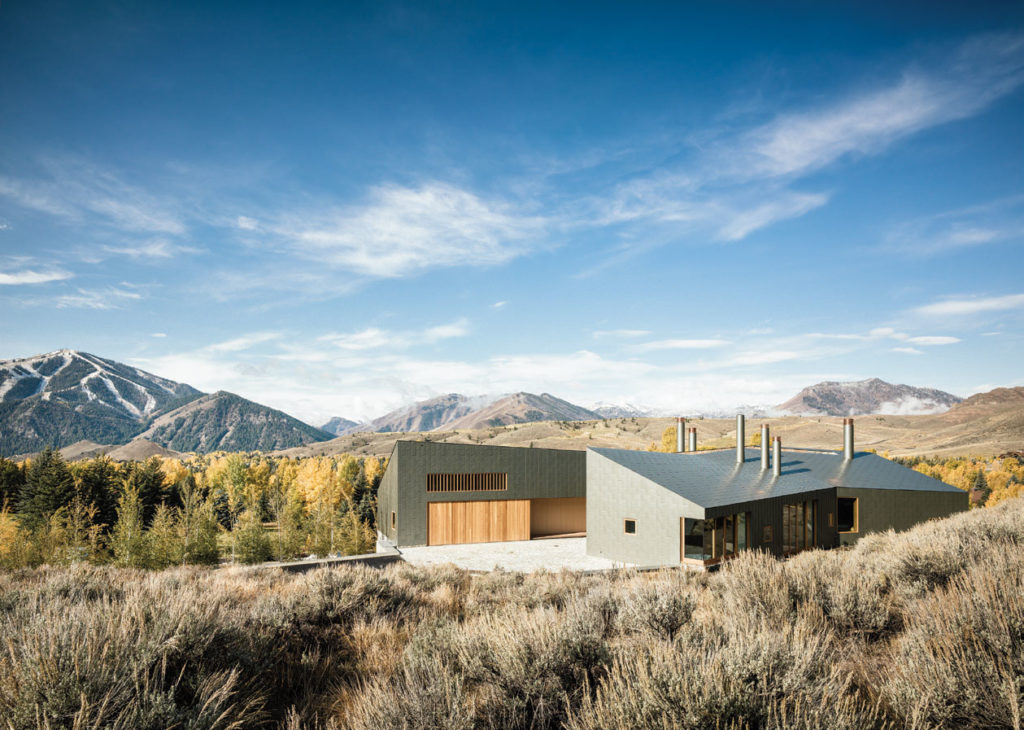 Joy, whose pet peeve is obvious garage doors, hides this one behind what appears to be wood paneling on the granite- clad exterior. Photo by Joe Fletcher

These days, his favorite clients are those who have no doubts that the firm can create something it’s never done before, like the Transit Hall and Market, a train station in Princeton, New Jersey.

“I work hard to avoid a signature style,” he explains. Definitely not the same style; but Joy does apply the same sensibility he used in the early desert houses and the much lauded Amangiri resort in Utah to settings as varied as Ibiza, the Turks and Caicos, New England, Mexico City (a five-story apartment house in the ritzy Polanco district which, he points out, made it through the earthquake), and the new One & Only Mandarina homes and resort, which includes 55 private villas on Mexico’s Riviera Nayarit. There’s the possibility of a project in India — but there’s also plans for a house in Tucson (which the firm will also build) and another in Park City, Utah. No way the firm is abandoning the American West. 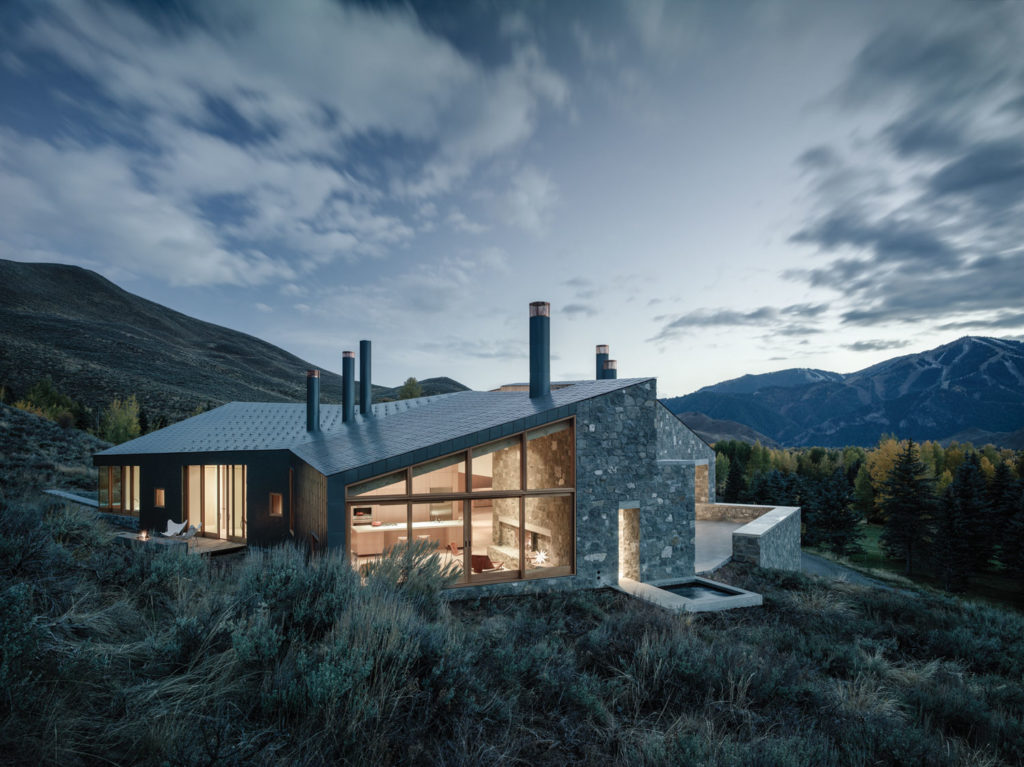 The shallow slant of the roofs allows a layer of snow to remain, adding to what he calls the “quiet presence” that makes this otherwise dramatic house virtually unnoticeable from the street. Photo by Joe Fletcher

Joy grew up in Maine and Massachusetts. After high school, he received a music scholarship to the University of Maine, then worked as a professional musician and part-time carpenter. While working, he went to the Portland School of Art (now, the Maine College of Art), where he studied color theory, photography, and sculpture. Somewhere in there, he helped build a house. Architecture had always been an itch. As a child, he’d spent hours sketching elaborate cities. At 30, he entered the architecture program at the University of Arizona in Tucson, a move he says was partly motivated by the strength of the program there, headed by Dean Ron Gourley, and a desire to get as far away as he could from New England and the temptation of more and more music gigs.

While he was still in art school, a friend was getting rid of a weaving loom. Joy thought, “A free loom? Okay, I’ll give it a shot. I just got hooked.” The wall pieces and woven sculptures he created got him into the
architecture program. 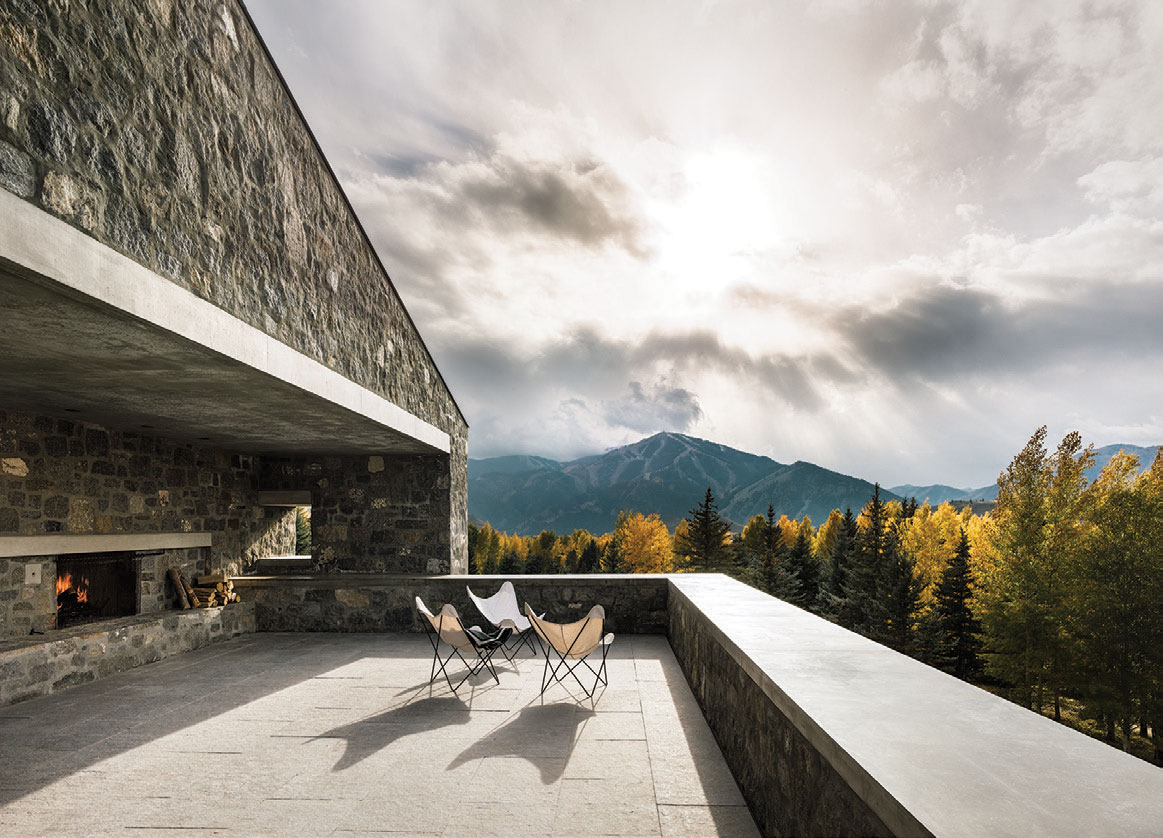 At the Sun Valley House, a cement lintel crowns the main terrace and the fireplace below, contrasting rugged stone with smooth concrete. Photo by Joe Fletcher

“I’m pretty free with what I’m doing,” he remarks — a bit of an understatement.

Asked for the names of architects who’ve influenced his work, Joy mentions Sigurd Lewerentz and Sverre Fehn, but in particular, Luis Barragán and Louis Kahn. 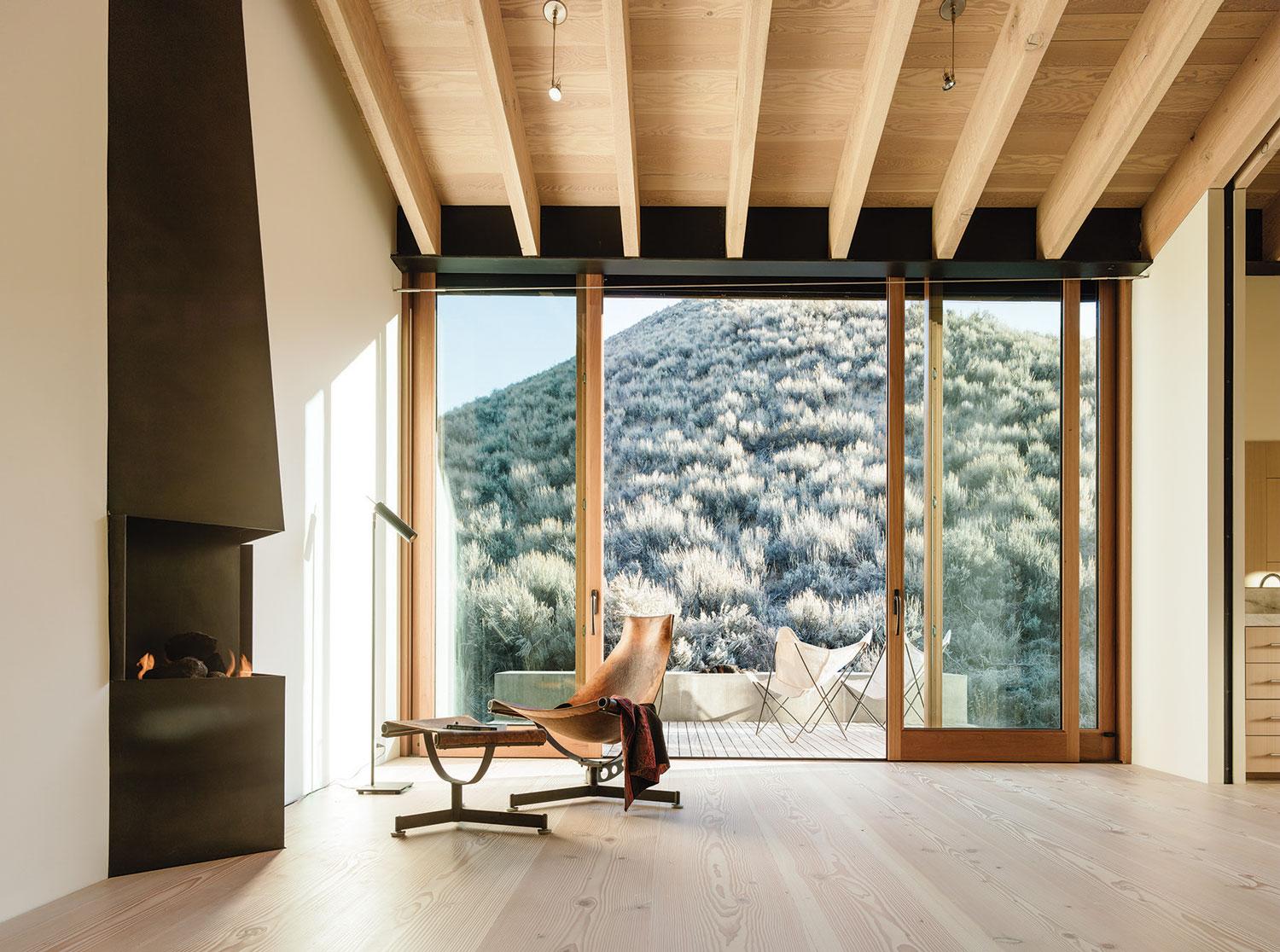 Both Barragán and Kahn created works elevated by the dramatic use of light. Both were working against the sterility and monotony of much of modern architecture by advocating a return to emotion in design. Joy believes in Kahn’s exhortation to architects to give more of themselves, including their own history, to their work. Like Barragán, Joy places volumes and creates apertures that focus natural light into constantly moving spotlights that add to the mystery and serenity of
the houses. 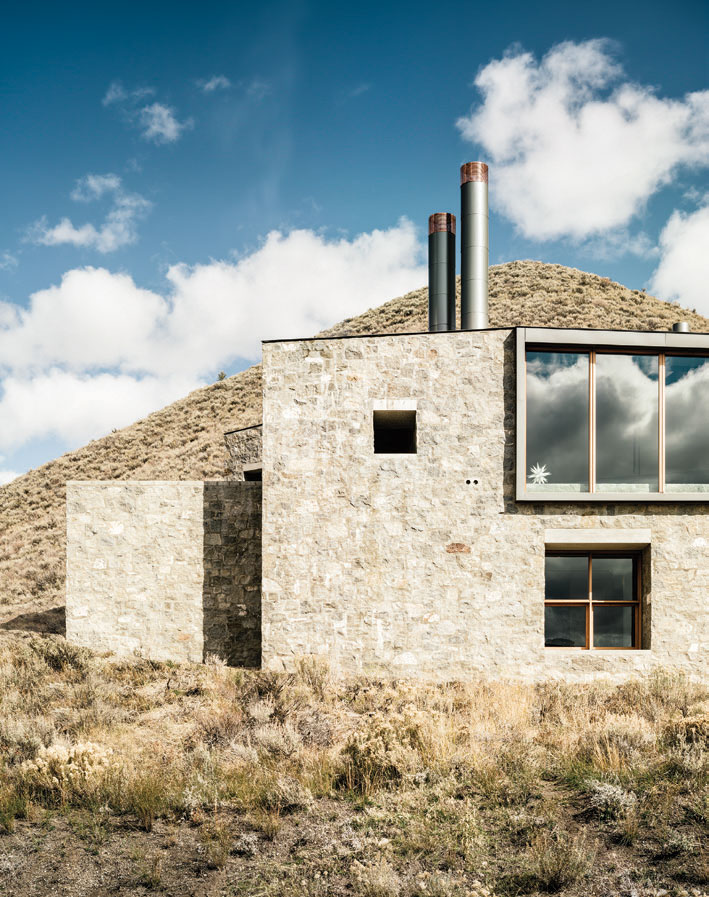 The Sun Valley House in Idaho consists of two wings, maintaining serenity through separation of the living and sleeping spaces. Guest quarters are on a lower level. Photo by Joe Fletcher

His favorite house is still his first, the Catalina House.

“Other people might disagree,” he says, “but for me, it remains the rabbit in my chase. It’s a very emotional atmosphere, with big, thick, heavy walls, and just the way it sits on its gorgeous site. It’s a whole range of things. I could probably say the same thing about the Sun Valley House, it sits on its site the same way, relating to the contours of the
mountain nearby.” 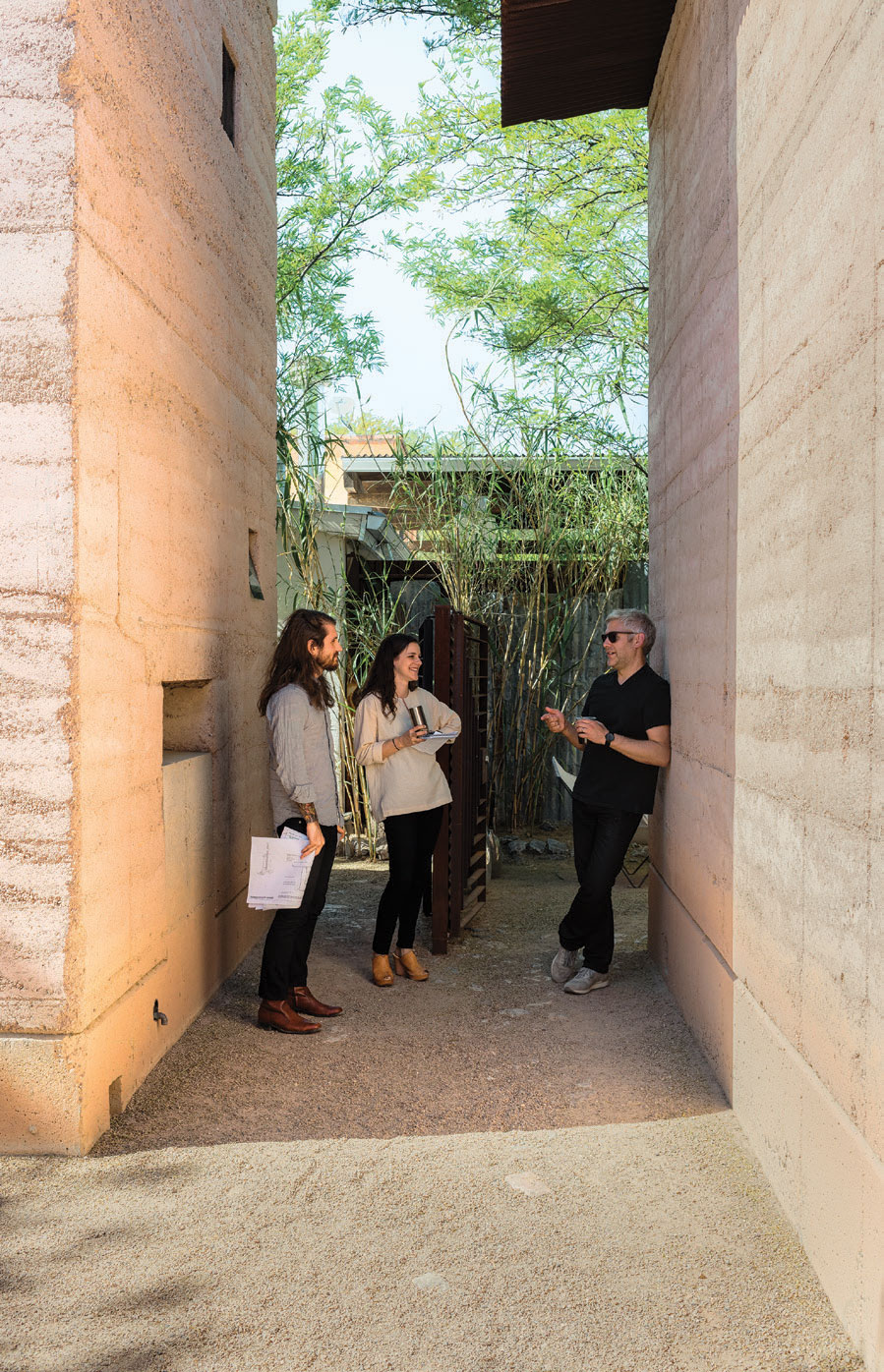 Since 1993, Rick Joy has led a cooperative practice engaged in architecture, planning, and interiors around the globe. Photo by Joe Fletcher

Rarely mentioned is the aspect of sustainability.

“Well, I have a strong attitude about that. I just believe it’s what all architects should do and not waste a lot of time talking about,” Joy says. “I think all that talk about LEED is not for us. We just do it.” 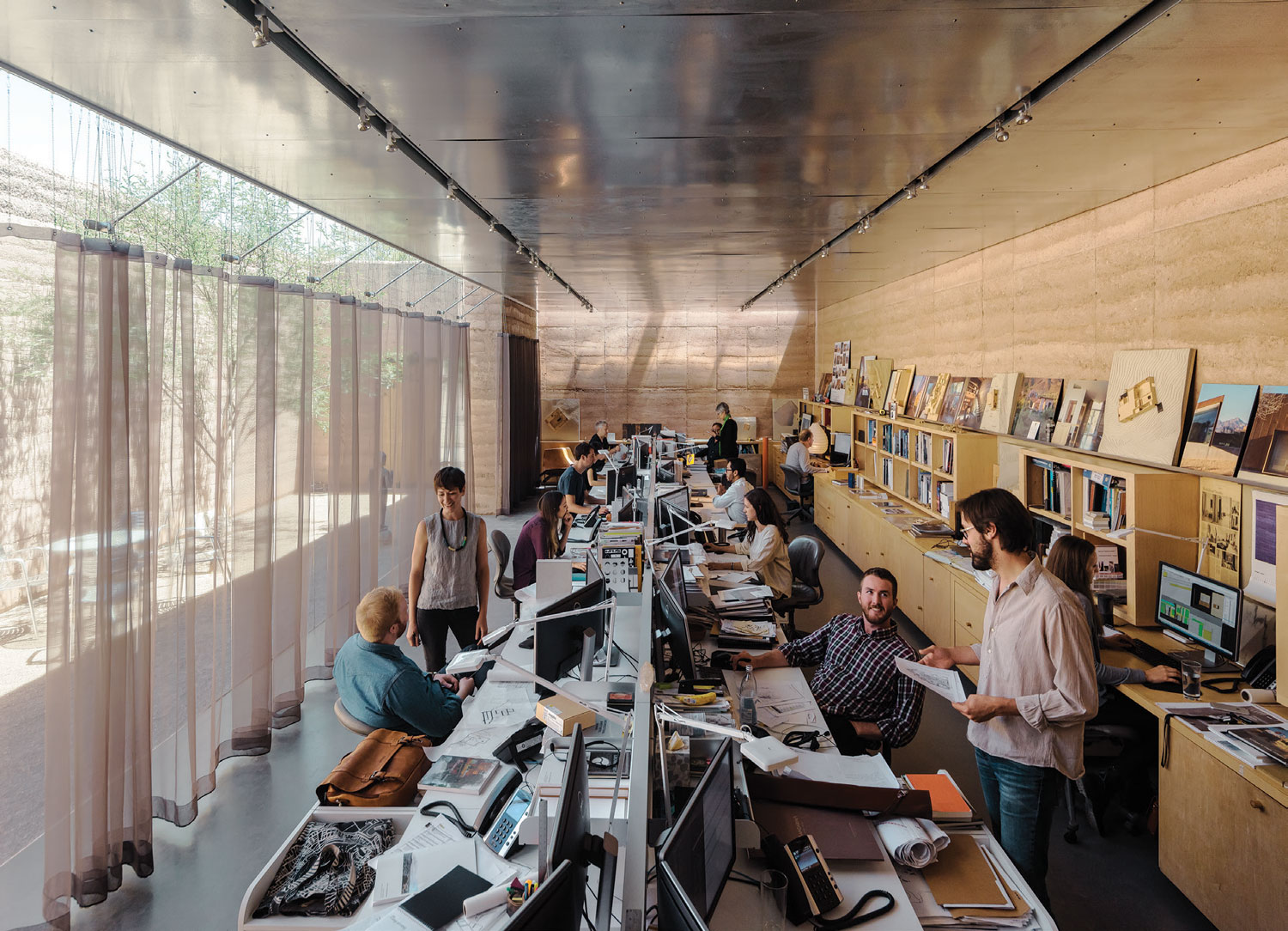 In the future, he sees the firm doing more public projects, but not abandoning residences, and in fact adding more services, from furniture to tableware. His wife, Claudia Kappl, runs CLL Concept Lighting Lab, working with numerous architectural firms in addition to Studio Rick Joy.

But the firm won’t grow much. “We have people in seven buildings, and I don’t want to buy another one,” Joy says. “We have a decent lifestyle, and we get a lot of work done with fewer people. I’m not really interested in taking over the world. I’m not aiming for the intergalactic design award.”