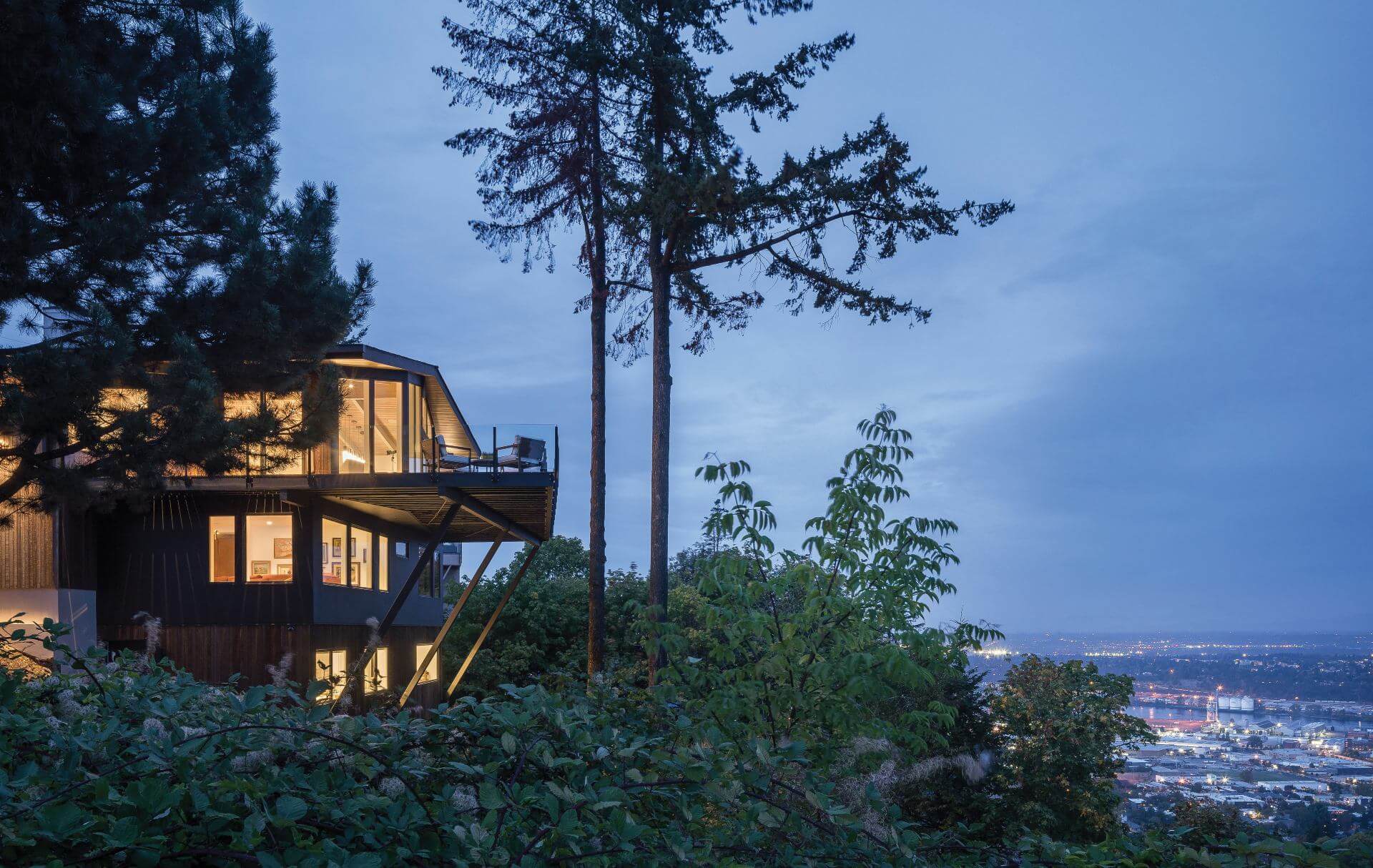 When an empty-nester couple — who had raised their children in the suburbs and were looking to move back into the city — saw one of Birkemeier’s houses online, they knew they had to visit it. Initially, it was all about the view. The house had some dated elements and some quirky features, but the view from the deck encompassed the city skyline, the Columbia and Willamette rivers, and four iconic Cascade peaks: Mount Hood, Mount Adams, Mount Saint Helens, and Mount Rainier. 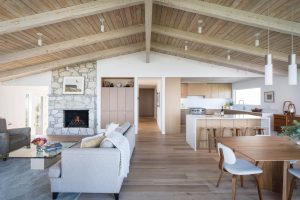 Prolific Mid-century Modern architect Kenneth Birkmeier built approximately 700 houses and apartments in the Portland, Oregon, area. This recently renovated home in the hills — a classic example of his modern post-and-beam ranch-house style — was his own home until his death at age 90.

Although the house needed updating for modern living and could take better advantage of the light and setting, it had something no other building did: It had been Birkemeier’s personal residence from the time he built it in 1965 until his death in 1996 at age 90.

The house was built on a steep lot over two levels, with the garage on the street façade and an unobtrusive side entrance. The interior spaces were all about embracing the views east over the Willamette Valley. The upper level was mostly one big vaulted-ceiling space for living and entertaining, with a deck that took advantage of the scenery. 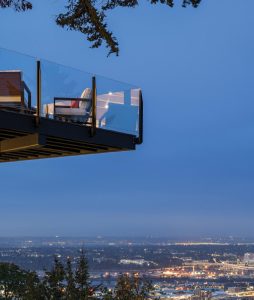 First attracted to the views, the new owners grew to appreciate the architecture’s bold interaction with the landscape and its strong sense of place.

“The structure was largely untouched,” explains architect Jake Weber of Giulietti Schouten Weber Architects (GSW), who completed the renovation with contractor Brian Bohrer of Cornerstone Construction Services. “After Birkemeier passed away, it was kept in the family. When it came up for sale, our clients bought it. To us, it seemed like he’d been trying a bunch of different things because the style seemed like it wasn’t holistic.” 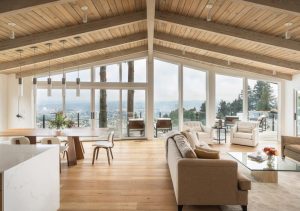 Jake Weber of GSW Architecture led the renovation. His main intervention in the open-plan living room was to install a floor-to-ceiling glass opening to a deck that cantilevers out into the sky. He designed the knife-edge dining table with splayed panel supports to minimize interruptions of the view.

Weber explained that there were ornate details that didn’t read Mid-century, but there were other aspects, like existing beams, that did. In the beginning, the design team determined what to keep and what to clean up, and how to rethink the spaces for modern living specifically for this family. “The house was pretty outdated, but it had good bones we wanted to keep, mainly the great room space with the revealed structure and wood ceilings, and also the living room fireplace with the stone,” Weber says. “Then it was just a matter of reorganizing the spaces a bit.” 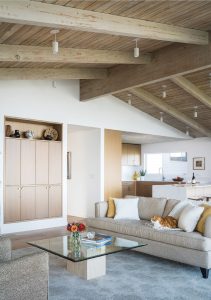 First, Weber streamlined and unified the exterior with a simplified roofline and vertical cedar siding treated with a non-toxic stain. In places, the cedar is offset with smooth cementitious panels painted dark for contrast. He repositioned the front door to get rid of an oddly shaped entry and to recapture some interior space, and he designed a larger deck that cantilevers out from the hillside. 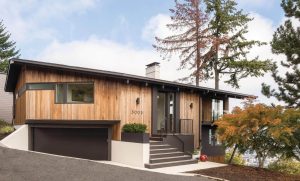 While the structure maintained its modest physical street presence, Weber transformed and contemporized its aesthetic. He simplified the roofline by removing a gabled dormer, re-arranged the front door on the side to make better use of interior space, and applied vertical cedar siding offset with smooth cementitious panels painted dark for contrast.

Inside, Weber’s design stayed fairly true to the original floor plan but envisioned the main level as more open and the kitchen more spacious. He moved the tight stairwell from its spot next to the kitchen so that it became both an aesthetic and organizational feature and relocated the laundry room to the lower level. Although there were two bedrooms and baths on the main level, the spaces were cramped. They were reconfigured to create a more generous primary suite with a bathroom and walk-in closet, plus an office and a powder room. Downstairs there are two bedrooms, a laundry room, and a media room. 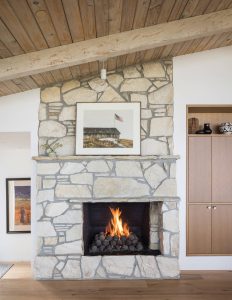 Hallmarks of the architecture and the era were preserved and sensitively updated. The existing fireplace stone cladding was reused, as was the living-room roof with its revealed structure and tongue-and-groove woodwork.

In addition, since the home was built before seismic requirements and sat on a steeply sloped lot, extensive work was done to ground the structure to the existing grade and bring it up to code.

The result was a tight and highly efficient home renovation. “We went from raising kids and pets to no longer needing a four-bedroom house,” says the wife. “The desire was to not build larger, so every inch was accounted for. For instance, there was a hallway with two long folding-door closets and built-in dressers on the backside of a huge laundry room; there was so much wasted space. To make the rooms bigger and to create a bigger office without changing the foundation or square footage, Jake was able to pick up space that was really not well used.” 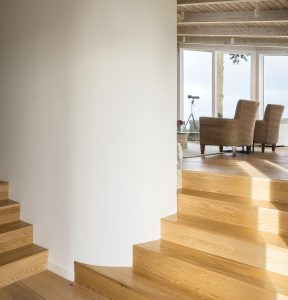 Minimal detailing and thoughtful attention to light and flow make the compact home seem bigger than it is.

For the interior design, says Shelby Hill of All Surfaces, “We really wanted to keep it clean and bright and classic. We didn’t want to select anything that would deter from the architecture and the incredible views. The wide-plank, wire-brushed oak floor, for instance, is very classic and neutral for the space. We did pick a couple of areas in the house to have ‘wow’ moments. The powder bath has encaustic hand-painted cement tile — green with white lines in a starburst pattern — for an unexpected fun detail. We chose a natural stone mosaic in the guest bathroom downstairs and used it for an entire wall of the shower. The kitchen countertops are a PentalQuartz material called Misterio. We carried that up onto the backsplash for a really clean contemporary look. The lower-level fireplace was done in a Slimbrick application product. We chose to keep it clean and timeless so it wouldn’t compete with the original fireplace upstairs.” 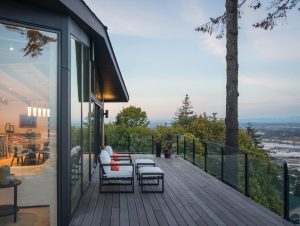 The view from the deck takes in the city skyline, the Columbia and Willamette rivers, and Mount Hood, Mount Adams, Mount Saint Helens, and Mount Rainier. Frameless glass guardrails mounted to the deck fascia were combined with Meranti decking.

The move with the most dramatic impact was the installation of floor-to-ceiling glass on the view side of the house, says the husband. “When they found the right window that could be 12 feet tall and rate as safe with wind and other elements, it really made the look of that side of the house, which is the focus.” 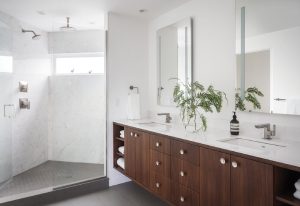 The primary bath features a floating walnut vanity, Schoolhouse Electric knobs, and quartz finishes. Regarding details like the triangular shower, says the wife, “A lot of the space was not utilized well. Jake was able to capture that space and put it to better use.”

“It was transformative,” agrees his wife. “You walk into the living room any time in the day, and it stops you in your tracks; you feel like you’re in a glass skybox. The other thing is, we now have unfettered flow from two sliding doors, plus another on the south side. When we entertain, we have all those doors open for a seamless indoor-outdoor experience.” 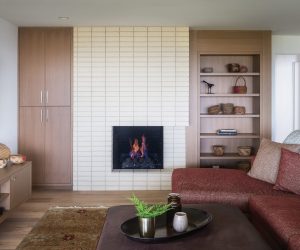 Interior designer Shelby Hill of All Surfaces was tasked with enhancing the light and bright aesthetic without detracting from the architecture and views. Wide-plank wire-brushed oak floors run throughout the house. Materials, like the white oak cabinets and Slimbrick veneer from Mutual Materials in the downstairs media room, maintain the home’s clean lines.

That move proved providential as the house was completed shortly before the pandemic changed the way people live and work. Suddenly these empty-nesters had their kids home for long periods of time; they found themselves working from home in a much smaller house than the one they’d moved out of, yet there was room for everyone. 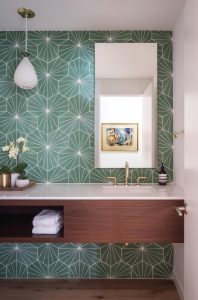 Small spaces pop, such as the powder bath with its hand-painted starburst cement tile and brass fixtures. The pineapple pendant was salvaged from the original home.

And now that their children have gone back to living their lives out of the house, the couple finds themselves at the start of each day sitting in white chairs and sipping coffee while gazing at the view — which must have been exactly what the original architect envisioned when he built the house for his own family.