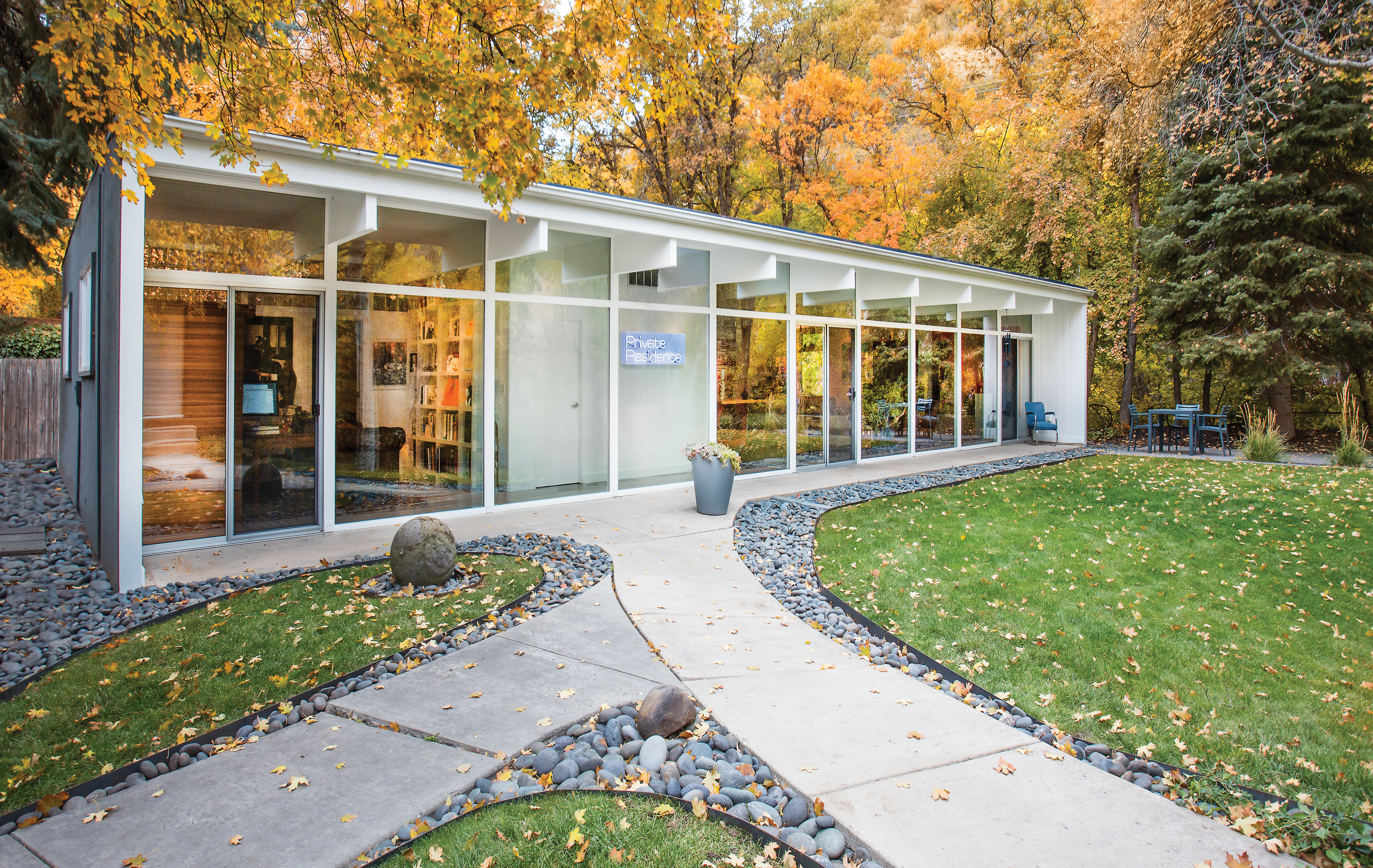 The 1,700-square-foot Mid-century Modern home was built in 1959 by architect John Sugden. Artist John Bell updated the home but left it true to the original design. The neon sign is Interloper(s) by Bell.

IF EVER THERE WERE AN EXAMPLE OF PLACE-BASED INSPIRATION — a setting that in and of itself ignites a creative spark — then Salt Lake City, Utah-based artists John Bell and Janell James have found it. The place happens to be their home that’s located on just over one acre in a canyon-like area 10 minutes from downtown Salt Lake. And it’s not just the lush yard and the mountains that surround them, but also the architecture, the story behind it, the renovation, and the life that has been lived there ever since. All of that packaged together has impacted both artists’ work and is partially responsible for the paths that both have taken to develop their individual approaches and unique styles.

In 1996, when Bell was living in another house on the same street, he fell in love with the home across the road. A 1,700-square-foot Mid-century Modern, glass-centric structure, it was built in 1959 by John Sugden, an architect who studied under Ludwig Mies van der Rohe and assisted him in building the famous Farnsworth House in Indiana. “It was originally built for Sugden’s lifelong friend Dev [Devereaux] Jennings, with whom he’d served in the 10th Mountain Division,” Bell says. “Dev was kind of a hip Jack-of-all-trades. He was a war hero; a downhill skier in the 1948 Olympics; he owned and operated a fashionable men’s clothing store in downtown Salt Lake; and, from what I understand, he was an accomplished jazz musician. It’s the only wood-framed house John built.” 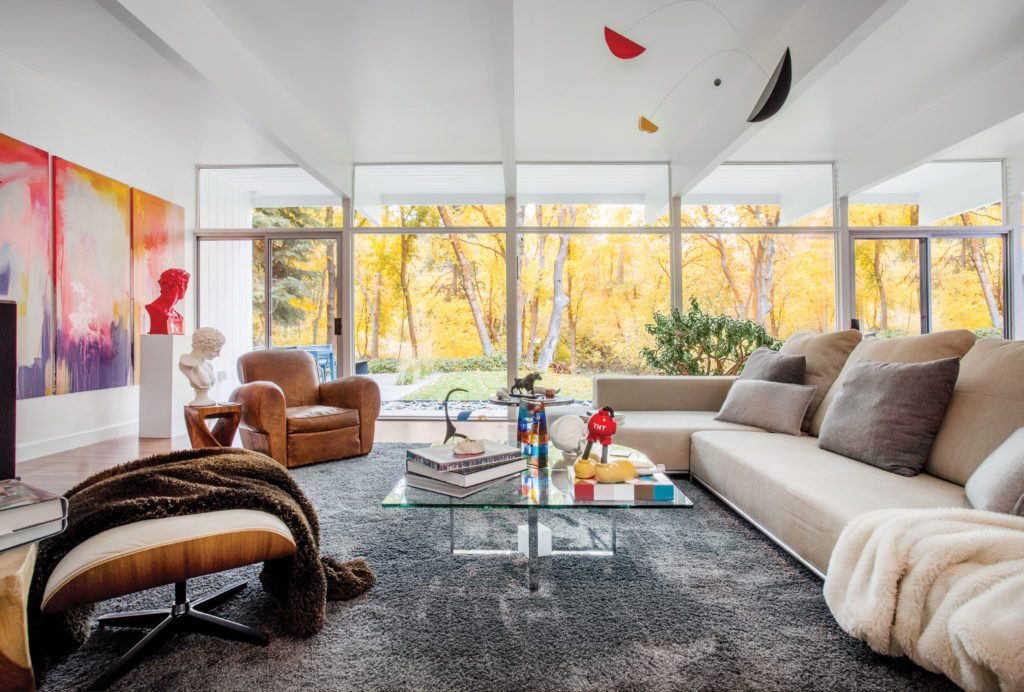 The living room looks out to the tree-lined property and features a limited edition Eames lounge chair and ottoman in cherry wood and cream leather, an original 1940 club chair from Paris, a custom coffee table designed by Bell, a George Sofa by B&B Italia, and a custom deep pile shag rug. Cellophane Angel, a 2018 triptych by Bell, hangs front and center. The red bust sculpture is Playing the Odds, a 2005 piece by Bell.

When the house went up for sale that year, Bell jumped on the opportunity to look at it. “It was still fairly run-down, but the bones were there, and it was elegant even in that state,” he says. “The light was amazing, and the way the house sat on the property; all combined, it just spoke to me.”
On a budget and trying to make it as an artist, Bell couldn’t afford the property at the time. “But I could never get it out of my system. I thought about the house and space often,” he says. Over the years that followed, Bell continued to check up on the house and, on occasion, he would leave a letter in the mailbox expressing his interest. (He later discovered the letters were getting tossed out by a renter who was also interested in purchasing the home.) 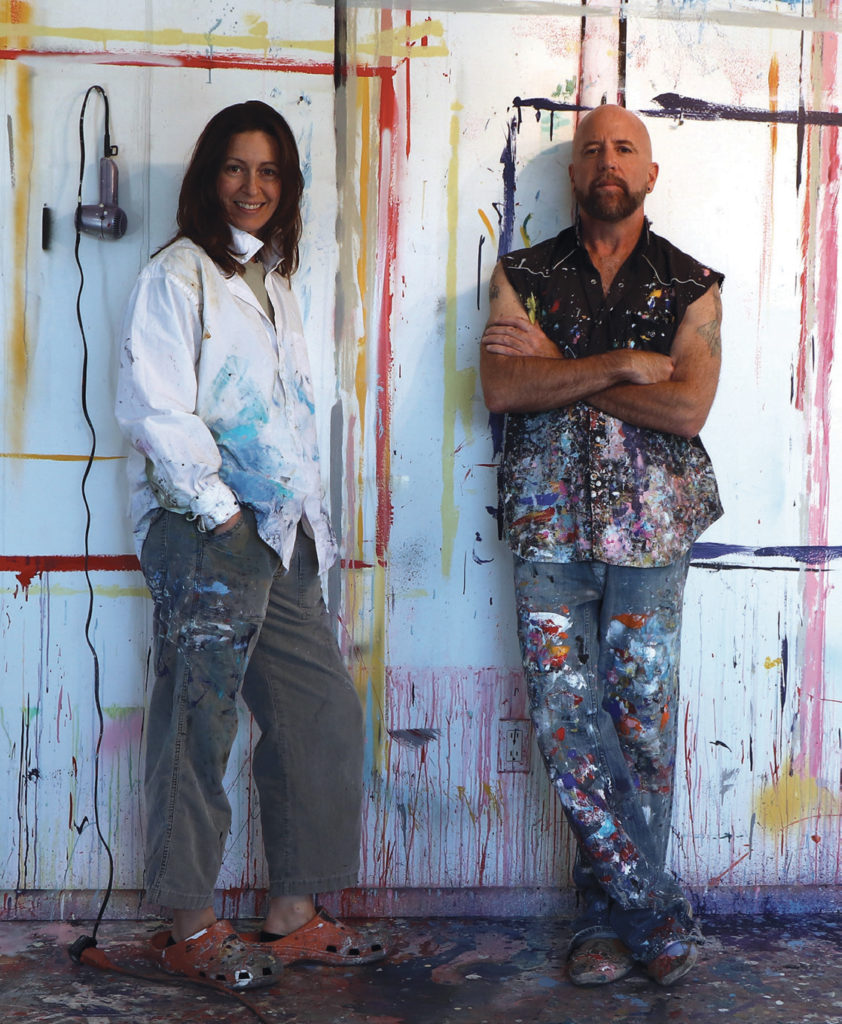 Artists John Bell and Janell James in their studio. Photo by Steve Stanton

In 2003, Bell was looking at real estate and mentioned the Sugden home to his agent. “She called two hours later and said, ‘You know your dream house? It’s going on the market on Friday.’” He bought it before it even hit the market.

Within two weeks of living there, Bell completely gutted the house. He served as the general contractor and did as much work as he could on his own. “When I didn’t know how to do something, I would hire someone else and tell them not to bring an assistant because that would be me,” he recalls. “I brought the house back as close to John’s original vision as I could. I built the large rolling island in front of the galley kitchen, queuing the design from the lines of the post and beam elements in the house. I really wanted to keep the integrity of the original architecture intact.” 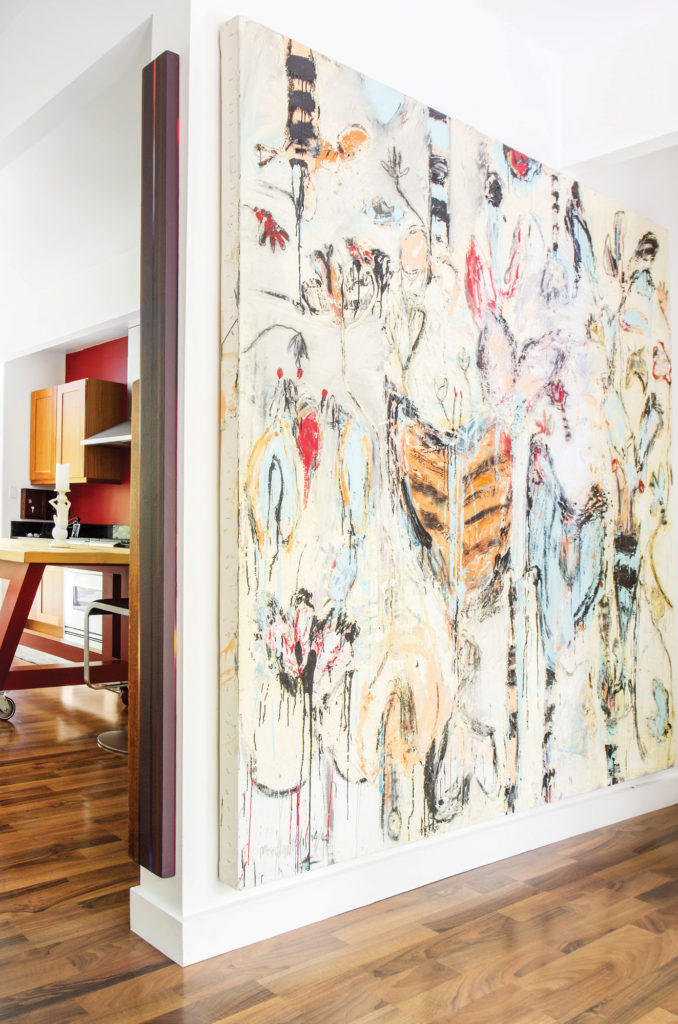 An interior wall features an end cap painting by Darryl Erdmann and a large painting by Layne Meacham.

As an artist, Bell studied with private teachers from an early age and attended the Art Institute of Pittsburgh. His early work was impressionistic, based on the techniques of the Old Masters, but as he started dabbling in the abstract in the ’90s, he realized that in order to stay inspired, he needed to come up with his own style.

Bell credits the home’s remodel as a guiding force during this time of artistic discovery, eventually settling on what he calls “Post-Modern mash-up,” in which he employs elements from multiple movements throughout the history of modern and contemporary art and culture and also many mediums, such as painting, sculpture, photography, and even writing. “This was during the same time that I was remodeling the house, and I was studying the philosophies about space in Mid-century architecture, how its non-tangibility can be created and manipulated,” he says. “I started incorporating these ideas into my work, thinking more like a builder and eventually creating three-dimensional canvases. It struck me that, if I can incorporate that into my work, what else can I put in there? I could take elements that resonate with me, which led to my main focus: cultural values.” 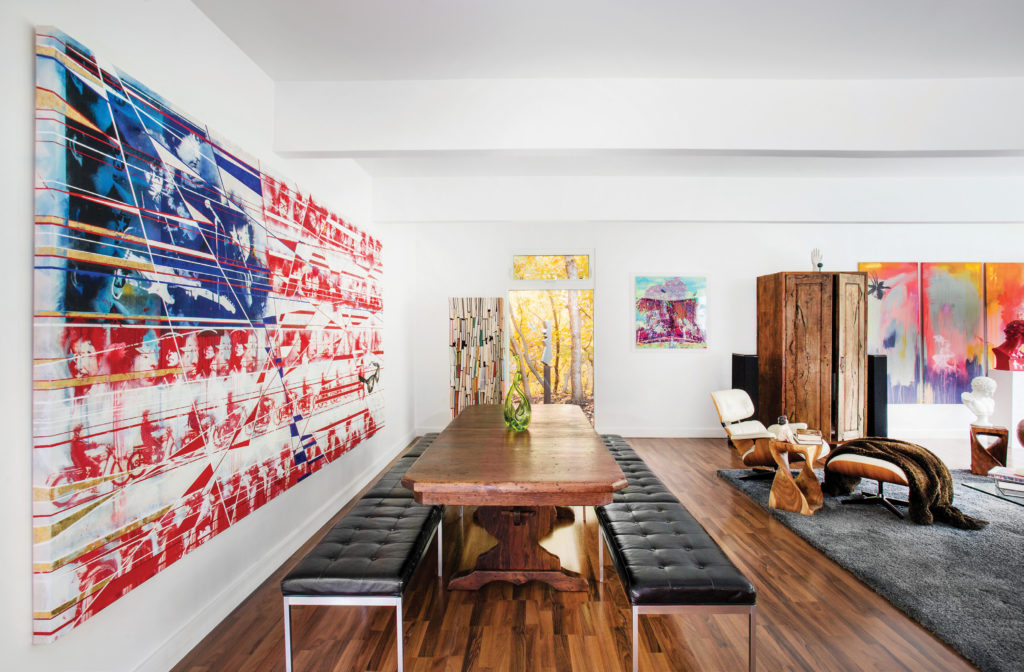 The dining area features, from left to right, a 2012 painting by Bell titled In the Museums Infinity is Going up on Trial; a 2019 painting by Janell James titled Kingpin; and a 2018 triptych by Bell titled Cellophane Angel. The 1940s wood table was restored by Bell and is accompanied by original Knoll Benches by Florence Knoll. At the rear is an Eames lounge chair and ottoman, and a custom-made armoire from 100-year-old Mexican doors by Marko Crawford Barker.

Like Bell, James’ work is rooted in the style of the Old Masters, and she studied at ateliers in San Francisco and Paris before diverging into the world of contemporary art. Her current focus involves painting with acrylics on multiple sheets of Plexiglas to create three-dimensional works in bold colors with brushstrokes that look pixelated. She says it’s a style that bridges the gap between contemporary and traditional, and trees, like those that surround the couple’s home, are what she depicts most often. “A tree is still something very tangible, and we all have some sort of connection with them,” James says. “They give us light and shade and homes, but also, the material itself, and the application of the work, is full of mark-making and abstraction. The tree, when completed, seems traditional, but when you walk up to it and look more closely, it’s abstract.” 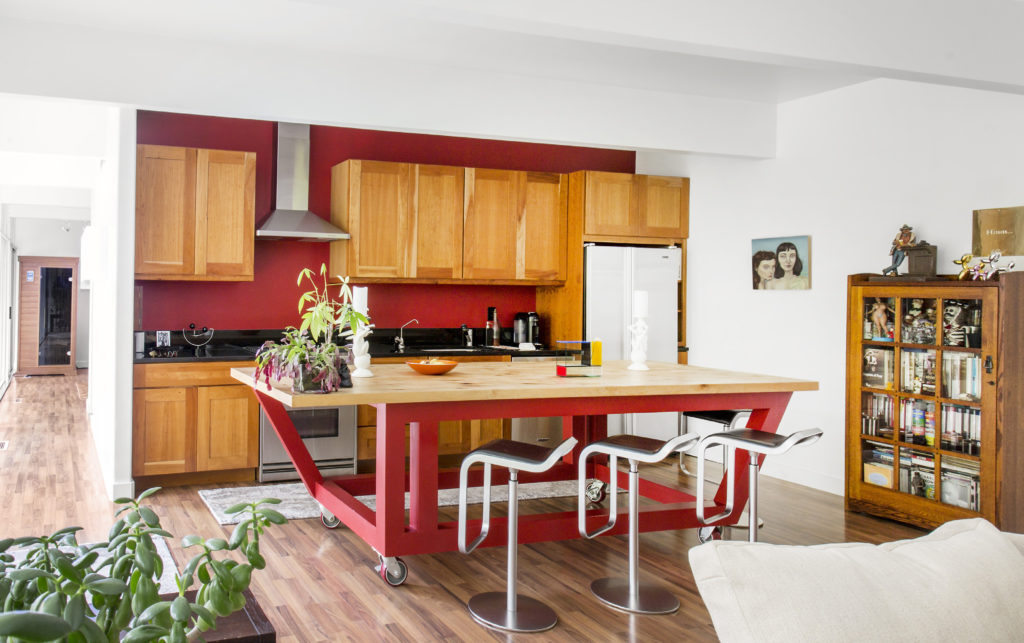 The kitchen features a custom rolling island that Bell designed and built in 2003. The display cabinet (right) is by Stickley, the stools are by Lapalma of Italy, and the painting, Always Looking, is a 2019 piece by Skyler Simpson.

“In observing Janell’s work,” Bell adds, “there are very strong parallels with the home and the way it reacts to its natural surroundings. Sitting in a very modern space confronted with a glass wall framing nature, there is a harmony between the two that you don’t see all that often.”

Bell and James ran in similar circles in the contemporary art world in Salt Lake City, but they officially met in 2004 when she was curating a show in Park City that included his work. It wasn’t until 2015, however, that they fell for each other on a vacation with friends, and they’ve been together ever since. 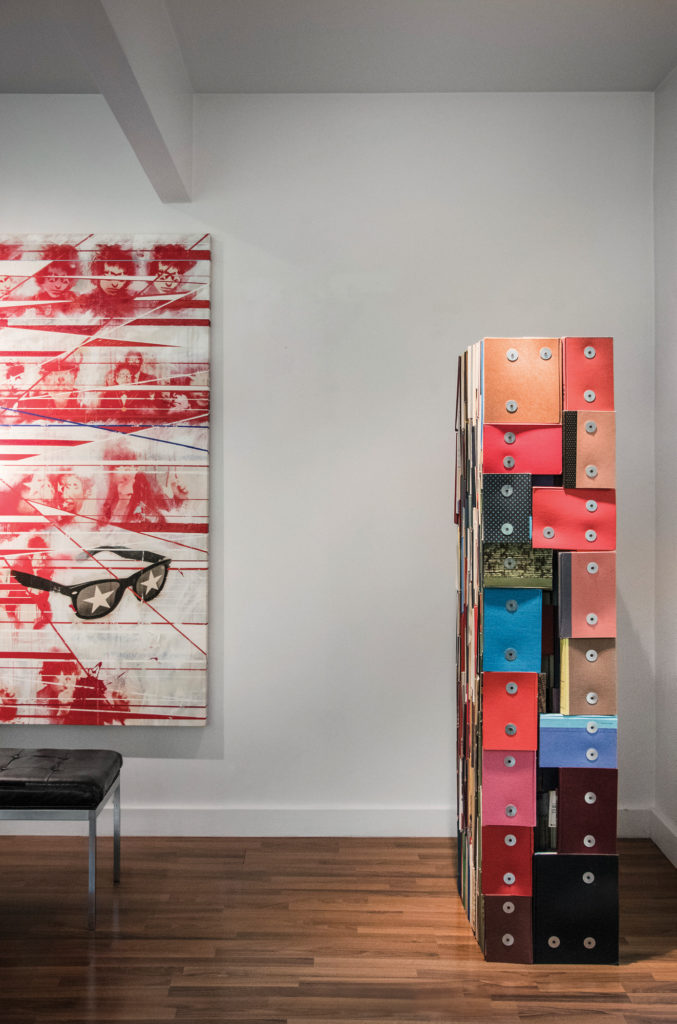 This sculpture by Adam Bateman was created for Bell when he received the Visionary Award from the Central Utah Art Center in 2016. It’s a portrait of Bell, created from his measurements and built largely with books from his library.

The couple works out of a multi-use warehouse space near downtown Salt Lake that houses a gallery as well as a large painting space, printmaking area, and art storage. The gallery, called ONE Modern Art, has pop-up style art shows and is open by appointment at other times.

From the time he first fell in love with the home and admired it from afar to now, Bell’s career as an artist has taken off and propelled him into areas he’d never expected. And Janell’s artistic path has also flourished in ways she never imagined. “We are two very different artists stylistically,” Bell says, “but we have found a universal dialogue that we share and grow from.” 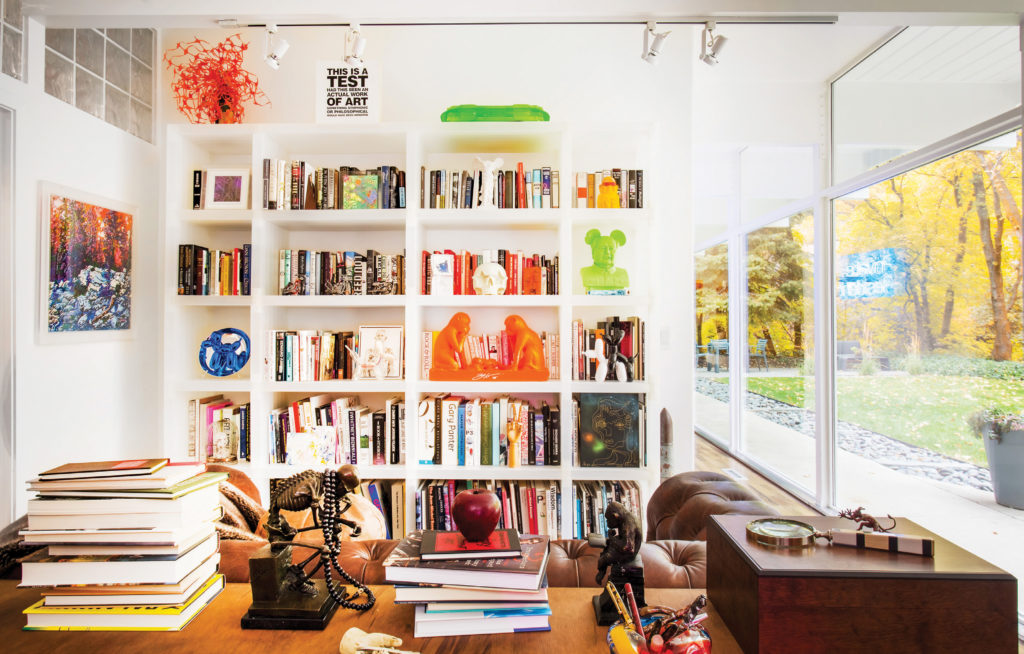 A collection of books and art, including works by the homeowners, Ron English, Frank Kozik, Jeff Koons, and others, add color and character to the room.

And as far as the home goes, the couple views it as a sanctuary and a place to conceive ideas to incorporate into their art. “It’s an idyllic setting that offers an instantaneous reprieve from the bang and clatter of life,” Bell says. “It truly is a temple and the perfect setting for contemplative endeavors.”