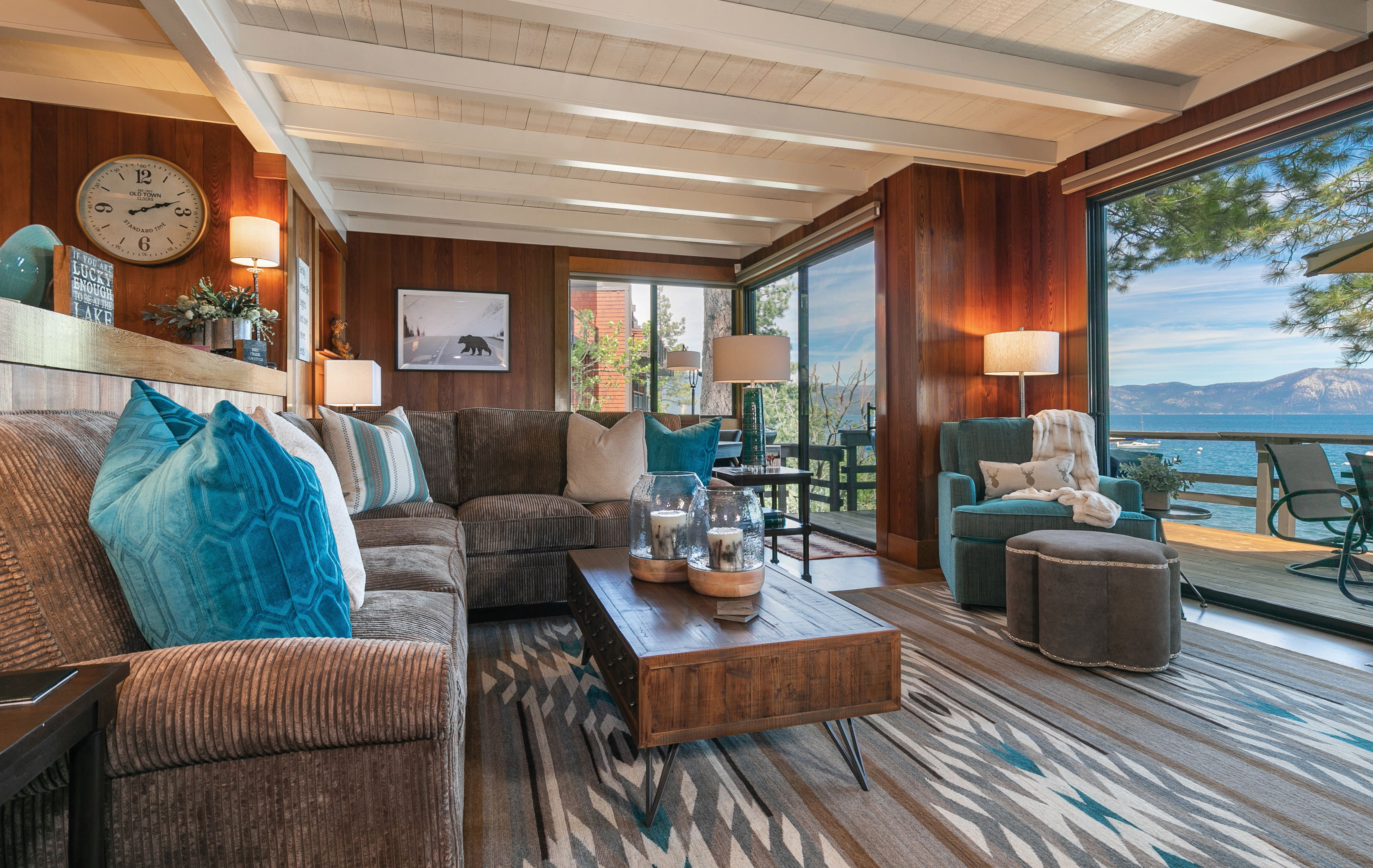 This hand-knotted Tibetan-weave carpet is made from 100 percent New Zealand wool. Named Alta Vista, it’s part of Southwest Loom’s Santa Fe Collection. The turquoise rug’s accents pull the blue of Lake Tahoe into the color scheme, and the room’s design builds from there with furniture and pillows.

Douglas Lay knows knots. He can look at the wefts in an old Persian rug and tell you which Central Asian country it comes from, which region of that country, and even the tribe or village. “If every second row of knots is twisted 45 degrees to the left,” says Lay, by way of an example, “it was made by Kurdish weavers in Kurdistan. If it’s from Iran and is single weft and cotton, it’s either a Hamadan or a Bakhtiari, a tribal district.”

But if you ask Lay, who founded Southwest Looms — a company that designs, manufactures, and sells an array of hand-woven carpets — for advice on how the average consumer might identify a rug’s quality (or lack thereof), he sighs, and says, “It’s very difficult.”

Like the fascia that lies just beneath our skin, connecting and stabilizing our muscles and organs, a well-chosen carpet will knit a room’s patterns, colors, and objects into a cohesive whole. Some aficionados claim the carpet is the soul of a room, and this is why many interior designers work from the floor up.
Yet, selecting a fine carpet for one’s home seems to be a refined skill that the average consumer can only acquire with time. 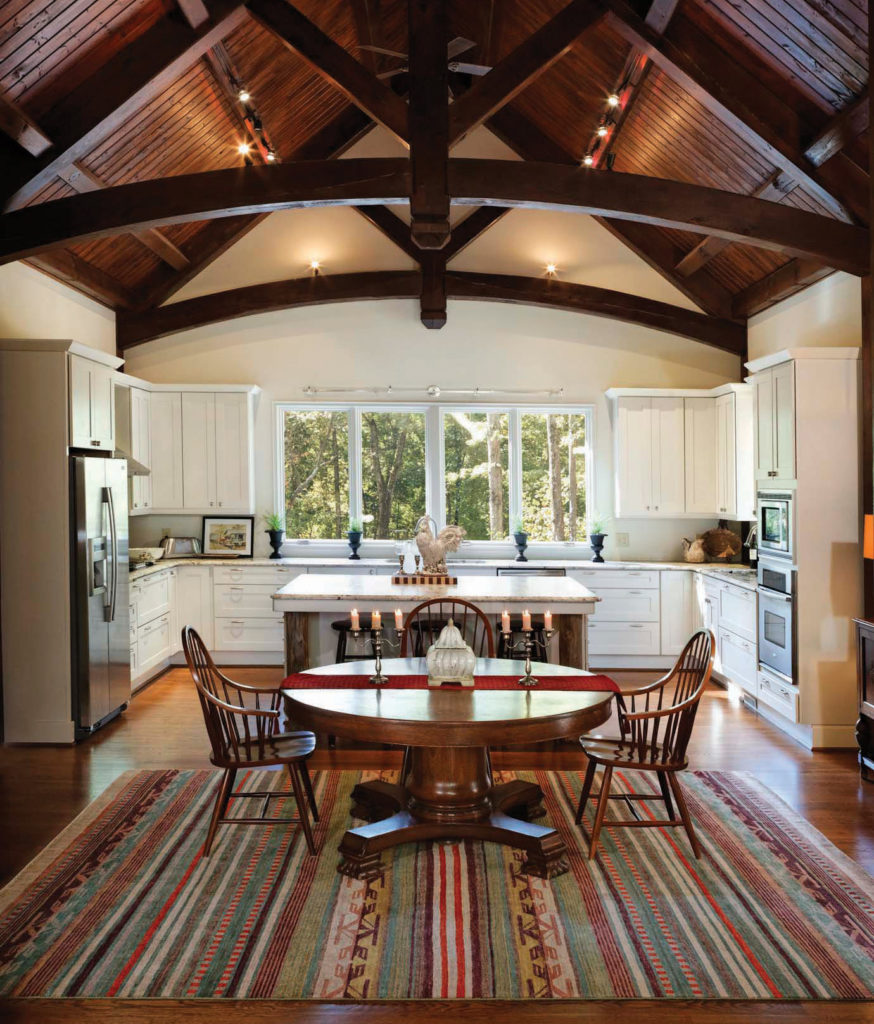 The earth colors and stripes in this hand-knotted 100 percent wool rug will look familiar to Pendleton blanket fans. With Southwest Looms’ exclusive license to use Pendleton designs for their carpets, this Chimayo pattern is a top seller. The hand-spun wool is from New Zealand.

It took Lay the better part of four decades to acquire this skill. He spent years exploring the carpet trade in all of the Central Asian countries, plus China and India. But most of his knowledge came from tribes in Central Asian countries that have historically raised sheep and created rugs for survival. In these places, weaving skills have been passed from mother to daughter over countless generations.

Lay’s carpet journey began accidentally in the 1960s, while on an expedition to survey the mammals of Iran for Chicago’s Field Museum. At the end of his first trip, Lay packed up all his inert creatures to bring home, including a wild donkey skeleton, plus a single inexpensive Baluch carpet from Baluchestan — his first. On the next trip, he brought home a few more. Soon enough, whenever he went to Iran, his colleagues asked if he would bring a carpet back for them. In the blink of an eye, he was consigning rugs for an Iranian rug merchant he’d befriended on one of his collecting trips. Businesses are born in mysterious ways.

Lay’s journey has all the good narrative elements, including chance, bold innovation, bad luck, perseverance, good luck, and celebrity. The celebrity part happened when he was growing up in Jackson, Mississippi, palling around with another young boy who grew up to be Elvis Presley. The young Elvis reportedly taught Lay how to cuss.

Camping at 15,000 feet in Nepal on another mammal collection trip, Lay was trying to exist on lentils and rice, when he finally gave in and ate raj punki (the local name for flying squirrel). Perhaps it was the raj punki that brought him the luck he experienced in 1991 in India, a decade after the Iranian revolution halted all exports from Iran. The luck came in the form of a rug agent that Lay met in New Delhi, a man who connected him with top-notch carpet producers in Jaipur, Varanasi, and Agra, the cities that comprise the heart of India’s thriving carpet industry. These are the companies that turned Lay’s Arts and Crafts designs into beautiful hand-woven pile carpets. 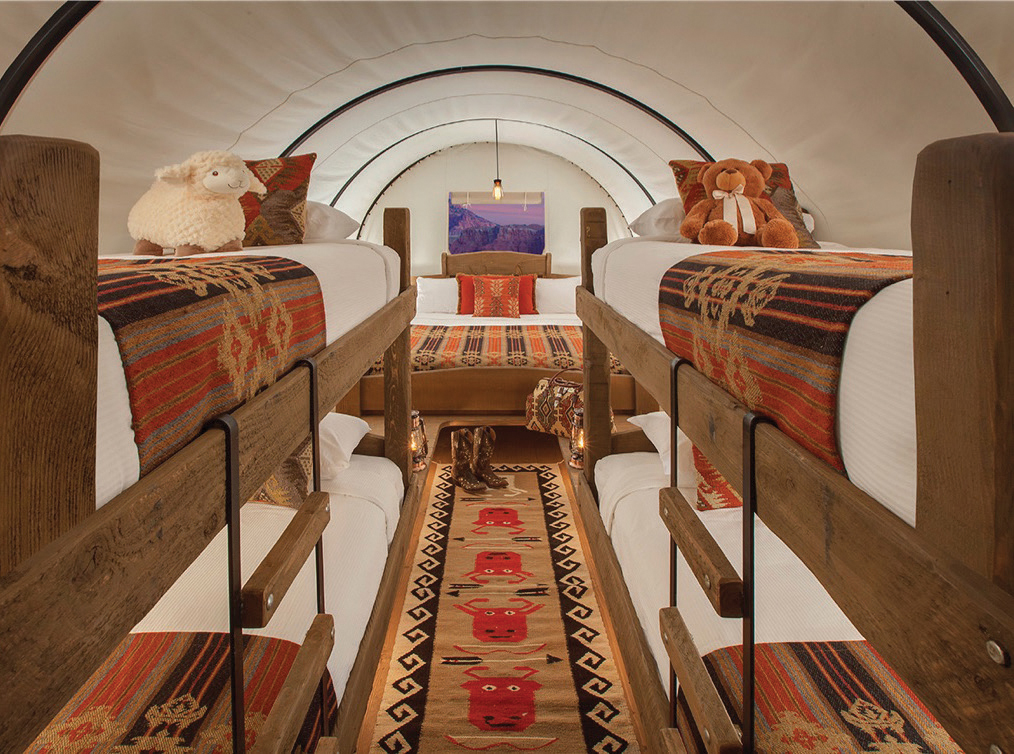 A bright runner lifts the Southwestern theme of this covered wagon suite several notches above the rest. Part of Southwest Looms’ Dreamcatcher Collection, which reproduces the texture, weave, and look of Native American textiles, this flat weave rug is named Cattle Call.

But Lay’s love of American Indian motifs simmered until 2007. That’s when he brought a few Navajo blankets to India to show his producers and find out if they could make a carpet that was similar in its colors, angled lines, and geometric shapes. The results became the basis of the company’s Dreamcatcher Collection.

When you’re evaluating a rug, a lot of things matter, says Lay. The quality of the wool, how it was put together, and if it was done thoroughly and packed tightly. When finished, were its colors properly fixed? And knot count is not the indicator of quality that some dealers would have you believe, but simply a function of design, says Lay.

“If you want a very intricate design, you’ve got to go to a high knot count to get those little details in there. But it doesn’t mean it’s any better than any other carpet; it just costs more to make it because there is more labor involved.”

Look out for the twin or jufti knot, which instead of going around two warp strings, goes around four. Carpets with these knots can be made faster, and though they don’t necessarily have a shorter life span, you can’t tell for sure without a close examination of how profuse the knots are within the carpet. Lay also recommends reviewing certificates of authenticity with skepticism. And lastly, he says, it is most important to buy what you love, and not what you imagine could boost your investment portfolio.

Come Prepared: Bring measurements, swatches, room photos, and questions. Consider whether the rug will be in a high-traffic area or if it will be an art piece.

Knot Count: Knot count is not necessarily an indicator of quality, but rather a function of design. Knots are either tied by hand, hand-woven on a loom, or machine-made. Turn the rug over for clues. The knots on a handmade carpet will be slightly uneven, a machine-made carpet will be uniform, and examples of rugs woven by nomadic groups will have looser knotting. Backings covering the knots should be viewed with suspicion.

The Fiber Test: Determine if a silk or wool carpet is authentic with a burn test. One can burn an unpicked knot or snippet of fringe; silk and wool will smolder while their synthetic substitutes will catch fire.

Material Palette: Rugs made with handspun wool and natural dyes hold their value best. Handspun wool is stronger and has more texture than machine-spun wool. It absorbs dye well and takes heavy use. Wool rugs are not nearly as valuable as silk, but they are more durable.

Evaluating Color: Dyes penetrate fibers differently; bend the carpet to expose the threads from the base to tip. Synthetic dyes will color them evenly, whereas natural ones may show variance. Rare colors such as Tyrian purple, saffron yellow, cochineal rose, and greens add to the carpet’s value, according to Kotlyars Auction.

Fair Trade: Ensure the carpet was made with ethical labor practices. Weavers should be paid a living wage, work in safe conditions, and have autonomy in the industry. Buy from trusted vendors who visit their weavers and understand the working conditions. Reputable dealers should come with references and positive reviews.

Value: The earlier the piece, the greater the value. Rugs woven before 1900, or earlier, are the most desirable because of their originality and natural dyes, including hues not found in later rugs. The earlier the rug was woven, the more wear and restoration is allowable.

Preservation and Care: Regularly vacuum and use a suction attachment. Avoid harsh cleaning agents, which may permanently change colors. Hand-woven carpets should never be dry cleaned or steam cleaned. Rotate your carpet 180 degrees periodically to minimize wear from foot traffic. Direct exposure to sunlight will fade any carpet. If concerned, consider installing a UV blocking film over windows.