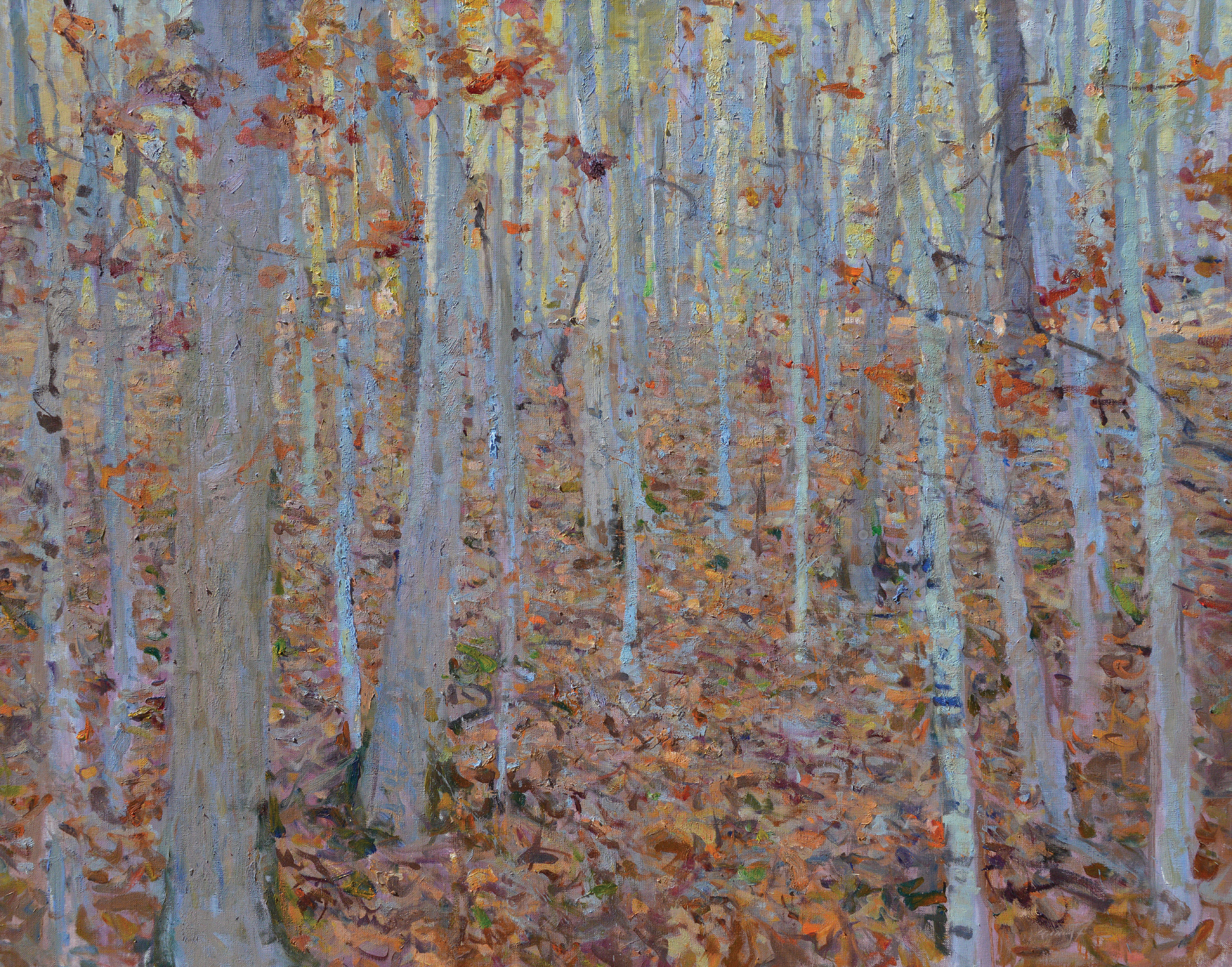 ONE OF THE MOST SIGNIFICANT ARTISTIC BREAKTHROUGHS in Quang Ho’s long career took place one day in West Virginia, when he carried his paints into an autumn forest, gazed around at the spectacular beauty — and didn’t paint. Instead, he found himself compelled to simply be, absorbing the feeling of paying exquisite attention to the magnificence around him. A multi-colored carpet of fallen leaves lay six inches deep around his feet, and the trees above him reached for the sky. Every direction held potential paintings. Yet, for the first time, he realized it was pointless to settle on an image when “one square foot of forest was infinitely interesting.” He packed up his paints and wandered through the quiet woods that entire day, and the next. 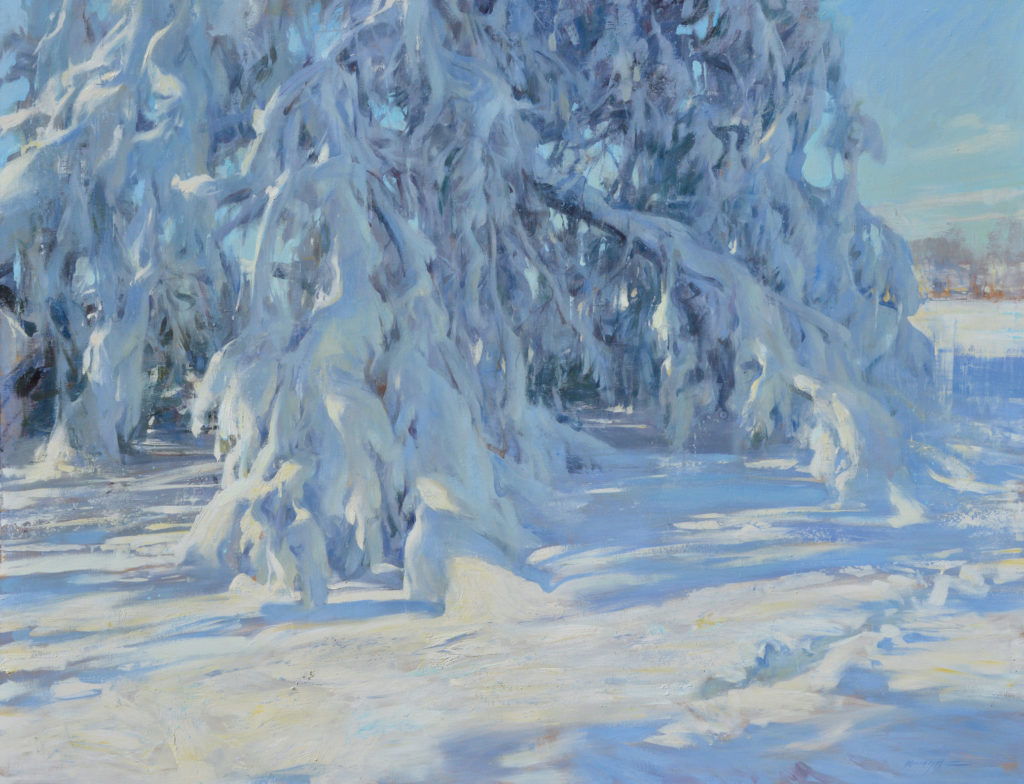 Ho has always had a contemplative nature, searching for meaning through painting, reading, meditation, and daily life. In recent years, however, the 56-year-old Vietnamese-American artist has experienced a growing alignment between how he sees the world — literally and philosophically — and how that vision translates onto canvas. In both art and life, he says, his aim is to avoid the human tendency to name, isolate, and separate things. In the realm of wordless observation, he believes, both art and living more clearly reflect what is real and true.

After his experience in West Virginia, Ho returned to his studio wanting to share the powerful impact of what he’d felt. The results include his largest paintings to date, some of which measure 6 by 8 feet. Among them is Still Pool, which depicts a forest pond with layers of leaves underwater, echoing the colorful foliage on its banks. The piece will be part of his solo exhibit, Process, opening February 15 and running through the 29th at Gallery 1261 in Denver, Colorado. 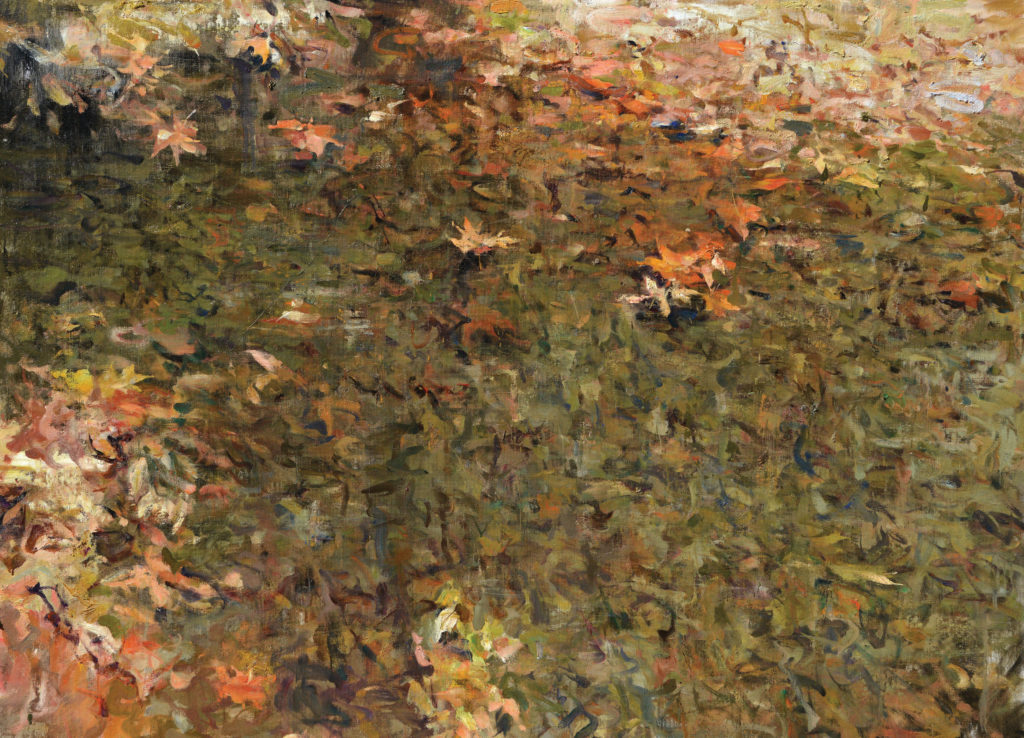 “We’re honored to debut the latest body of work by Quang Ho, one of the foremost artists of his generation,” says David Ethridge, Gallery 1261’s director. “We’re proud to have represented him for the past 15 years and are thrilled to present this exciting exhibition — his first solo show in 10 years.”

Process will feature between 20 and 30 paintings in genres ranging from landscape to cityscape and figurative to still life. Regardless of subject matter, the artist says, “The real essence of painting is the dialogue between shapes, tones, colors, textures, edges, and line.”

Over a 30-plus-year career, Ho’s deep understanding of these fundamental elements and their relationships has resulted in numerous awards, honors, and a broad collector base. It also allows him to effectively teach and talk about painting — formerly at the Denver Art Students League and more recently through workshops, videos, books, and public lectures. In summer and winter, he and his partner, painter Adrienne Stein, live and work in Denver, where Ho relishes painting the Colorado landscape and other subjects in both seasons. Spring and fall see the couple migrate to rural York County, Pennsylvania, where they own a circa-1763 stone house and two studios with large windows overlooking the wooded valley and hills.

Born in 1963 and raised in war-torn Vietnam in a city just south of the north-south divide, Ho had no access to libraries, art books, or original art while growing up. Still, as early as age 2, he was obsessed with drawing. Inspired by images in comic books, Ho worked on lined notebook paper using ballpoint pens. When he was 4, his father was captured by the Viet Cong and disappeared from the family’s life. In 1975, when he was 12, Ho left Vietnam with his mother and seven siblings. The family was sponsored by an American couple and settled in Denver. Decades later, Ho was able to bring his father to the U.S. to live. 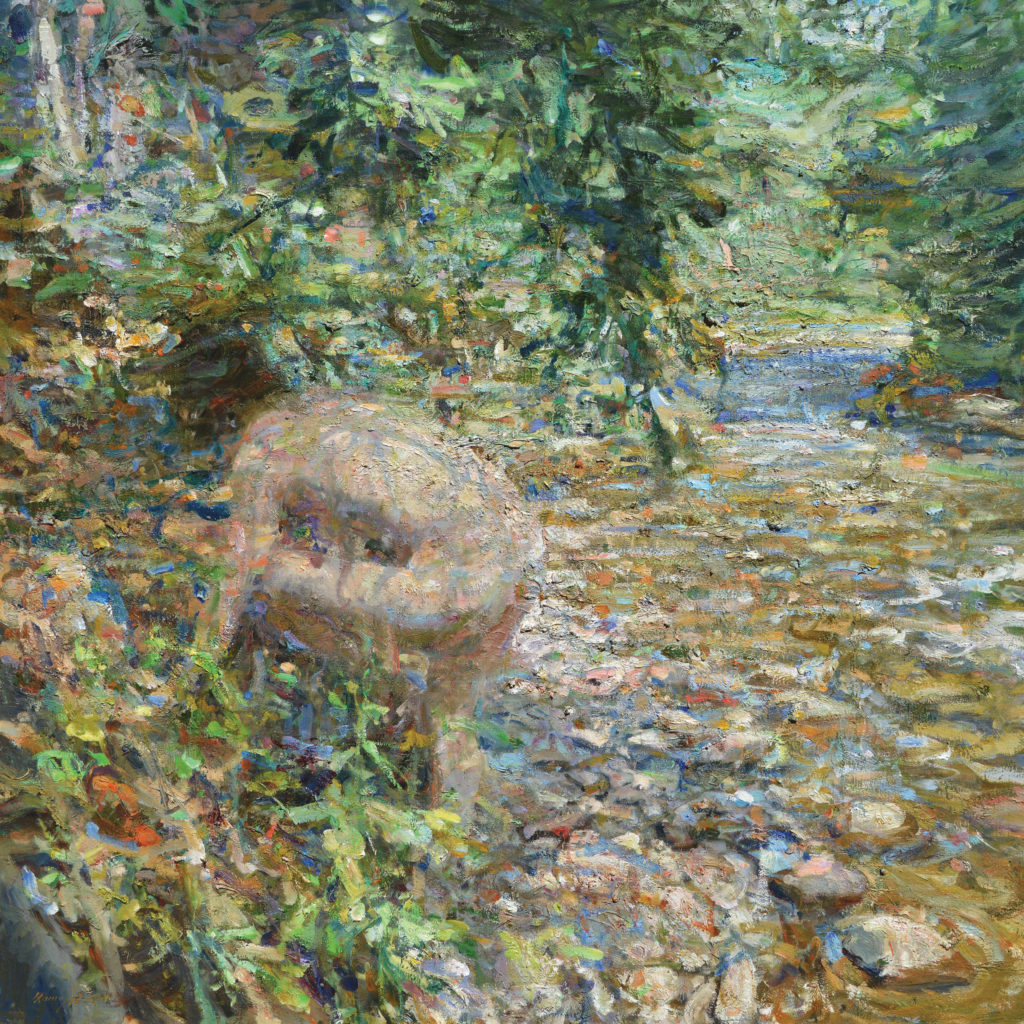 Ho continued refining his drawing skills through high school. When he was 16, he was riding his bike in Denver and came across Tomorrow’s Masters Gallery. He went in, mentioned that he loved to draw, and was invited to return with his artwork to show the owner. The result was his first one-artist show of drawings and watercolor paintings, his first exposure to art-world success. Painting in oils would begin a few years later when he received an Art Award to attend the Colorado Institute of Art. There, one memorable afternoon, he met the artist who became his mentor and imparted art wisdom that has underpinned his efforts ever since.

Ho and other students were painting a live model when instructor René Bruhin wandered into the classroom. He looked at Ho’s painting, nudged the young man aside, grabbed a brush, and in five minutes, had painted over Ho’s work in a way that was exponentially better. Then without a word, he walked back out. “I thought, what did he just do?” Ho recalls. “In one swoop, he showed me I didn’t know anything about painting.” After that, he sought out Bruhin with painting questions or problems. He found that the older artist could explain art history and principles like no one else he had ever known, before or since.

As Ho continued his inquiry into art and philosophy, over the years he began to articulate the difference between what he calls romantic beauty and classical beauty, a distinction later affirmed for the artist in Robert Pirsig’s book, Zen and the Art of Motorcycle Maintenance. Romantic beauty is based on an emotional response to something — a result of associations, memory, or other emotional impulses, Ho says. Classical beauty, on the other hand, derives its aesthetic qualities purely from its fundamental components and how they are combined. “It has to do with deep structural integrity,” he says. He places his artwork squarely on the classical side. 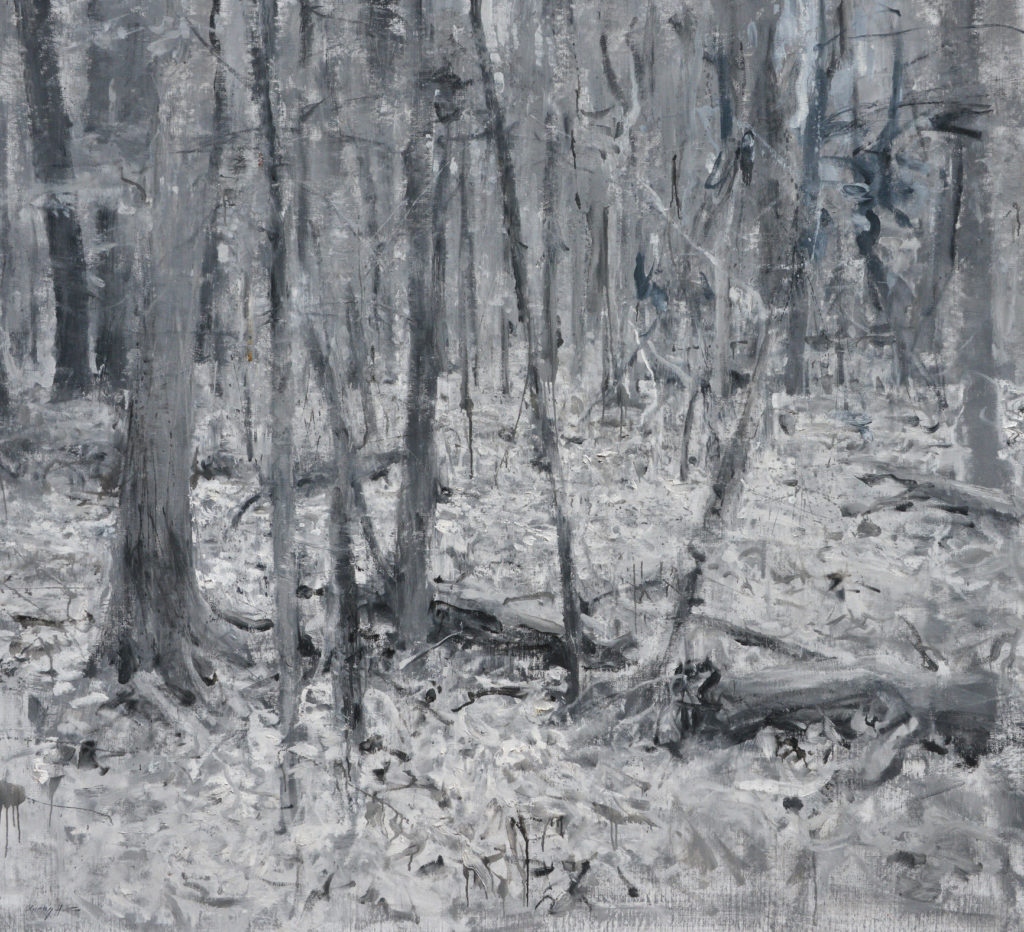 Because Ho understands a painting’s elements, virtually anything he sees can inspire an exploration on canvas, with any component as the starting point. He may paint the same subject multiple times using several approaches, sometimes tilting toward abstraction, other times more representationally, although never in a highly literal way. As with the works that emerged from his West Virginia trip, he begins with a desire to convey an experience. “But when the paint hits the canvas, it becomes a whole different visual vocabulary — it becomes music and sound and rhythm that has to make sense together,” he says. “Each painting is a search for beauty.”

Seth Hopkins, executive director of the Booth Western Art Museum in Cartersville, Georgia, appreciates this quality in his work. Ho and landscape painter Scott Christensen were honored with a two-artist exhibition at the Booth in 2019. “What impresses me most about Quang is, unlike many artists, he is not a slave to his subjects or even his own style. He has the ability, perceptiveness, and skill to get excited about nearly any subject and then render it with enthusiasm in the manner he feels will best convey his excitement and the essence of that subject,” Hopkins says. “He uses simple applications of the basic concepts of art and design, and yet produces some of the most complex and visually stunning works in American art today.” 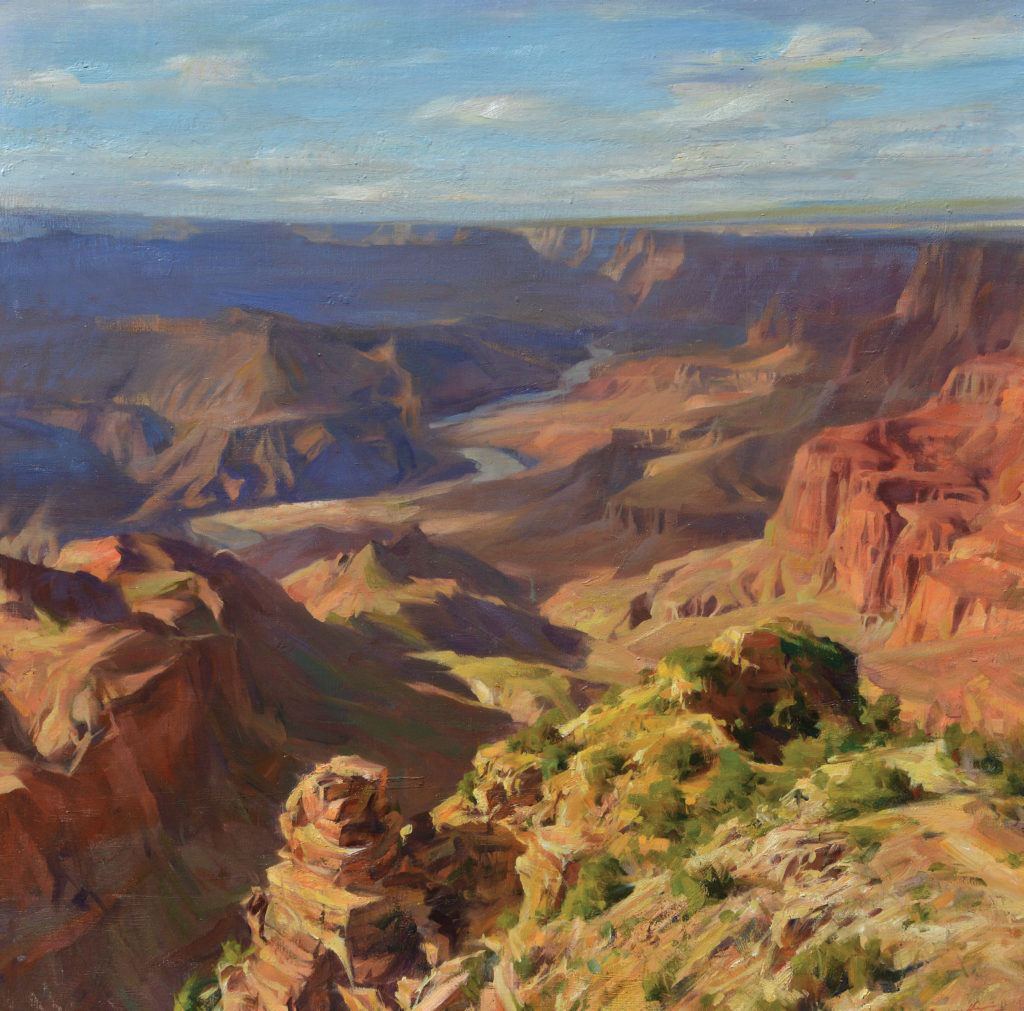 Ho believes one key to painting as he does has been the years-long process of “learning to unlearn what I thought I knew.” That is, stepping out of the habit of naming and separating everything in his perceptual field. He imagines gaining vision for the first time after a lifetime of blindness, with no recognition of individual objects: house, tree, person, dog. With paintbrush in hand, or simply taking in his surroundings as in the West Virginia woods, he practices seeing in this way, and then painting what he sees. “When there’s only pure visual stimulus, there’s no separation between things. That’s what art is,” he says. “When I look at a landscape, I see the connectedness immediately, and then I see the bits and parts and how they fit together.”

This visual and artistic approach has a spiritual equivalent in the practice of quieting the mind to take in people and situations without judgment or preconception, Ho says. On canvas, he expresses the absence of visual separation through the use of color and value. Through reading, reflection, and meditation, he understands interconnectedness as the true nature of life. In both cases, he says, “It’s a beautiful challenge. It takes a lifetime of learning how to do it well.”