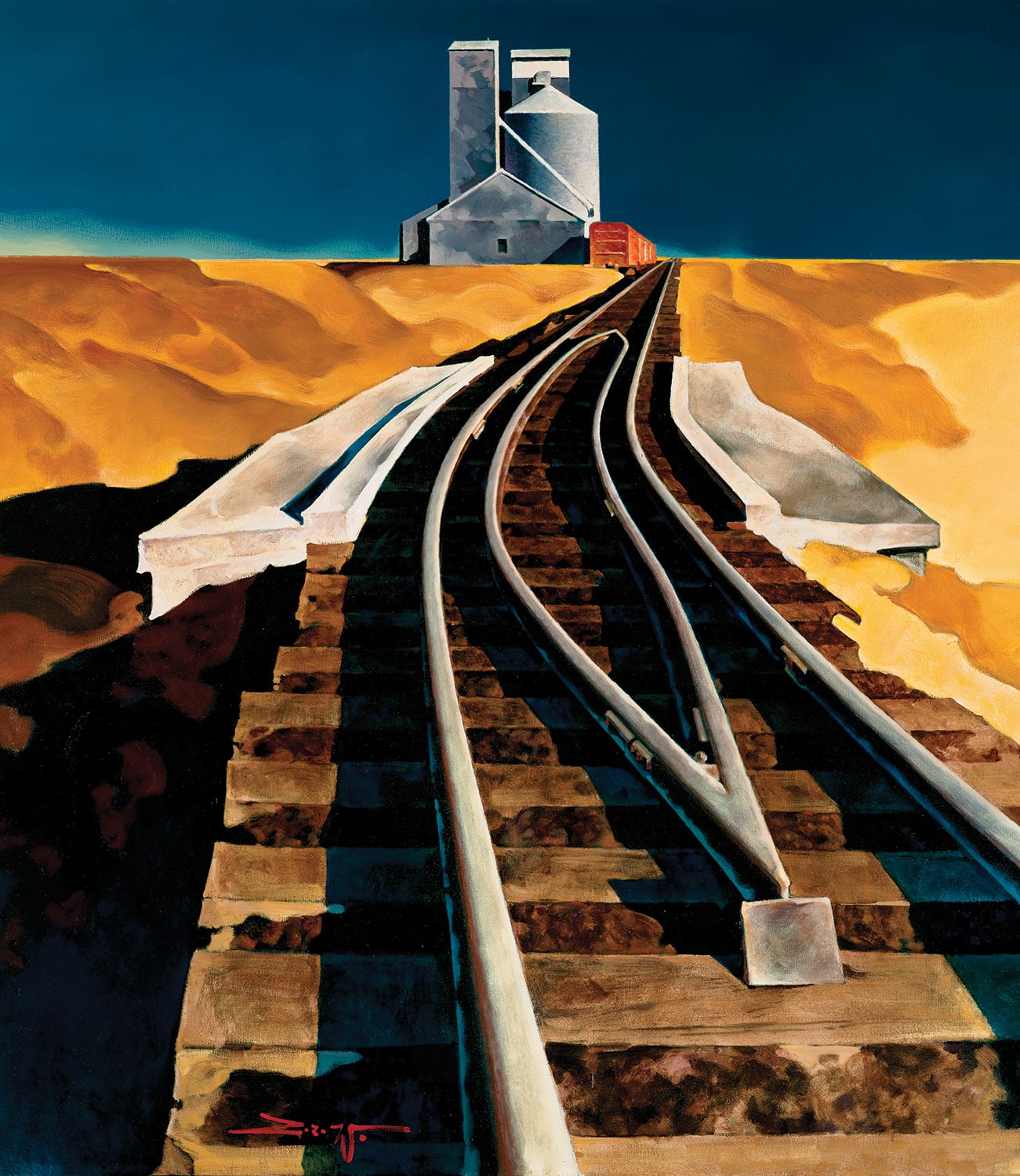 A COUPLE OF YEARS AGO, I decided to self-publish one of my novels which had gone out of print. When it came time to design the cover, the painting I chose was of a car coming up over a hill, surrounded by bright yellow fields of wheat. It was by artist Z.Z. Wei and had made an immediate impression on me.

I sent Wei an email, telling him I was interested in using his painting, Wine Country, for a book cover and wondered whether he would be willing to give me permission, and if so, how much it would cost. 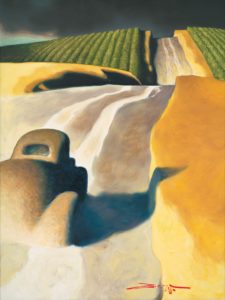 A few weeks later, I received a reply from the artist’s wife, Lin. It explained they had spent a lot of time in Montana and loved the state, and they also had read my work and Wei would be honored if I used his painting for the cover of my book. The cost would be “between one dollar and a million dollars, depending on your budget.” Oh, and she also asked for two signed copies, “because we have two children and we don’t want them fighting over it.” I sent Wei a modest check for use of the image, which, Lin emailed to tell me, they would pass along to an artist who needed it more than they do.

This whole exchange tells you everything you need to know about Wei as a person. What I did not know at the time was how highly regarded he is as an artist, because, of course, he didn’t come across that way in the least.

Wei was born in 1957 and raised in Beijing, China. His family was Catholic, which made them a minority in their region and put him at a disadvantage socially. His parents believed in many Chinese traditions, particularly in the role of art in society. Wei was fortunate to have a father who loved painting, producing traditional Chinese paintings of his own, so when a young Wei showed talent in that area, his father gave him the kind of praise and encouragement for which most artists could only dream. His upbringing also established a strong philosophy regarding landscape painting that is still deeply ingrained in his approach to his work. 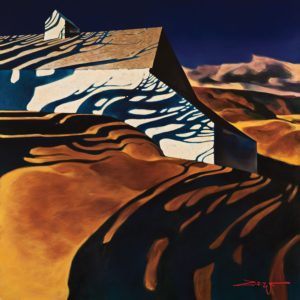 “Landscape painting is considered the most important and prestigious style of traditional Chinese art — far more important than portraits that directly depict people,” Wei says. “Artists (mostly scholars) would find sustenance in nature, in ‘mountains and waters.’ They don’t usually paint real places but the impression or idealization of landscapes. It’s more of an abstract interpretation than realist rendering. In other words, their own inner landscape.”

Wei was 8 when the Cultural Revolution took over his home country, and because his parents were traditionalists and Catholics, his family was often ostracized and held up to ridicule. The tradition of painting was banned from view and discussion in China because it was perceived as a remnant of the imperial government. There was not a lot of opportunity to create art that showed any sense of personality or freedom at the time. This cultural history dramatically affected Wei’s development as an artist. After graduating high school, Wei was sent to work on farms in the country as part of a “re-education” program designed to teach the proletariat how fortunate they were to live in the city. After two years, he was recruited from the farm to work for a large theater company in Beijing, and while working there he applied for college. 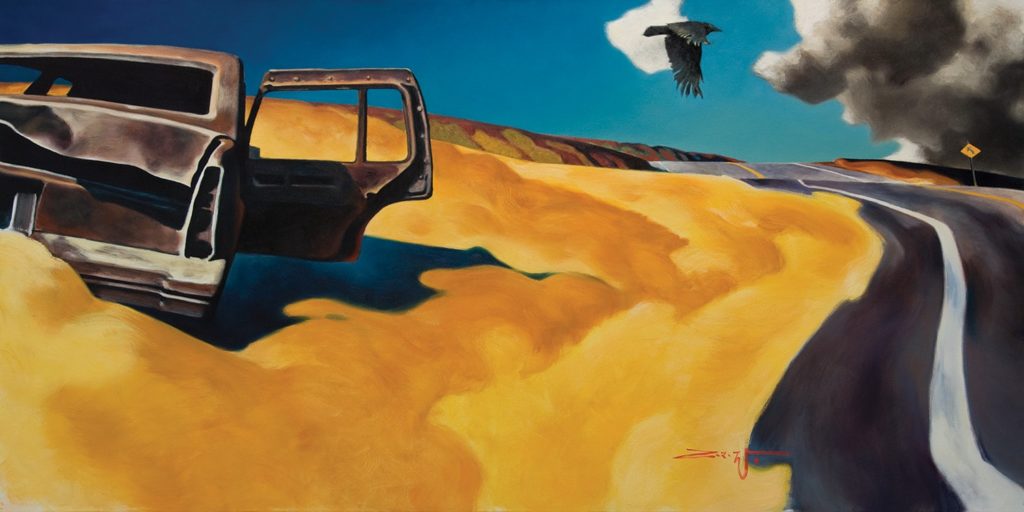 After graduating from the Central Institute of Arts & Design, (now the Academy of Arts and Design of Tsinghua University) in Beijing, he and two other people started the Beijing Artistic Tapestry Center.

Tapestry, or “soft sculpture,” was considered somewhat rebellious then, and this medium gave Wei an outlet he embraced. The center developed a strong reputation for its innovative work until it was shut down for being too subversive.

By this time, a woman named Kaye Bickford, president of Bickford China Ltd., recommended Wei’s work to Davidson Galleries in Seattle, Washington, which started carrying it. This was Wei’s first exposure in America, and his paintings soon drew the attention of Centrum, an artists’ organization in Port Townsend, Washington. It was in the process of planning an artist-exchange program, and Wei was one of its first choices. He flew to Seattle in 1989, sitting by the window to get the best possible view. 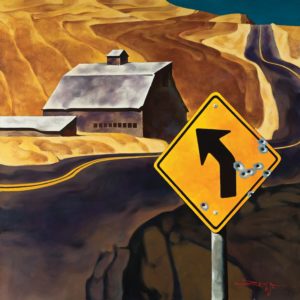 “I always think that art is an artist’s response to life. It is his or her reflection on the surrounding environment, nature and culture,” Wei says. “At least that’s what I strived to do when I was in China and continue to do so after I came here. I must say that coming to the United States, to the Northwest, had a profound effect on my art.”

The culture shock most people might experience coming to a new country was lost on Wei. If anything, he found Seattle to be “empty” compared with his home town. He remembers wandering the streets and wondering where all the people were.

After the exchange program was finished, Wei decided to stay for a short time to see what opportunities might come his way, and they quickly did. He was invited to serve as resident artist at Whitman College in Walla Walla, Washington, and to show his work at the Sheehan Gallery there. He quickly fell in love with the region, especially the quiet, agricultural Palouse. His description of the Palouse also provides a perfect template for the artist’s paintings: “What a magical place. It’s such a different world from what I’d experienced in person or read in books — as if I were given a new pair of eyes, a new vision,” he says. “The Palouse has no lavish adornments, but dotted with barns and farm structures, country roads wandering through to the end of the horizon, quiet, tranquil, full of melodious rhythm. The golden fields, red barns, deep blue sky, while clouds and dark thunder storms — together they create a world of color that’s so striking I can’t help but fall in love. It’s exhilarating, quiet and powerful. It’s not the kind of sensory stimulation from fleeting vanity or debauchery.”

It was also in Walla Walla that Wei developed a love of cars. He got his first car when he moved there and would spend hours driving around the area, looking for inspiration. “When I came home, I would paint the most memorable impression of that drive. At one time, I had paintings on 16-by-20-inch boards that stacked a few feet tall. I realized that there must be some sort of affection and spiritual power behind all this, something fundamental and universal to human beings,” he says. “This kind of passion released me from art theory.” 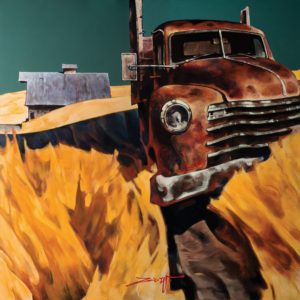 Last spring, I received an email from Lin telling me that she, her husband and two sons were going to be in Montana that summer, and we arranged to meet at Fairmont Hot Springs. For two hours, we laughed and delighted in each others’ company. Although Wei has lived in America for almost 30 years now, he doesn’t speak English, so Lin serves as his business manager as well as his interpreter. “When we first met in Walla Walla,” she says, “he tried to learn English, but I would get so impatient waiting for him that I would just jump in and interpret for him. It was a big mistake on my part. I’ve been doing it ever since.” She and Wei both laughed. We posed for photos with my novel featuring Wei’s painting on the cover and parted with warm hugs.

I came away from the meeting with such a powerful feeling that this man’s devotion to his art has had a profound impact on the way he sees the world and its people, a sentiment that he sums up very nicely here, with Lin’s help, of course.

“To me, landscape is not just a unique natural attraction, nor just a story. Landscape painting is the way I choose to express my contemplation and affection for this world. This form of art speaks its own language that other media fails to translate. And that’s the fundamental value and meaning for its existence.”

Born and educated in China, Z. Z. Wei’s views of America allow us to see the hopefulness of a newcomer. His paintings transport us to a place where time stands still. His compositions portray quiet, yet powerful images reminiscent of a whimsical, rural America. Richly complex, they are filled with humor and loneliness, peacefulness and pain. They balance half in shadow, half in light, tempting us to experience a unique and timeless look at life. Wei will be the featured artist for the 2018 Southeastern Cowboy Gathering with an opening reception planned for March 8.