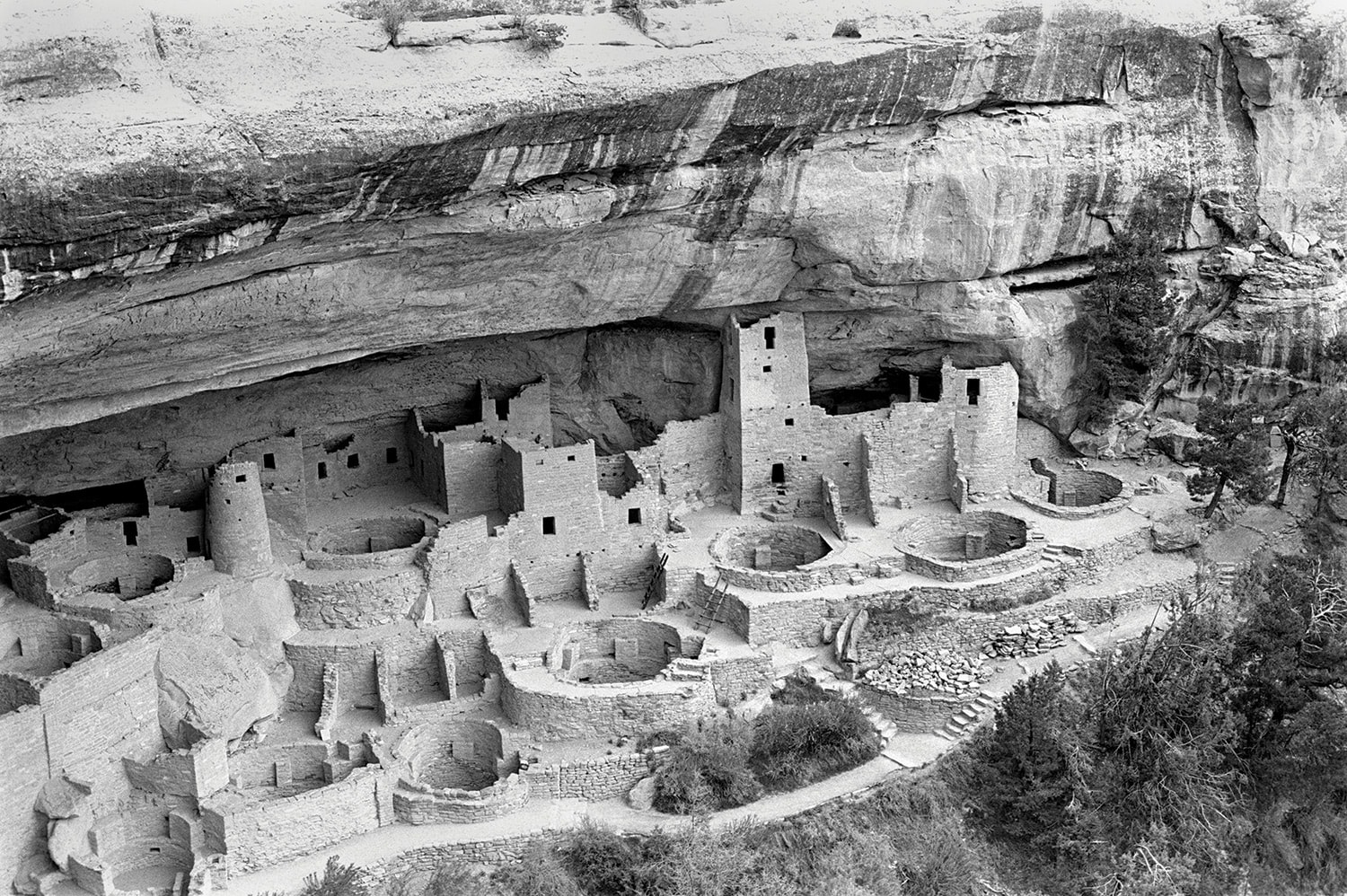 Barbara Sparks’ photograph, "Immortal Repose," depicts Cliff Palace, which was first discovered on December 18, 1888 by two ranchers looking for stray cattle. For the next 18 years people visited the site, camping among the ruins and often taking artifacts. In 1906, Mesa Verde was declared a national park to “preserve the works of man.”

Hiking the archeological sites of Southwestern Colorado had been on my bucket list for years, always getting shoved aside for more exotic destinations. After all, it was an easy day’s drive from my home in Denver and, well, it’s not like it was going anywhere, right? 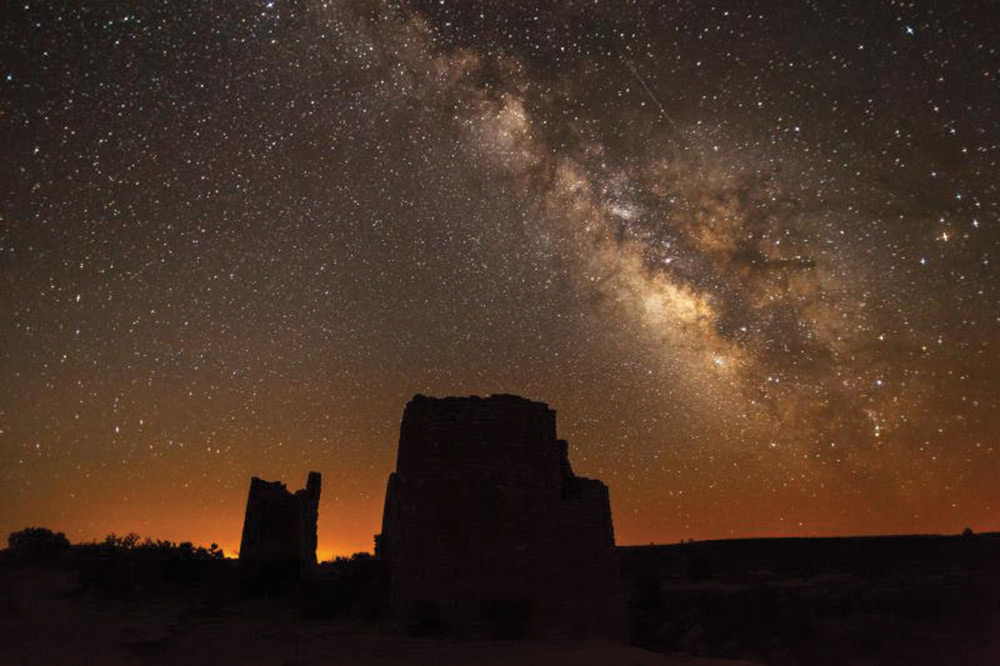 Yet, one afternoon, while thumbing through black-and-white images slated for a book I was editing for photographer Barbara Sparks, I stopped on her series of photos of Mesa Verde. The images were, for lack of a better word, surreal. Honestly, I couldn’t fathom what I was seeing and began pressing her for details: How big was this place? Who lived there? How were these formations built? What was the history of this place? 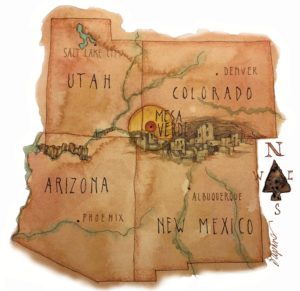 As she talked, I placed her loop on the photos and squinted into the magnifying lens. And that’s when it happened: Mesa Verde and the Colorado Plateau moved to the top of my bucket list; I had to see this for myself.

The immense plateau that spans the western length of Colorado and spreads out into Utah, New Mexico and Arizona is a treasure trove of archeological and anthropological riches, and a playground for photographers and painters alike. The land itself is a moonscape of unreal outcroppings, monuments and formations created over hundreds of millions of years. Though now a high desert, it was once covered by inland seas that, over time, abated and in so doing, eroded the sandstone deposits, exposing structures of once-active volcanos — Ute Mountain and Shiprock are two well-known examples — and carved bizarre jutting formations, most notably, Mexican Hat with its 60-foot-diameter disc balanced atop a narrow spike of stone. 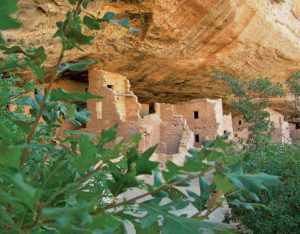 Erosion also sculpted the pockets of space into which, some 1,400 years ago, humans built dwellings. First pit homes, then the more elaborate structures made of adobe bricks with wood beams, a system of ladders, kivas, storage areas and water collection spots. Communal gathering centers came into being.

Amid the ancient settlements are also petroglyphs and pictographs that researchers are still uncovering. I find it amazing that the work of the first artists of Mesa Verde transcends time and communicates with us still.

For modern shutterbugs, rock hounds and history buffs, climate is the magic ingredient to this scene. The Southwest/Four Corners area of the U.S. receives less than 10 inches of rainfall a year, resulting in a palette of sparse and unusual botanicals. As Wallace Stegner wrote, “It is scenically the most spectacular and humanly the least useable of all our regions.” 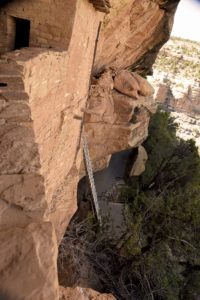 Leaning over the side of Balcony House, we glimpsed the 32-foot ladder we climbed, heading the warning from our guide not to look down. Photo: David Fredrick

The lure for artists, according to Sparks, is that this unique vegetation, combined with the clear, thin air of the high desert perfectly accents the sculpted land like nowhere else in the world. Yet the arid nature of the land has also made it rather fragile, like a china vase, bone dry and easily fractured. In 2000, the Pony and Bircher Fires, both started by lightning, destroyed more than 20,000 acres and vast swaths of slow-growing piñon and junipers that will take another 400 years to grow back, if they do at all.

A trip to Southwestern Colorado is for adventurers of all levels and is the perfect family vacation. It shouldn’t be restricted to Mesa Verde National Park, though with limited time it would be best to plan at least two days in the park; there’s simply too much to see in an afternoon. Most excursions to the cliff dwellings are ranger-led and require a timed ticket. During peak season — when schools are out for summer — it’s best to make your reservation online before you leave home.

There are many hotels to choose from in the surrounding towns of Durango (36 miles away), Cortez (10 miles away) or Mancos (8 miles away) but, if you’re serious about seeing the sites of Mesa Verde, consider staying at Far View Lodge, located in the park and surrounded by more than 600 cliff dwellings. From the lodge, my family and I hiked from sun-up to sun-down, happy for the knowledgeable rangers who led us up ladders, pointed out ancient footholds, pictographs and petroglyphs. In the evenings, we lay in the grass and marveled at the vast blanket of stars and planets shimmering before us, uninhibited by light pollution. 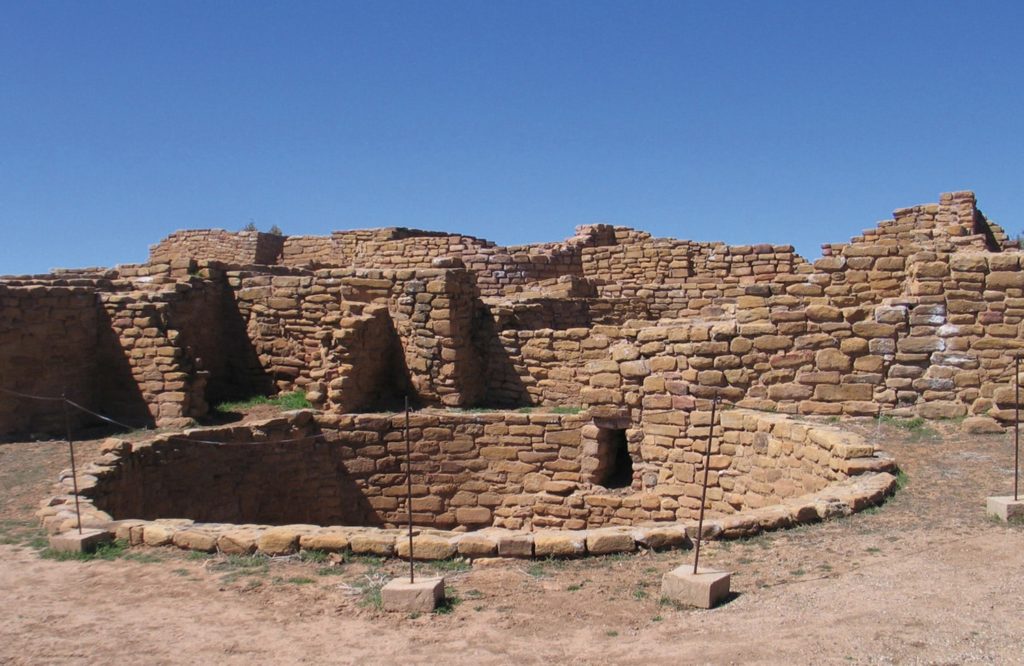 One afternoon was reserved for the drive to Four Corners to take snapshots of the kids stretched out into four states at once. I wish now, looking back, that we’d tacked on a couple more days to venture into the Canyons of the Ancients and Hovenweep National Monument. Approximately 55 miles from Mesa Verde, Hovenweep is lesser known — read: not crowded with tourists — but packed with stunning views and easy hikes to petroglyphs and ruins. Consider booking a cabin at the Canyon of the Ancients Guest Ranch which, by all accounts, is your best bet for taking in the beauty of this land. Garry and Ming Adams, owners and proprietors, will help familiarize you with the area, as well as tell you stories of ranching life in the canyon. They raise Navajo-Churro sheep, a breed first introduced to our country by the Spanish in the 16th century. Low in lanolin, this sheep’s fleece grows in a variety of colors that enabled the Navajo to weave rugs without having to dye the wool. 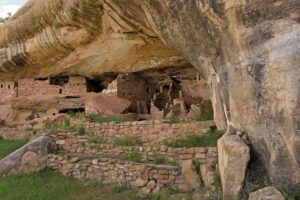 Mug House, named for the three mugs found within the dwelling, was abandoned along with all other settlements in Mesa Verde by 1300, after 23 years of draughts.

So, pack your hiking shoes, backpacks and cameras, and move the Colorado Plateau a little higher up on your bucket list. You won’t be sorry.