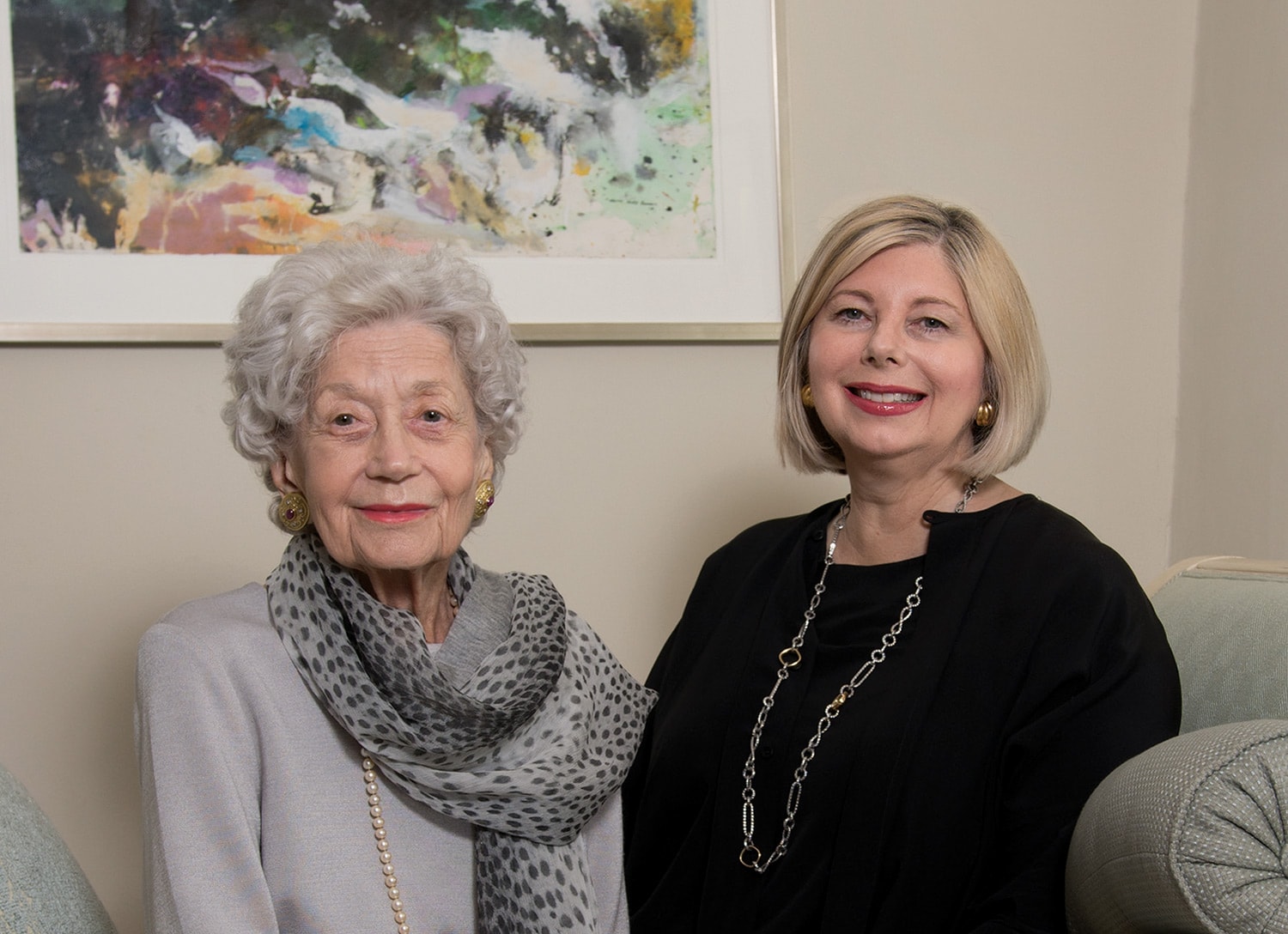 It could be that the spirits of Gertrude Stein and Mabel Dodge Luhan live today in the personas of Betty Barber-Hughes and Jerre Lynn Vanier. As mother and daughter, these two have built their lives around the arts. In Paradise Valley, Arizona, they collaborate to present art salons, focusing on artists they know and love, just as the two famed dames of art did during their lifetimes.

It all started when Barber-Hughes, now 87, said, “Why don’t we do a salon for Adele Seronde and honor her?” Seronde, who studied with Hans Hofmann, is not only a painter but also a poet. And that first salon was only the beginning. “We felt like we captured the spirit of the movie ‘Midnight in Paris,’” says Barber-Hughes, “and we didn’t want it to stop.”

Both Barber-Hughes and Vanier express their delight at the reception their salons have garnered, regularly attracting 60 to 80 patrons who gather to experience art in their home.

The love of art was instilled in Barber-Hughes as a child. Her aunt was a painter, and she followed in her footsteps, studying art at Texas State College for Women (now, Texas Woman’s University) in Denton. Then she went on to design fabrics. When she met Vanier’s father, Jerry D. Barber, the couple began collecting art early in their marriage. “He had such a good eye for art,” Barber-Hughes says. “He could walk into a room and choose the best. One time it was a Nicolai Fechin when no one knew who Fechin was.” Barber-Hughes second husband, Erville Hughes, also supported her love of art for 25 years.

Together, the family built a large collection with such artists as Beth Ames Swartz, Pop Chalee, Billy Schenck, Genevieve Reckling, Anne Coe, Don Gray and Jessie Benton Evans, as well as others.

Growing up around art, it’s no wonder Vanier became a natural at knowing and loving it. Through her parents, she became acquainted with patron Frederic Renner, C.M. Russell’s next-door neighbor in Montana and an authority on the famous artist. She remembers stories Renner told at gatherings about how Nancy, Russell’s wife, would shoo the two of them out of the house when she became tired of their hanging around. While pursuing her degree at Arizona State University, Vanier studied with Renner, which allowed her to sit alongside him as he appraised Russell’s art.

“Fred loved peanut brittle,” she remembers, “and would nibble it as he was pondering a piece. There was a time when I sold a major Russell painting and Fred said, ‘I want you to know, I put your name on the back that you sold it.’”

During her career, Vanier worked at Trailside Galleries in Scottsdale, Arizona, gaining knowledge of Western art. She also loved contemporary art and served as the director of 19th- and 20th-century art at the Joy Tash Gallery. There, she came to know the French painter Françoise Gilot, Pablo Picasso’s muse and the mother of his two children. Gilot later married Jonas Salk, the inventor of the polio vaccine that changed the world. Vanier recalls sitting in a sidewalk café in Paris with gallery owner Joy Tash and Gilot, who was recalling some of her fondest memories. Vanier asked Gilot what it was like to be married to two famous men. Gilot bluntly replied, “Very difficult.”

The mother-daughter duo intend to pass the art of collecting down to Barber-Hughes’ grandchildren and Vanier’s children, Jared Wick and actress Jolie Vanier. Barber-Hughes says, “I always tell the children, ‘Never sell the art. Keep collecting.’ Our belief is to inspire them to continue to collect, appreciate it and protect it.”

Betty Barber-Hughes: Art makes me happy! Art and beautiful music are a feast for my soul. Also, it’s the excitement of color — the wilder the better. It makes your heart sing.

Jerre Lynn Vanier: There’s nothing I like to collect more than associations with artists; I love being a part of history with them.

WA&A: What was the first work you purchased, and what made you choose it?

B.B.H.: It was an early watercolor of Beth Ames Swartz, a big, thick watercolor on paper. We went on to collect many of her works.

J.L.V.: The first work I owned was an Andrew Dasburg work on paper that my parents gave me. It was very rare. Then I started collecting the artists I met while working at Southwest Graphics — Kevin Red Star, Ed Mell and Paul Dyck, among others.

B.B.H.: There was one that almost got away. We’d visited the studio of Genevieve Reckling and purchased two of her Tahitian pieces and saw another one titled The Three Graces. Jerre Lynn’s dad was critically ill at the time, so we didn’t buy it. When we saw it in a magazine, either Connoisseur or ARTnews, it was then we knew we had to have it.

J.L.V.: I would give anything to have a Françoise Gilot painting.

WA&A: How did the salons start?

B.B.H.: It started when I thought of Adele Seronde’s birthday. She was turning 92, and was still painting, writing poetry and being a visionary for others. She is from Maine and lives in Sedona.

J.L.V.: Mother thought it would be wonderful to have a salon for Seronde. After that mother said, ‘I think we should just have it for all of these wonderful artists we know, like Beth Ames Swartz and the Coe sisters — painter Anne and her sister, Kathryn, an anthropologist. We went on to feature Paradise Valley artist Patsy Lowry and partners Jo-Ann Lowney and Joel Coplin.

B.B.H.: I think it would have to be Monet. His work is so endearing to me.

J.L.V.: I’d say van Gogh but he had that ear issue… I love van Gogh’s art, but if I had to choose, it would be one of the artists painting during the 1920s, perhaps Modigliani. Or Matisse. I love them all! Oh, but then there’s Rothko… oh my!