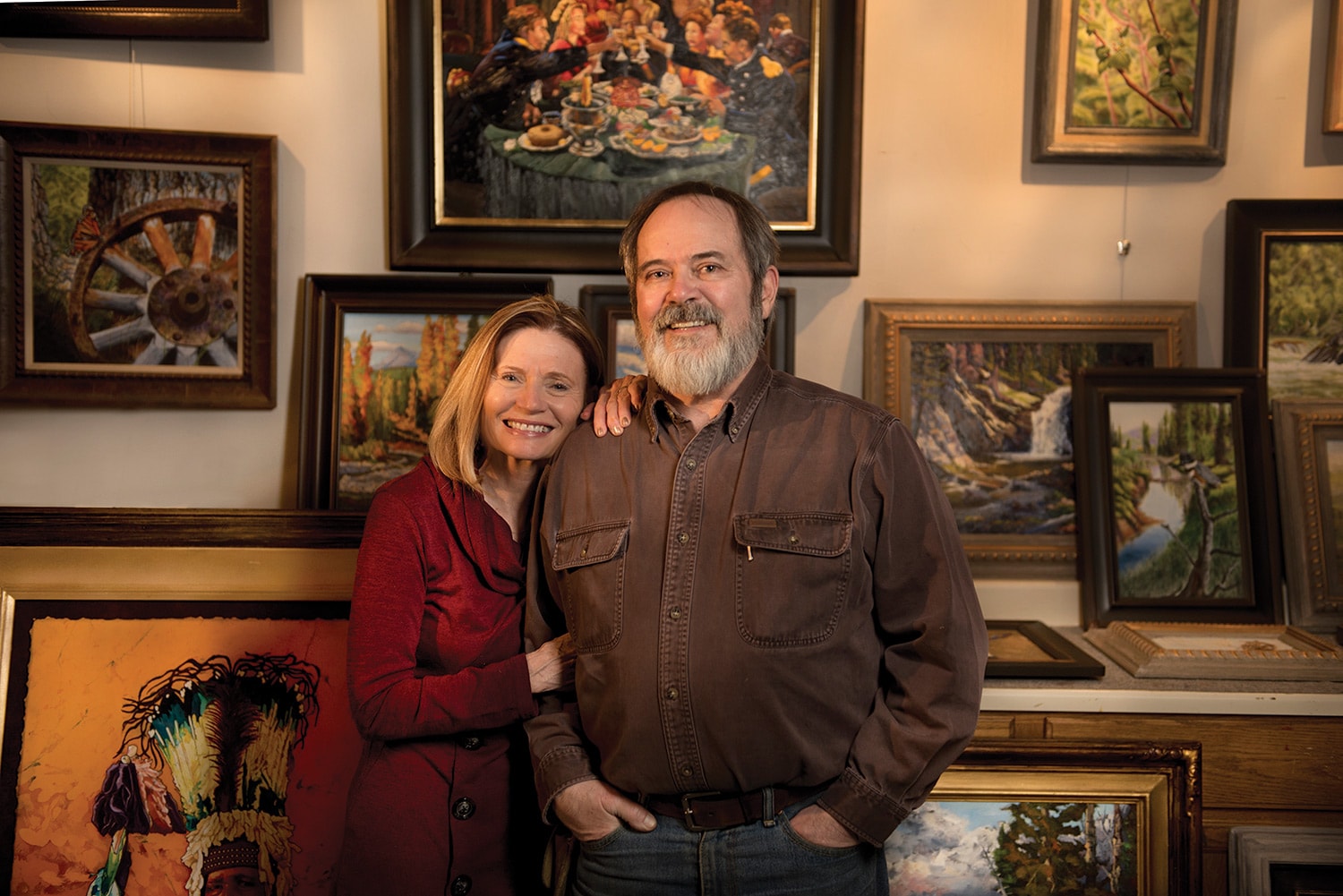 Artists Ron and Echo Ukrainetz share one of their in-home studios in Great Falls, Montana, along with a love of fine art.

09 May In the Studio: Echo and Ron Ukrainetz

As pleasant and refined, cluttered and inspiring as one’s art studio may be, the truth is that art, in many mediums, can be messy. Most artists will put on their work clothes, maybe overalls or a smock, before getting down to business, cleaning scraps of clay or splatters of paint at the end of the day. Some artists leave them there indefinitely, marks that add to the character of the space. 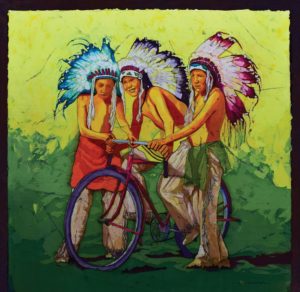 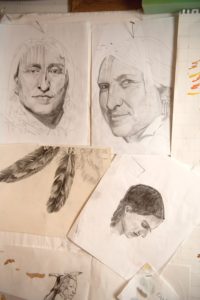 Echo’s pencil sketches are used for reference and are typically the first step in her process.

But not many studios get quite as messy as that of a batik artist, and that’s exactly why Echo Ukrainetz has not one, but two studios in her Great Falls, Montana, home. “My workspace will never be beautiful,” she says. “I have great lighting in a room with linoleum floors, but by the time I’m done, there’s wax all over. It’s just for utility; changing the flooring or painting the walls would be like putting perfume on a pig.”

Located downstairs, with an air purifying fan and exhaust system that runs during work hours, this is where Echo does the intricate work involved in her realistic batik creations: stretching a white cloth tightly onto a frame, drawing her designs, waxing, painting on dye with a thin brush, bleaching out the bleeds, and then repeating the process over and over. Some pieces require more than 200 applications and months to complete. 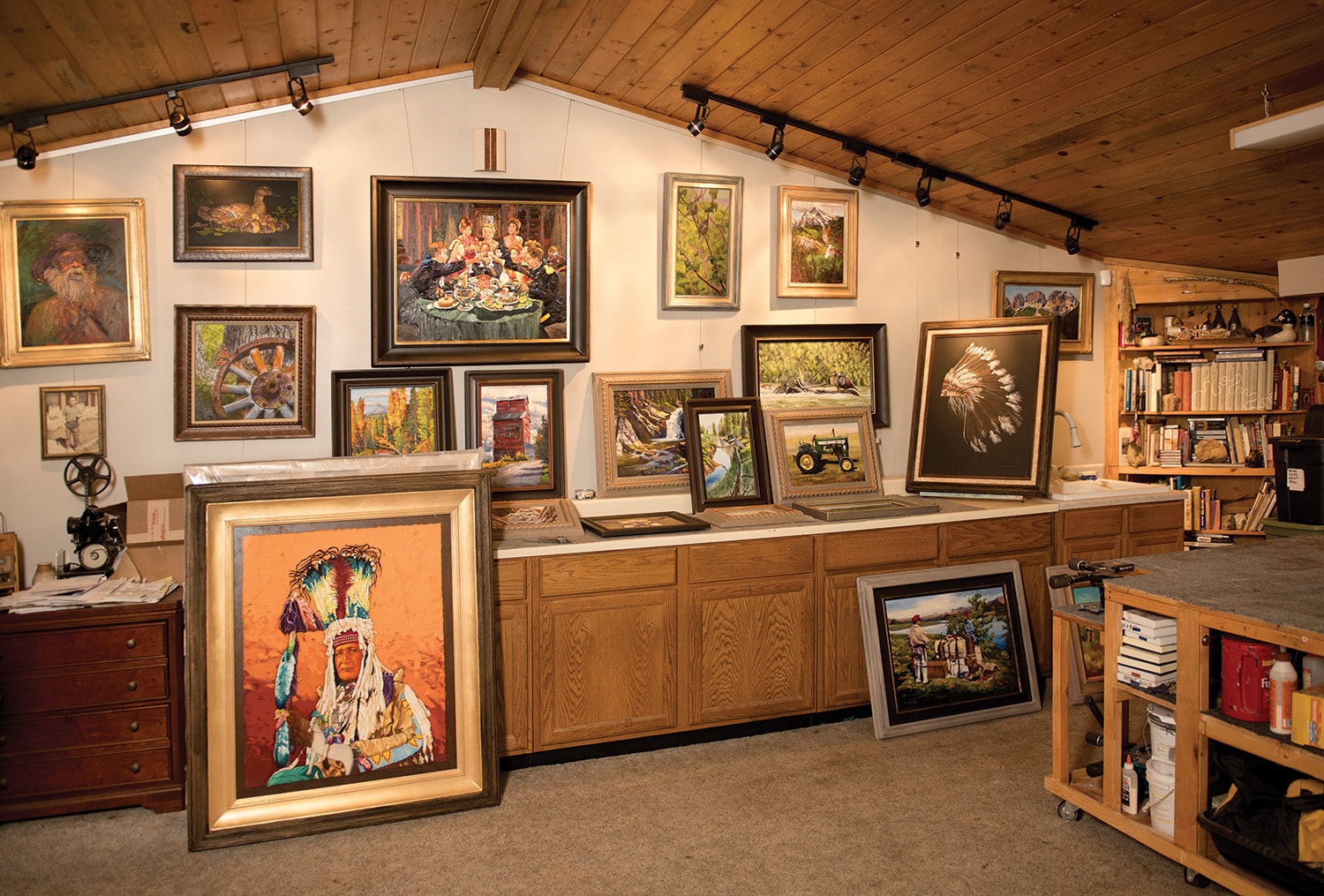 Works by both artists await shipment to galleries. 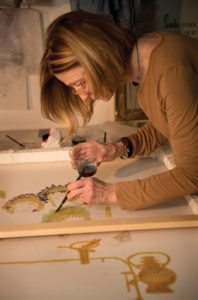 Echo carefully applies dye to one of her pieces. 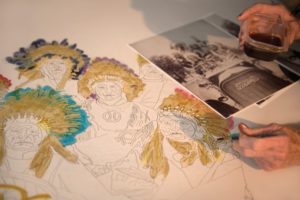 The batik artist uses photos for reference, even while dying. Although they are black and white images, she is able to imagine the vibrant colors.

During the process, while waiting for the dyes to dry, Echo often joins her husband, painter and mixed-media artist Ron Ukrainetz, in a more refined and organized studio upstairs, one that’s flooded with light from a variety of windows, with a deck overlooking a treed yard. “I just love the creation of the batik, so when I’m downstairs, I’m just so into the piece and colors,” Echo says. “I start out very organized, then I have 15 containers of mixed dye, and I can’t remember what color is in which, but I’m just so focused on the piece. But upstairs, Ron has it so organized; it’s a really professional space.” It’s in this studio that Echo performs the less messy tasks: adding gold leaf to her pieces, framing finished works, or hopping on the computer to check email.

The upstairs studio is where Ron often spends entire days creating his depictions of realistic wildlife, historic Western subject matter and landscapes. He paints with oils and also engraves polychromatic Claybord. They are processes and mediums that are different from Echo’s, but no less intricate, detailed and involved. “In wildlife art, people demanded accuracy, and I became a student of that,” Ron says. “I use my own photographic references and field sketches, and I carry it a step further, working on traditional black Claybord and white Claybord, and then using a glazing technique, I paint over it. They turn out very realistic.” 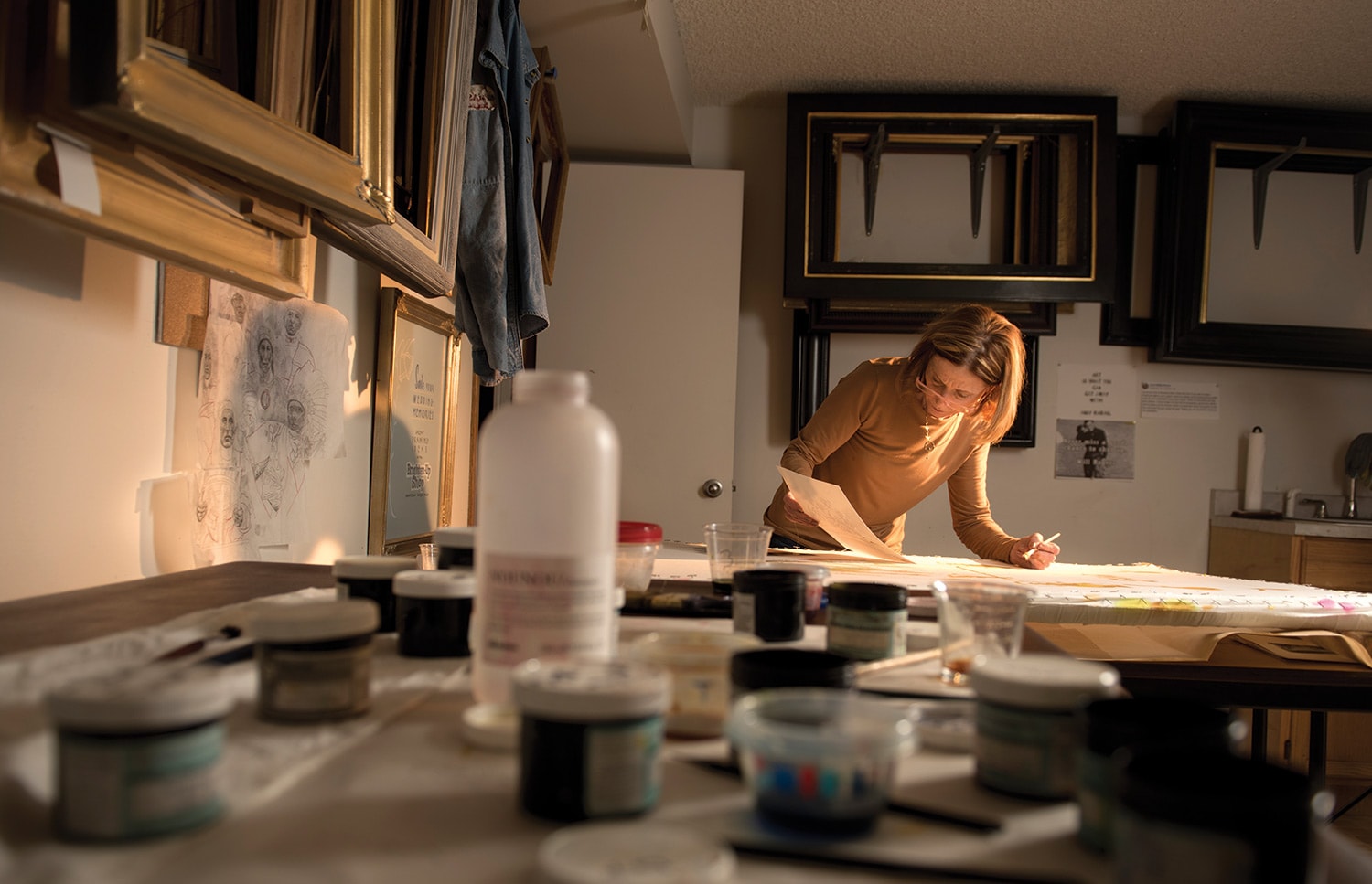 Echo’s downstairs studio is where she does the messy work.

One of his most recent pieces features a highly detailed kingfisher. “The whole background was painted in acrylic, then I engraved all the details of the kingfisher, the markings and values.” 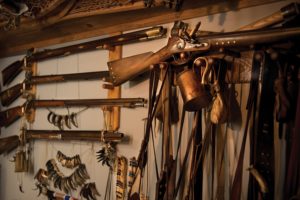 Ron collects antiques to use as historical references for his work. 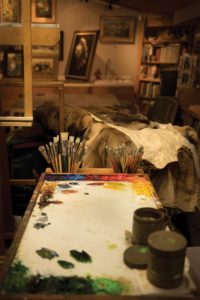 Ron’s palette and hides, used for reference, sit amongst his other books and collectibles in the upper library.

According to Echo, when Ron is in the engraving process, he delves in, often getting lost in his work in a similar manner to her batik. “He delves into it and can work all day,” Echo says. “I have to wax and dye, and the dye is wet and I have to wait for it to dry, so my work is off and on all day. I move between studios or vacuum between steps.”

“Echo has an ADD thing going on,” Ron says, laughing. “Batik works for her; she can work for two hours and then she cleans the floors. Our house is immaculate!”

It’s clear, not only from her passion for it but through her creations, that batik does indeed work for Echo. When she started dabbling in this medium 30 years ago, she was making cards. “It was something I could do with two kids and augment my income,” she recalls, explaining that she soon transitioned to larger fabric. “With each piece, I pushed it to a different level. I’d try to make it look like an oil painting. I just like the effects of the oil-paint look; I don’t want it to look like batik fabric. I like the detail, to push it to the limits.”

Much of her subject matter includes Native American figures in traditional clothing. The intricate work is punctuated with vibrant colors and detail, down to the contours of a feather or the bone structure of a face. “It is difficult,” she says. “I use small brushes, and it takes me a month or more to do a major piece.” 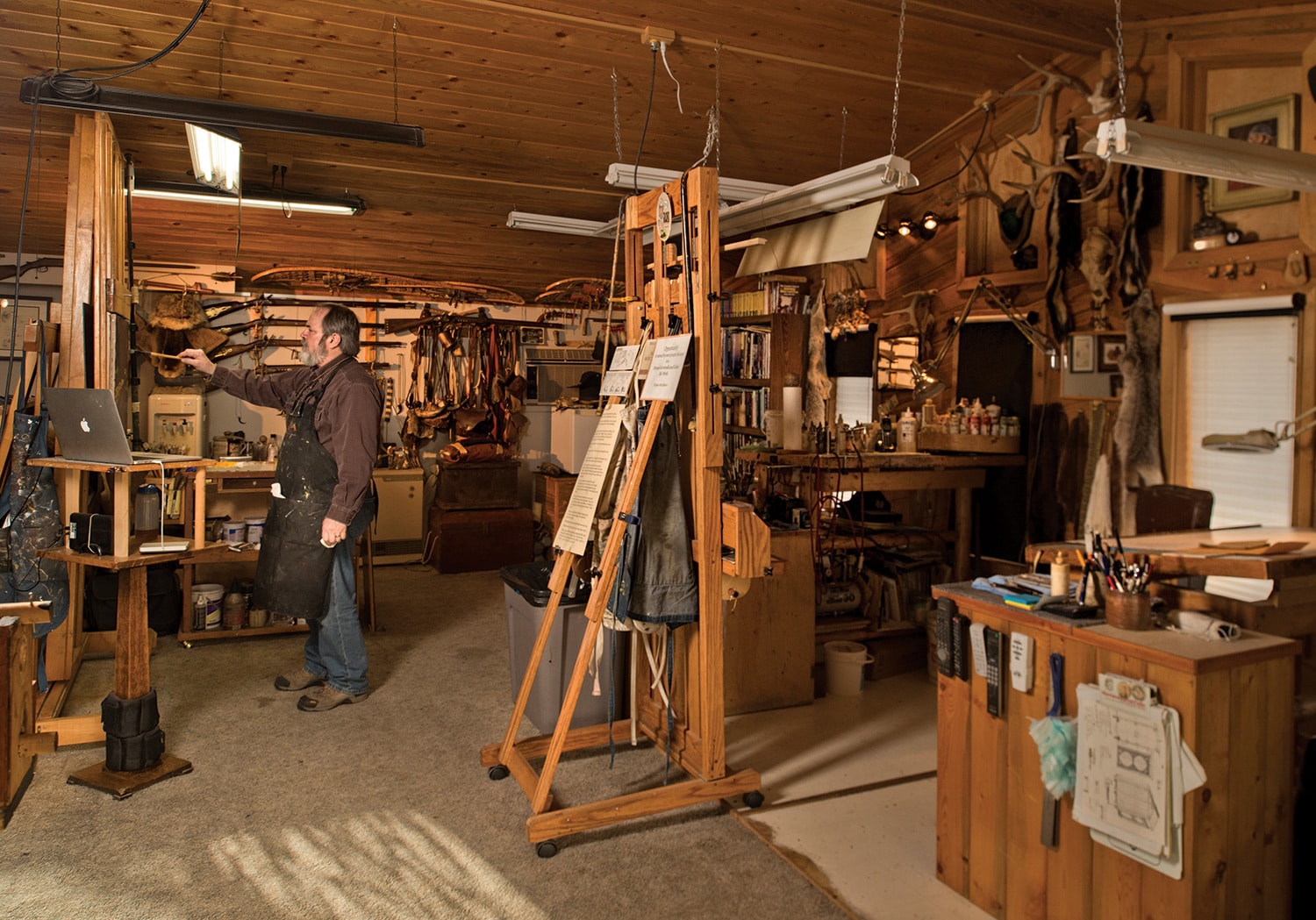 The artist at work in his self-described “man-cave/studio/workshop/library.”

Echo typically starts by examining a historical photo. “I can tell their story,” she says. “I like to give them a voice but the photos are in black and white. Then I love to push colors to the limit, influenced by Ron’s oils, I can do whatever I want with color.” 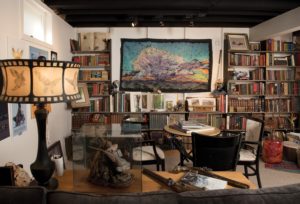 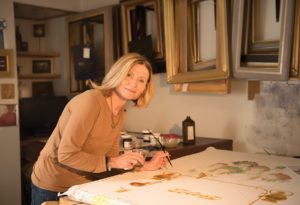 Echo applies dye to a batik, one step in a multi-layered process.

She first draws the piece on paper to get the different levels and values, especially in the face. After the details are down, she draws it onto the fabric. “I can’t even start thinking about the batik until the drawing is done,” she says. When it is done, out comes the wax and dye… and sometimes the vacuum during breaks. “There’s no going back once I start,” she adds.

Echo and Ron both spend a great deal of time on each individual creation. “Both of us have pieces that take us months to complete,” Ron says. “We don’t like to do prints, so for everything, we have to rely on originals.” And for these artists, their process is as original as the work they turn out, whether it’s created in Echo’s workhorse batik studio or the more refined and organized upstairs space. “We each have our own studio in a sense, but we really do kind of work together,” Ron says.