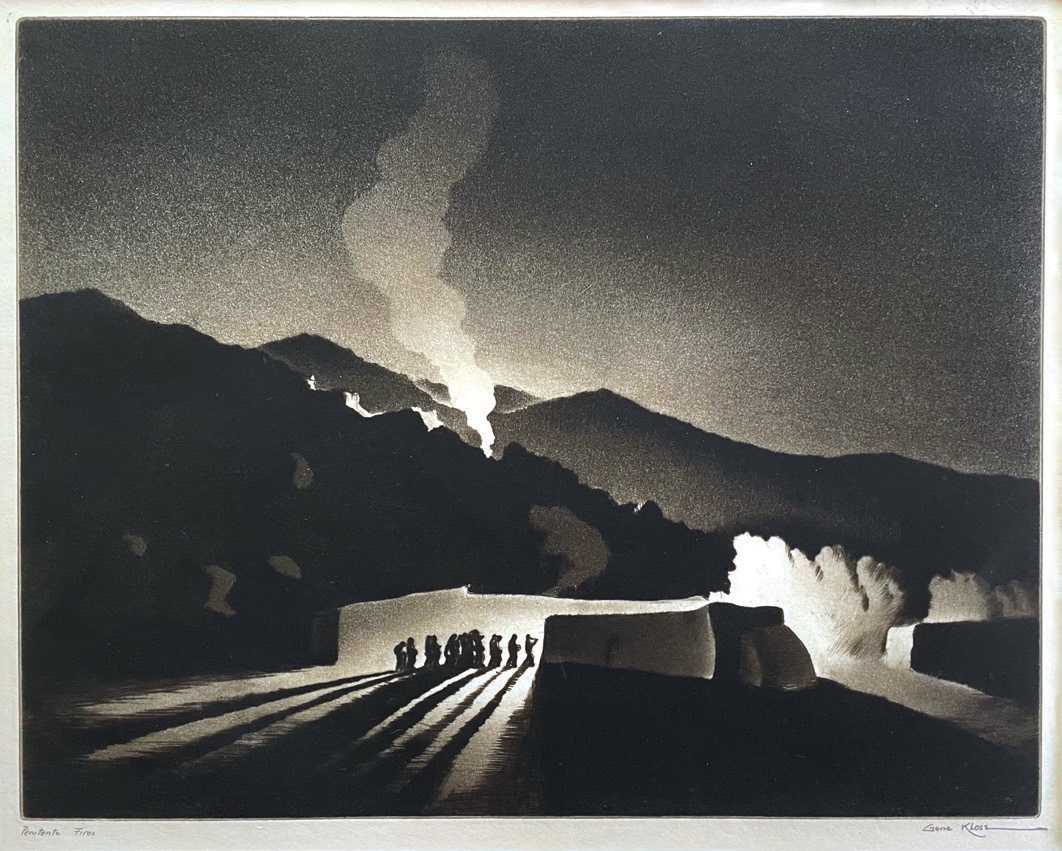 Gene Kloss was one of the major artists of the 20th century. She worked predominantly in three mediums — etching, oil, and watercolor — but is best known for her prints of New Mexican subjects.

Born Alice Geneva Glasier in 1903, she began signing her name as “Gene Kloss” after her marriage to Phillips Kloss in 1925. Her strong viewpoint was that she was not a “woman artist” but rather “a woman who was an artist.” Kloss was a meticulous craftswoman, completely dedicated to her primary medium, prints.

In 1925, she and Phillips began spending summers in Taos. There they immersed themselves in the Native American and Hispanic cultures, attending ceremonies and developing relationships with the Pueblo people. Her depictions of Native ceremonies offer viewers a window into the world of Northern New Mexico in the early 20th century.

This simple yet complex etching makes powerful use of light and dark to help the viewer understand the emotion and importance of the moment. The light from the fire contrasts dramatically with the velvet black darkness. The illumination of the trees, the rising plume of smoke beyond the hillside, and the striking backlit processional of worshipers create one of the most iconic scenes in American art. Shadows, created by a hidden light source — a favorite technique of hers — make the worshipers the primary focus.

It is an iconic image. The brilliant design, the powerful use of the firelight and darkness, and the mystery of the silhouetted worshippers all work together to create a singular scene, one of the most coveted of her nearly 650 prints. Understandably, the etching was among a group that was sent in 1941 to hang in the White House of President Franklin D. Roosevelt.

Kloss deserved the honor of becoming the first woman inducted into the National Academy of Design as a printmaker. Her work hangs in the Metropolitan Museum of Art, the Smithsonian Institution, the Carnegie Institute, the Fine Arts Museums of San Francisco, the Los Angeles County Museum of Art, the Library of Congress, and the National Academy of Design. The most important repository of her work is in the Sangre de Cristo Arts Center in Pueblo, Colorado.

Kloss died in Taos on June 24, 1995. The two-volume catalog raisonné of her work, Gene Kloss, An American Printmaker (2009), gives us a sweeping overview of her remarkable career.

During her 70-year career, Kloss personally “pulled” and signed an estimated 18,000 prints, and many continue to come up for sale regularly in galleries and auctions, providing beginning and veteran collectors alike the opportunity to enjoy an original creation by a true master. The art world remains indebted to this virtuoso of the West, an artist who was beyond remarkable.