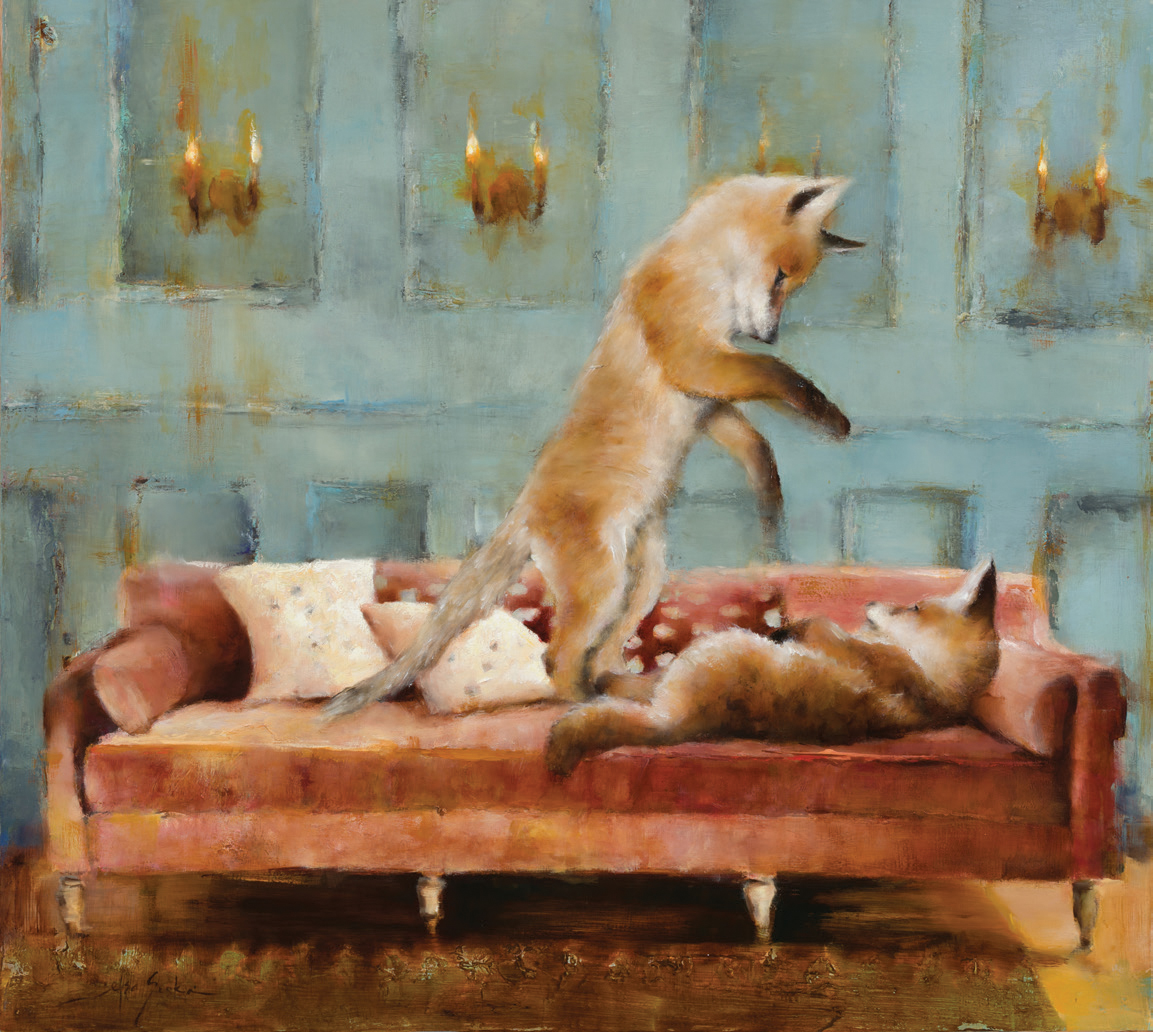 Elsa Sroka “never grew up around cows,” she says of her Fort Collins, Colorado, childhood. More and more these days, however, her rocketing reputation as a painter owes credit to what she calls her “unconventional series of cows,” which include bovines reclining serenely on a velvety settee in a drawing-room hung with art; pensively resting side by side in a rowboat; gazing inquisitively through a fog-streaked window; and reposing majestically in a giant nest, a plump bluebird perched nearby. 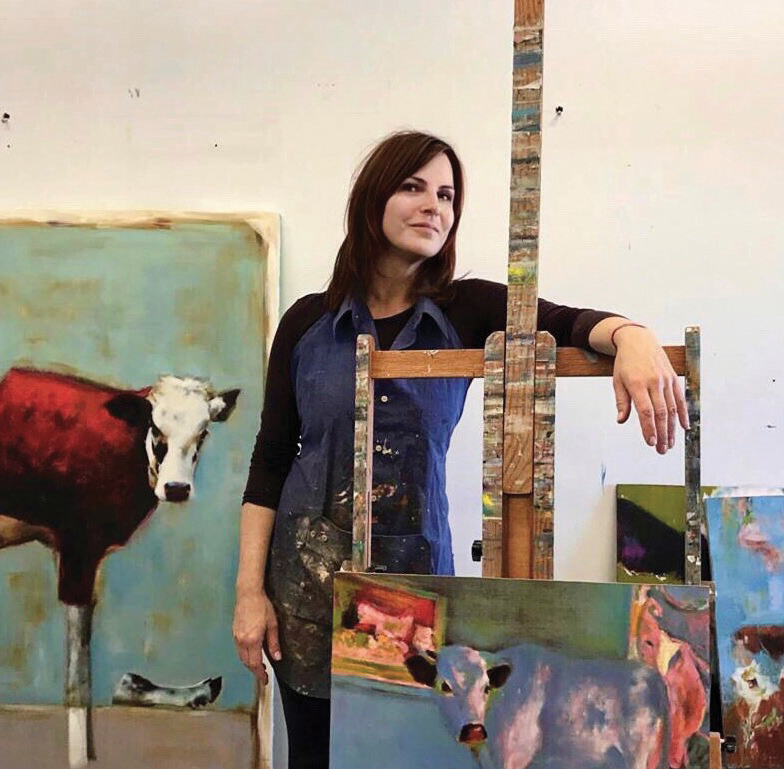 Elevated from mundane barnyard or pasture settings, Sroka’s subjects have won her not only top gallery representation but also recognition from leading shows. This January marked her fifth consecutive appearance in the Coors Western Art Exhibit & Sale in Denver, Colorado, and for the first time, she is currently part of the roster of women artists selected for the prestigious Cowgirl Up! show at the Desert Caballeros Western Museum in Wickenburg, Arizona. Her work has even recently grown to larger-than-life scale, with the debut last October of a three-story-tall ceramic-tile mural she designed for the Spur at Iliff Station Apartments in Aurora, Colorado — portraying one cow balancing atop another that’s standing hoof-deep in an inflatable pool. 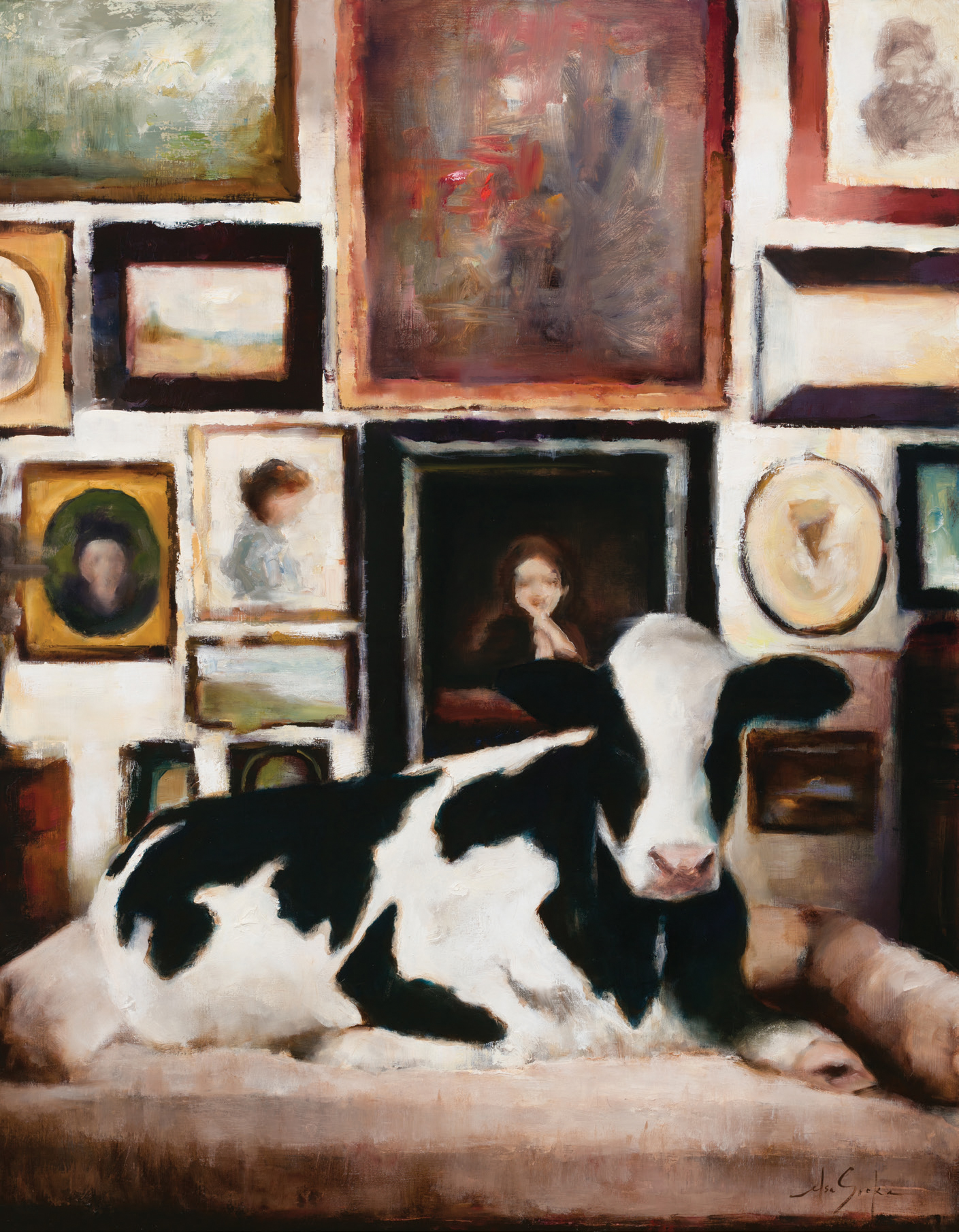 “When you’re doing what you love, you can feel it in your paintings,” says Sroka of the joie-de-vivre her images evoke. So it may come as a surprise to learn that, despite the skill and brio evident in her work, 55-year-old Sroka only seriously picked up a paintbrush around a decade ago. Sure, she has fond memories of coloring around the kitchen table with her three sisters and two brothers. But her principal adult creative outlet was working as a hairstylist until, seeking another form of self-expression, she began taking classes at the Art Students League of Denver. “I knew it was sitting in there somewhere,” she says of her ability.

Testing the creative potential of charcoals, inks, watercolors, and acrylics, she eventually found her medium in oils, attracted to their “satisfying richness in texture and color.” Then came her accidental cow phase. “We were supposed to bring a subject to paint in class,” she says. “I painted a cow face. I thought it was bad, and I scraped it off.” That “cool, smeary” cow face was a breakthrough, evolving into the first series of intriguingly blurred cow portraits that she called Through the Window. 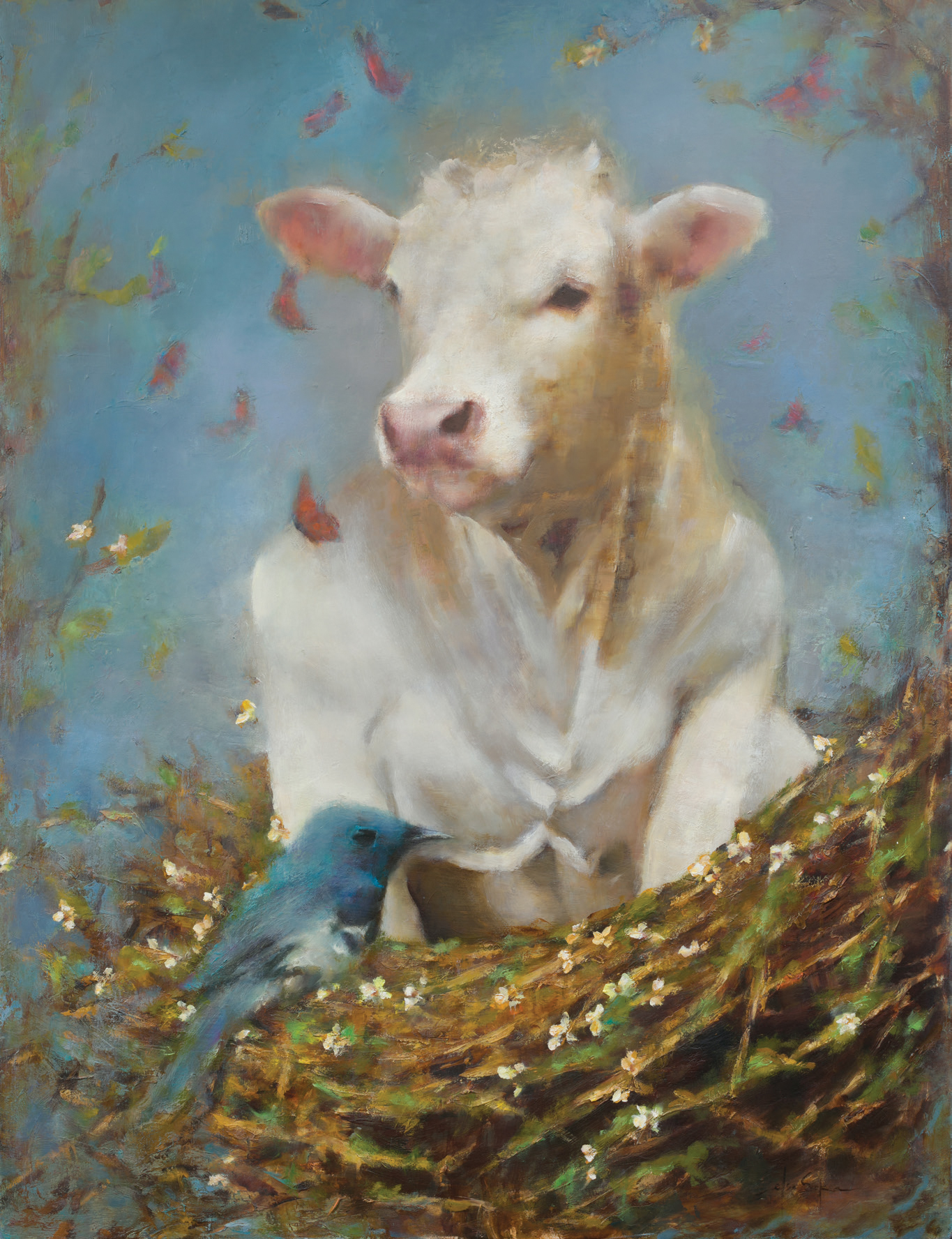 As Sroka’s self-assurance has grown, her compositions have become more complex and “definitely more thought out,” she says. Each painting is “a time-consuming process,” planned using cutouts of reference materials followed by “a lot of eyeballing and freehand work to find and commit to a composition. Fantasy needs a lot of planning.” Going forward, she adds, “I want to take more time to experiment. I want to play more, to do it for my own pleasure.”

Sroka’s works are included Cowgirl Up! at the Desert Caballeros Western Museum in Wickenburg, Arizona, through July 26. Her works are available through Sorrel Sky Gallery in Durango, Colorado, and Santa Fe, New Mexico, with a solo show opening at the latter location on July 3.