When California announced the order to self-isolate because of coronavirus in mid-March, Jim Wodark watched his spring and summer lineup of shows and painting events evaporate. He worried about his career. Would anyone in this strange and unsettling time still be buying art?

Then he had an idea: He would use the enforced retreat at his Orange County home, with his wife and three grown kids, as an intensive period of artistic self-challenge and growth. Part of this challenge would be to create one new small painting every day. 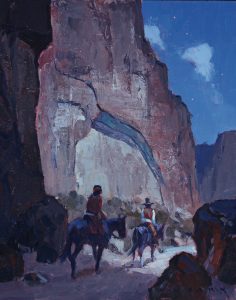 For the first week, he sailed through this exercise, inspired and excited about the creative possibilities. Then, his son returned home from college spring vacation — on the last day anyone was permitted to enter the U.S. after being in Spain. The artist immediately got “sick as a dog.” His condition mirrored many COVID-19 symptoms, but he was denied testing because his fever wasn’t high enough. For two weeks, he suffered from a dry cough, fever, aches, pains, and utter exhaustion before coming out on the other side. His wife and one of his daughters were sick as well, although with milder symptoms. 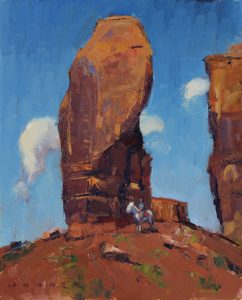 Finally, back on his feet, Wodark resumed his self-assigned challenge. But after another month or so, he started running out of ideas and motivation. Then came an unexpected gift. “What’s neat about when you commit to something, stuff starts showing up to help get you to your goal,” he says. Larry Moore, an artist, friend, and the author of Fishing for Elephants, began a Facebook group he calls “What If University,” where he offers a novel creative suggestion each week to get artists’ brains tilting in new directions. For example, what if you paint something representationally but with the least information possible to still identify the subject? Wodark applied the idea to a small nocturn of a horse and rider in front of a barn. While working on a larger version, he realized he’d included too many details. So he scraped off some paint and reworked it. “I thought, wow that’s amazing, I didn’t need all that information in the background,” he says. 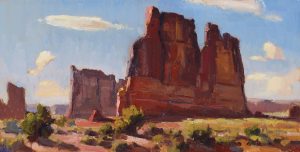 For many of the exercises, Wodark tapes off a board into small squares and paints inside each one. “You get into a creative state, which is a really fun place to be,” he says. “I never took a ton of art classes, so this was a chance to experiment, with the freedom to make mistakes.”

As summer rolled on and coronavirus restrictions remained in place, the 61-year-old artist has kept up his daily painting exercises while also occasionally venturing out into the landscapes that fuel his art. Although Wodark lives a short drive from the Pacific Ocean and has long enjoyed rendering coastal scenes, harbors, and even cityscapes, these days, his imagination is sparked by the Southwest.

In Monument Rising, a rocky foreground hillside and winding trail lead toward the East Mitten landform in Monument Valley, with the mammoth rock formation silhouetted against a pale-yellow sky. The painting earned second place out of more than 3,000 entries in the May 2020 BoldBrush Painting Competition hosted by Fine Art Studio Online. Other awards the artist has received over the years include best of show and grand prize at regional and national exhibitions. 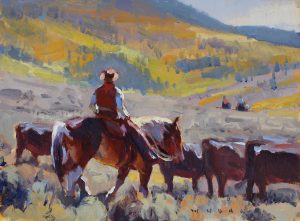 “Jim uses strategically designed canvasses to bring to life nostalgic Western themes,” says Nicholas Reti, owner of Oh Be Joyful Gallery in Crested Butte, Colorado. “And he can paint the soul of a sagebrush.”

Wodark’s artistic inclination and love of the outdoors both began in boyhood. Growing up in Colorado, close to the Flatirons near Boulder, he spent virtually every summer day outside, exploring his corner of the natural world, floating on a reservoir-fed stream, and camping and fishing in the mountains with his father or the Boy Scouts.

His parents were both artistic. His mother earned a fine art degree but forewent an art career to raise four kids. His father drew as a child and still had those drawings when Jim came along, inspiring his young son to try and copy them in precise detail. 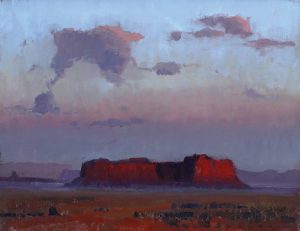 While both parents encouraged Wodark’s interest in art, his time in college found him preoccupied with  non-academic interests — “until my girlfriend broke up with me, and I got my brain back,” he says, smiling. By then, however, the pursuit of an art degree would have entailed changing schools and a couple of additional years.

He graduated from the University of Northern Colorado with a marketing and business degree, skills he could apply to any vocation — which he did, after seriously pondering whether he was or was not an artist. He realized he was, quit his job at an athletic club, and turned his drawing skills and sense of humor to freelance cartooning, his first creative profession. 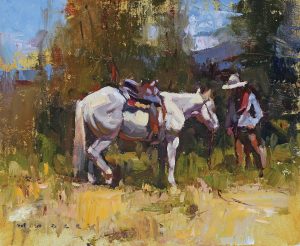 For 15 years, Wodark designed and drew colorful cartoon maps of college campuses, created t-shirt designs, and produced weekly one-panel comic strips that ran in several college newspapers; his most successful was called Chicken Stick Bug Face. The discipline required for such work has served him well in his fine art career. “Whether I was inspired or not, I had to come up with something interesting or funny,” he says. “As Chuck Close put it: ‘Inspiration is for amateurs.’ I realized it’s nice when I’m inspired, but it’s not necessary.” At the same time, his drawing skills were continually honed by filling maps with 3-D images of buildings and landmarks, as if seen from above. “I love to draw, and cartooning is just drawing and drawing,” he says.

Cartooning also means creating characters and designs straight from one’s imagination without references. These days, Wodark applies this proficiency to painting as he removes or rearranges elements, composing the image for the greatest visual interest. 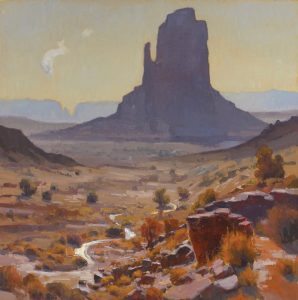 Jane Bell Meyer, owner of Illume Gallery of Fine Art in Saint George, Utah, describes his work as a “reflection of himself: a fascinating storyteller in his life and art. He leaves in the interesting detail without giving away the ending of the story, letting us add in our own experiences. Through light and shadow, shapes and atmosphere, he sets the mood in each of his intriguing paintings. I’m fortunate to represent him and to own one of his ‘stories in a painting’ myself.”

In the early 1990s, Wodark moved from Colorado to Southern California. A few years later, he signed up for a plein air oil painting class with Laguna Beach-based artist John Eagle. Although he’d been painting in acrylics and watercolor while cartooning, working on location in oils opened a door into full-time fine art. When Wodark’s first child was born, he and his wife agreed he would be an at-home father and artist, an arrangement that continued through the births and childhoods of their son and twin daughters. The experience created a richness in his relationship with his children, while allowing him to develop his art and career.

Today, still producing a small painting a day, exploring new approaches through Moore’s suggestions, and spending time in extraordinary landscapes, Wodark holds to the vision that compelled him to begin painting more than 30 years ago: “To bring beauty into the world and into people’s lives.”

Conveying his deep and wonder-filled experience of beauty — the way evening light hits a rock formation or a tree that stands out against its background — is not only a daily self-challenge, but a lifelong one as well.

“I’m always looking to get to the next level, trying to create a masterpiece,” Wodark says. “That’s a pretty big word, and I don’t think I’m there yet, but it gives me space from where I am and pulls me forward into that.”