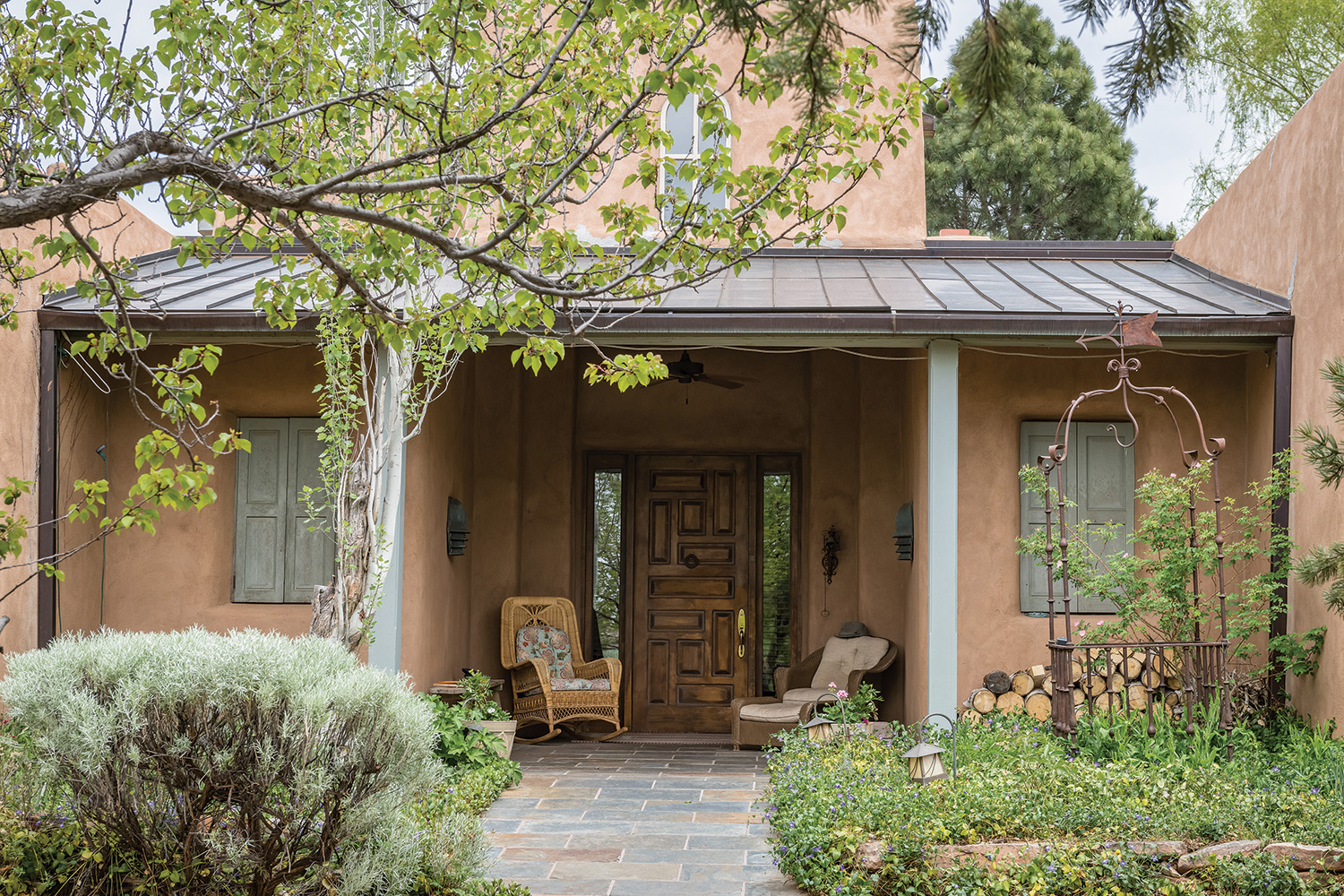 14 Sep At Home With Forrest Fenn

PEOPLE MAY DOUBT, BUT I’VE SEEN IT.

First of all, the chest itself is a treasure, a cast-bronze, Romanesque lockbox, dating to about 1150. Second, it’s filled with items only a lifelong collector, ardent archeologist, and lover of beautiful things with a mischievous gleam in his eye could have thought to amass. Antique jewelry and fetishes, gold coins and heavy gold nuggets, uncut emeralds, rubies, and diamonds all lie jumbled in a glorious heap, as if in a N.C. Wyeth illustration for Treasure Island. 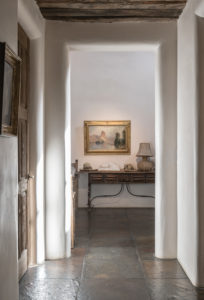 Fenn’s home is filled with evidence of a lifelong passion for collecting, including this work by painter Thomas Moran. 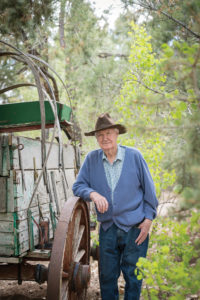 War hero, aviator, gallerist, author, archeologist, and collector, Fenn might be best known for launching a massive treasure hunt when he decided to place a medieval lock box filled with jewels, gold nuggets, and artifacts “in the mountains north of Santa Fe,” then publishing a poem with the clues to find it. This 1880 Army munitions wagon sits on the Santa Fe Trail, which runs through his property.

I had a chance to run my fingers through these riches on two occasions a few years apart; I’d seen the collection grow and take shape.

When Forrest Fenn first showed me this treasure chest — after letting me hold Sitting Bull’s peace pipe, while describing how he’d authenticated it — I wasn’t even terribly surprised that he thought it fun to leave these riches out for anyone to claim. 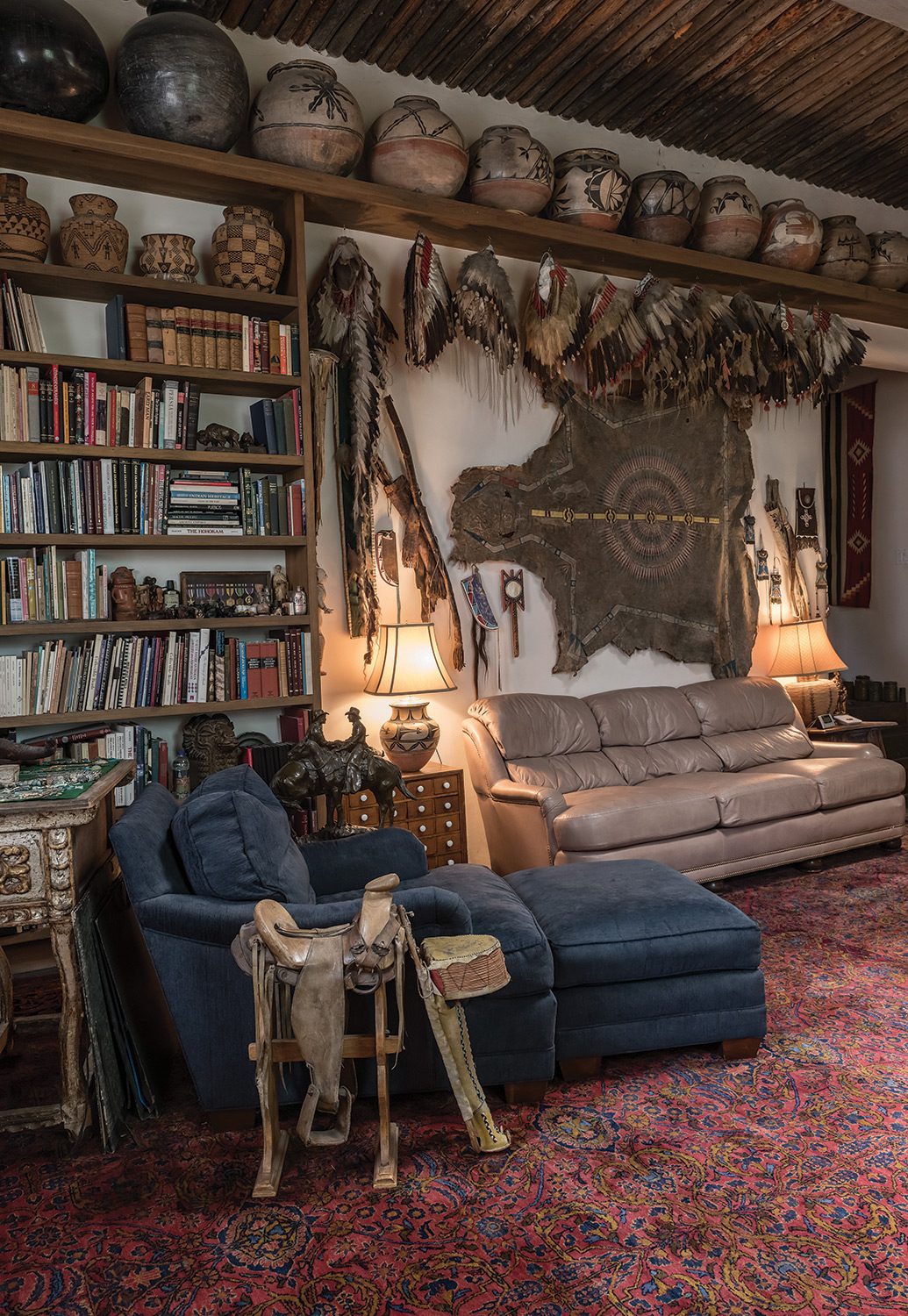 Fenn has authored a dozen books — mostly monographs of New Mexico artists and a memoir trilogy — from his study in the art-filled adobe home he shares with his wife, Peggy.

At the time, Fenn was 80 and had outlived a dire cancer diagnosis. He was a self-educated archeologist; I’d visited the San Lazaro Pueblo, listed on the National Register of Historic Places, that Fenn owned south of Santa Fe. Estimated to have been continuously inhabited for more than 400 years, it will be years before all of its rooms are excavated. I’d seen shards of ancient pottery scattered across the site, and I’d admired the vast number of items Fenn had excavated and carefully catalogued. 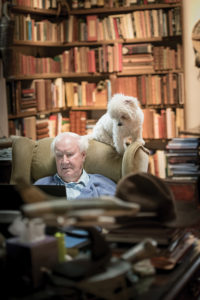 Fenn’s interests, and his dog Willie, are on full display in his workspace. Collectible books; medals for valor juxtaposed with small bronzes, Christmas gifts from Dan Ostermiller; Native American artifacts; fore-edge painted books with meticulous artworks, viewable only when the pages align correctly, all captivate him. 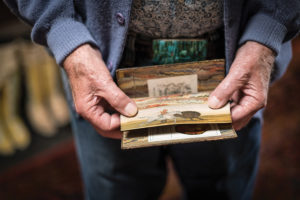 The sheer breadth of Fenn’s collection is astounding, and displayed with an artist’s sense of color, composition, and scale.

Tellingly, the first time I visited his home, he ignored paintings by such Santa Fe and Taos luminaries as Joseph Henry Sharp and Nicolai Fechin to draw my attention to bronze vessels with screw-on lids. He bargained with the owner of a foundry to teach him casting skills and designed each vessel with artwork and raised lettering, for example, a dragonfly and the Einstein quote “Imagination is better than knowledge.” He also inserted a copy of his autobiography in miniscule type. So far, he has buried eight such vessels. 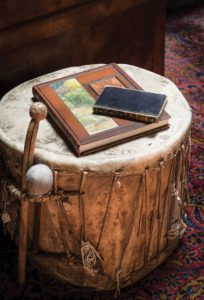 Clearly, Fenn was fascinated by time capsules, discovery, and — as in the title of his memoir — The Thrill of the Chase.

Still, actually leaving a $1 million treasure out in the world for anyone to claim is a radical thing to do. But Fenn, in spite of his “I’m-just-a-Central-Texas-kid-who-lived-by-the-cemetery” demeanor, is, in his way, a radical. 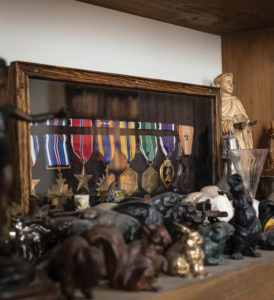 Fenn grew up the middle child of a school principal. It wasn’t always easy, he recalls. “One day, my father gave me a spanking for running across some stupid desks, then that night he gave me a spanking because I got a spanking at school.” By Fenn’s account, school was less about academics (“I prayed for Ds in all my classes, but no one ever listened”) and more of an opportunity to make and sell marbles — which he did under his desk, perfecting a one-handed technique of sanding pieces of agate, which he collected on summer trips to West Yellowstone, in Montana, to the perfect size and roundness. He sold the marbles for a dime, which bought him his favorite meal, a bag of Fritos and a Dr. Pepper.

“I could always talk a couple of guys into playing a game of marbles during recess,” he writes in The Thrill of the Chase. “The more guys played marbles with me, the more marbles I could sell, and sometimes I could win back a marble that I sold a few minutes before. I learned more about life during recess than I did in school.” 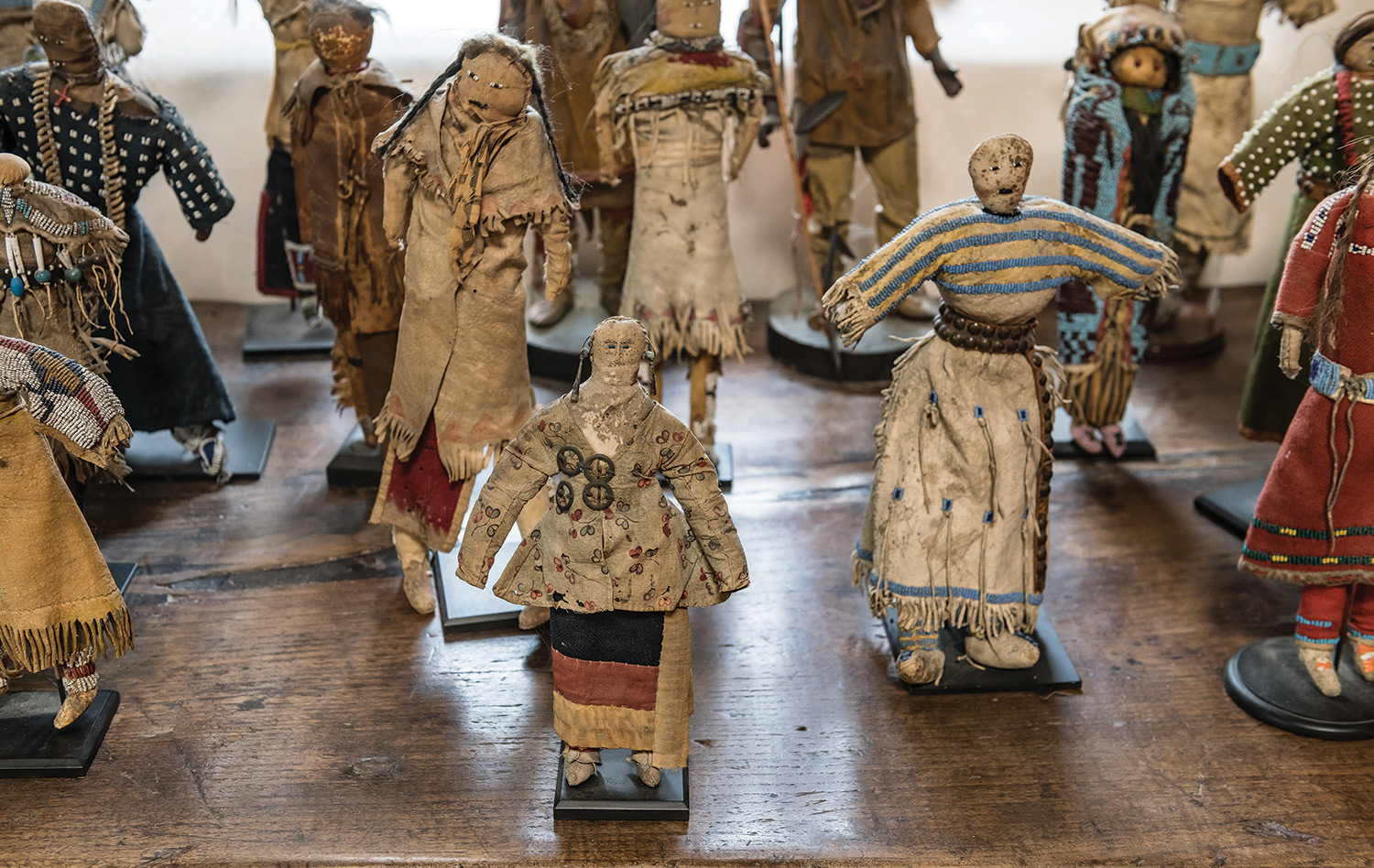 Clearly this experience presaged his career as an art dealer. Unlike the game of marbles, he did not know Santa Fe or the world of fine art when he arrived in New Mexico in 1972 with his wife and daughters. He’d been a fighter pilot in the U.S. Air Force. He chose Santa Fe “because it was a laid-back town. In Vietnam, I had flown 328 combat missions in 348 days and was shot down twice. While lying in the Laotian jungle, hoping to be rescued, I had time to think. I knew I was not going to wear a coat and tie, but I needed to make a living. I figured I could do that in Santa Fe.” 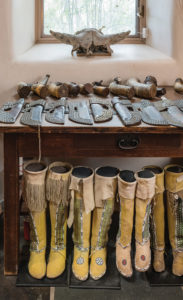 In each category, Fenn owns many items, such as Montana Blackfeet tacked knife sheaths, circa 1870.

It’s hard to comprehend that Santa Fe didn’t spawn a gallery culture until the 1970s, but when Fenn arrived it was nascent. Within a few years, he had established himself as a gallerist near the base of Canyon Road in a traditional 17-room adobe with an outdoor sculpture garden that charmed the coastal elite. He hosted Jackie Kennedy in his guest house. He sold a major Charlie Russell bronze to Steven Spielberg. He became good friends with celebrities, writers, politicians, and wealthy collectors, and he met everyone who passed through Santa Fe in the 1970s and ’80s. 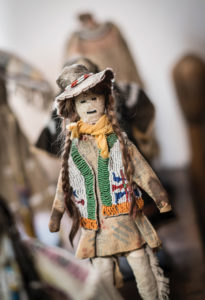 Fenn’s study in his Santa Fe home represents a snapshot of this extraordinary lifelong quest and is a testament to his eye for beauty, proportion, and quality. New Mexican pottery, dating from 1840 to 1920, lines the upper shelves, one-of-a-kind books fill floor-to-ceiling shelves, Native American artifacts — beaded items, painted hides — adorn one end of the room. For years, Fenn collected Plains Indian dolls, each delicate yet somehow beautifully preserved, clad in brain-tanned, beaded garments, and human hair. Oil paintings throughout the home speak to his decades as a leading gallerist and of his particular interest in Joseph Henry Sharp, Nicolai Fechin, Leon Gaspard, and Eric Sloane; he has authored monographs on all of them.

In his writing — nine books on art and antiquities, as well as an autobiographical trilogy — Fenn’s style prompts comparisons to Mark Twain in his dry aphorisms: “Two people can keep a secret if one of them is dead,” he writes. “Any part of some is better than no part of any.” 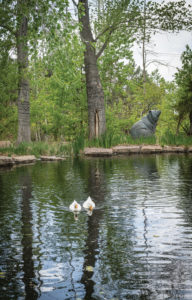 The lifesized bear sculpture by Dan Ostermiller provides a focal point for the Fenns’ quiet pond.

Fenn never lost his own passion for collecting during the Fenn Galleries years. But simply paying cash was never his style. “In 1972,” he recalls, “I got my first significant art piece, a Joseph Sharp Indian painting. I traded $500 and three, old, beat-up, ’73-model Winchester rifles for it. Wherever it is now, it’s worth a lot more.” 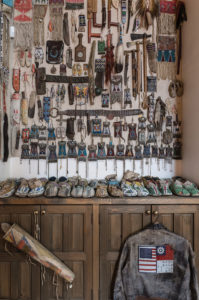 The sheer breadth of Fenn’s collection is astounding, and displayed with an artist’s sense of color, composition, and scale.

All these threads led to the ultimate collection: the treasure. Clues to its location, “somewhere north of Santa Fe,” are found in the untitled poem at the end of The Thrill of the Chase. “Begin it where the warm waters halt” and “put in below the house of Brown” have launched some 350,000 seekers, spawned an e-book of its own, The Fenn Treasure: How and Where to Find It, by Chris Volkay and, tragically, led four people to their deaths. This is a source of great distress to the 87-year-old, who attempts to respond to hundreds of emails a day from journalists and hunters without revealing further clues. He has repeatedly stressed that he carried the goods in two trips from his car, alone, while in his 80s, and certainly not up a cliff, under water, or off a precipice.

While the treasure chest attracts seekers, skeptics, believers, journalists (and in a few cases, stalkers), Fenn insists he didn’t do it for the attention. He did it to get people outdoors, interacting with family and friends, and to share the “thrill of the chase.”