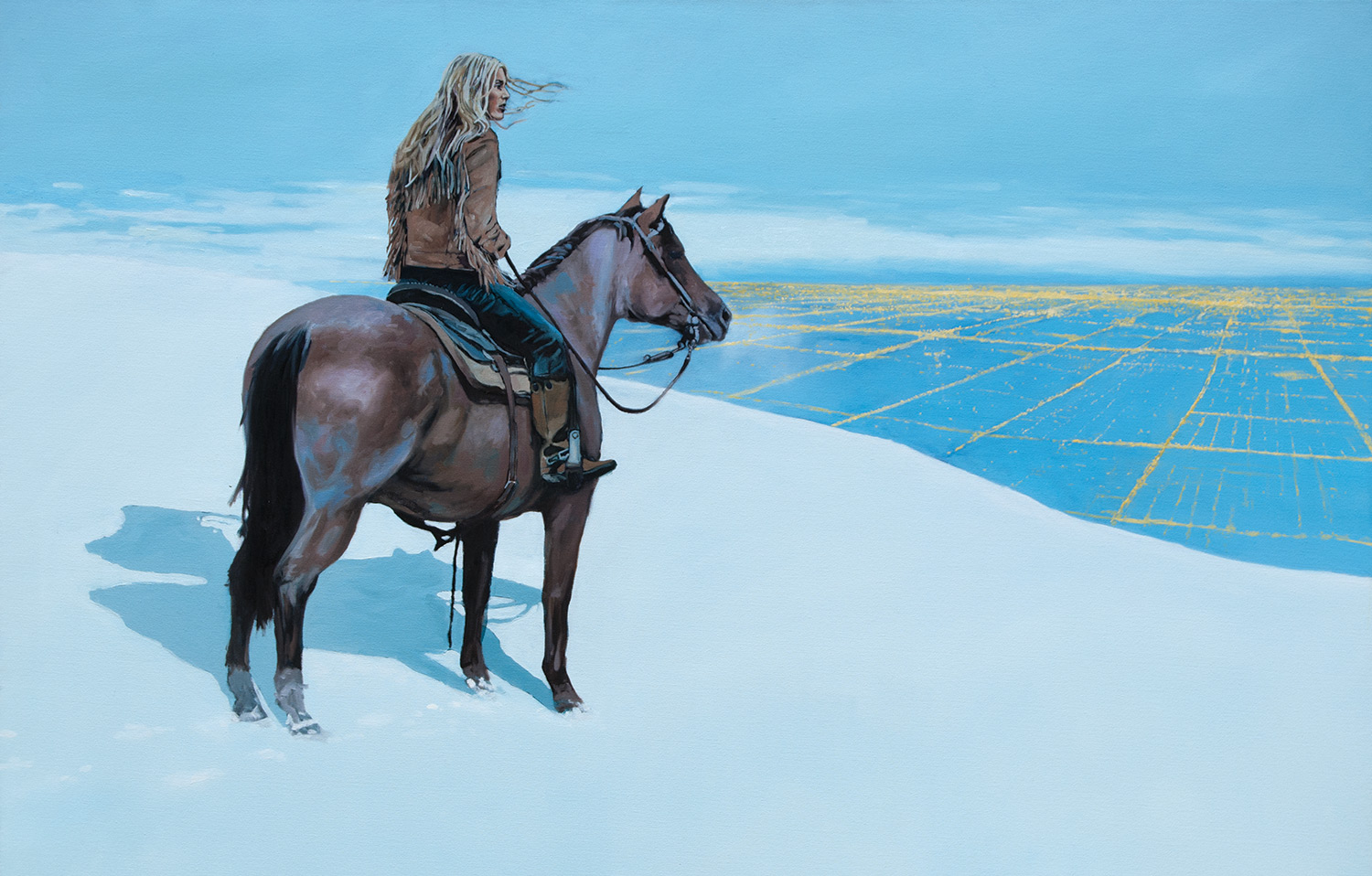 Using hyper-realism Tracy Stuckey’s narratives evoke a mythical West. His characters, a mixture of slick billboard models and pulp fiction storylines, speak to the way the West is portrayed and misunderstood. These scenarios, like a funhouse mirror, allow us to examine our own absurdities.

“There are a few different ways I come up with ideas,” Stuckey says. “They’re built out of stories I read, or the news. Or they may even be based on song lyrics. Something might spur an image which becomes one element of a painting, the one element I’m interested in visually, and I built the rest of the painting from that.” 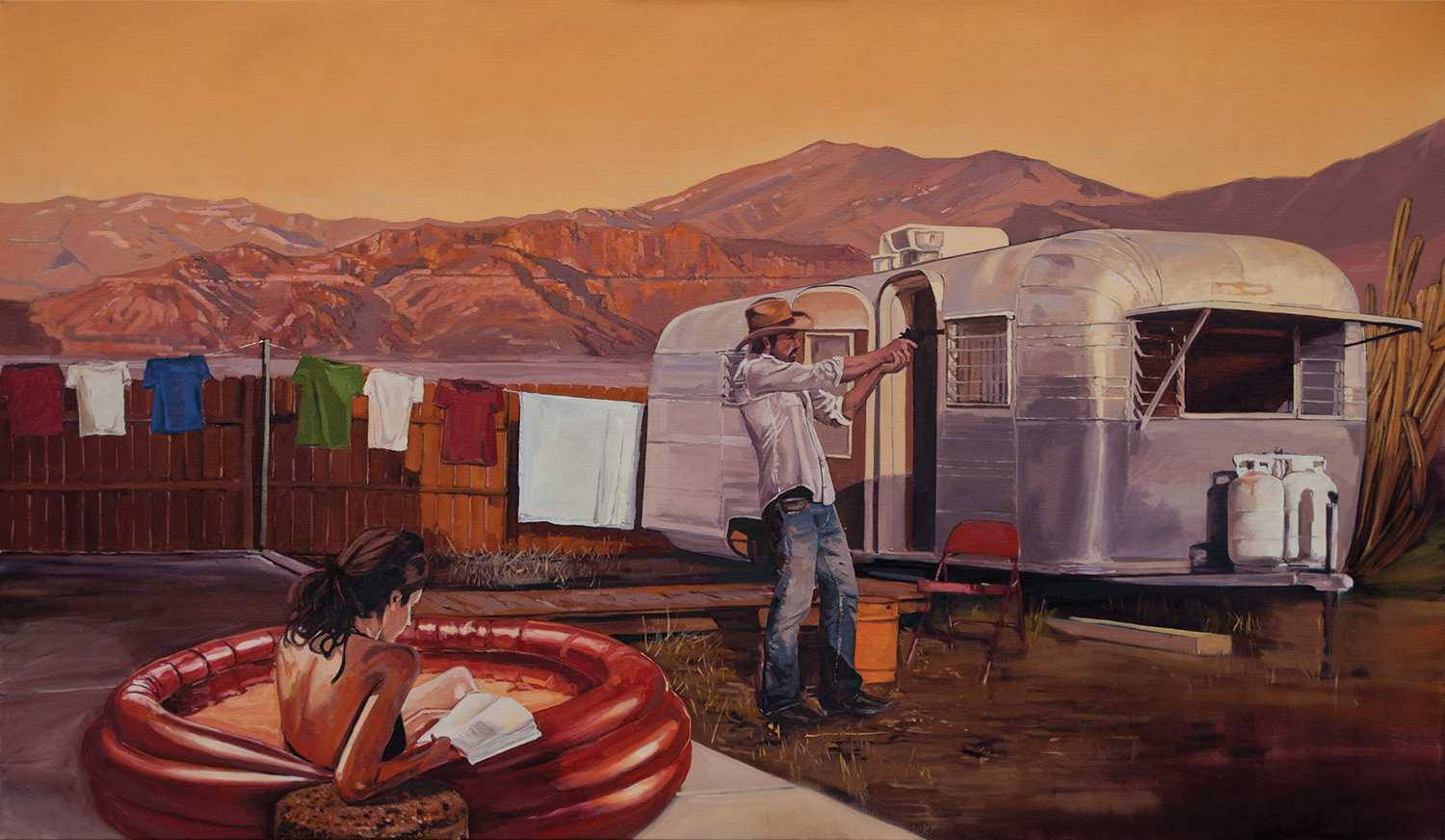 A steady source of inspiration comes from iconic 1940s and ’50s covers of pulp Western novels. “They’re formulaic in structure and super Western. What I’m interested in is how romanticized the Old West has become and all the complexities within that. We do exaggerate it, and it’s very emblematic of us as Americans. But when you study the history, a lot of it is completely false.”

Although Western expansion was a small part of American history, it interests Stuckey because it’s something we hold onto as part of our identity, and those same images are still used today. 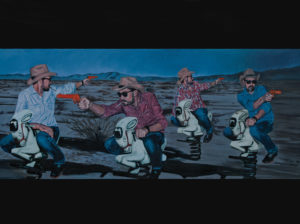 “I grew up in Florida, and when I came out West it was somewhat different than what I’d imagined,” he says. “I’m the last generation that grew up with the Marlboro man — which was a very appealing ad campaign — and we still hold onto some of that. The ideas, the look, even modern-day fashion designers continually come out with a line of clothing … driven by Western looks, like Ralph Lauren; [it’s] using the image of rugged individualism to sell a set of clothes, film, or other products.”

By taking that complex idea and pushing it to see how far we’ve come as a culture and how much it’s been exaggerated, Stuckey puts his finger on the line between pop culture and fine art. Although his paintings are meant to be comical and ironic, it still hits home.

“The people that occupy my paintings are usually playing dress up,” he says. “Playing cowboys and Indians, essentially, playing out this old idea as adults. It’s complex for me, because I do see the fictionalization of it all, but sometimes I’m using those same tools. Coming out West, and having ideas informed by fiction and advertising, I was taken aback when I realized it’s not that way here. I started to dig in, to understand the historical accounts of what really happened. There’s a real danger in believing your own myths.” 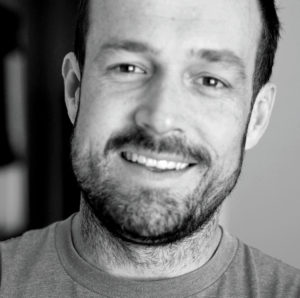 for five years. While in West Virginia, he began his investigation into what it meant to live in the West. “As I started approaching the fourth or fifth year, I began to question what I was doing,” he says. “‘What is this? If you strip away the West is there something else there?’ But now that I’m back out West, in Colorado, I feel like there’s still a lot for me to explore. I feel invested, while still trying to keep an outsider’s mentality.”