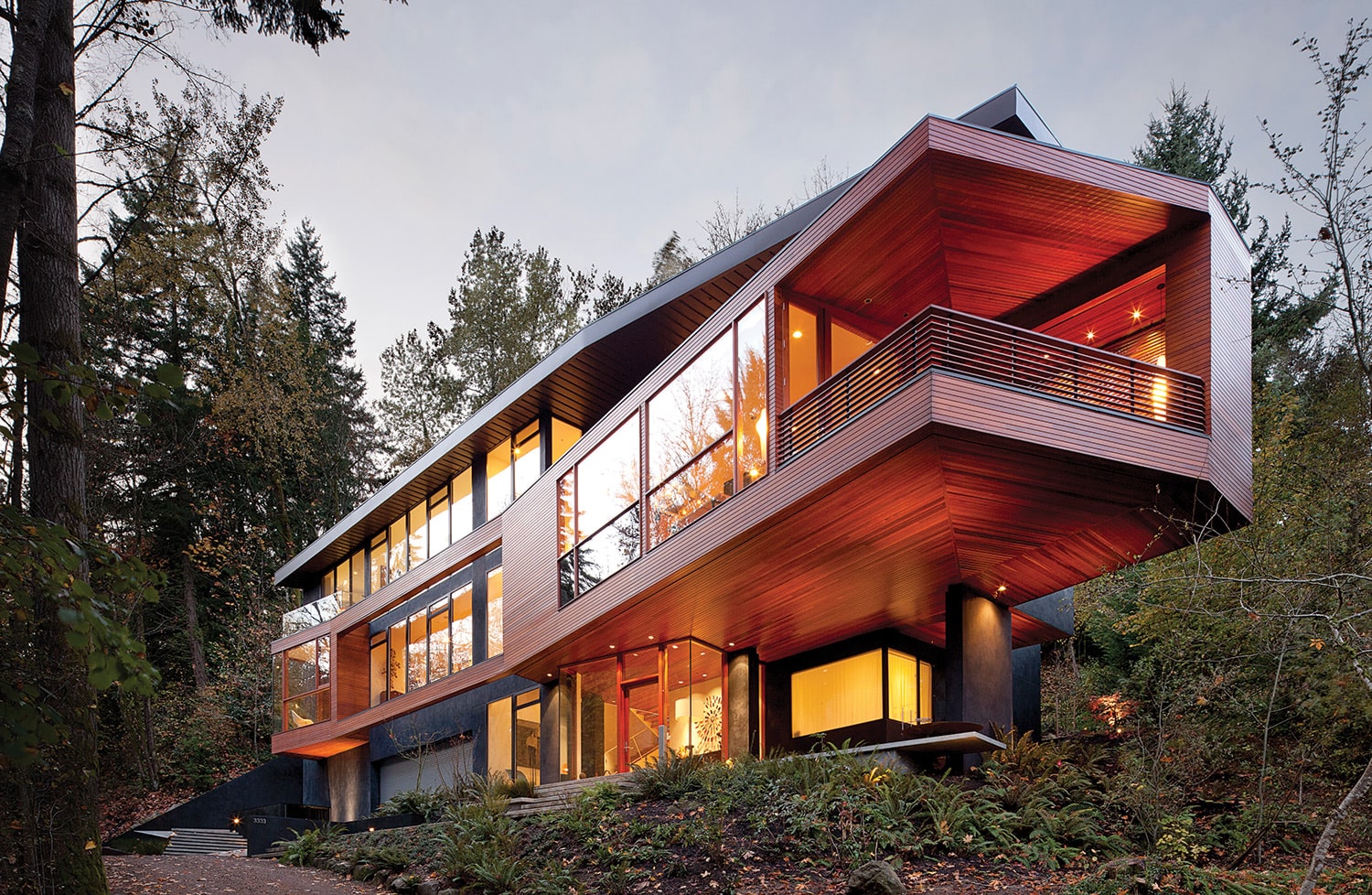 Just when you think you have Skylab figured out — geometric modular designs and breathtaking cantilevered extensions that appear as if they are about to take flight — founder Jeff Kovel and his team of 37 in Portland, Oregon, come up with a many-windowed, yurt-inspired event center atop a nearly 9,000-foot mountain in Utah. 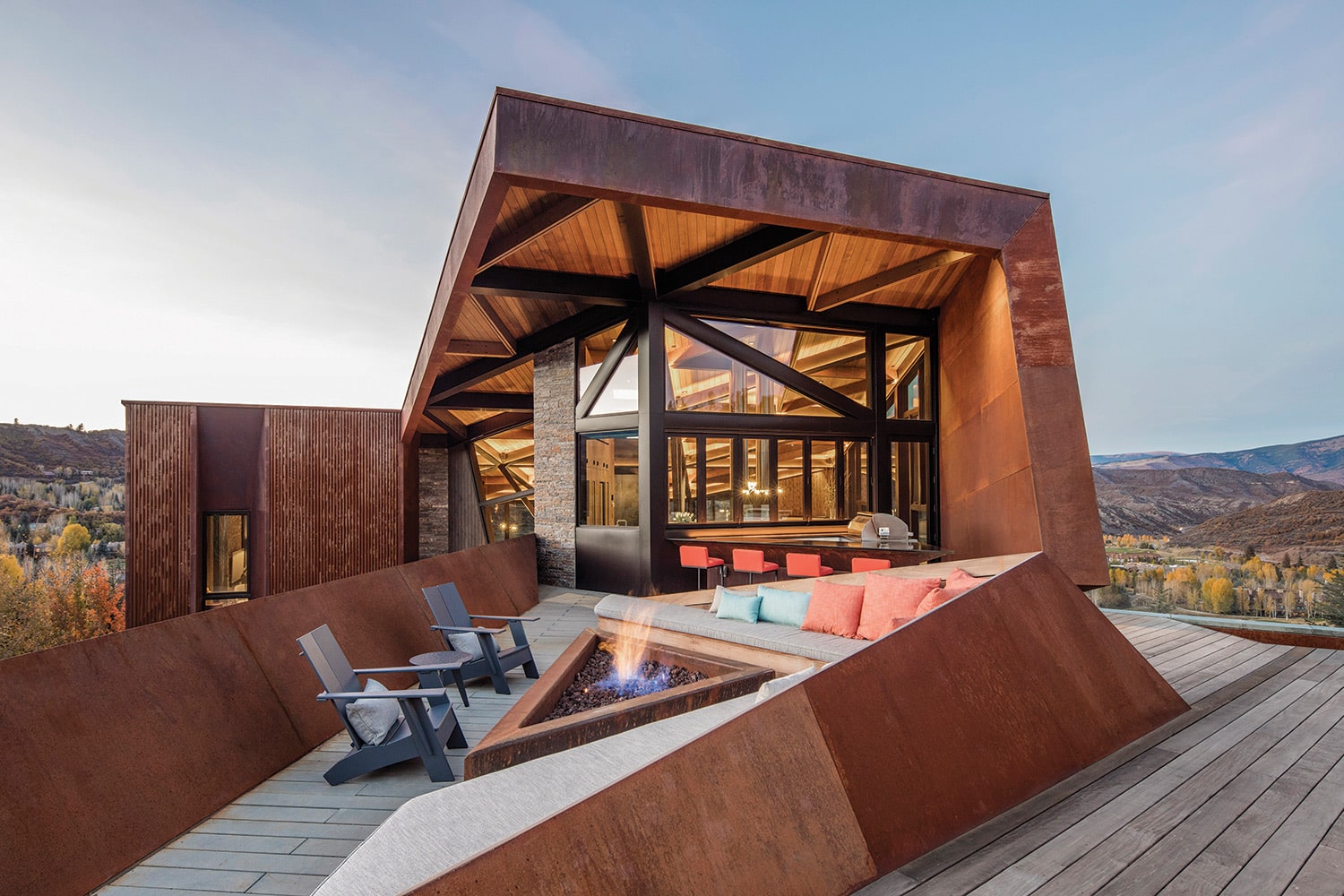 It all makes sense when you consider that Kovel opened the firm in 1999 when he was only 26 (in the beginning, he was the firm) in a city where the New York-born and Cornell-educated architect had only a handful of friends, and, as he likes to point out, not a huge Rolodex. He took every commission that came his way, no matter how small, and quite quickly built a reputation for innovative design and high-quality construction. 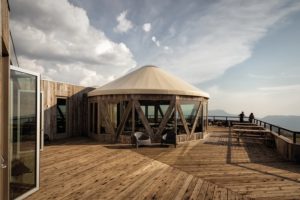 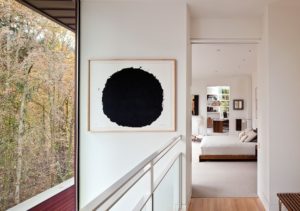 The clean lines of the interior contrast with the use of natural materials and the wooded setting, which is visible from every room. The house is clad in red cedar. Photos: Boone Speed

Hoke House, completed in 2007, was lauded for its stunning solutions to a triangular, steep, forested lot. Then it was used in the first of the “Twilight” movies, launching Skylab into fame. But by then, Kovel had been making his mark on Portland. He moved his family and offices (which had grown to a staff of eight) into a then run-down and seedy section southwest of downtown and created a home and commercial spaces clad in steel and glass that mirrored the roof of the 19th-century church next door. Wood from the decaying original 1907 building at 12th and Alder went into building Doug Fir, a restaurant, bar, and music venue in which Kovel was a partner. That project, he explains, combined a log-cabin theme with a 1960s diner. 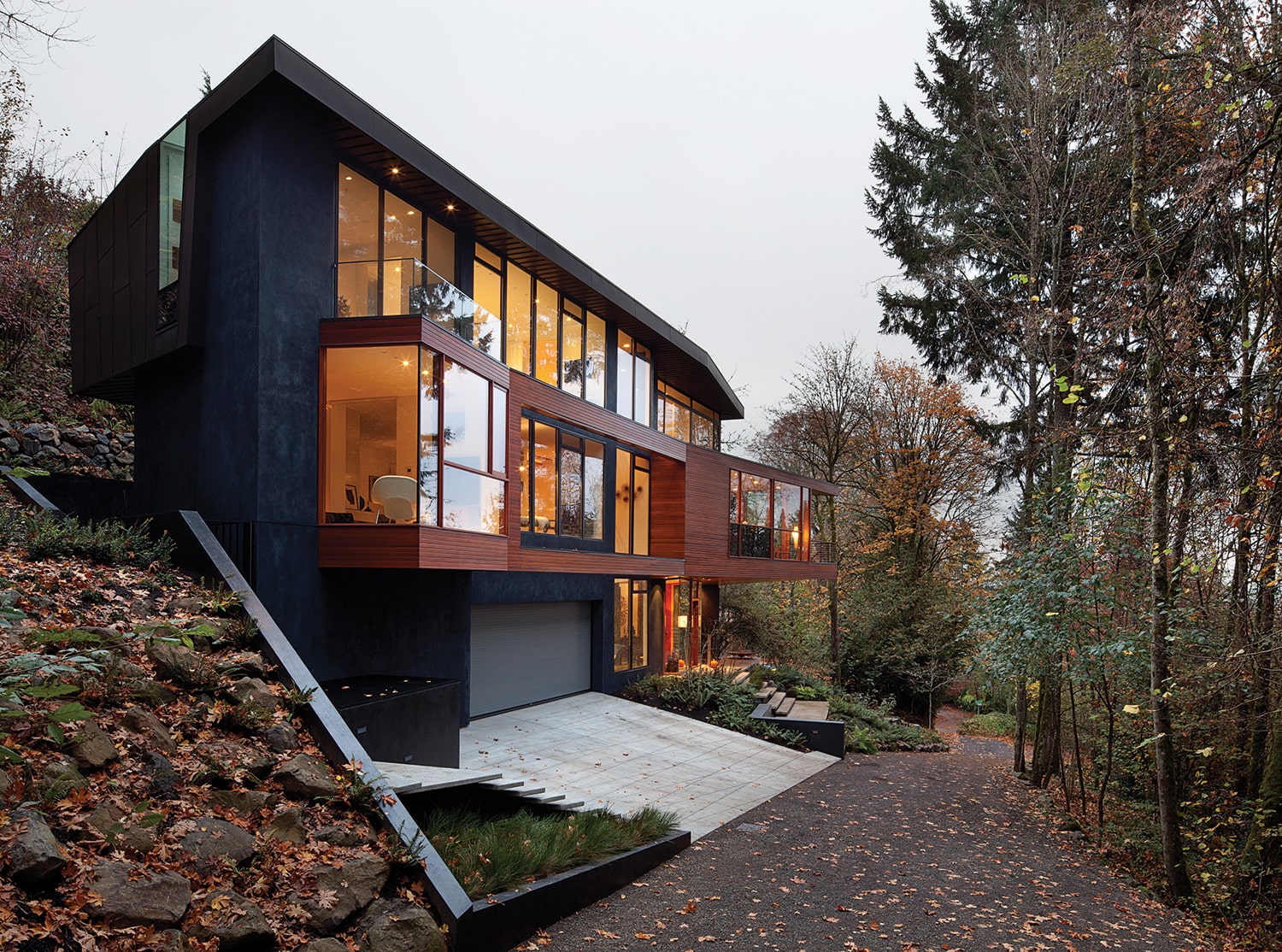 The owners of the Hoke House wanted a small footprint within the natural forest setting. Skylab’s solution was a cantilevered wing that gives the feel of a treehouse.

“We’re very entrepreneurial,” he says. “And in addition to designing, we’re developing and constructing projects, which I think brings us a broader perspective. We came into being right as the internet was emerging, which gave us huge amounts of information, so we’ve drawn on a lot of really diverse inspirations. I think you’ll see in our work an exuberant use of materials and forms and symbols, which are sort of mashed up into telling a unique story for each specific project.” 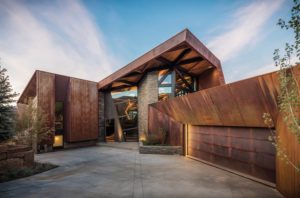 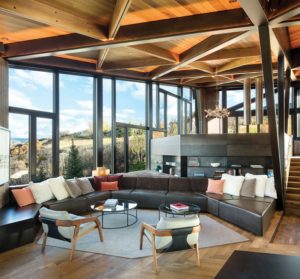 The built-in seating in the heart of the home was designed by Skylab. Interiors are by Anna Lambiotte, the leather is by Edelman, and the flooring is reclaimed white oak.

Among an evergrowing list of prestigious projects, Kovel has kept up his entrepreneurial edge with Homb, a prefab company combining “home” and “honeycomb.”

Kovel was 7 when his parents commissioned a modernist house, somewhat daring for their neighborhood. He was entranced by the whole process, from design through construction, and the experience became his path in life. After architecture school, he was drawn to the open spaces of the West, settling briefly in Telluride, Colorado, before moving to Portland.

Owl Creek’s spectacular setting called for an equally spectacular design that would blend into the sloping hillside and reflect the rocky, mountainous views. 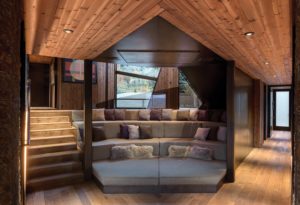 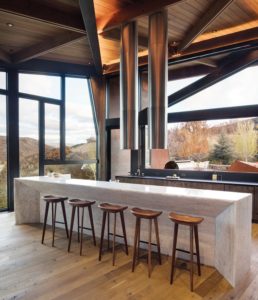 The white quartzite kitchen counter was designed by Skylab. Lighting throughout is by Lighting Workshop and Bocci, with a chandelier over the stairway customdesigned by Esque. Photos: Jeremy Bitterman

The experience of moving into the industrialized and decaying southwest Portland neighborhood ignited a passion for reclaiming such ailing areas and reintroducing both humans and nature.

“I think our goal has become relatively focused,” Kovel says. “We’re looking to demonstrate a better way to build things on this planet. I hope our legacy is around opening imaginations to how landscape and architecture and people and nature can exist more cohesively, hopefully through a series of projects that demonstrate a reclamation of the natural world.”

He’s aware that Skylab is in no way alone in this mission. “We’re not inventing this, and I’m not interested in owning it,” he says. “It’s more participating in a process.” 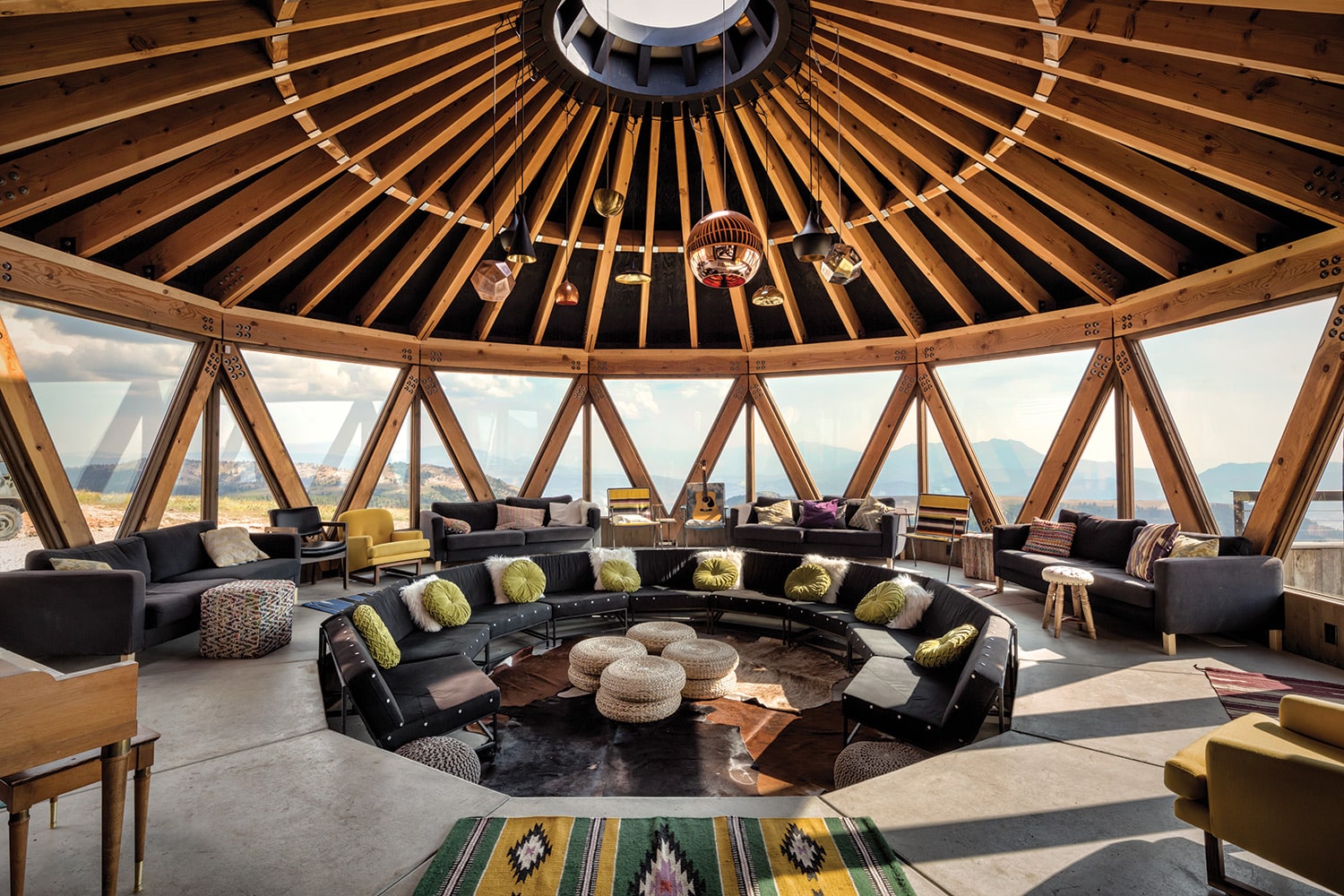 Gatherings at Skylodge are held under a ceiling of Douglas fir beams extending in spokes from a skylight. The prefabricated 100-square-foot triangular modules are not only beautiful, but also allowed Skylodge to be built in record speed. 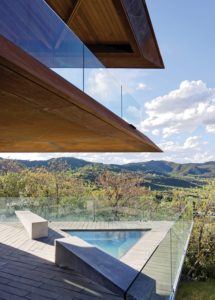 The triangular spa mirrors the cantilevering above. The deck is made from ipe wood. Photo: Stephen Miller 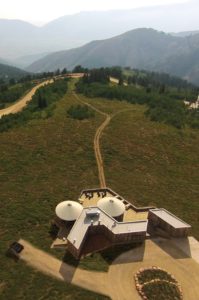 Viewed from above, the yurt-like rotundas reveal their canvas-topped roofs and the connecting building. The 5,500-square-foot space is inspiringly futuristic but has the comfortable natural elements of a classic ski lodge. Photos: Boone Speed

Which leads us back to Skylodge on Powder Mountain, a 10,000-square-foot property an hour’s drive north of Salt Lake City, Utah. It was bought by Summit, a group of wealthy millennials espousing socially conscious living. Formed in 2008, Summit has hosted worldwide events including speakers, artists, musicians, yogis, and top-flight chefs, and is as much about having fun as networking and enlightenment. Powder Mountain, as a permanent home, is projected to contain 500 member houses.

Skylab was the perfect firm to build the lodge — innovative, entrepreneurial, and idealistic. The Summit founders wanted an events lodge erected quickly, and by manufacturing the triangular modules in a factory outside Seattle, then trucking them up the icy roads to the peak, Skylab was able to accomplish a two- to three-year project in five months. Manufacturing indoors rather than on site added to the building’s sustainability.

“It was designed to have an encampment feel,” Kovel says. “We were inspired by polar research stations, utilizing a yurt concept.” Skylab also participated in the planning for Powder Mountain’s village and prototypes to inspire Summit members to build homes. 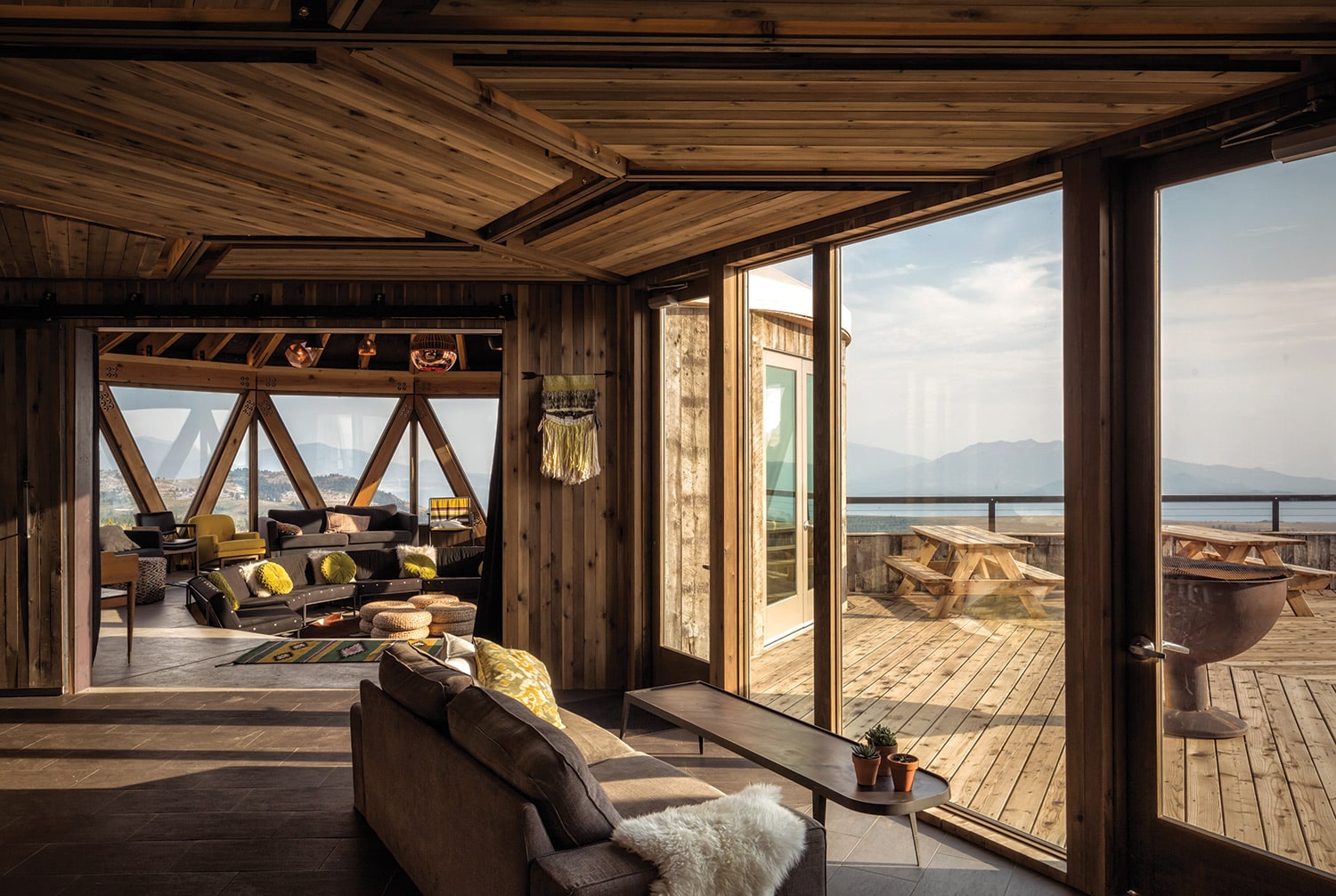 At Skylodge, there are spots for contemplation everywhere. 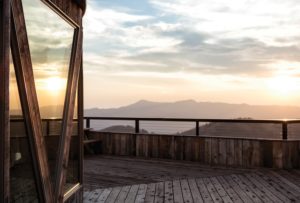 With an elevation of 8,950 feet, the views are unmatched. Skylodge 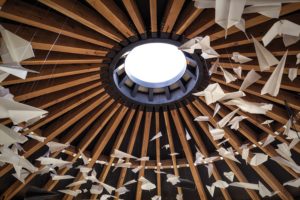 The origami installation is by Tom Dixon.

Another mountain project Kovel is passionate about is Owl Creek, located on a mountainside in Snowmass, Colorado. The house was built for two close families, using what Kovel calls a “pinwheel of different levels and modular spaces that sort of radiate out,” providing opportunities for privacy as well as for socializing. The line between indoors and out is blurred by expansive windows and a large patio, and the house’s outline reflects the surrounding mountains, with naturally patinated steel, stone, and wood that blend into the landscape. 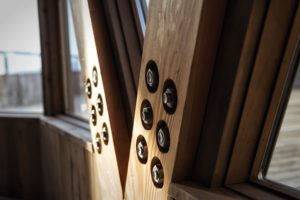 A detail of the prefabricated triangular modules that compose Skylodge. 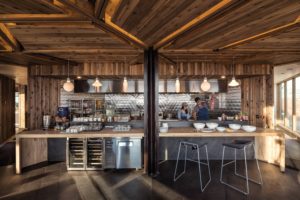 A third rotunda serves as a dining room that can seat 80, with a professional-grade kitchen. Photos: Boone Speed

“Both projects have passion points for me personally, designing around winter sports,” Kovel explains, “and they’re both modular in different ways and obviously remote. In both, we were designer, developer, and fabricator, and both are about trying to do things in a smarter way: faster, higher quality, sustainable, and more affordable, with a high-quality design.

“I think we’re working in a time that’s really unique,” he adds. “There’s a lot of opportunity to bring inspiration into the built environment, and I hope we’re helping the Northwest to find its voice in this era, to build the future and do it in a way that reflects that potential.”