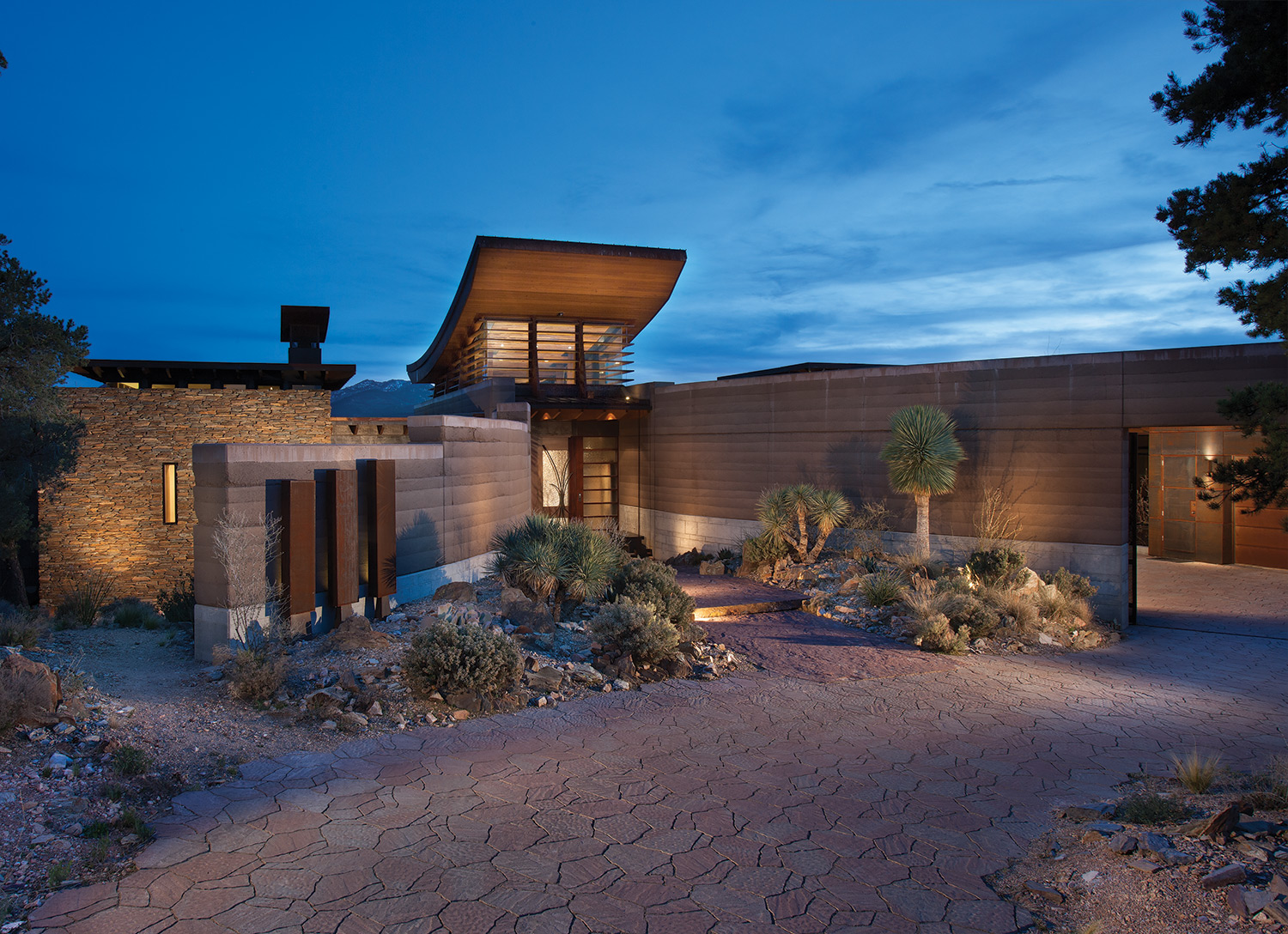 IT TOOK ALMOST THREE YEARS TO DESIGN AND BUILD this 6,392-square-foot masterpiece that is at once grand and gracious. The home is located in the desert mountains of Prescott, Arizona, about 100 miles north of Phoenix. Constructed for a sophisticated art-, history-, and nature-loving family, the home is the brainchild of architect John Sather, senior partner at Swaback Partners, and Anita Lang, principal designer and CEO of IMI Design. 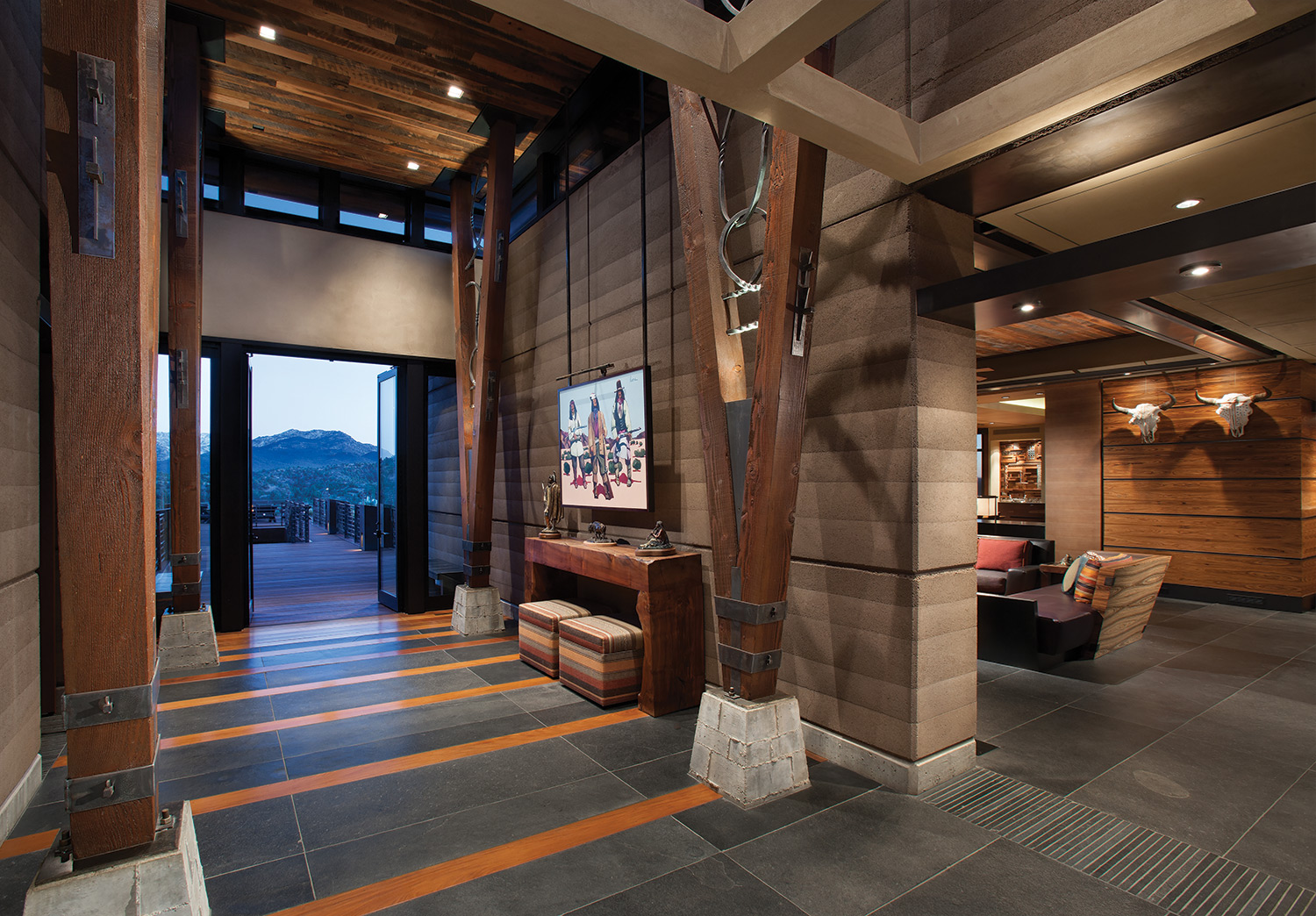 The rammed-earth walls inside the entryway offer a beautiful backdrop for the Thom Ross painting that hangs overthe console table between the Y-shaped beams.

“Anita and I just click,” says Sather. “I’m a real believer in collaboration, and on this house, we really became one.” Lang’s talents extend beyond traditional interior design, Sather notes. “Throughout the house there clearly is an interior architecture going on,” he says. 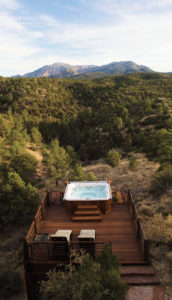 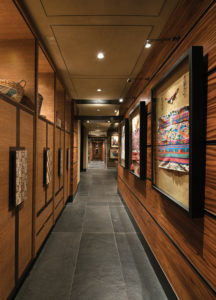 The grain of the Pau Ferro mahogany walls in the hallway — that serves as an axis between the master suite and the children’s bedrooms — beautifully offset the owner’s collection of colorful framed artifacts.

Lang says this is what she loves to do: picking up what the architect started. “John created this amazing philosophy for what this home was going to be about with these architectural masses and great materials and sweeping roofline,” she explains. “It was my job to make sure that was carried into the interior architecturally with the detailing.” 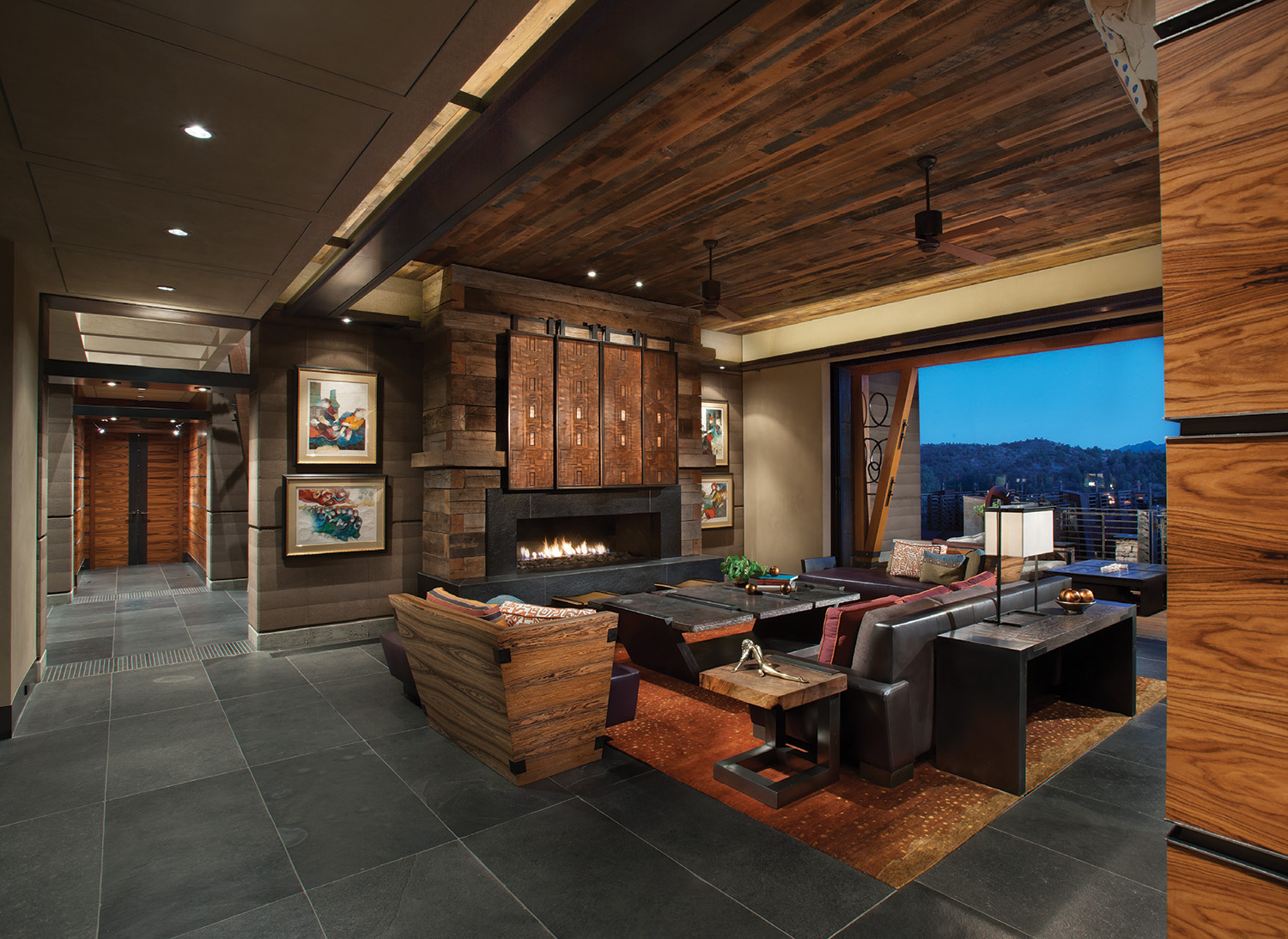 Four paintings by Sunol Alvar flank the fireplace in the living room, which is furnished with custom pieces by Anita Lang’s furniture line, Design 528.

The forward-thinking home is situated on a spectacular hillside lot with unspoiled views of Prescott’s Granite Mountain. The home’s form maximizes the view while complementing the rugged high-desert setting; its simple palette of natural materials — glass, wood, concrete, steel, and rammed earth — are presented in a crisp, progressive way. Rammed earth, which is constructed by hand-tamping a mixture of aggregate materials between forms to create a colorful striation, is a material used in buildings on historic ranches in Arizona and New Mexico, explains Sather. It is one of the home’s many nuevo nods to Southwest ranch life. 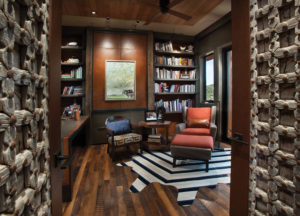 In the study, antique doors from India were framed with Pau Ferro mahogany wood to lead into the office, which features a hide rug by Kyle Bunting and chairs by Ted Boerner in a combination of fabric and leather. A painting by Earl Biss, on the storage cabinet behind, is mounted on a saddle-colored leather wall.

“Oftentimes, the simpler the detail looks, in the end, the more complex it is to get there,” says Andy Platt, project manager for Kitchell Custom Homes, which oversaw construction. “This home is very elegant, highly detailed, and highly designed, but you don’t feel dwarfed by it; it feels very well-proportioned and comfortable.” 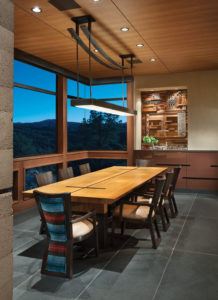 In the dining room, a Holly Hunt table in walnut and metal is surrounded by Berman | Rosetti chairs in designer-selected leather.

The curvilinear nature of the rammed earth walls at the front of the home, as well as the arching roof over the front entry serve as invitations to the Granite Mountain vista at the back, which Sather was careful not to give away all at once. Instead, he used the architecture to create an experience that progresses through a series of layers leading to a crescendo — the view. “As you go through the home, you’re always walking toward a point of beauty,” he says. “You’ll never walk into a blank wall; you’re always being drawn into an element of beauty.”

The home’s interesting and elegant elements begin in the ample foyer, one of the places where the rammed earth walls are articulated inside. Massive Y-shaped wooden beams — embellished with hammer-twisted iron in an abstract lasso design — reach to the reclaimed wood ceilings above. The dark, oversized limestone tiles — 2 by 5 feet to minimize grout lines — expand the scale throughout the space. 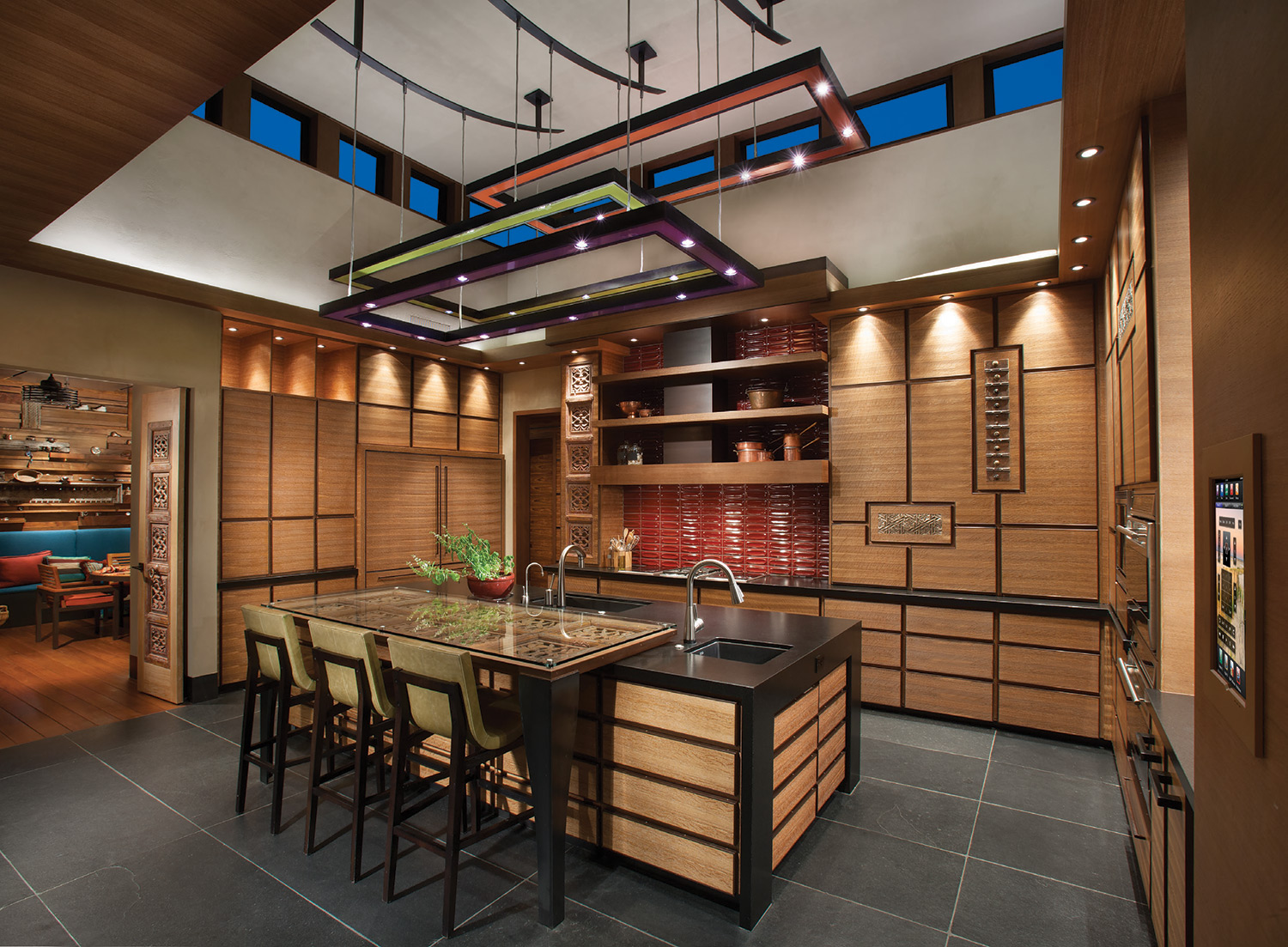 The kitchen features a tri-colored, rectangular mobile-like light fixture hanging over the island, which adds a modern touch and was custom designed by Anita Lang. Found-wood relics and a copper reveal are incorporated in the oak cabinetry.

In the living room, large reclaimed timbers jigsaw to create the fireplace, which is flanked by four colorful pieces of art. Custom copper panels above the fireplace artfully conceal the television. A wall of windows disappears, blurring the line between indoor and outdoor living and leading to a terrace, which is part of an expansive deck. Complete with a fire pit, the deck extends over the guest house, constructed down the hill from the main home to preserve the viewshed. 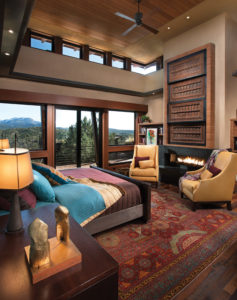 In the master bedroom, Lang used the colorful rug with saturated pops of persimmon and deep saffron to expand the color palette. Carved pieces from India are incorporated into the panels over the fireplace that hide the television.

The cook’s kitchen reads like a piece of art itself, and has a modern feel that also references territorial Southwestern elements. Architectural wooden relics are incorporated into the English oak cabinetry, constructed in a grid pattern with copper reveals and integrated finger-pull hardware. More found wood is utilized for the island, crafted from an intricately carved wooden door from India and topped with thick glass for practicality. 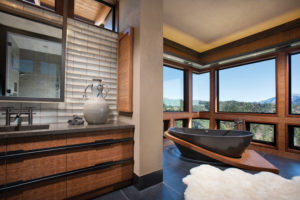 The lower view is maximized in the master bathroom with the use of a free-standing tub that is wrapped in a sculptural and artistic Pau Ferro mahogany skirt (designed by Anita Lang) that mimics the mountain slope in the background.

To balance the light throughout the home, Sather wrapped many of the rooms in clerestory windows, some of which he louvered if they were not view-critical. Ambient lighting comes from metal light trays suspended away from the walls, creating negative space that gives an expansive illusion.

Lang utilized pops of earthy colors throughout the home to contrast with the bulk of saturated, natural materials. Her color choices were inspired by the desert setting and the owner’s impressive art collection, which was cataloged before design began so it could be integrated into the design decisions. “I really wanted the color palette to express itself naturally in every space,” says Lang. “So it wasn’t just that we did a one-two-three color palette that we’d use everywhere. Instead, it would grow from space to space.” 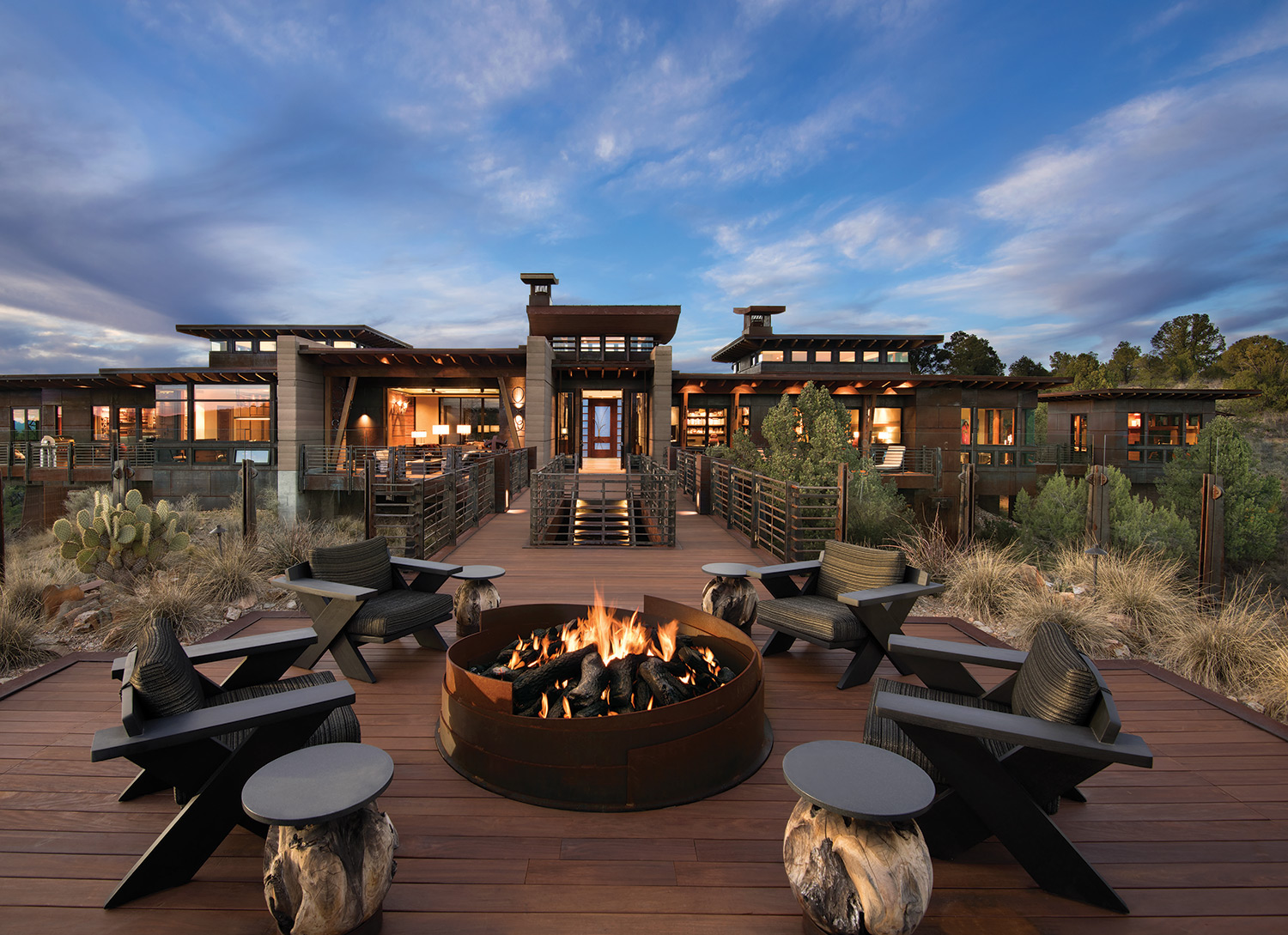 Light dabbles through the home at night, and the minimalistic use of outdoor lighting preserves the dark night sky for stargazing. The club chairs surrounding the fire pit are from Summit with custom stain by Doctor Teak.

Both Lang and Sather say they are proud of the way the home turned out, and of how much the owners love it. “It really is one of my favorite projects,” says Sather. “We were able to create a true home for this family, a dwelling that was really about living and life, and one that was expressed in a very architectural and artistic way. When you’re given that opportunity as an architect, you’re able to go to a higher place in your design.”