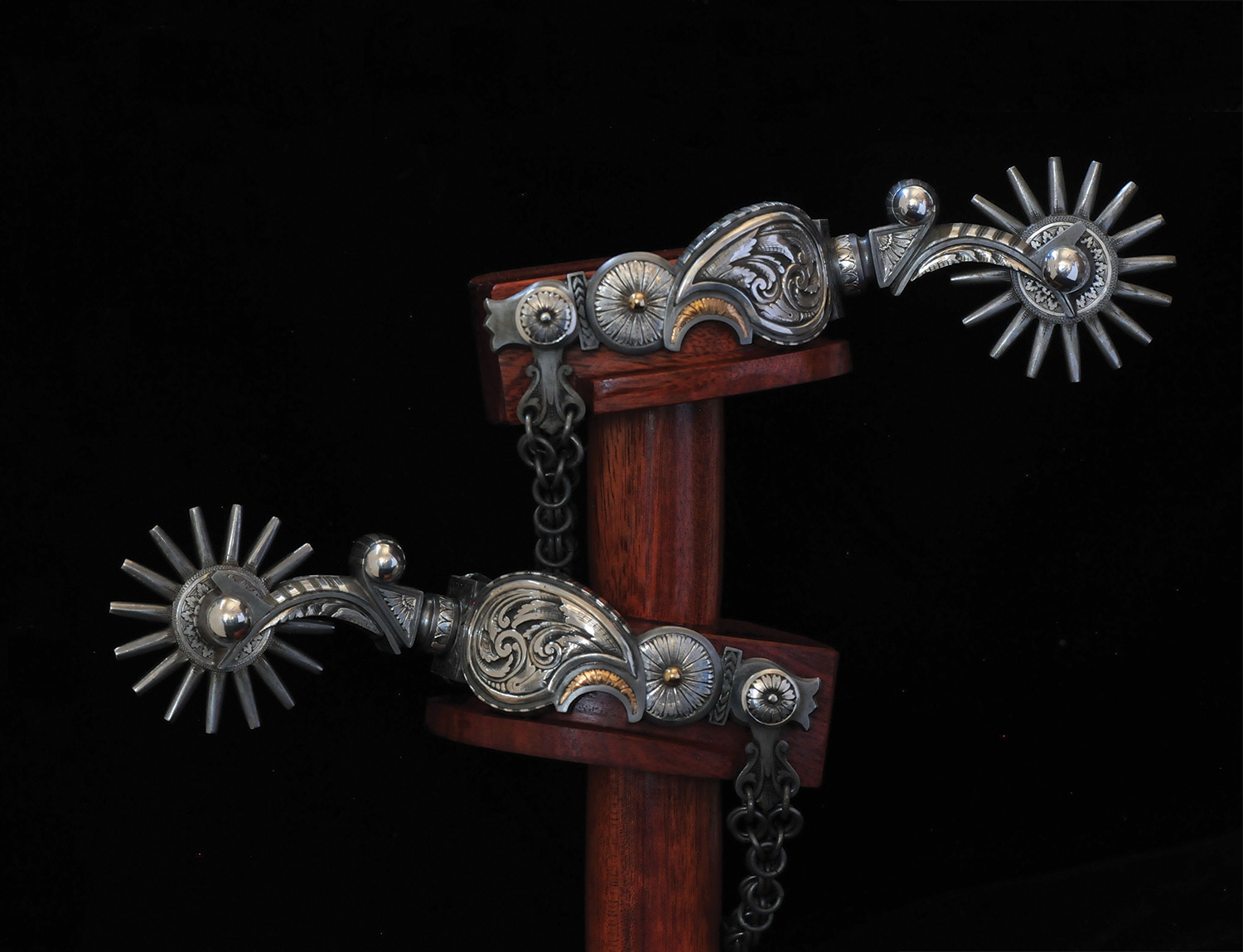 THE MASTER COWBOY ARTISANS who gathered in Hayden Lake, Idaho, more than two decades ago had few expectations beyond marking a pleasant meet-and-greet, sprinkled with a few marketing tips, and enjoying hail-fellow-well-met moments.

Instead, the assembly skilled in Western design, from saddle makers and silversmiths to bit and spur makers and rawhide braiders, learned they had everything in common. They found that no matter the medium, each person was dedicated to the highest standards of art that is both beautiful and functional, and each sought opportunities for challenges that would push his or her endeavors to the next level. 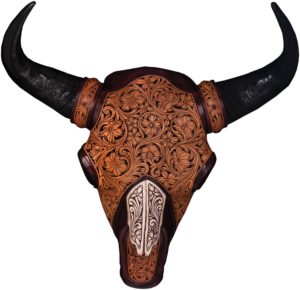 Such was the genesis of the Traditional Cowboy Arts Association or TCAA, an organization that, this year, celebrates its 20th anniversary as its members mark their continuing commitment to quality. 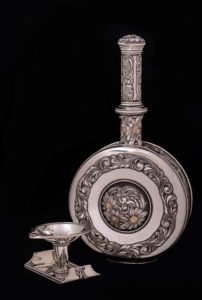 Scott Hardy — Celebration of the West, engraved, 28-ounce silver decanter with funnel and base made of sterling silver, 2018 TCAA exhibition

“As TCAA members, ours is a journey to perfection without ever getting there. We may never obtain perfection, but we are always reaching for it,” says Wilson Capron, TCAA president and a Texas-based maker of bits and spurs that demonstrate a simplicity of design and complexity of ornamentation that exceed accepted parameters for artistry paired with utility.

A pair of spurs created by Capron, and priced at $26,500 for their liberal use of 24-karat inlaid gold, play like poetry with the concept of intertwining leaves. As is true of every object fashioned by a TCAA member, there never was and never will be an exact replica. And in an era of endless duplication, that one-of-a-kind cachet is as rare as it is attractive.

The TCAA has never been a group inclined to rest on its laurels and, in any event, would find no ease there. Each of its roughly dozen active members is challenged to produce at least three pieces to be featured each October through January at the National Cowboy and Western Heritage Museum in Oklahoma City, Oklahoma, during Cowboy Crossings, the show and sale that pairs items by the TCAA and paintings by the Cowboy Artists of America. 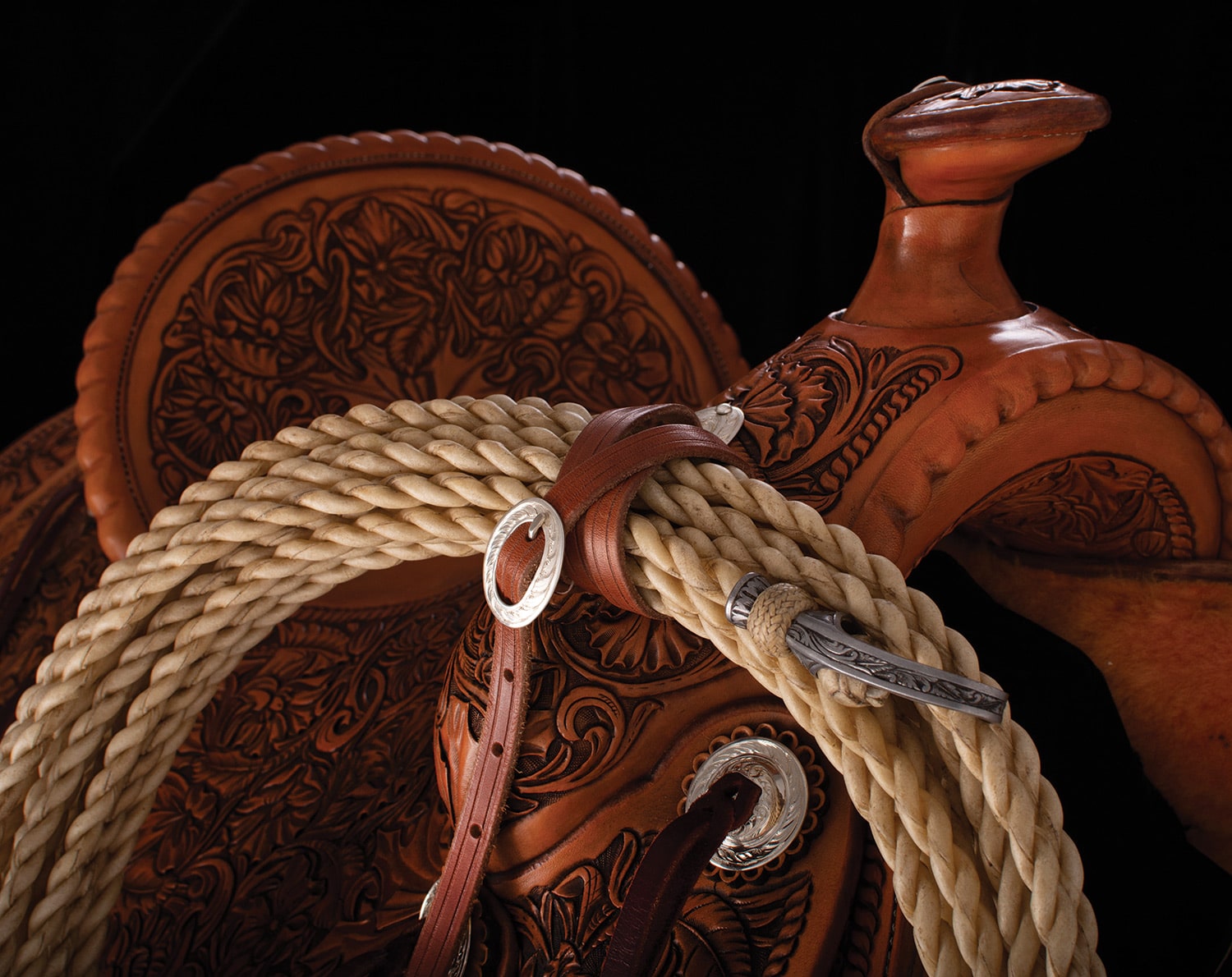 Canadian silversmith Scott Hardy, a North American legend who serves as TCAA trustee, is not interested in fashioning the ordinary. From belt buckles for the likes of country music star Garth Brooks and tennis great Andre Agassi, to custom-made flasks and shot glasses for the late artist Donald Judd, the artist is best-known for his outsized, abstract installations. Hardy designs, fabricates, and engraves works that appear to be otherwise wrought from airy inspiration.

Hardy is the caretaker — in spirit if not in fact — of the group’s purist manifesto. Like other TCAA members, he’s dedicated to preserving and promoting education, including scholarships to promising craftsmen and craftswomen to work one-on-one with masters in their chosen genre.

Hardy was among those who attended the first, informal get-together in Idaho that gave rise to the TCAA. “At that stage, I’d been a silversmith for 17 years, and I saw significant misrepresentation in the industry, with mass production companies falsely claiming to be doing handwork, and there was no way for the public to gauge the truth or fiction of that,” he says. 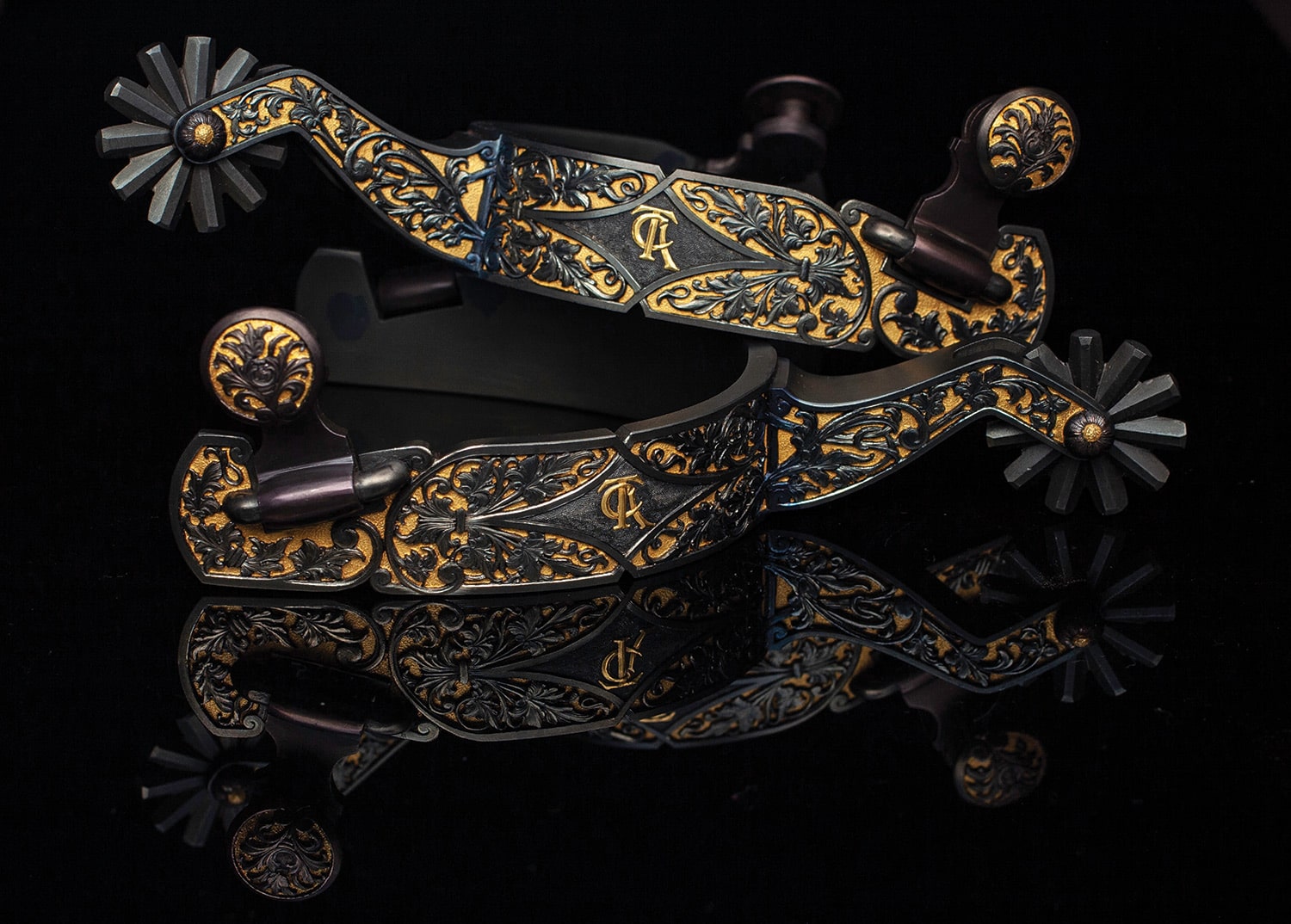 Hardy, acclaimed Idaho saddlemaker Cary Schwarz, and others agreed it was past time to establish principles and standards. And, in yet another sign of the group’s respect for its various arts, those needed to be in place not just for the crafters at hand but for those who would come after them.

“There didn’t seem to be anything out there setting the bar for young people to aspire to,” Hardy says.

It is akin to the philosophy that sprang to life with the 19th-century Arts and Crafts movement and its adherence to integrity of design and materials — principles established in reaction to an increasingly mechanical and industrial approach. Those seeking to turn back the tide of impersonal and uniform production urged a return to authenticity and to a standard that called for an item to be both useful and decorative.

The signal goals of the aptly named TCAA is enshrined in its mission statement: “The Traditional Cowboy Arts Association is dedicated to preserving and promoting the skills of saddle making, bit and spur making, silversmithing and rawhide braiding and the role of these traditional crafts in the cowboy culture of the North American West.” 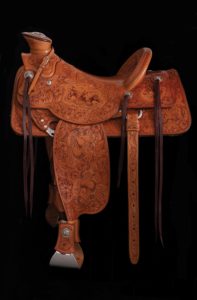 The sentiment is sufficient to dispel the faint of heart. Yet efforts aimed at entry into the group are encouraged with the assurance that demands placed upon applicants are both rigorous and achievable. To that end, TCAA conducts annual seminars and professional workshops, the latter in conjunction with the National Cowboy and Western Heritage Museum.

Like Hardy and his craftsmen peers, Schwarz thinks deeply about his chosen profession, or, perhaps, the profession that chose him, and how to forge an identity as an artist amid a broader American marketplace rife with what is artificial and synthetic, products that invariably fulfill a destiny based on built-in obsolescence. Schwarz argues that the culture of the U.S. West demands a union of rugged durability and enduring appeal.

Clients of Schwarz range from working cowboys to collectors of museum-grade saddles. Yet the approach by Schwarz never varies — he seeks to create, as the poet John Keats said, that thing of beauty that is a joy forever.

Schwarz saddles are known for their maker’s attention to every hand-done detail, from intricate floral designs carved in leather to fine sewing and shaping that ensures its comfort.

Depending on the piece, Schwarz will work in concert — to greater or lesser degree — with a silversmith and rawhide braider. Music is the metaphor he employs to describe the interplay of creative talents and it is an element in his own artistry and in the TCAA. “It’s an opportunity for separate musicians to come together in a symphonic event, with everyone playing their own tune but as a part of a much larger composition,” he says.

Among lofty aims, the TCAA secretary-treasurer is prepared to tackle another: shattering assumptions about objects sometimes seen as tools rather than art. He believes bridging that divide is vital for the future of the trades.

“We’re trying to take it to the point where it is seen as fine art,” says Schwarz. 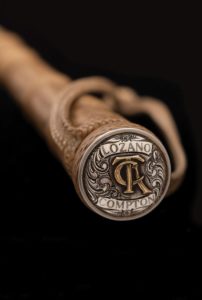 The average price of a saddle at the annual show runs around $30,000, and it might be adorned with accents in gold and silver, placing it in a tier akin to the one enjoyed by certain contemporary Western painters.

At a time when a lively discussion has opened across the West about the current definition of a cowboy, John Willemsma, TCAA vice president, comes across as that quiet, steady, and deeply insightful figure that author Owen Wister evoked in the cowboy protagonist of The Virginian. Willemsma, a Coloradan, easily wears the mantle of a man whose few words speak volumes.

Drawing from a legacy built on leather, Willemsma speaks of crossing that invisible boundary between craft and art. That is, the place where his saddles are formed and which ignites the appreciation felt by those who see them, either on their mounts or in the yearly show at the National Cowboy Museum.

And while Willemsma is not minimizing the necessity of financial reward, he is saying that it is not what ultimately motivates him or other TCAA members. “When you create something, you spend an incredible amount of time and you give your heart and soul to it,” he says.

That ethos, which so elegantly lends itself to the TCAA as a whole, is aimed at every artist who toils mostly in solitude, but is ever accompanied by the sense that he or she is abiding by the unspoken commands of an unnamed source of inspiration.

And Willemsma refers to yet another challenge implicit in the purpose of the TCAA. “You are only as good as the last piece you’ve done,” says Willemsma. Cowboy Crossings demands a degree of artistic exploration and excellence that cannot be understated, he says, adding, “It challenges every one of us, and, if it doesn’t, you shouldn’t be in the group.”

As with his colleague Schwarz, Willemsma sells saddles across the U.S. and overseas. And, along with Schwarz, she carefully studies historic saddles and their design, purpose, and decoration in order to build ones that pass the same test of time. Borrowing from history to make provision for the future is an old, but never outmoded, tradition.

Confirmation of the TCAA’s principles comes in select and invaluable exchanges. In seeking at the yearly show to outdo themselves and each other — in friendly competition — members find equal reward in a colleague’s triumph.
“We celebrate the success of the other person in selling an incredible piece of imagination,” Willemsma says.