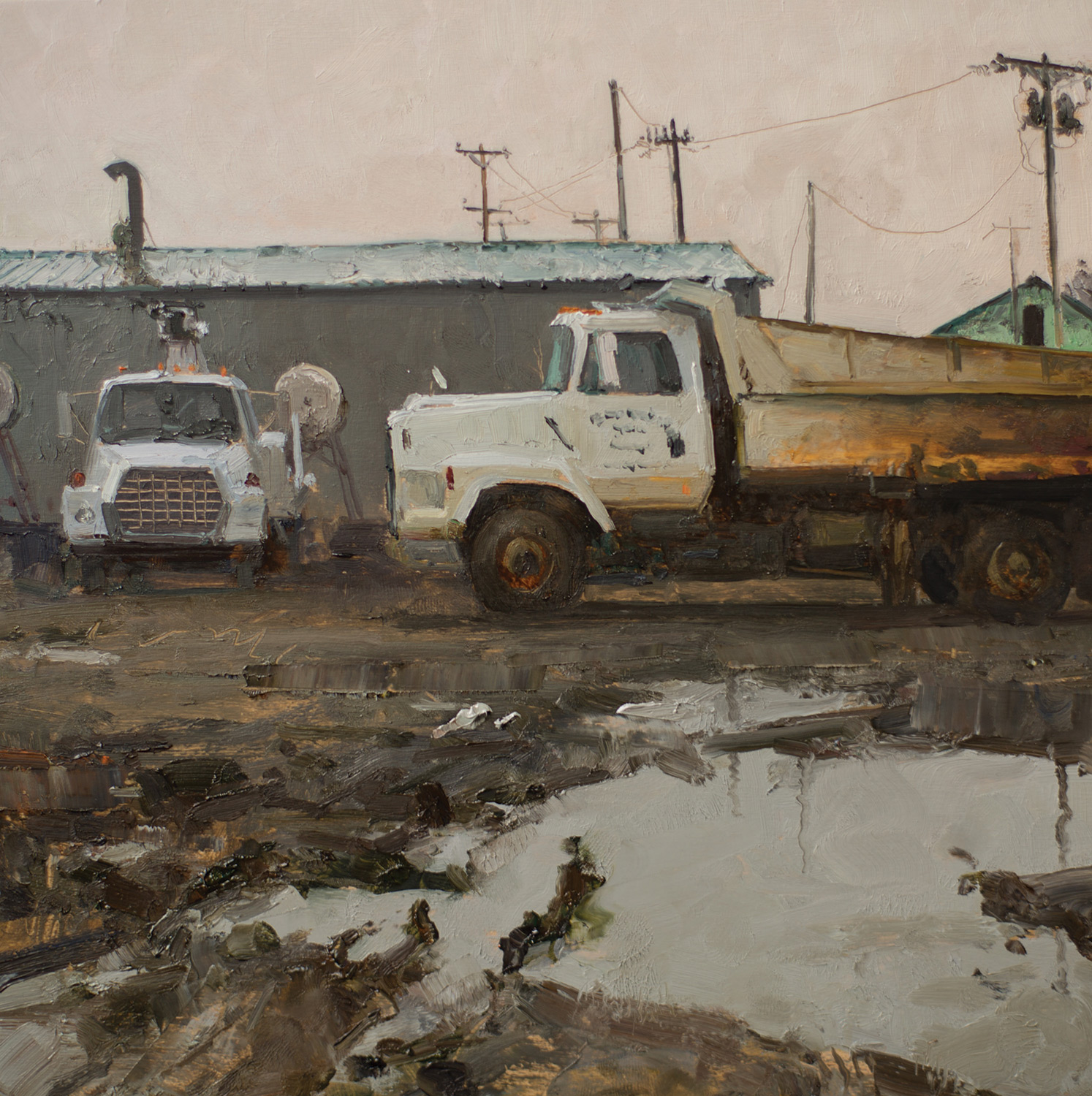 AS A YOUNG ART STUDENT 30 YEARS AGO, T. Allen Lawson assumed that at some point he would have a manageable handle on the technical part of applying paint. He would gain skills, improve them, and then basically be able to paint whatever he wanted. At the time, his niggling worry was that he’d run out of ideas and have to repeat himself. He smiles at the memory now. “If I never opened my eyes again, I’d have more ideas than I could paint in a lifetime,” he says. 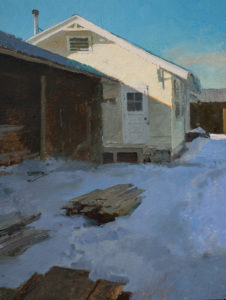 On the other hand, the 55-year-old artist has found himself driven over the years by dissatisfaction with what he’s able to do and a continuous need to further educate himself and improve his skills. Along the way he has discovered validation, often through encounters with the work of artists he admires, for the changes he’s made in his approach.

The first major change came after the Wyoming native had been painting exclusively outdoors for the initial 15 years of his career. He worked quickly, and although he considered his plein air painting to be fairly good, he wasn’t satisfied. Then he had an opportunity to visit art museums around North America and Europe. “I realized the majority of the landscape paintings I admired were not plein air,” he remembers. “They were done using all the knowledge acquired outside, but painted in a studio and developed over more time.” This awareness affirmed that his inner artistic struggle was signaling him to slow down. Gradually he shifted from plein air to studio work. 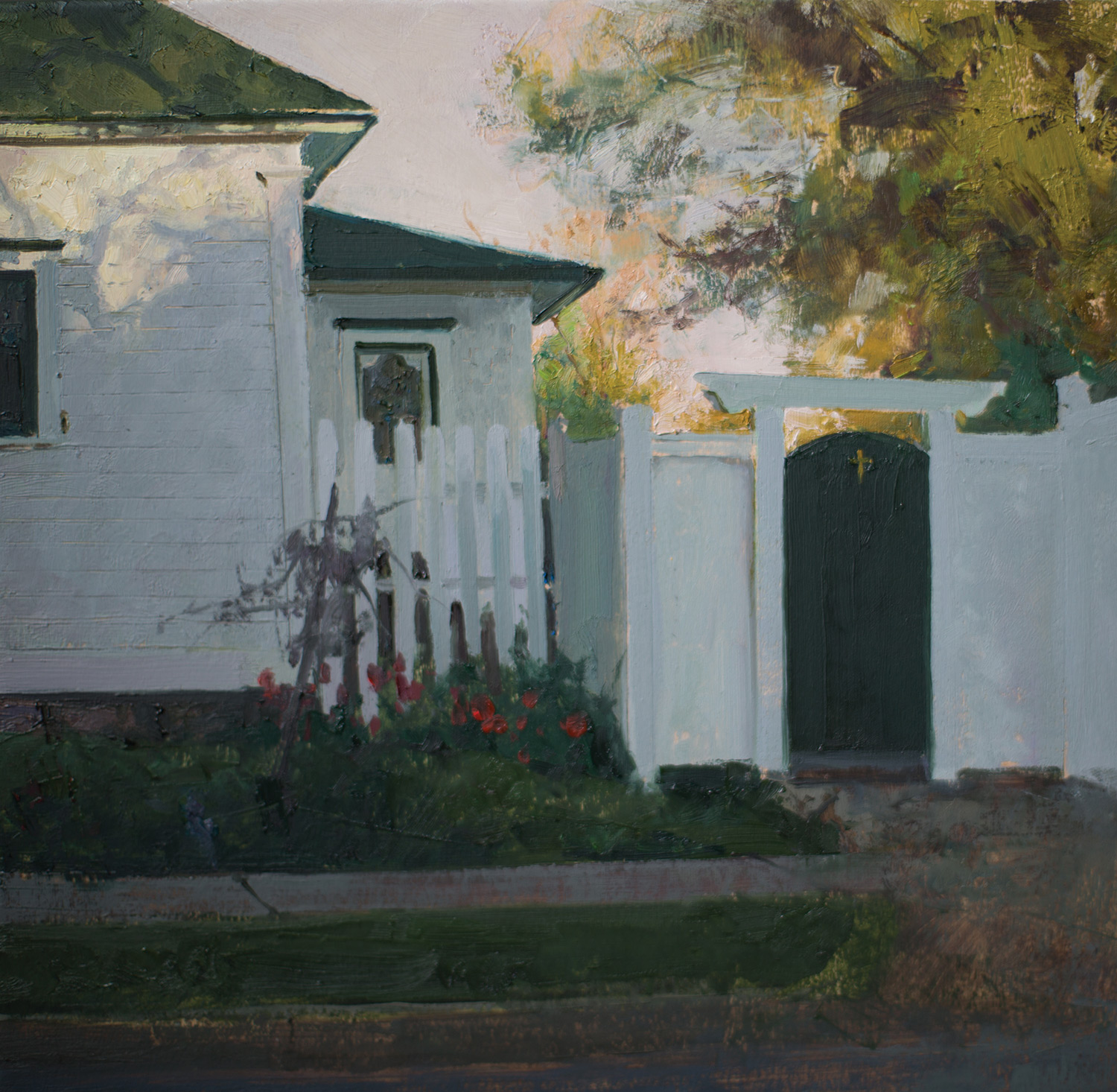 Another important insight emerged after Lawson and his family moved from his hometown of Sheridan to Rockport, Maine, about 17 years ago. Laboriously carving a small farm from a thickly wooded parcel of land, he began to learn what it meant to paint in a place with which he had gained an intimacy. Then he met fellow Maine coast residents and legendary American painters Andrew Wyeth and his son, Jamie, who painted many specific locations time and again. For Lawson, the experience underscored the value of becoming emotionally connected with his surroundings and reflecting that quality in his art through a powerful sense of immediacy and place.

In the work of the Spanish painter Antonio López García, whom Lawson had the opportunity to meet a few years ago, he gained confirmation of his need to slow the artistic process even more. Best known for enormous cityscapes rendered from high vantage points, López García can spend from five to a dozen years on a single painting. Today, Lawson gives himself the liberty of taking as long as eight months to complete a large piece. Sue Simpson Gallagher, owner of Simpson Gallagher Gallery in Cody, Wyoming, has known the painter for 33 years. “Tim is continually making adjustments, stylistically and technically, and he’s made sure he’s had the freedom to take chances in his work — glazing, sanding, impasto, palette knife,” she says. “He doesn’t limit himself.” 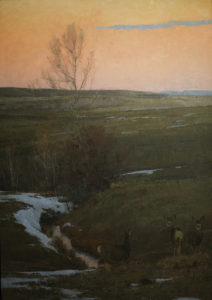 While Lawson is known for his landscapes, a solo exhibition opening November 7 at the Sage Community Arts Center in Sheridan consists entirely of small-scale urban scenes from the city where he grew up. Hometown features his singular perspective on streetscapes, alleyways, neighborhoods, snowplows, railroad tracks, and other ordinary aspects of Sheridan in all seasons and every type of weather and light. The show runs through January 2, 2019. And then, from February 7 through April 28, the Booth Western Art Museum in Cartersville, Georgia, will present Mood and Tone: The Art of T. Allen Lawson, a retrospective that will include several new works.

Lawson describes his initial entry into art as “through the back door.” His boyhood in Sheridan, where his father owned a pizza shop and his mother worked in a grocery store and later as a secretary, did not appear auspicious for a future painter. There was no original art in the family home, and no one played music or even read many books. But a confluence of events enthusiastically pulled his attention toward art. A competitive swimmer as a young teen, he traveled regularly to swim meets around the state, staying with the families of other racers. One summer, the father of two swimmers from Gillette, Wyoming, a painter named Bob Barlow, took the boys to the Buffalo Bill Center of the West in Cody. For the first time, Lawson encountered dozens of original paintings by Charlie Russell, Maynard Dixon, and other greats. “It just blew me away,” he says. 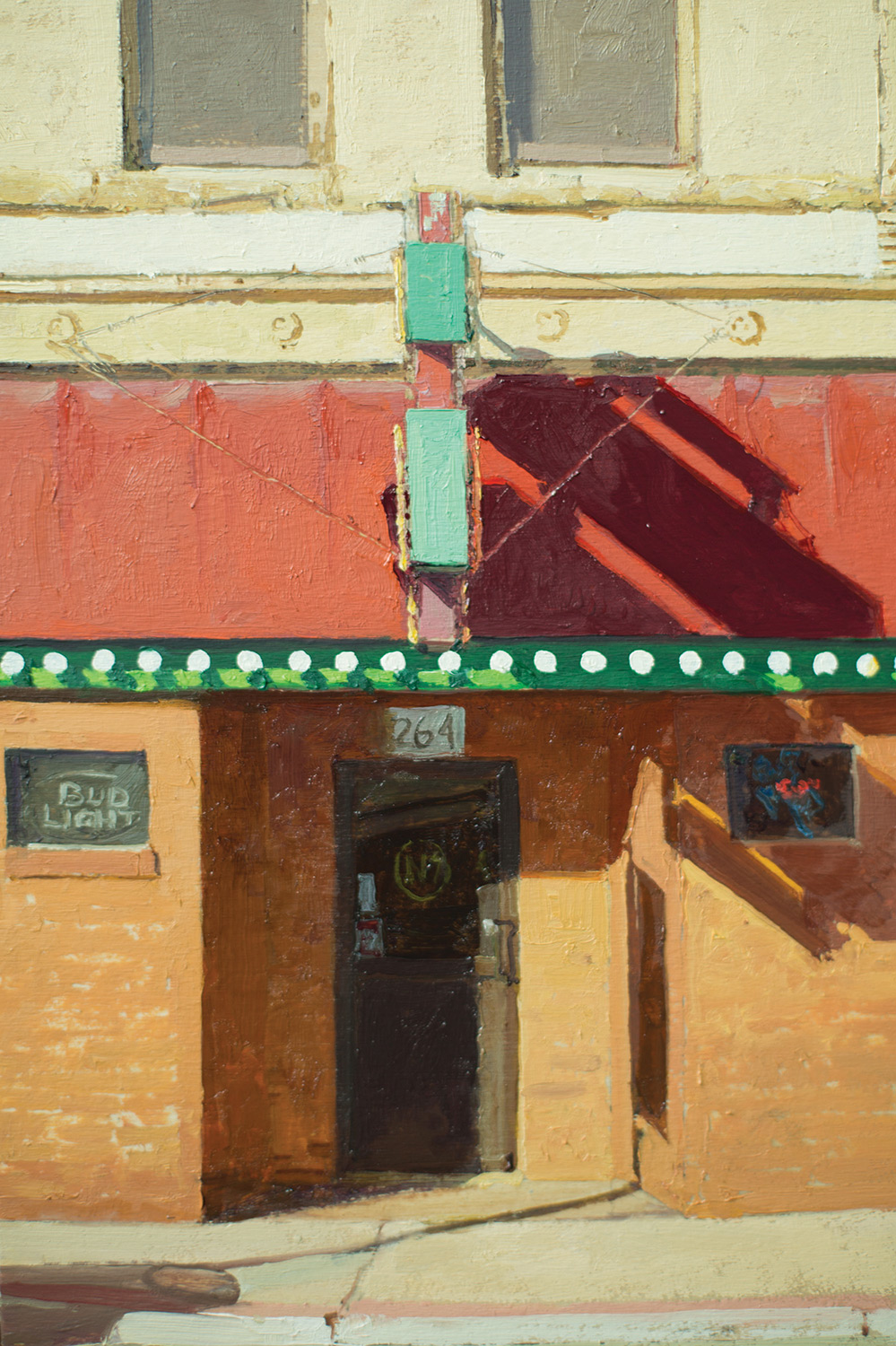 Then he had an extraordinary junior high art teacher who encouraged his burgeoning excitement about art. At the end of his first year of classes, she invited 13-year-old Lawson to be in a two-artist exhibition with her. His part in the show consisted of “about a dozen of the worst paintings ever created,” he says, a cringe in his voice, although he was proud of them at the time. At prices of $50 to $75 each, he sold enough to relatives and friends to make $500, a virtual fortune for a boy his age. It planted the notion, soon corrected by reality, that he could become a professional artist and quickly get rich. In high school, he signed up for every available art class — twice. 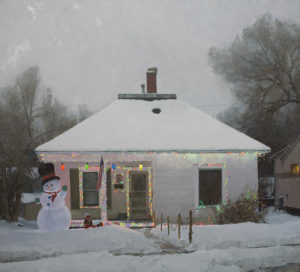 Following graduation, Lawson’s formal art education included studying at the American Academy of Art in Chicago, Illinois, and at the Lyme Academy College of Fine Arts in Old Lyme, Connecticut. At both schools, he spent as many as six hours a day learning to draw and paint from life. While that training was primarily figurative, the skills of observation, understanding color, and capturing the moment translated naturally into plein air painting. Over the years, he also benefited from getting to know and paint with a number of exceptional artists, among them, Ned Jacob, Skip Whitcomb, and George Carlson.

For a majority of the last two decades, Lawson and his wife, Dorie, and five children (ages 12 to 21) have divided their time between Wyoming and Maine. In Maine, they spend summers on their farm near Rockport, and each fall they return to a cabin — and hope to soon build a home — on a ranch near Sheridan. Lawson’s studio, on the second floor of a downtown Sheridan building, was built more than a century ago for a photographer. Its towering, 13-foot-wide windows, with a slanting upper section of antique glass, provide perfectly diffused north light. It’s a dream studio, the artist says.

Winter is Lawson’s favorite time to live and paint in Wyoming, when the multitude of reflected colors that make up the “white” of snow are revealed. In Letting the Days Go By, those muted hues are joined by the delicate twinkle of Christmas lights on a small house and the bright red scarf of an inflatable snowman in the winter dusk. The painting was exhibited at the 2018 Prix de West, and the study from which it was painted will be on view in Sheridan at the Sage Community Arts Center show in November. 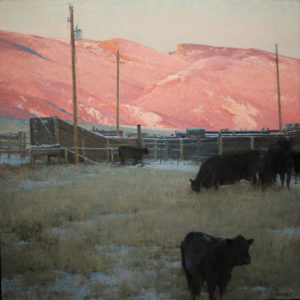 Lawson has received a number of honors and awards over the years, including the 2017 Prix de West Purchase Award and selection by President George Bush and First Lady Barbara Bush to create the White House Christmas card in 2008. But the awards that please him most have been conferred by other artists. In both 2016 and 2017, he was presented the Robert Lougheed Memorial Artists’ Choice Award during the Prix de West, and in 2016, he also earned the Prix de West Directors’ Choice Award for Outstanding Landscape. “When my peers vote for me, it’s a huge honor,” he says.

That’s because while many viewers experience the impact and beauty of his art without quite knowing why, his fellow painters have a sense of what makes it that way. Rather than focus on depicting objects or landforms, for example, Lawson approaches the act of applying paint almost entirely from an abstract point of view.

“Whether a dark area is a cow or a shadow on a canyon wall, I think of it as an abstract shape and ask how I can create the most interesting or pleasing visual pattern,” he says. With color as well, he has freed himself from the straightforward rendering of a scene. Instead, he takes advantage of the power of color to effect an emotional response, while still reading as true. 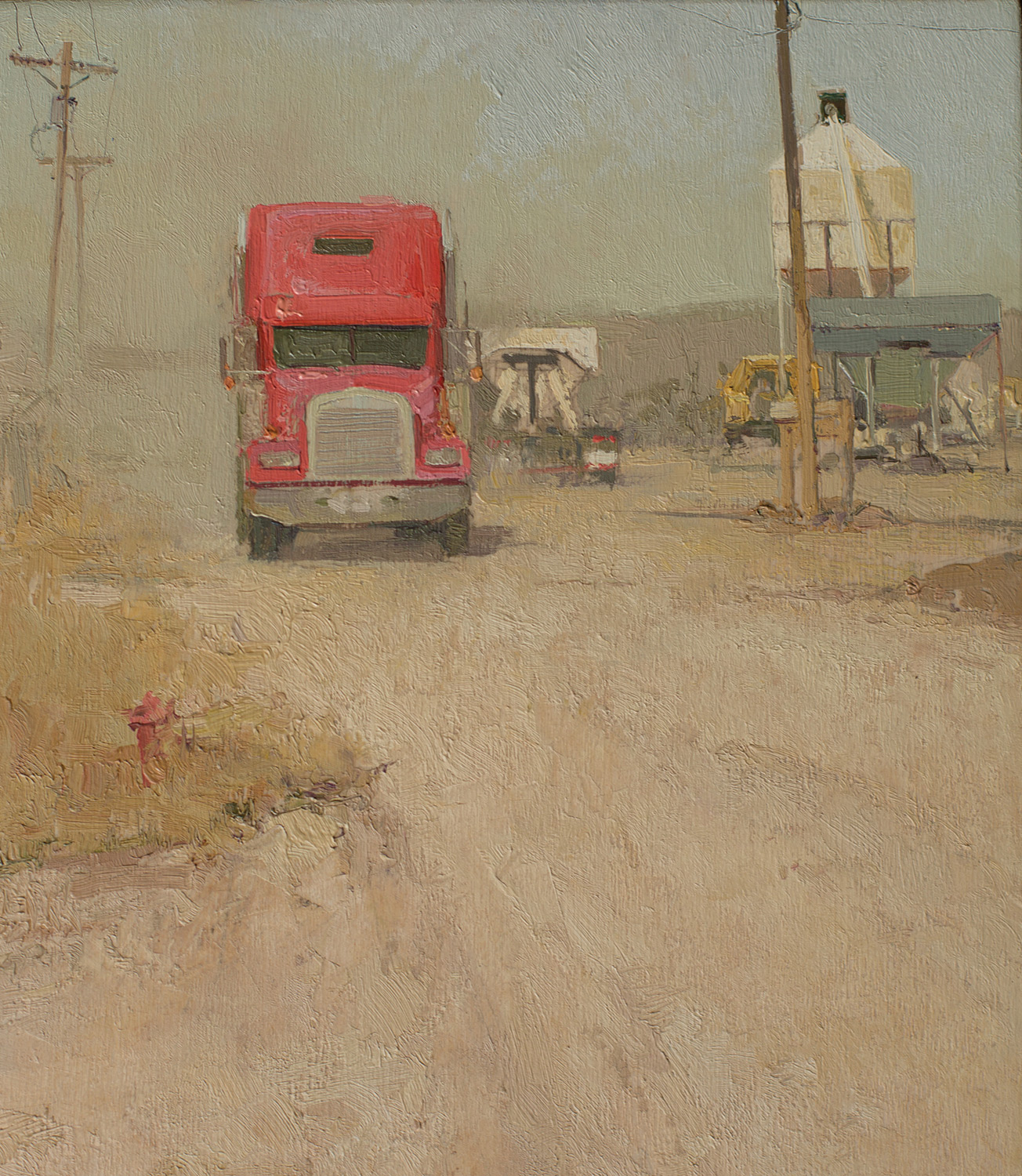 Capturing this kind of resonance and deeply investing himself in the work is the difference between simply painting and creating art, Lawson says. For him, it means less time spent searching for subjects and more time absorbing whatever inspires and excites him. “I find if I’m open in mind and spirit, I might see a bird land on a fence, and then I watch the flight pattern, and then I notice the shadows,” he says. Having watched the artist’s skills in this realm develop over the years, Simpson Gallagher admires his ability to distill what he sees and feels into something intriguing and essential. “In the elegance and stillness of his paintings, there is always a narrative, and it’s a story that I want to know,” she says.

Because inspiration can strike at any time, Lawson carries a notebook virtually everywhere. He stops and makes notes and quick sketches. Later, he returns to the scene and spends as much as a week or two creating in-depth drawings for a better understanding of the subject. From there, he moves on to an oil study, and over weeks or months in the studio, a finished piece. “The more I’m around a place, the more possibilities I see,” he says. “Rather than going out and looking for subject matter, I feel like the subject matter comes to me.”

Sorry, the comment form is closed at this time.