Louis Escobedo refuses to limit his creative expression to any one theme. “I like to paint still lifes, people, and landscapes. Even after all this time, I’m happy to paint each one, and I still get excited when I start a new one; it’s like getting excited to see friends,” Escobedo says. 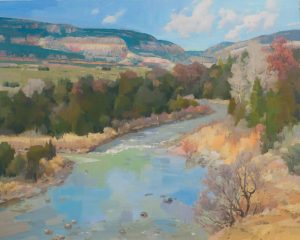 His abilities have earned him the reputation of being a colorist, yet in his studio there’s a black and white self-portrait of him at 8 years old with a knife in hand, ready to cut his birthday cake. On another wall is a large painting of three people at a white-clothed table, enjoying a meal; the only color in the painting is a golden Burger King crown on one of the happy diners. “We all eat what we choose and what makes us happy,” Escobedo says. “Everyone has a choice.”

So it is with art. Individual likes and dislikes determine how one responds to a painting. Escobedo is fortunate that many of those who have collected his work over the 36 years he’s been a professional artist keep coming back for more, with some acquiring more than 20 of his pieces. 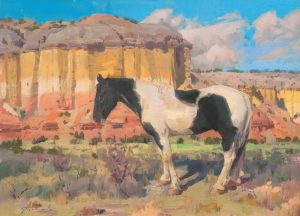 Perhaps the secret behind the enthusiasm for his art is that like the two artists he most admires — Pablo Picasso and Jean Michel Basquiat — Escobedo is a seeker, always looking for fresh ways to execute a painting. A book that greatly influenced Escobedo, he says, is Art Brut: The Origins of Outsider Art by Lucienne Peiry. The work examined the phenomenon of Outsider Art, and the artists in the early 20th century who began to look beyond the accepted canons of Western art for new inspiration. Abstract artist Wassily Kandinsky, for example, collected artwork by children and people in mental institutions. “I figured out from reading [Art Brut] that Picasso, Matisse, and Kandinsky himself were all just trying to figure out new ways of painting,” Escobedo says. “Once, I went to an exhibition of Basquiat’s art. I was looking to see how he blended his paints; I looked and looked. Then I discovered that he didn’t blend them; he stepped on them with his sneakers! I haven’t tried that yet; I only go so far.” 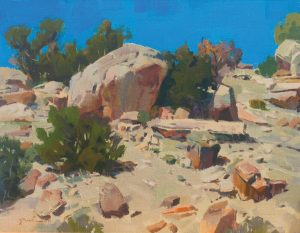 Escobedo was born in Sweetwater, Texas, in 1952. He was interested in art from a young age, and at 6 he won Best of Show in an elementary school art contest. He went on to earn a Bachelor of Fine Arts in advertising art from Sam Houston State University in Huntsville, Texas. After graduating in 1974, he began his career as a freelance illustrator in Texas.

In 1985, he shifted his focus to work as a professional fine art painter. Along the way, he took workshops from Ramon Kelley, David Leffel, and Richard Schmid, among others. His lifelong dedication to creativity paid off, and Escobedo was awarded his first gold medal from the National Oil Painters of America in 1994. Ten years later, he received his second gold medal, and by 2019, he had received the Master Signature status from the organization based on his mastery of oil painting and accomplishments in representational art. 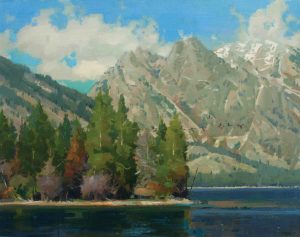 Escobedo’s creative process involves painting as much as possible. And his enjoyment of painting makes it feel less like a job. “I love it so much. I work from Monday through Sunday; I stretch my own canvas, varnish my finished paintings, and for smaller paintings, I glue my canvases down on gator board,” he says.

His ability to capture a subject’s essence is a skill he’s earned over time. And living in various cities has given him the opportunity to paint in different climates with varying light intensities. From gray days on the Chesapeake Bay, to the mile-high city of Denver, Colorado, and his current hometown of Santa Fe, New Mexico, each location has provided the opportunity for Escobedo to take on different subjects and capture new environments. 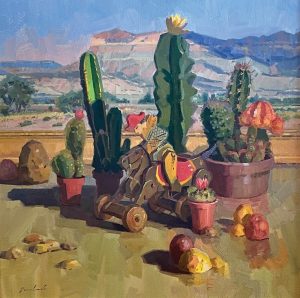 Escobedo enjoys traveling and finding the magic in each place. While plein air painting in Utah, the barns, blue skies, farm animals, and color-filled landscapes captured him. The mystique of Santa Fe’s high desert also drew him in, while the boats in Gloucester, Massachusetts, fascinated him. “It was so beautiful, and the people were so kind. One day, I found its magic lasted for four or five paintings,” Escobedo says. “It blew me away!” 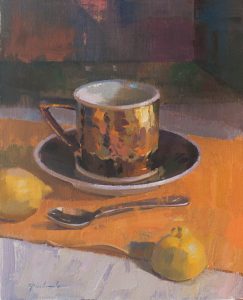 The artist seeks to capture his own impressions of whatever scene he is taking in. “To me, I never know what my painting is going to look like. I don’t really try to capture a stream or a tree or a mountain. It’s my imagination of that stream or that mountain. Sometimes there’s an art spirit that gets into you,” he says. “I’m not trying to attain the photographic reality of a scene; this is my version of it.”

Escobedo says painting is an example of how one thing leads to another — a stroke of one color and value will affect the next one. “In one way, you might say we artists are illusionists,” he says. “Take color, for example; one object can’t be classified as a certain color. There’s always color bouncing within it. Trees can have all kinds of colors in them. Someone can say, ‘I see green and brown in that tree.’ But there can be a bit of cadmium orange, blue, red, or burnt sienna in it. You can classify value but not color. Colors are my kids. I always say, ‘Go out and play, but watch your values.’” 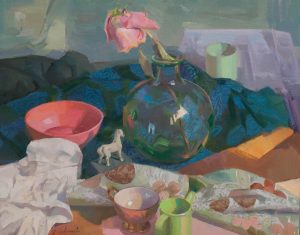 Beyond the joys of exploration, Escobedo feels that his calling as an artist fulfills a need in society. “Even if a painting is, in a way, an illusion, we need art. Especially in these times, we need the arts desperately,” he says.

Susan Bingham, co-owner of the Maynard Dixon Legacy Museum in Mount Carmel, Utah, which will host a solo exhibition of Escobedo’s work opening September 18 and continuing through October 31, agrees with him. Referring to the recent COVID-19 pandemic and the subsequent isolation of families and individuals, she says, “It is the uplifting qualities that the arts bring us in all their forms that are the perfect elixir for life, especially in difficult times.”