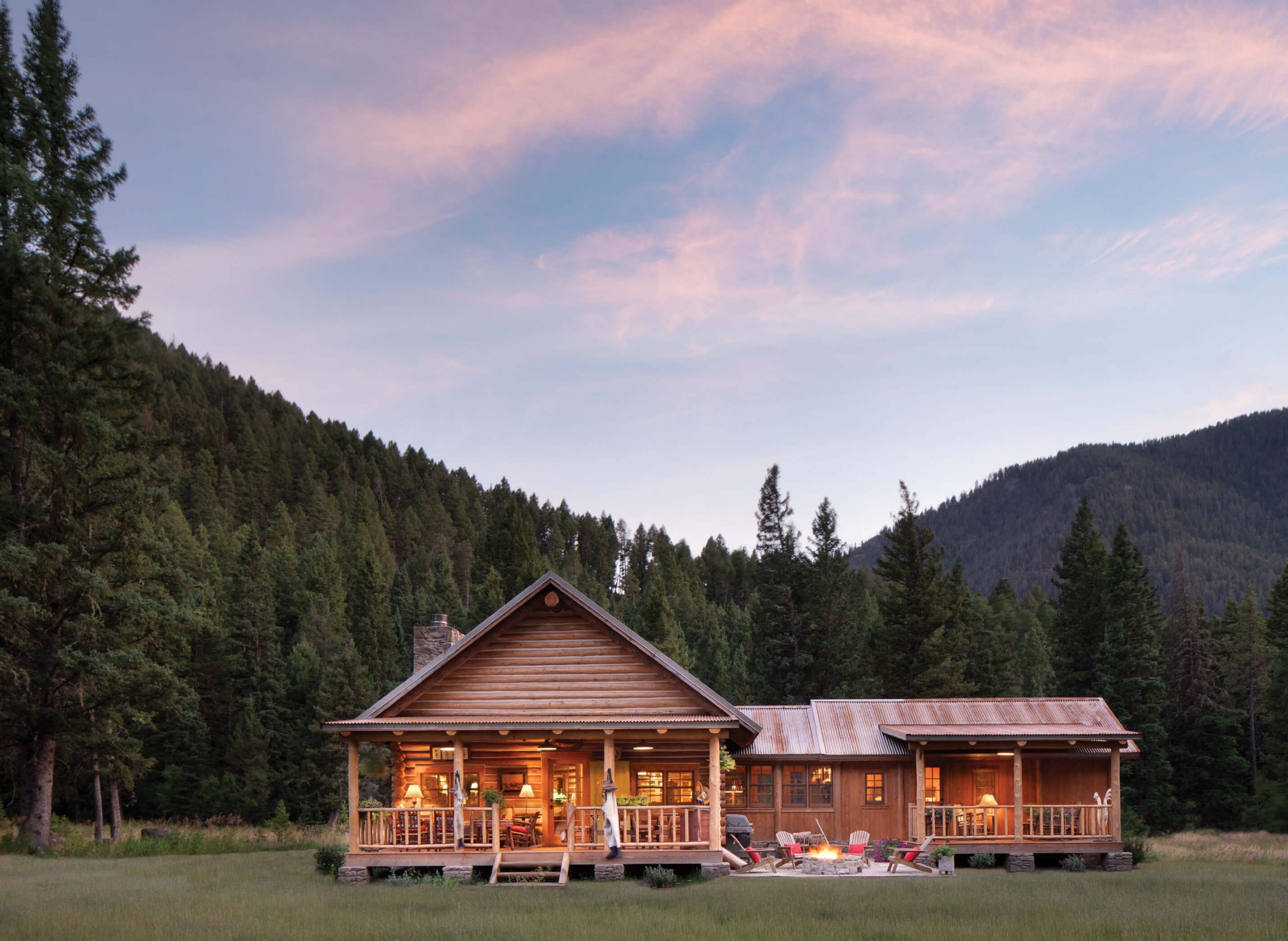 Lucky Davis’s studio is set up in a restored 1923 log cabin on his 18-acre property in Paradise Valley, Montana.

17 Sep In the Studio: The Essence of Place

Posted at 18:16h in In the Studio | October | November 2021 | Written by Corinne Gaffner Garcia | Photograped by Gibeon Photography 0 Comments
Share

Artist William “Lucky” Davis stands by the window in his restored 1920s-era cabin-turned-studio in Paradise Valley, Montana. He’s gazing out at an open meadow that leads to forested land and the Absaroka Mountains in the distance. The sound of running water — riffles from nearby Mill Creek — harmonizes with calling birds and chirping grasshoppers, creating a peaceful melody. Davis is trance-like; he’s thinking, observing, taking in the sublime scenery. Then, as if awakened from a dream, he turns to the easel next to him and adds some finishing touches. 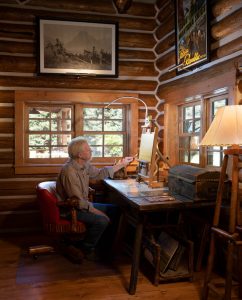 Surrounded by windows that offer inspiring views of the natural setting, Davis sits in a Molesworth chair and has his easel set up on an American 19th-century work table.

The landscape painting Davis is working on features a broad sky with trees in the foreground and grassy hills that rise into the horizon. It’s not a grandiose scene that he’s depicting — like the Tetons, Old Faithful, or a craggy peak in Glacier National Park — but it’s relatable, familiar, and just as dramatic in its own right. With muted tones and a hint of abstraction, it offers the same kind of serenity — one that only comes from nature. 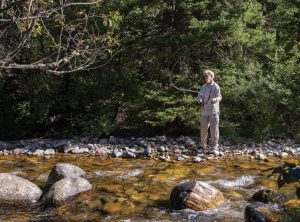 Davis takes a break to fly fish for native cutthroat trout on Mill Creek, which runs right outside of the cabin’s front door.

The combination of these soft colors and subtle abstractions makes up Davis’s signature style, which he refers to as “emotionalism.” His paintings emit a sense of calm, a mood that’s aligned with the artist’s laid-back temperament. “That’s what I try to evoke: a mood. That moment you look and think, ‘Isn’t that wonderful,’” Davis says. “I think when a person sees a scene of weather or Mother Nature, it evokes something internally.” 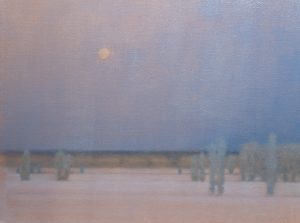 Also a self-described Tonalist, Davis works in oils, mixing a unique range of colors for each piece and focusing on subdued hues. “I work with a limited palette,” he says. “Everything I do, I mix for color, using primaries and whites and going from there.”

Davis cherishes the time spent in this studio, both painting and observing the views. And while he draws inspiration from his surroundings, the scenes he depicts are improvised. He doesn’t use reference photos or paint the landscapes set out in front of him. Instead, he draws from a collection of memories that swirl through his mind: childhood summers spent on his grandparents’ homesteaded ranchlands outside of Red Lodge, Montana; his experiences exploring the Beartooth Mountains near there; and the alpine environments that he has lived in around southwest Montana for much of his adult life. 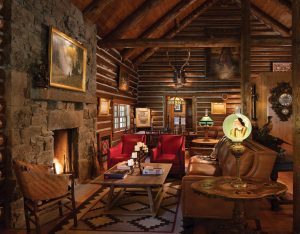 The cabin’s decor includes a wide range of European and American antiques.

“I don’t know where it comes from; I just paint,” Davis says. “Standing in front of the easel, it’s an abstract idea from a memory or a memory of an atmosphere. But it doesn’t always go in the direction that I think it might. I just go with it and see where I end up. It’s those things that I see in Mother Nature that I respond to; they’re not vast open landscapes but more like micro-settings.” 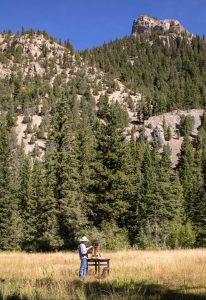 Near the cabin, Davis creates a plein air painting in a meadow that sits beneath Dog Tooth Mountain.

A fifth-generation Montanan with a lineage of homesteaders on both sides of his family, William Alfred Davis V was born on Friday the 13th, 1951, in Billings, Montana. When his father’s employer at a local furniture store — Cec Musburger (father of sportscaster Brent Musburger) — visited the hospital to offer congratulations, he took one look at the baby, who had a tinge of red in his hair, and came up with the nickname “Lucky.” Seeing that there were already four other William Alfred Davises in his family — which today includes a VI and VII — the moniker stuck. “Everybody thought that was a better name because the other was a bit stuffy,” the artist recalls. 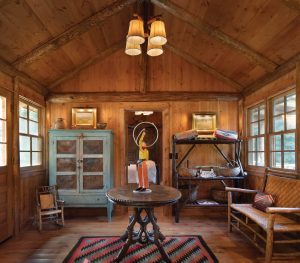 The cabin’s entry features a vintage blue pie safe and a collection of antique hickory furniture.

Davis’s affinity for art started when he was a young child and, without formal training, it’s been a hobby he’s pursued on and off ever since. “From the time I was 5 or 6 years old, I was always drawing,” he says. “It’s just something I’ve always done, but life takes you on different courses. I got married and had children, and those responsibilities dictated what I had to do.” 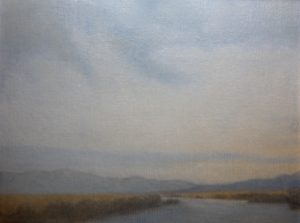 Still, the career he chose offered a creative outlet, and he and his wife, Ana Maria Torres, ran a successful furniture and interior design firm, Davis Torres Furniture Collection,   in downtown Bozeman for 20 years. After closing the store in 2010, the couple began buying rural properties, re-creating and restoring the historical buildings, and designing the interiors with collected furnishings, antiques, and art.

While these projects kept him busy, once the store closed, Davis had more time to pursue painting. And as luck would have it, what he perceived as a hobby — a pleasurable pastime that offered him a sense of peace — transitioned into another unexpected career when friends discovered his talent and felt certain that his paintings needed to be in front of a larger audience. “These dear friends provoked me to come out of the closet, so to speak, and they approached a gallery owner without me knowing,” Davis says. 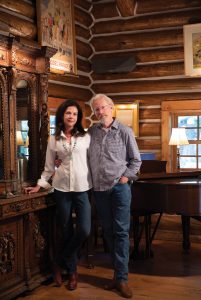 They approached Steve Zabel, owner of Montana Trails Gallery in downtown Bozeman, who was “immediately impressed,” says gallery director Maria Abad. “With Lucky, it really did feel like a stroke of luck. His style was very unique, and Steve knew his work would fill a niche in the gallery. His landscapes are so calm, ones you’ve seen throughout your life, and you can identify with them and with the colors. I love that he uses the primary colors and creates his own, and they’re so true, especially with the way he paints Montana’s big skies and the intrigue he creates through the hazy feel of things.” 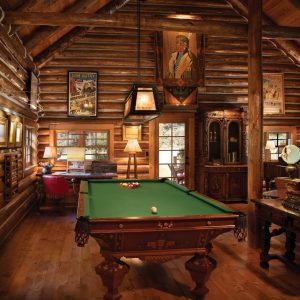 A highlight in the log cabin is an antique pool table that once belonged to William Clark, who was known as the Copper King of Butte, Montana.

Abad also explains that Davis’s work feels authentic because it reflects the artist’s demeanor, temperament, and mood. “He is one of the shyest artists I’ve ever met,” she says. “I think he was painting for himself, his own creative outlet. I don’t think he ever wanted to be an artist. And for us, as the only gallery that represents him, we’re incredibly proud. He doesn’t need a standing ovation, and I’m still not sure he realizes his talent. That’s who he is: As a person, he matches his paintings, and I think that’s so refreshing.” 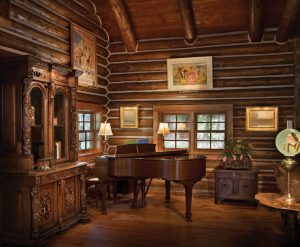 A Steinway & Sons piano sits in a cozy corner of the cabin and provides another creative outlet.

In his studio, Davis continues to find inspiration in his surroundings, and he takes time to paint most days of the week. “It ebbs and flows,” he says. “What’s good is that I can take breaks and plug into painting. And I also think it’s good to walk away from a painting. I don’t want to sit there and beat it up too hard. When I walk away, I can think about it, come back, and see something different.” Recently, he’s started working with bigger canvases, and a recent batch delivered to Montana Trails Gallery was extremely well received. 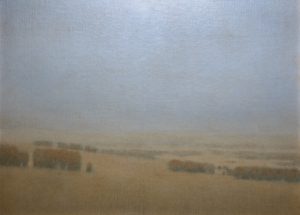 A good part of Davis’s time in the studio involves staring out the window in quiet contemplation, noticing the subtleties presented in nature and adding them to the memories he’s collected throughout his life; the ones he pours out onto canvas like a collage of landscapes he’s witnessed and connected with. “I’m blessed that I can live in a place like this,” he says. “I think I can recall the memories because of the calm I find here. Living in many rural places and having memories of my grandparents’ ranches, it all becomes part of your DNA. I was provoked to do this, and I feel blessed that I can sell my paintings and have such a wonderful creative outlet.”