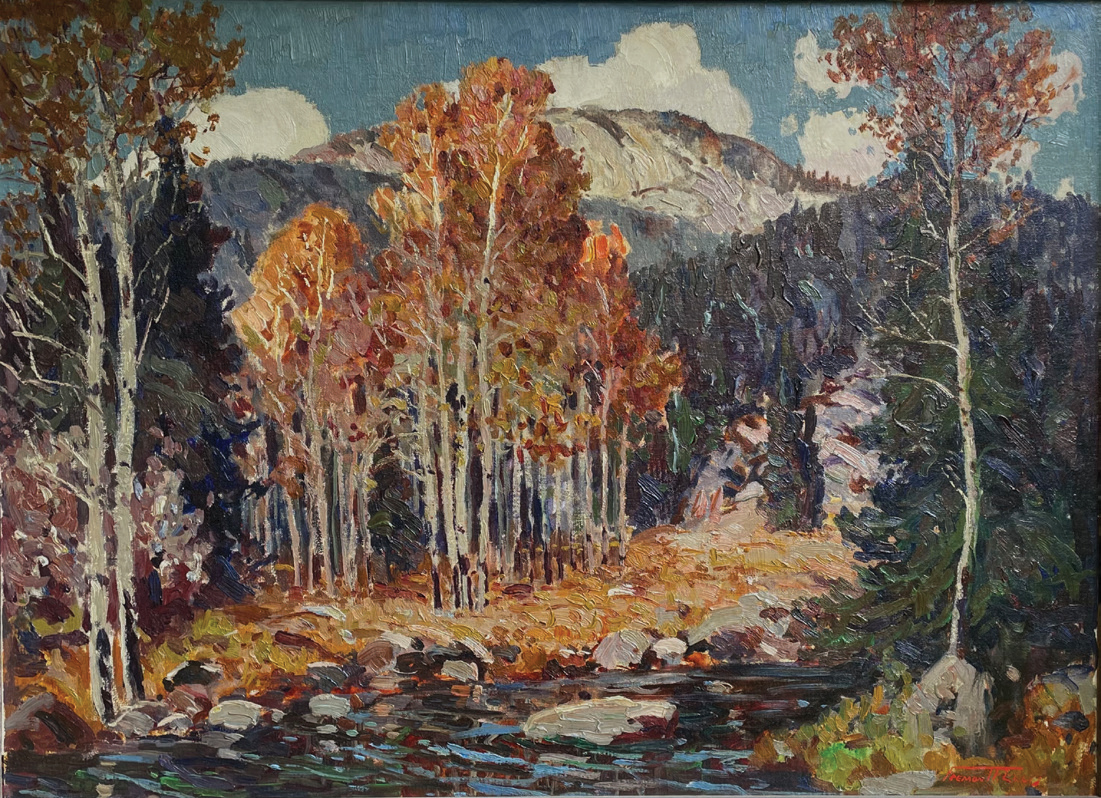 For almost 50 years, Fremont Ellis [1897–1985] painted some of the most vibrant scenes of the American West. Many of his creations were as vivid as the painting pictured here, and his confident application of paint lent a sculptural dimension to his art.

Ellis was born in Virginia City, Montana, and early in his youth he dreamt of being an artist. As a teenager, his family moved to New York City, where he visited the Metropolitan Museum of Art and was greatly inspired by Albert Bierstadt’s paintings. He subsequently studied for three months at the Art Students League but otherwise had no formal training.

In the summer of 1919, at age 21, Ellis first visited Santa Fe, New Mexico. He returned for good in 1921, and that fall, along with artists Jozef Bakos, Walter Mruk, Willard Nash, and Will Shuster, he founded Santa Fe’s first organized artist group, Los Cinco Pintores (The Five Painters). The group ran somewhat parallel to the Taos Society of Artists and is credited for founding the now-famous Canyon Road, a historic arts district in Santa Fe with more than 80 galleries.

Of Los Cinco Pintores, Ellis was the most traditional; he favored Impressionism’s vibrant palette and brushwork to capture Western landscapes. And like the French Impressionist Claude Monet, he often painted the same scene​​ in different seasons and under varying atmospheric conditions. In the fall, he was frequently spotted creating his melodic and vivid portrayals of autumn in Santa Fe’s canyons, and for these works, he became known as “the Aspen painter,” a title that he didn’t particularly appreciate for its limiting scope.

Ellis had notable success in 1924 when he was awarded the Henry E. Huntington Prize for best landscape from the Los Angeles County Museum of Art. He continued to garner awards throughout his long career, including a gold medal from the National Academy of Western Art in 1981. ​In one of his sketchbooks he wrote of painting, “Instead of trying to imitate exactly what I see before my eyes, I am using color in a much more arbitrary way in order to express myself more strongly. I believe I have been somewhat successful in attempting to capture and re-create the rhythmic vitality of nature.”

After a long and prosperous life (he painted more than 2,000 paintings), Ellis died on January 12, 1985, at age 87. The prolific painter continues to rise in popularity long after his death.