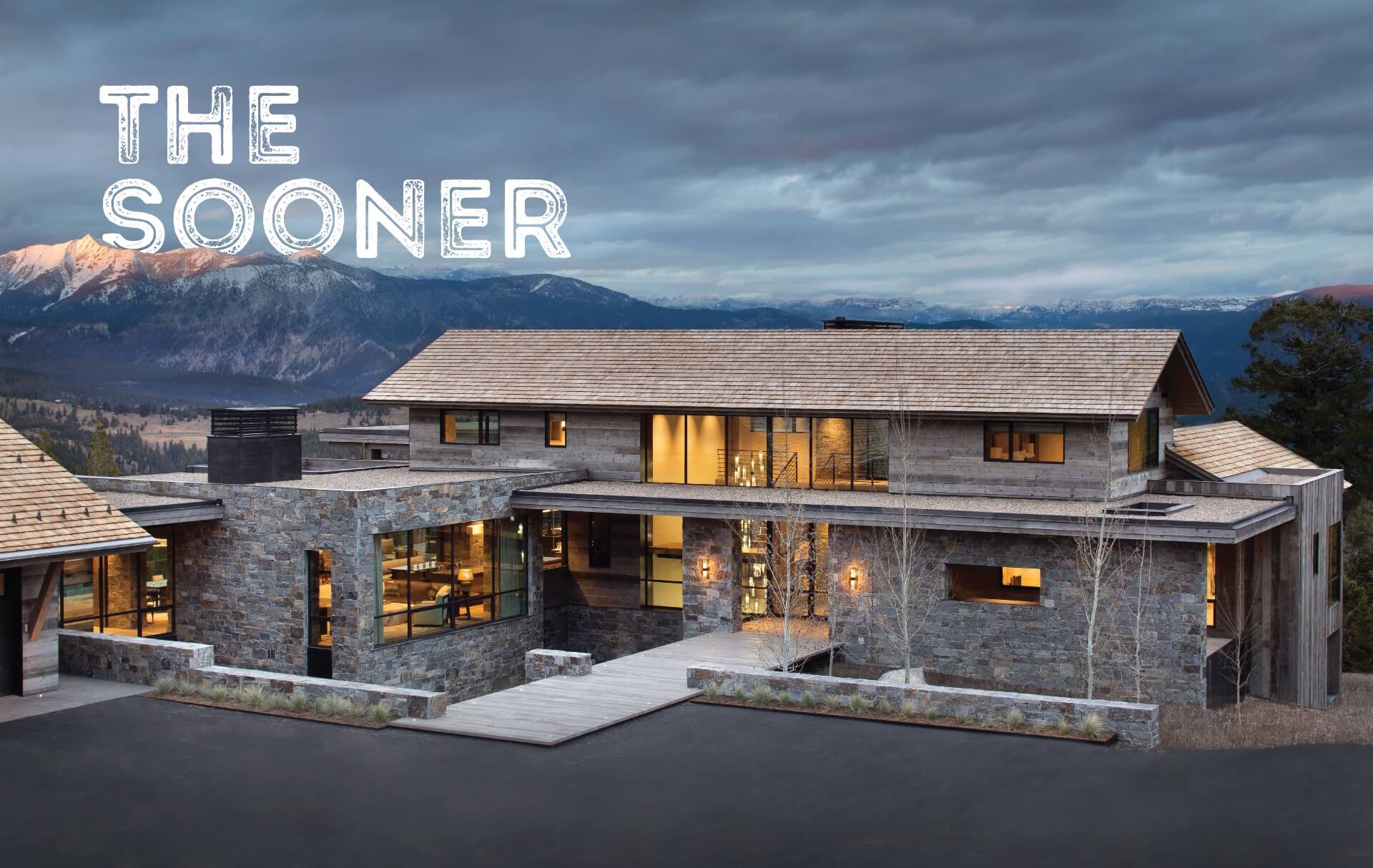 Views from the home take in Montana’s big skies and look toward the Spanish Peaks and the Gallatin Range. A layered and understated entry allows the two-story structure to unfold gradually, its materials and scale integrating with the surrounding landscape.

Montana architect Greg Matthews is on a roll. Less than two years after opening the doors to his five-person firm in Bozeman, Greg Matthews Studio, he has much to be thankful for. Leaving Pearson Design Group, an established company with a well-regarded reputation, wasn’t an easy decision, he says, but the opportunity to develop his own design legacy and clientele was too good to pass up.

His path to this point has been circuitous at best. After a brief collegiate career playing baseball and golf, and armed with a computer science degree and a drafting certification, Matthews gained traction in Pearson’s emerging firm, and in 2007, with no formal training in architecture or design, he was made a partner. Five years later, with bachelor’s and master’s degrees in architecture under his belt, Matthews became a licensed architect. 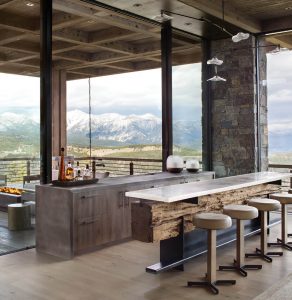 The bar is the irresistible centerpiece of the great room. Built from a singular piece of timber salvaged from an old pier and accompanied by swiveling Walcott stools from KGBL, it’s located near sliding doors that open to an exterior deck.

In 2019, Greg Matthews Studio was born. Bozeman was sizzling in real estate speculation, fueled in large part by the Yellowstone Club, a 13,600-acre private ski and golf community located in nearby Big Sky. When larger design firms started turning away work, Matthews saw an opportunity. “I wanted to control the caliber of the work and truly enjoy the process,” he says.

As it turns out, his first project — one that he had started while still with Pearson Design Group — was an 11,000-square-foot home for an Oklahoma couple who already had one house in the Yellowstone Club. Overlooking the 18th hole of the Tom Weiskopf-designed golf course, their new home nestles in the treetops at 8,000 feet. Its big windows and wraparound outdoor spaces take in views of the Spanish Peaks and the Gallatin Range in the distance. It’s called “The Sooner” in reference to Oklahoma’s nickname but also, Matthews explains, because in the blitz to settle Oklahoma Territory prior to the Land Rush of 1889, “there were ‘sooners,’ and there were ‘boomers.’ Sooners got the premier property, and boomers got whatever was left.” 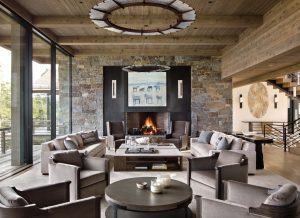 Lending structure and order to a space defined by the view, the interior designers sectioned the 40-foot-long great room into three distinct areas. An abstract painting by Montana artist Theodore Waddell offers a subtle splash of color in a room with neutral tones and textures. Bibliophyllum, a 54-by-96-inch vertical wall installation by Jessica Drenk, is made of thousands of pieces carved from wax-embedded books.

The homeowners are accustomed to a full house with three college-age children, and they love to entertain. From the start, their new home’s architectural program focused on accommodating groups of friends. The kids’ bedrooms, a large game room, and guest rooms are located upstairs and down. Public gathering spaces (indoor and outdoor living and dining areas) orient toward the views while the master bedroom, private and quiet, tucks away from the activity. A significant challenge, explains Matthews, was “to make the home not appear as large and as grand as the program would lead you to believe.”

Paramount to that process was the creation of a welcoming and scaled-down entrance in which Matthews used the vertical grade found in the foothills of the nearby Spanish Peaks as his creative inspiration. The two-story entry facade recalls the mountains with vertical and horizontal planes. A wide and welcoming walkway interspersed with low stone seating walls creates distinct thresholds that reference specific relationships between interior spaces and the vast and rugged Montana landscape beyond. 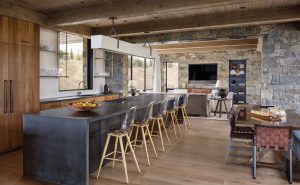 A 17-foot-long poured-in-place concrete monolith informs the kitchen’s design. The family room is visible in the distance, while a small breakfast banquette is tucked into a corner.

Matthews says that typically most clients come to the table with traditional ideas about design and spatial planning, which is unsurprising given the historic roots of the region’s distinct architectural vernacular. “It’s interesting how many clients say they want a classic, traditional home. [But] as soon as we show them how flat roofs, exposed steel, clean finishes, and open floor plans can actually accentuate a complete and seamless connection with the surrounding landscape, they immediately gravitate toward it,” he says.

While no one style or aesthetic defines his work, he admits that the traditional forms associated with mountain architecture tend to handcuff his creativity. When his clients challenge his ideas, he reminds them that they live in an environment that is covered in snow seven months a year. Suddenly, dark log interiors punctuated by small windows and segmented living spaces aren’t as appealing. 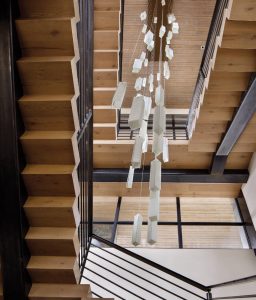 A cascading fused-glass chandelier from Shakúff Custom Lighting hangs in the three-story stairwell.

Designing a home in the mountains of the American West typically begins with considering the site to ensure that the indoor and outdoor living spaces take into account sun exposure, wind direction, and views. The Sooner is no exception. The mountains are so majestic, explains Connecticut interior designer Alicia Orrick of Orrick & Company, that “we needed to create a highly ordered plan at a muscular scale.” What that means, essentially, is that everything, from the interior and exterior living spaces to the furnishings, was designed at a scale to match the landscape.

Take the great room, for example, a room that frequently creates challenges for architects and interior designers because, Matthews says with a laugh, “it simply never gets used.” Mid-stream in the design process, he recalls, “we changed gears with the sole purpose of focusing on making the great room irresistible. How do we make people gravitate to this space?” His solution? Make the bar the centerpiece. 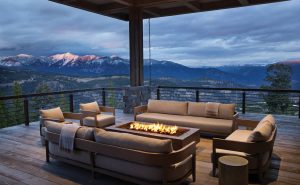 The covered exterior deck provides a comfortable spot to take in the alpenglow on Wilson Peak.

The great room is enclosed by floor-to-ceiling walls of glass on two sides. The 40-foot-long room needed a sense of order, explains Orrick, so she divided it into three sections, similar to a hotel lounge. Anchored by the bar on one end and intimate fireplace seating on the other, guests are drawn toward the center of the room, where a round table with four swivel chairs and two oversized sofas (almost 10 feet in length) flank equally hefty coffee tables. This seating area is key to the success of the space, explains Orrick jokingly, because “men love being able to swivel around and talk to one another.”

The first time the homeowners came to the house after it was completed, they invited five couples. “We had 12 people milling around in the great room, and there was more than enough room for all of them to hang out comfortably in the space,” Orrick says. 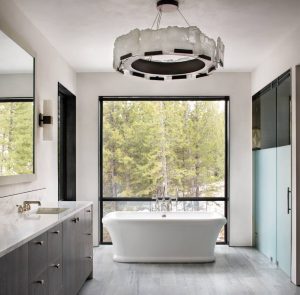 A free-standing tub by Waterworks in the homeowners’ bathroom is framed by a floor-to-ceiling view of the landscape beyond.

The bar sits under floor-to-ceiling steel-framed windows that slide from the center outward, allowing access to the large deck. It’s made from a solid piece of reclaimed timber that’s perched on a steel plinth and topped with a monolithic, 1,000-pound rectangle of glass that magnifies the weathered features of the wood, effectively transforming it from a piece of recycled lumber into a work of art. For Matthews, the bar is the statement piece of the room. With a dash of humility, however, he admits that creative ideas are only as good as their execution. “Todd Thesing and his team of builders at Highline Partners turned a dream into reality,” Matthews says.

No stranger to challenging design problems, Thesing likens the process to extreme sports, adding that Matthews’ consistent creativity kept his team sharp. “Greg is always pushing the envelope,” he says. “If we say we can’t do it on the first try, we know he will deliver another game plan that’s even more creative the second time.”

Colors and textures throughout the home’s interior are decidedly understated to let the view take center stage, explains Orrick. Fine art photography, much of it captured by one of the homeowners, an accomplished photographer and recipient of the prestigious gold and silver medals from the Prix de la Photographie Paris, abounds throughout the home. A 60-by-60-inch abstract painting of horses by Montana artist Theodore Waddell presides over the great room fireplace; its ethereal blue and gray brushstrokes illuminate the contemporary panel of dark steel surrounding the fireplace. Another equally robust contemporary piece, titled Bibliophylum, by native Montanan Jessica Drenk, hangs just inside the front door. Over a period of three days, the artist pinned thousands of individual pieces carved from wax-embedded books to the wall in loosely organized groupings of color, size, and shape to create the 54-by-96-inch vertical wall installation. 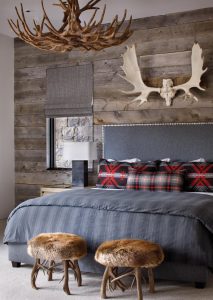 Guest bedrooms, including this one on the lower level, are imbued with the colors and textures distinct to the surrounding Montana environment.

Sophisticated details combining the home’s primary materials of wood, stone, and steel create seamless connections to enhance the functional flow while calling attention to the artful craftsmanship inherent in the design. Walls clad in a veneer of finely honed Montana stone create partitions between the dining room, kitchen, and family room. A suspended steel fireplace with a transparent glass firebox that opens to both sides separates the family room from the dining room, creating both a physical and visual connection between the two spaces. A 17-foot, monolithic, poured-in-place concrete island forms the centerpiece of the kitchen — a space Orrick describes as really more focused on entertaining. “The main kitchen remains fairly quiet and neat,” she explains, “while the actual work happens in another kitchen that is out of sight of the entertaining space.”

The home’s interplay between interior and exterior, light and shadow, and the casual elegance of spatial volume is immediately evident in the front entry, where a three-story stairwell, featuring floating stairs of white oak and a cascading light fixture made of rectangular pieces of frosted glass, effortlessly connects bedrooms above and below with the home’s main living space. “Not only is there an airy flow between rooms, but also from floor to floor,” says Orrick. “There’s a lot of privacy in the home, but in this space, you have a sense of movement and activity.” 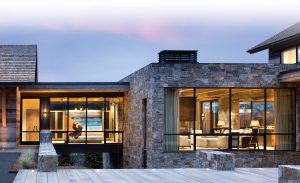 Visible through the large windows, a partition wall is clad with a decorative buffalo textile by Kyle Bunting.

For his part, Matthews believes design exists to tell a story. “Reading between the lines is what makes a good architect,” he says. In the case of The Sooner, the design, a clever mix of sophisticated craftsmanship and a casual floor plan, allows the owners to live comfortably in the wide-open spaces. Ultimately, that’s what Montana is, he says, adding, “These are landscapes where you go to escape.”